The Earthship is an autonomous self-sufficient house built with natural and recycled materials with energy conservation in mind. Designed to produce water, electricity, and food for its own use, Earthships are defined by six basic design principles, all of which take advantage of the existing natural phenomena of the earth: building with natural and repurposed materials, using thermal and solar heating and cooling, solar- and wind-generated electricity, water harvesting, contained sewage treatment and self-sustained food production. 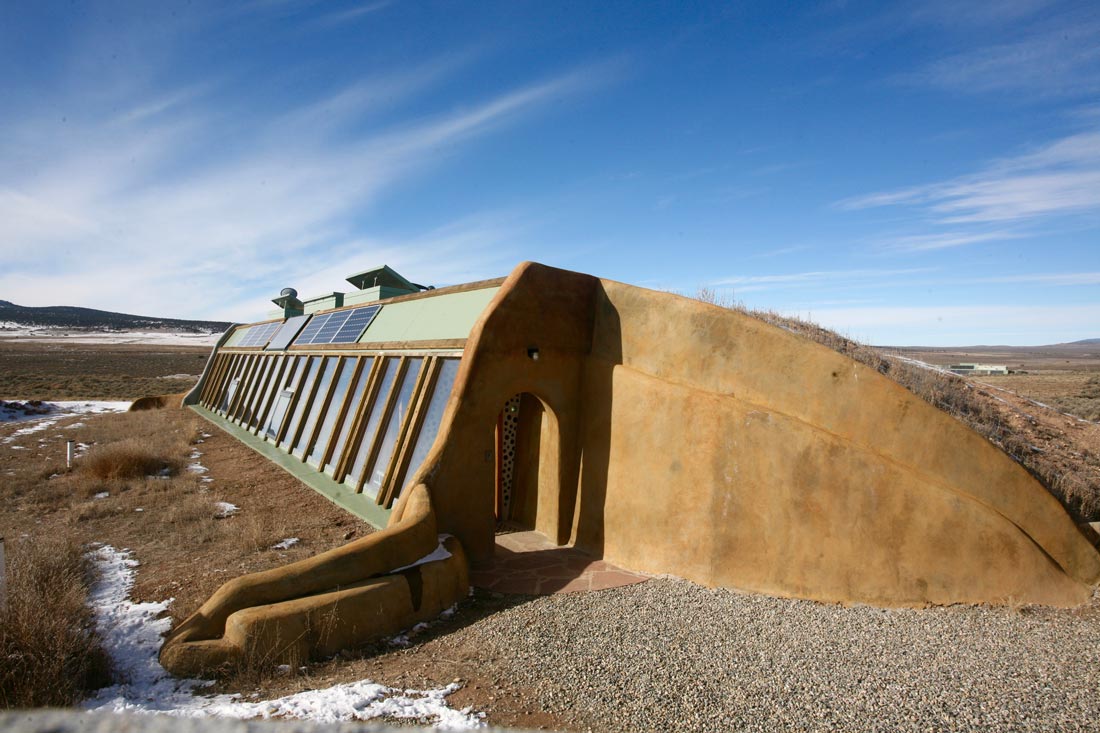 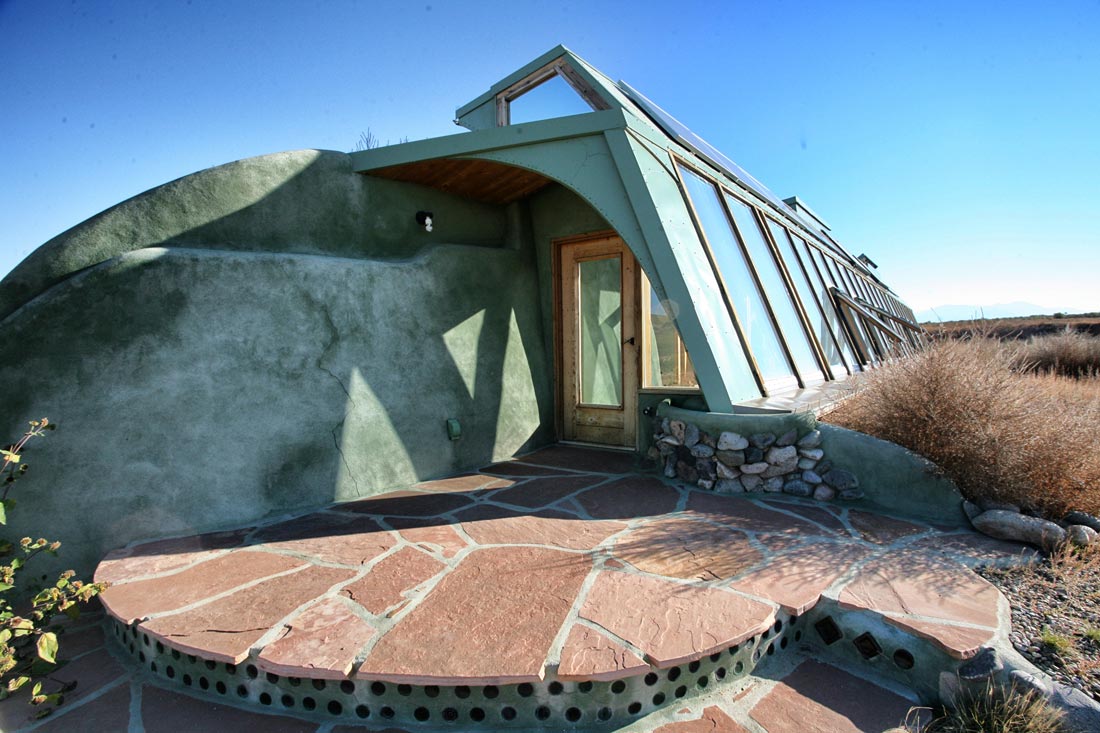 BUILDING WITH NATURAL AND REPURPOSED MATERIALS

Earthships incorporate many natural and reclaimed materials in their construction. Tires are the perfect form for a rammed-earth brick. There’s no shortage of used tires—at least 2.5 billion are currently stockpiled in the United States, with 2.5 million more discarded every year. Tires can be seen as a globally available “natural resource.” Other materials such as cans and bottles are optional, although bottle brick walls are a familiar stand-out feature of many Earthships. All interior walls are packed out between the tires and plastered with adobe mud. Mud can also be used for floors, and reclaimed wood and metal are often used. 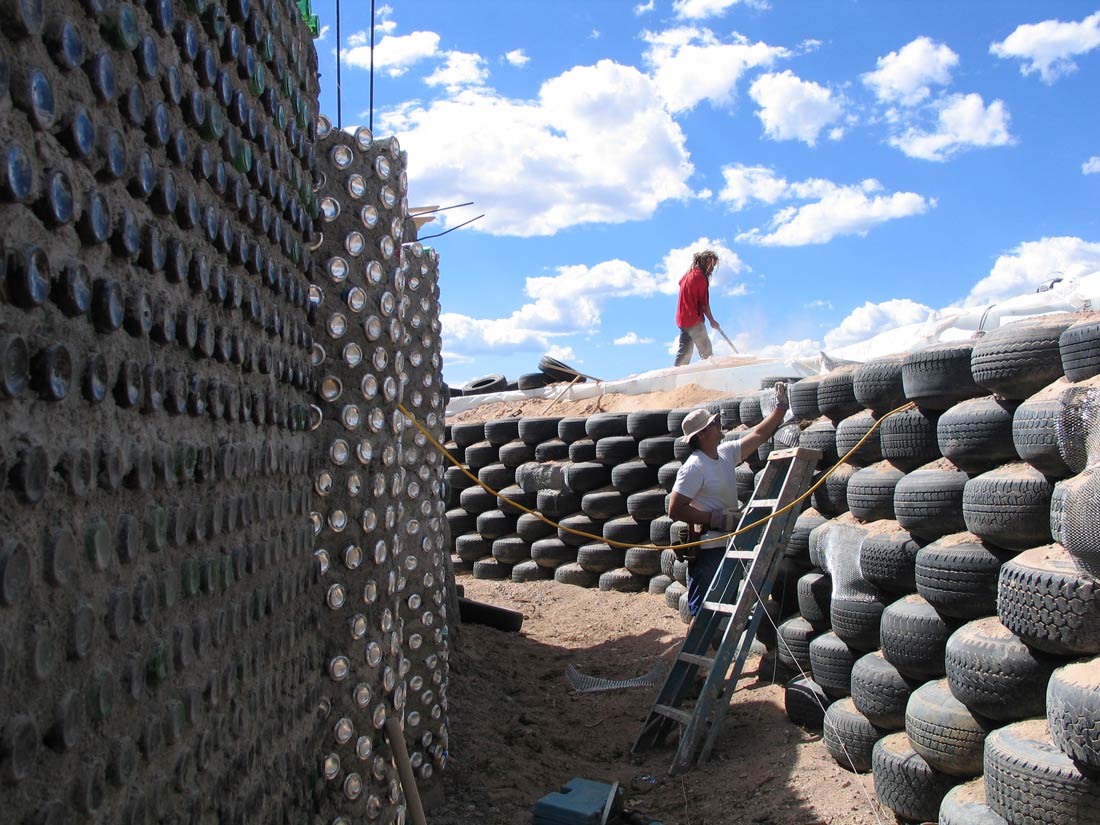 At their most fundamental, Earthships are structures that heat and cool themselves without electric heat, burning fossil fuels or wood. Thirty percent of all energy that is produced in the world is used for heating and cooling buildings. By using thermal mass and solar gain, Earthships are capable of maintaining a comfortable temperature without additional fuels in any climate in the world. The structural walls of the building are formed with used automobile tires packed tightly with earth. These thermal mass “bricks,” which weigh about 300 pounds each, are pounded into place and staggered like bricks to form the load-bearing walls for the roof. The tires are also wide enough to eliminate the need for a concrete foundation. The densely packed walls, considered to be self-supporting monolithic walls, also store temperature (heat or cold) because their solidity imbues them with the quality of thermal mass. The basic idea is to surround each living space with mass on three sides and line the south side of the building with windows. Sun enters through the glass and heats up the mass of the floors and walls. In the evening, when the air temperature drops below the stored wall temperature, heat is naturally released into the space. In the summer, with the sun high in the sky, the building stays cool with the constant temperature of the earth.  We enhance the cooling with natural ventilation through buried cooling tubes and operable vent boxes. 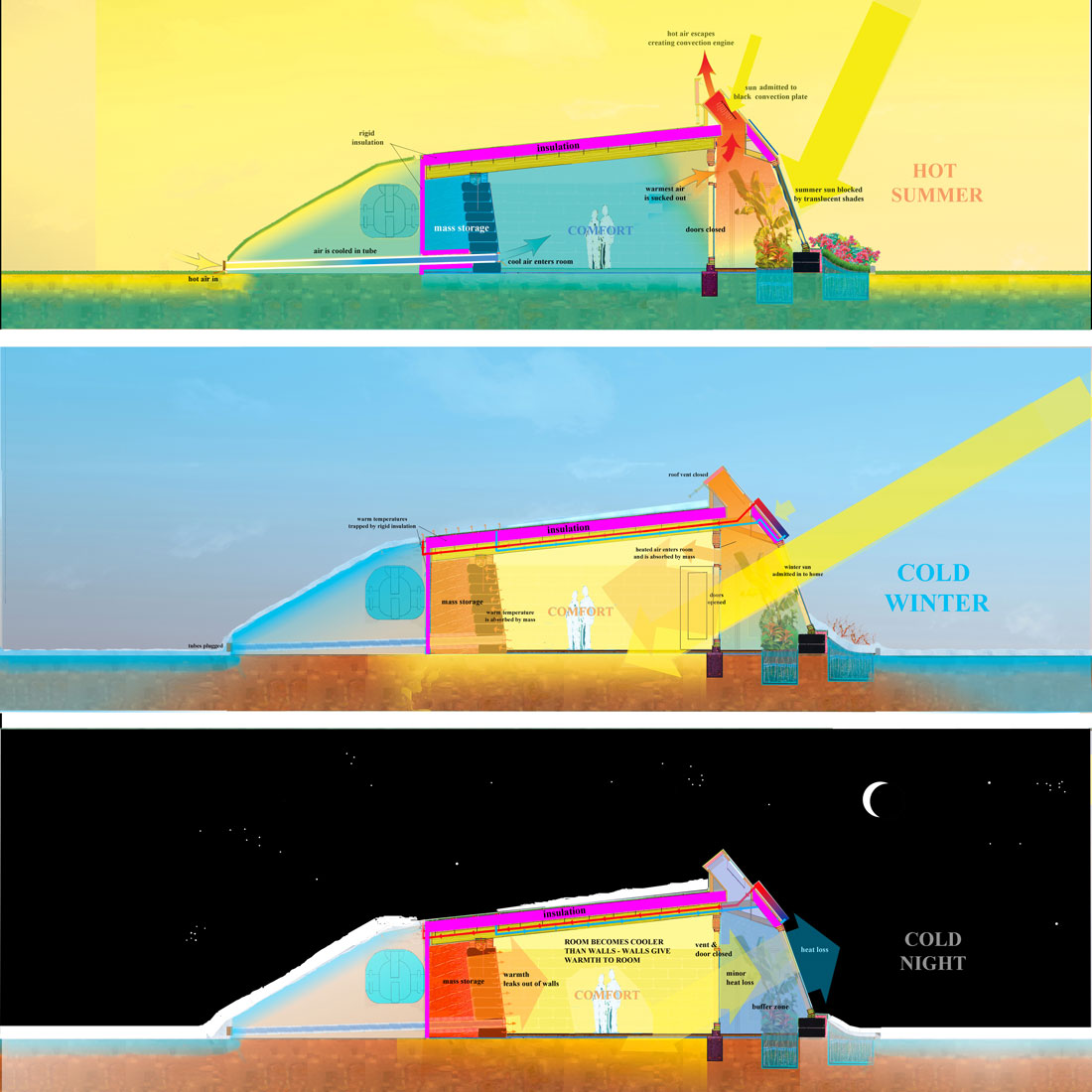 Every building has its own renewable “power plant” with photovoltaic panels, batteries, charge controller, and inverter. The key step in making these systems affordable for residential use is to “design down” the electrical requirements of the home before the solar system is sized. Super efficient lighting, pumps, and refrigeration help lower the load, as does the lack of any need for electric heat or air conditioning. Add in daylight from the windows and skylights and a keen awareness of trickle drains and phantom loads, and an Earthship’s electrical needs are about 25 percent of that of a conventional home. Most residents can meet their demand with one kilowatt or less of energy from solar panels. Some also opt to add a small windmill to the system for gray, stormy climates. 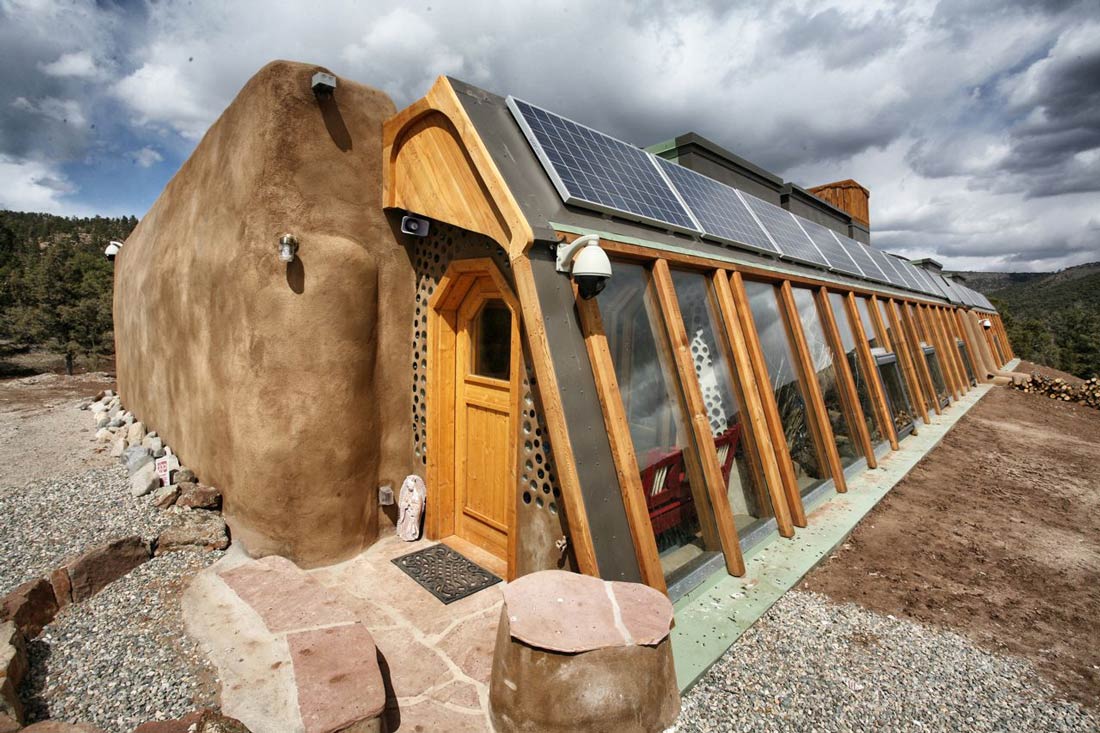 Earthships collect all of their water from rain and snowmelt on the roof, storing this water in cisterns. (Each inch of rain collected from a square foot of roof equals 2/3 of a gallon of water. Multiply that by the total square footage of the roof and number of inches of rain per year, and you get your total possible collection.) Water from the cistern feeds a pump and filter system that cleans the water and sends it to a solar hot water heater and also to a pressure tank. From there, water is used for bathing, washing dishes, and laundry.

The used gray water flows to interior botanical cells, where plants use up and treat the water until it’s clean enough to be collected in a well at the end of the planter and pumped, on demand, to the toilet tank for flushing. (Forty percent of water used in a conventional home is for toilet flushing.) The toilet water then goes to a conventional septic tank, which overflows into an exterior rubber-lined botanical cell filled with exterior landscaping plants. Every drop of water that lands on an Earthship roof is used four times, so homes can subsist and even thrive without taking water from the ground or municipal sources. 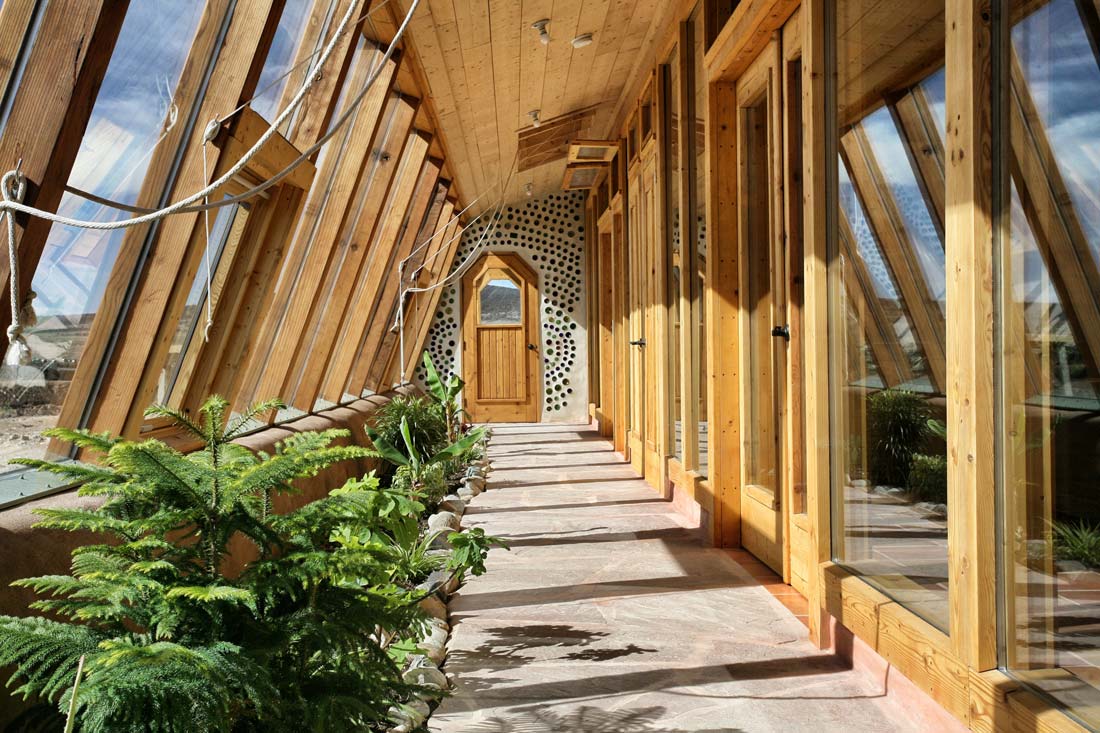 Interior, in-home, organic food production is the most recent design principle added to the Earthship concept. Earthship Biotecture employs a plant specialist who has experimented with the best plants for the interior gray-water botanical cells. She has also designed mini-hydroponic planters in suspended buckets that have added vertical growing space in the greenhouses and have tremendous yields of herbs, peppers, tomatoes, kale, beets, cucumbers, and more. The Earthship Visitor Center features all of these food-producing plants, and staff members regularly enjoy fresh produce straight off the vine. Aqua-botanical systems in the newest Earthship enhance food production capabilities with fish and nutrients from their waste. 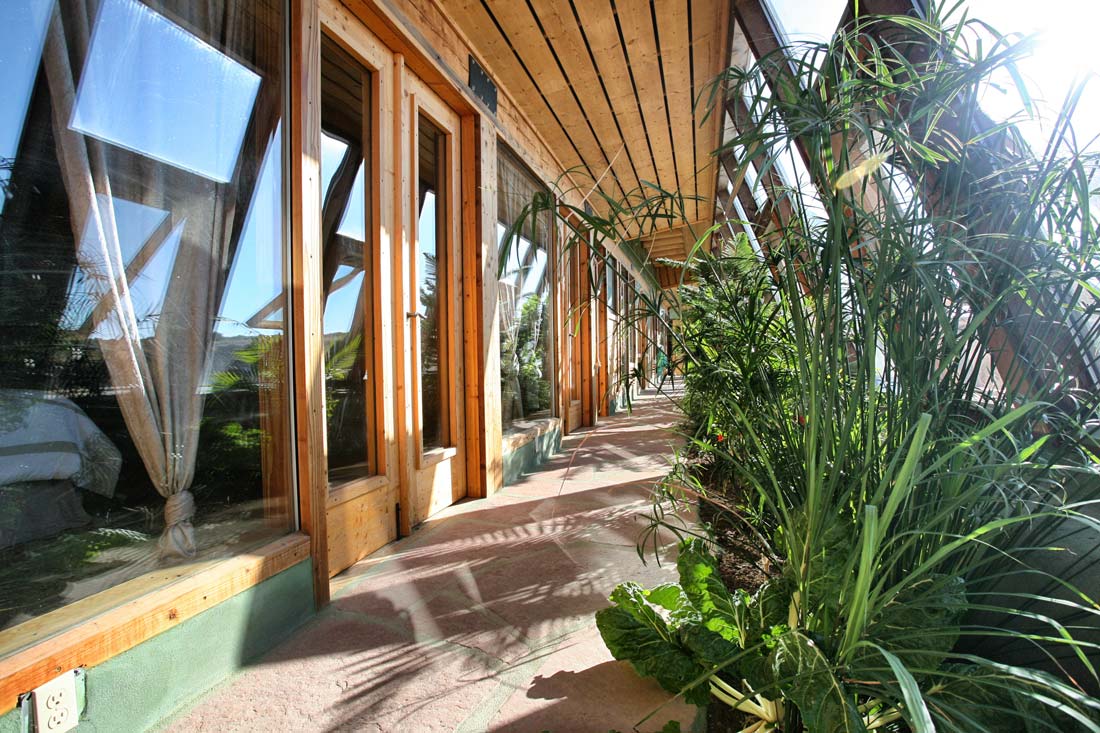 The Global Earthship design performs in almost any climate around the world. The main features of this design include a double layer of glass (“double greenhouse”) between the inner living spaces and the outside and the use of underground cooling tubes and convection skylights which work together to provide ventilation and natural air conditioning for the building.

Global Model Earthships have been built in France, Germany, Mexico, Canada and across the United States. 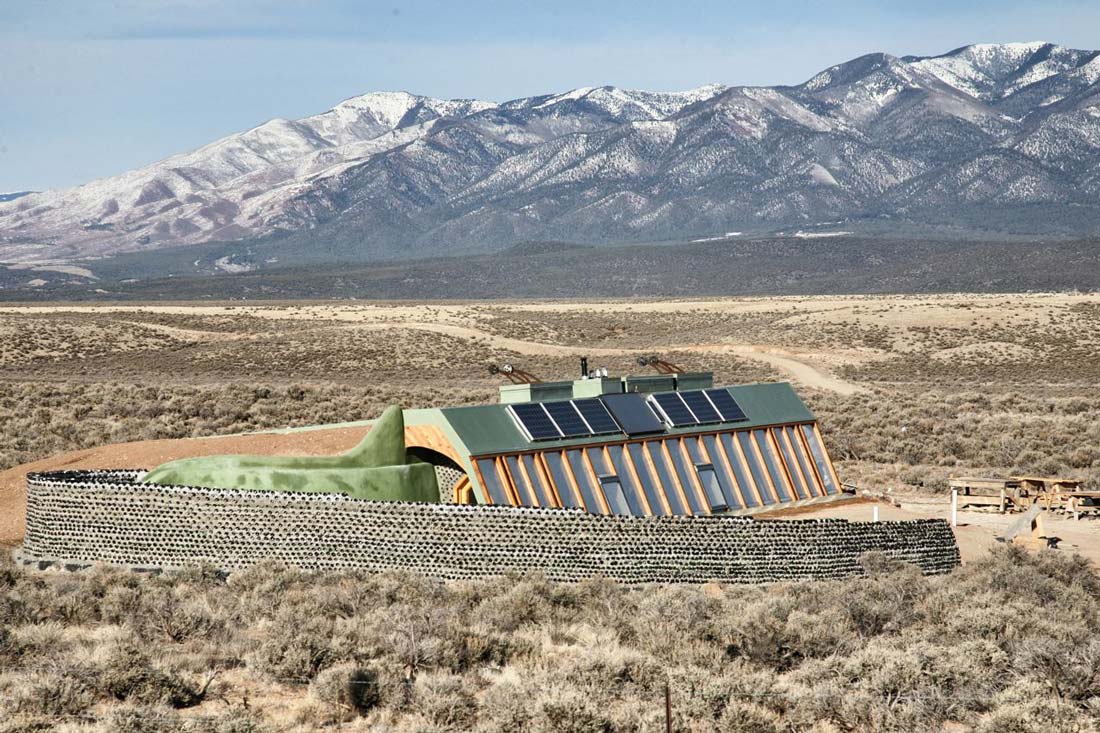 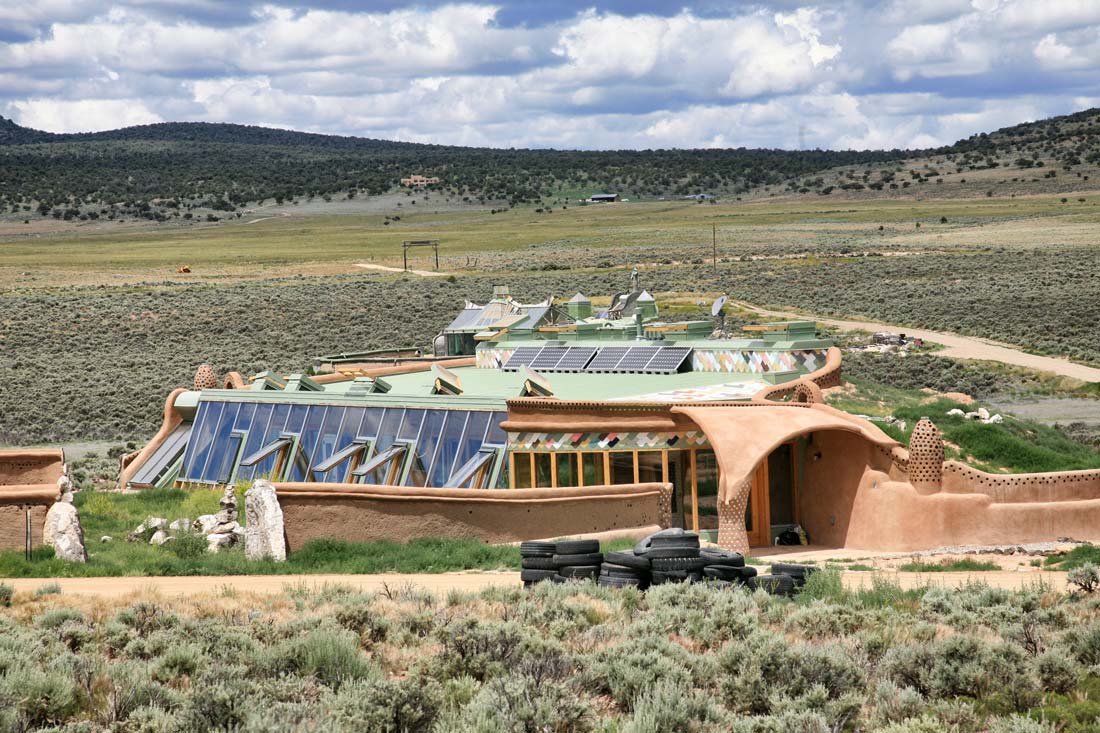