Driven by a lack of space, the Gerrit Rietveld Academie and Sandberg Instituut ordered the construction of a complementary third building on the grounds, opposite the building designed by Gerrit Rietveld and next to the expansion by Benthem & Crouwel. The resulting campus provides this leading art school with a new setting. 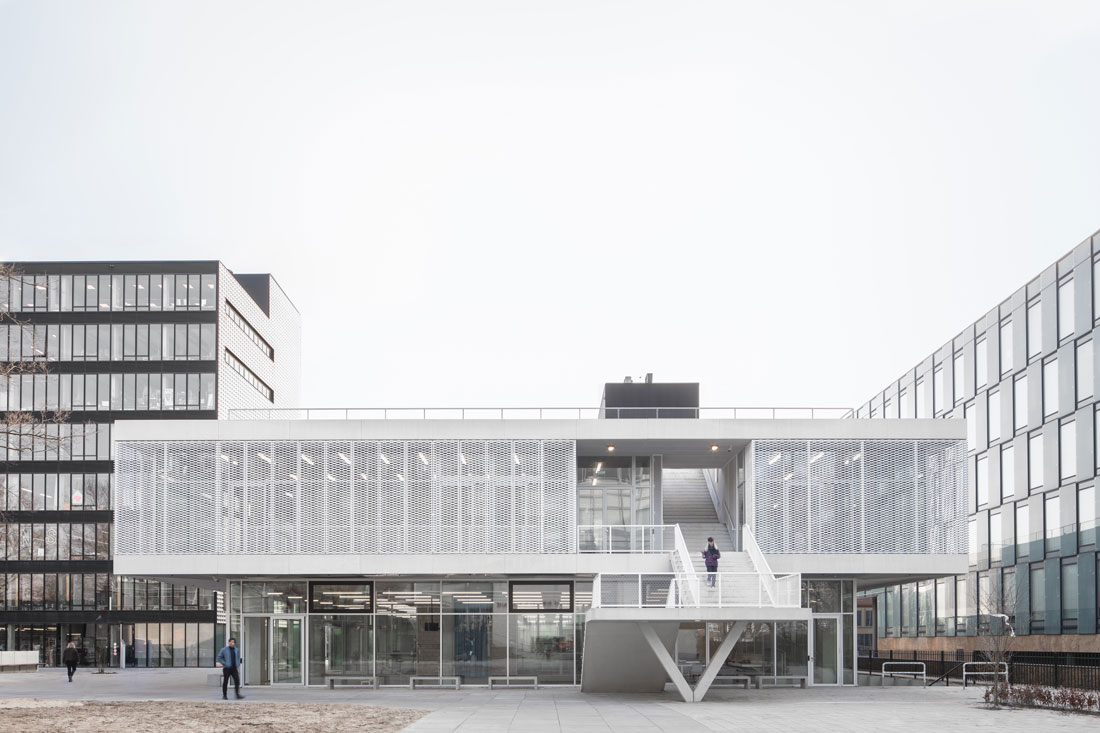 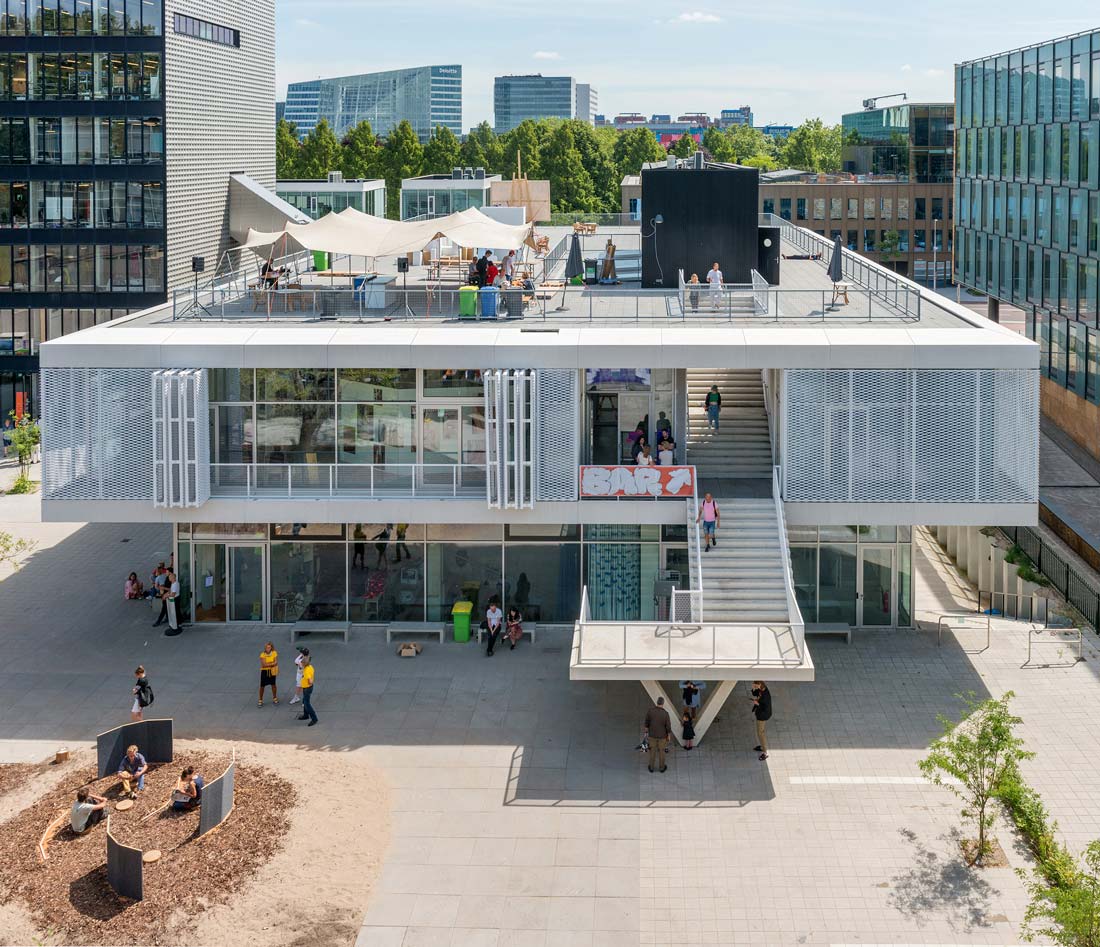 With regard to the selection of the architects, the art academy decided to stay close to the character of the community and launch an in-house competition. Fedlev won. This cooperative of designers has turned its user expertise into a concept. “Experimentation is key at the academy. This essentially means looking across borders and disciplines. The autonomous departmental culture of the academy didn’t contribute enough to an interdisciplinary way of working,” says architect and Fedlev initiator Paulien Bremmer. The starting point for the expansion was a scenario for the creation of a collective interdisciplinary educational environment. The result is a landscaped building: a backdrop for making, meeting and exchange. 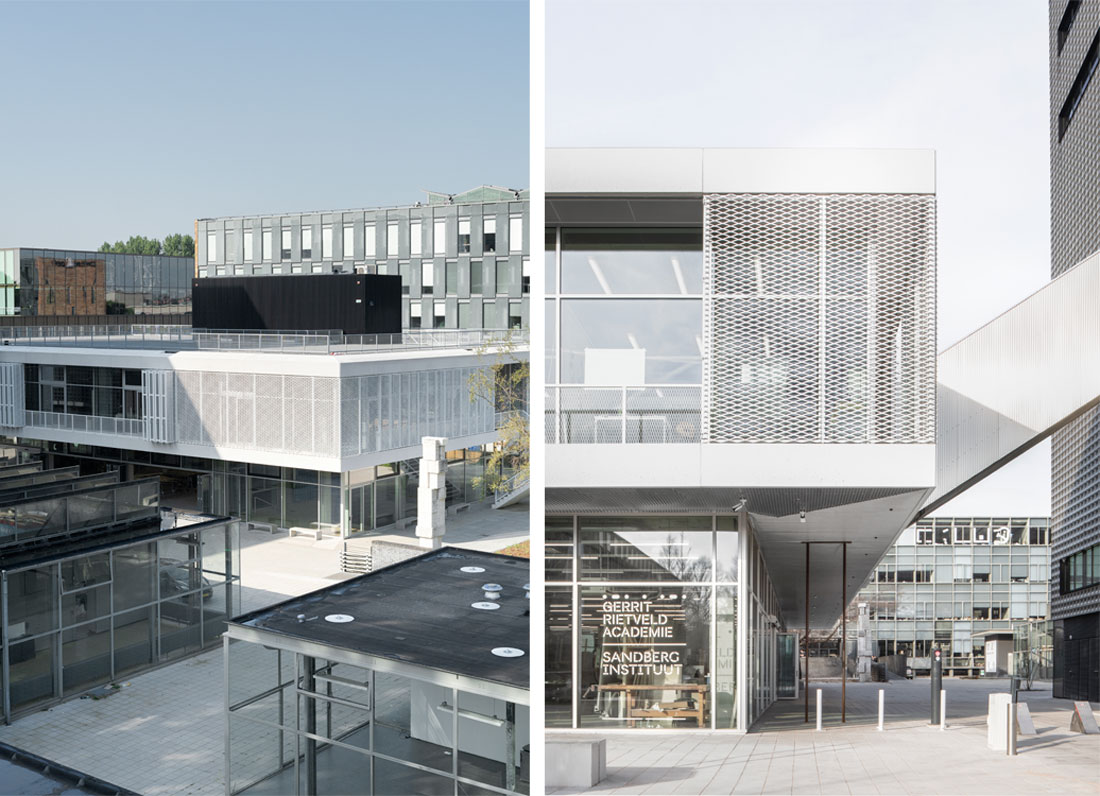 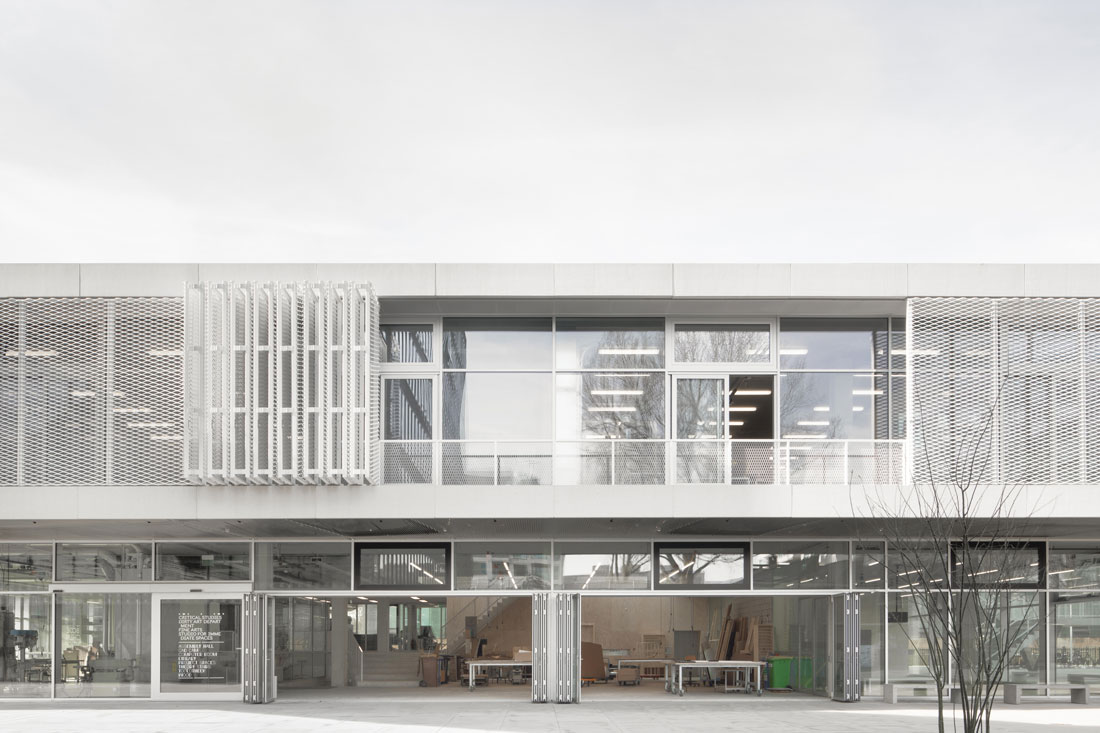 Interaction as a Starting Point

In the preliminary design stage, Fedlev entered into a partnership with Hootsmans architects. The new building, completed in January 2019, has a rectangular floor plan and consists of three levels, one below ground level and the top one cantilevered. Next to each other on the street side are the woodshop and the library. The spaces on the first floor are earmarked for students of the Sandberg Instituut. Other spaces in the building are shared, including facilities such as the assembly hall, the auditorium and the film studio. 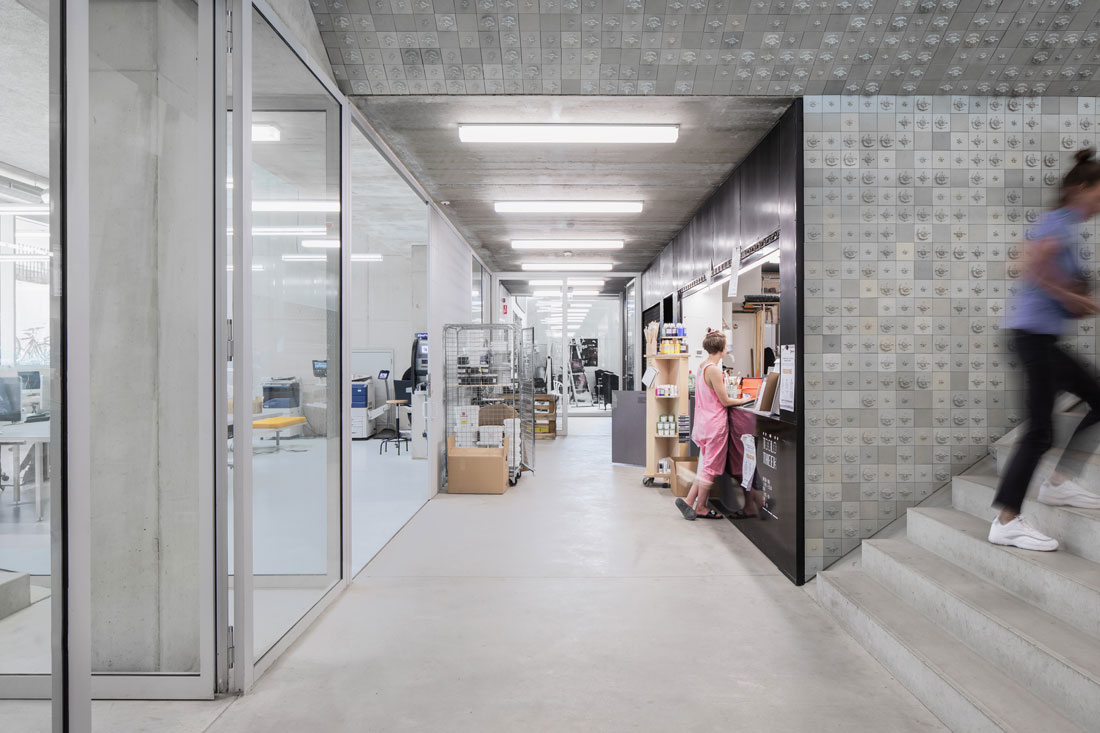 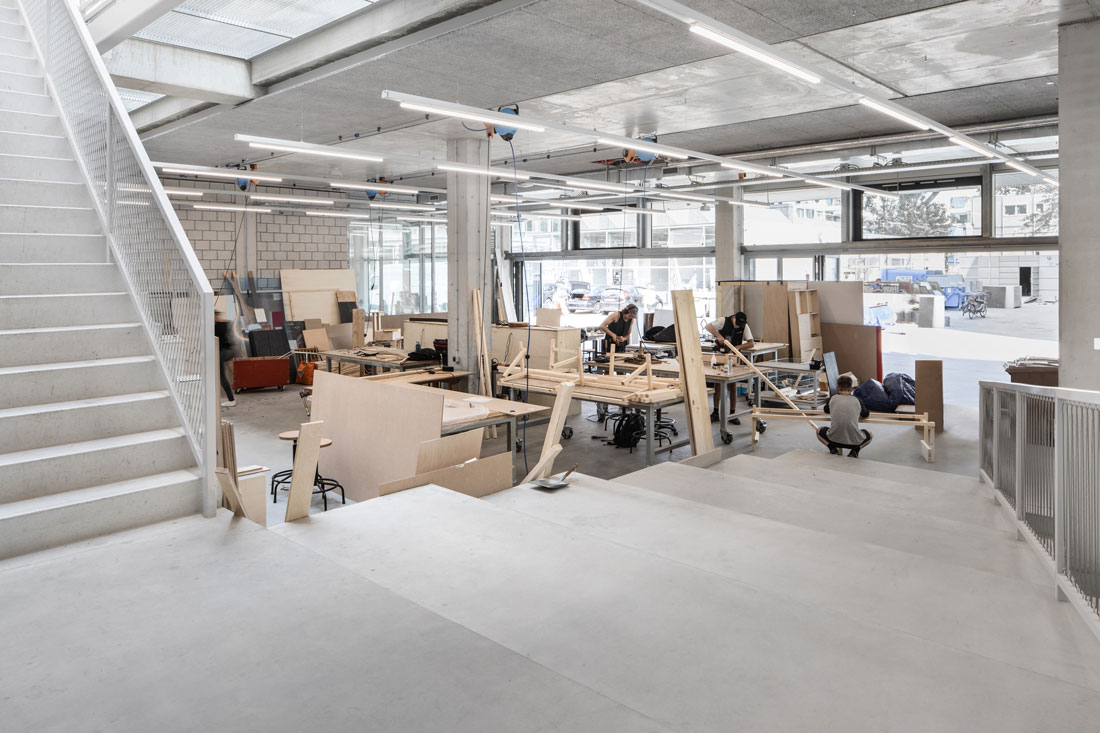 At the ground level, a modest reshuffle of the existing buildings’ programs made room for a shared space around the base of the building. The extension’s glass façade can be opened in many places, facilitating interaction in the space between the buildings. A communal roof area that is suitable for exhibitions, performances and the installation of temporary constructions compensates for the space occupied by the extension on the ground floor. To stimulate interdisciplinary activity, the architects created project spaces on different floors throughout the buildings. The spaces offer students the opportunity to work and experiment freely, separate from the departmental structure. 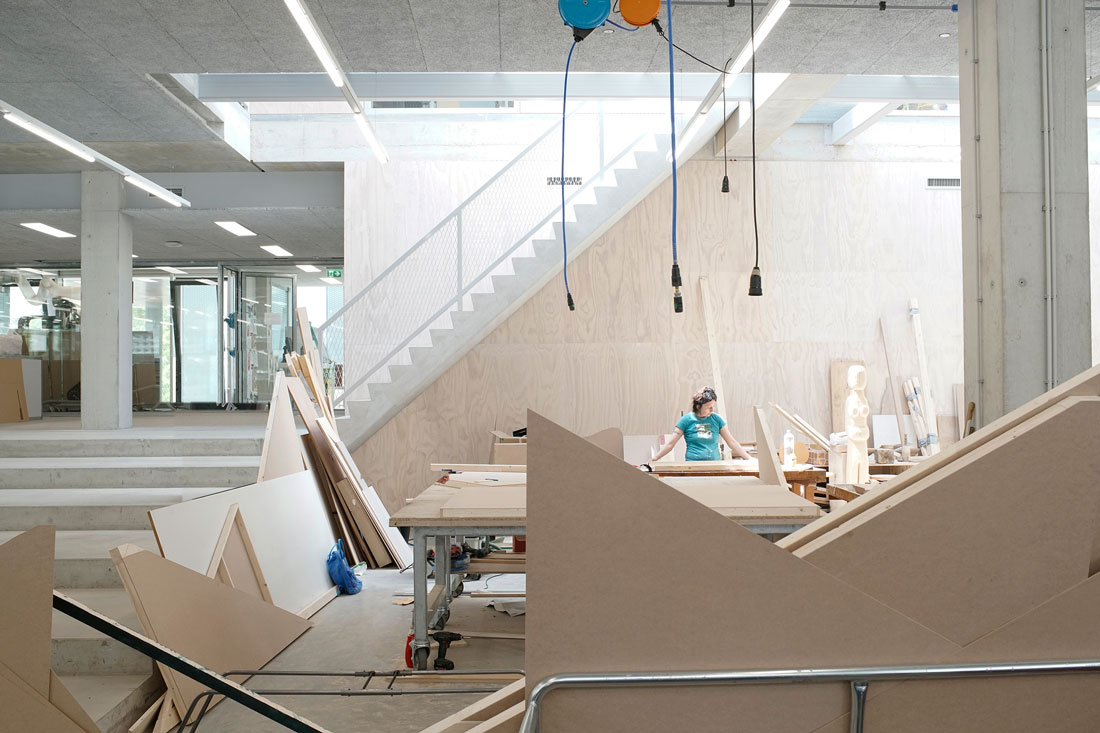 Part of a landscaped spatiality, the building’s floors and functions are connected in various ways. Transparency and visual links characterize the interior. There are no stairwells or corridors, which means the making process is always visible, and interdisciplinary exchange is always possible. Introducing variety, industrially executed floors and walls define successive spaces. The diversity of spaces is increased by the introduction of the “white spaces” in the design: parts of the interior designed and executed by third parties in the community. 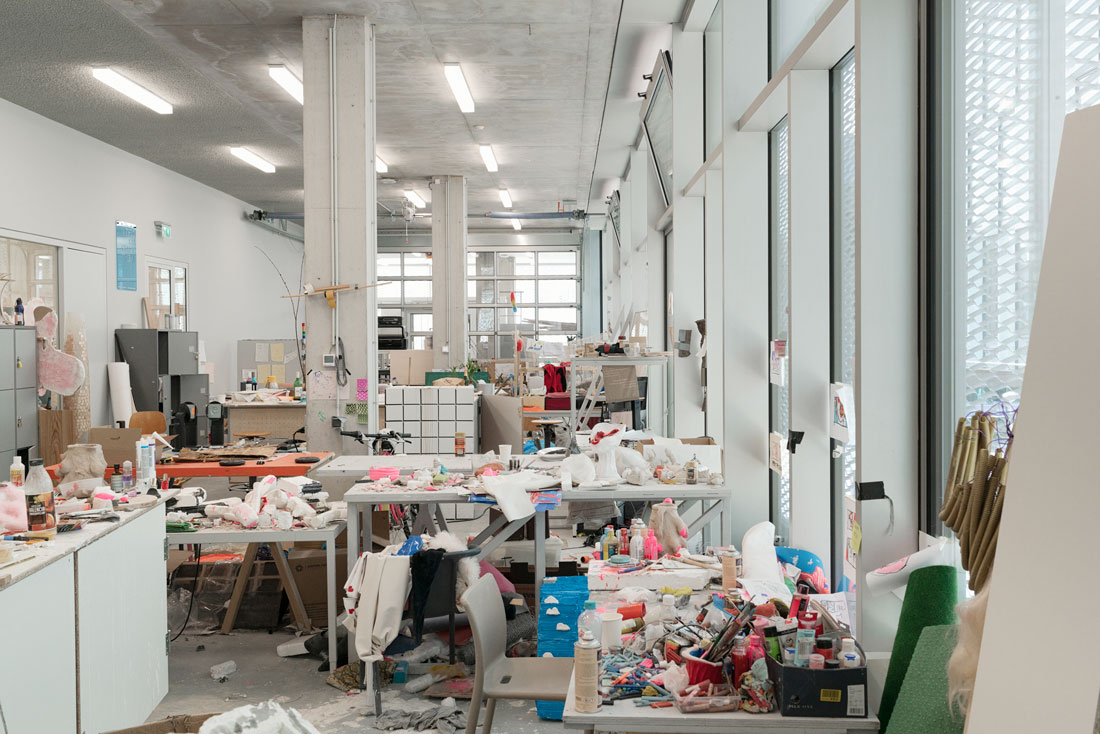 The smart and low-tech construction of the exterior façade creates natural ventilation and thus keeps the number of technical installations to a minimum. The overhangs and the woven-steel façade limit heating from incident sunlight. Beneath the overhangs are transitional spaces that people can claim as workspaces.

The building is a social hub that quite naturally accommodates and relates education, encounter, relaxation and collectivism, in which changing perspectives inform the educational environment. It is an interactive and dynamic setting for making and experimenting – a building that generates ideas, thoughts and works. 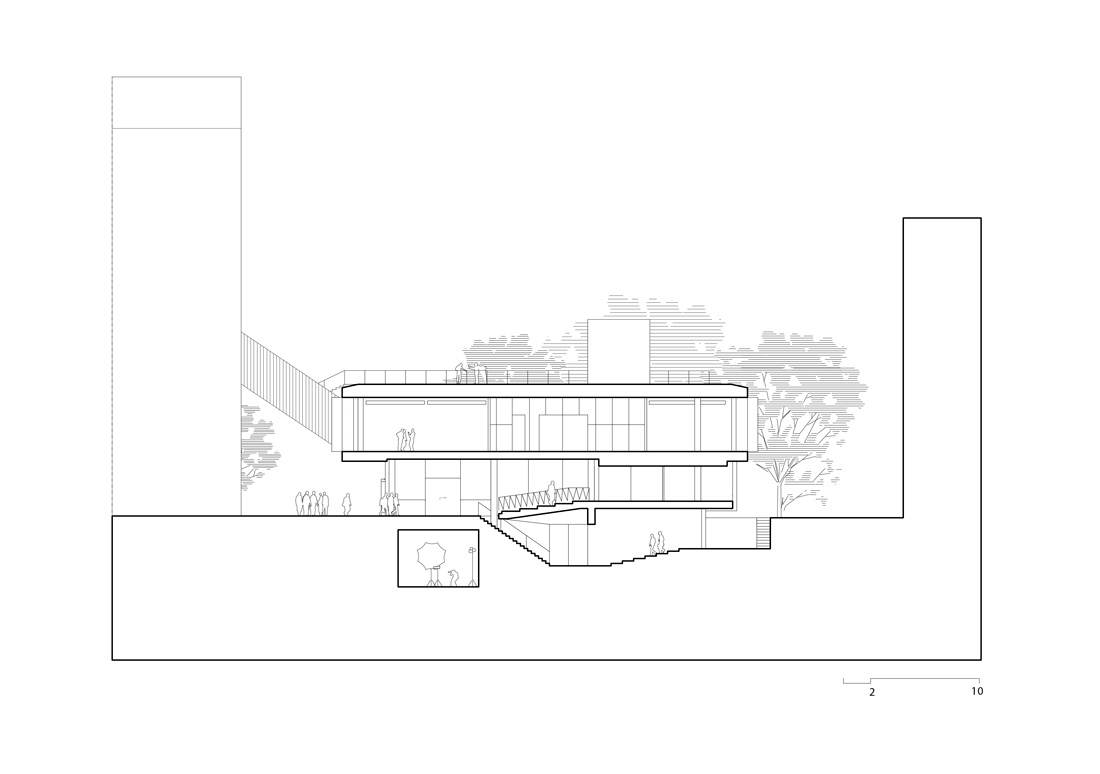