Garden House: Inclusion in the Ecosystem

With this small building the architects aimed to explore a semi-permanent structure that was conceived through the inclusion of the house in the site’s ecosystem.

The site is part of a leftover heavily vegetated corridor in between cleared grazing land. A historical anomaly, it gives a glimpse into what used to be there, although it too now is mostly altered through domestic gardens, human and (non native) animal activity. Small patches of the endemic vegetation remain, mainly tea tree heath, among mown grass, introduced species and plants considered invasive weeds. Half of the street is trying to support these patches through seed collection and dispersal, weeding and connecting. The other half of the street routinely chop down trees and mow down any emergent endemic species that might pop up in their lawn. 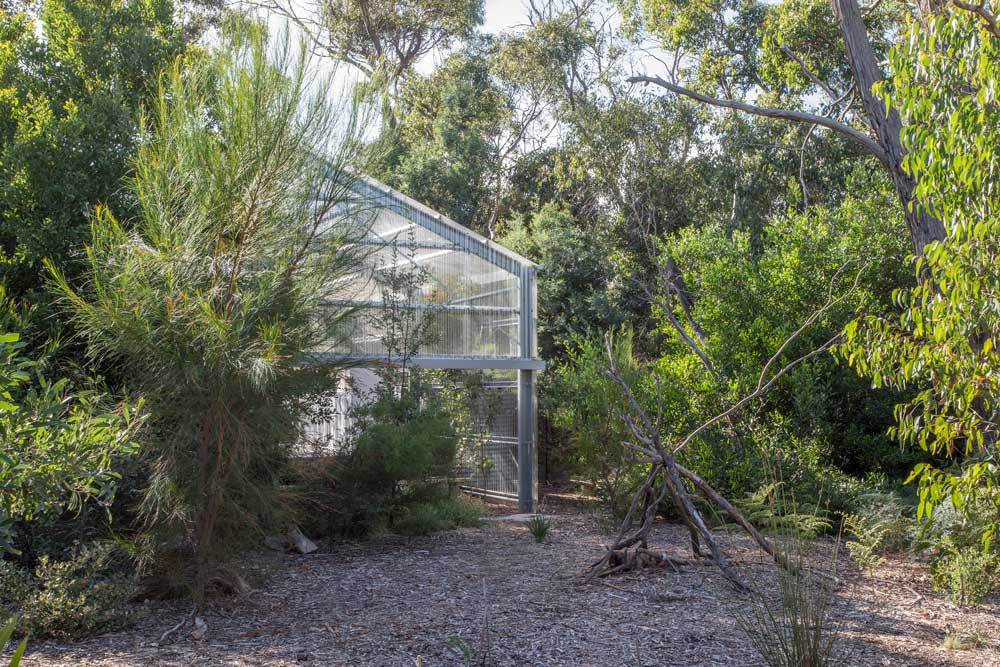 The site connects to its neighbouring vegetation and Westernport – a large tidal bay. The road now occupies the position of an ephemeral creek, and being downhill, the area can be seasonally wet and dry, and can flood. It acts as a compromised wildlife corridor for animals travelling from nearby Gurdies and Grantville Nature Conservation Reserves to the coast, and perhaps most successfully supports birds.

On this site the existence of endemic terrestrial orchids indicated that the soil had not been altered, and that, embedded in the soil and under the introduced grass were the bones of a plant community that once grew there. With an aim to support the strength of the remnant indigenous vegetation present on the site, weeding was carried out using the Bradley method – which works from ‘good’ outward, so that slowly the vegetation can re-establish.[1] What occurred is a new type of balance. Isolated from the overall web of relationships and systems, it is difficult to know if you are strengthening a plant community or if it will now always depend on you. However, as mentioned elsewhere in this catalogue/book, the presence of Greenhood Orchids (Pterostylis Nutans) are evidence of the presence of Mycorrhiza (required at the germination stage) and often a symbiotic relationship with certain trees. Mycorrhiza fungi is a crucial foundation for healthy soils and have recently been credited with the network used by trees to communicate with each other.[2] Continued mowing and fertilisation of the (non native) grass on the site when it was bought, a hasty positioning of the house on their location, potential changes to the hydrology of the site such as water penetration/overland flow/microclimate, and symbiotic tree removal among others would have meant these orchids would have disappeared in the near future.

By observing and supporting the expansion of small remnant patches of endemic vegetation, a shape of the site emerged that revealed an area where no regeneration was occurring, and as it turned out had been the site of imported fill, effectively smothering the seed stock and altering the soil.

The house was situated on this ‘clearing’, raised above the ground to allow for overland flow and so as not to ‘cut’ the site. Apart from a small utilities area, no ground is sealed. This supports the expansion of the vegetation inside the house. Now part of this ecosystem, this house supports life. The disturbance generated by the construction was quite minimal,[3] but nonetheless enough to generate the expansion of tea trees (which respond to disturbance). Tea trees now regularly grow inside. 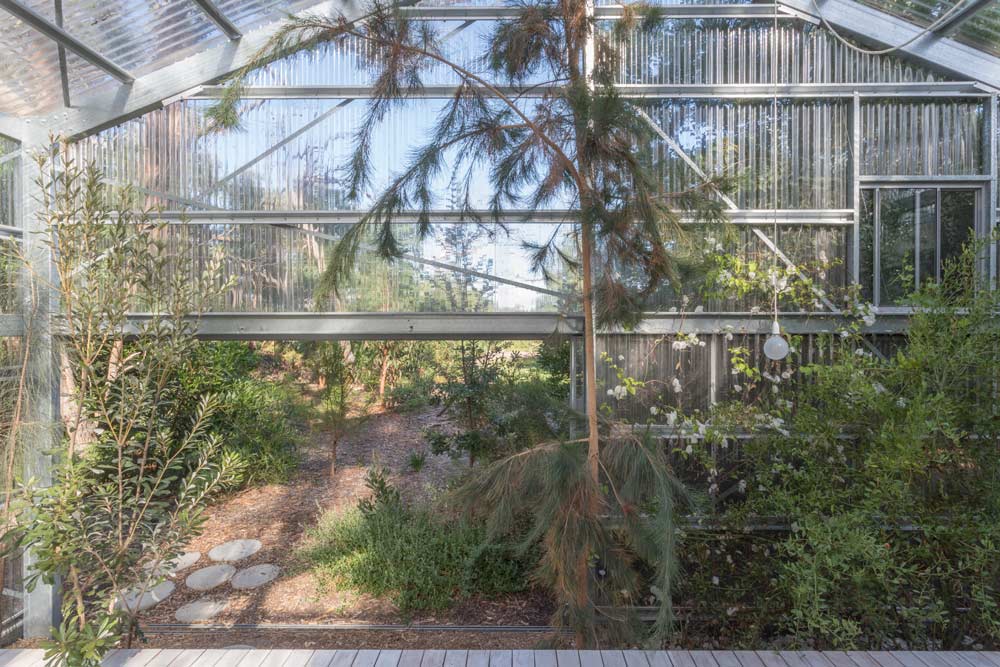 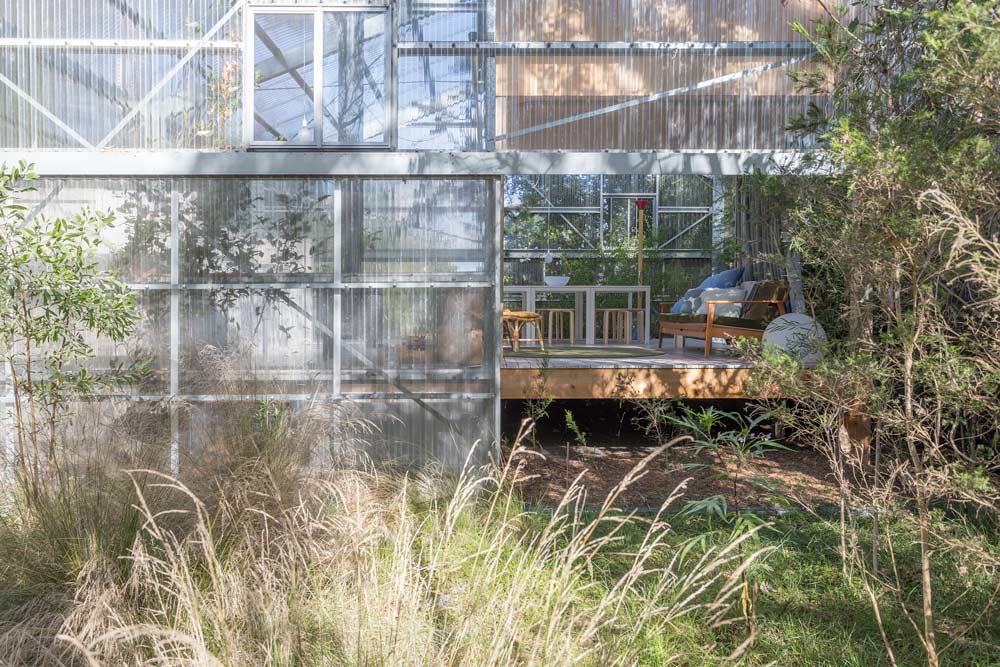 The decision to make a building that admitted a lot of light, was in order to sustain plant life. Extremes are controlled through summer use of shadecloth, and also the strategic planting of the endemic trees that will in time further shade the house.

As a holiday, and experimental house, it is conceived as just a little more than a tent: a deck and raised platform, covered by a transparent ‘shed’, the interior perimeter ‘verandah’ is garden space and living areas are dynamic yet subtly spatially defined; up, down, under, above. The soil and natural ground line are maintained and carried through. 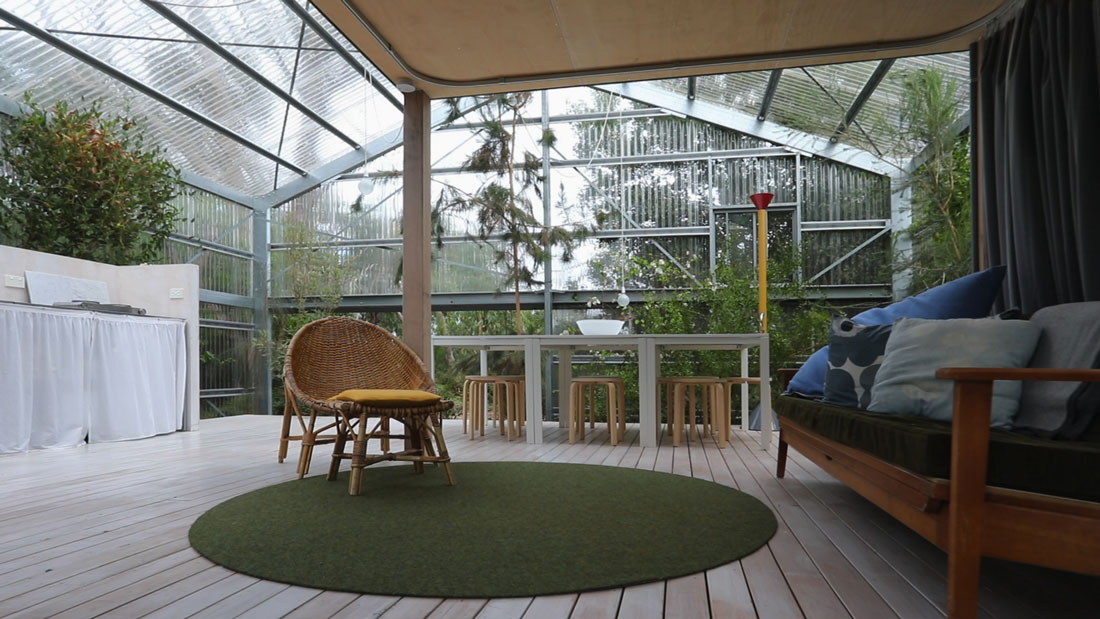 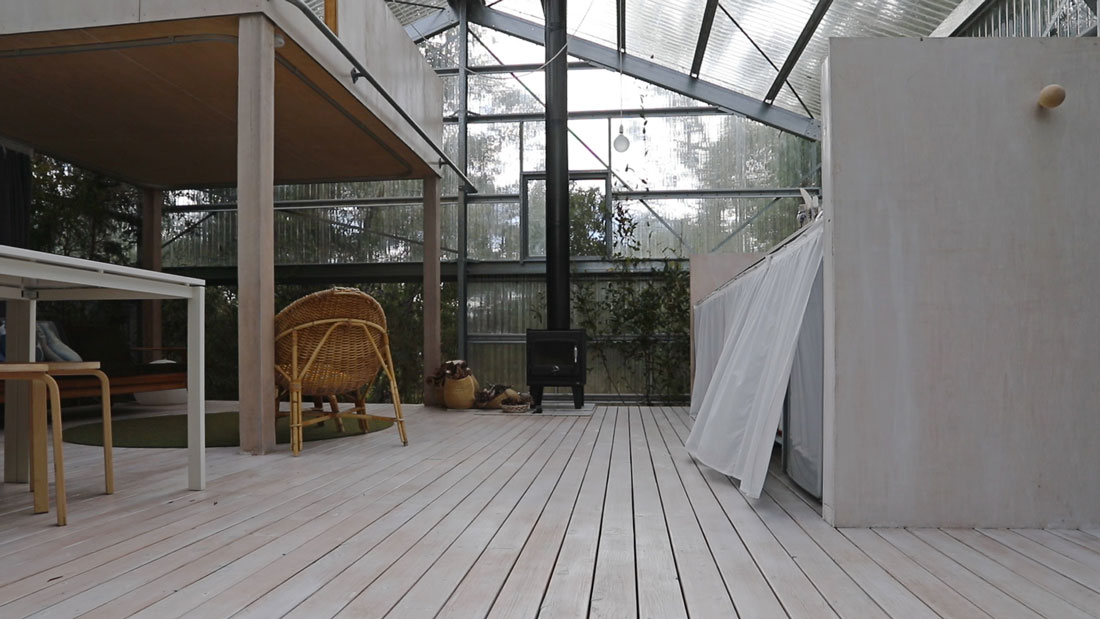 [1]  See Australian Association of Bush Regenerators (AABR) n.d., Working with natural processes: the Bradley method, Australian Association of Bush Regenerators, viewed 10 February 2018, <http://www.aabr.org.au/learn/what-i-bush-regeneration/general-principles/the-bradley-method/>. [2]  See Wohlleben, P 2016, The Hidden Life of Trees: What They Feel, How They Communicate – Discoveries from a Secret World, Blanc Inc., Carlton, Victoria, Australia. [3] Through an unusual application of garage kit construction technology, very little disturbance or waste was created (around one cubic meter of waste, the majority of which was recyclable).