The Ruhr District’s Central Musicology Library is handed over the public. 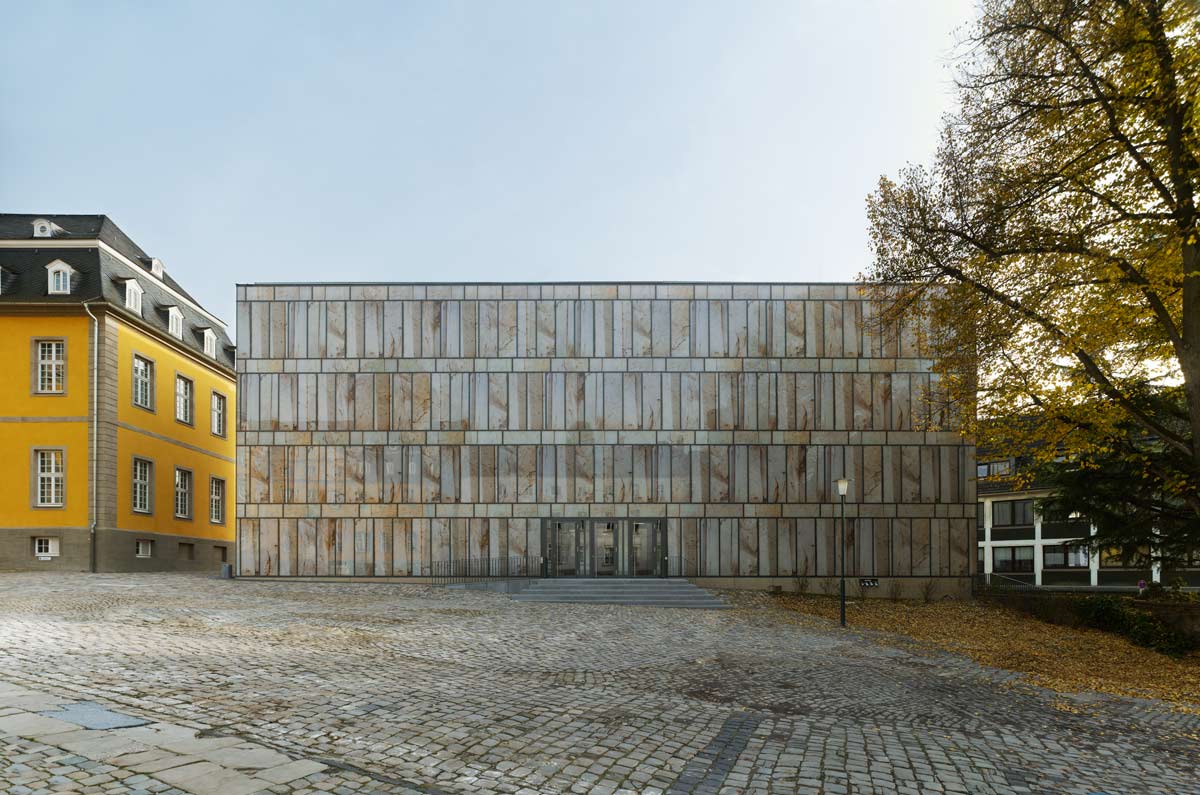 Folkwang University of the Arts is home to one of the largest musicological collections in Germany. Until now, its inventory of approximately 190,000 items including sheet music, sound recordings, images, books and other media has been stored in various archives and libraries across the region. Now, however, musicological items from three institu­tions – Folkwang University, the former Library of Musicology at the Ruhr University Bochum, and the Music Education Department at the University of Duisberg-Essen – have been brought together under a single roof, in a new building designed by architect Max Dudler. Situated on the Werden Campus, the library was inaugurated at the end of September 2012. 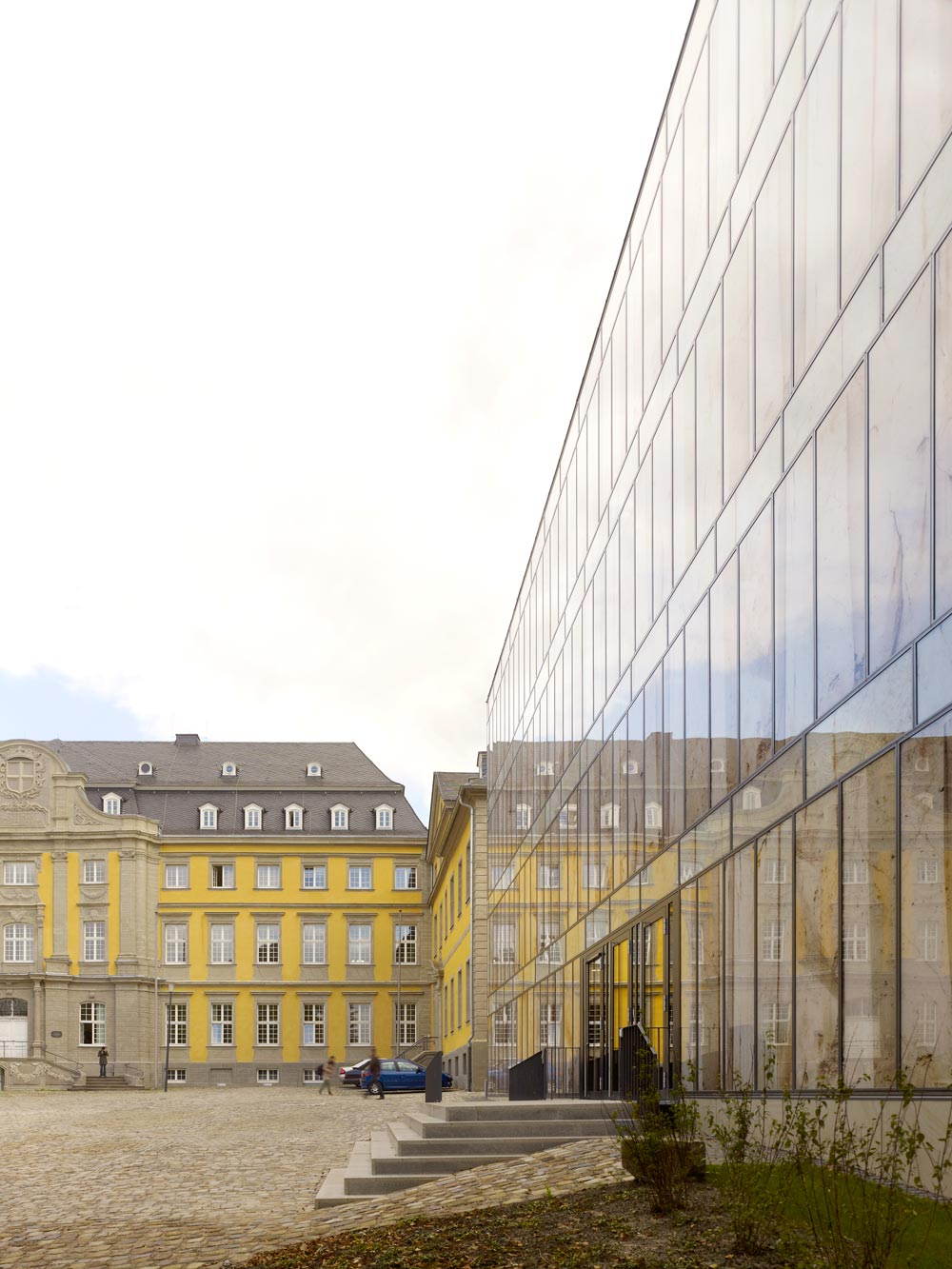 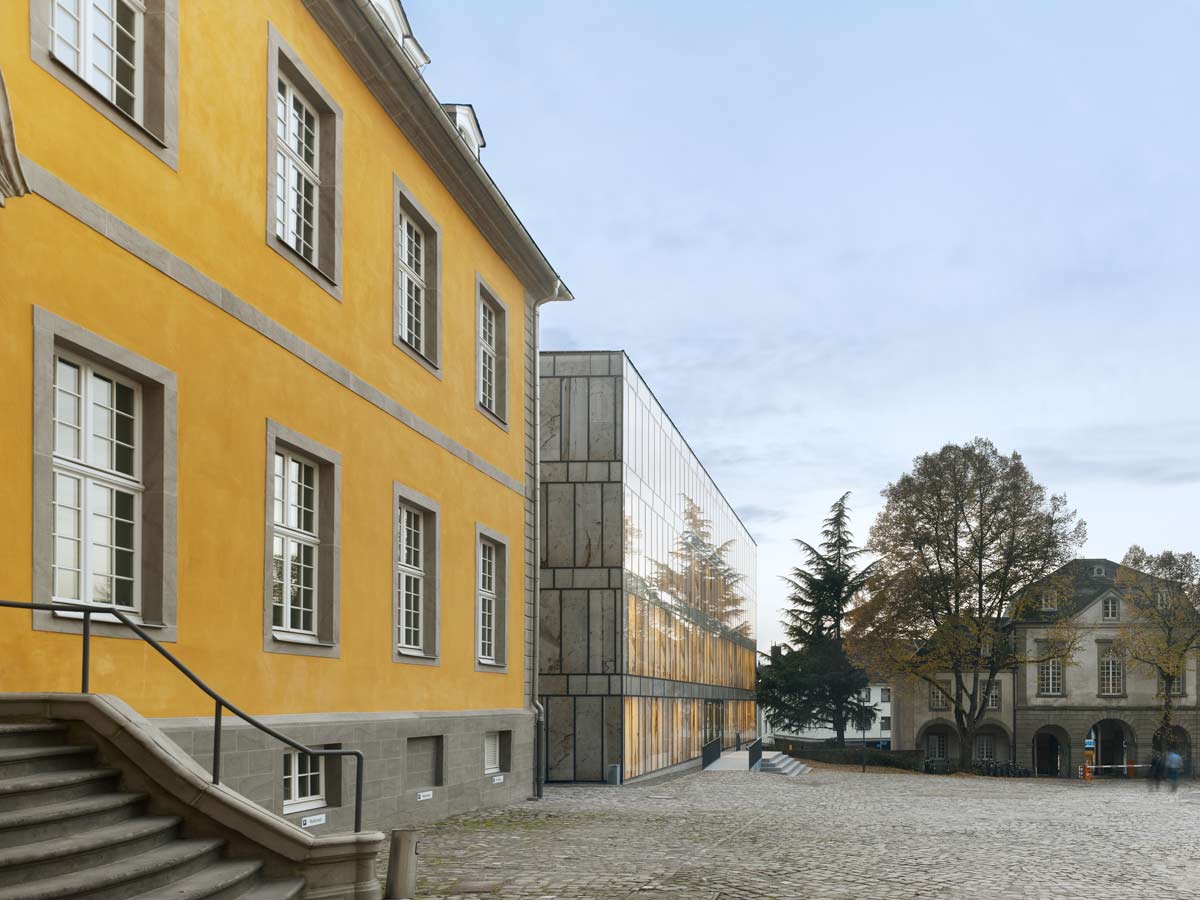 Folkwang University of the Arts is North Rhine Westphalia’s college of art and music. Its main campus is housed in the former Benedictine abbey of St. Ludgerus in Essen-Werden, located in the southern Ruhr Valley. The small 8th century site was extended into a princely Baroque residence in the 18th century, arranged around a magnificent courtyard (cour d’honneur). The construction of the new library on the south side of the courtyard by the architect Max Dudler replaces a 19th century military hospital building demolished in 1969. In 2006, Max Dudler won the design competition organized by the Duisburg branch of the Building and Real Estate Management Authority, North Rhine Westphalia. The project was generously supported by the Alfried Krupp von Bohlen und Halbach Foundation.

In 1811, while under French occupation, a prison was set up in Werden Abbey. The Prussians extended this prison and erected a hospital building on the south side of the courtyard. Upon the demolition of the hospital building, the remaining ensemble of buildings looked unbalanced. Without reproducing the original shape of the prison, the new building encloses this side of the courtyard with its voluminous crystalline structure. The new building’s eastern side adjoins the so-called administrative wing of the old abbey. The volume of the new building corresponds approximately to that of the Prussian wing across the courtyard.

Folkwang Library was conceived as a monolithic body built atop the level base of an old rough stone wall. Max Dudler’s concept for the building is based on the idea of a museum case: an exterior shell protecting the valuable contents within. The functional areas are grouped around the reading room, which lies at the center of the building. The book shelves are arranged in strict order around this room, thereby lending scale and structure to the building as a whole. There are two entrances to the library; the main entrance is from the courtyard via a flight of external steps, designed to approximate the style of the entrances to the other buildings off the courtyard. The library’s second entrance, on the Klemensborn, serves as an emergency exit. Lending desks, media cubicles, an administration area and cloakroom are situated on the ground floor; the reading room is on the first floor. The compact archives are housed in the library’s basement. 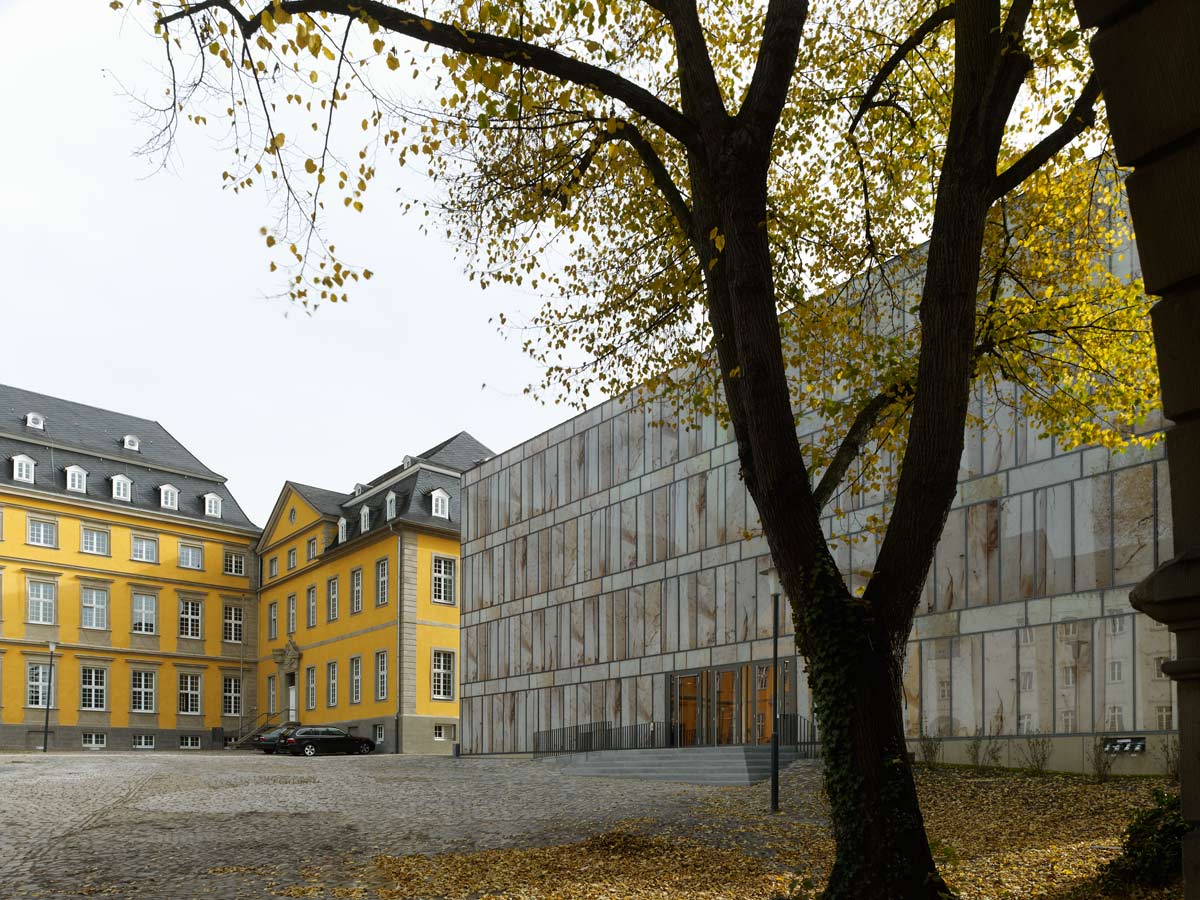 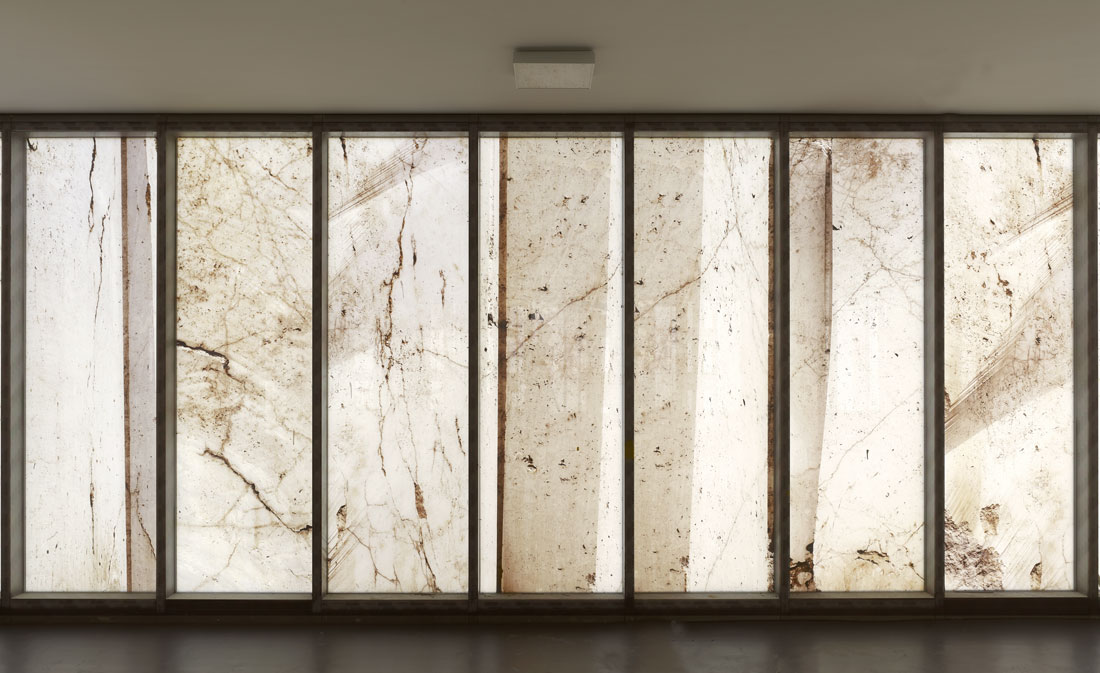 The design of the building’s façade was developed in collaboration with the photographer Stefan Müller. Every pane of glass in the façade depicts a large-format close-up of a quarry. These photographs reproduce the unhewn stone in its original size. The photographic works were applied directly onto the glazing using a special technique. In keeping with the elemental meaning of the number twelve in music, twelve motives were pieced together into an overall composition. Like the scagliola technique from the Renaissance used to create stucco marbling, this special photographic technique creates the illusion of the façade being fa­shioned from the stone material itself. At the same time, a tension is created between the imagery of the textured stone and the flat surface of the glass, reminiscent of the historic sgraffito technique, whereby a graphic embossing is etched into a smooth plaster surface. The new building’s smooth glass surfaces create the perfect impression of a polished monolith. However, this is called into question by the translucency of the building’s exterior, thereby playfully breaking the boundaries both from inside and out. Silhouettes of people can be seen beyond the façade. The interior is bathed in a soft, filtered light. In the evening, the building illuminates the courtyard outside. 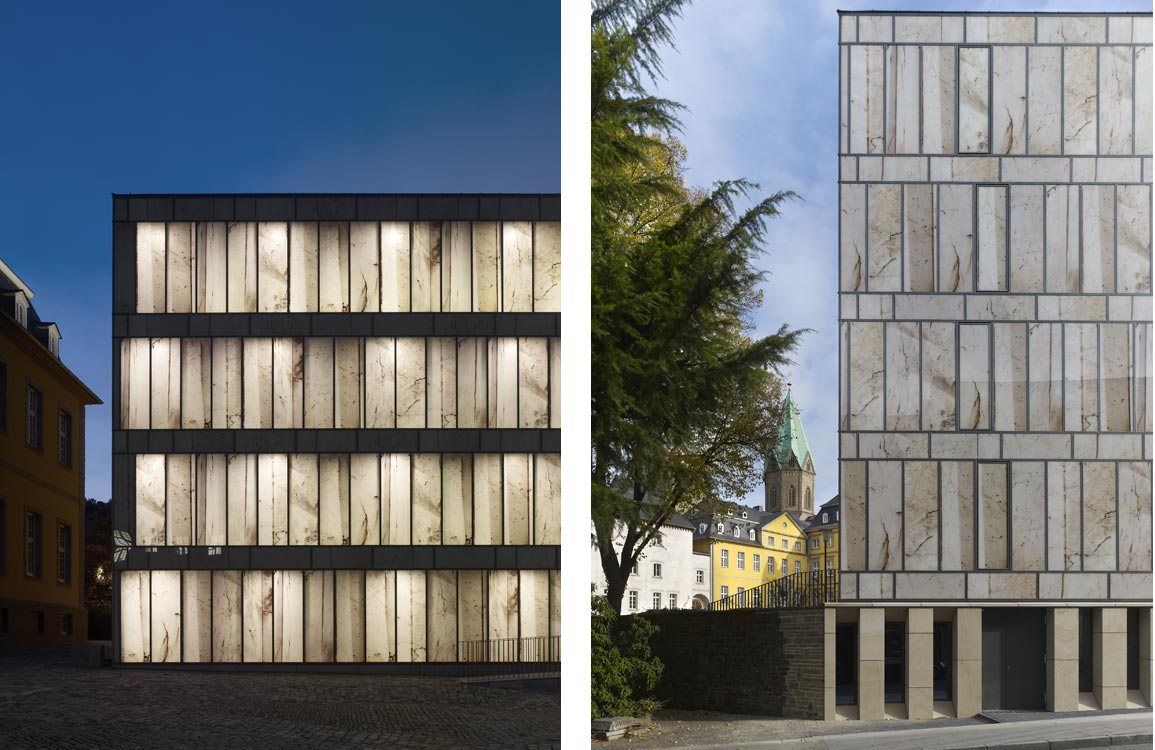 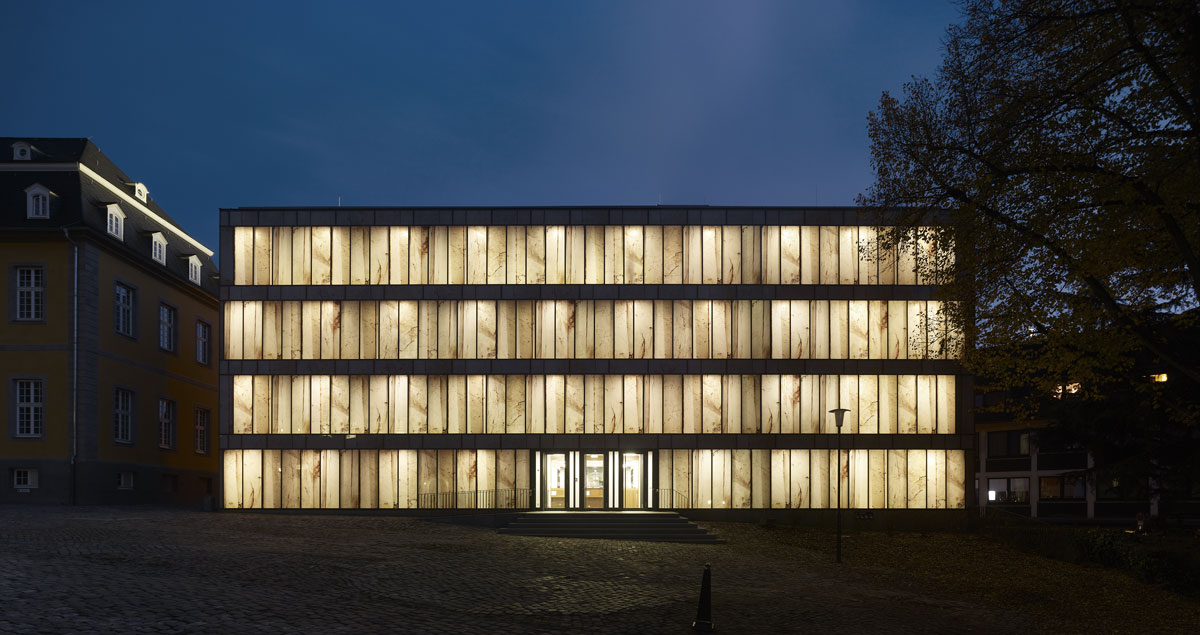 The building comprises a reinforced concrete skeleton with concrete cores to provide stiffening. The glass façade is attached to the building’s projecting structural slabs using the mullion-transom system. The concrete pillars are shaped and positioned according to the dimensions of the bookshelves. The pillars are clad in cherry wood, which is also used for the shelving in the reading room. Not all the pillars are load bearing. Some are used as part of an “inert” air-conditioning system. With the ventilation pipes being channeled directly through the reinforced concrete ceilings, this building material’s potential as a heat sink is thereby put to good use. By coupling this with a heat exchanger, an innovative contribution to energy efficiency is achieved. 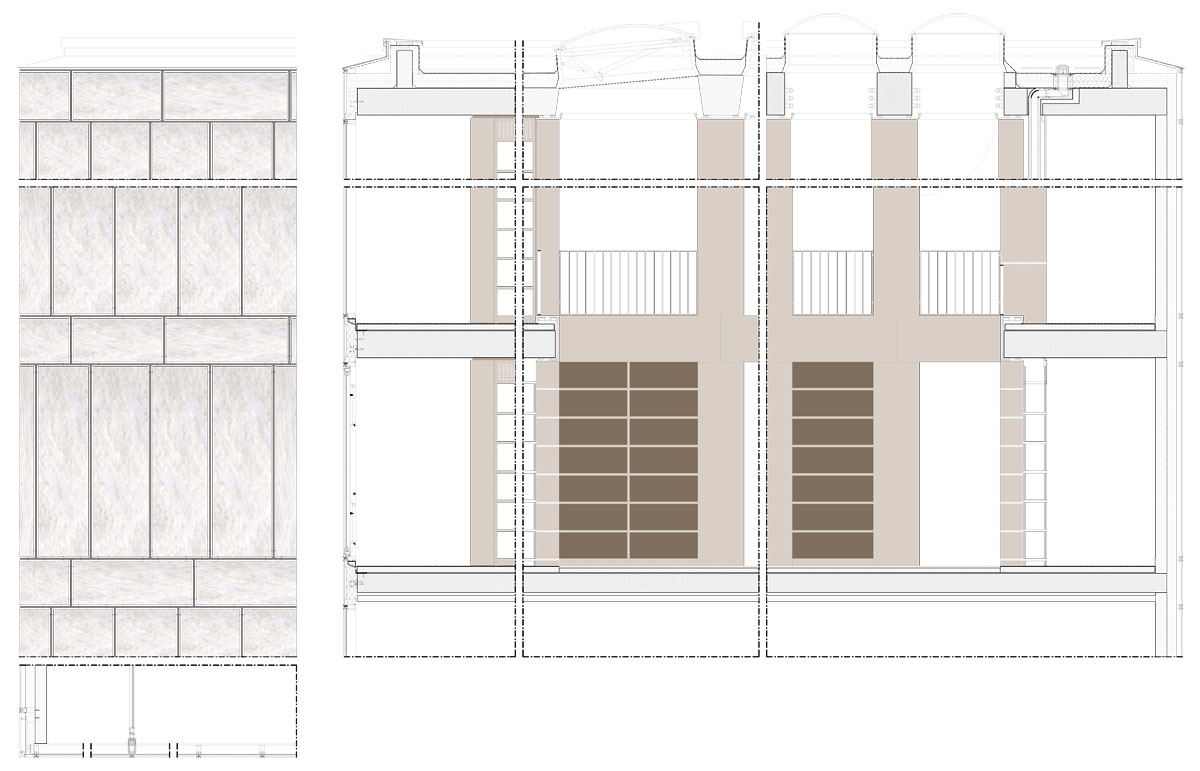 The library furnishings – such as its tables, chairs and shelves – were also designed by Max Dudler. 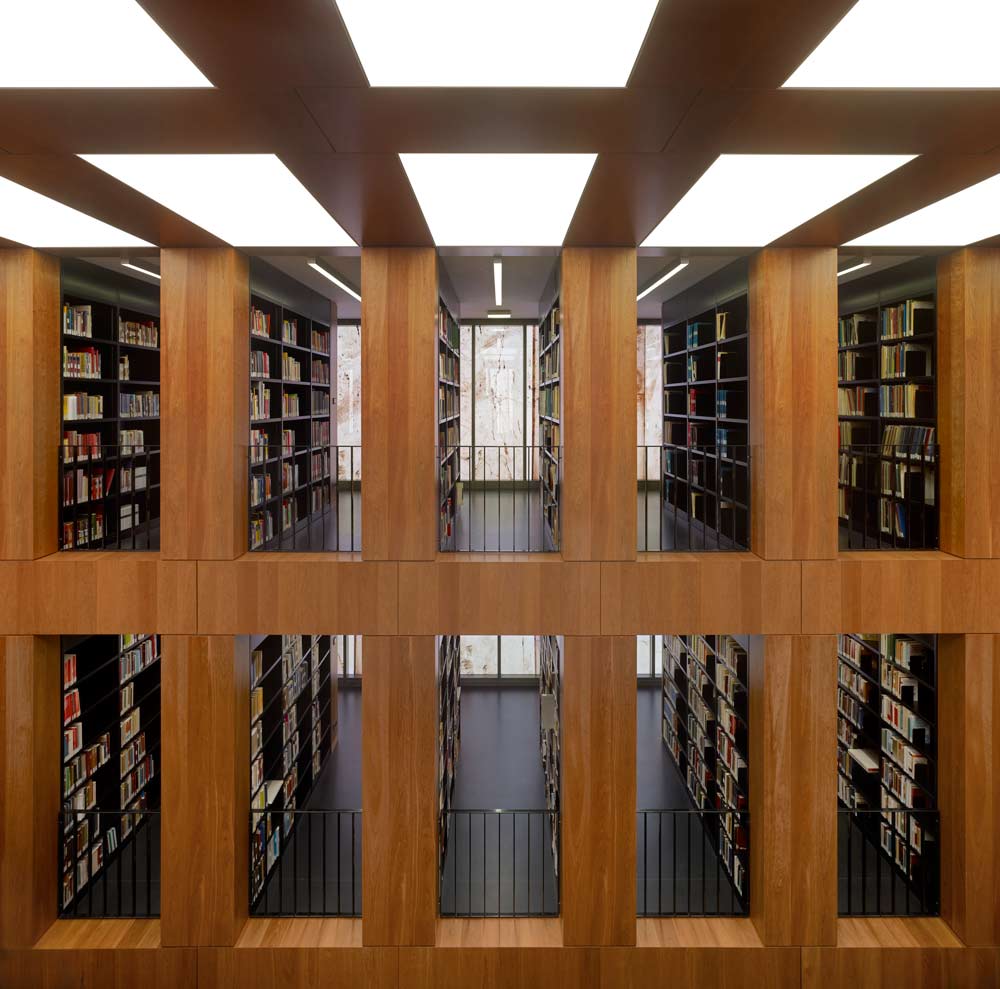 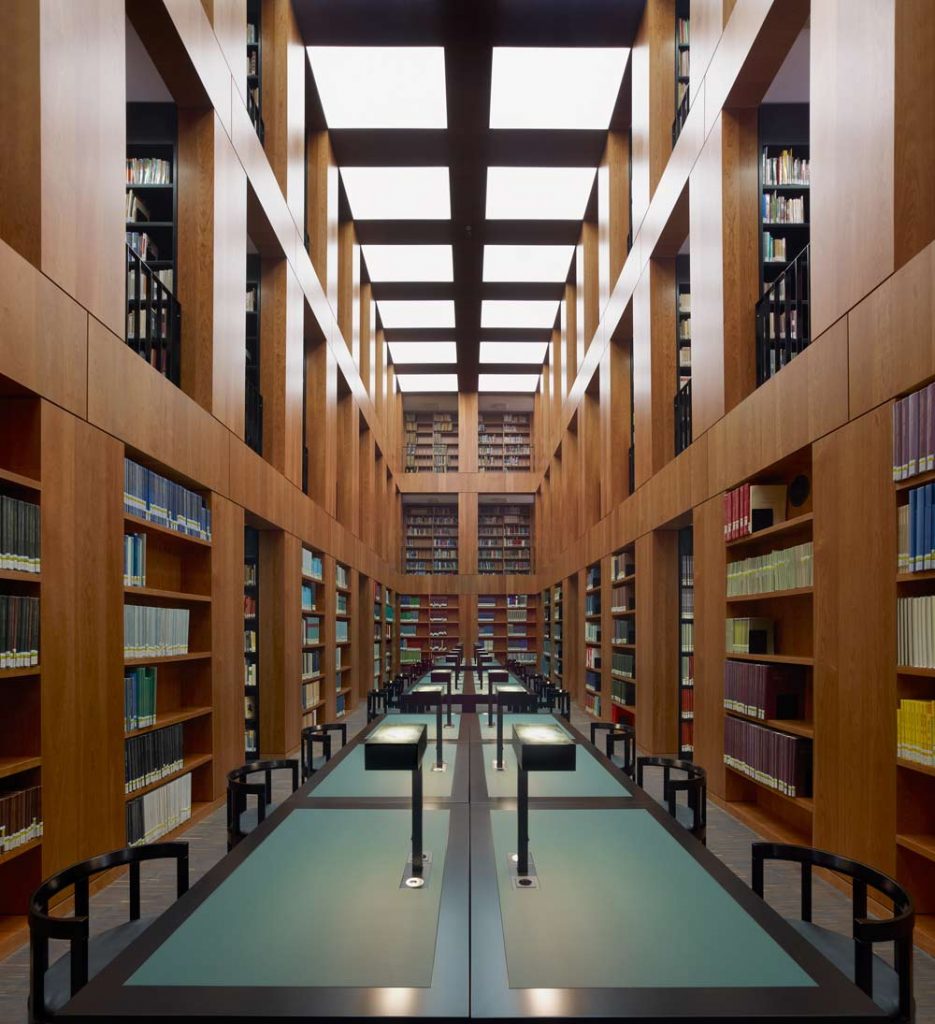 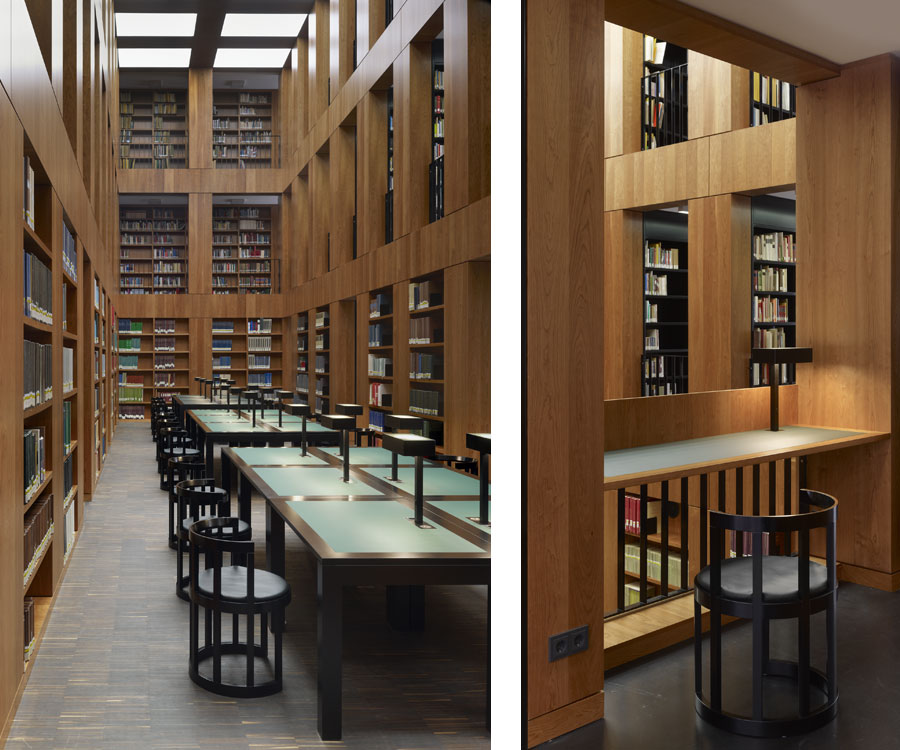 « KTH School of Architecture
On his Design Processes »