The project for the transformation of the warehouse building belonging to the old Fabra & Coats industrial complex in Barcelona is included in the process of reconversion of this 19th- and 20th-century textile complex to incorporate it into the network of “BCN creation factories”. The project will bring more than 28,000 m2 of facilities to the Sant Andreu district and, for the first time in an industrial heritage transformation, social housing is included. The project includes 46 two-bedroom housing units: 41 units for young people and 5 units as a temporary residence for artists with ties to the complex. 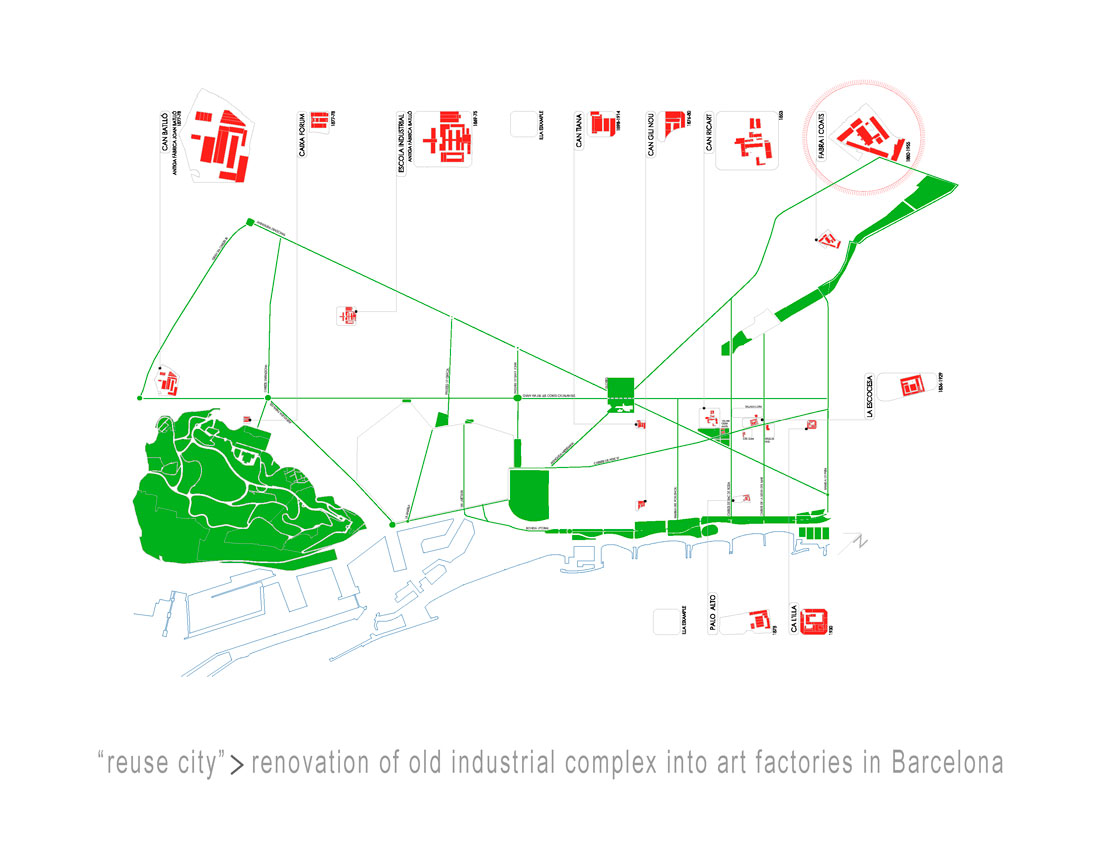 The original building is 100 m long. The first design decision was to highlight the value of its maximum dimension, which is its length. We access through the center, creating an interior square where the promenade of the interior stairs begins, ascending diagonally. The original building is communicated physically and visually from the ground level up to the roof structure. 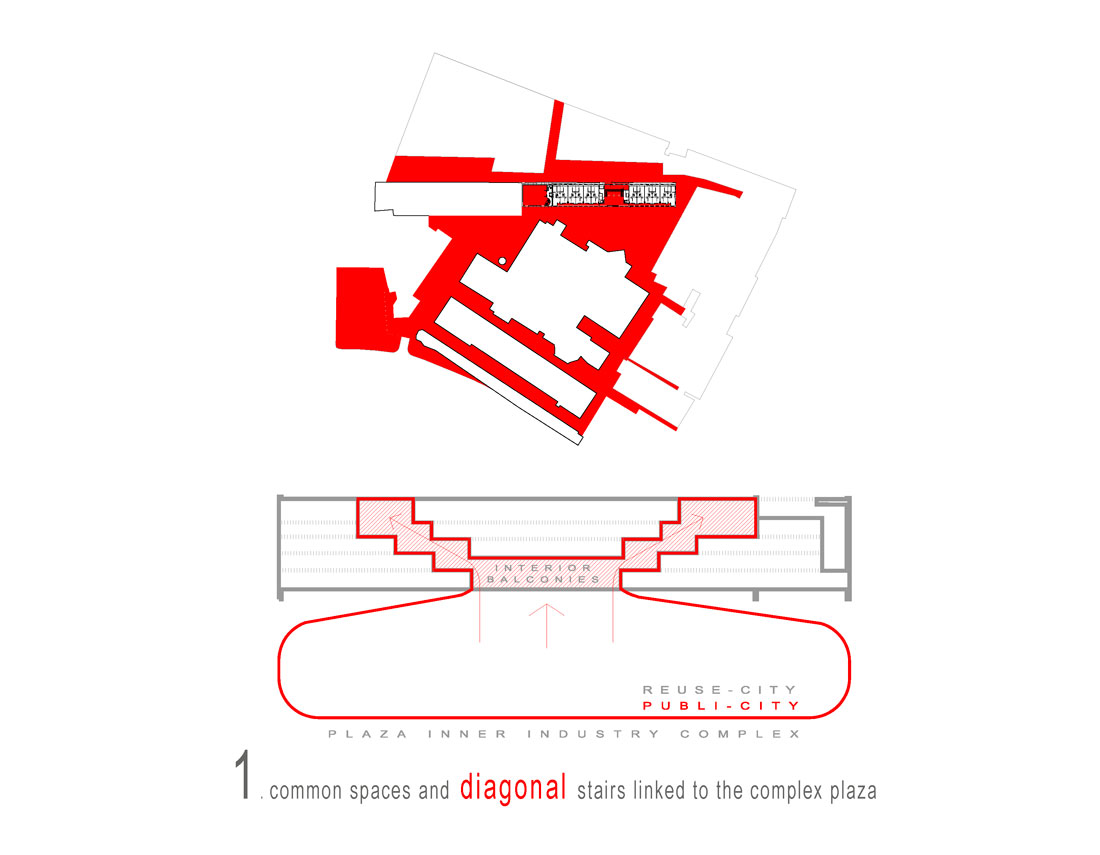 The new construction is generated through assemblage. It is a dry construction using just a few materials, as in the original industrial building. Wood is used in all its forms: solid, agglomerated, cross laminated, etc. The materials are joined following a textile principle. Sewing the elements together, the new construction can be assembled and disassembled, so it is “reversible”.

The two interior floors of the building are harnessed structurally, without any reinforcement (load capacity of 1,100 kg/m2) to support the two new levels of housing. 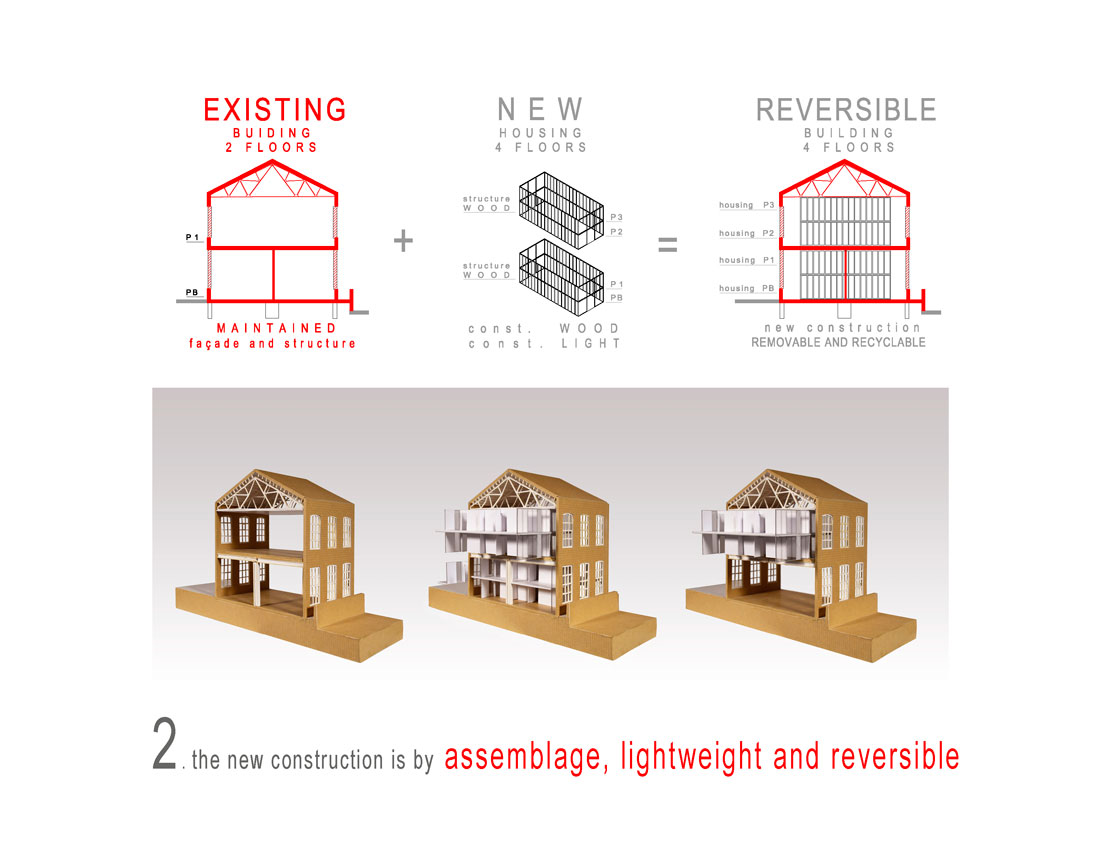 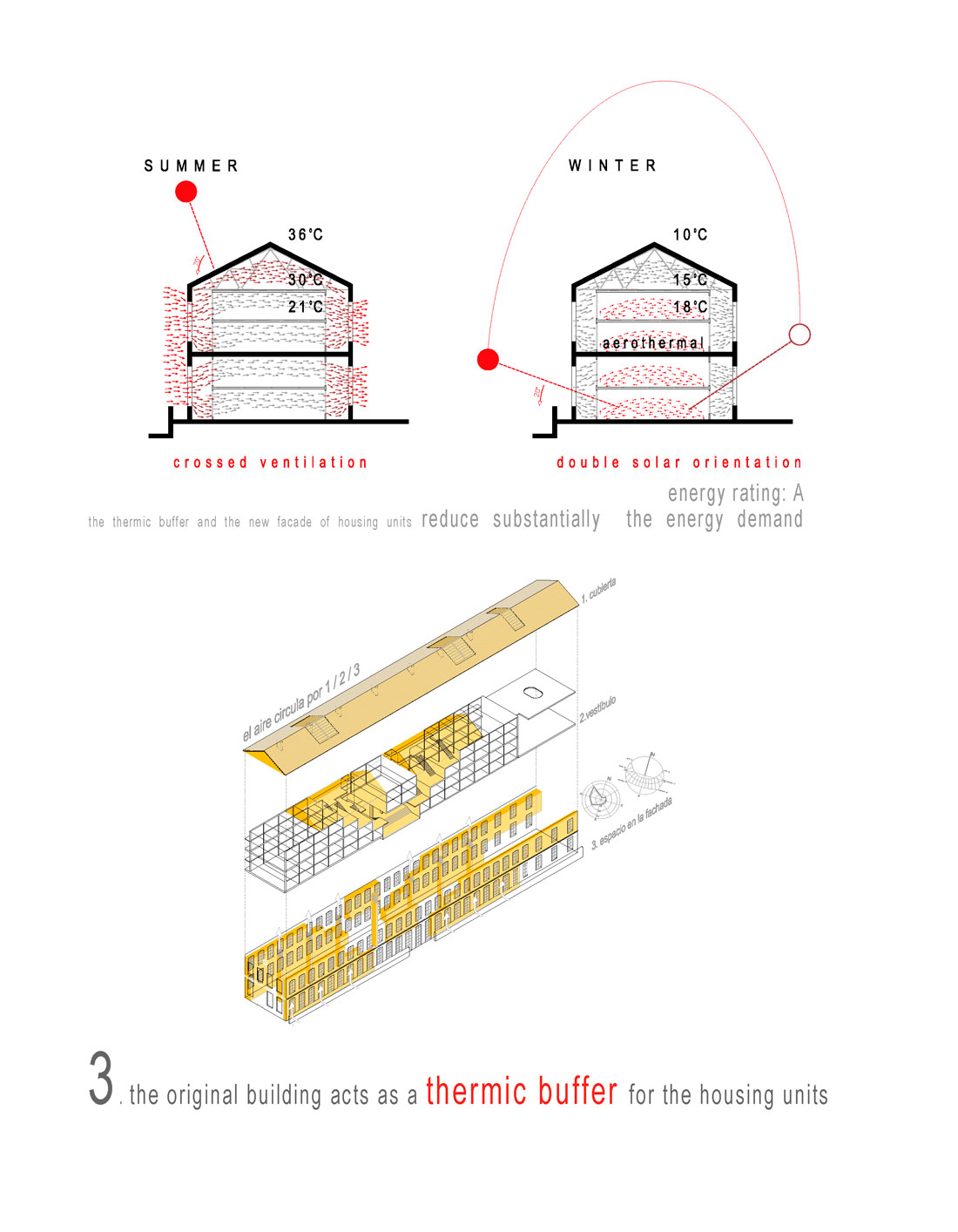 Action: Industrial heritage + social housing + cultural complex. The housing units will be occupied by young people and artists with ties to the complex, who will make the most of the social common space. This space will combine temporary art interventions with spaces for working and exchanging ideas, making the building a point of connection between the district of San Andreu and the interior square of Can Fabra. 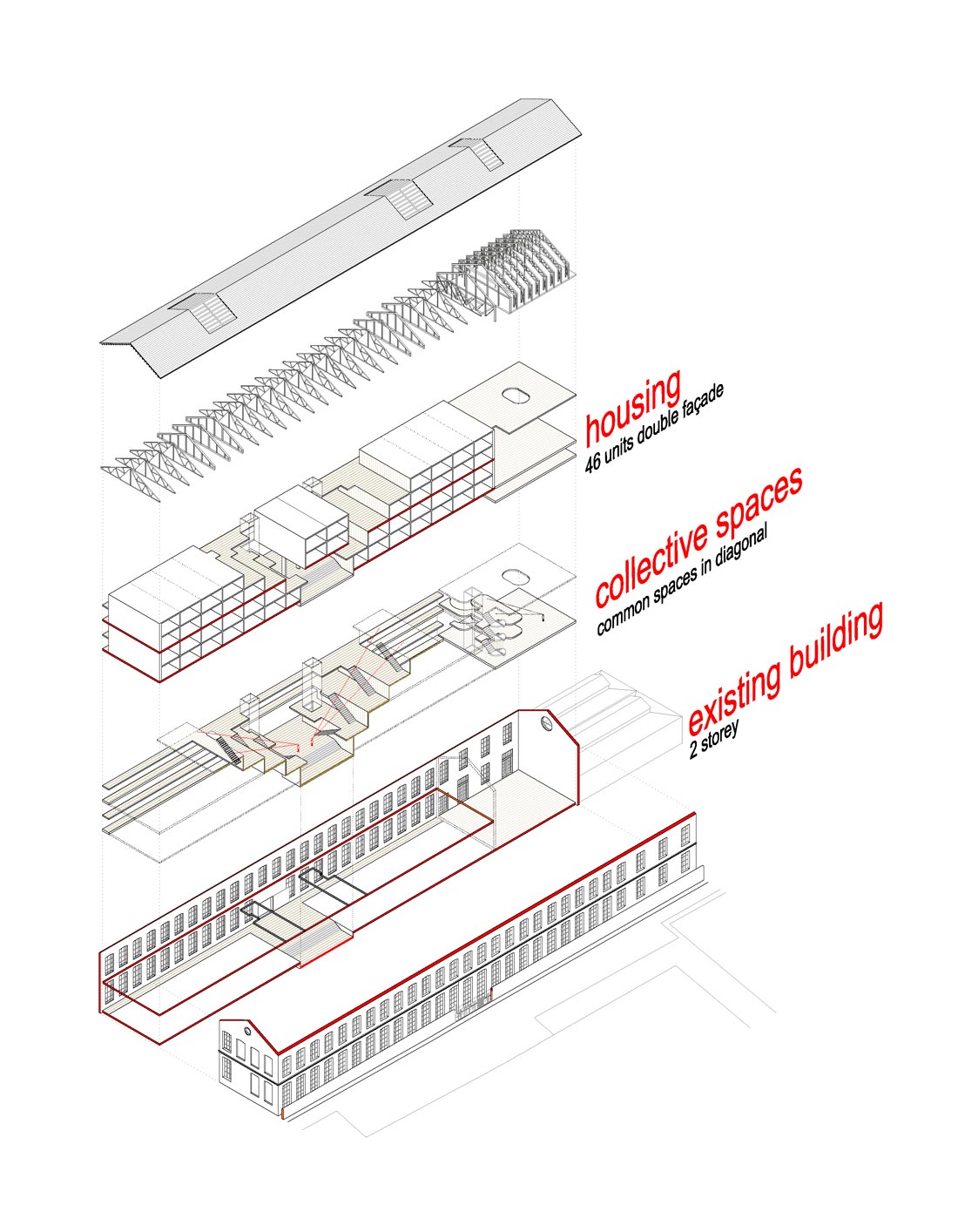 One side of the building, the result of an extension from 1950, has been occupied for the headquarters of the “Colla Castellera Jove”, a team of human tower builders. The adjacent building, 100 m long, has been transformed into a complex of 46 social housing units. 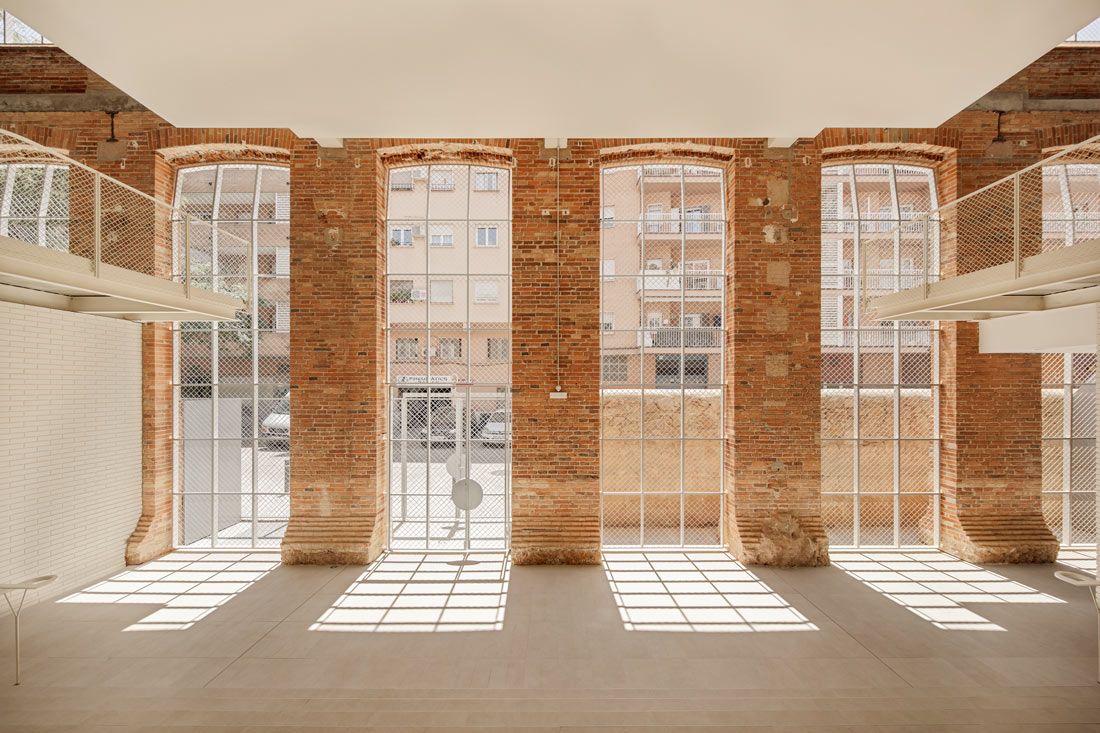 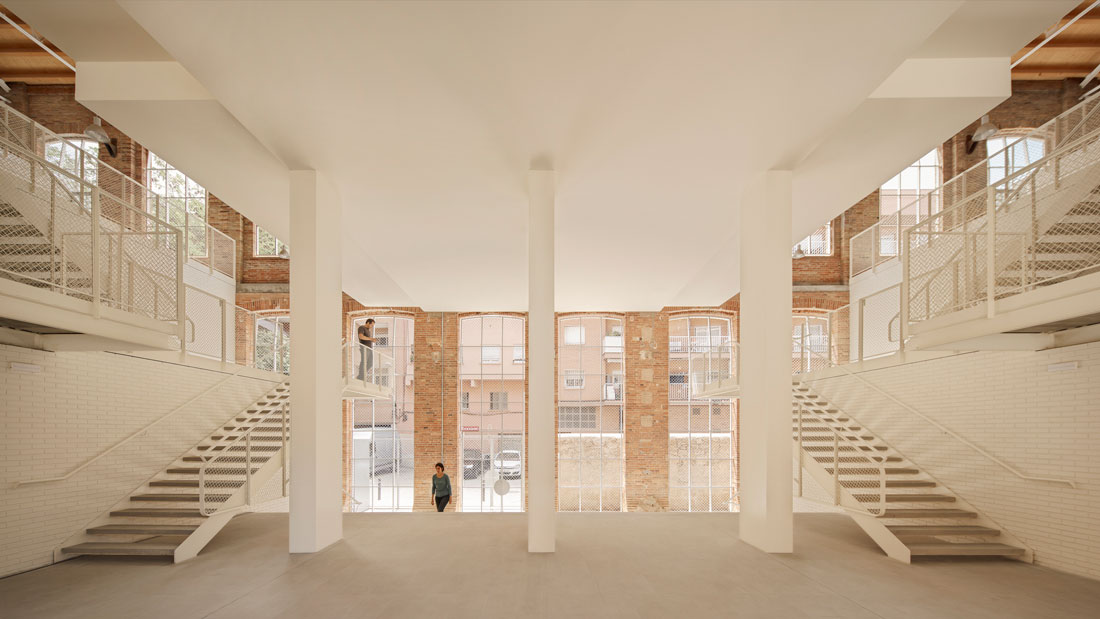 – Interior-exterior continuity: the interior spaces are open to the public square of the complex, where outdoor training can take place.

– Visual interaction between the interior spaces: gaps and transparent metal enclosures allow us to follow the activities of the human towers from anywhere in the building. 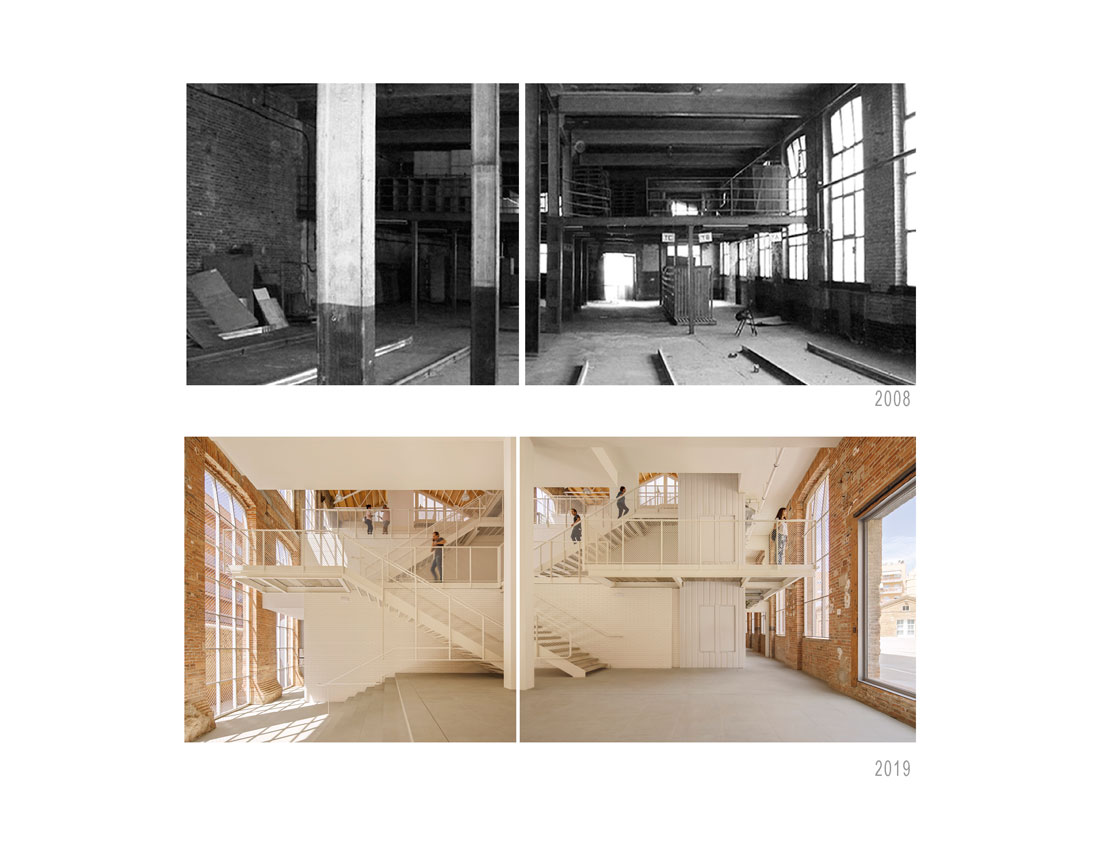 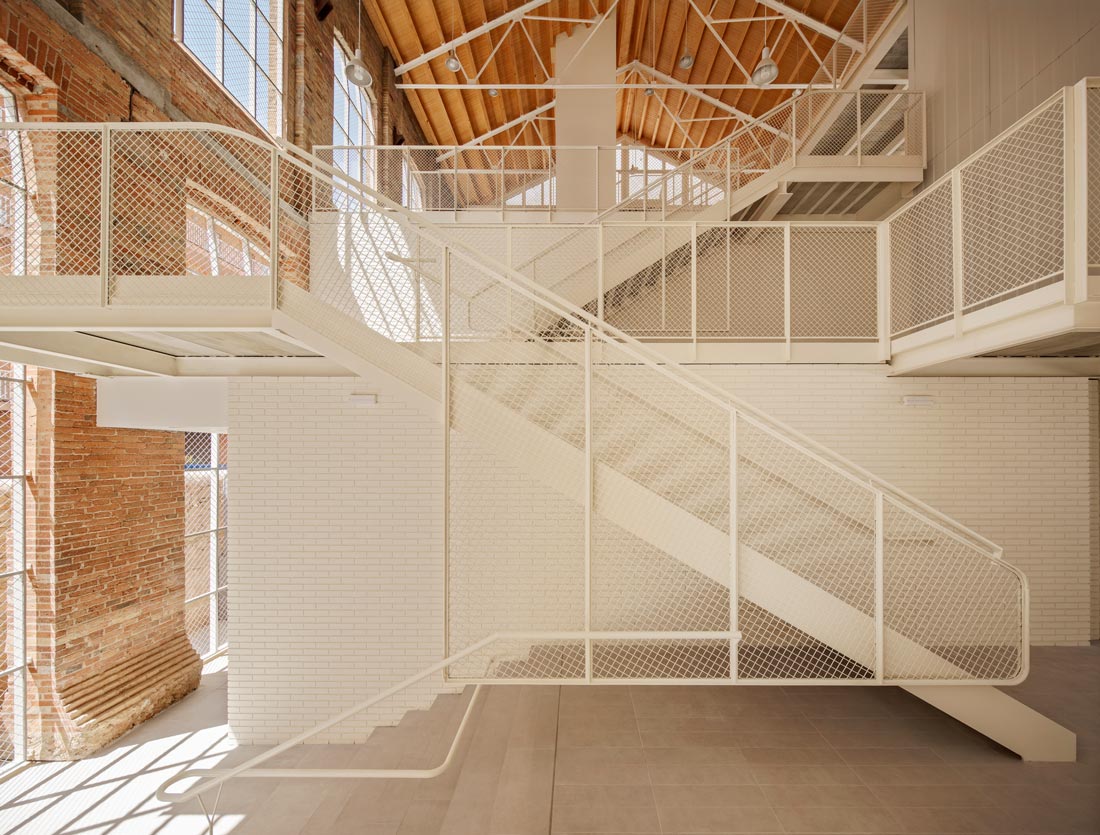 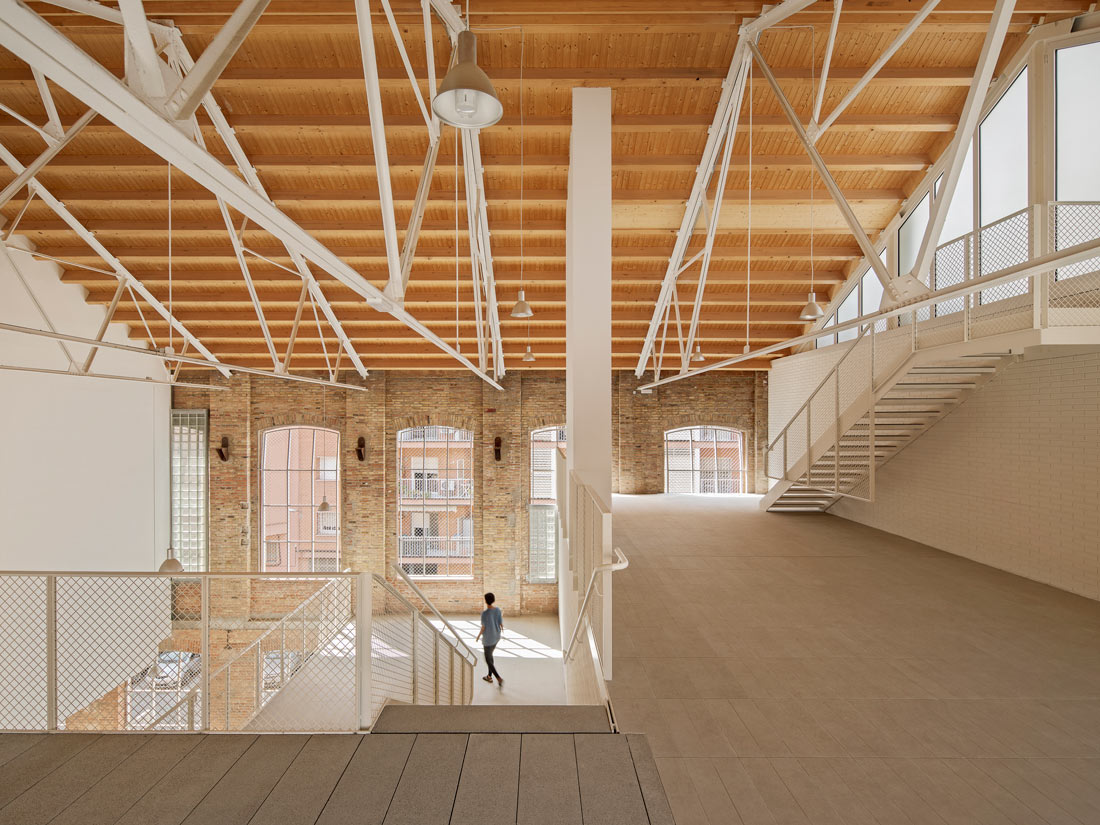 The configuration of the main space, the training room for human towers (10x10x10 m), draws on the analysis of the structure of human towers: pyramidal constructions that function, ideally, by pure compression. As they grow, they fill the space, creating an empty space around them. The more load a floor has, the more section it has, and the drop of loads is displayed in the shape of the tower. Reinforcements are used to prevent buckling due to movements or collapse due to excess weight: “pinya, folre, manilles”. 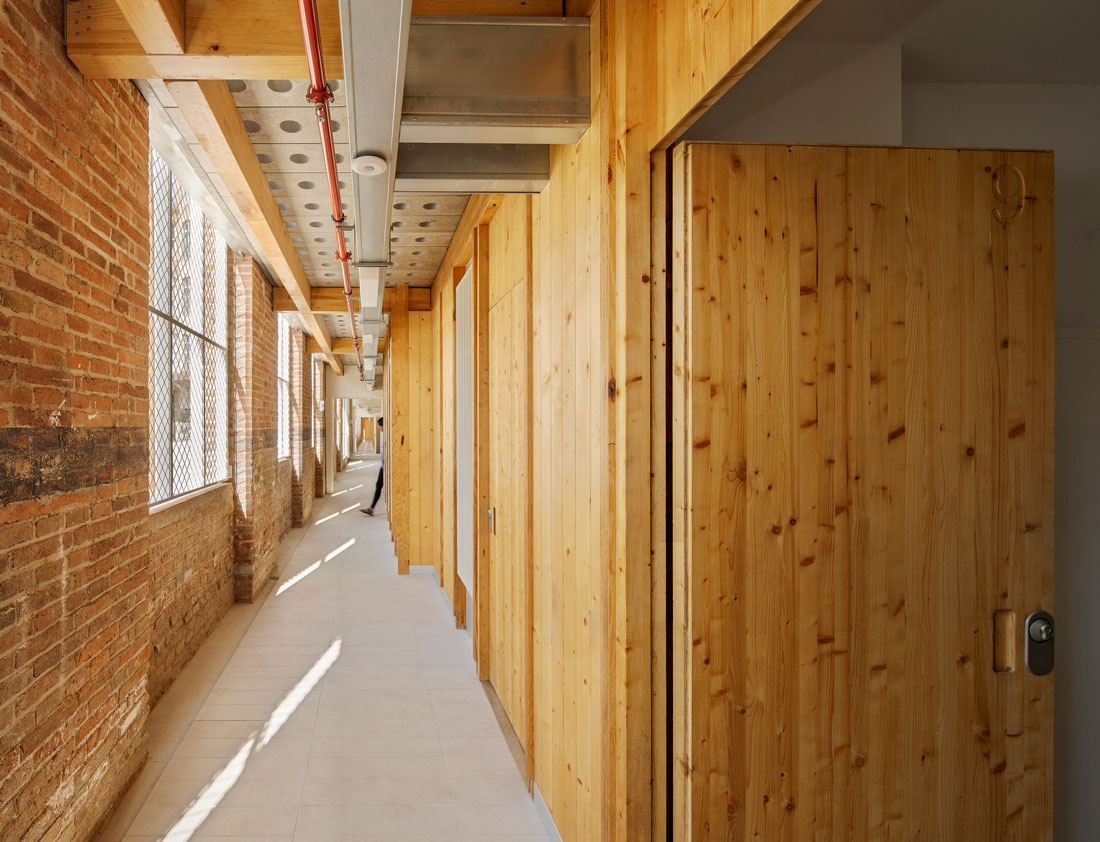 The new structure is conceived in a complementary way to a human tower: it works like a shell, creating an empty space inside. The upper floor under the roof is a three-dimensional suspended structure that does not make its operation evident. It is formed by the slabs, the trusses and the roof, and is supported by the perimeter walls, which work in flexo-compression, locked by the slabs. 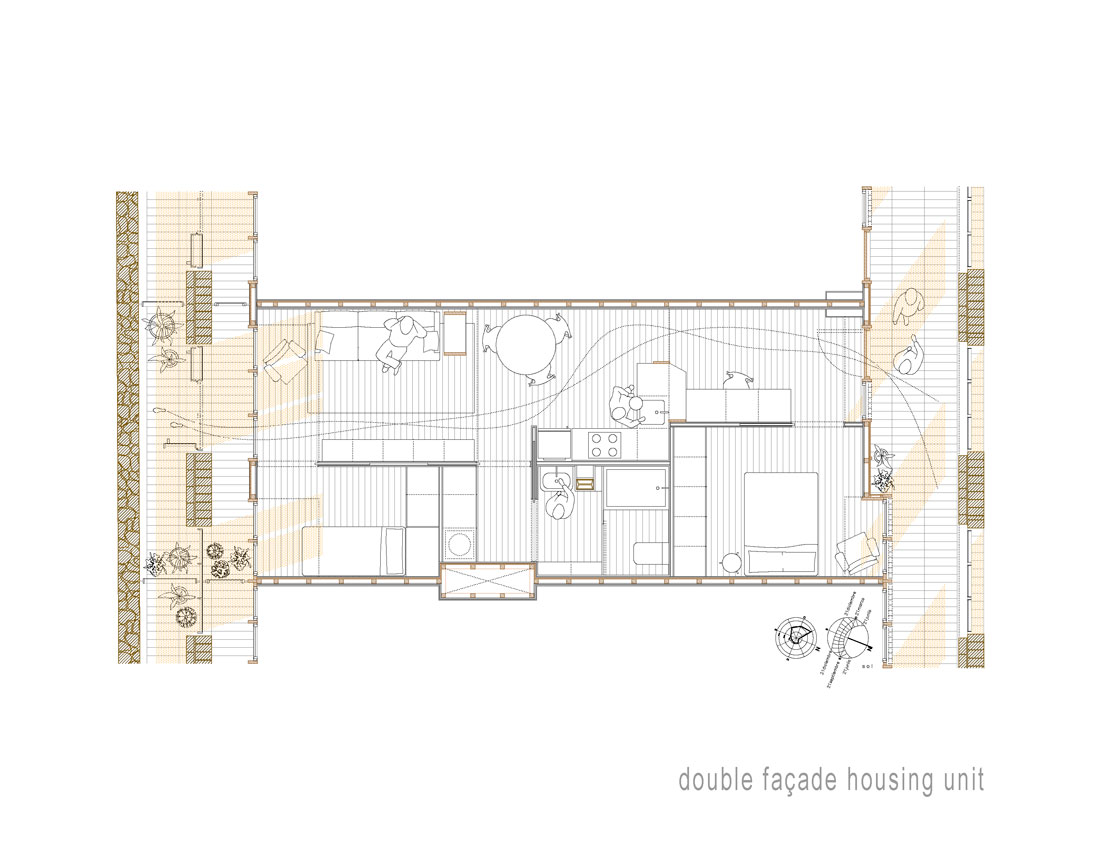 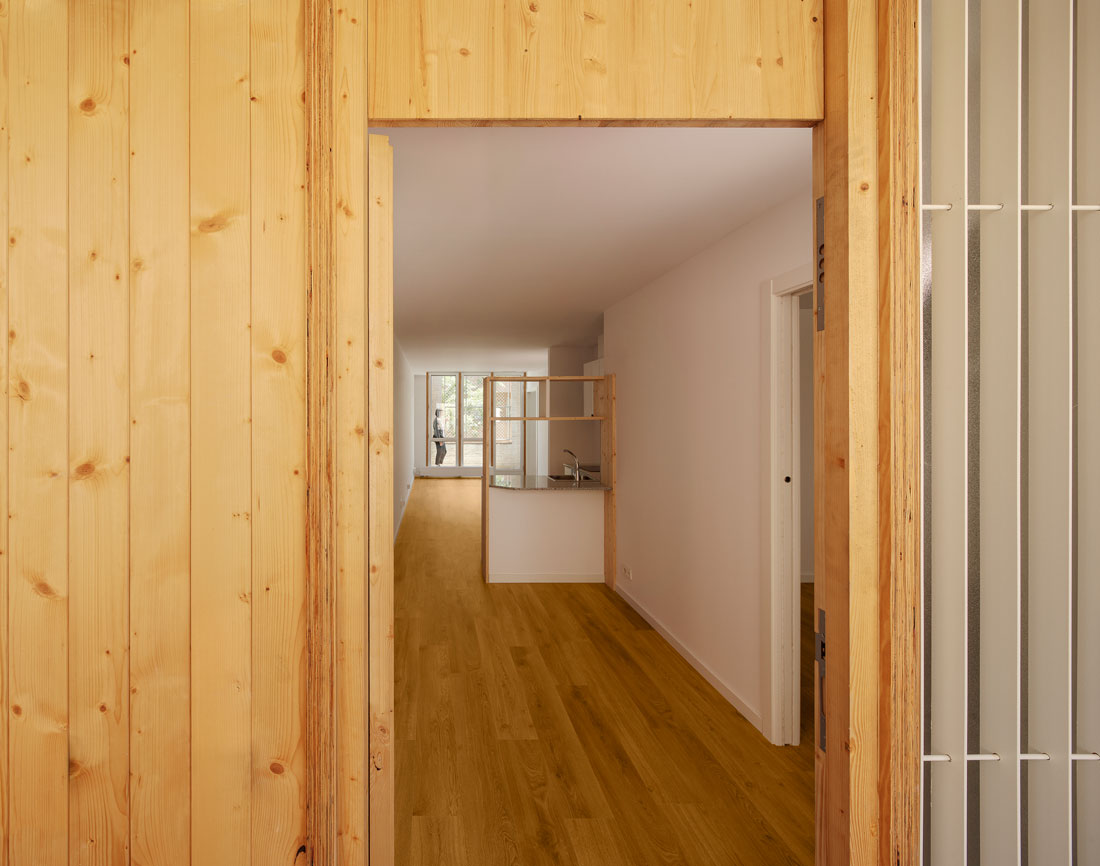 The new construction is by “assembly”. It is a dry and reversible construction made, like the adjacent building, from a limited number of materials: steel, wood and brick, all of them already existing in the original building. 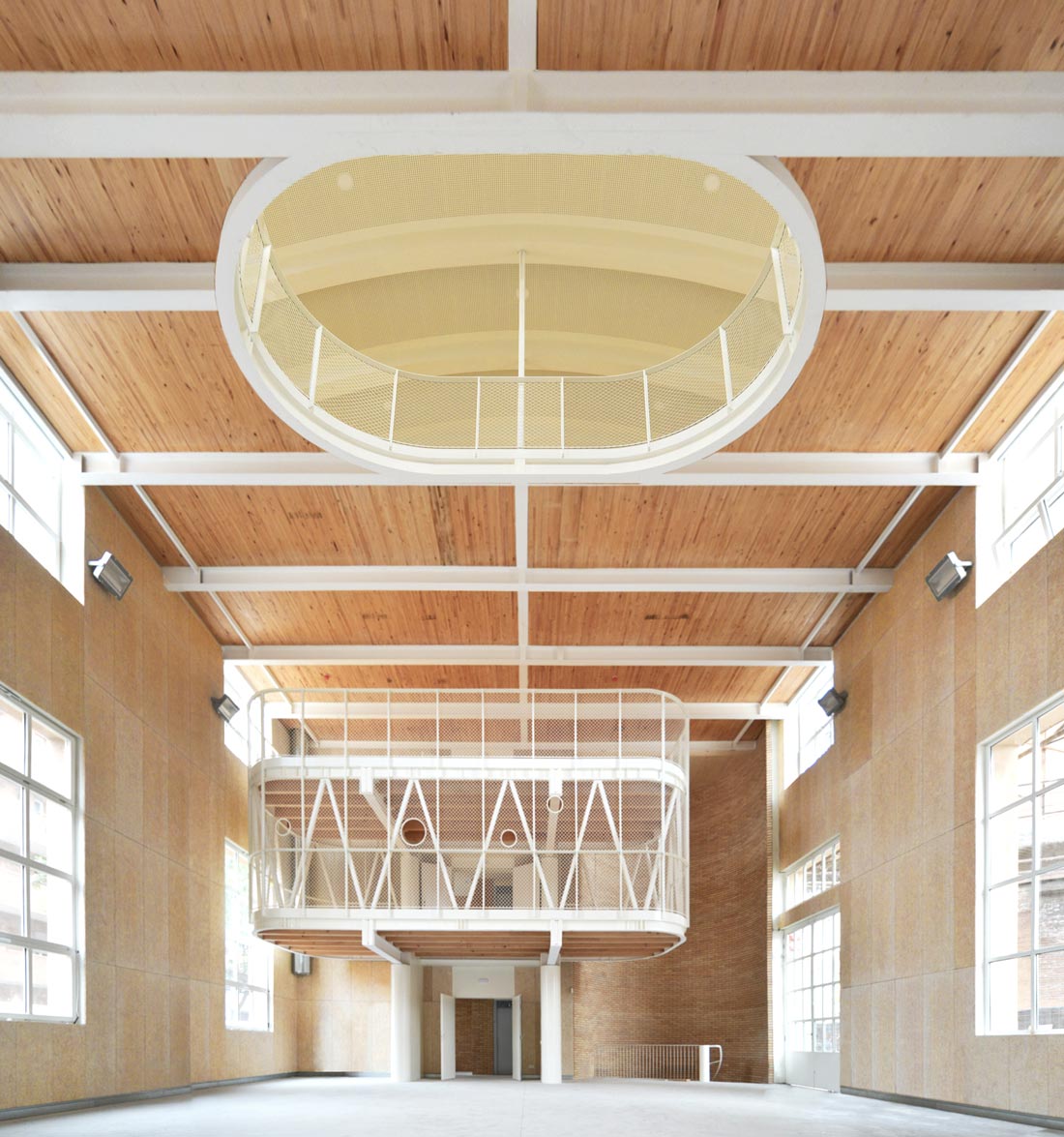 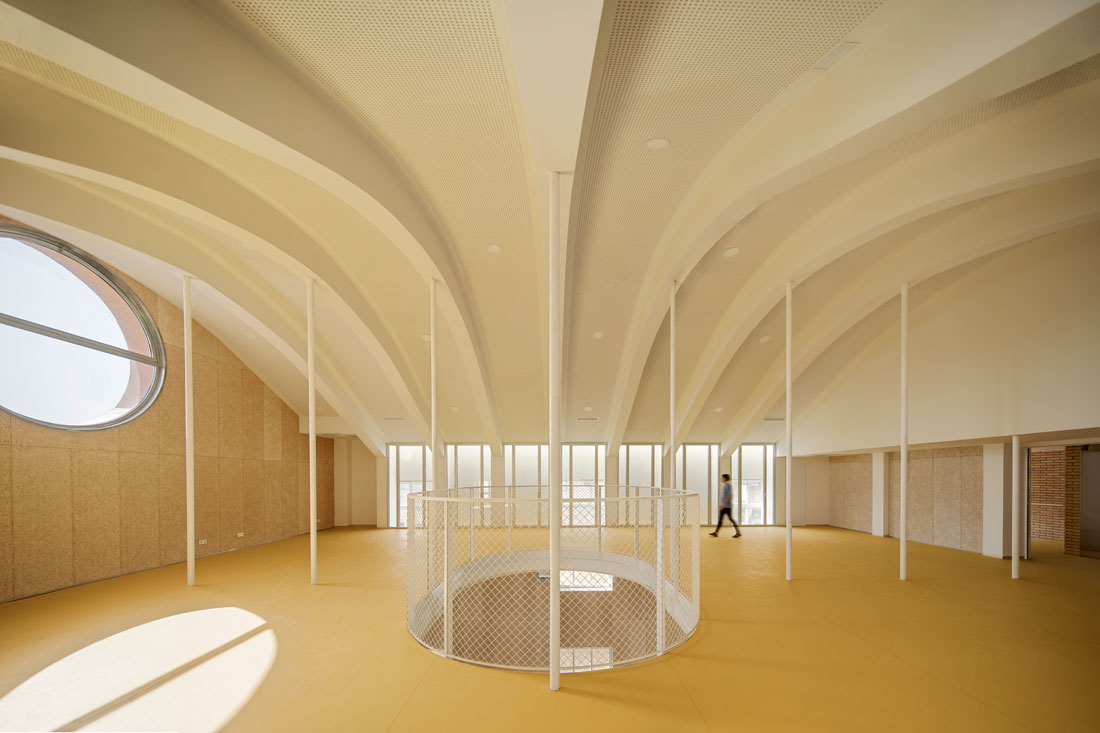 The existing building acts as a thermal buffer for the new construction. The 45-cm brick wall and the ceramic tile roof of the original building provide thermal insulation, and the façade of the upper room is separated from the original façade, creating an intermediate space through which the air circulates making artificial heating unnecessary for most of the year.