The opening of the new Experimentarium in Hellerup, Copenhagen, lets visitors experience an entirely new architectural setting that brings science and technology into focus – from the illustration of fluid dynamics on the façades, to the spectacular Helix staircase that meets the guests as a shining icon immediately upon passing the main entrance. The copper-clad stairway spirals up through the building and leads visitors onto four floors filled with new experiences. The significant refurbishment future-proofs a modern Experimentarium, resulting in a doubling of the exhibition area with a total of 16 interactive exhibitions. 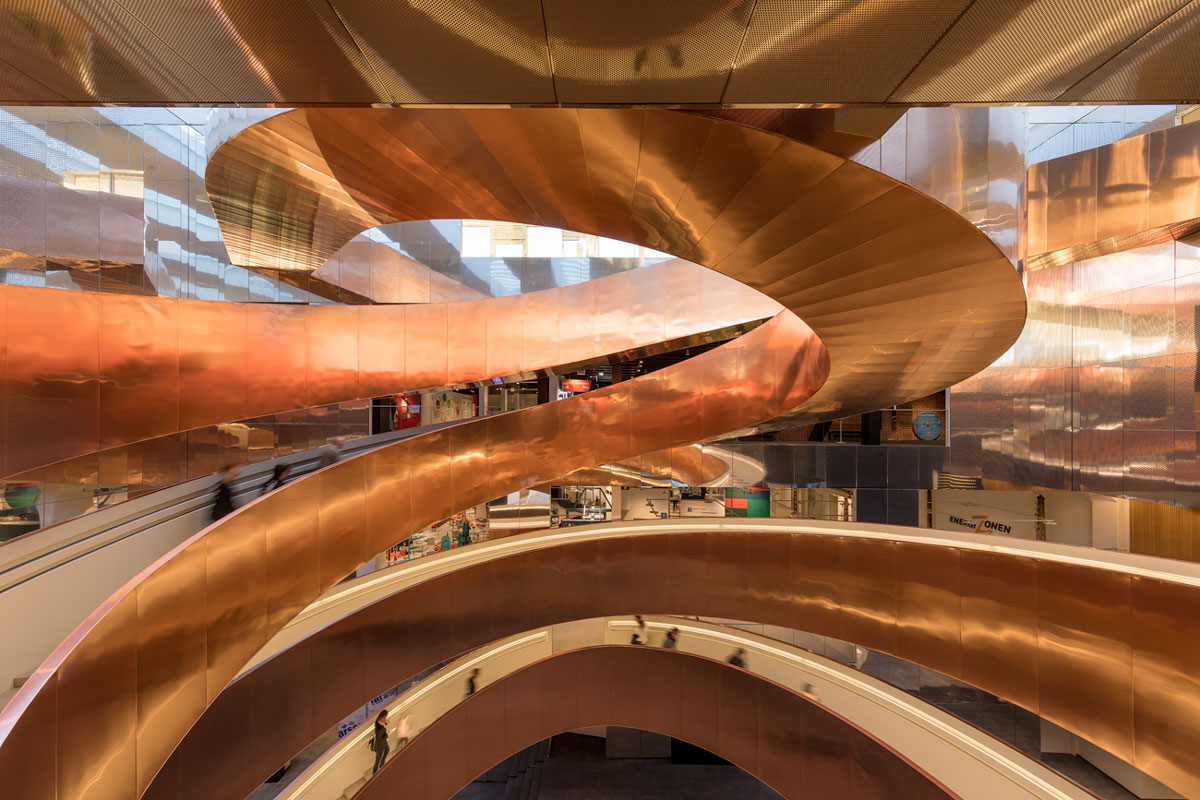 The new Experimentarium opens towards the City

“The aim of the design is a radical change of Experimentarium’s architectural expression. From previously being an introverted building to now appearing as an extroverted, engaging and vibrant attraction,” founding partner at CEBRA, Kolja Nielsen, explains.

Since 1991, Experimentarium has presented challenging and thought-provoking exhibitions in a setting that originally served as a bottling plant for the Tuborg brewery. 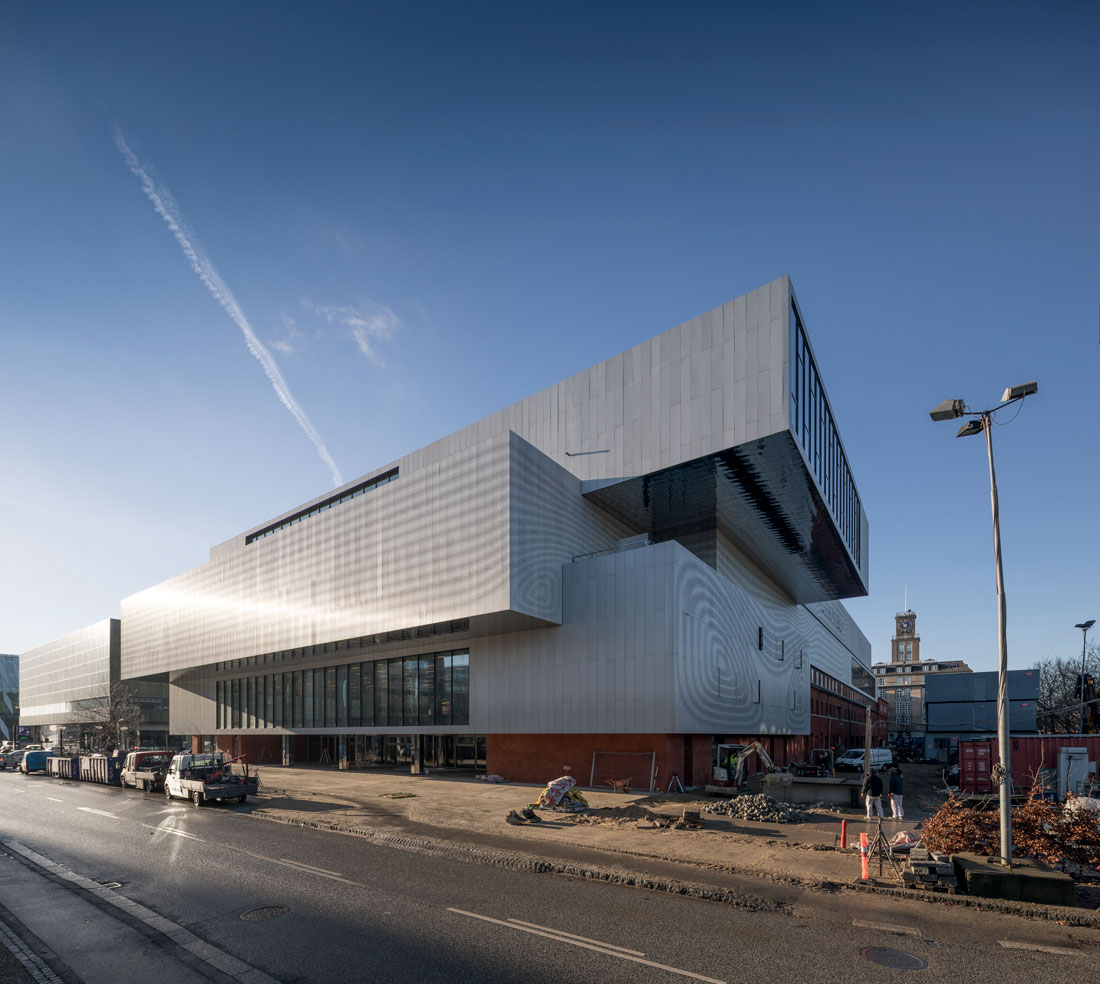 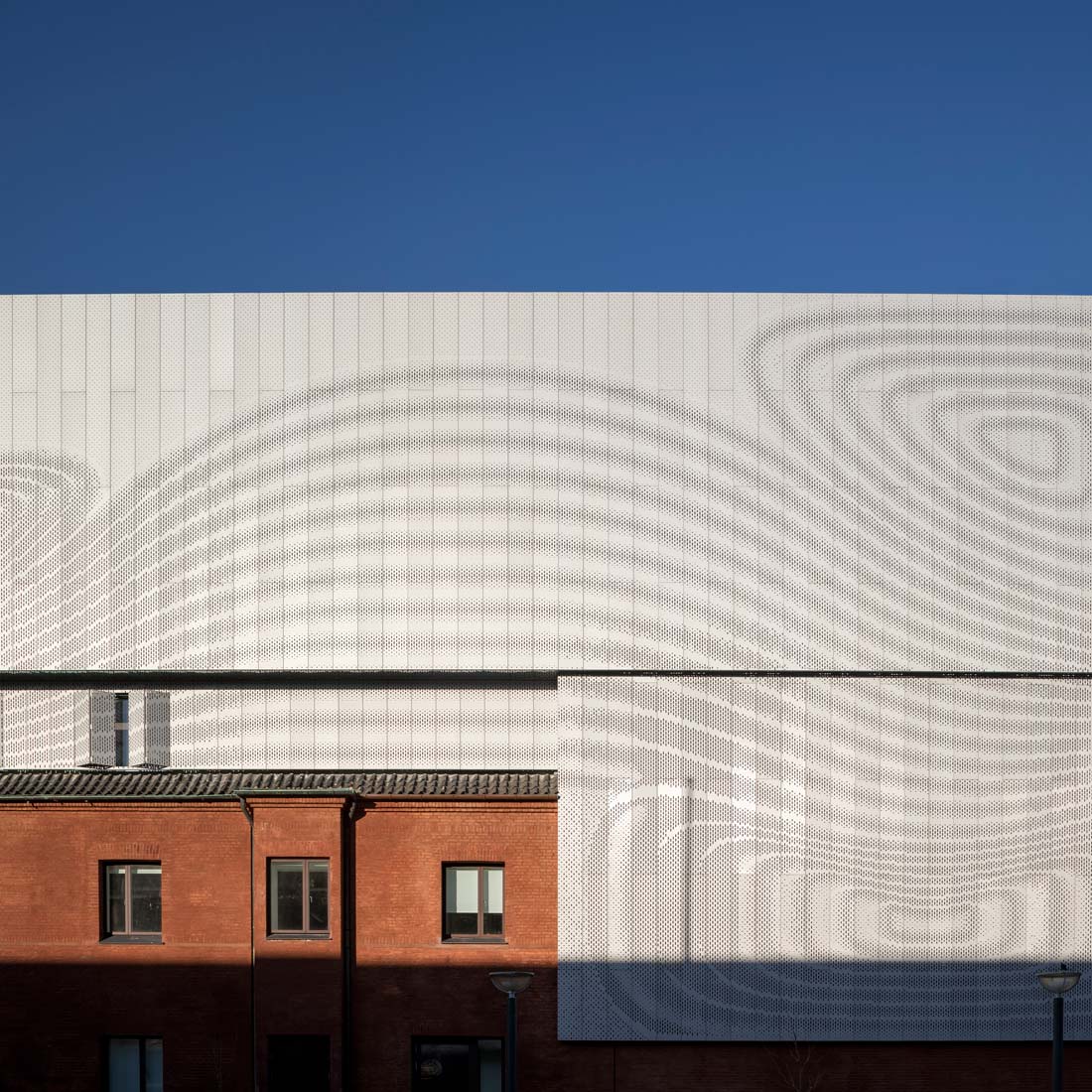 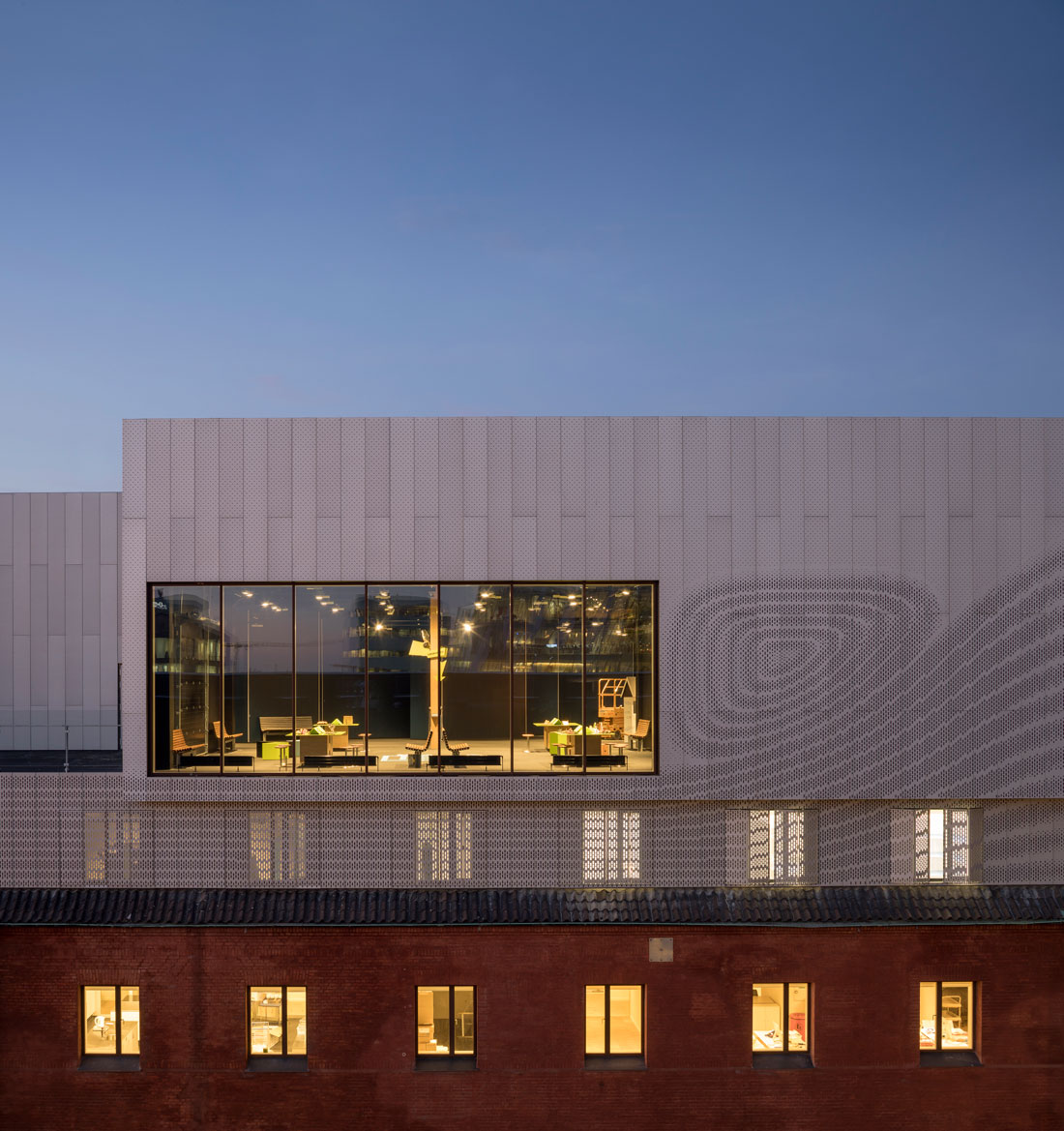 “Curiosity is the core element that Experimentarium is made of. We want to light a spark in children and young people, inspiring them to explore and understand our wonderful world. Now, this curiosity gets a new, spectacular, and flexible framework. We have doubled the exhibition area, and the roof terrace will strengthen Experimentarium as an all-year attraction,” Kim Gladstone Herlev, managing director of Experimentarium, adds. 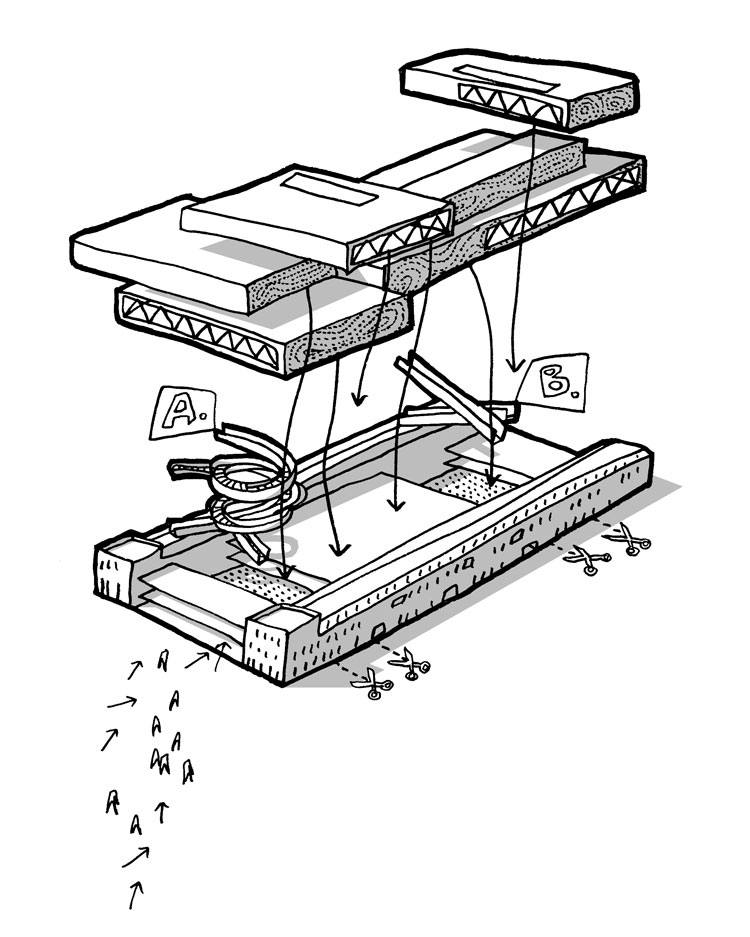 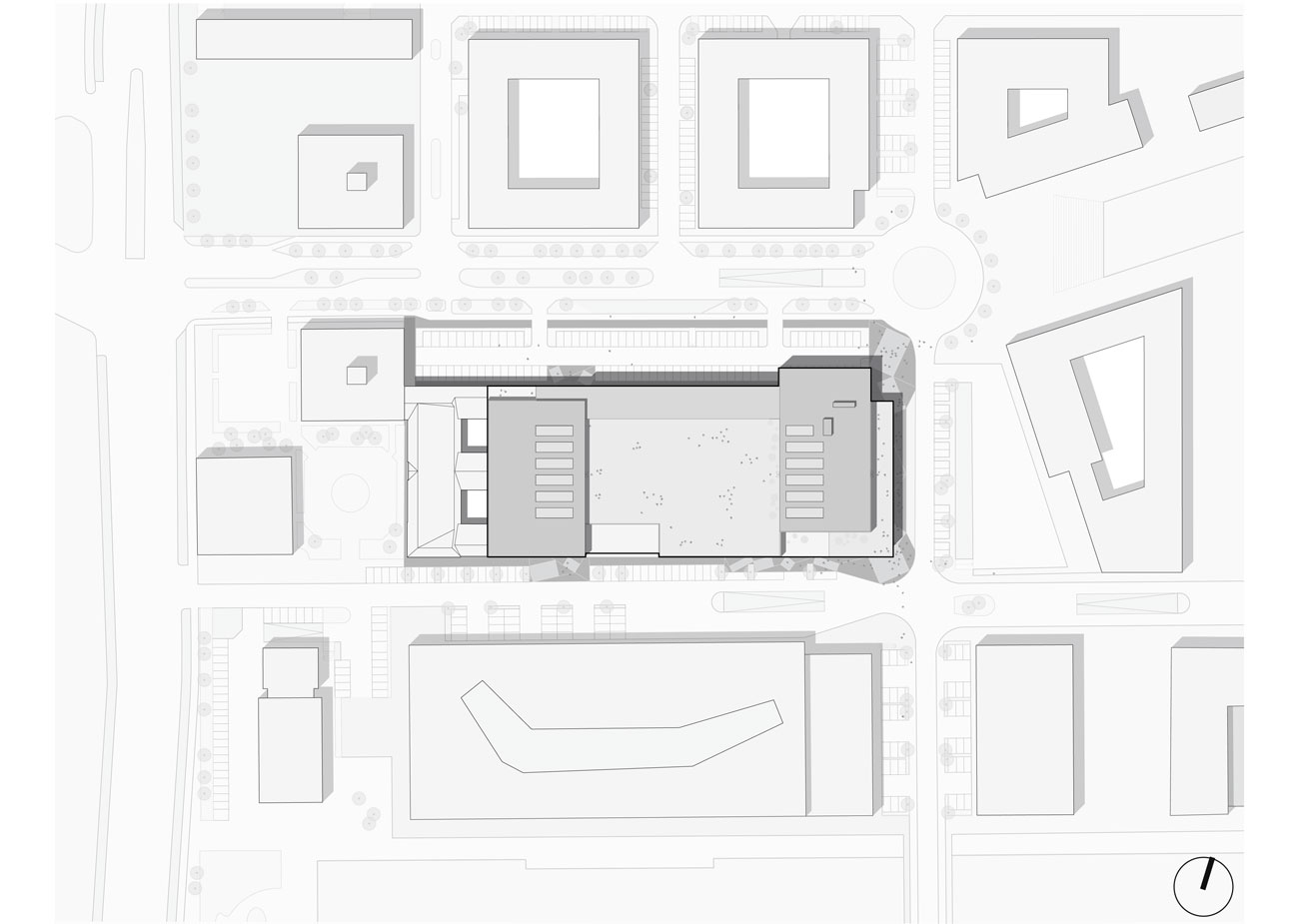 The building’s different functions are made visible to the city in the form of stacked boxes, which are offset from the base and open themselves towards their surroundings with large expanses of glass, creating a visual connection to the scientific universe inside. The boxes are clad with a lightweight façade of perforated aluminium panels, forming a contrast to the base, where the existing brickwork is preserved and emphasizes the meeting between old and new, between past and future, and between natural science and engineering. At the same time, the perforation creates a pattern that illustrates how the flow of air and fluid changes when it meets resistance. This façade narrative is developed in a close collaboration between Experimentarium and CEBRA. 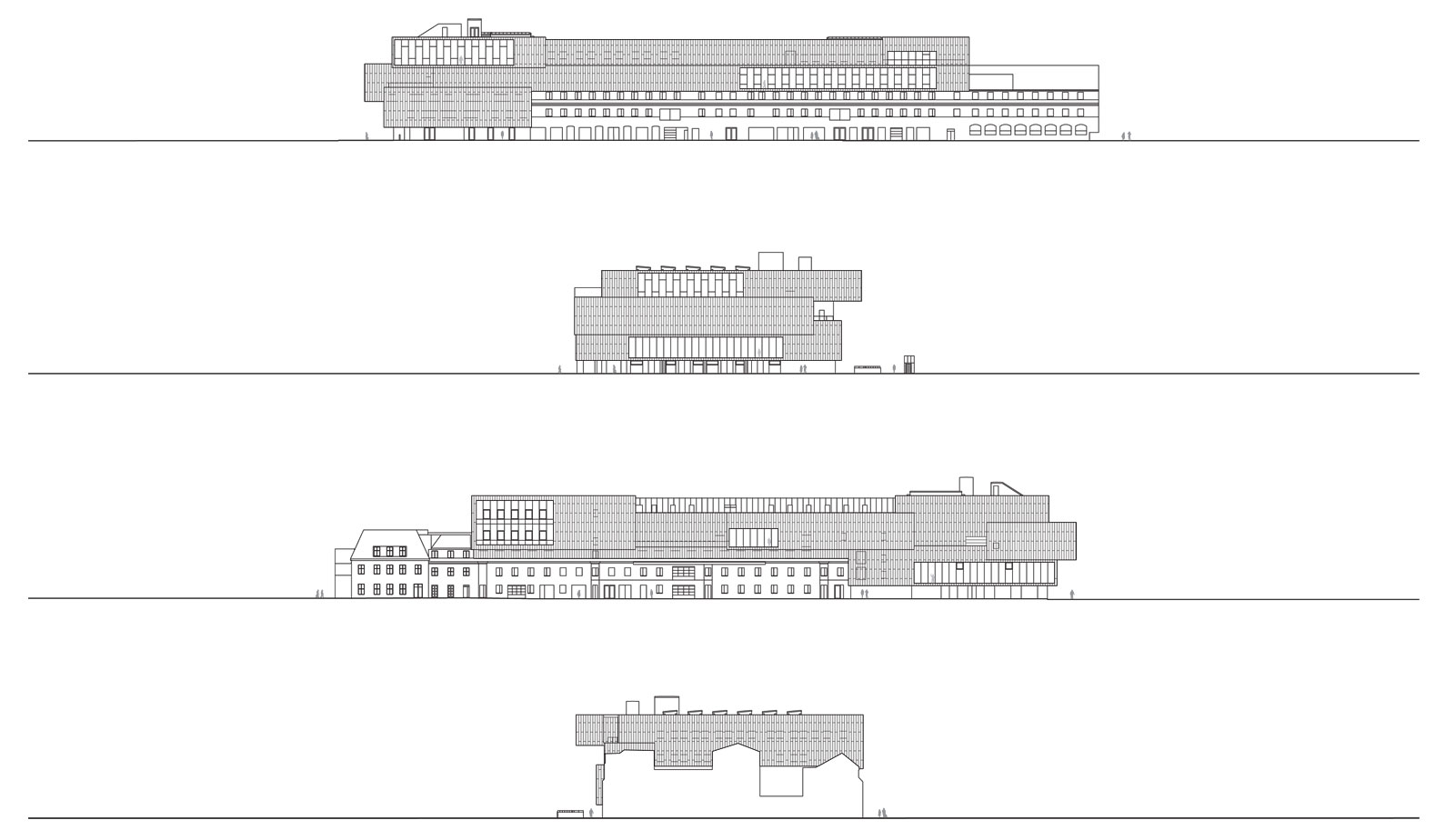 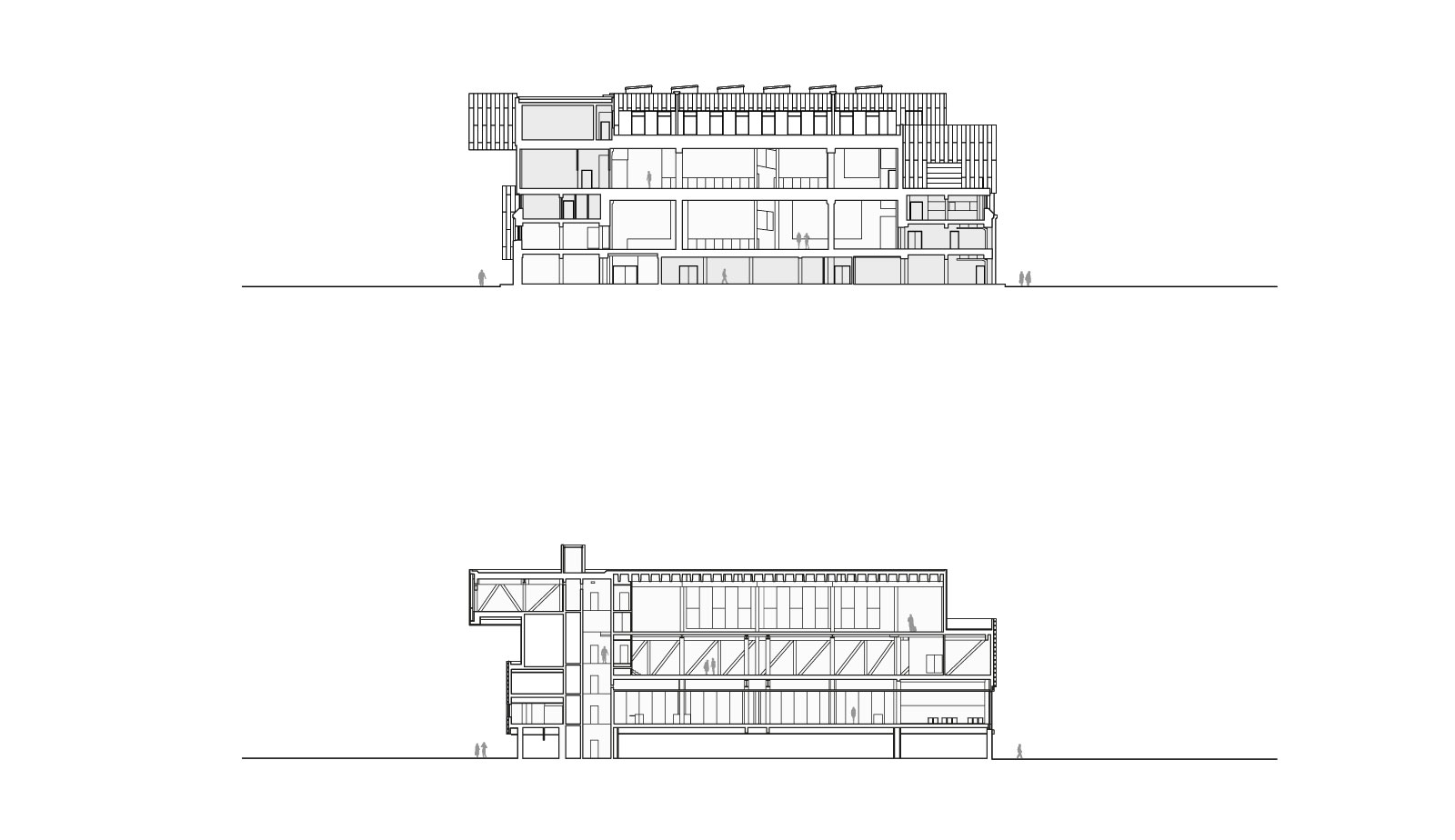 The first visitor experience is the Helix staircase that welcomes you with its radiating copper cladding as soon as you pass the entrance. Right away, it lets visitors know that they have entered a world of science. 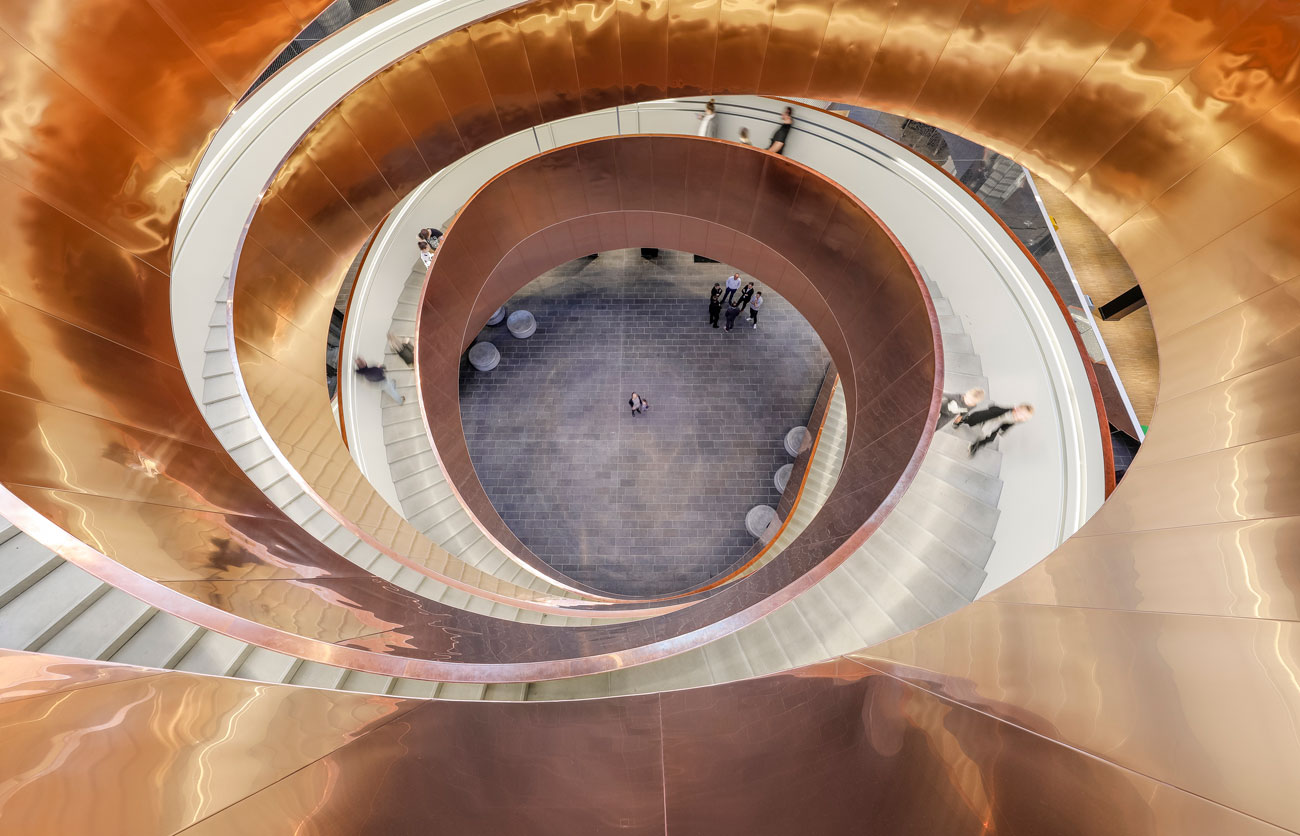 “The staircase ensures a good internal flow and creates coherence between the floors. At the same time, it substantiates the building’s scientific focus,” Kolja Nielsen explains. He continues: “During a workshop with Jakob Bohr, a professor at DTU Nanotech, we were inspired to work with the stairs as an abstract version of the DNA strand’s structure. And so, the idea for the Helix staircase was born.”

The 100m-long staircase is built from 160 tons of steel and clad with 10 tons of copper. 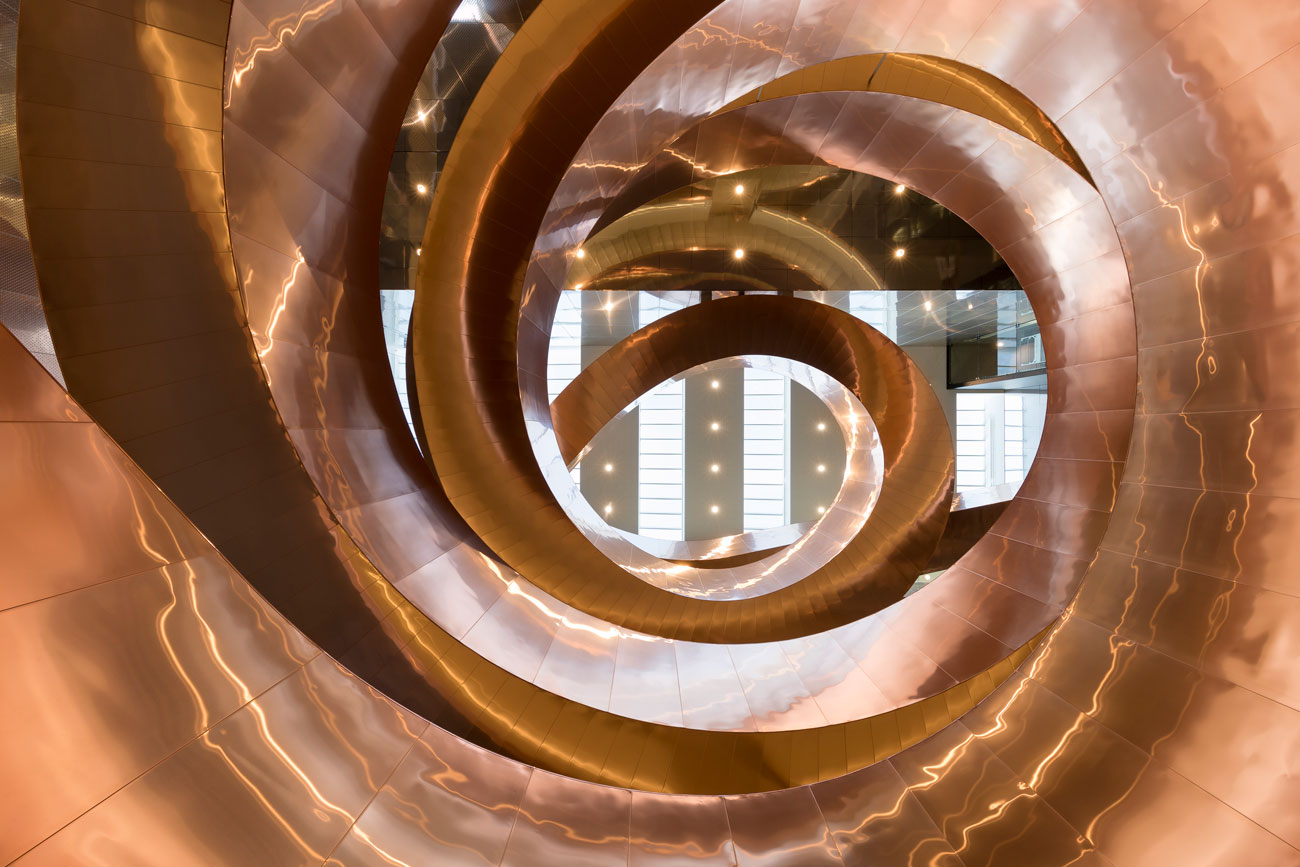 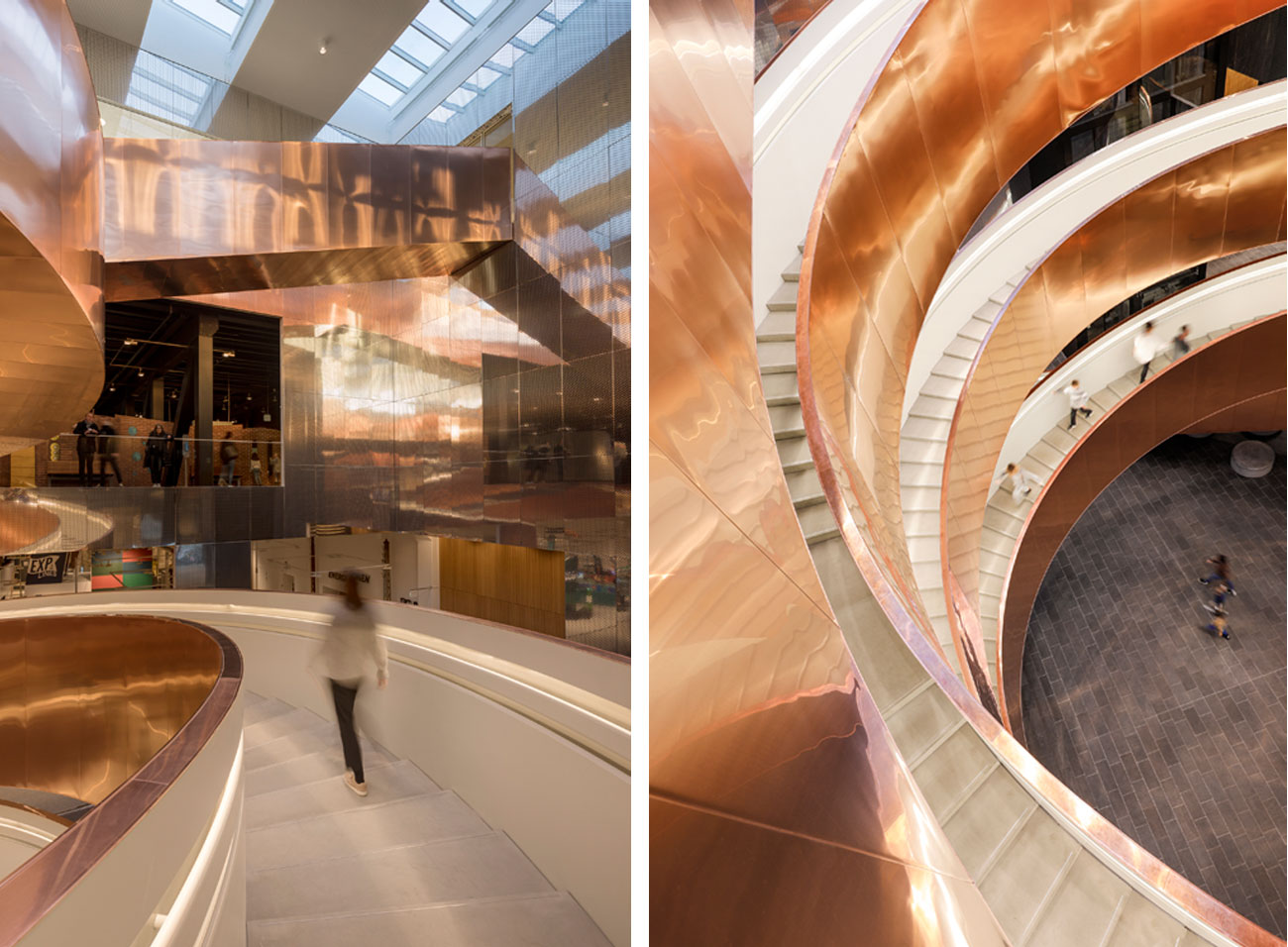 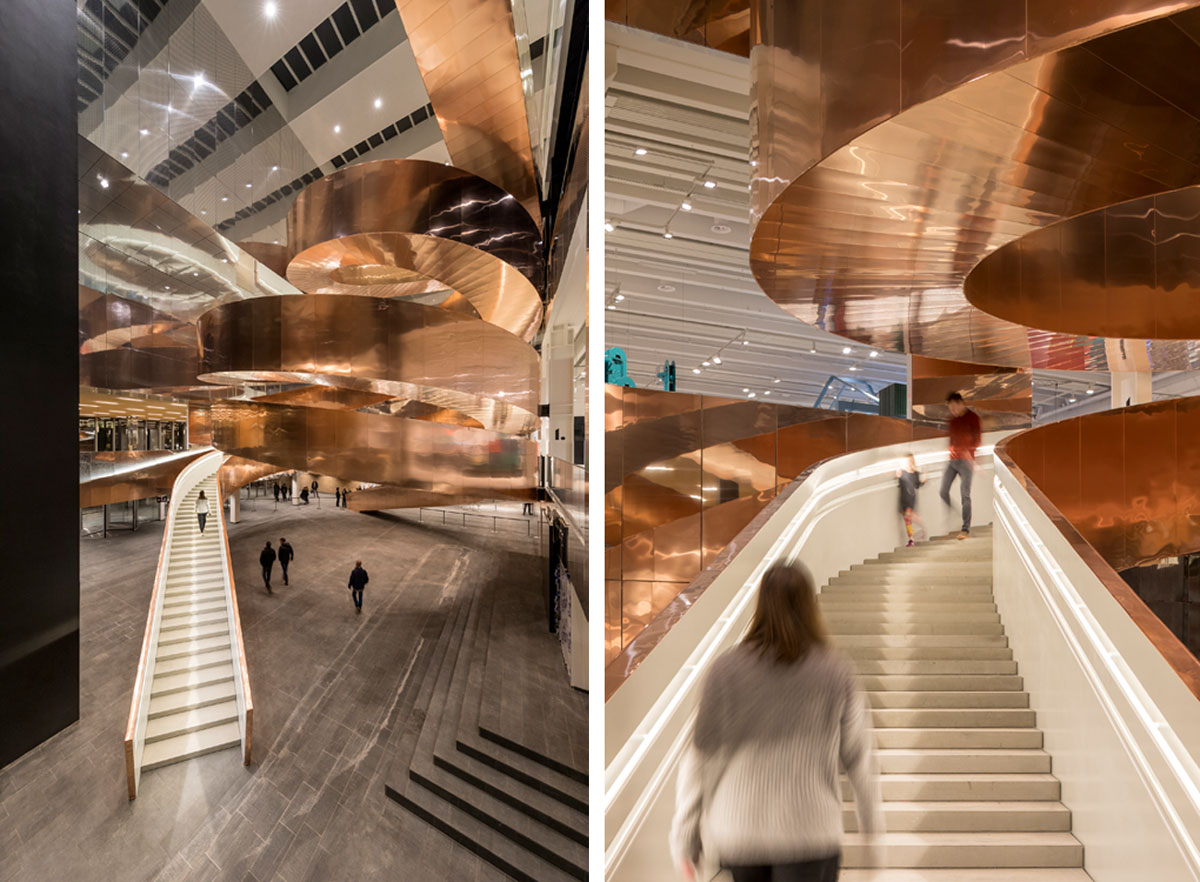 Back in 2011, CEBRA won the international architecture competition to design the new Experimentarium. Besides doubling the exhibition area, the refurbishment includes a large roof terrace, which opens for activities during spring 2017, modern staff facilities with visual contact to the visitor areas, a large café and a picnic area, a convention centre, teaching facilities and a series of workshops. 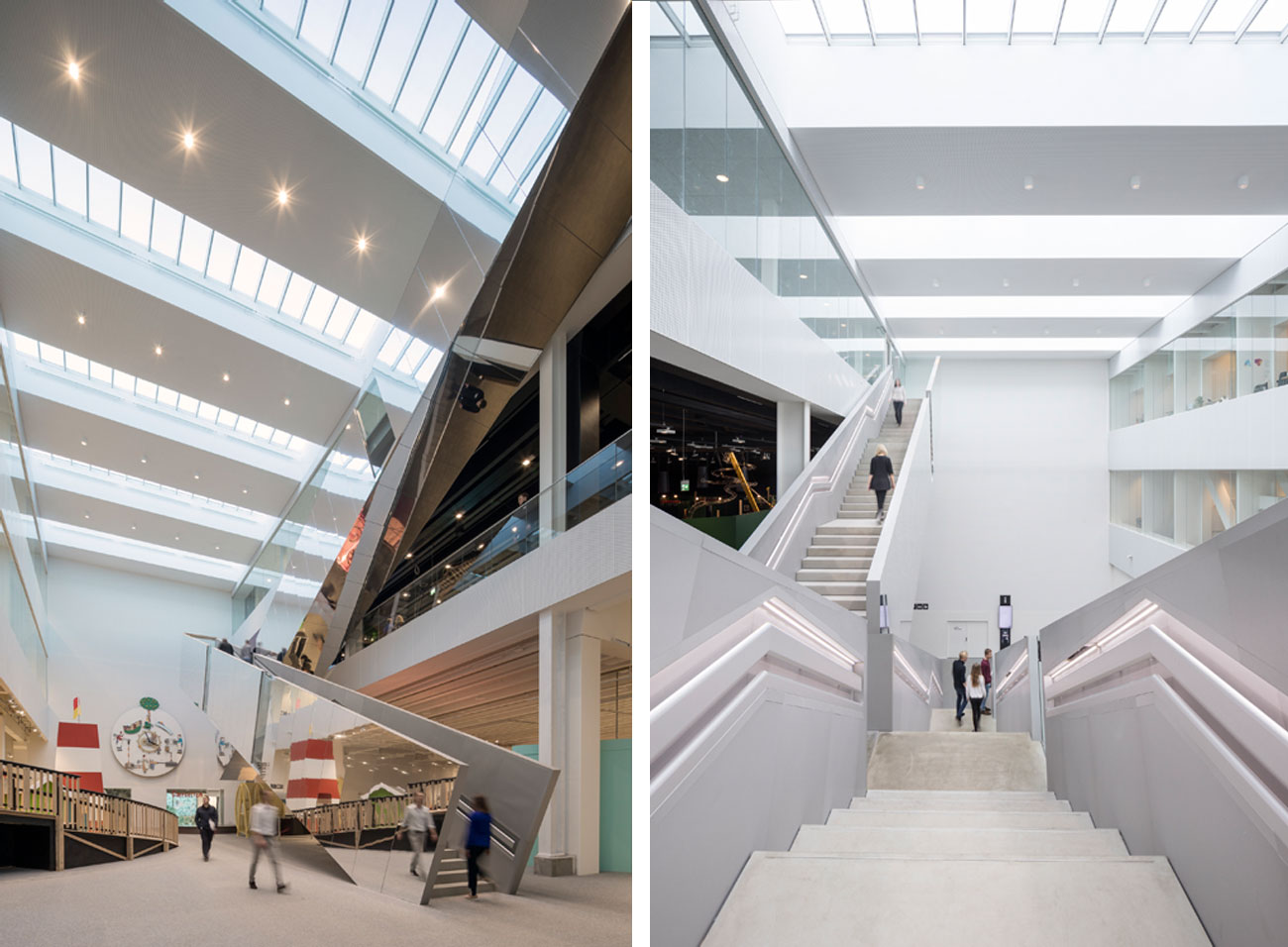