Evry Social Housing: The South in the North

The Project The South in the North responds to the demand for urban redevelopment of the RZ block, inside ZAC Centre-Ville sector in the city of Evry, France. It includes 41 social housing units, 314 units for free sale, 72 units to house young police officers in the D3 tower, and parking in a neighborhood undergoing intense urban transformation. 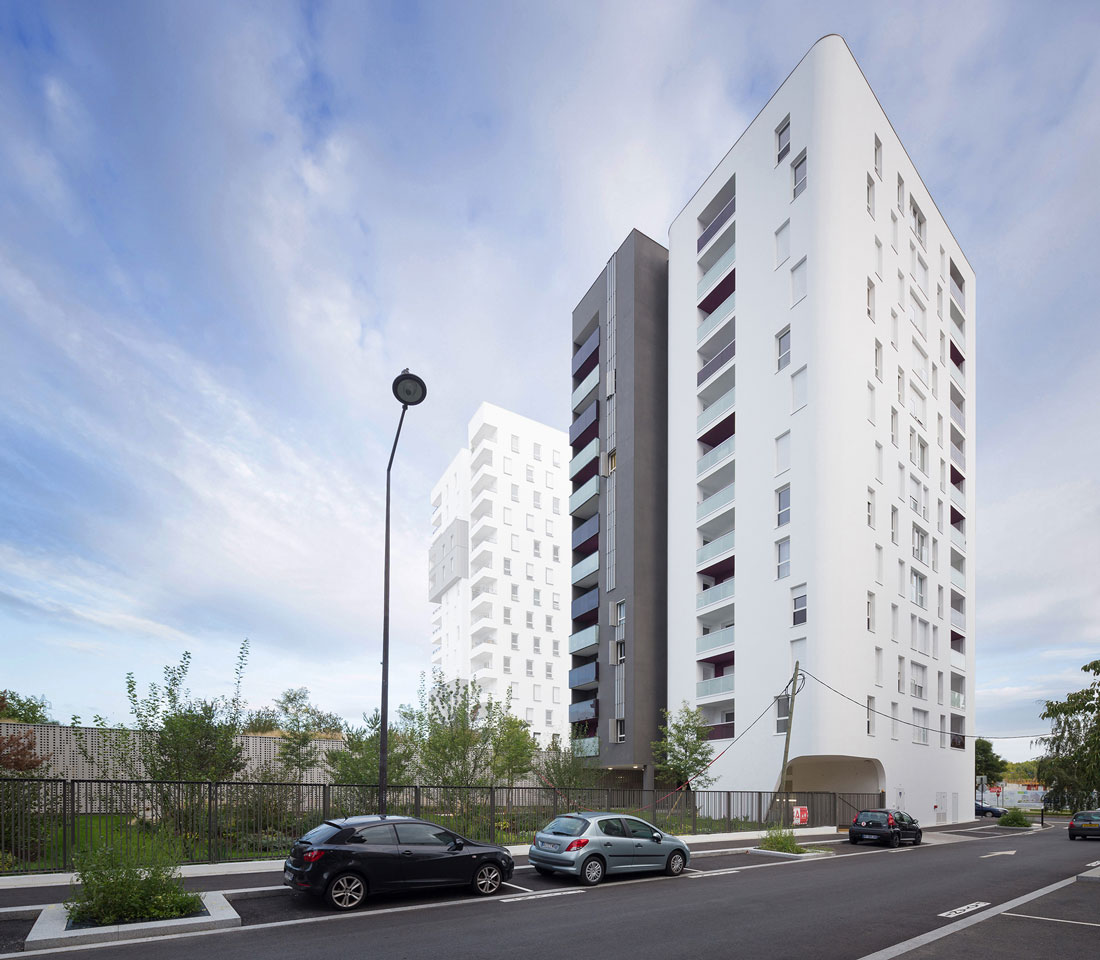 The South in the North

Restructuring the building responds to the aim of bringing more light into the heart of the block and along the Boulevard François Mitterrand. With this main intention as the main discursive argument, the volumes of the block are graded in height from the human scale of three or four levels in south to a more powerful urban scale that rises to sixteen floors in north. Subsidiary, but not less important, we manage to liberate a maximum of undeveloped land and embed the project into the landscape, while ensuring good natural lighting. 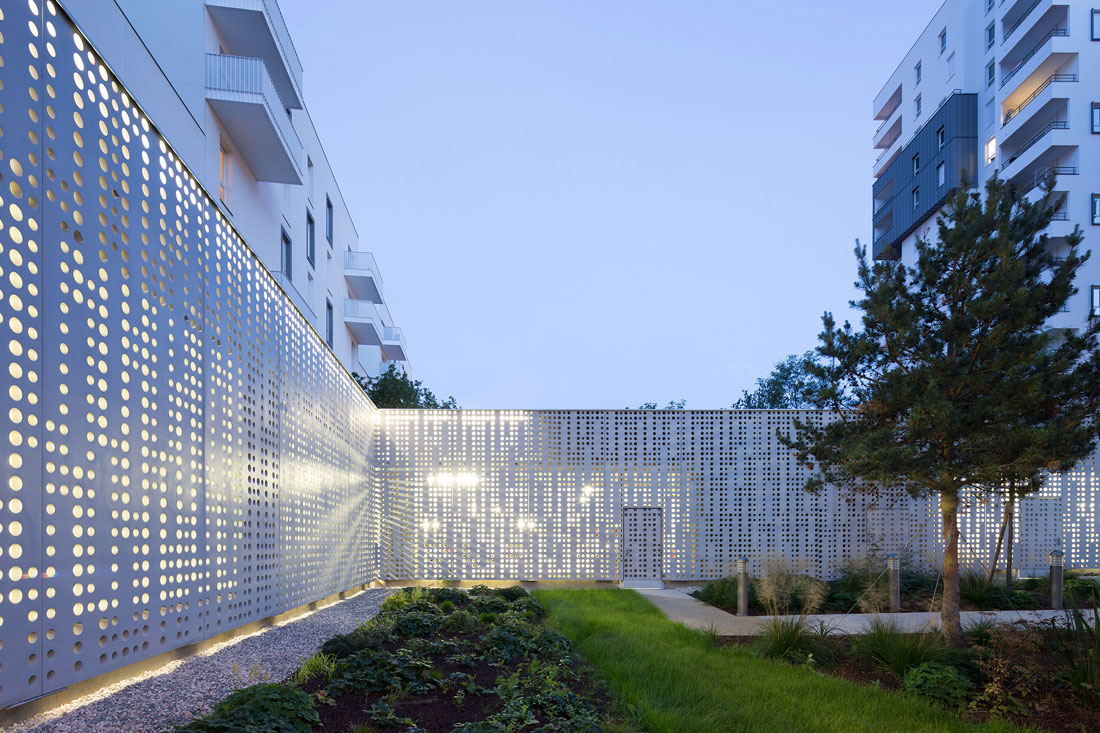 Among the different buildings, there is a tower called D3, a 13-story social housing building that sits on the corner between Boulevard François Mitterand and rue André Lalande. This tower also benefits from the fact that the big basement on the ground floor that contains the parking lot is set back 25m from the road, which leaves room for the creation of a garden along the south façade. This garden is reached from the ground floor of the tower and through the strategically located doors to the parking area. 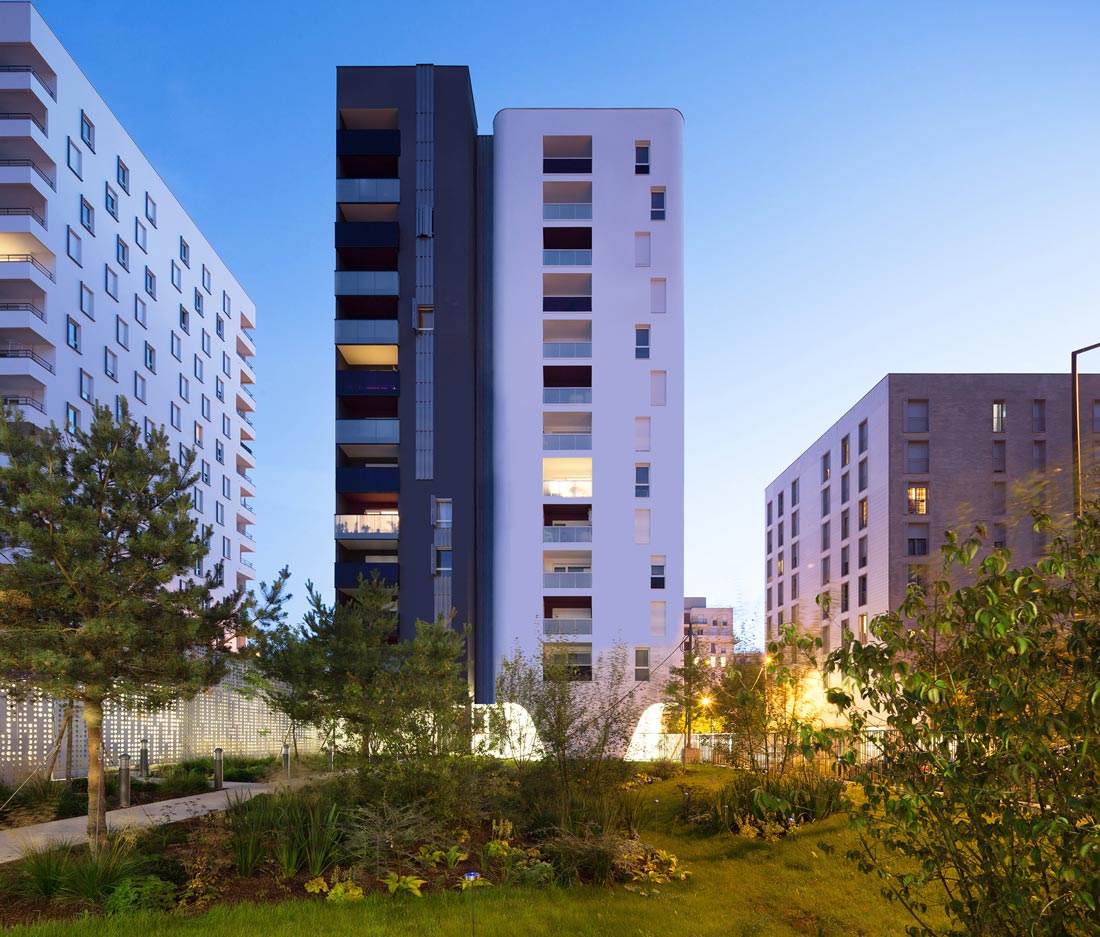 The routine and the social cohesion

One of the most significant elements of the project is the “breakage” of the housing volume into two parts. One part, finished in gray, is a parallelepiped with clear-cut edges. The other is less regular with rounded edges and, by contrast, it is finished in white. The two-fold intent of this strategy is to bring natural light into the common circulation areas while, at the same time, breaking up the proportions of the building as a whole to emphasize the beauty of the façades.

A piece of high-performance Ductal concrete has been installed as a façade for the parking area above the garden. This allows for a minimum thickness of the material, as well as substantial perforations of the plane, which lets natural light onto the path to the car park. We believe that this strategy of dignifying the spaces of routine daily circulation will stimulate meetings between residents and equalize social cohesion, acting as “private shared spaces” (PSS), or spaces that favor relationships.

Throughout the building there are loggia balconies that double as handrails, combined with white crystal, violet crystal and painted walls. This combination also occurs on the roofs of the balcony areas, creating a dynamic and de-standardized effect. As for the shutters, in addition to protecting from direct sunlight, they help to give life to a façade marked by the linearity of the windows. Finally, in the context of social housing on the outskirts of the city, this type of compositional mechanism provides the appearance of quality for a type of architecture that has to adhere to a very tight budget.

One element that runs through the project is the occasional use of a strong color. Beyond the choice of one color in particular, we are interested in the process of how residents will identify with the building. This color is found in different areas of the building’s entrance, which has a particularity a large double-height space that receives residents and a looks out across the street toward the garden. 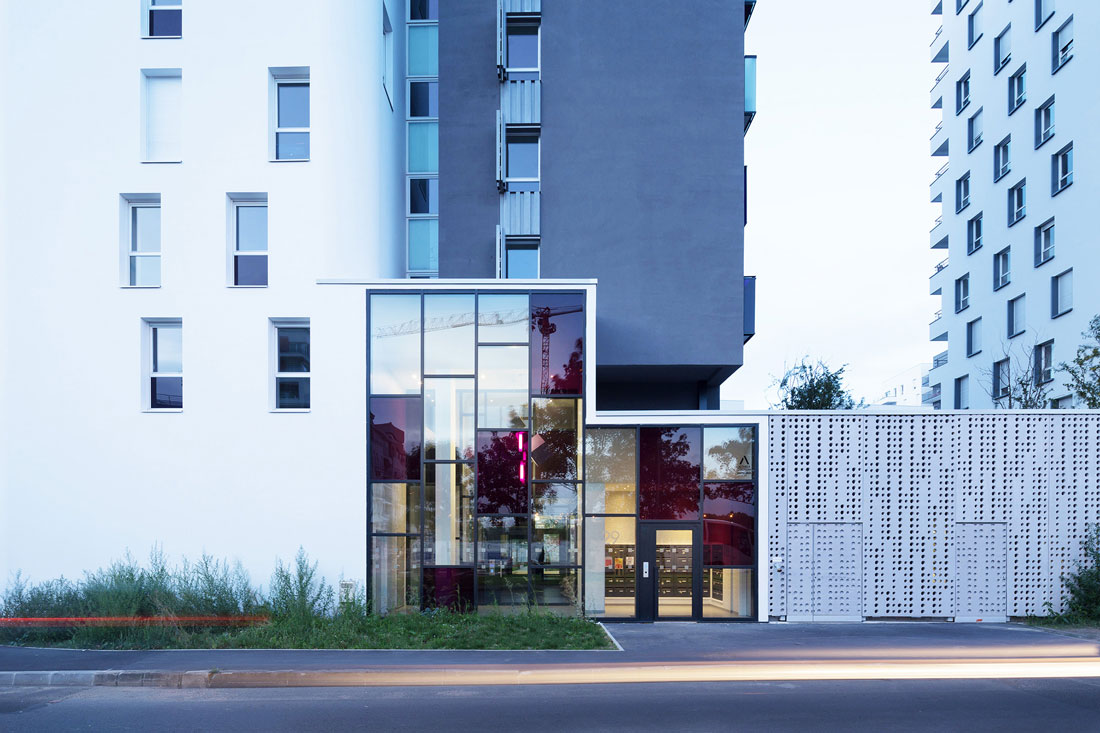 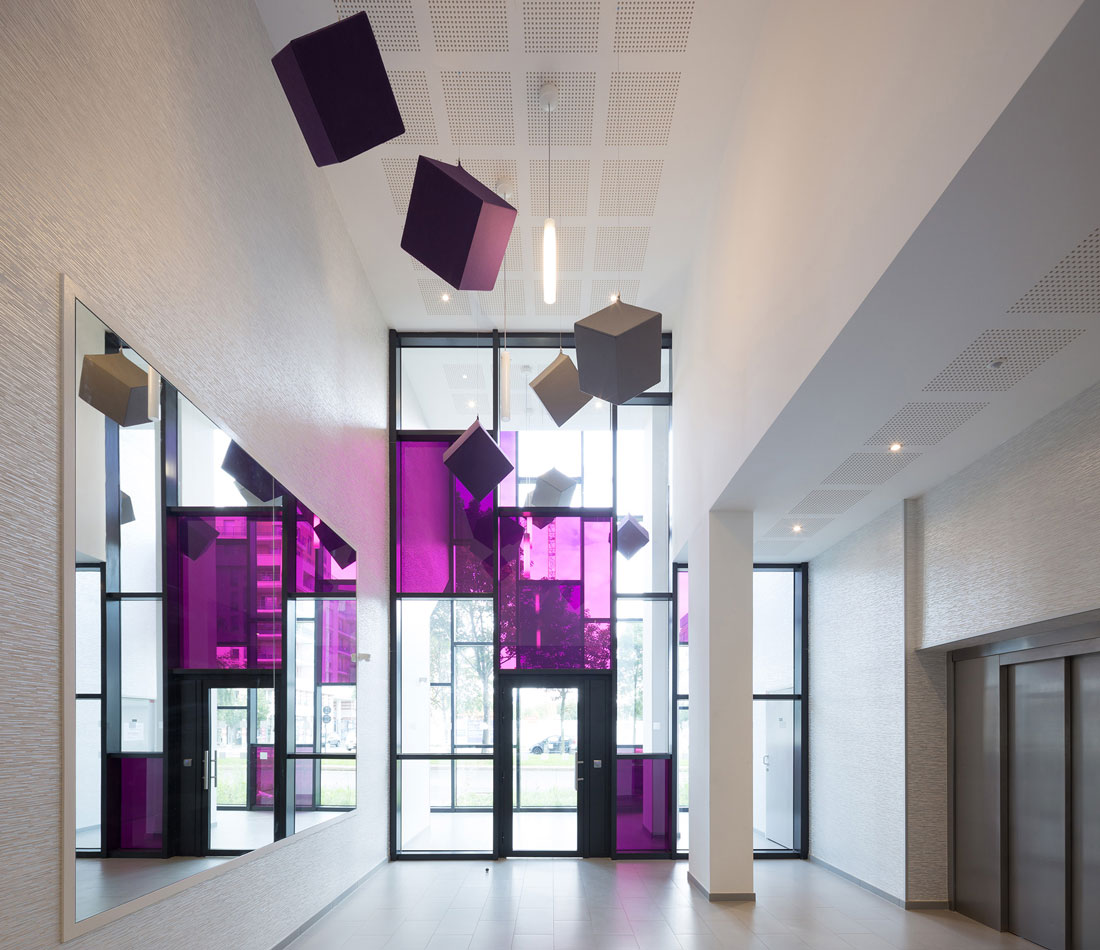 The proposal integrates the human vector and the time vector and is dedicated to the quality of living, the appropriation of co-owned communal space to favor exchange and social cohesion.

The program of this project does not include any commercial or other activity on the ground floor, and very little housing. Therefore, the block’s genetic blueprint consists of a reflection on the basement. The parking lot that emerge from the interior of the block enables a connection between the different buildings, thus encouraging a homogeneous urban reading of the ensemble. The creation of a parking lot in the basement is also a way of controlling the overall cost of the operation, minimizing the necessary earthworks.
. 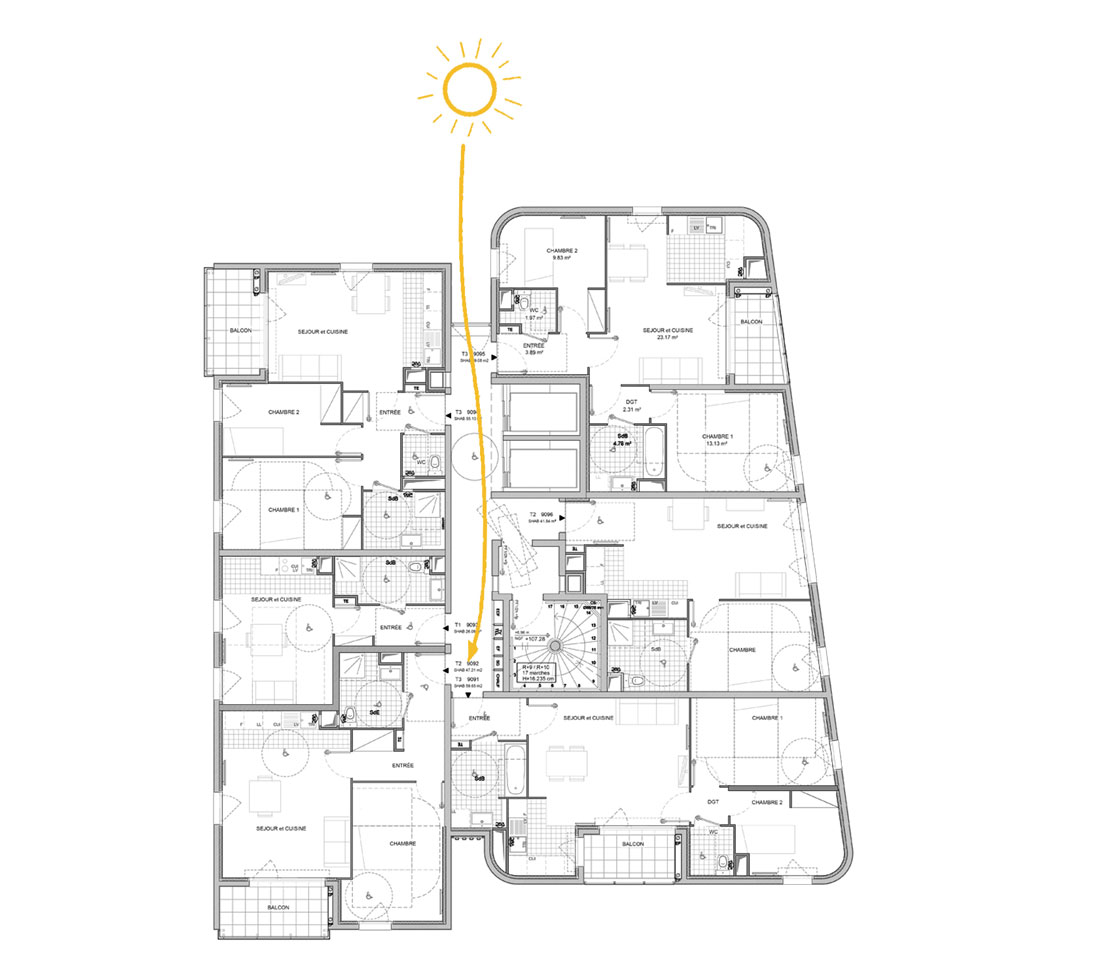 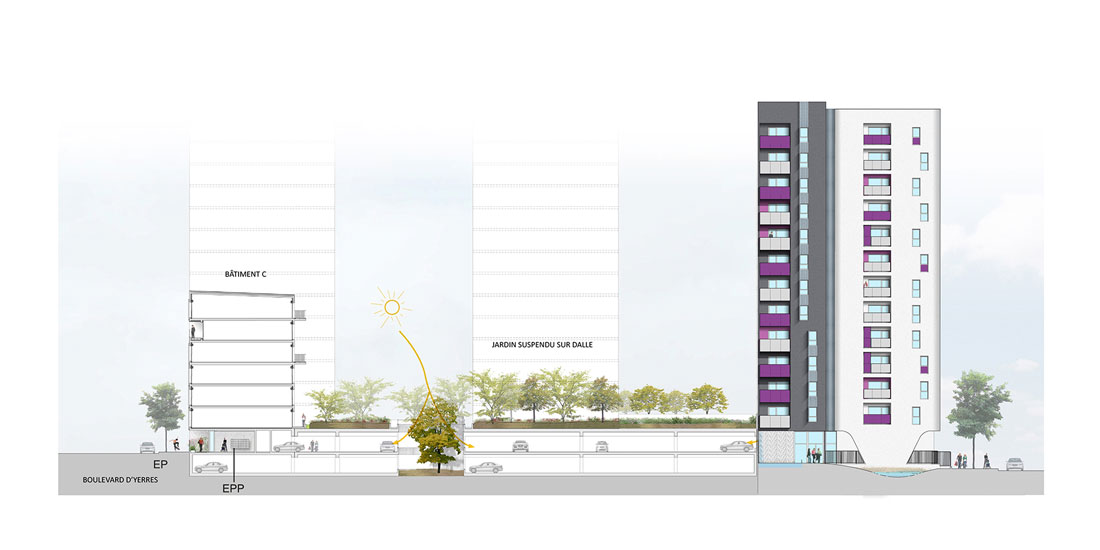 « How Food Will Reshape Our Cities: An Overview from Sasaki Architects
SLICE: A New Urban Living Solution »