Digital visibility is key for cities building a global brand.

Europe’s most talked about cites

Over 300 global city indices benchmark cities on almost every aspect of urban life. These rankings influence investment, where talent clusters and our travel choices. However, there is little comparative research into the impact digital messaging is having on cities as brands.

Responding to this, ING has reordered Europe’s Top 40 cities, based on global city indices, by their share of the online conversation and provided some analysis on which cities punch most above their weight and which show the most potential for increasing their digital profiles.

“Visibility matters to cities, influencing investment, where talent concentrates and whether we decide to visit or not. The challenge is to ensure the quality of conversations happening across all forms of media – including digital – helps each city to not just climb the rankings, but also activates its unique story.”

– London and Paris share almost a third of the online conversation for the Top 40 cities.

– While London leads both city and digital mention rankings, Paris is ahead on total social media mentions.

– More than half of Top 40 cities show a strong correlation between city rankings and online mentions.

– London, Paris, Moscow, and Istanbul lead for Instagram snaps, being captured roughly twice as many times as any other city.

– Cities featured from the UK (5); France (2) and Spain (2) are collectively responsible for over half of all mentions in the Top 40.

– Italy (1 city) generates slightly more traffic than Germany (4), highlighting the unequal distribution of mentions between not only cities, but also countries. 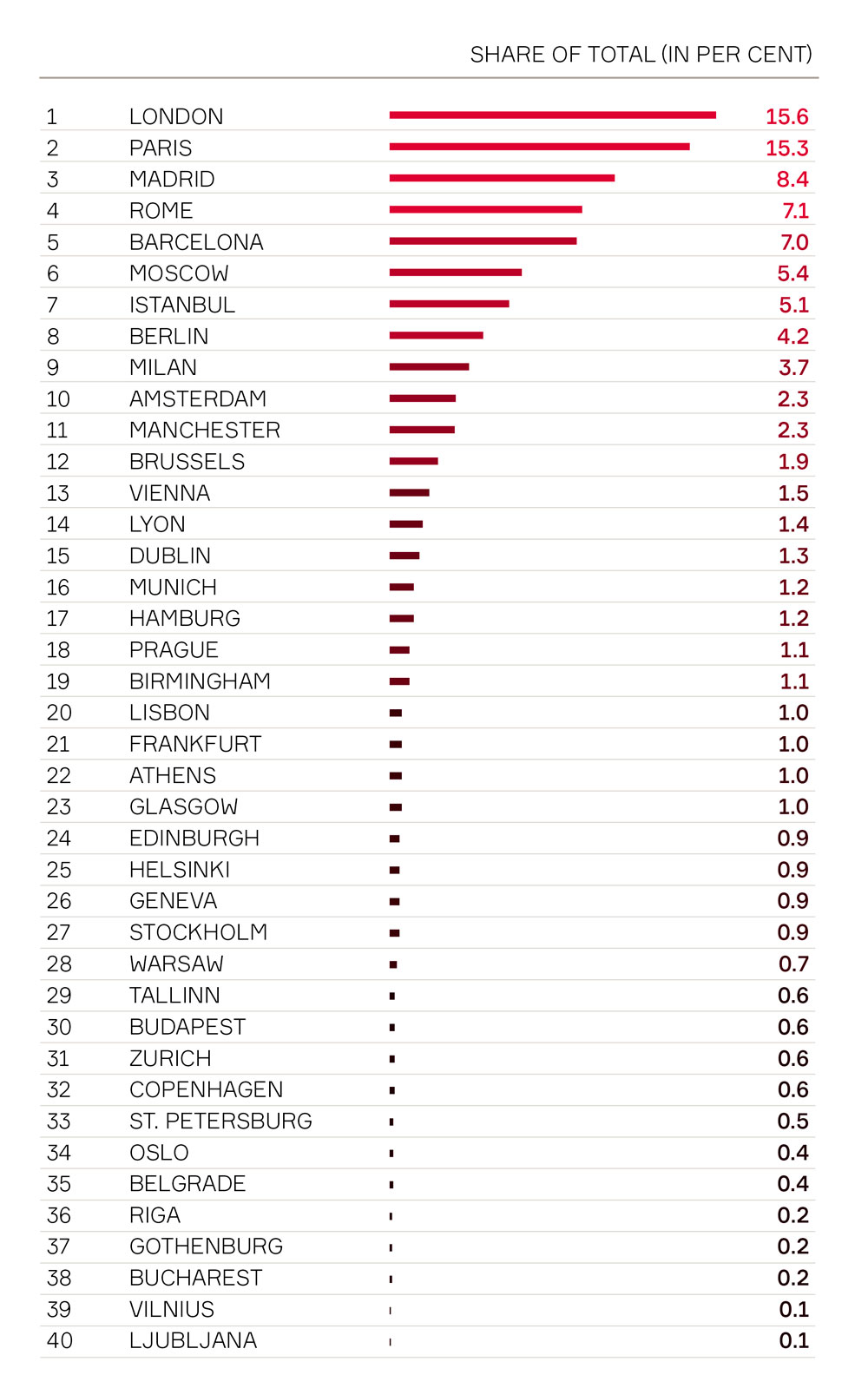 While the share of the conversations by category for the top five cities are substantially similar, London’s dominance as Europe’s financial centre is reflected in having higher shares in the business and talent categories. Madrid and Barcelona feature more strongly in technology.

Several European cities not featured in the Top 40 by global city indices rank highly for digital mentions. Porto and Liverpool, for example, have digital mentions similar to Amsterdam, while some cities in the UK, Germany, Italy and Poland produce online mentions comparable to Copenhagen and Oslo, potentially presenting an opportunity to challenge global city rankings. 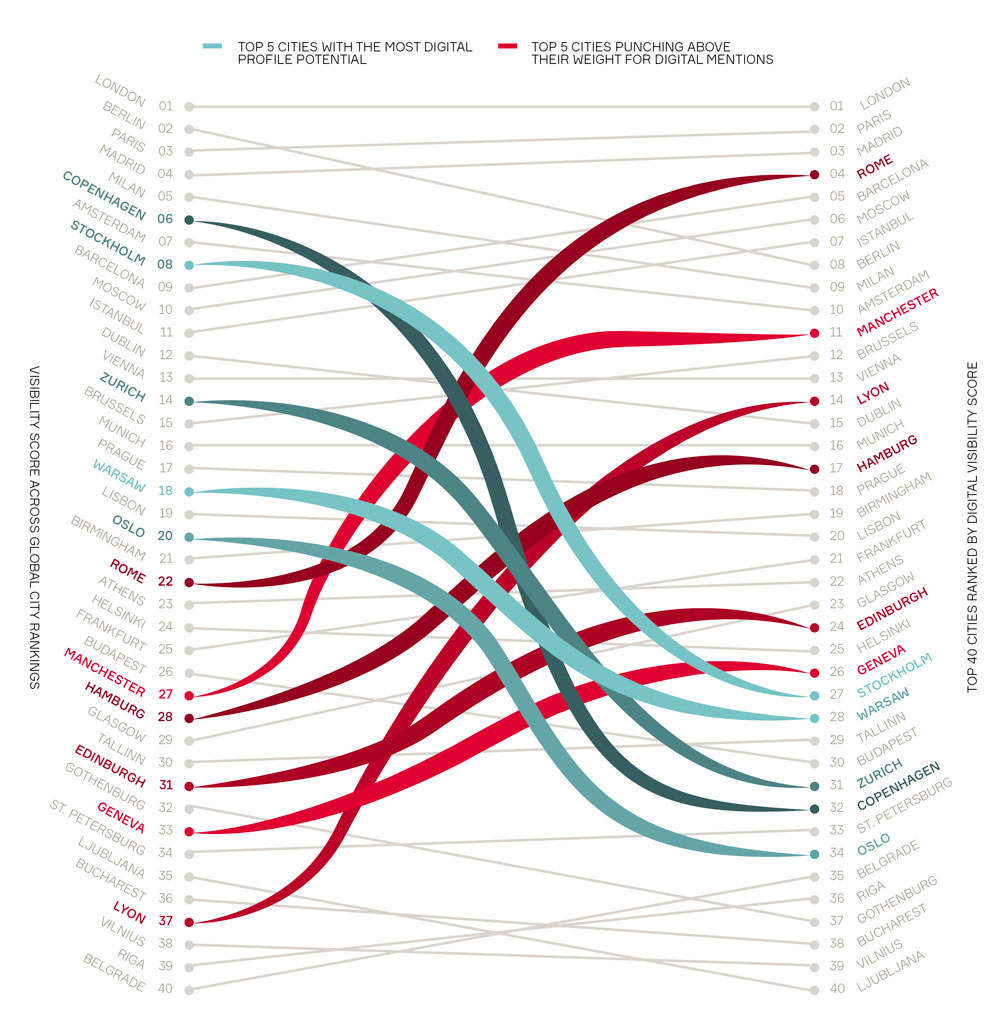 Top 5 cities punching above their weight for digital mentions

These cities generate significantly more mentions on digital media relative to their positions on city indices, presenting an opportunity to climb the rankings by consistently improving the quality and impact of the conversations about them. Their category shares show significant variance highlighting areas these cities can potentially consolidate a lead in.

– None of the Top 5 cities perform strongly for more traditional news coverage, except Rome, but benefit from huge amounts of user-generated content. Rome is the top performer overall for forum mentions and does particularly well with blogs too (third), however, the percentage of conversations about Rome taking place in English are of the lowest for any city.

– Lyon’s online visibility ranking is 23 places higher than its city ranking. This is driven by conversations around technology. Rome scores the highest shares for culture and liveability.

– Cities with higher business category shares tend to have higher talent shares too, as with Geneva and Manchester. In Geneva, this conversation is concentrated on Twitter and online news.

Top 5 cities with the most digital profile potential

Global city rankings highlight these as the cities we should pay attention to, but this doesn’t necessarily translate to the digital world, where these cities attract fewer mentions than their peers. Therefore, these cities have the most potential to grow their digital profiles.

– Despite being ranked lower than Oslo, Copenhagen and Zurich by city rankings, Stockholm is generally talked about more on digital media.

– Warsaw shows a strong pairing of culture and liveability (like Rome) with the highest share for both category shares for this group of cities. Copenhagen has a similar profile.

– Zurich’s business focus is apparent with the highest shares for business and talent (like Brussels, Dublin and London). However, it also has of the lowest digital conversation shares for culture and liveability.