The city of Genk is building a science park called “Thorpark” on the site of the former Waterschei coal mine mainly for research around the utilization of sustainable energy. Co-financers of this urban operation are the LRM (Limburgse Reconversie Maatschappij), the KULeuven and the province of Limburg. This very ambitious project will give new life to the old mining area and, with support from the Flemish government and the European Regional Development Fund (ERDF), various individual projects will be realized in direct cooperation with each of the investors and the city. 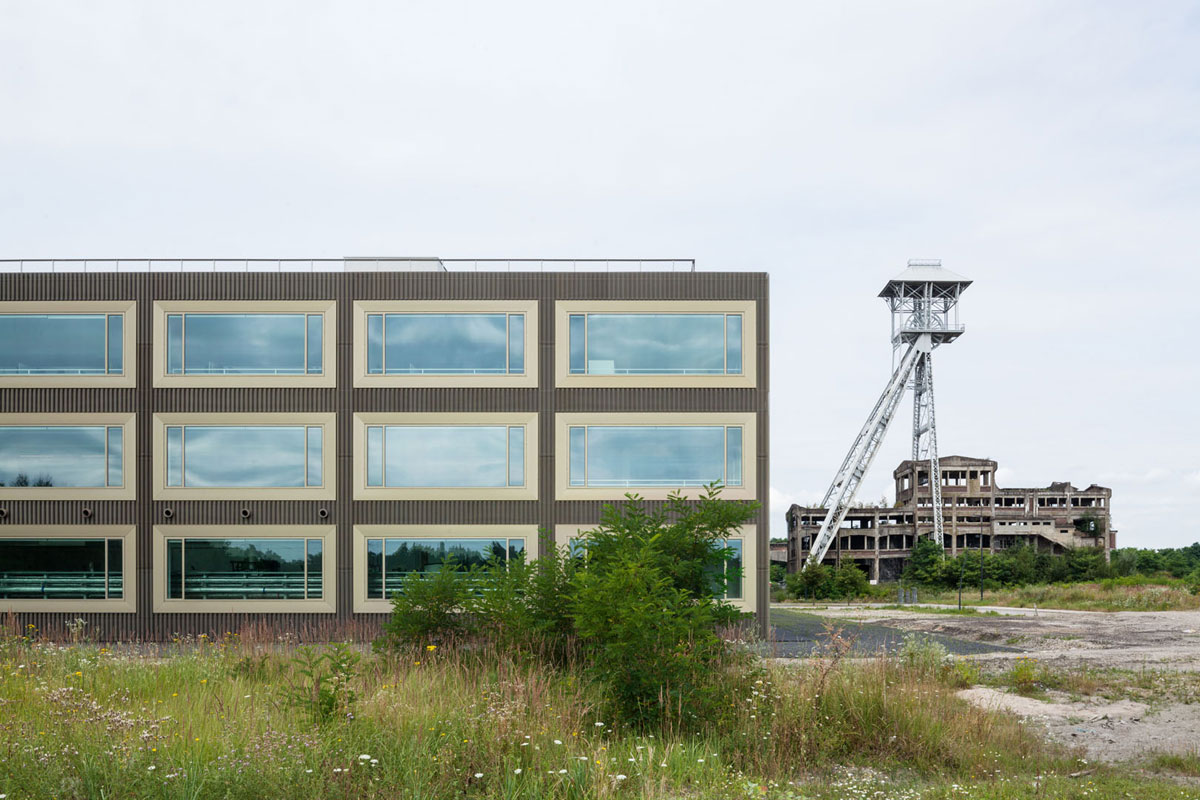 The old mine itself consists of a series of powerful industrial buildings, including an imposing shaft tower. Together, these buildings form a strong iconography and make the city a succinct and “inviting address.” To underscore this effect, the city of Genk had already laid out the streets and parks to create an optimistic impression of future activities. 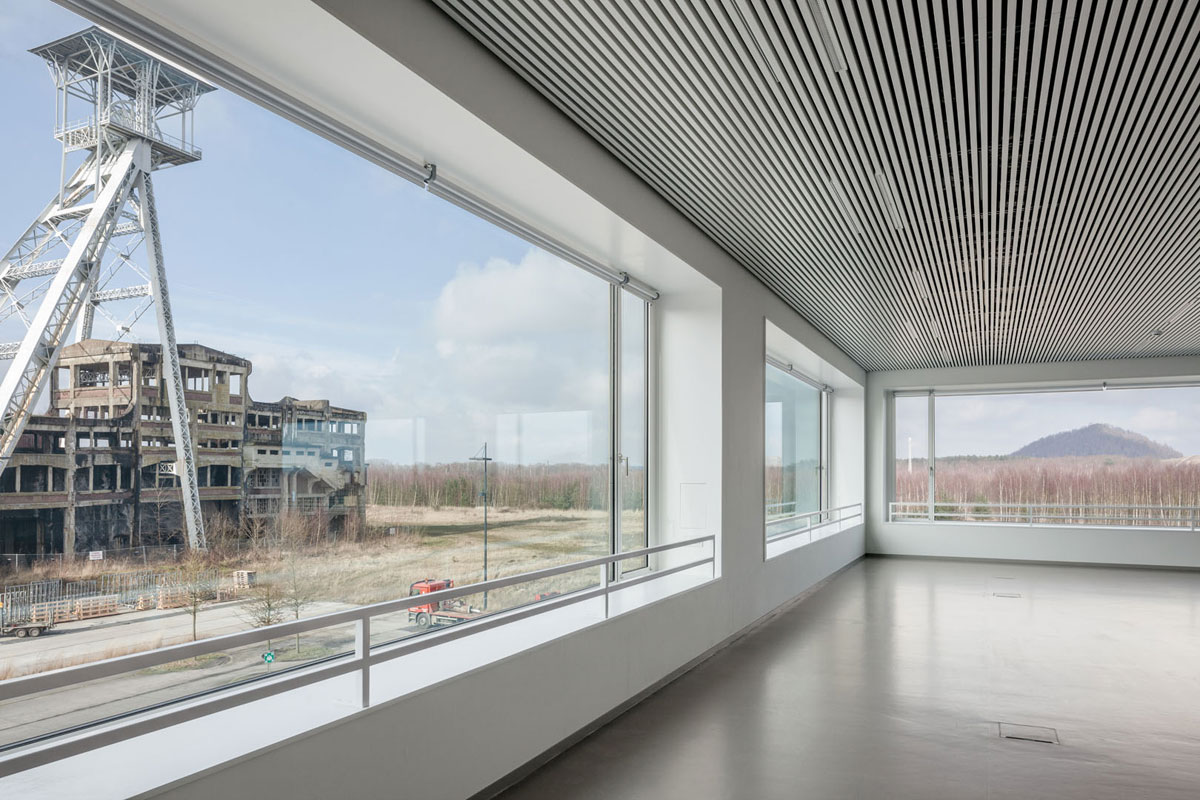 The HUB architecture office of Antwerp defined the urban framework by dividing the entire mining heap into square lots measuring 72.5 x 72.5 meters, so that the research buildings could be realized in clusters. Besides requiring the architects to deal with the historical context in their designs, the major ambition was a difficult one: turning an industrial zone into an attractive campus space. The lots, which could hold one or more buildings, are surrounded by public parkland. As is typical for business parks, each lot offers a great deal of space for informal structures and utilizations, such as, for example, places to experiment with various technologies. Nevertheless, at the same time, each lot should also formally circumscribe the public green spaces, creating structure and spatial quality for the entire complex that goes beyond that of typical business parks.

In 2010 Atelier Kempe Thill in collaboration with OSAR architects Antwerp won the invited competition for the second new building on this new campus. The building called “Energyville,” has at its main purpose to offer spaces for research on sustainable energy. The building has been delivered in spring 2016.

The actual purpose of the Energyville research complex is to develop innovative energy technologies, amongst others the so-called “smart grids”: intelligent energy networks that are supposed to make it possible to capture and store energy. There are a number of these special research centers being founded parallel to each other at various sites in Europe; one of the goals is to lay the foundation for a completely new energy network in Europe. Furthermore, spaces for various other types of research, development, and testing of sustainable technologies have been created—for long-life batteries, electric and hybrid cars, diverse heating systems, and so forth. For this reason, the Katholieke Universiteit Leuven and its research departments, along with renowned Flemish institutes such as imec and VITO, are participating in the project. The demands in terms of energy efficiency and sustainability were very high and finally the project will be certified with a BREEAM outstanding label and the ambition to be energy-neutral. The project is a prototypical project on sustainability and energy performance. 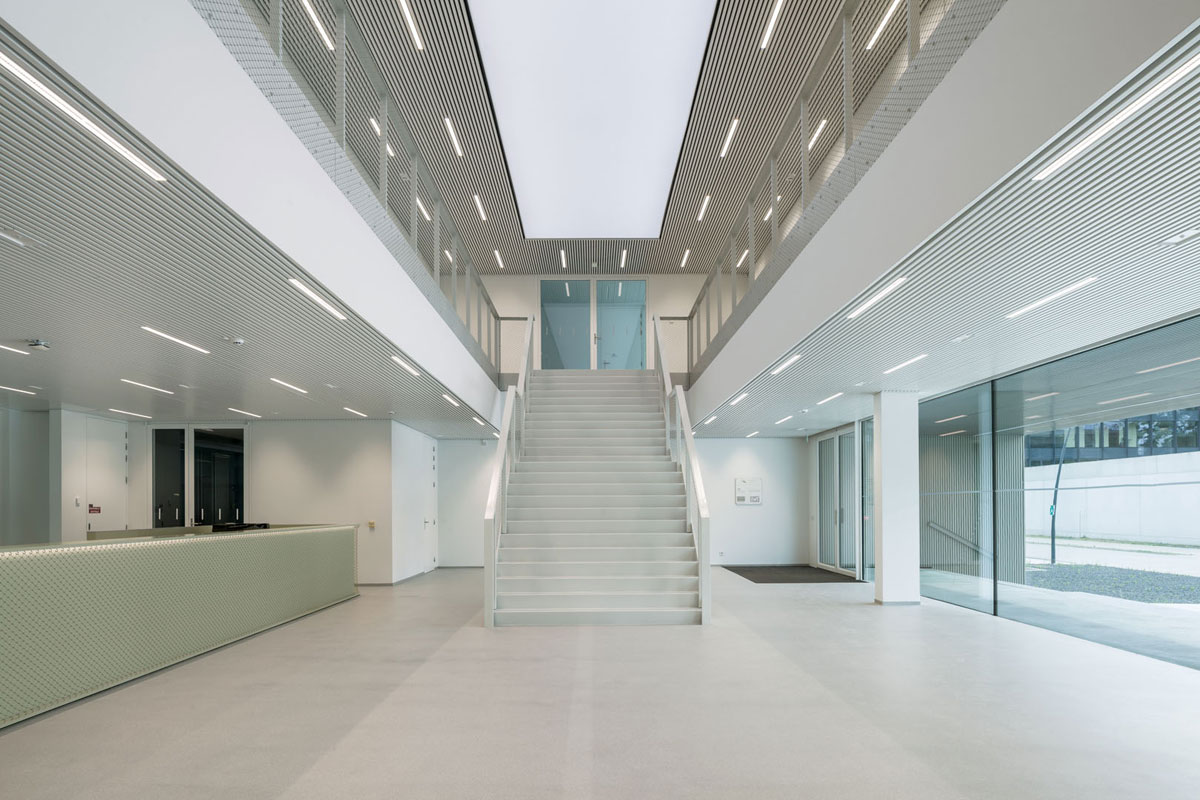 Besides the complicated situation, with Atelier Kempe Thill having to work with a client comprised of several organizations, the main challenge for the design team was to work with clients who actually, at first sight, do not need anything more than an informal industrial hall with a large outdoor area suitable for conducting all kinds of tests, where they can putter about to their heart’s content and nobody from the city authorities will bother them with urban planning regulations. In terms of urban planning, the campus is an attempt to work according to a necessary organizational principle, so that all of the neighbors will be able to function together, despite the density and compactness of the site. 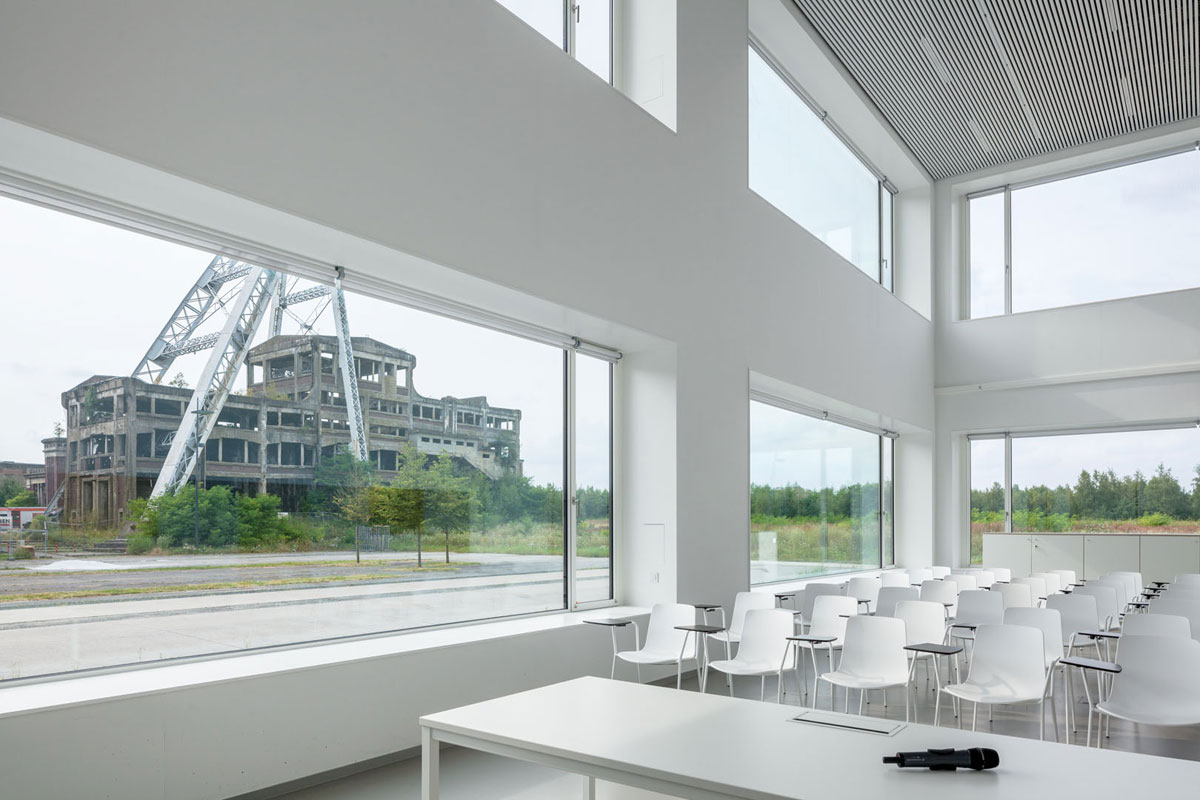 The clients, to whom actual sustainability is the most important theme, assumed first of all—surprisingly enough—that the offices and experimentation halls would be completely separate buildings. The main question for the entire concept was, then, how to convince the clients to unify them into one building instead of building several separate ones.

The main question for the interior was: what spatial concept would, on one the hand, create a strong architectural backbone and, on the other hand, facilitate the activities of the researchers at the same time? 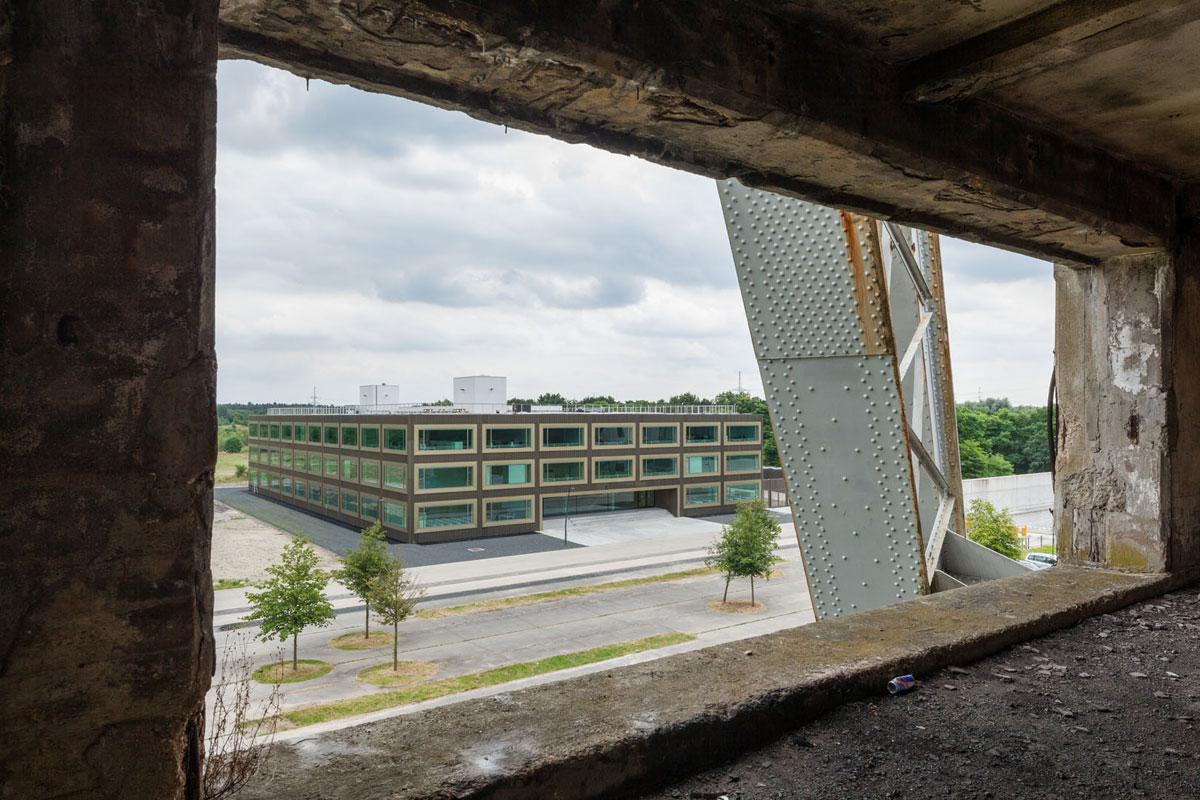 The convincing argument to make one main building bringing together the majority of all activities was the synergy effects of such an approach. Theoretical work and practical experiments would be very close to one another and could create fruitful interaction, which contributes to a better productivity. Also, achieving an environmentally friendly building unification into one compact structure is much better than separation in several volumes. Last but not least, only one very compact building was able to offer a relevant ratio between price and quality to make the most of the very tight budget.

Atelier Kempe Thill managed, in an intense process, to convince everyone to unite all interests and requirements into a single, integrated architectural concept, combining several sheds into one “industrial palace”. 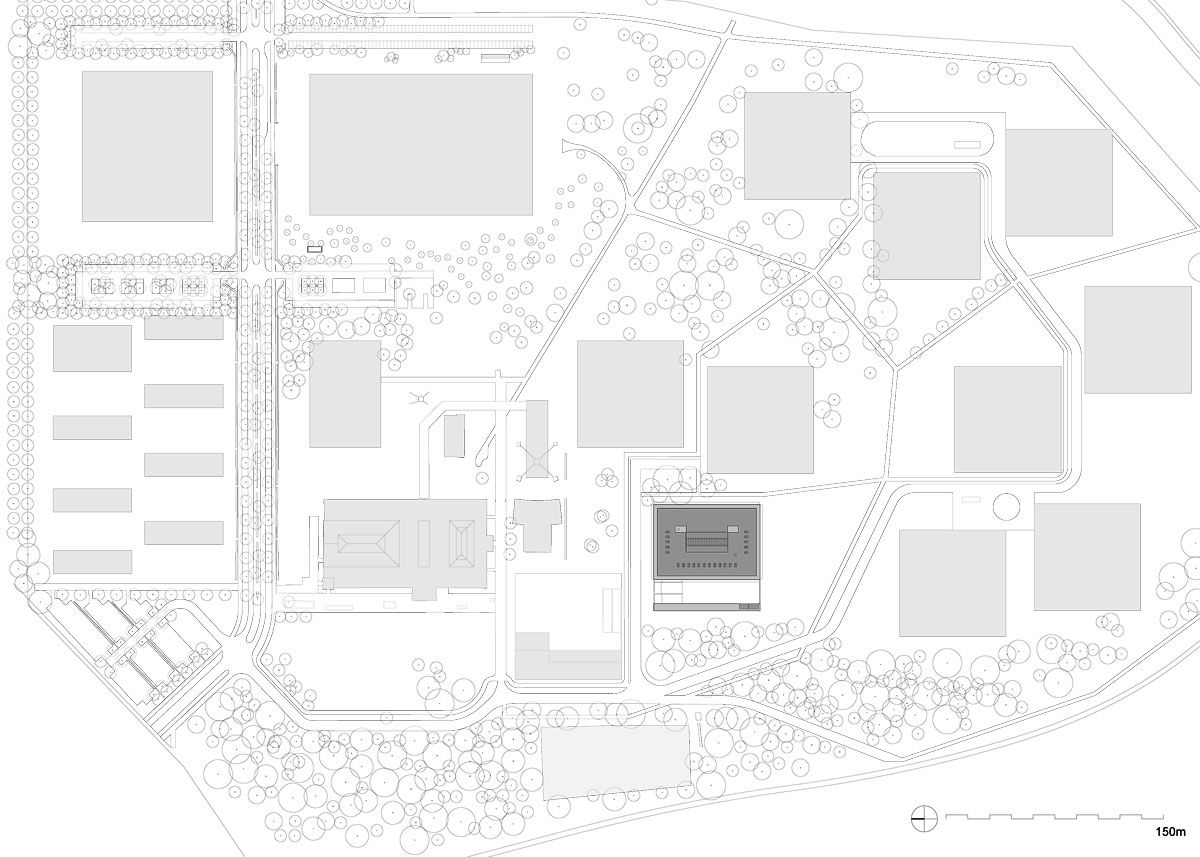 Here, the design begins with a compact, centrally organized type of building: 72.5m long and 50 m deep with a large space in the middle that substantially defines the identity of the building. This core of the building is the matrix space, a nine-meter-high experimentation hall for smart grids with a generous roof light that creates a near-daylight situation, like it was an outside courtyard.

This space is surrounded by a ring of all the other functions of the building in a 19 m deep zone. Directly behind the entrance visitors are welcomed at the entrance desk. Behind the desk a nearly 10 m wide and 3 m high window provides a view onto the activities in the matrix space. Linked to the main entrance on the west side there are the public and teaching facilities: lecture halls and seminar spaces. 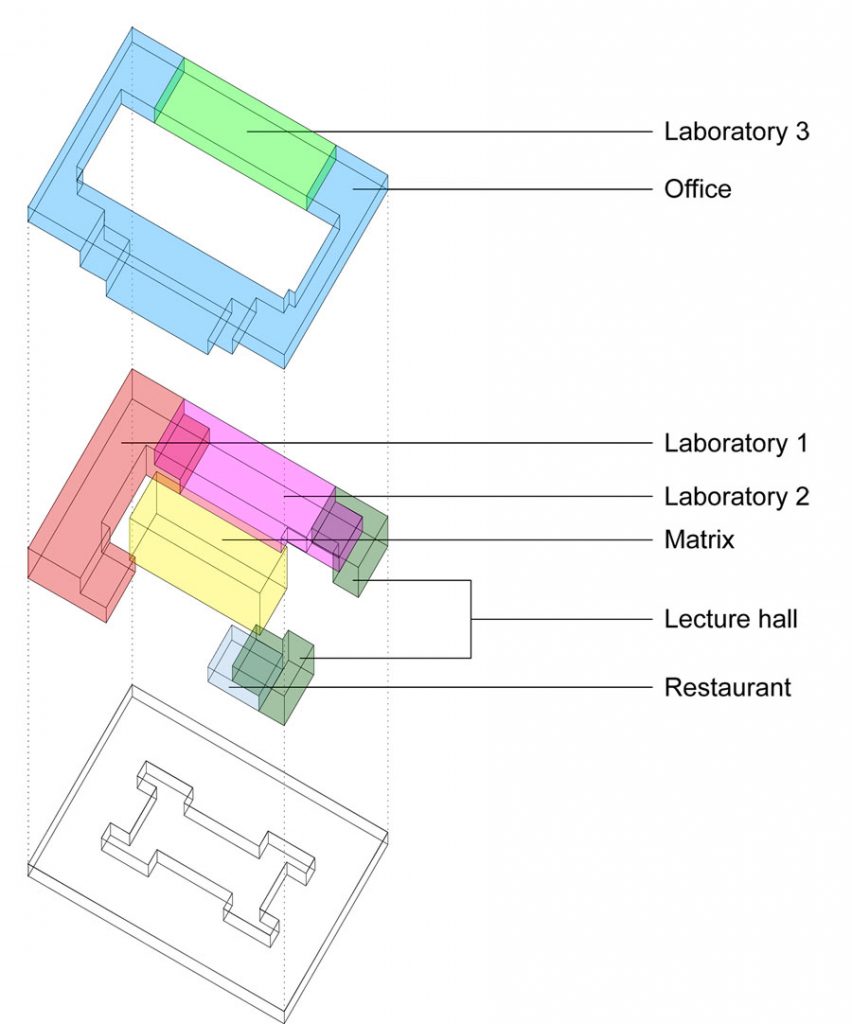 On the north side there are mono-oriented offices, conceived as open spaces of more than 14 m deep. On the south side there is a big workshop witih a double height space, opening with large folding doors towards the working court. On the east side of the building a double height test laboratory for all kinds of heating systems is located with chimneys directly out of the façade. The structural concept allows for all the double height spaces to be divided into single heights to create even more floor surface. In the basement there is a parking garage for approximately 100 cars.

A Building of Big Halls

The building that appears very simple and abstract on the outside unfolds an unexpected variety of spaces on the inside, as well as great transparency and views in contradiction to its extreme depth of 50m. Despite the pragmatic character of the entire operation, great care is taken in the quality of spaces.

The spatial concept takes as its point of departure the definition of the matrix space as the central space, giving a backbone and a clear hierarchy to the entire building. Furthermore, everything is set up so that a maximum of generosity in each sense can be created: large column-free spans of 7.2 m x 14 m, as much as possible generous views towards the fascinating landscape outside and inside between the spaces. Therefore, the inner organization is set up in a way that views are offered by generous, largely frameless glass panes through the entire depth of 50 meters. Communication of the users is facilitated and the building can also be perceived as an entirety on the inside. The gross height of all floors is fixed at 4 m as a standard, which assures a generous net height and allows for all kinds of activities in the future. 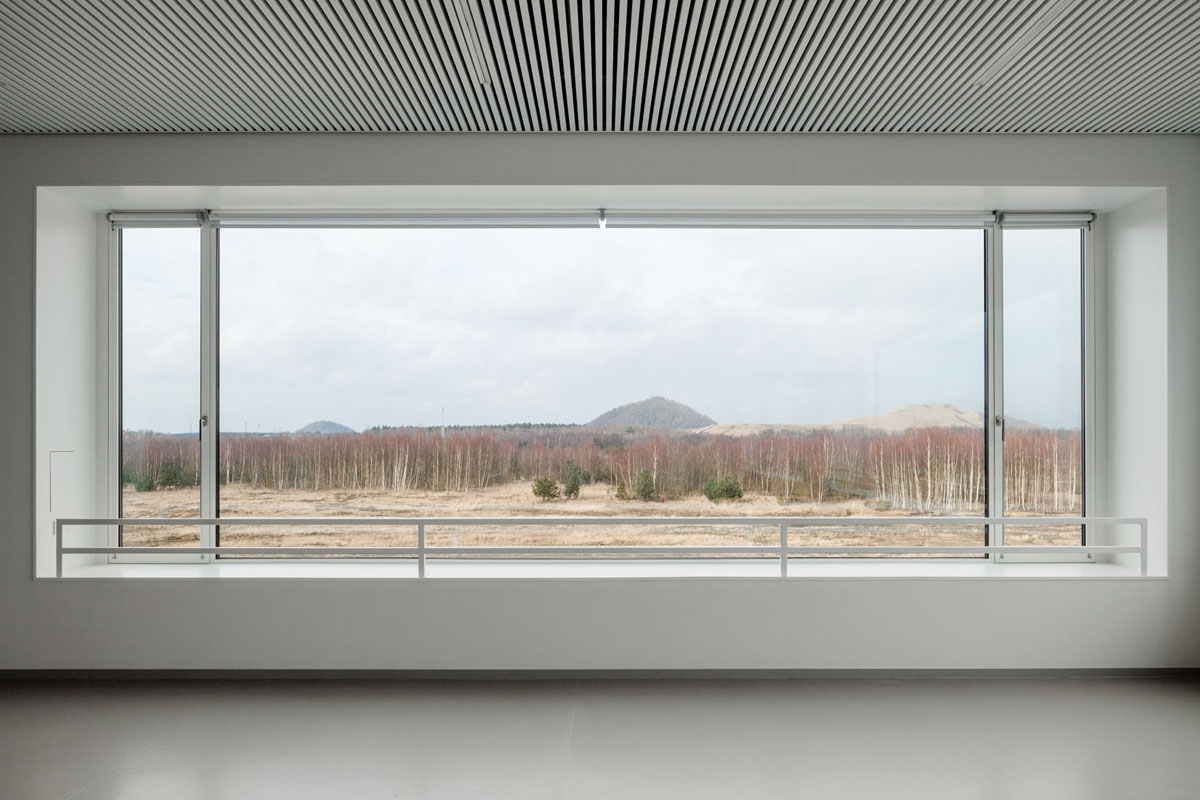 The majority of all spaces are bigger spaces: halls, auditoria or landscape offices of various kinds, like in ancient palaces. Some of them are one storey high; others have a double height. Each space is set up as well as possible with the goal of creating harmonious proportions. At the same, time the link between them aims to be well composed in proportions, materials and colors.

The entire interior is created through wall architecture without columns, except for a few such as in the corners. The façade follows the same logic as a load-bearing concrete wall with big holes in it, instead of a curtain wall solution. With this set-up, the façade has a particular relationship towards the interior: each window frames the landscape around it. Elements of the landscape, such as the artificial mine heaps or the old mine buildings, are shown like paintings on a wall, framed by the big windows. The loadbearing façade also made it possible to create a column-free entrance, carved out of the built mass over the width of three axes.

The materialization of the interior is chosen as open and bright as possible to give the building a light atmosphere, but also to get the best possible BREEAM certification, which includes light qualities as one of the major issues. 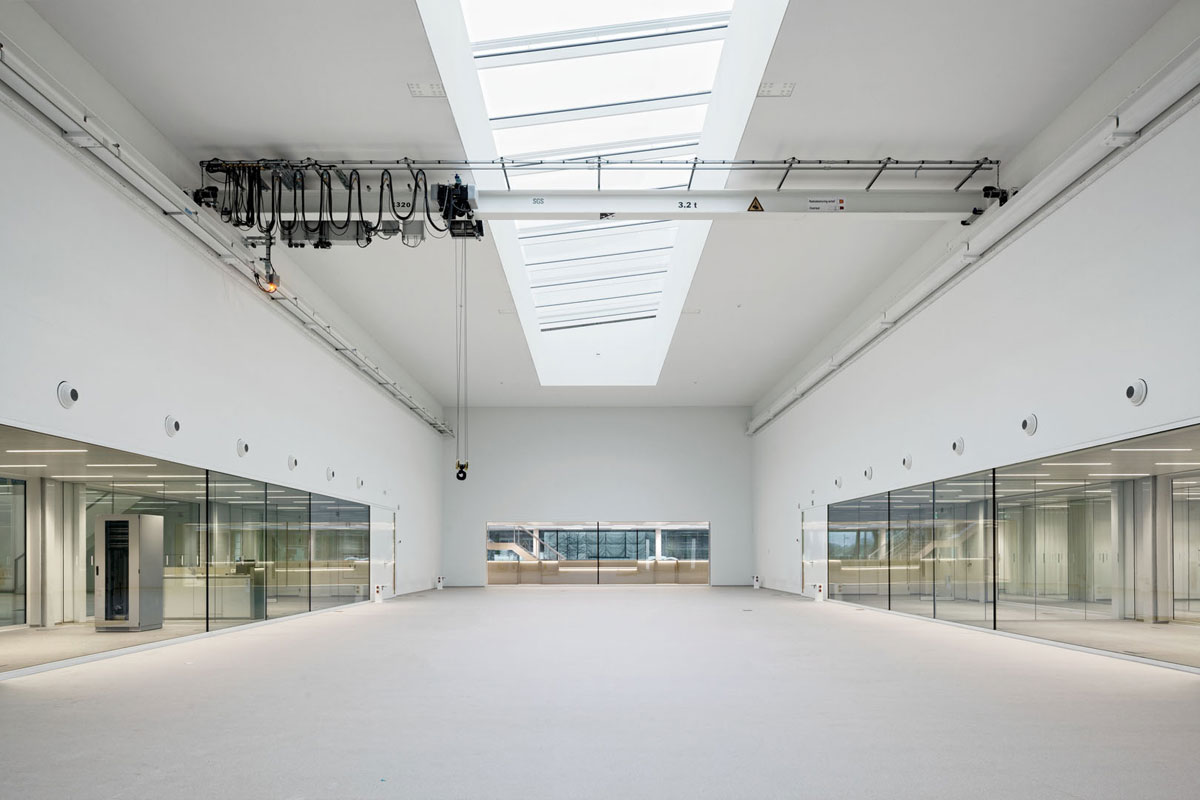 For the outside, the question was what would be the most relevant expression, on the one hand of the programmatic nature of the building and, on the other hand, in relation to the setting of the building in the context of the science park and towards the prairie-like landscape in which it is embedded.

The final choice was to set up the building in a 7.2 m façade grid. The neutral grid offers the flexibility the clients needed, also for potential future partitions. At the same time, with its large dimensions, the grid assures a carefully balanced degree of monumentality. This monumentality assures that over the length of 72.5 m the amount of windows is still countable at first sight, which makes the building understandable and ascertainable. 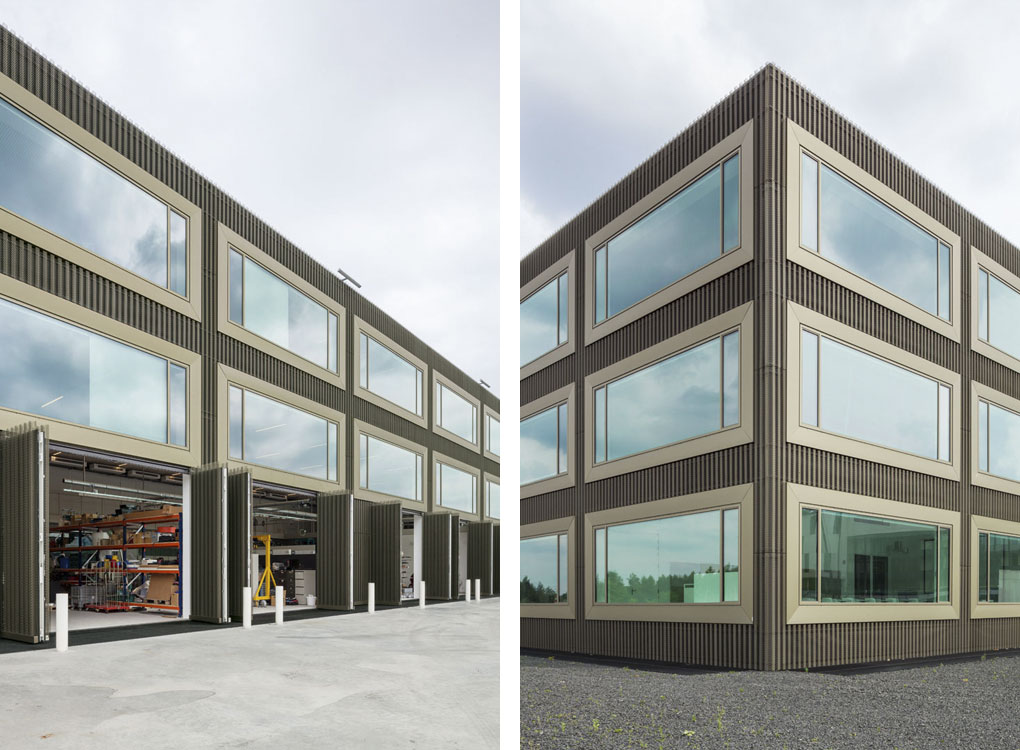 The façade reflects at the same time on the dry and harsh character of the artificial mine landscape that is nearly without scale with its scarcely planted mine heaps with prairie grass and wild growing birch trees. A single building here is, per definition, isolated; it appears nearly lonely and has difficulties finding anchor. The stoic rhythm of the new façade, without any variation except for the entrance, also plays with exactly this circumstance.

On one hand, the façade has a tectonic character; on the other hand the consequent grid, even on the ground floor, makes the building look like it is nearly floating in the grass field. The size of the windows – more than 6 m long – establishes a coherent relationship with the size of the interior spaces and the desired neutral character of the spaces required by the program.

The façade is detailed in a flush way to give the orthodox window rhythm a certain tension and lightness due to the emphasis of the glass panes of the windows. To make the windows look bigger than they really are, to achieve a convincing relationship between windows and closed parts of the façade, all windows have embrasures such as in ancient buildings. These embrasures are made out of extruded and bronze anodized aluminum and the actual window frames as well.

The zones between the embrasures are finished with extended metal sheets, also made of bronze anodized aluminum. This gives these closed parts a light and nearly ephemeral character. This effect ,together with the embrasures makes, the windows appear as if they were the visually solid part of the façade, stabilizing the entire building.

The finish of the closed parts, in a huge grill all over the façade, also makes it also possible to integrate all kinds of ventilation grills that are controlled at the end of the building process. The same material is also used to cover the speed gates and other entrance doors outside and in the courtyard.