This essay is an excerpt of Operative Mapping by Roger Paez, published by Actar Publishers and Elisava.

The concept of Dynamis deals with how maps address time. Reality is constantly changing. Moreover, our perception of reality is also changeable. The history of mapping is also the history of changes in how we understand reality. Maps have always had to deal with the changing nature of reality. However, in modernity – and especially following the information revolution – there has been an exponential increase in the dynamic character of the world and our perception of it. This dynamism has only continued to accelerate, forcing mapping to address the issue of change explicitly. The confluence of this highly dynamic reality and an expansion of the map’s fields of application (far exceeding the previous disciplinary boundaries) has led to a high point in the incorporation of the temporal dimension in mapping. This has generated one of the most active and innovative fronts in mapping research and practice, especially when the interest in recognizing the changing nature of reality is coupled with the data capture and management capabilities (calculation, modeling and simulation; conceptualization, representation and visualization) provided by new digital technologies. Aside from new dynamic map formats – which develop over time, like animations or interactive interfaces – two-dimensional maps have seen very significant advances in terms of incorporating time-based characteristics into static and flat formats like paper or screens. The complexity and dynamism of phenomena are irreducible to the static two-dimensionality of conventional maps, but the same is true for the most sophisticated interactive formats imaginable. Projection, in the sense of a necessary reduction in the complexity of the map’s object, is not only inevitable, it is consubstantial with mapping itself.

Although at first it might seem like mapping tends to capture a particular moment, very often it is able to incorporate time-related parameters with great richness and precision. Time appears in the map through three aspects associated with the idea of change: first, movement – a change in place or position of a body or a phenomenon; second, transformation – a change from one state of reality to another; and, third, action – the manifestation of a force that causes a change in reality or in our perception of it.

Movement refers to the change in location or position of a body or a phenomenon, and it is the most direct way to address time in mapping. There can be movements on many scales and at many speeds, which imply fast rhythms (the flow of traffic) or slow ones (urban morphology). Using mapping operations both on the level of formats (layers, animation) and graphic coding (line values, notations), maps are capable of displaying movement and, therefore, allow for working in dynamic terms. 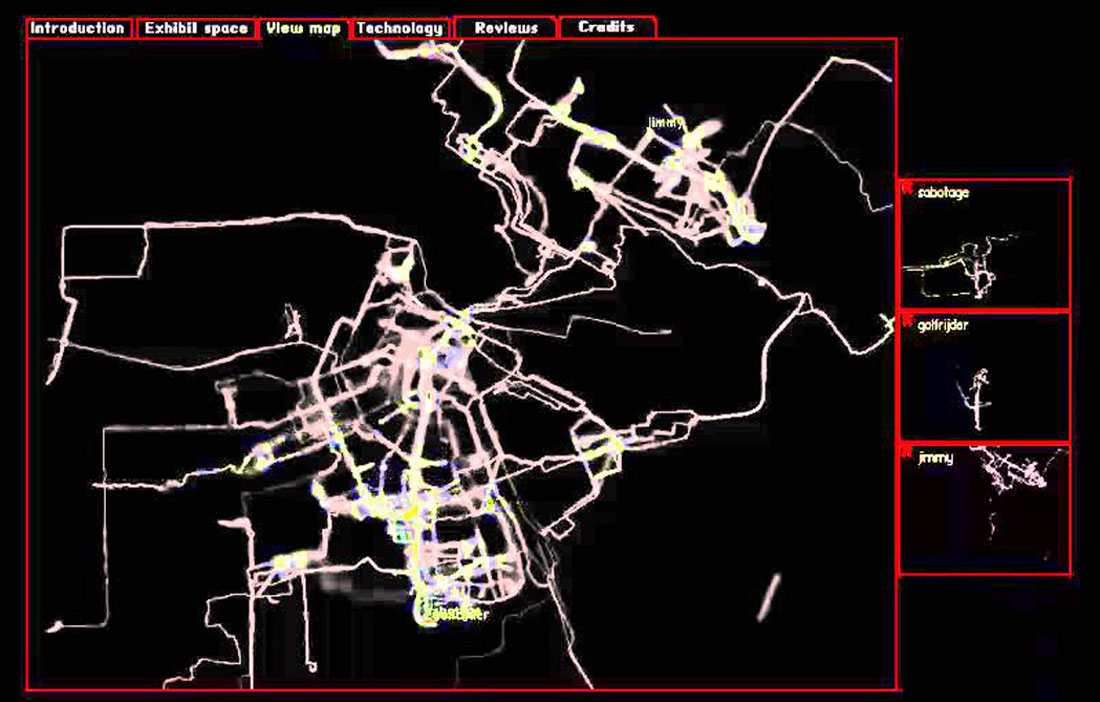 Amsterdam Real Time by Esther Polak proposes displaying the mental maps all residents have of the city where they live. It is a GPS installation undertaken for the exhibition Maps of Amsterdam 1866-2000 at the city’s Municipal Archive. Over a period of two months in 2002, residents of Amsterdam were invited to go about their daily lives while carrying a GPS geolocation tracker with them at all times. The location data for each participant was sent via GPRS to a central unit that transformed the coordinates in real time into paths of light against a black background. The graphic coding was based on a point of light at each individual’s position, plus a line generated by a progressive decrease in the intensity of the point over time. As such, at any given moment, you could see, in real time, the positions of all the participants (and the paths they had taken just before), plus the partial map produced by overlapping the different paths and positions. Polak’s map records only the real movements of specific people, and the accumulation of the paths of all the participants during the two-month duration of the exercise generates an image of a mental map of Amsterdam that reveals the most oft-travelled areas, the unoccupied spaces, the points of urban articulation and the vectors of movement – ultimately, psychogeographic traces that generate a technological version of a Situationist map. 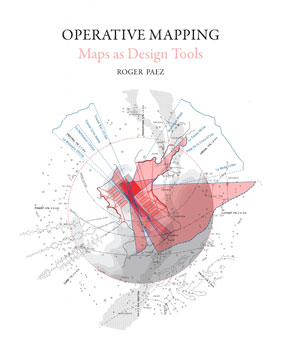 [1] For a discussion of Barrett Lyon’s work in particular, cyberspace mapping in general and the relationship between the digital world and the social world, see Weelden 2006. [2] For more information on the Opte project, see Lyon n.d. and Lima n.d. [3] See Center for Spatial Research n.d.