The Dome’s fascinating and soap bubble like look makes it a real eye-catcher, drawing both tourists and Danes from its location in the Copenhagen harbor, squeezed in between the world-renowned restaurant Noma and Danish architect Nicolai Eigtved’s old warehouse. Its spectacular shape brings out the contrast with the rest of the rectangular urban landscape and its delicate skeleton and glass-like façade almost makes it soar. Those who enter inside are embraced with the warmth of a calm summer day, the smell from countless rosemary bushes, busy bumblebees and a 100-year-old olive tree snuggling, sheltered from the spring-fresh wind outside. 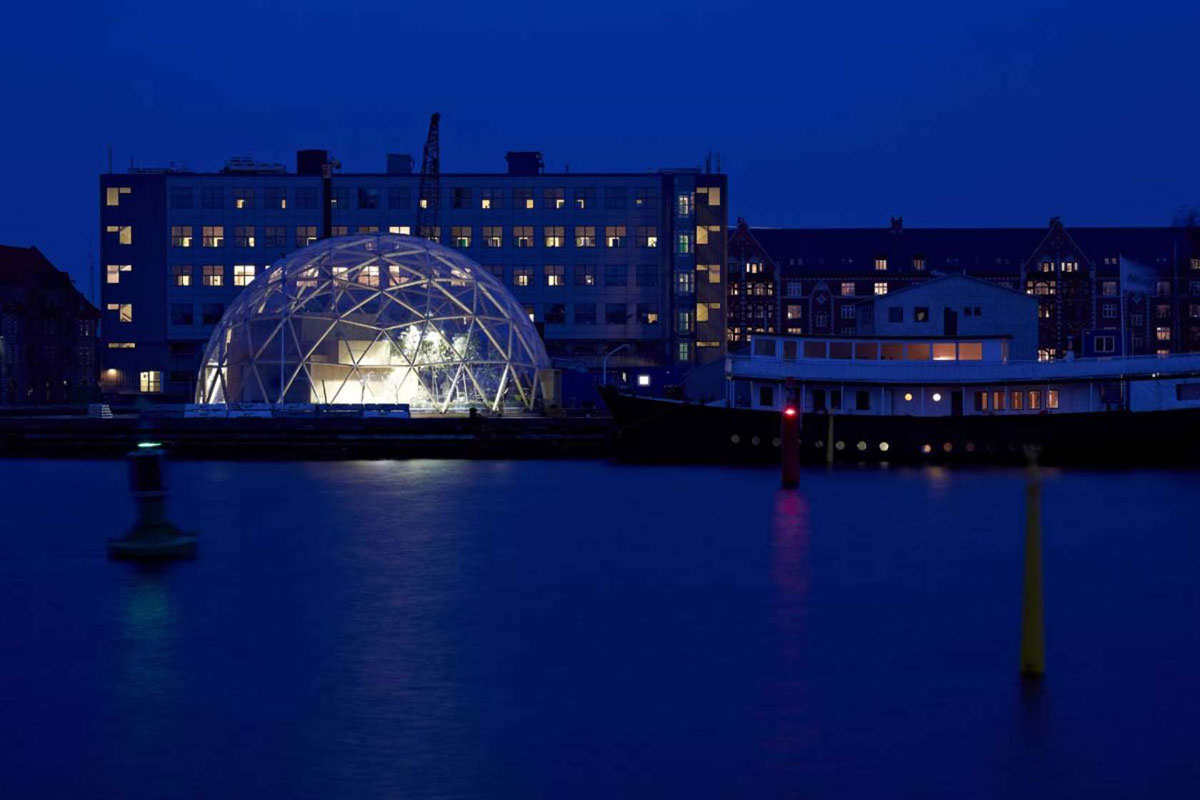 The dome at Krøyers square, named the Dome of Visions, was designed by the Danish architects Kristoffer Tejlgaard and Benny Jepsen and constructed by NCC. 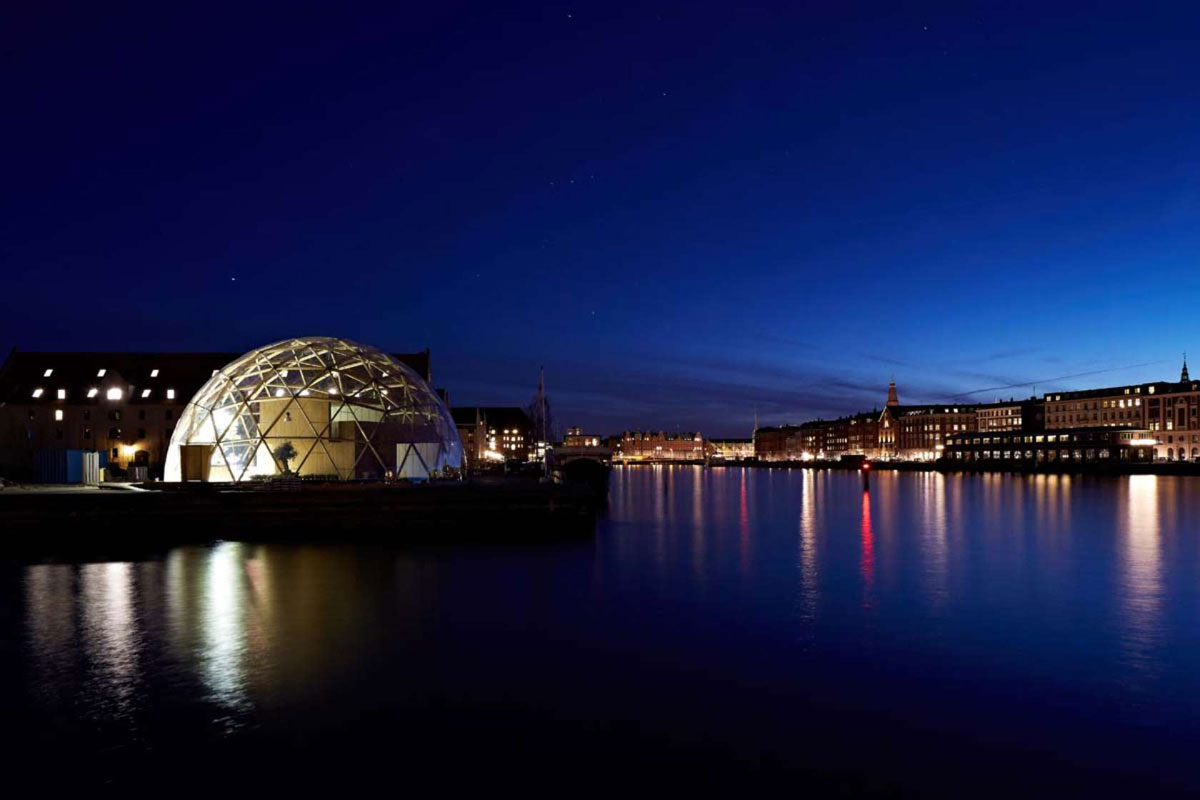 The Dome of Visions is a new temporary space in Copenhagen. The Dome will encourage and create life in one of the city’s prominent open spaces, which is temporarily put aside behind construction cranes and freight containers. The Dome will challenge the established construction sector with a new perspective on the ongoing debate on the future of housing, by being in itself a building with roots in alternative ideas and methods. It will therefore be both a creative breathing space and a serious platform for professional long-term visions.

The Dome of Visions invites European artists of inside, and it has already accommodated German Eurotrash pop, an audio-accompanied and live-transmitted trip through space, modern dance performances, and classical music, as well as other artistic and cultural experiences. 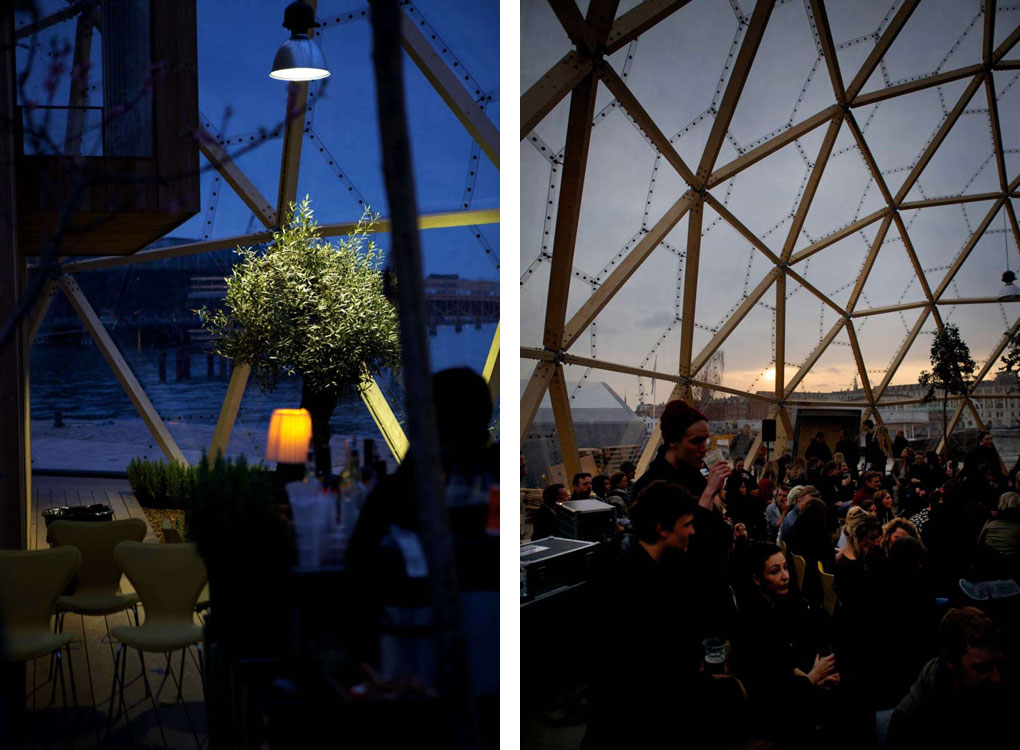 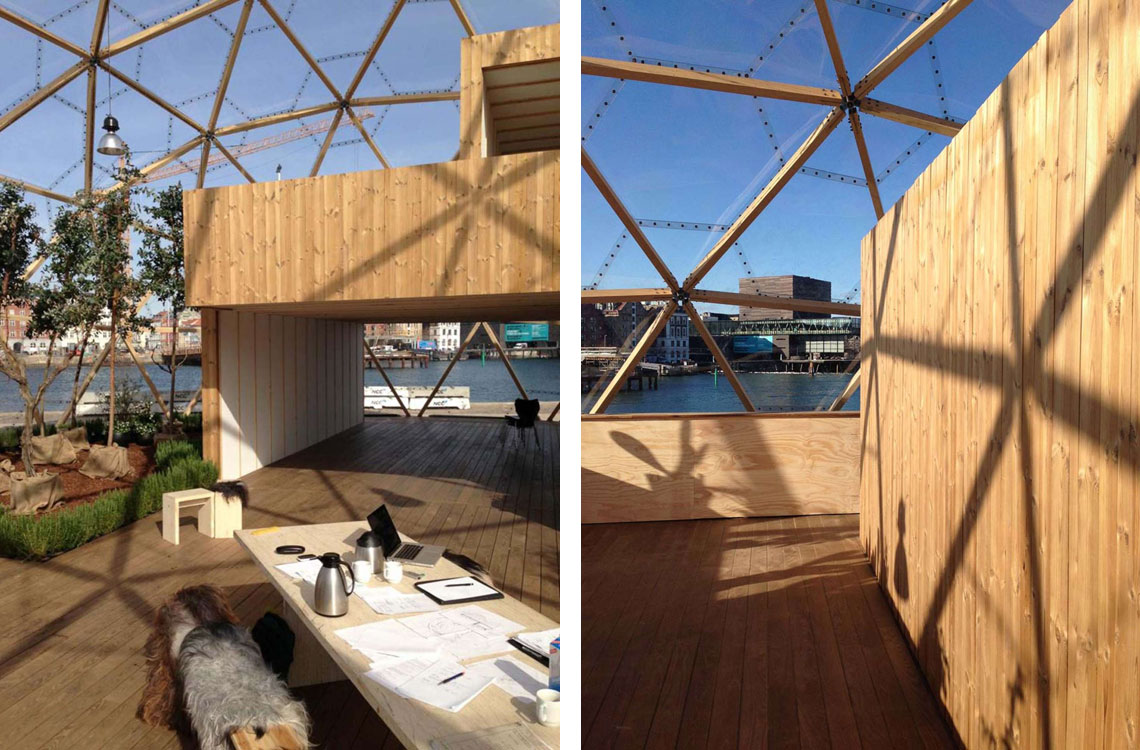 Carrying with them the intellectual legacy of the American architect Buckminster Fuller and his ideas about ecological design, and having practical experience from the artist collective Bureau Detours, the architects Kristoffer Tejlgaard and Benny Jepsen see great opportunities in working with geodesy.

The Dome of Visions is a construction of the geodesic type: a method of engineering with which one can create strong and sturdy but still delicate designs by delicately orchestrating the compressive and tensile forces of materials. The architects have several geodesic domes in their portfolio: a deconstructed version put up for the People’s Meeting on the small island of Bornholm, Denmark in 2011 and a plywood version put up at the Danish music festival Roskilde Festival in 2012. 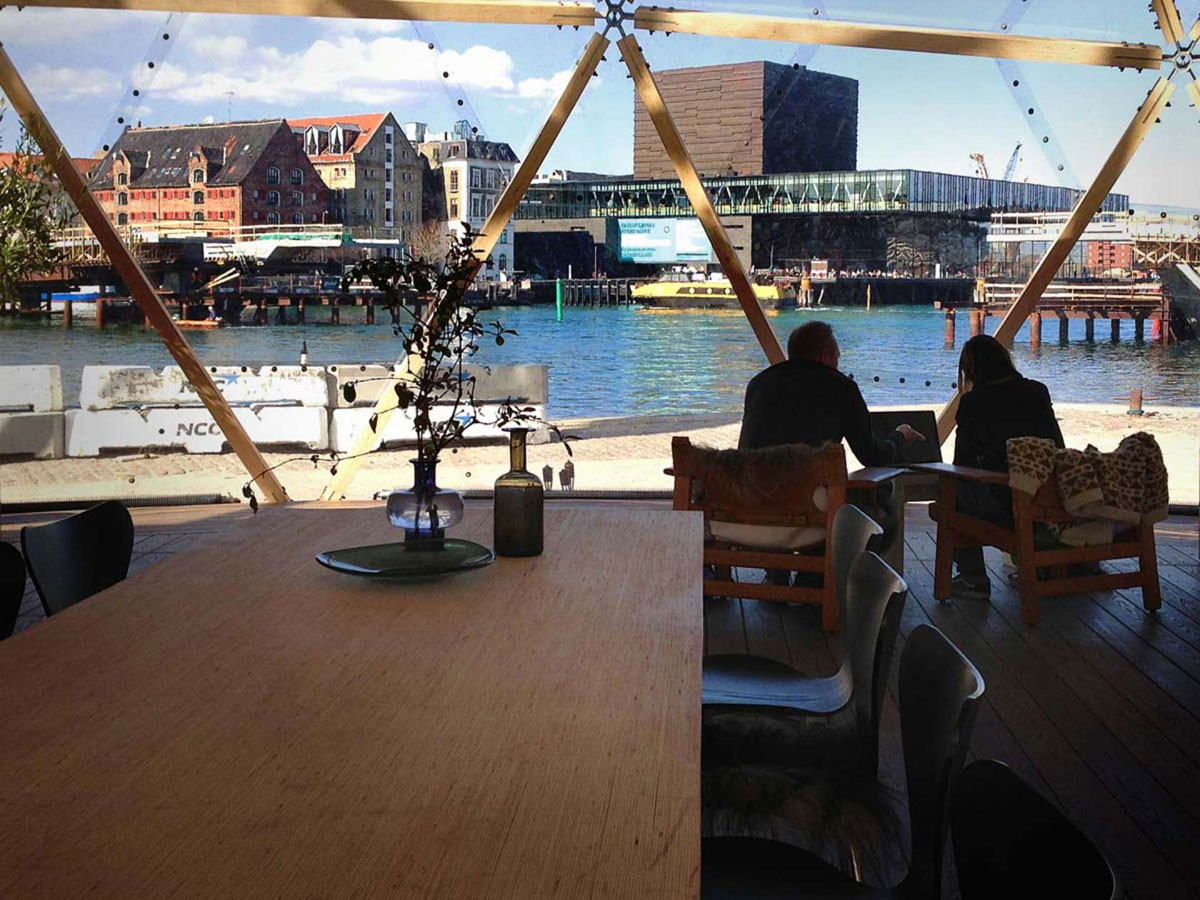 Collaborating with a major Danish entrepreneur like NCC creates great advantages. The collaboration made possible the optimizing of the materials and methods used when the geodesic dome was constructed. It also made possible the monitoring of the climatic conditions inside the greenhouse on a continuous basis. 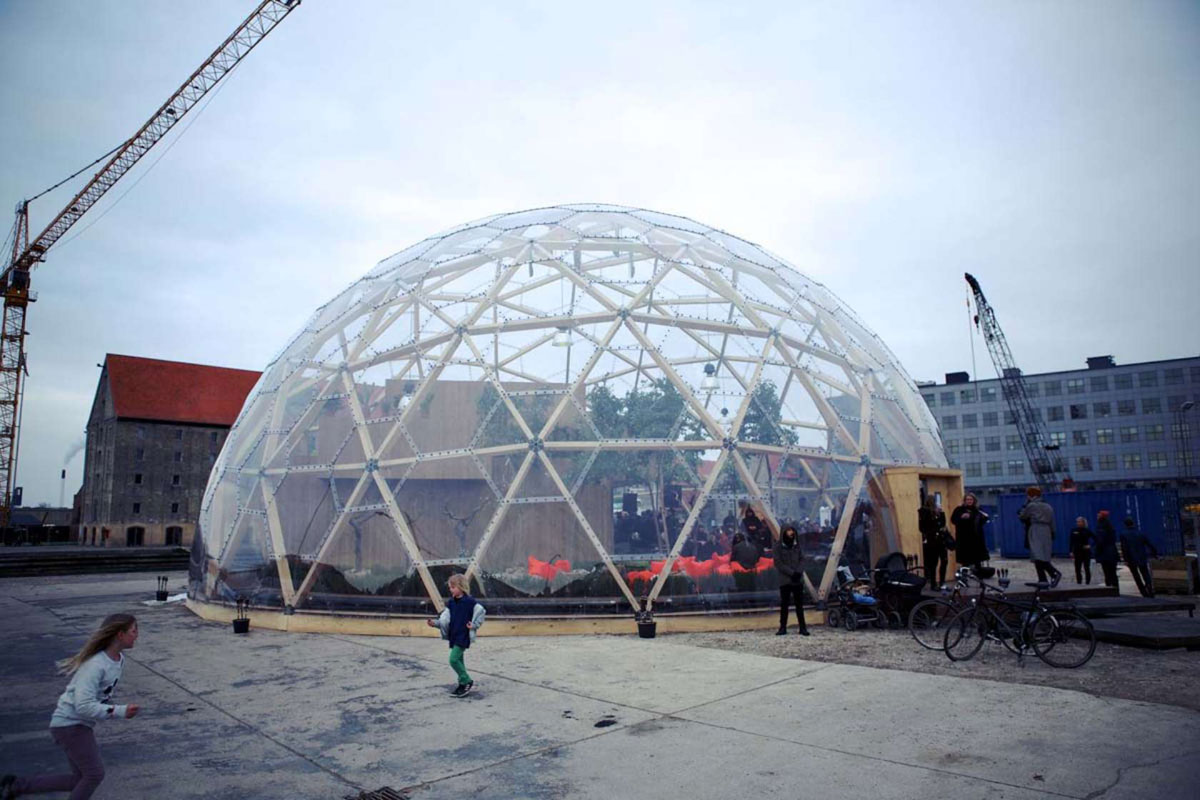 The Dome of Visions is an ongoing project, under continual development. The garden will be expanded to include a raised bed for vegetables and herbs and an irrigation system. A solar blind will also be established. The properties of the greenhouse and the dome as a dwelling, as well as the climate envelope itself, will also be tested by monitoring and logging the energy usage and indoor climate. The structure is mobile and will be moved to several different locations in Denmark throughout the next year or two. By the end of May, the dome will depart from Copenhagen for Aarhus. In Aarhus it will be put up in the harbor, close to the city center and will provide the setting for cultural events and professional meetings during the entire summer of 2013. In the late summer or early fall, the Dome of Visions will return to one borough in Copenhagen, which is going through a lively cultural resurgence in recent years. 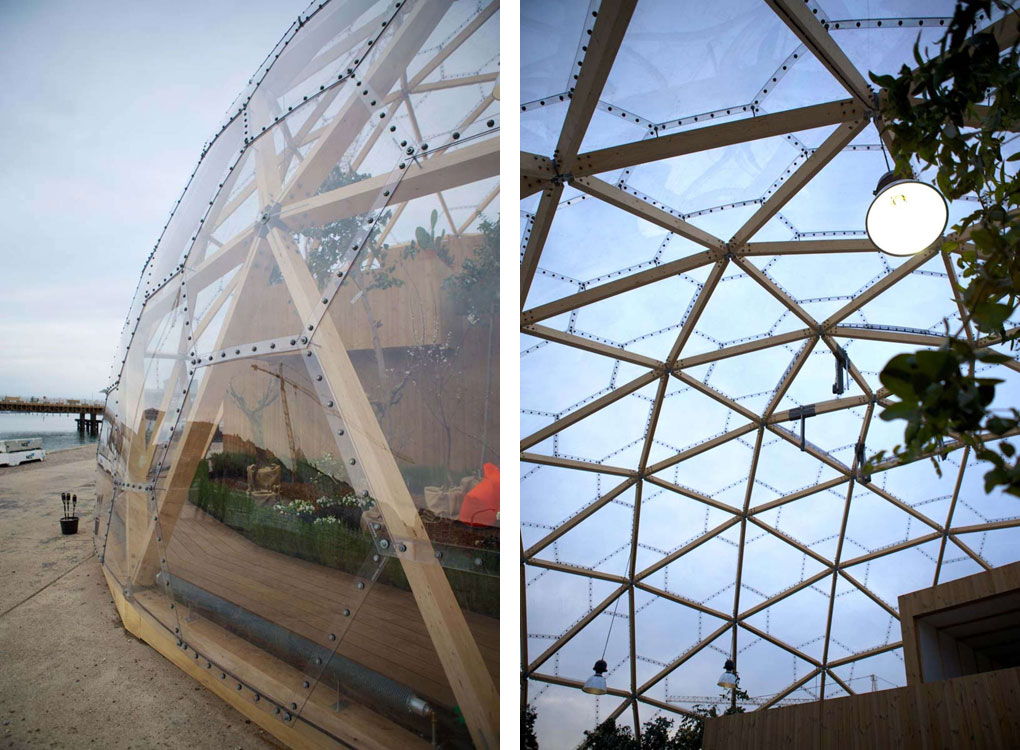 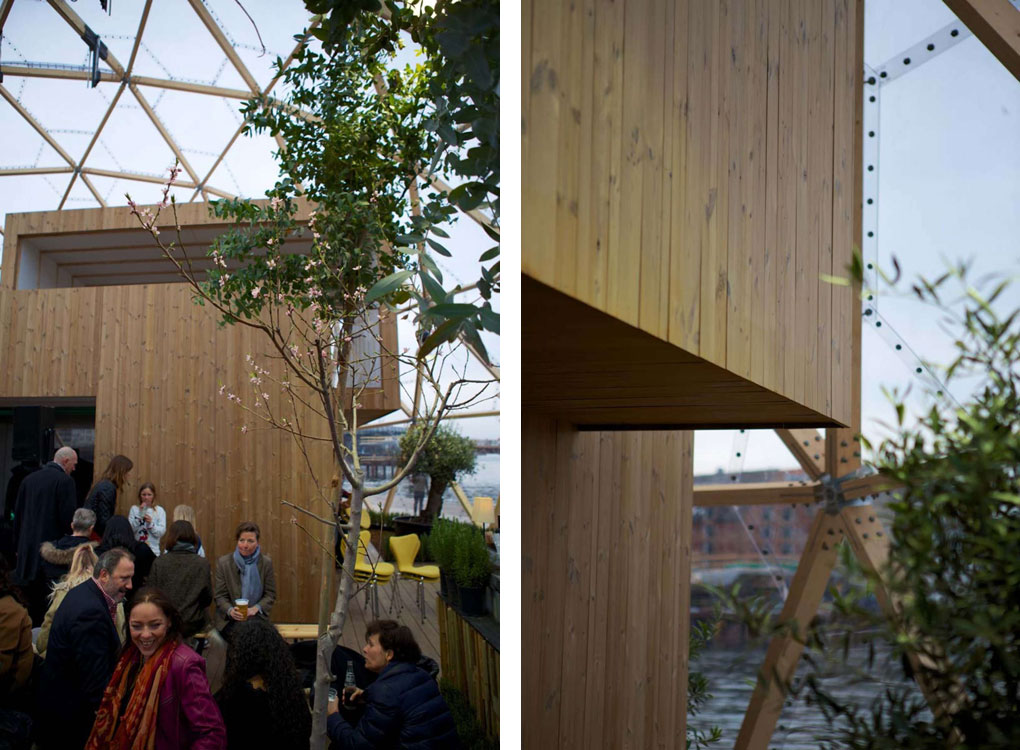 Several elements of the Dome of Visions deserve special recognition. The façade was developed by the architects Kristoffer Tejlgaard and Benny Jepsen specifically for this project. It is made from CNC-cut polycarbonate sheets, dimensioned after standard polycarbonate sheets to minimize material wastage. The sheets overlap in the same way as fish scales overlap, which makes the dome rain resistant and windproof, without the use of any type of commercial sealant. The façade is self-sustaining, has a higher insulating value than glass and will, when it is worn out, be taken back by the producer, reprocessed and reused in new products. The garden inside consists of eucalyptus trees, a 100-year-old olive tree, 50-year-old grapevines, peach trees, apple trees, herbs and flowers. Inside the greenhouse dome is a two-storey wooden house, with a studio on the first floor and a conference room, terrace and garden on the ground floor. The greenhouse has two sources of heating: one specially designed mobile stove made from bricks, clay, horse dung and linseed oil with a horizontal chimney that functions as a piece of furniture, as well as a unique liquid-gas based air-to-water heat pump of Swedish design. 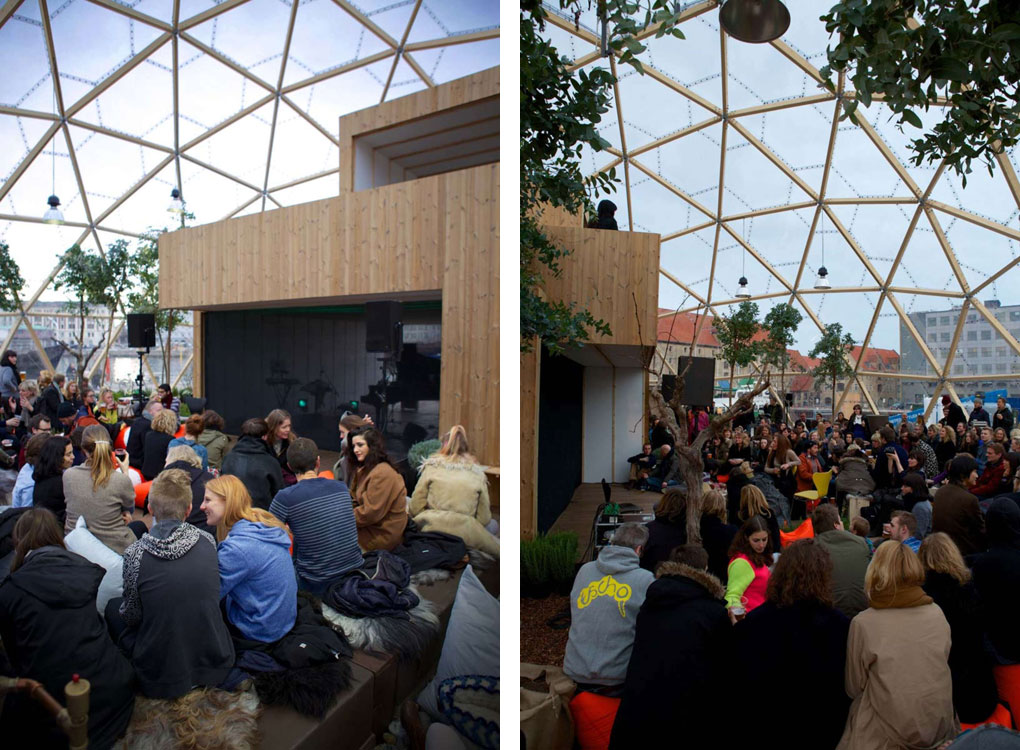 « Smart Citizen
Inside the Space »