DSDHA has worked in collaboration with Derwent London to deliver a discreet yet alluring brick corner building in Fitzrovia, central London, that brings delight to its surroundings while engaging in an active dialogue with the wider context of the city. 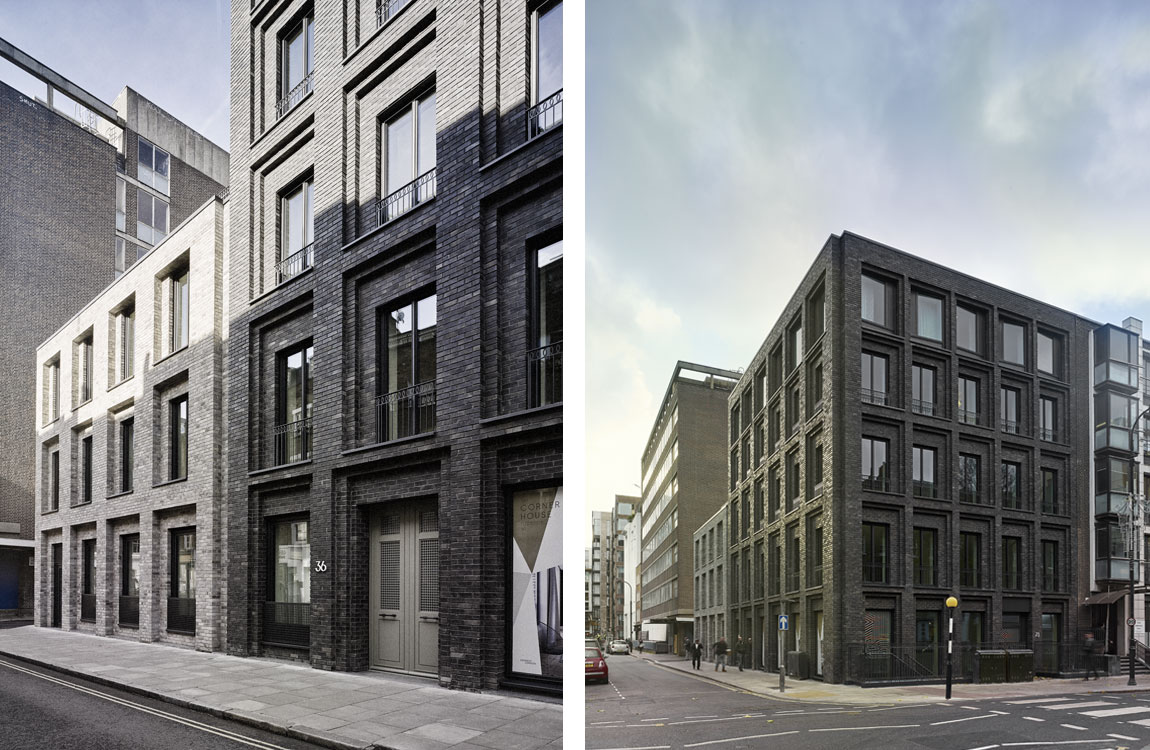 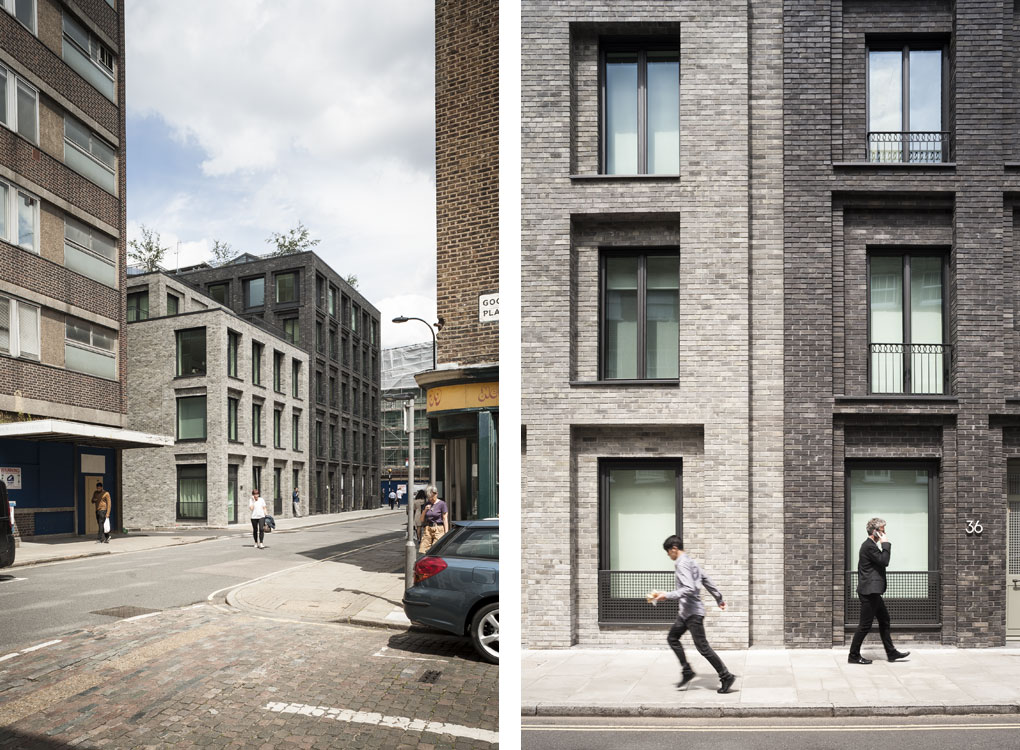 Corner House strives to introduce a new type of contemporary beauty, one which is less ostentatious yet captivating, building on the qualities of its location to provide a highly sustainable solution that embodies high-quality design and craftsmanship.

While at an urban level it celebrates the ordinary street corner, Corner House inverts this typology (typically presenting a more articulated treatment of the façade at the ground level) and places two jewel-like crystalline pavilions on the rooftop, opening up a series of unexpected views onto London’s variegated and ever-changing roofscape. 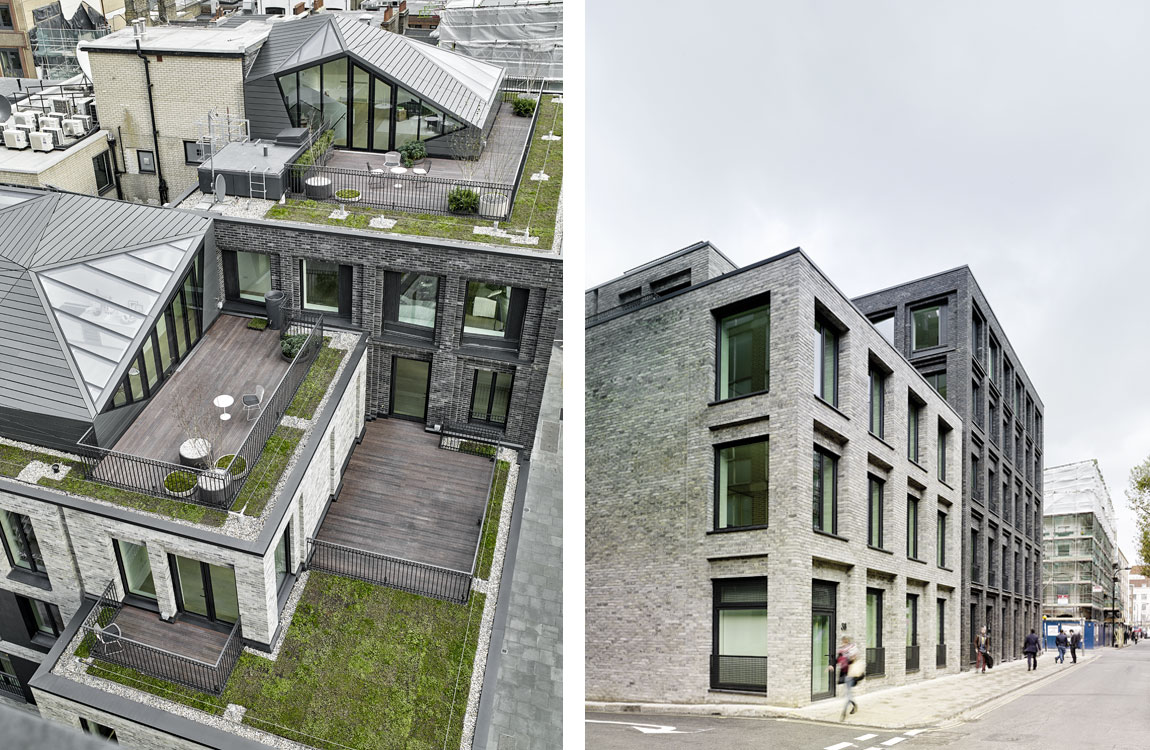 Corner House provides a mix of private and affordable homes, along with a commercial space on the ground floor. Over its six storeys the building comprises 11 apartments, nine private and two affordable, all of which comprise double or triple aspect rooms with exceptional levels of daylighting. The original site comprised three distinct buildings, which were subsequently replaced by a large modern scheme. Corner House attempts to bring back the character of the original structures, consolidating their identities into a single block that reflects the urban hierarchy of the surrounding streets – the grander Charlotte Street and quieter Tottenham Street, and the more utilitarian identity of Tottenham Mews. 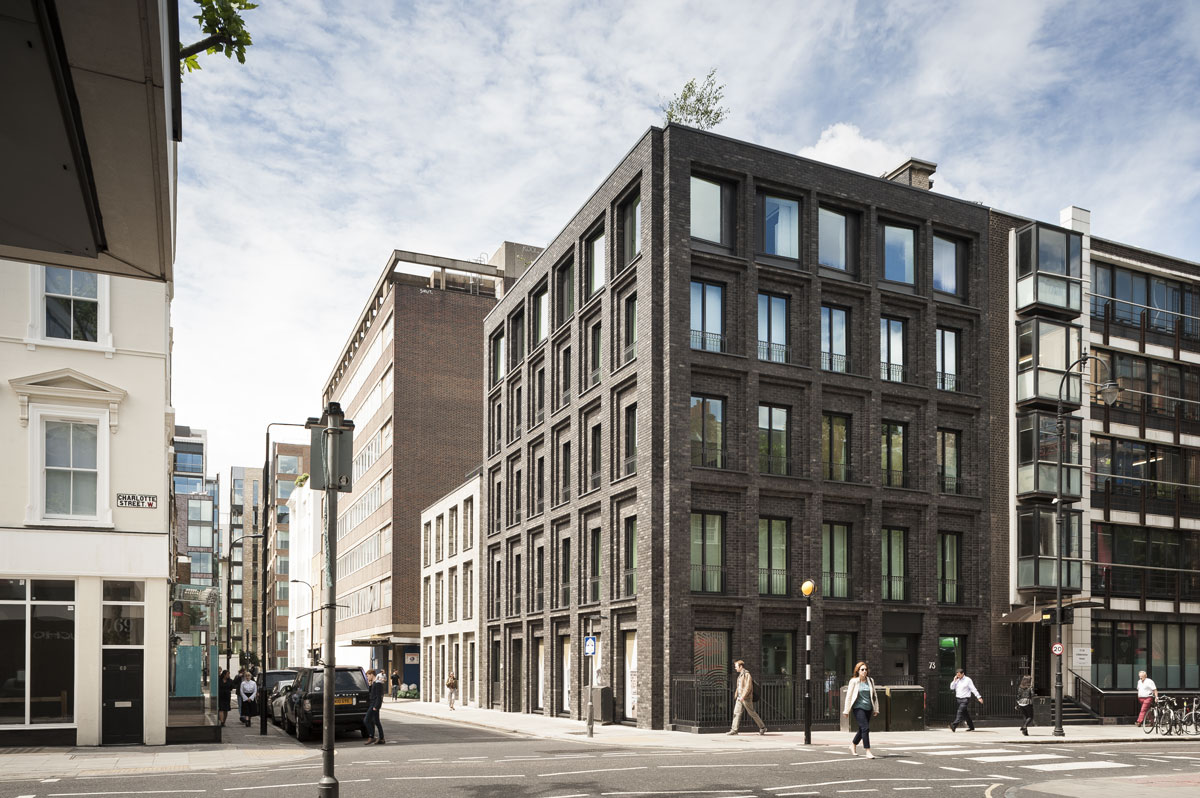 The entrances to Corner House are configured to respond to the local context: the commercial unit faces the noisy thoroughfare of Charlotte Street with its commercial frontages; the apartments have entrances on the quieter street and mews.

The pavilions on the roof offer a hidden terrain to the project that only becomes apparent upon enquiry, occupying as they do the Rights Of Light envelope established by neighbouring buildings. Corner House does not disrupt the consistent morphology of the solid brick facades that characterise the neighbourhood – however, the shifting planes of its slightly angled windows on the uppermost floor suggest something unexpected. 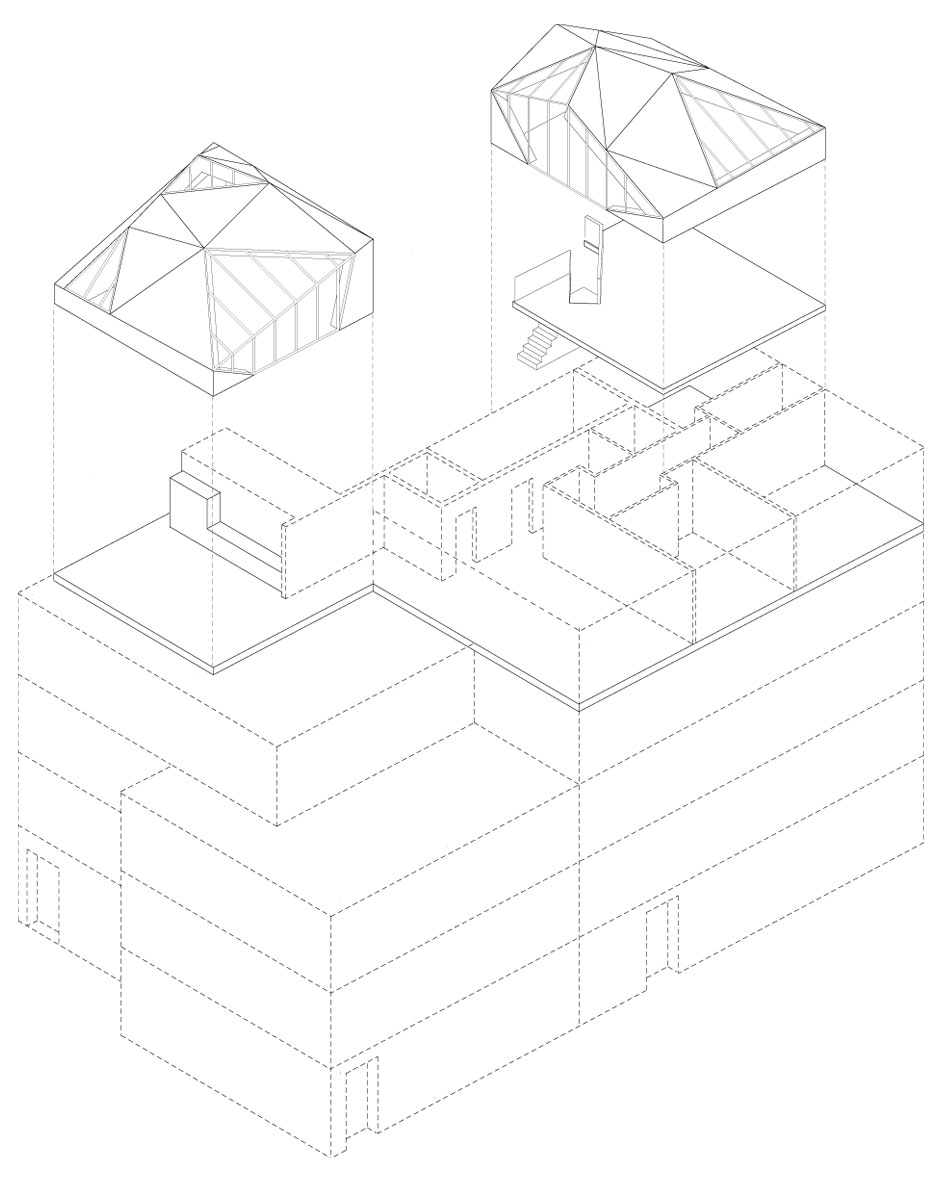 Drone photography, satellite views and new forms of mapping technologies have changed the way we understand and navigate the urban landscape. We are now accustomed to visualise the latter mainly from above, with the consequence that the roof has become a relevant fifth elevation. The articulated geometry of the Corner House façade and pavilions reflects this perspectival shift; it multiplies focal points and dissolves traditional linear perspective, therefore suggesting an alternative dimension from which to appreciate the building and its surrounding views. Technically challenging yet appearing disarmingly simple, they are in an effortless dialogue with other roof structures scattered on the horizon nearby.

Unlike most new projects that use brickwork as a non-structural cladding, here the brickwork for the main body of the building is self-supporting, bearing its own substantial weight, thereby relieving loading on the superstructure and minimising the amount of concrete used in the project and the energy embodied in its production. What could have become a monolithic façade is refined by the use of lime mortar, to eliminate expansion joints, and bespoke metalwork balustrades. 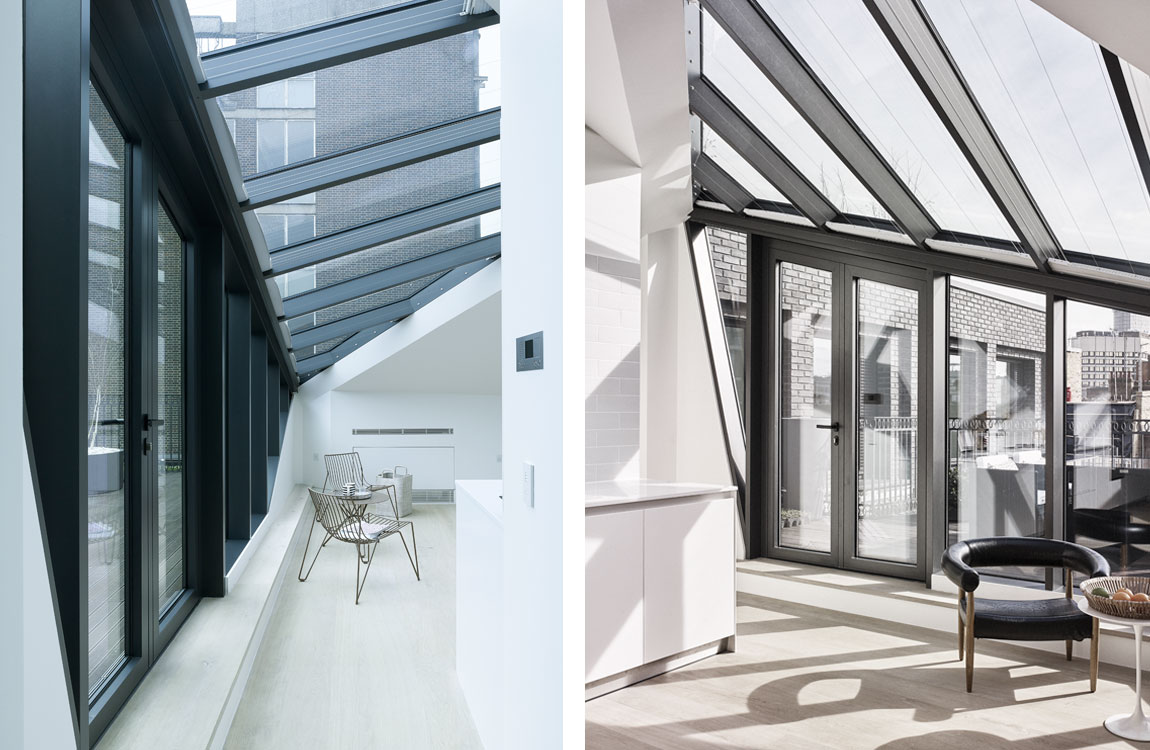 DSDHA’s analysis of Charlotte Street’s Conservation Area informed the design and ensured a contextual response. The design seeks to restore some key local features of typical Fitzrovian terraces, such as an emphasis on verticality where strong horizon lines mark a tripartite division of plinth-bodyroof, masonry construction with punched apertures and a high ratio of wall to window. 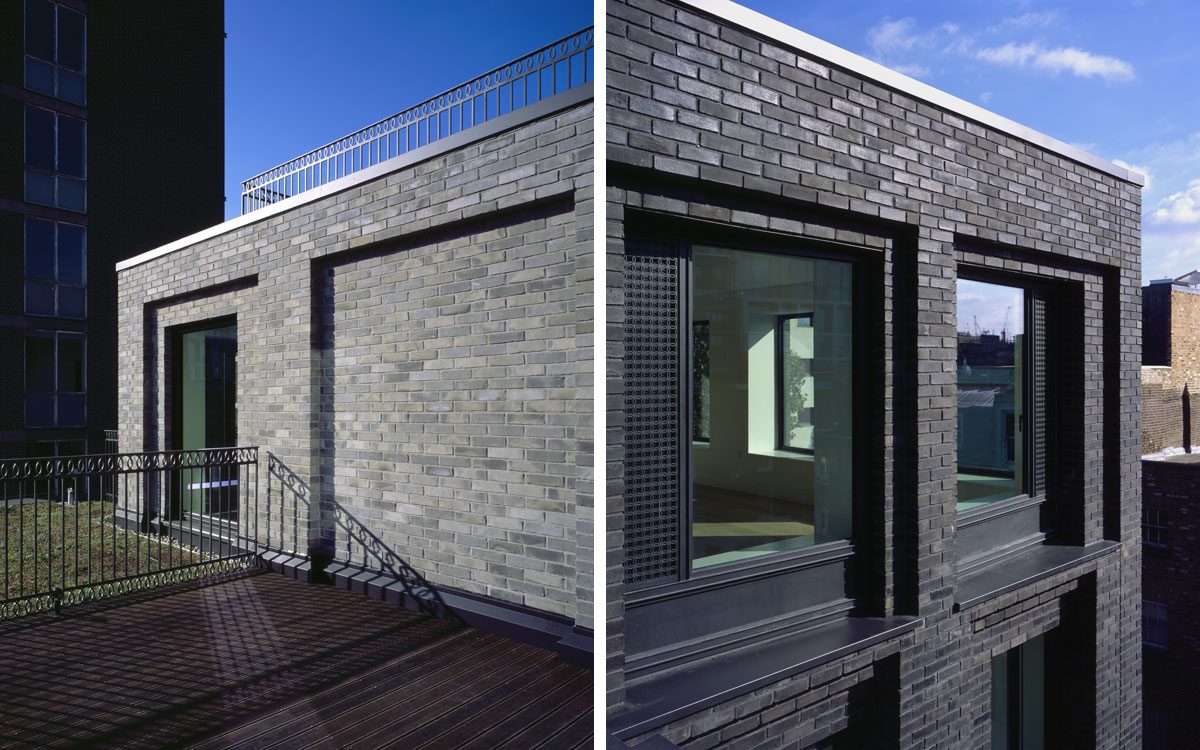 The stepped reveals to the façades were the result of extended research and testing to capture the craftsmanship of masonry construction, yet it is treated with plasticity to achieve a dramatic effect. Bespoke lintels help span the bays which relate proportionally one to another, reflecting the geometric derivations of most of Fitzrovia’s architecture. As a result, each floor has a slightly different relationship between the sill and the internal floor levels, making the building appear less relentlessly stacked and subtly differentiated.

Corner House is part of a wider regeneration plan to improve and restore the character of Fitzrovia ahead of the arrival of Crossrail to Tottenham Court Road in 2018. With over 36% of its property portfolio located in Fitzrovia, Derwent London has a good relationship with its community and, by working closely with the London Borough of Camden, they have been able to redevelop this part of central London in a holistic way. Corner House is within a 500m radius of Suffolk House, a former warehouse building that DSDHA converted and extended into affordable residential accommodation for Derwent London in 2014. The attic floor sits lightly on the existing building and its triangulated roofscape shares a formal language with the pavilion roofscape of Corner House.

To the west of Corner House, DSDHA is leading the rejuvenation of the public realm around Tottenham Court Road – a commission by the London Borough of Camden which is just starting on site. DSDHA has devised a highly sustainable transport scheme and the design of new ‘pocket’ parks, which punctuate the individual journeys through the area, lowering the speed at which one engages with this unique part of the city.