Lugares Comunes: Público – Privado is an ongoing series of 50 original and exclusive formal strategies, aiming at maximizing public space and conducted by a team of architects, chilean and foreign. This set of architecture projects for our cities, prototypes questioning the validity of established ideological and/or normative models, reproducing new and fertile public spaces. 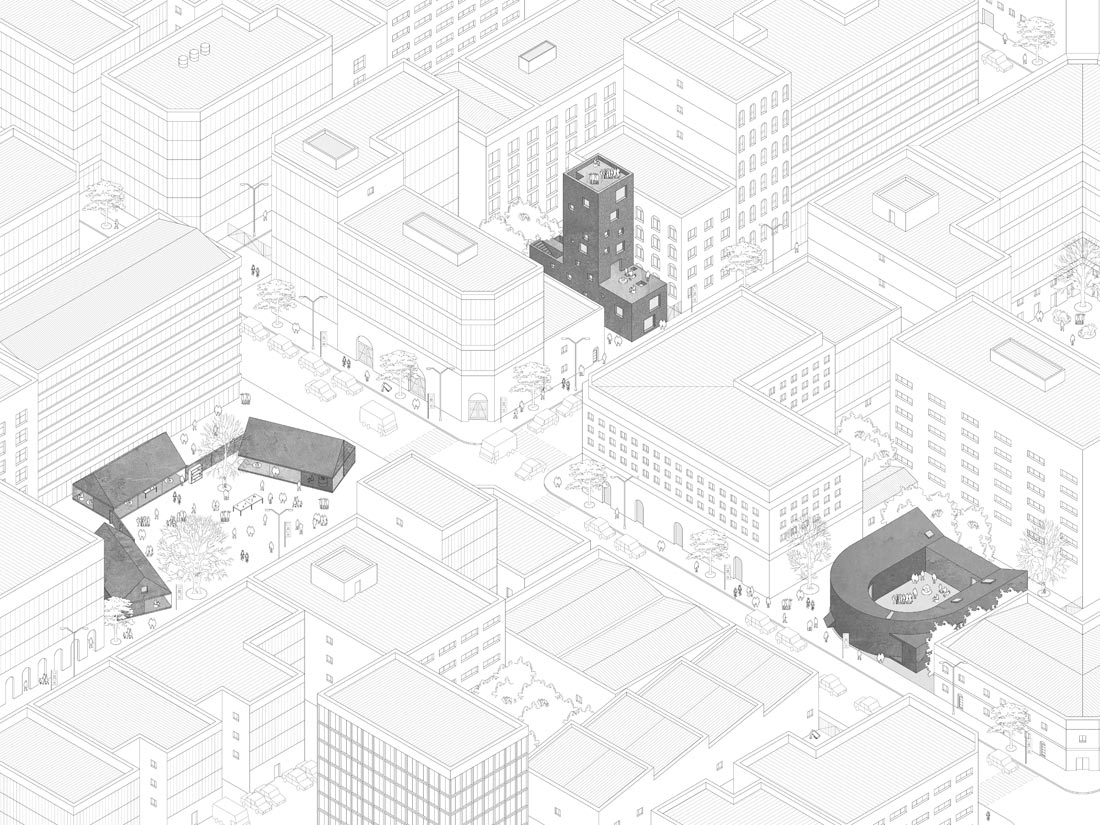 As architects, me must choose the right to the city as the front in reclaiming the public sphere. In this sense, it is important to define position towards the confrontation between public and private in space, a fundamental question of modernity today. 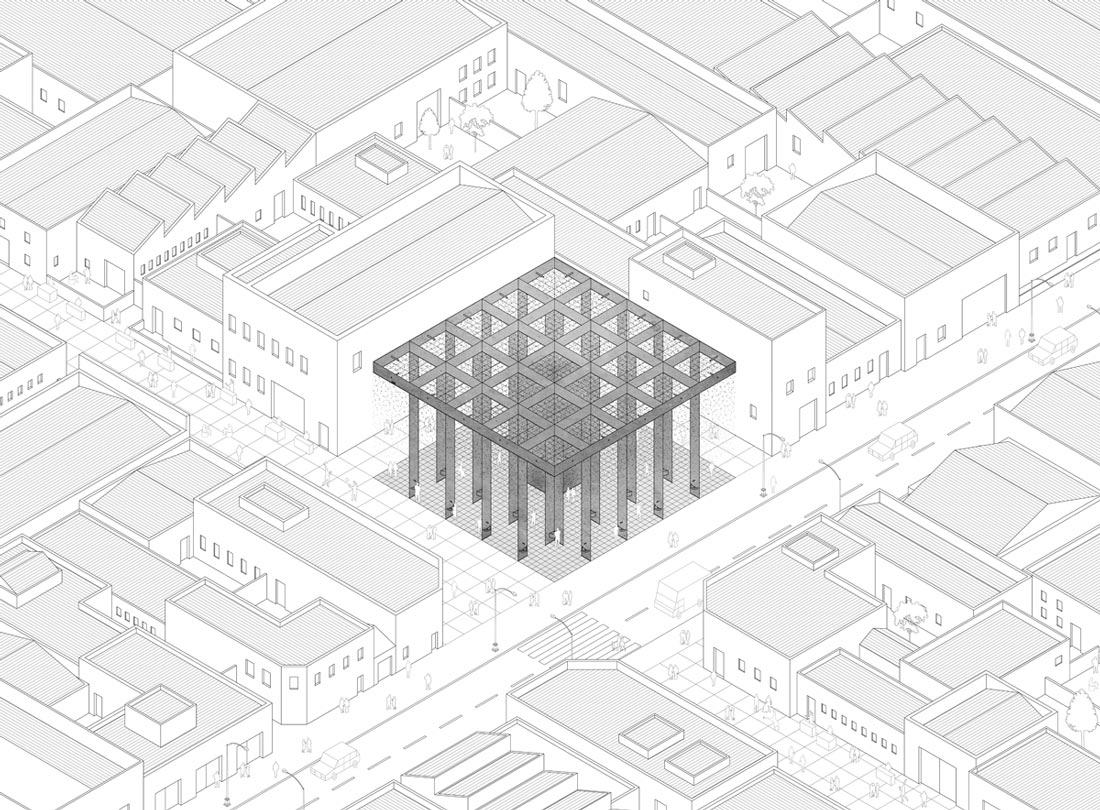 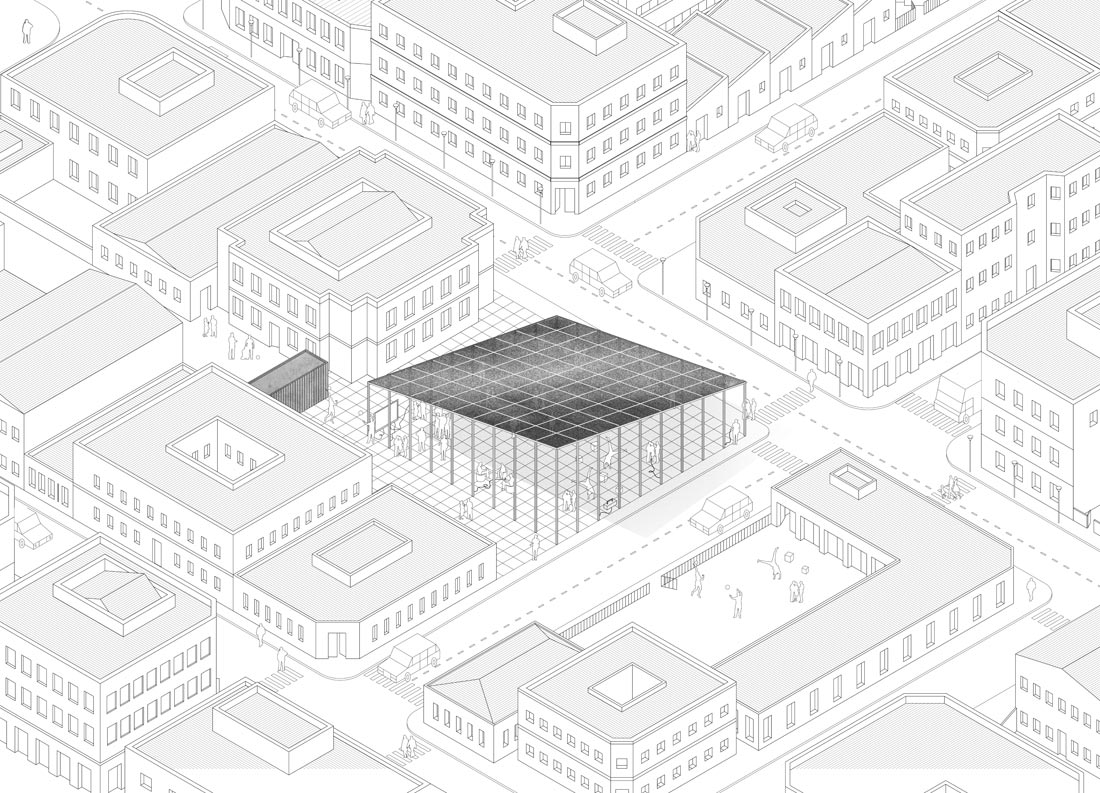 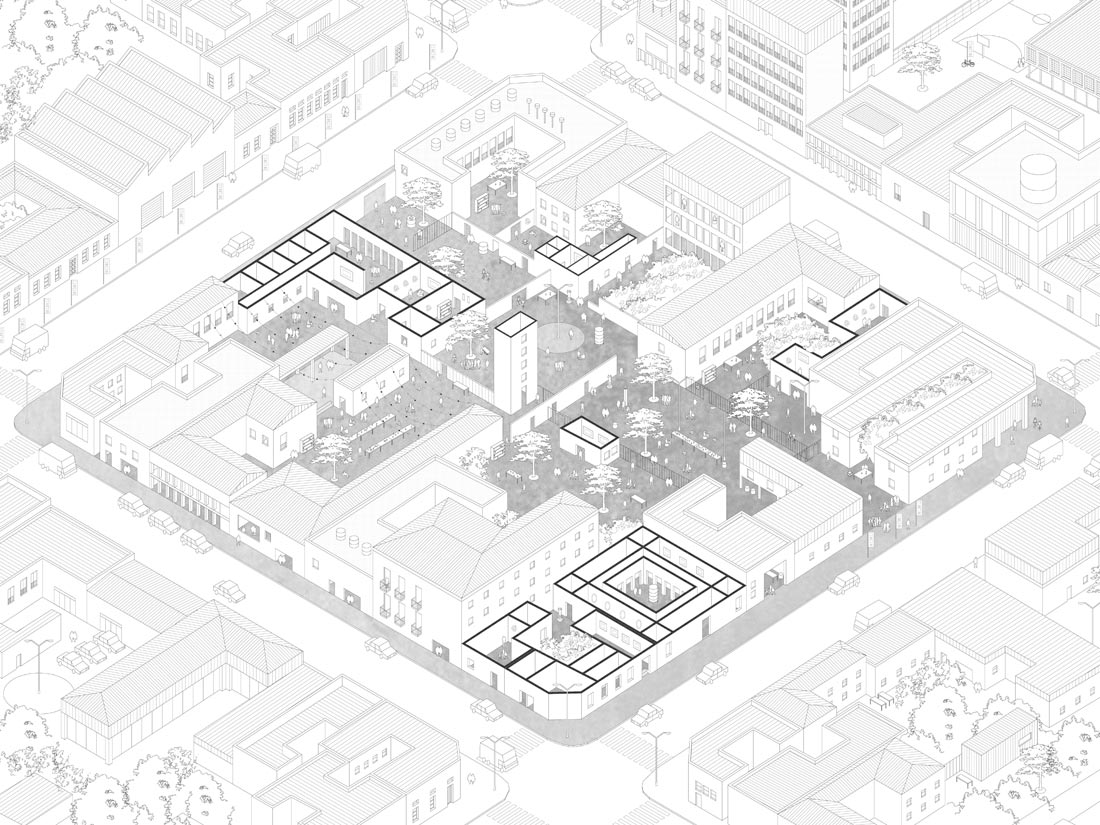 Here lies the future of architecture. It requires us to understand the collective will of the project and to define a clear position about it; to embrace the legacy of different movements in XX Century, which have been interrupted and neglected by post-modern or contemporary architecture.

The final series of cases will have a shared authorship, including all the participants under the title of this research, Lugares Comunes: Público – Privado, following the collective spirit and public vocation of this initiative. 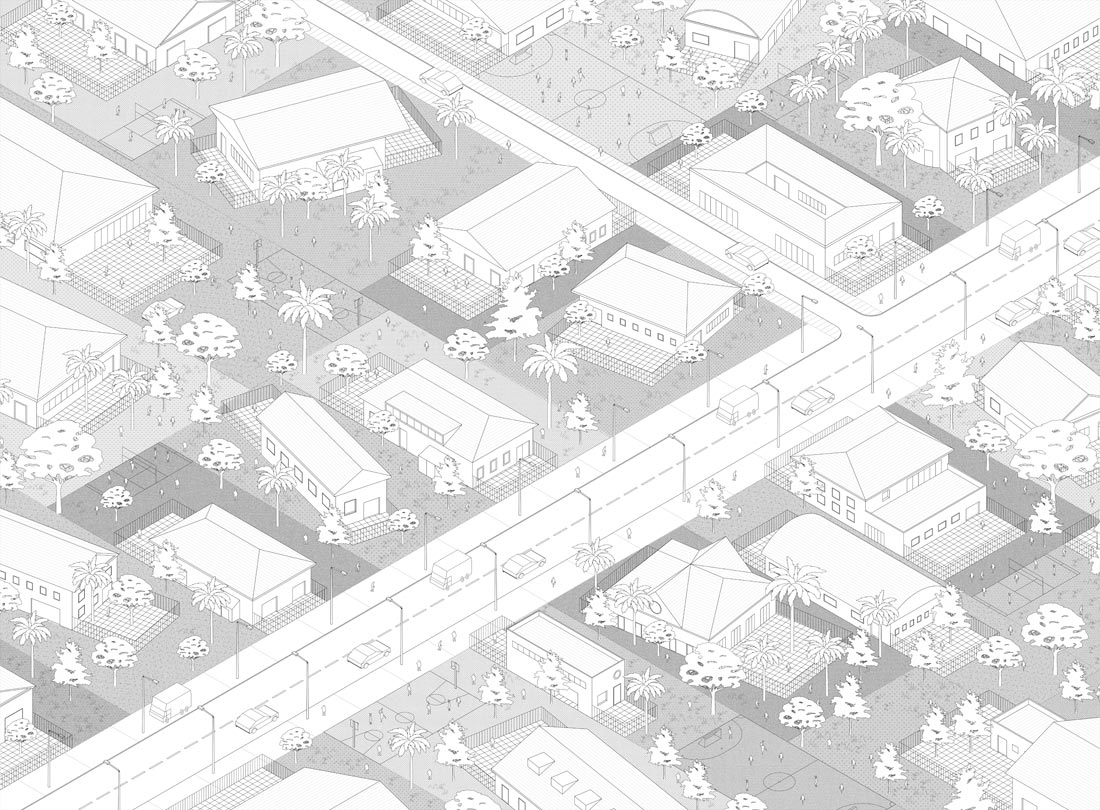 Markets Esplanade  is a contest winner, which signifies a direct implementation of the goals of Common Places research.

We propose make the best of the current fragmentation and existing structures in the area of intervention, in order to consolidate a network of places for citizens’ encounters, unique in the context of downtown Santiago and its Metropolitan Area. All of this through the strategic implantation of a series of artefacts of small and mayor scale, whose main purpose is to achieve continuous pedestrian flow, together with the up-scaling of the role of historical buildings –reorientated to their most favorable façades– and to end the historical differences between the north and southern shores of Mapocho River. 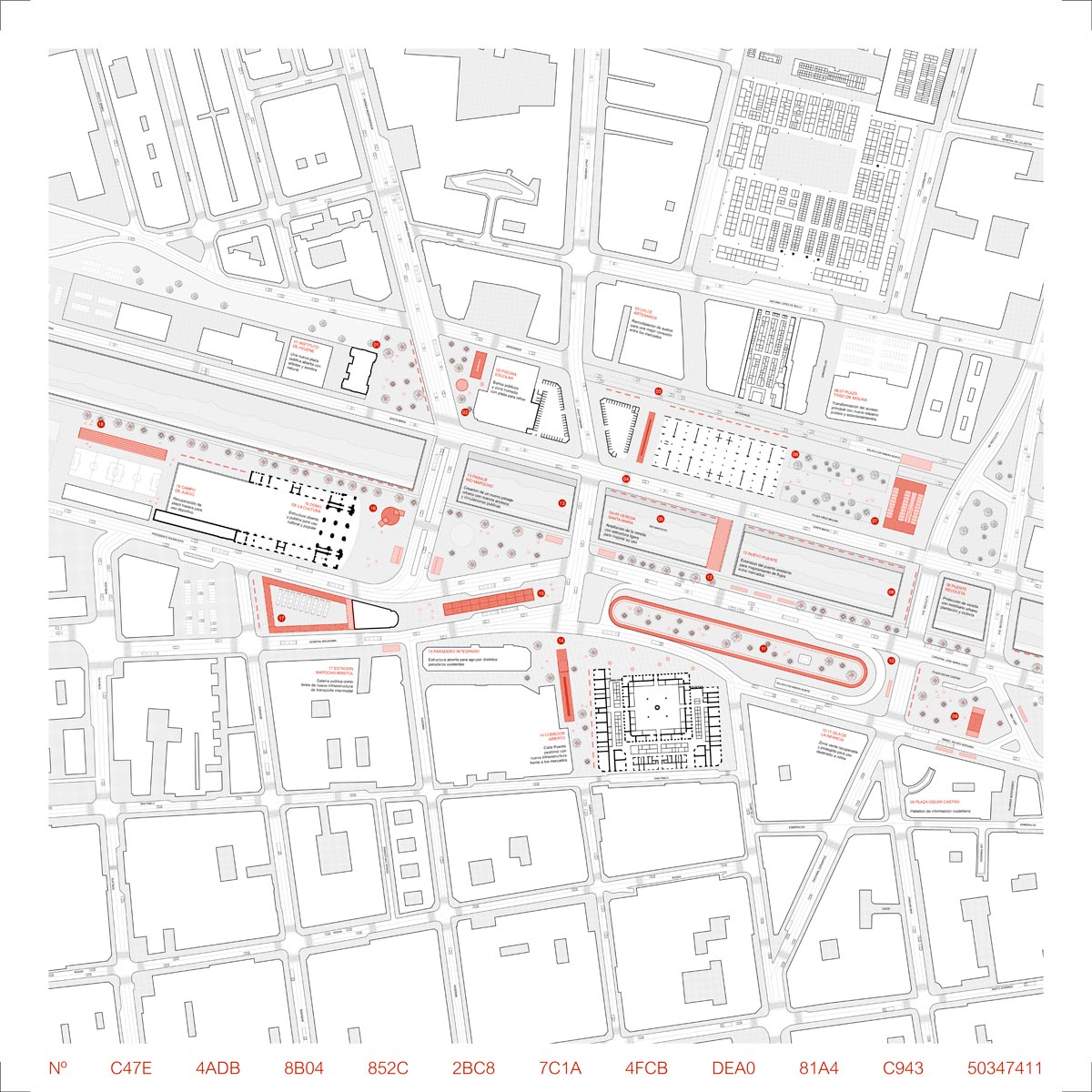 We are facing a fragmented and diverse context: a complex over-imposition of layers responding to a sectoral vision of urban space. We propose to to emphasize the specific conditions of the different parts composing this urban fabric by means of a project of strategic design, based on pre-existences and taking a clear stance in favor of public space –understood as a territory for citizens’ leisure–.

The set of monuments and historical buildings existing on site are not enough to conform a clear place for citizens and tourists: Tirso de Molina Market, La Vega Market, the School Swimming Pool or the Institute of Hygiene are isolated and disconnected, stressing the differences between the north and southern shore of Mapocho River. 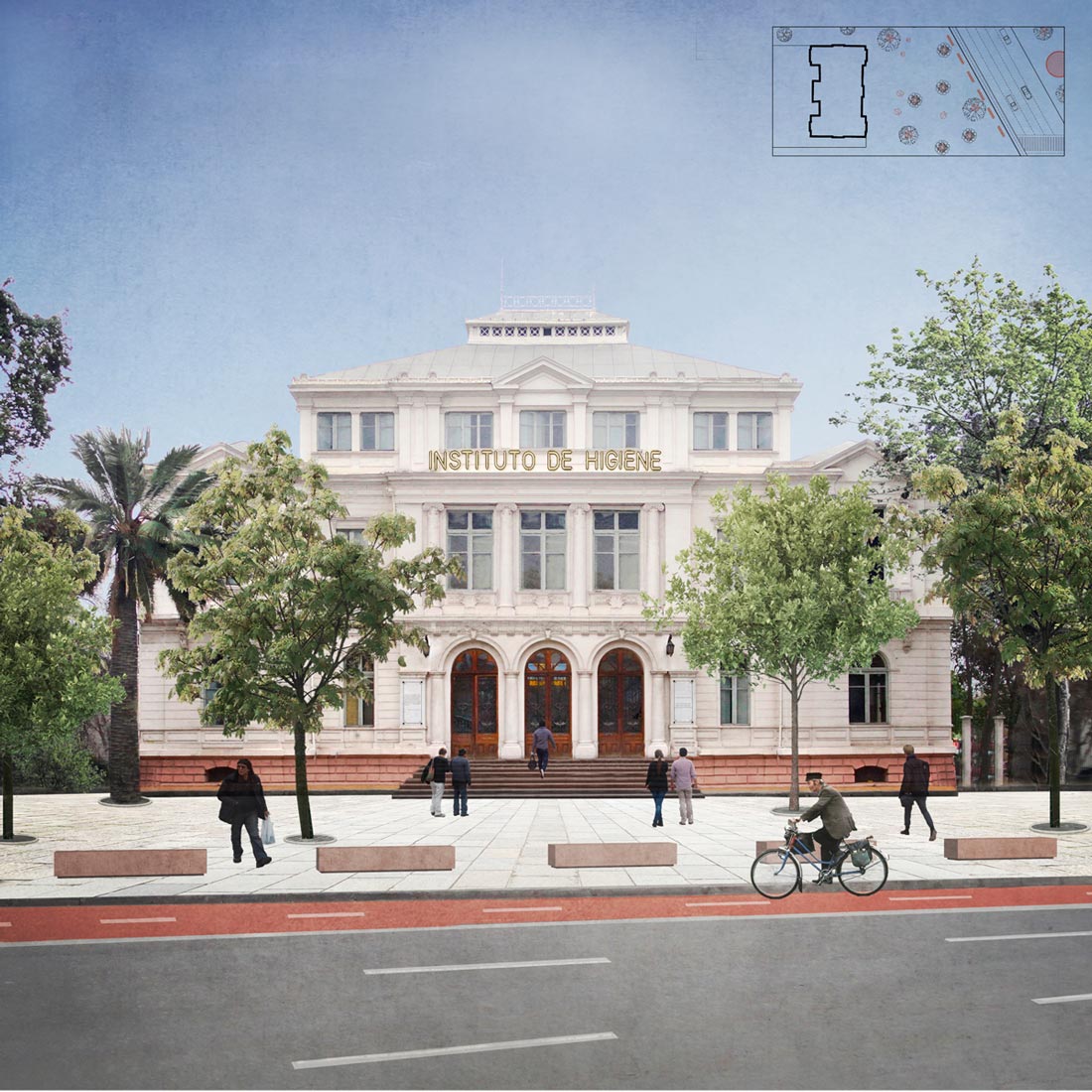 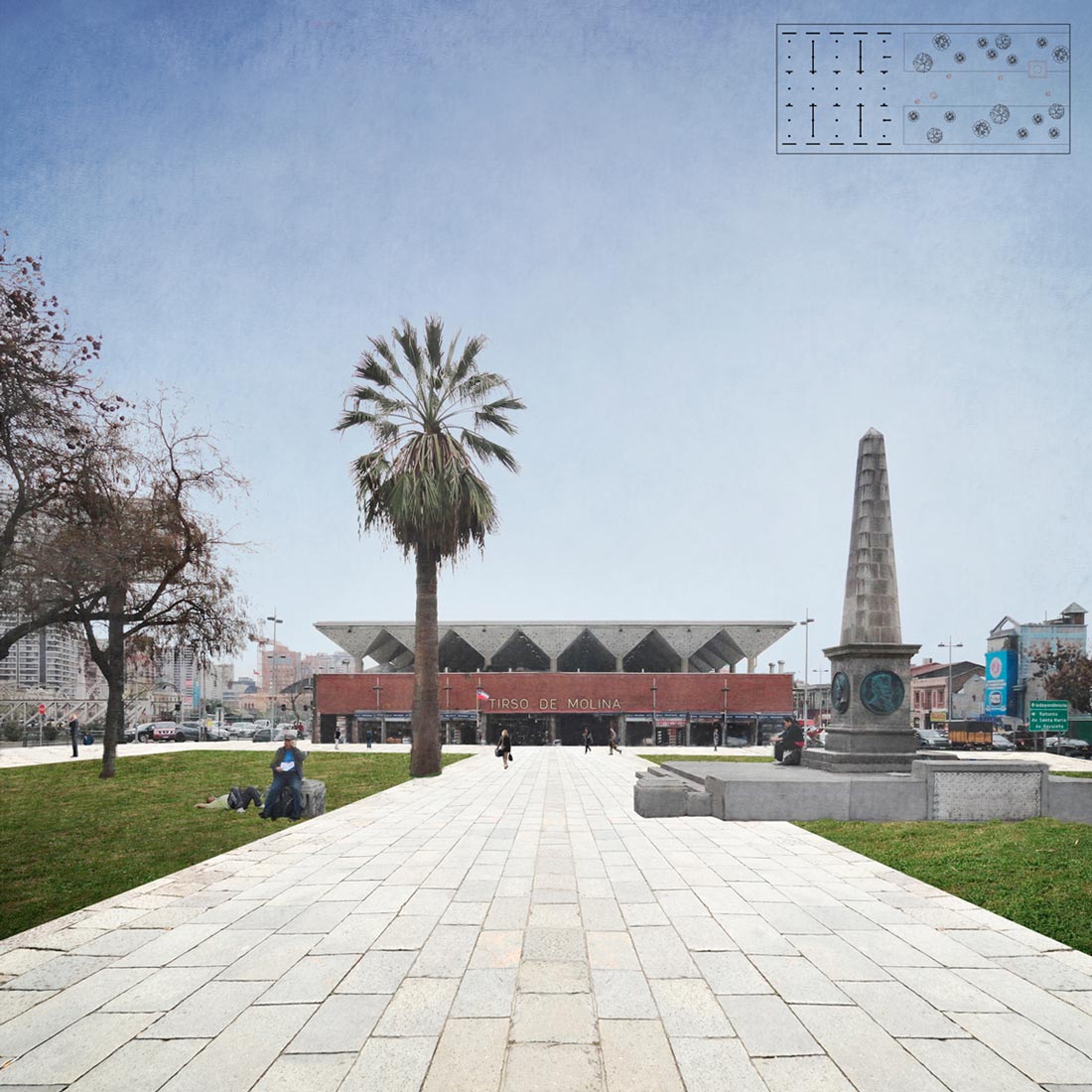 We propose to make these buildings –and their immediate surroundings– to be clearly recognizable by using a shared code of design. Each historical building is complemented with a specific intervention and program, which aims at maximizing its historical stature, revaluating them in the eyes of citizens and foreign visitors, day and night.

A shared code is also used in pavements, lighting and urban furniture throughout the site, all of them considering the human scale and universal accessibility which must exist in the area. We reclaim and make a clearer image of the ‘Markets’ Esplanade’ for pedestrians, neighbors or visitors –local or foreign–. A system of public spaces in favor of collective gatherings, civic manifestations and citizens’ leisure. 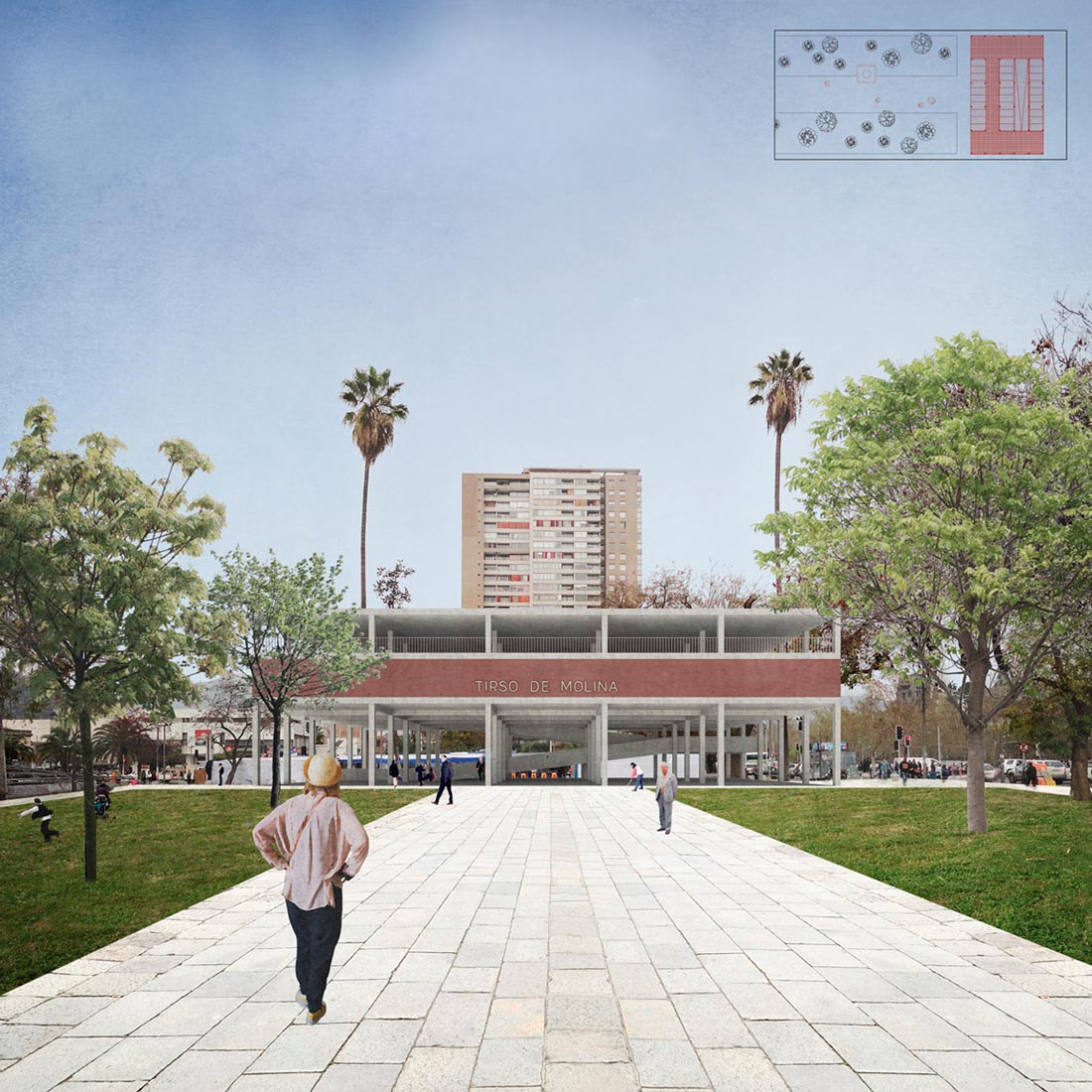 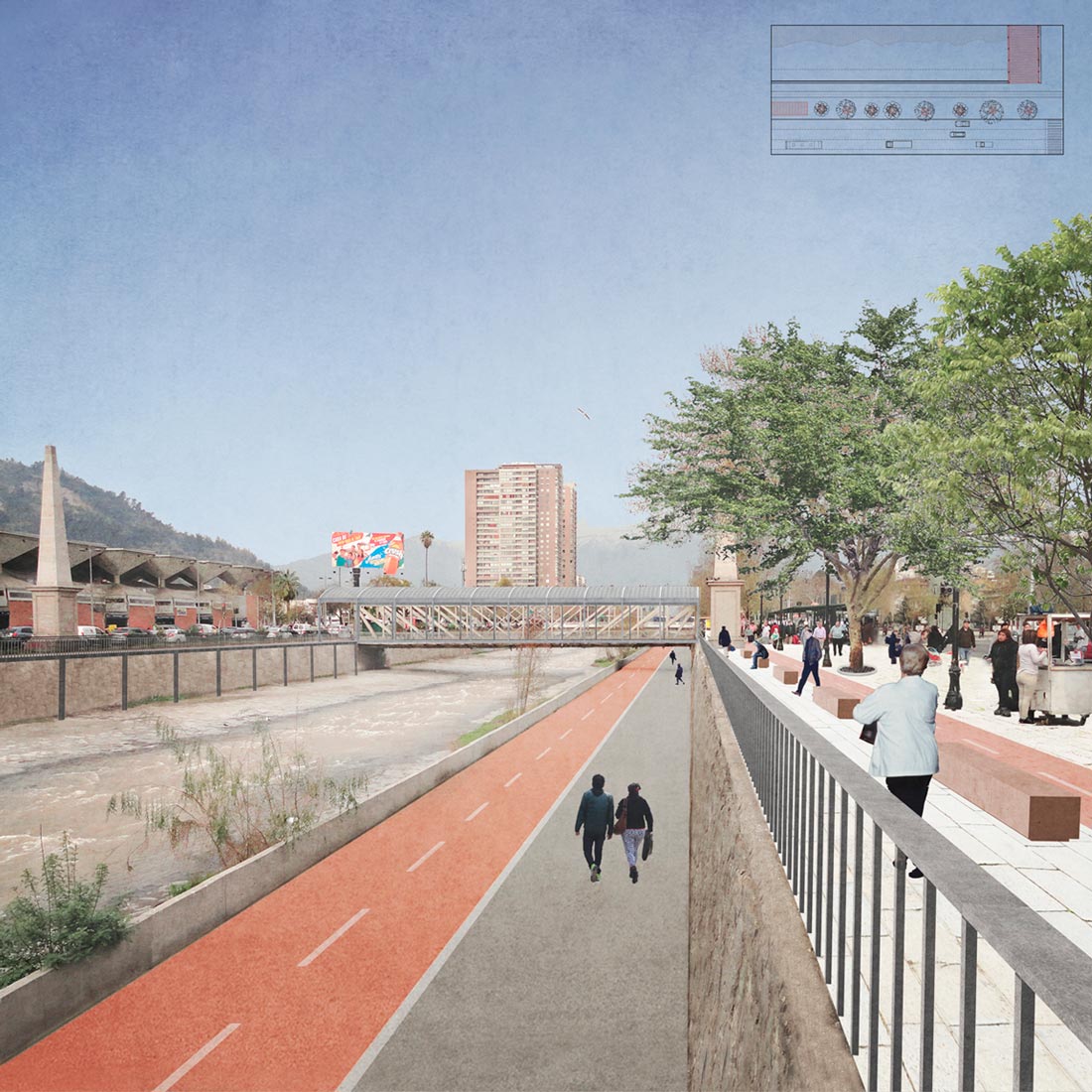 Through this series of proposed interventions we make the best of the contrast between the north and southern shore of Mapocho River: the buzzing energy of the Chimba (traditional shanty town in the northern shore of Mapocho River) and the monumentality of the historical structures of downtown Santiago. The project addresses this tension directly, by establishing a dialogue between both zones through a series of artefacts and new structures –of low building and maintenance cost– colonizing vacant spaces: public dining areas, multi-purpose courts, cultural pavilions, information points, kiosks, kids’ playgrounds, etc. all of which are over-imposed and synchronized, strengthening the existing network of activities currently happening on site. 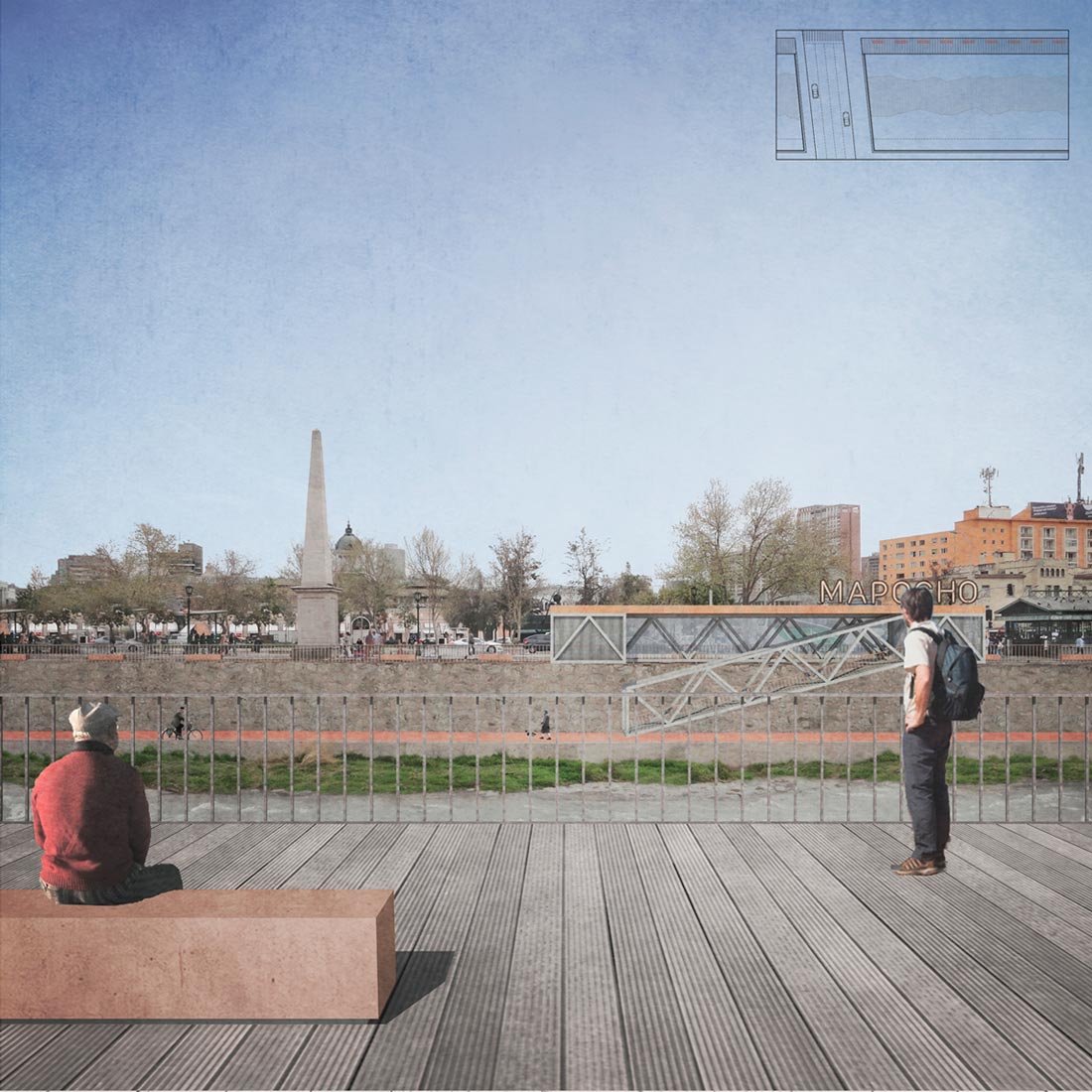 A system of flexible spaces of encounter, ready to be appropriated by active citizens, engaged in improving their quality of life and increasingly interested in expanding the limits of what is possible. 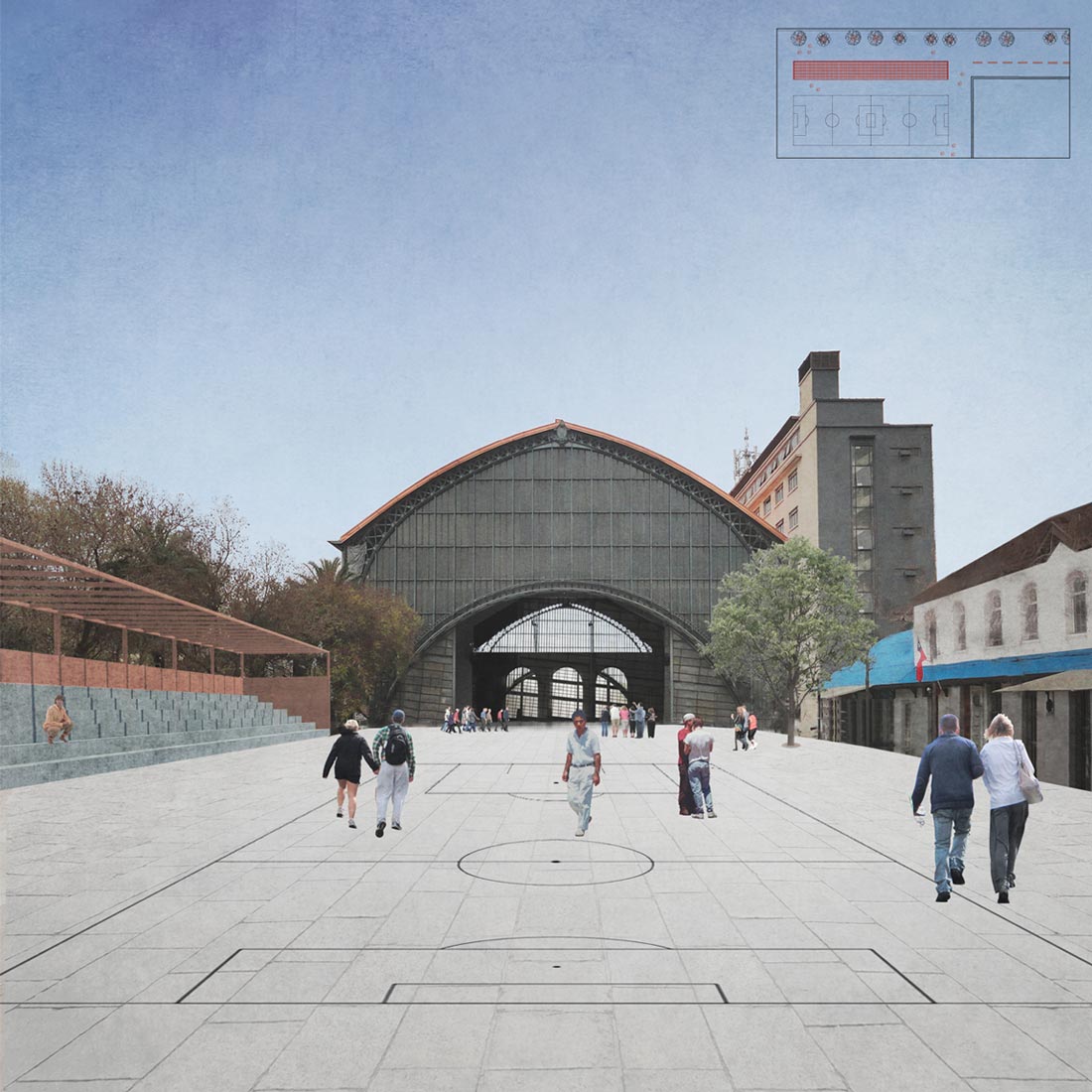