Co-ownership of Action: Trajectories of Elements

Your actions are not yours alone. Any act, however trivial, sits atop an accumulation of countless acts that arose from your interactions with someone else. Therefore it can never be said that what you do belongs solely to you. 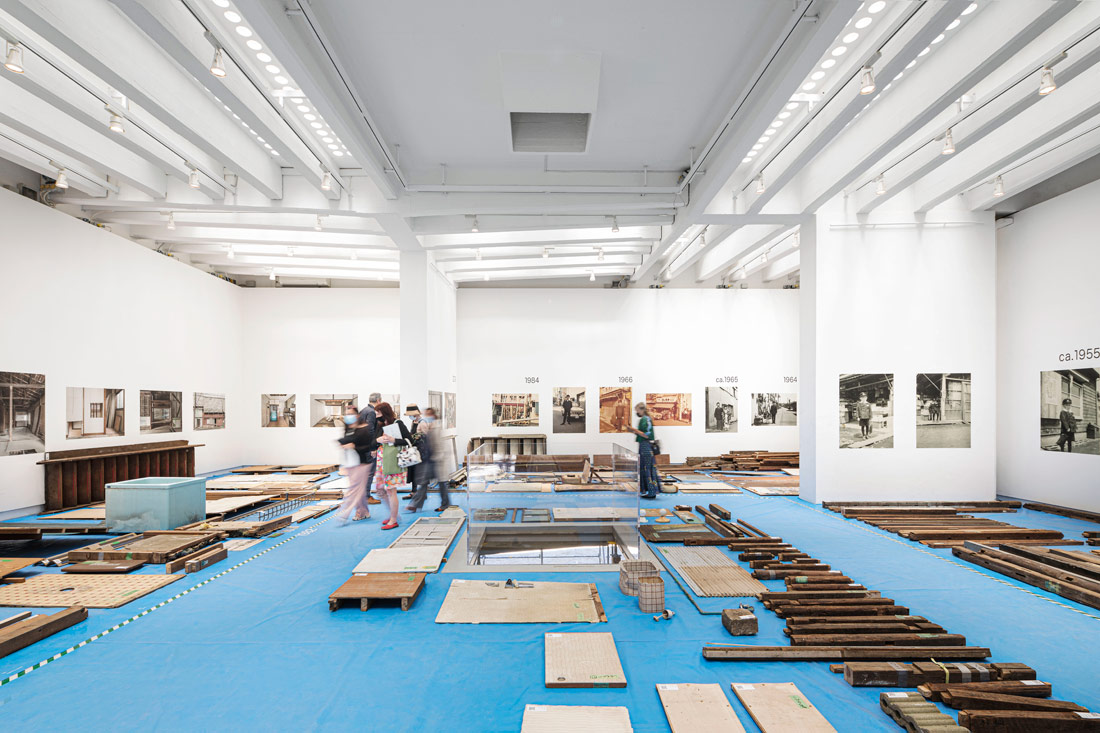 This exhibition consists of an extremely ordinary Japanese wooden house. A country at the forefront of the world in population decline, Japan is awash in houses that have outlived their usefulness and sit there awaiting demolition. The house we shipped to Venice is one of them. We named it Takamizawa House in honor of its original owner.

However, Takamizawa House did not arrive in Venice intact. To fit it into the shipping containers we had to dismantle it, a process that entailed the loss of many of its parts. Our team of architects replaced these lost elements with new materials or those obtained on site in the course of working with local artisans to restore and reconstruct the house in Venice. 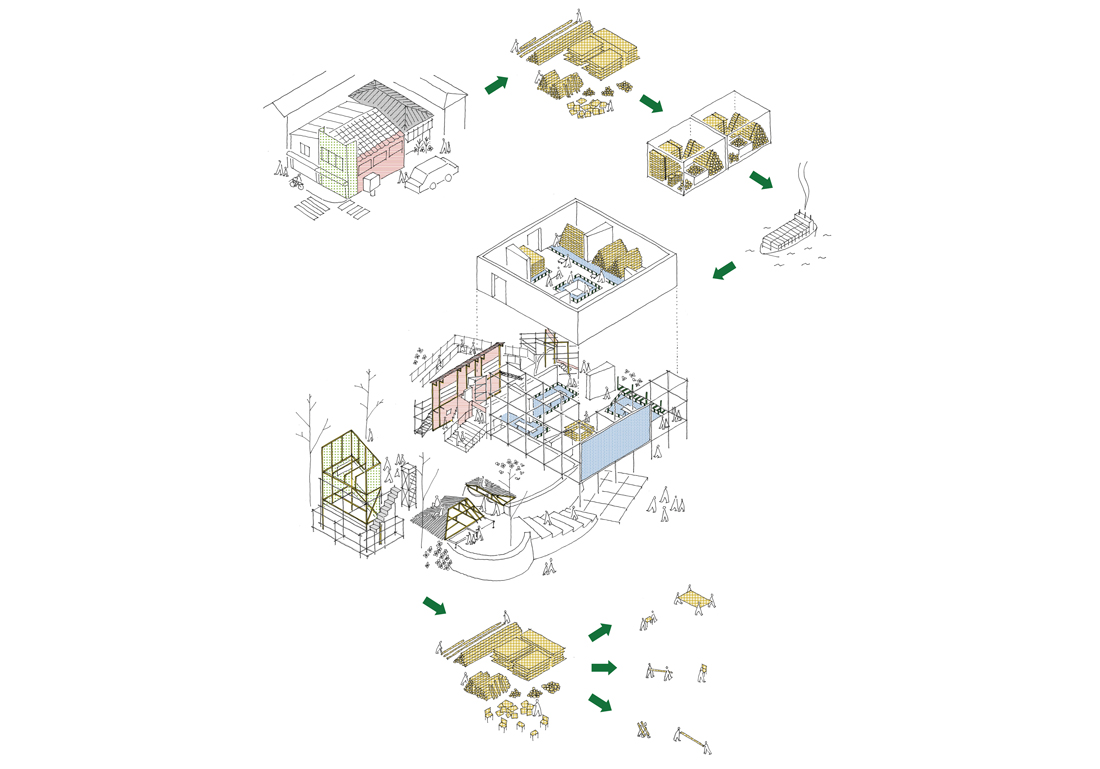 Nor did we attempt to restore Takamizawa House to its original state. Instead, we repurposed its elements into objects appropriate for the Venice site, converting the roof, for example, into benches. The curious structures visitors will see in the garden of the Japan Pavilion are indeed parts of the original Takamizawa House, now enjoying new life in new configurations.

Elements that were not used in the garden are on display inside the Pavilion itself, which serves as a warehouse for the project. After its initial construction, Takamizawa House underwent numerous renovations and expansions over the years that altered it in complex ways. Arranging its elements by era thus provides a clear picture of how the house contains the strata of successive periods in the history of postwar Japanese housing. For example, the earliest elements were primarily hand-made, but as time progressed these were replaced by mass-produced elements, a visible manifestation of the dramatic changes that took place in Japan’s construction industry over the course of the life of the house. 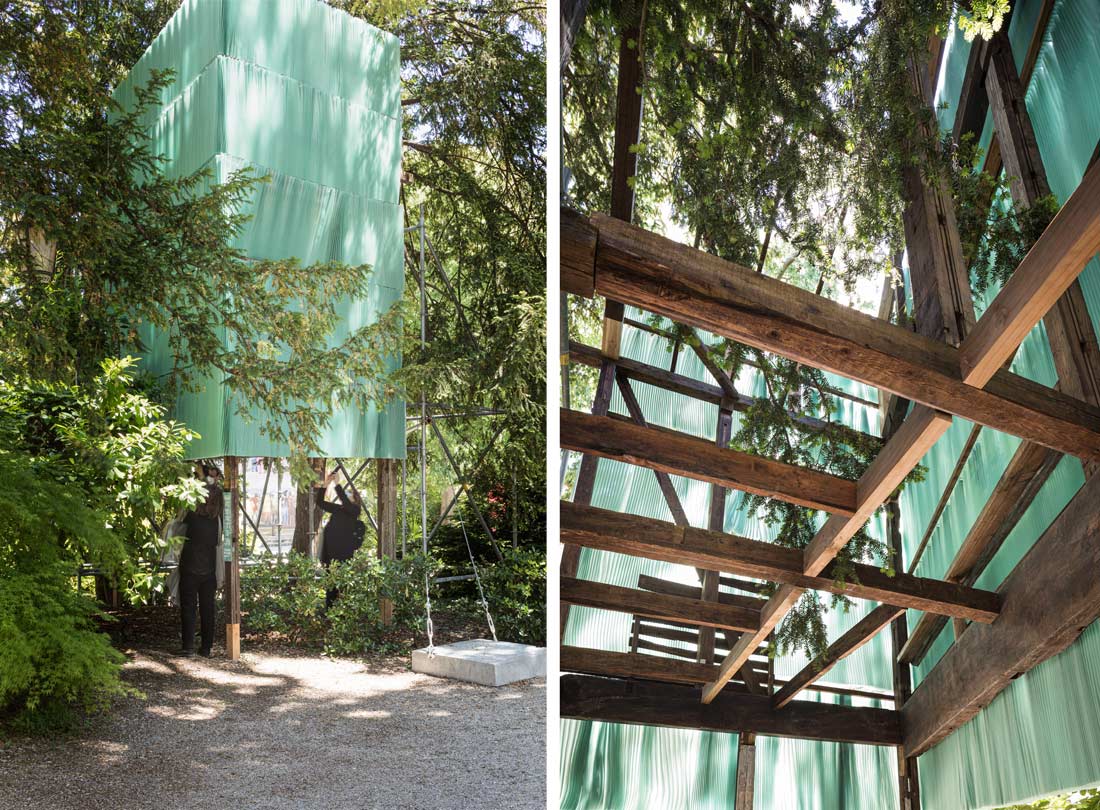 Upon viewing this thick accumulation of strata with one’s own eyes, it should be evident that the project architects have done only the slightest overwriting of that history. The trajectory that Takamizawa House has taken in its long journey through time and space to arrive at this place is proof of how our actions are ineluctably rooted in the past and linked to the future.

When this exhibition ends, Takamizawa House must once again be dismantled – but it would be a terrible waste to completely terminate the life of this edifice, which embodies the cumulative skills and ingenuity of so many people over so many years. In the long relay run of architecture represented by Takamizawa House, the architects who collaborated on this project were recipients of the baton for just one brief segment. We have come to view it as our duty to pass the baton on and keep the relay going.

Happily, the pandemic has given birth to a new association of curators around the globe: the Biennale Architettura 2021 National Pavilion Curators Collective. From this group has emerged a project to which we can pass the baton we received, thus linking the past to the future.

We owe this opportunity to the curators Sudarshan Khadka and Alexander Eriksson Furunes of the Philippine Pavilion at the Biennale, whom we met through the Curators Collective. They have an ongoing community project in Oslo, and thanks to their good offices, Takamizawa House will be moving on. Together with the Philippine Pavilion exhibition, the house will be reconstructed in a corner of an apartment complex in the Oslo suburbs, where it will serve as a community facility for local residents. Meanwhile, plans are in progress to upcycle materials left over from that transformation into a variety of products for use by supporters in Japan. The 3D data on the elements of Takamizawa House will be posted on the Internet for free access by anyone who wishes to use it.

Takamizawa House floats in the midst of a vast expanse of time and space. Of course, this is not only true for this particular house. At the level of its constituent parts, every building is just a temporary aggregation of a vast number of elements. Hence a work of architecture cannot be said to belong to a specific individual or individuals. A building stands atop the countless cumulative actions of countless people. In that sense, a building – or a city, as an aggregation of buildings – is the collaborative creation of all those people. We might add that building materials – or any materials, for that matter – may therefore be construed as something to be shared among all members of society.

Architecture exists amid the vastness of the space-time continuum. We believe it should be possible to find a common platform for diverse actors to live together within that continuum.

All photos by Alberto Strada, courtesy of the Japan Foundation.