The project embodies a new way of making urban planning. Fueled by massive information (open data and big data) and complemented with qualitative data arising from citizen participation, the project applies novel methodologies of spatial analysis based on machine learning and artificial intelligence to inform, simulate and draft a public policy that puts the focus on preserving livability in cities. 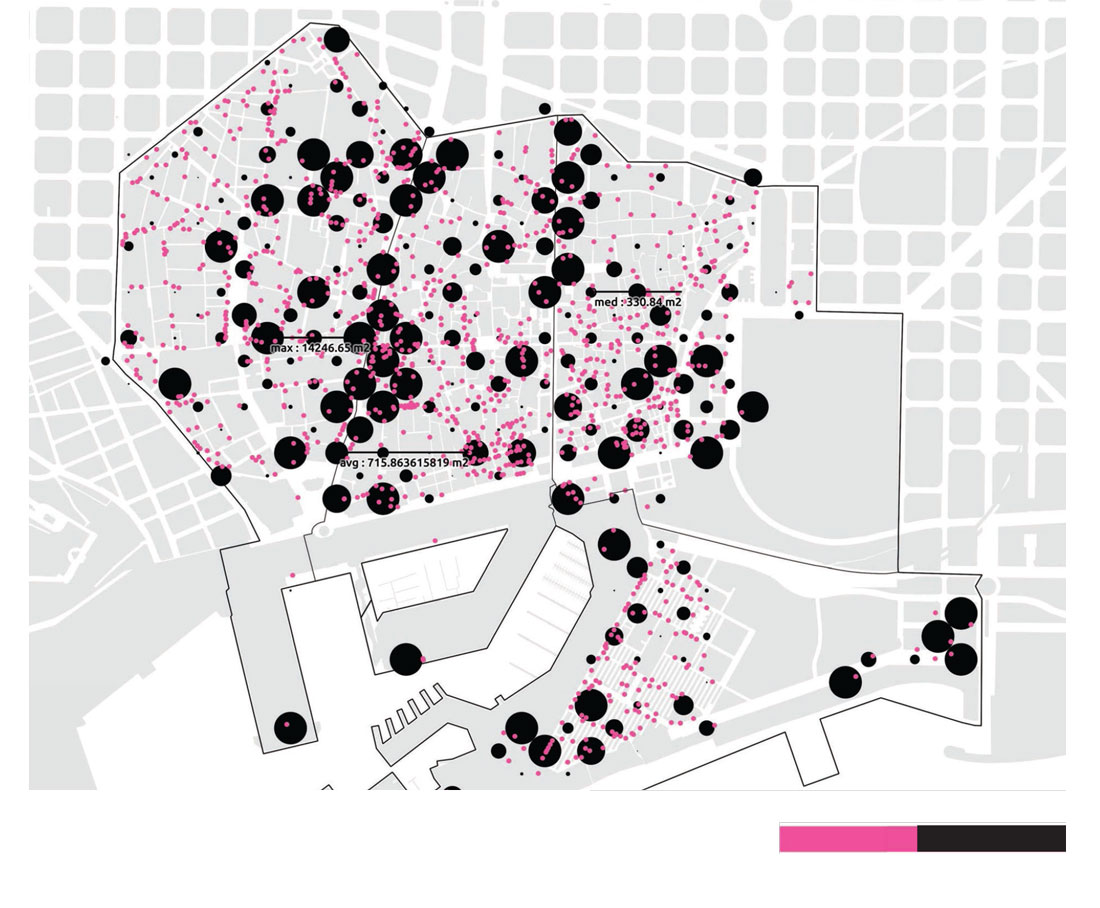 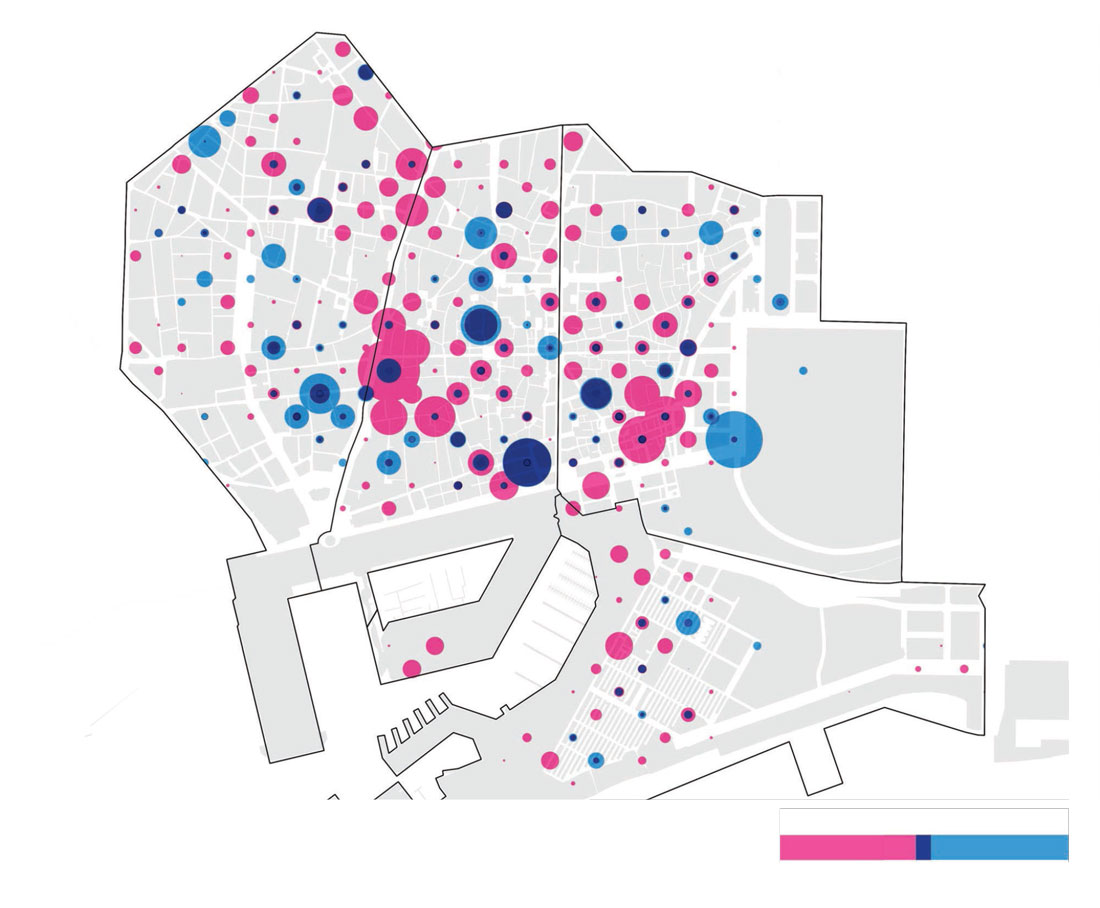 The use of technology has radically transformed an existing type of master plan which regulates public establishments, food shops and tourist services in the central district of Barcelona. The area has a dense and vulnerable population living within a fragile urban morphology. At the same time, it has a high rate of economic activities – specialising in leisure – that generates negative impacts on the life quality of residents such as noise, cleanliness, people in public space and increment of logistics.

Given the complexity of the urban context, the project has undergone 4 phases each of them generating its own outcome: research (data driven diagnosis), co-creation (citizen participation), proposal (simulation tool) and approval (regulatory framework). 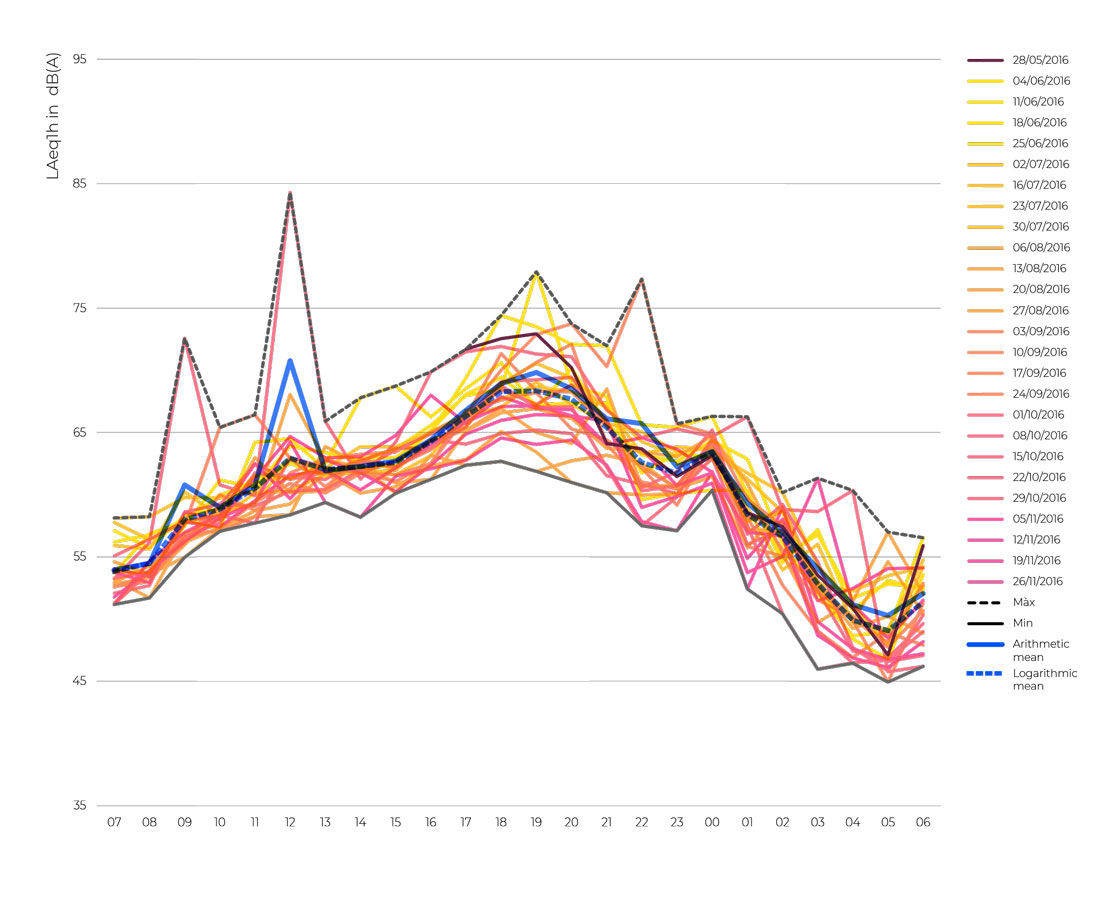 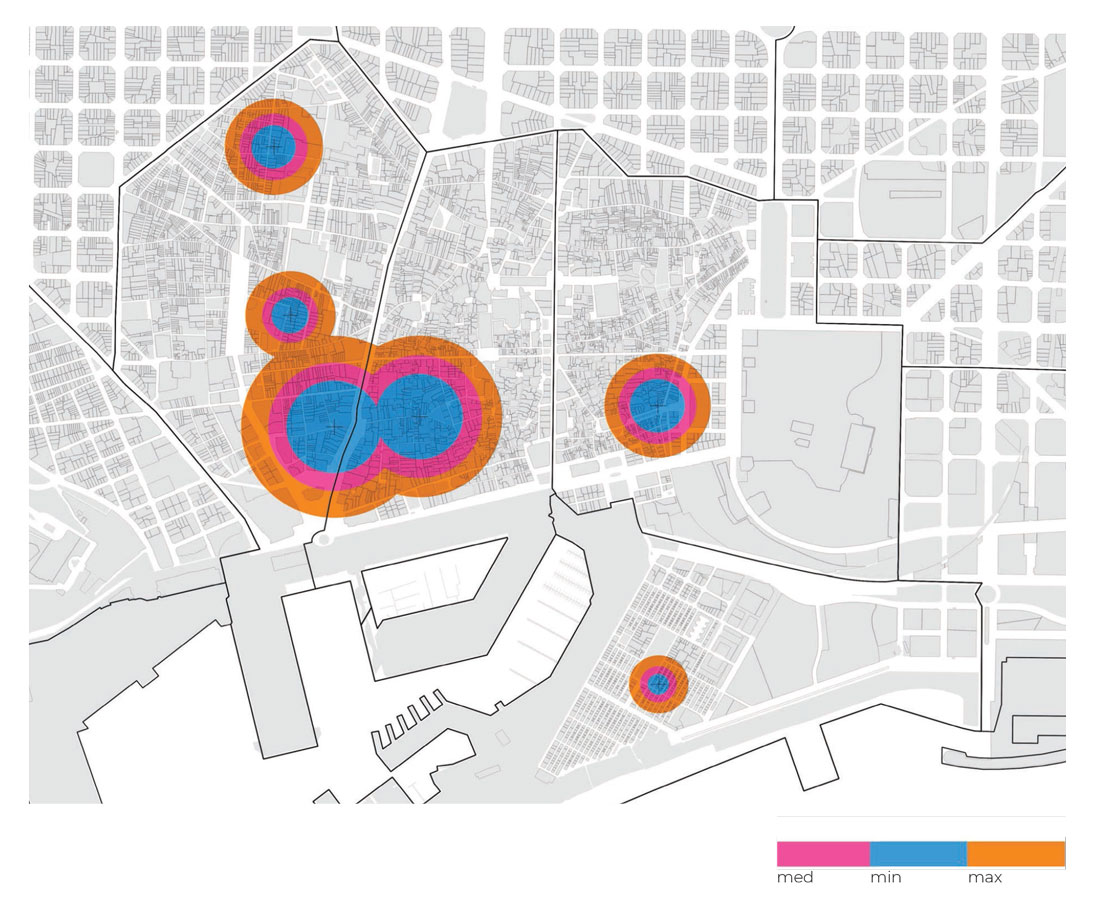 The research phase started in october 2016 with the drafting of four preliminary studies prior to the kick-off of the drafting process (April 2017) related to the description of the urban fabric (data atlas), the impact of nocturnal activities on the health and the tourist trends and their impact in local commerce.

Specifically, the data atlas (consisting of more than 150 cartographies of the district) provides a solid structure to justify the Plan main objective -to preserve the quality of life in cities- thanks to the use of cut-edge technologies (sensitisation, machine learning, artificial intelligence) and European transparency laws that have made available relevant information about public management, urban services and citizens’ behaviour. 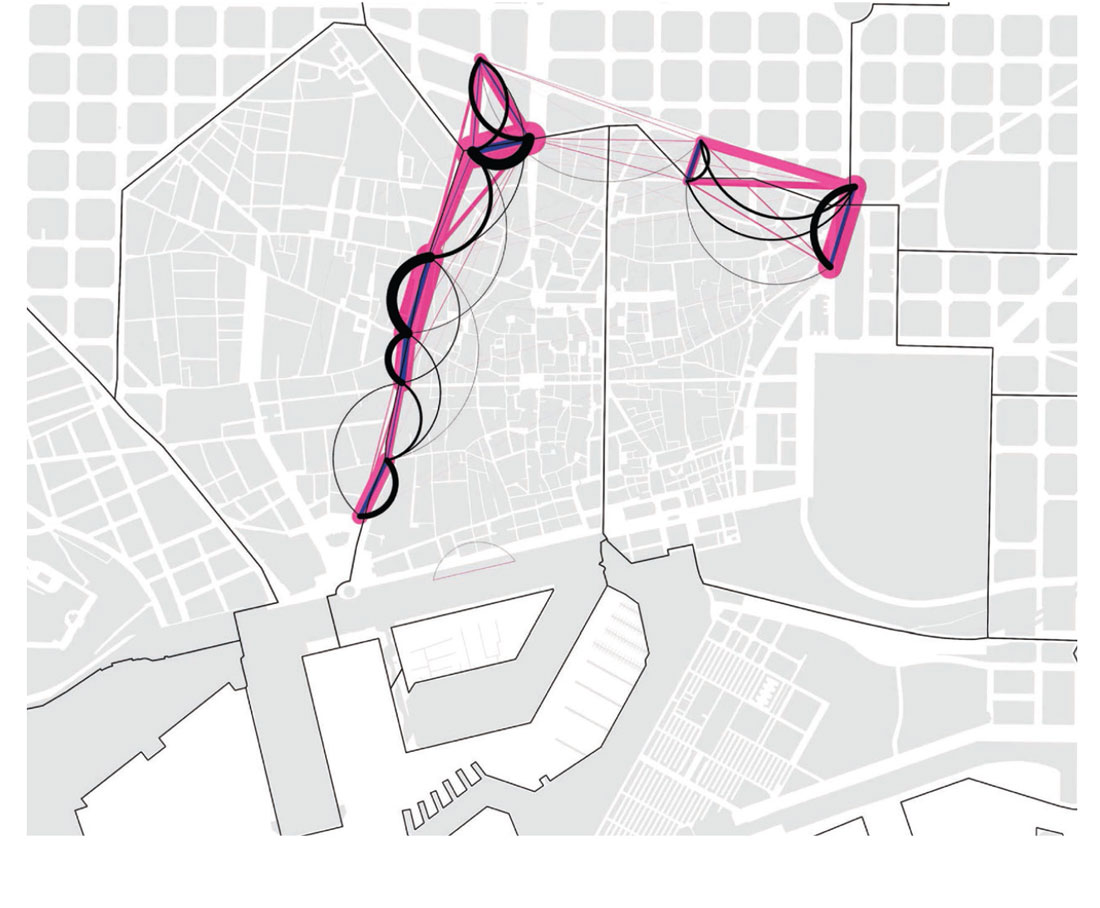 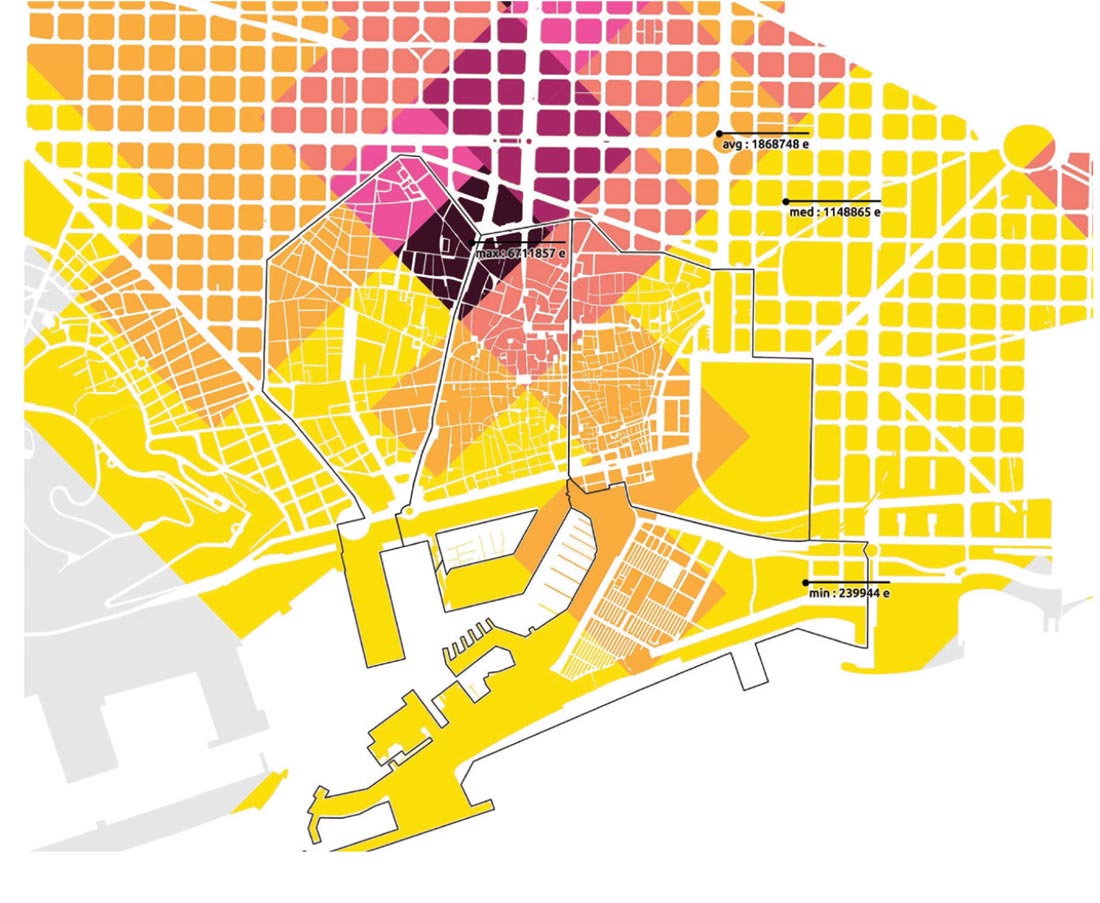 The data atlas not only illustrates and measures for the first time the physical and sociodemographic characteristics of the urban fabric, the type and saturation of economic activities, the paths of citizens and visitors in the neighbourhood but also describes the urban impacts on the health of inhabitants (caused by noise, pollution or residential vulnerability).

The co-creation phase, driven by technicians and the previous diagnosis, has forged a large consensus thanks to a participatory process (local entities, retailers and neighbours worked together in workshops, public events, interviews with selected actors and online participation through the City Council digital democracy platform Decidim.barcelona) and the political implication of the City Council, that co-authored the plan. 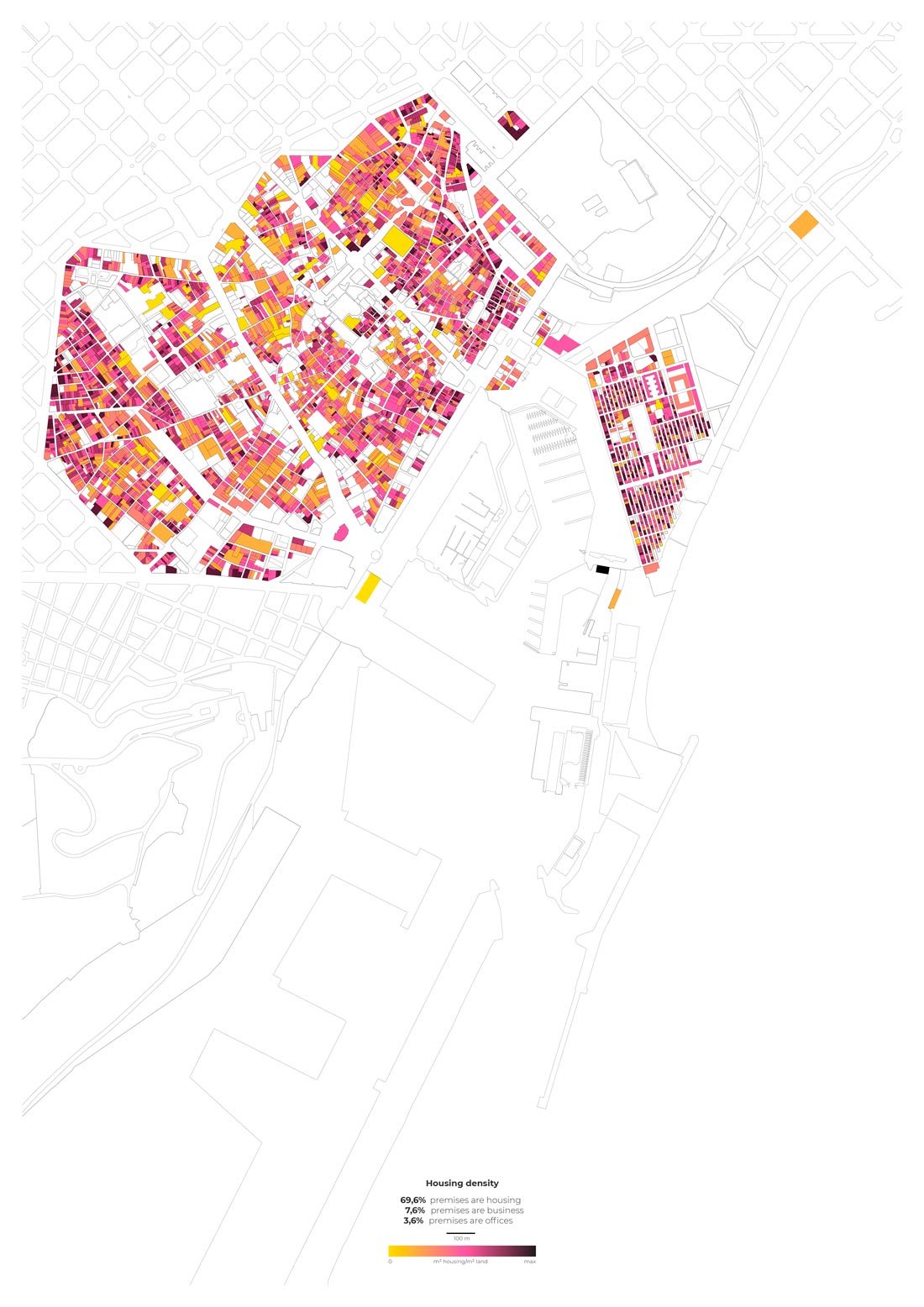 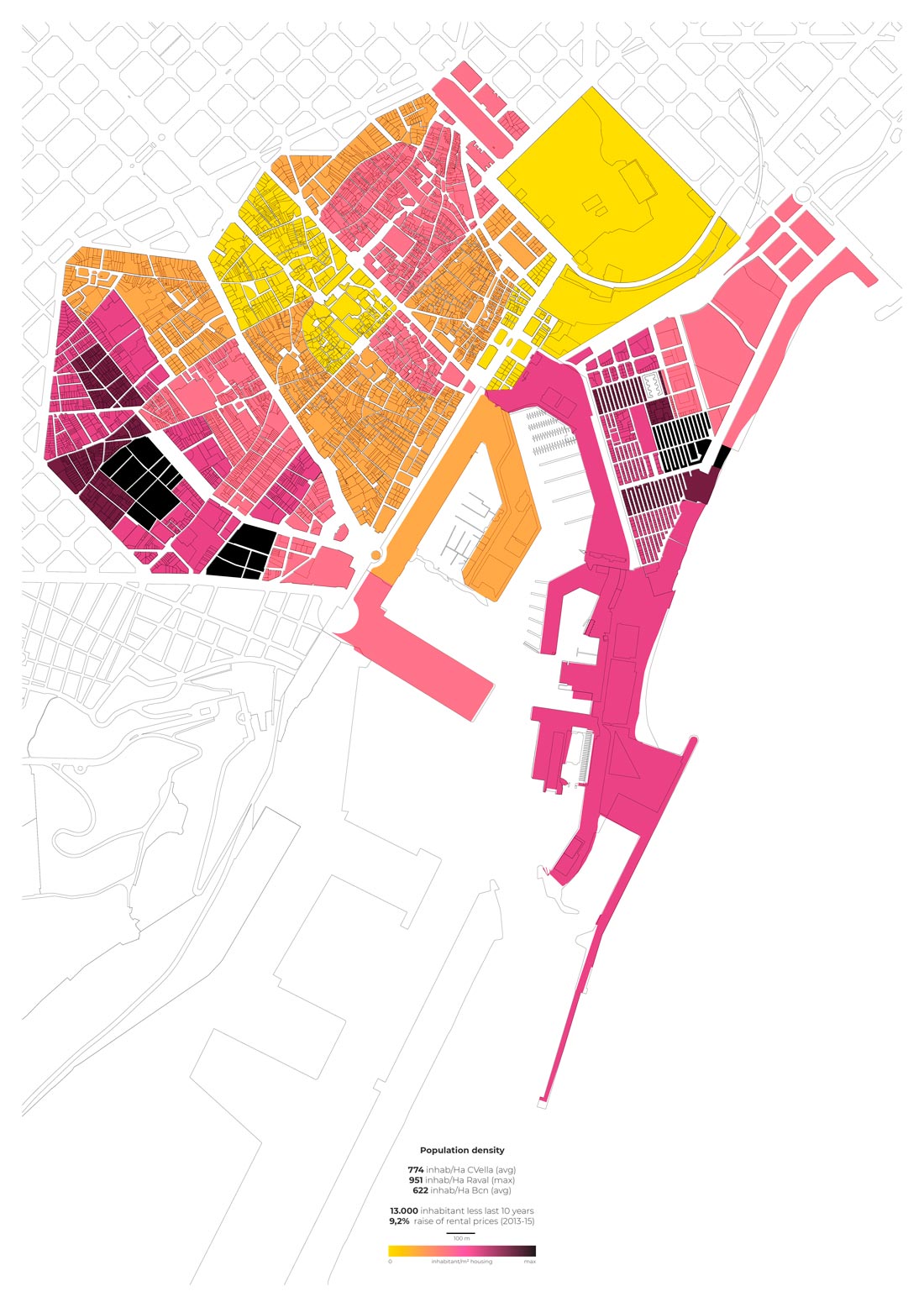 From the citizens perspective, they were involved in a massive data collection process, empowering them to build data sovereignty structures and participate in decision-making at a local level. On the public bodies side, the project proposes a system both to inform and evaluate urban planning and policies at a European level -supplying a common ground of knowledge that can be exchanged and compared between cities. 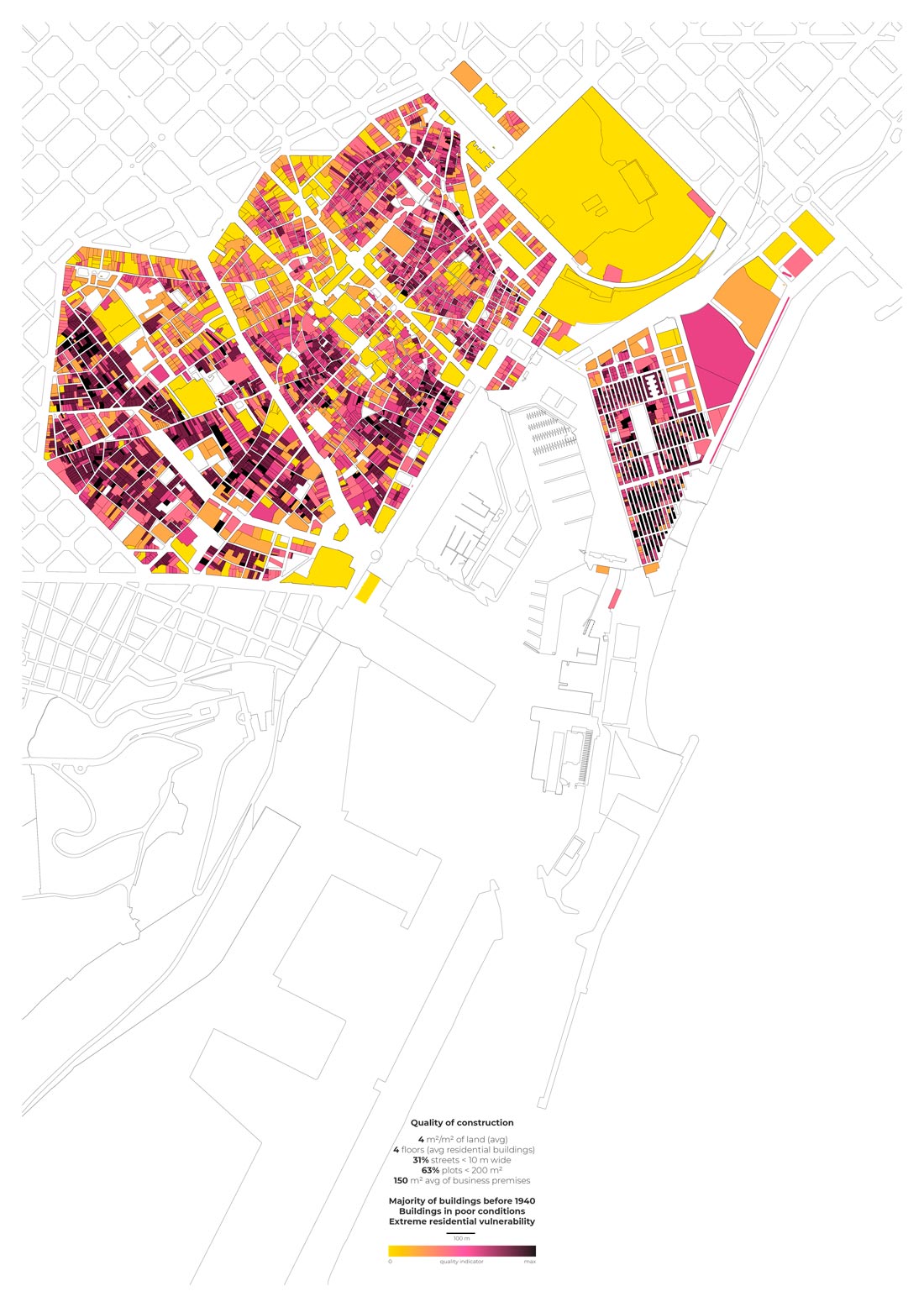 In parallel to the participation process, the proposal phase was based on a predictive model of economic activities aimed at measuring and anticipating different urban impacts like noise, police complaints and social vulnerability, that led us develop a master plan with a strong parametric and dynamic component. Prior to the final approval, we have created a software to simulate different scenarios according to the regulatory parameters and set the limit value in accordance to the plan objectives. 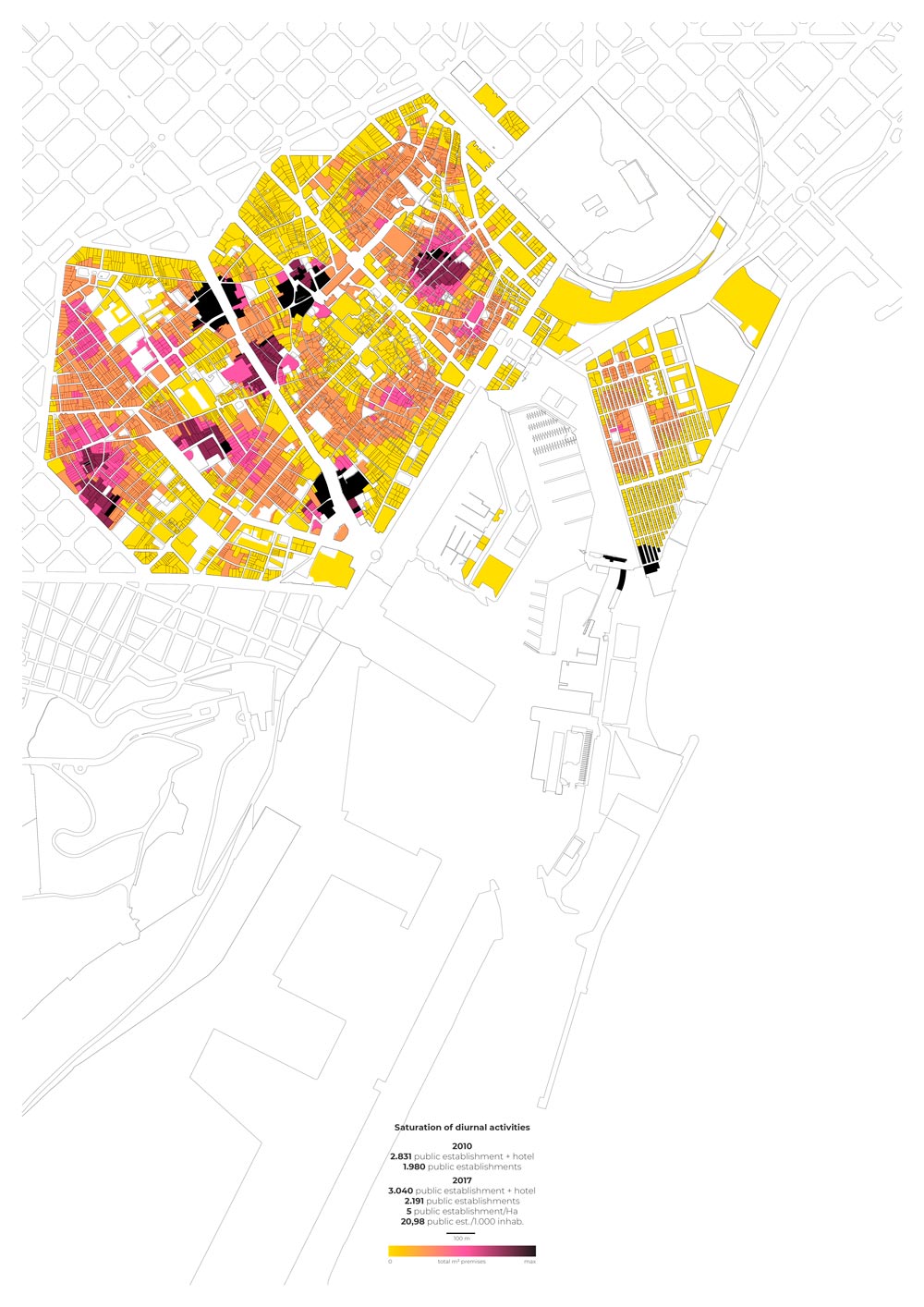 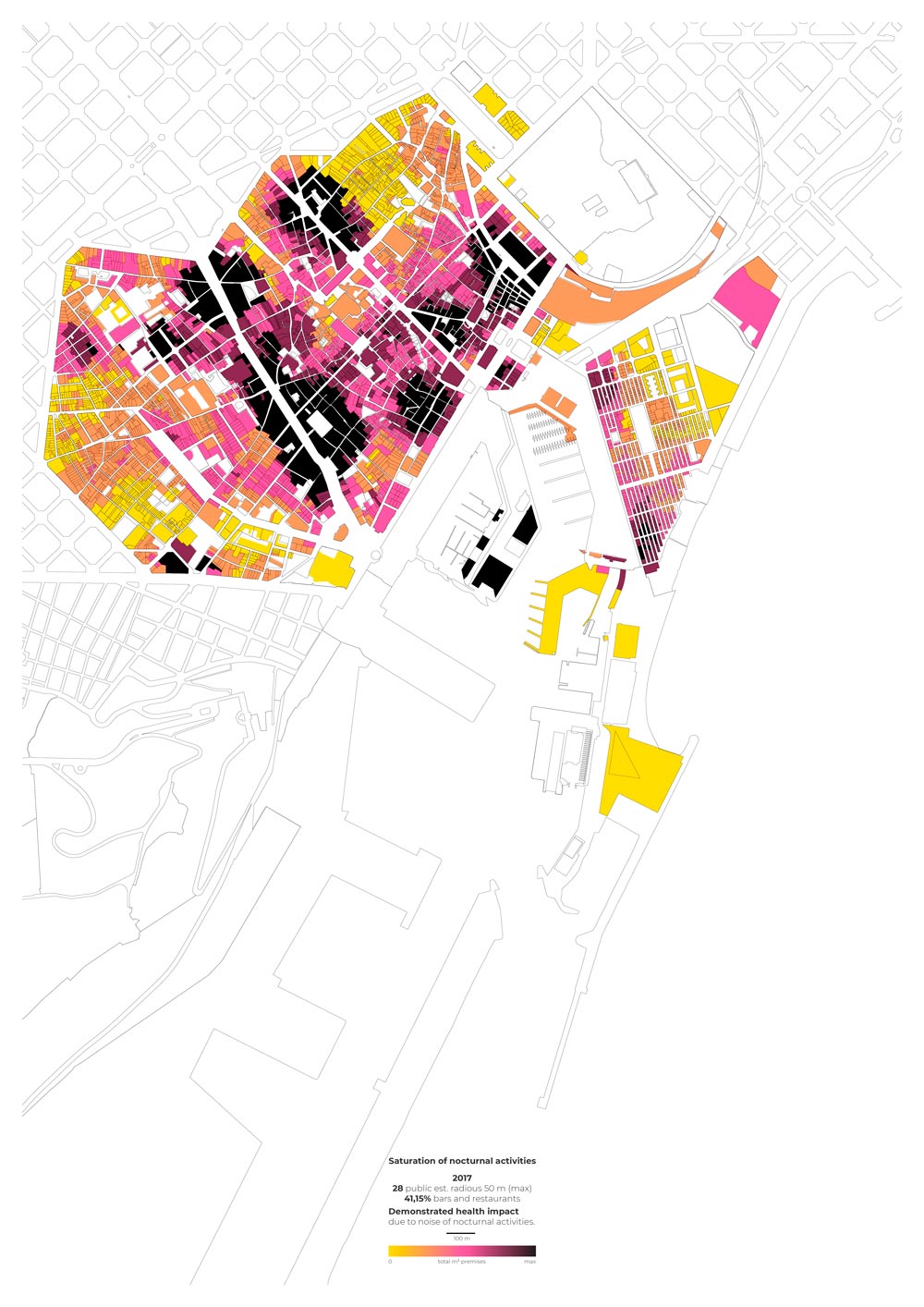 The plan was initially approved in September 2017, following a period of public information that lead, after incorporating the feedback from different actors, to the final approval in February 2018. Today, the plan has been in force for almost a year. The city council is applying the master plan by means of a software, based on the regulatory parametres, that ensures transparency and makes the process of opening a business easier, faster and trustable. 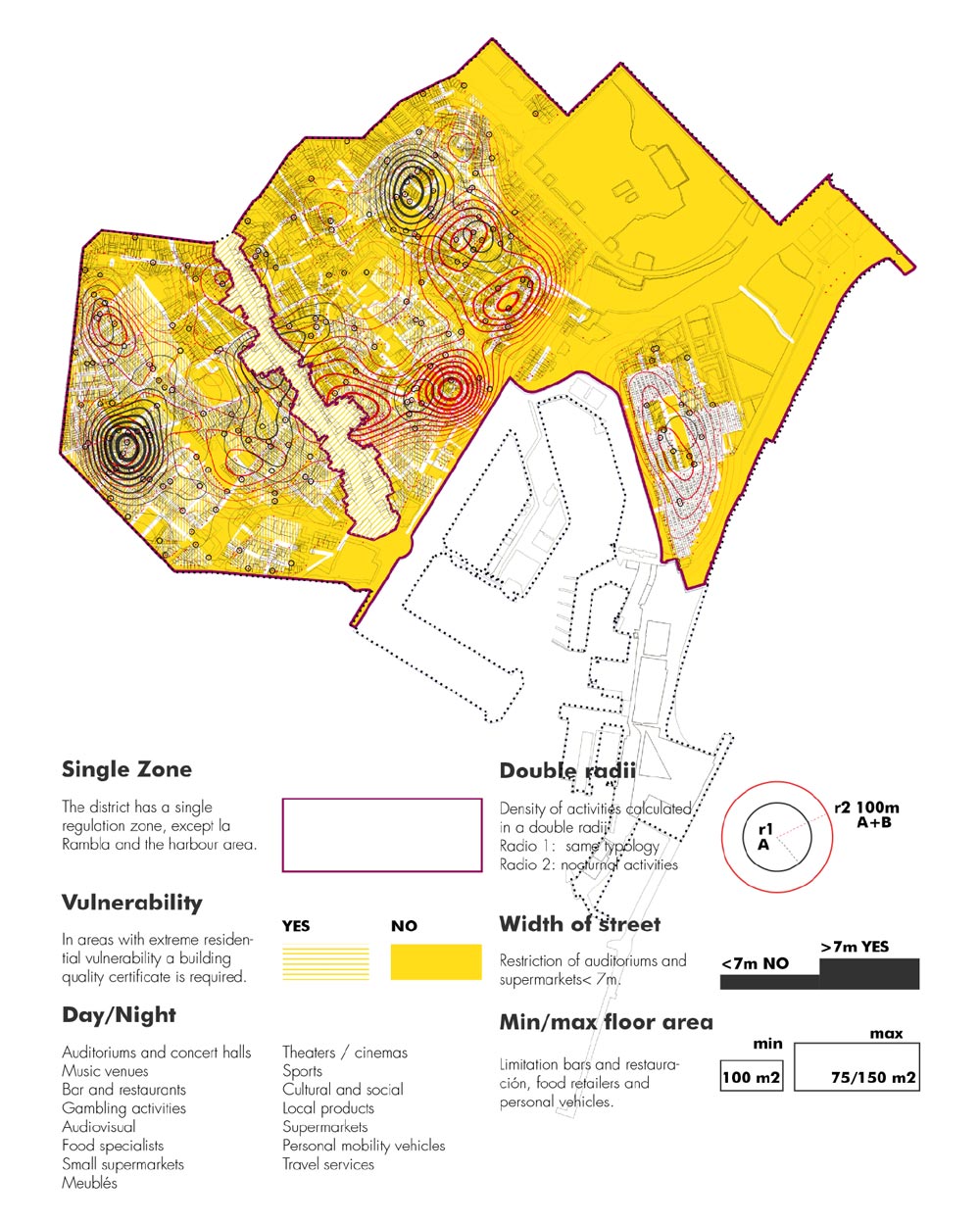 As a result of this two-year process, the project emphasizes the role of urban planning as an instrument to put the city as a common good over the free market. It proposes an innovative contribution by means of a real case study to European urban planning discipline and public policies framework regarding the regulation of economic activity under the Services Directive. In a growing urban world, we must ensure that European cities are capable to ensure the right to the city, i.e, citizens rights to health, work, shelter and leisure but also that urban environments allow citizens to reach a full life in harmony with economic activity.