Or how to generate a luminescent shadow.

Is it possible to imagine a shadow that generates light? Can we reverse the usual relationship between light and shadow, to make a luminescent shadow?

We use the word ‘shadow’ to refer to the relative darkness caused by the interception of rays of light, the area of space which, because it is behind an opaque body lit by a light source, is totally or partially devoid of light. The effective cross-section of a shadow is a two-dimensional silhouette or an inverted projection of the object blocking the light. But what if the object casting the shadow is also a light source with the exact same form and dimensions as the projection of the beam of light that is illuminating it. Can the object generate light and shadow at the same time?

To explore these paradoxical questions, we propose a dynamic conversation between a beam of light and a circumference that emits its own light. In a passionate duel, they compete to erase the boundaries between light and shadow.

The choreography between them, associated with a sound landscape derived from the noises they make, results in a subtle and shifting experience, where the usual roles of light and shadow are dissolved in a continuous dance. 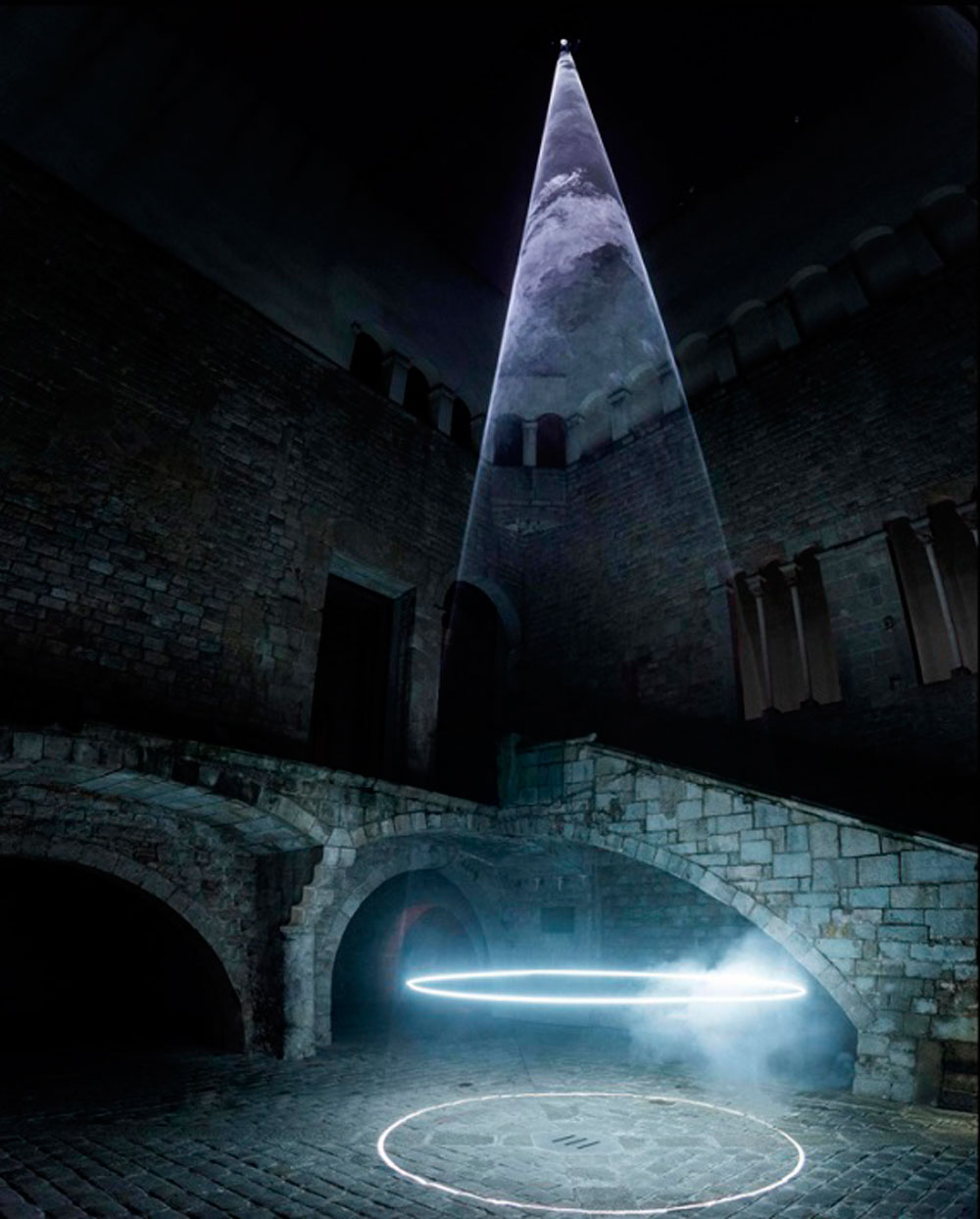 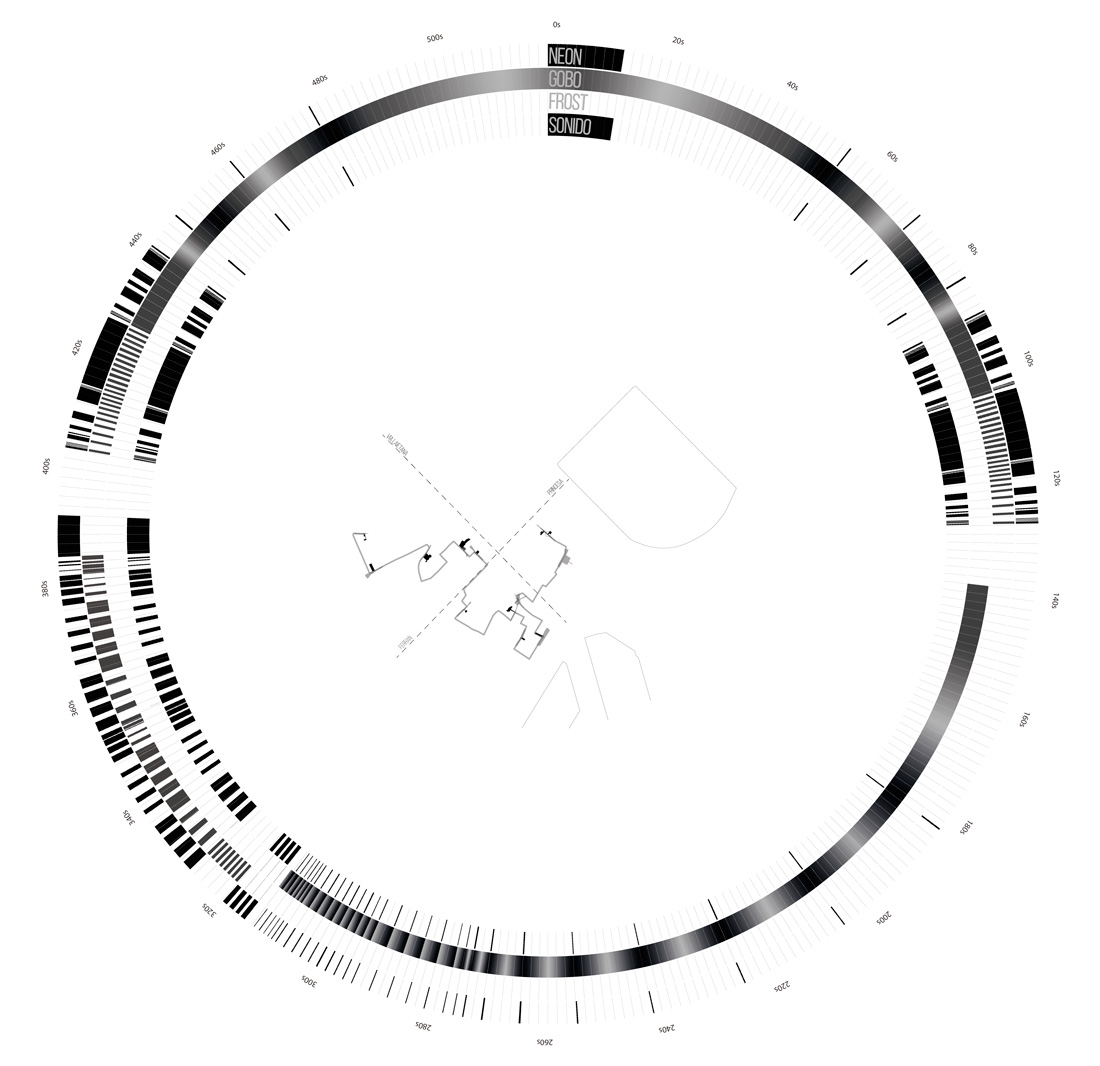 The physical space we occupy today was once a marshland, typical for areas near the outlets of rivers: in our case, the Besòs River. Place names like Llacuna [swamp] or Joncar [reed bed] remind us of Poblenou’s origins as a marshland, which inspired the concept for our design.

Based on an exploration of the inherent possibilities of light, the installation is intended as an homage to the past, using light to recreate the mysterious sensations of a swamp, as it re-emerges temporarily in today’s urban surroundings.

Amid the modern office buildings and refurbished industrial warehouses, our aim is to immerse active visitors into a plane of light that evokes a primordial swamp. The desired effect is to erase the urbanized ground, creating a misty humid feeling characteristic of the swampland underneath. The focus of the installation is on the visitors; as they sink into the horizontal plane of light – like the stagnant waters of a swamp – it creates movement that transforms everyone’s sensory experience of the space. They generate shadows, which encourages other visitors to wade into the plane of light and discover the ambience of the swamplands, the origins of Barcelona’s district of Poblenou. 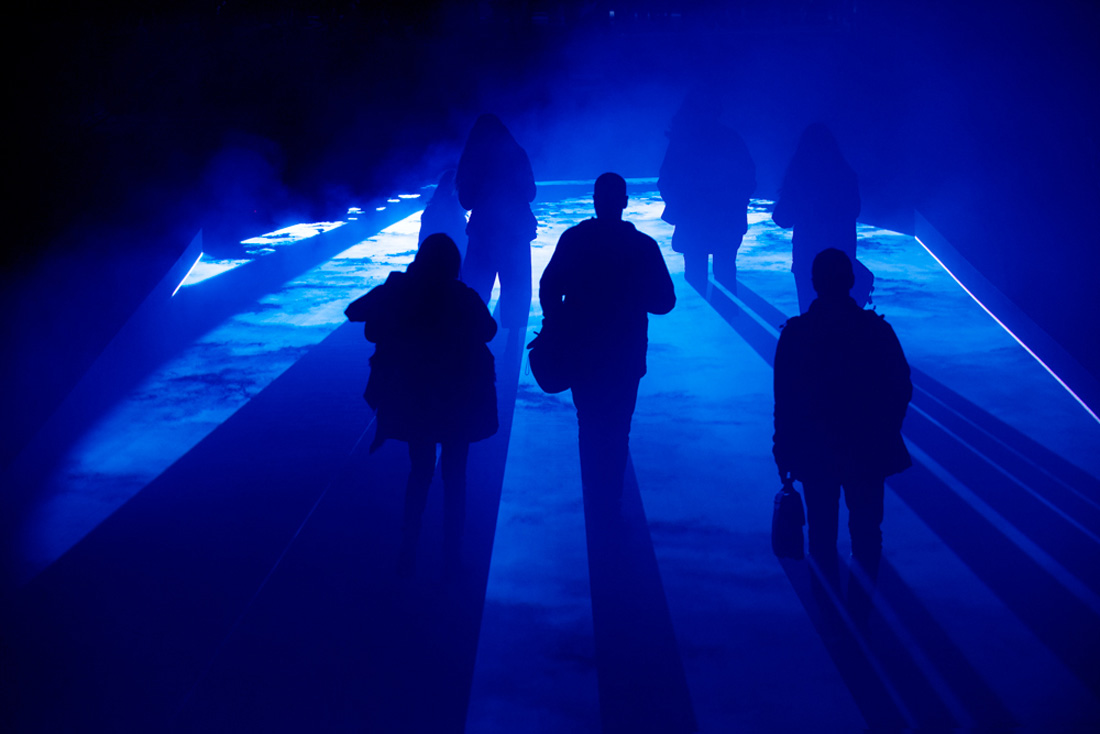 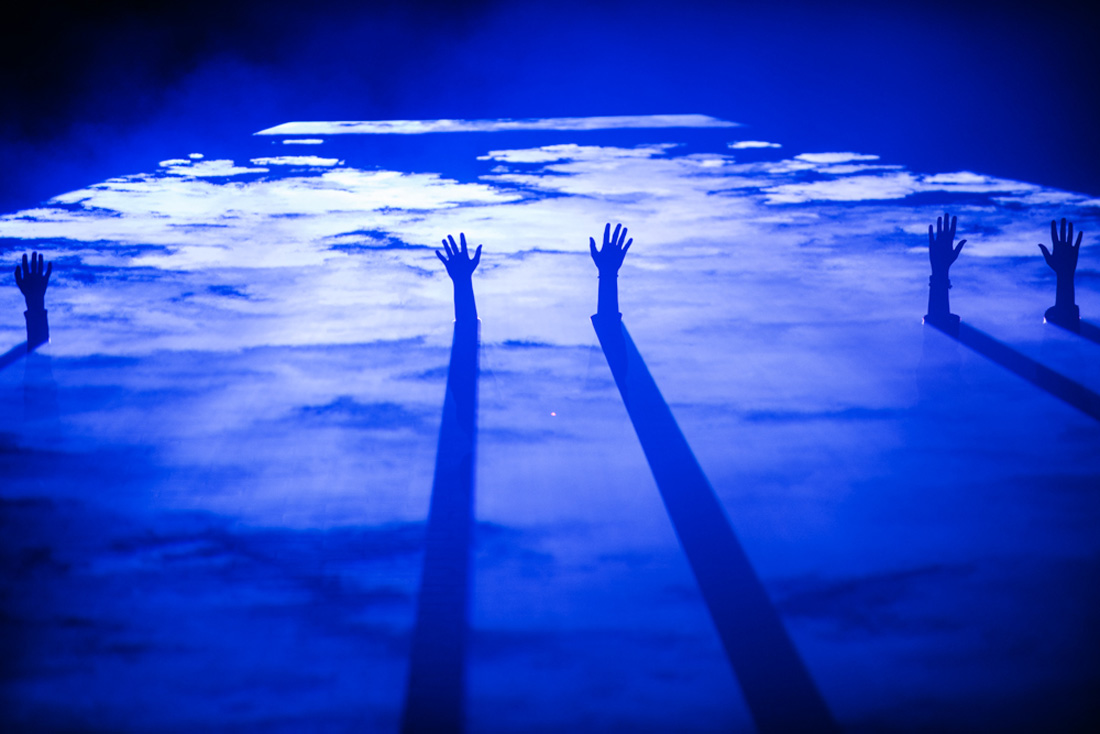 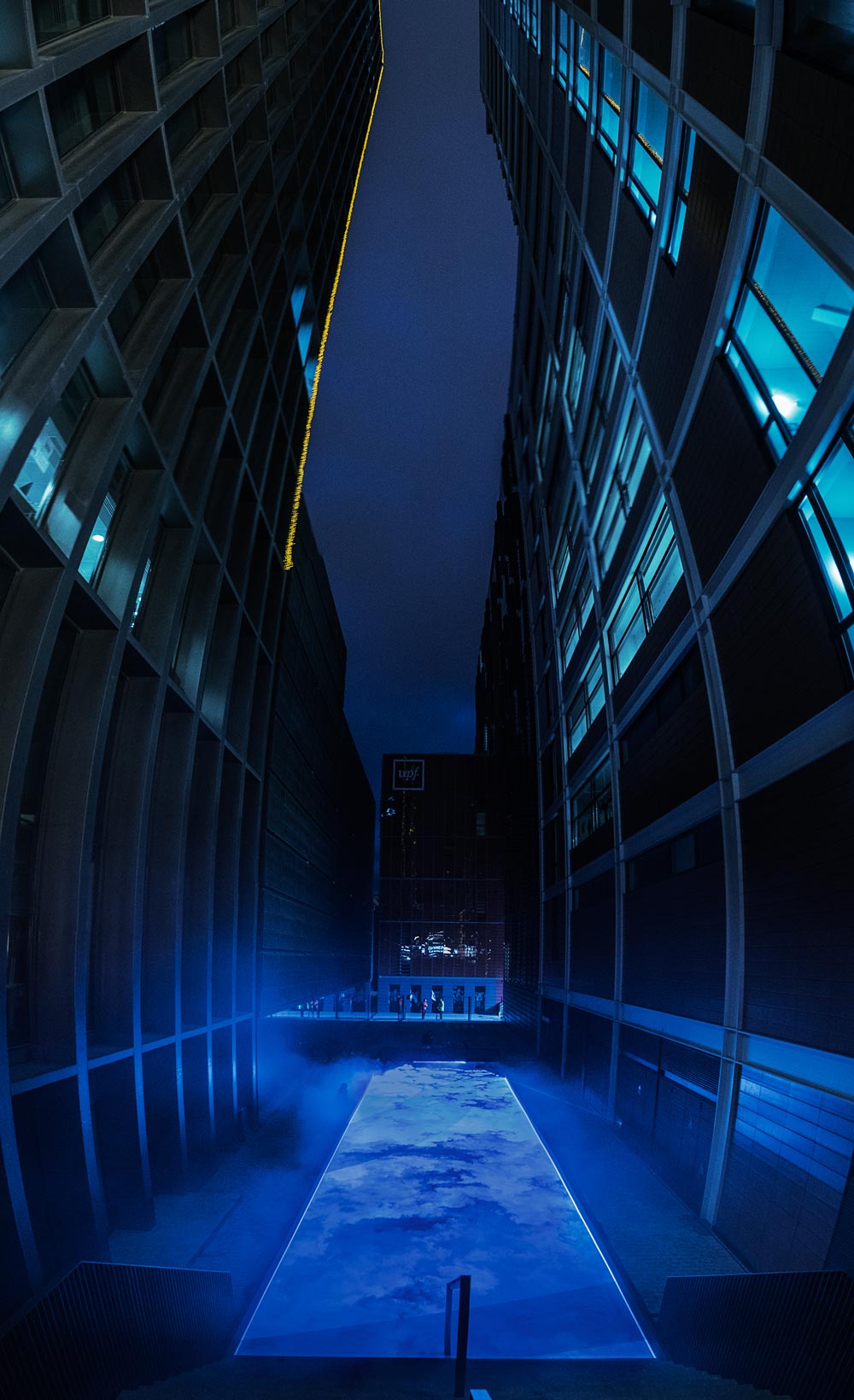 The 22@ district in Poblenou, where the LlumBCN festival takes place, was designed as a neighbourhood for innovation, technology and business development; in other words, it is a symbol of modernity. However, the excessive immersion in technology suggests that its elements, both the scale and the patterns that define it, are more designed for technology than for users.

Pedestrians, circulating at ground level, are overwhelmed by the size of the surrounding buildings. They feel lost and disoriented, in an architectural maze that compounds the frantic pace of life in large urban centres, where it seems like there is no time for anything.

The site assigned to Elisava is a pedestrian area, surrounded by disconnected elements that create a confusing composition: apartment blocks for senior citizens; a monumental and intimidating hotel; the Agbar Tower, located less than 100 meters away, with its own light interference; an outdoor gym in the middle of the site; the entrance to a parking area, with its ventilation outlets; green areas that don’t mesh with the surroundings; and a lighting system scattered randomly throughout the area.

Alice can be a refuge for pedestrians, where they can feel protected from this oppressive reality. It can become an invisible rabbit hole, and they can chase the white rabbit into the unknown, where time doesn’t matter and routines don’t exist.

Alice is the reflection of an illusion. 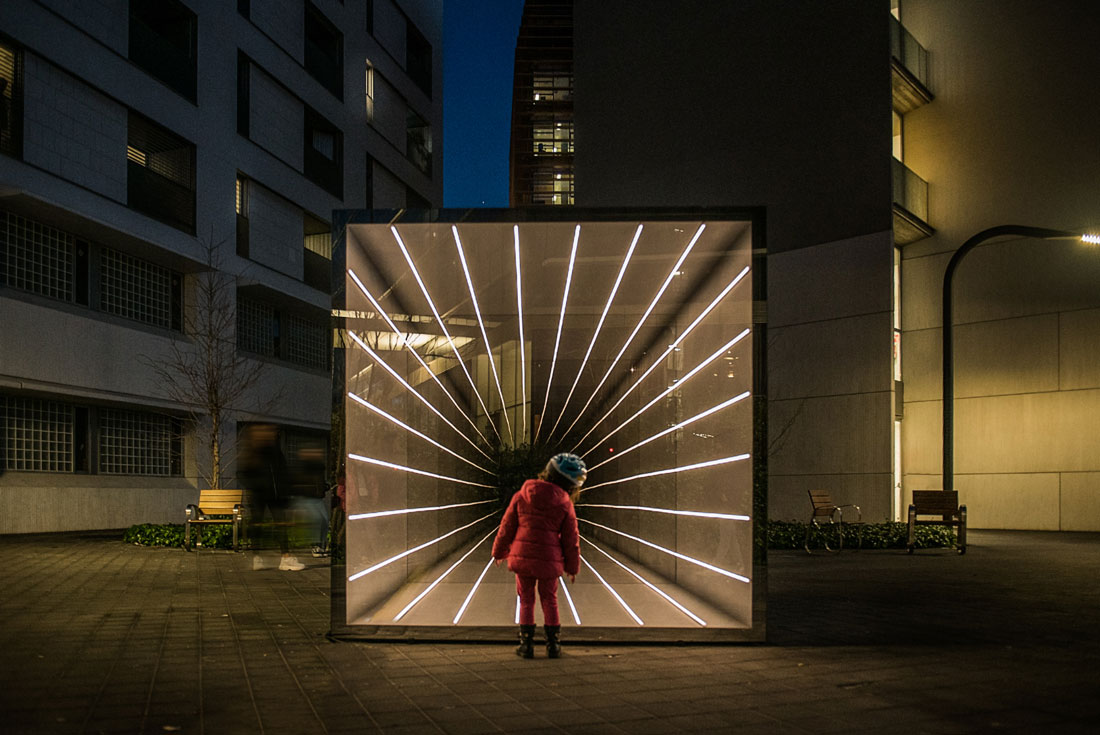 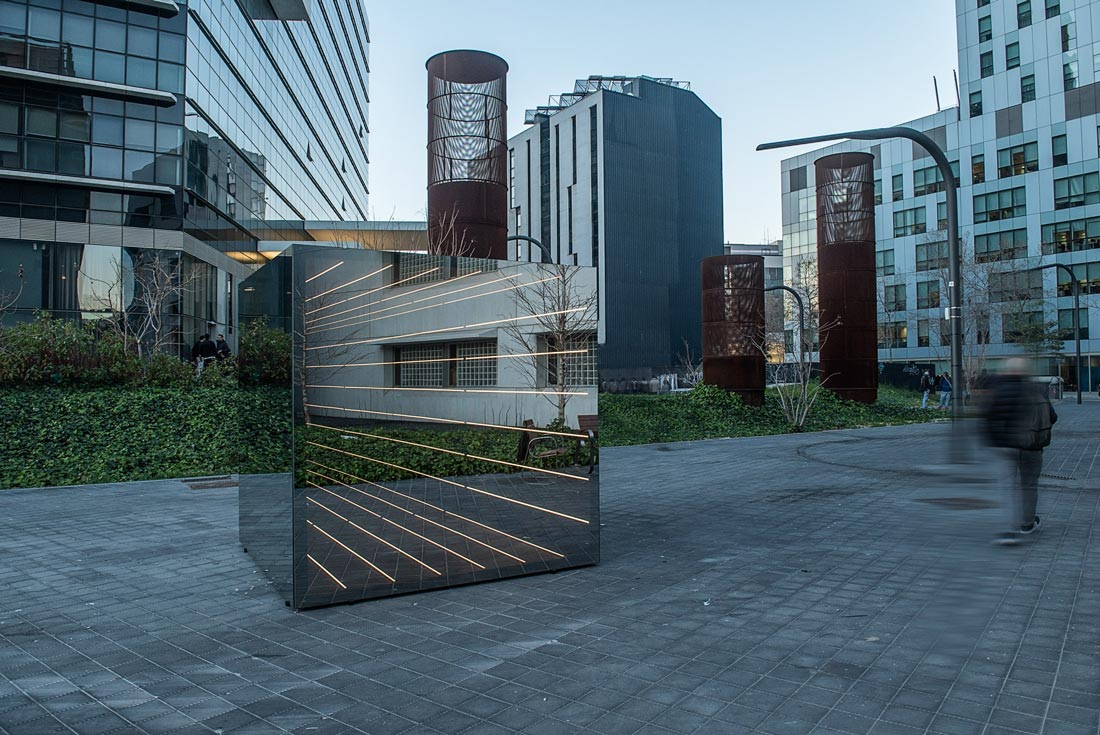 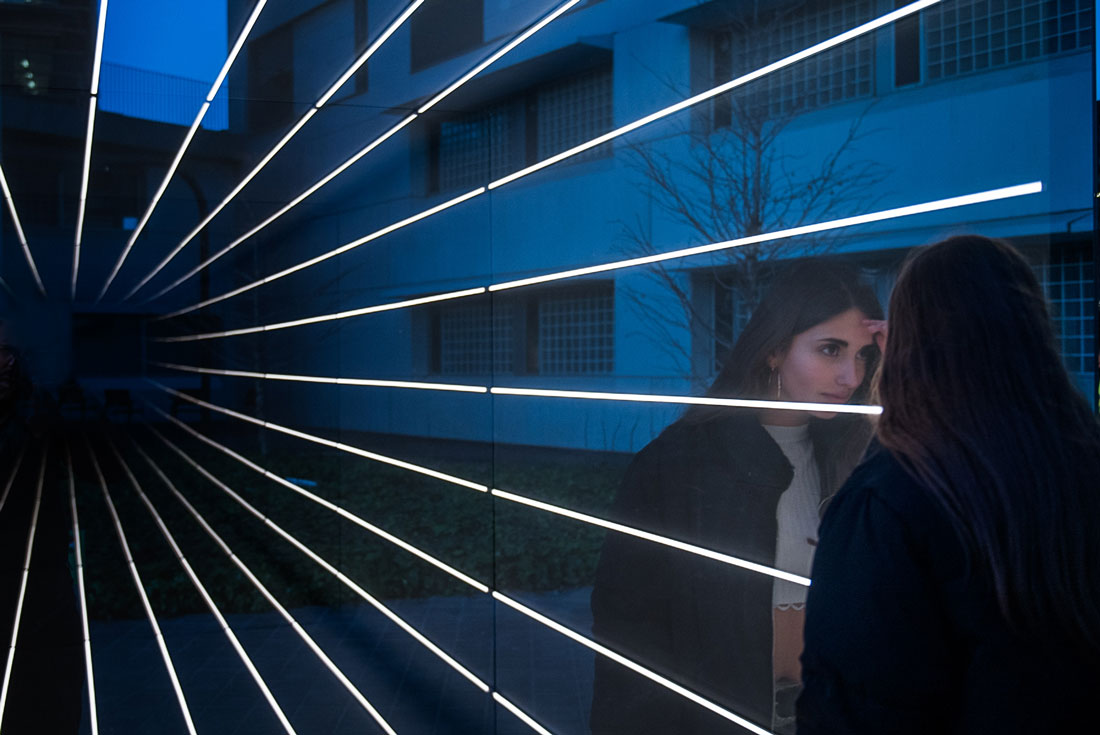 This installation is the response to a commission for the design of the Christmas lighting for La Pedrera, one of Antoni Gaudí’s most important and popular buildings. The proposal draws from an intensive study of the building: its architecture, its history, and how it fits into contemporary Barcelona. The study helped us to qualify and quantify the enormous visibility of the main façade, both locally and globally. Every day, tens of thousands of people walk past it, and thousands of visitors take photographs, which they share on their social networks.

The façade of La Pedrera is, in fact, a global screen, probably the most viewed in all of Barcelona.

On the other hand, La Pedrera is located at the heart of Passeig de Gràcia, where the city’s luxury stores are all concentrated.

We took these two conditions as an opportunity to generate a debate, by harnessing the global screen of the façade, focused on the contradictions of the Christmas holidays in a capitalist society like ours.

The overlay on the curves of the façade of neon words that represent the traditional values ​​of Christmas, interspersed with the command “BUY”, lights a spark for debate that is broadcast daily, spontaneously, across the planet via the internet. 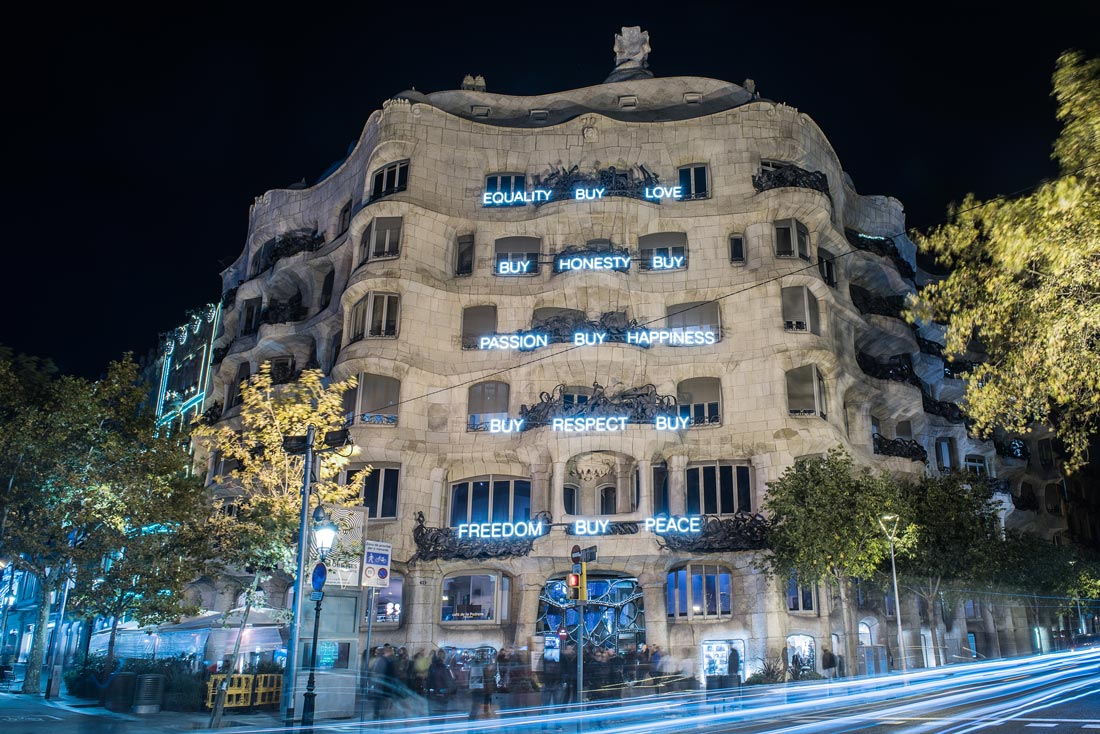 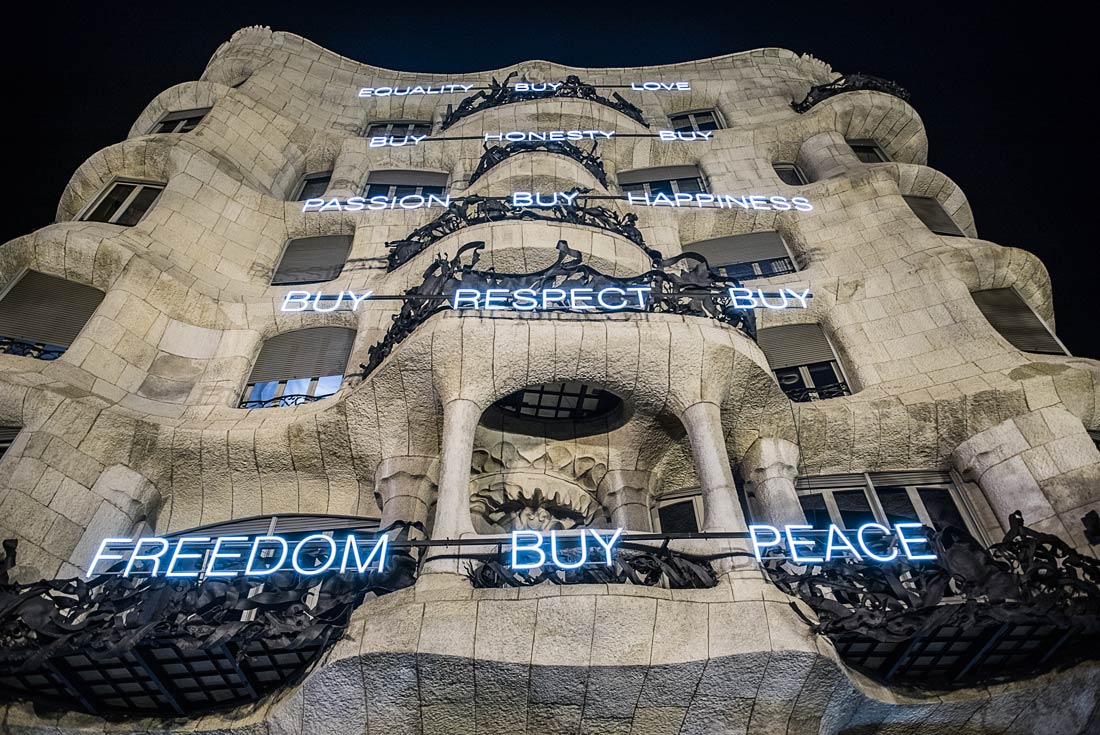 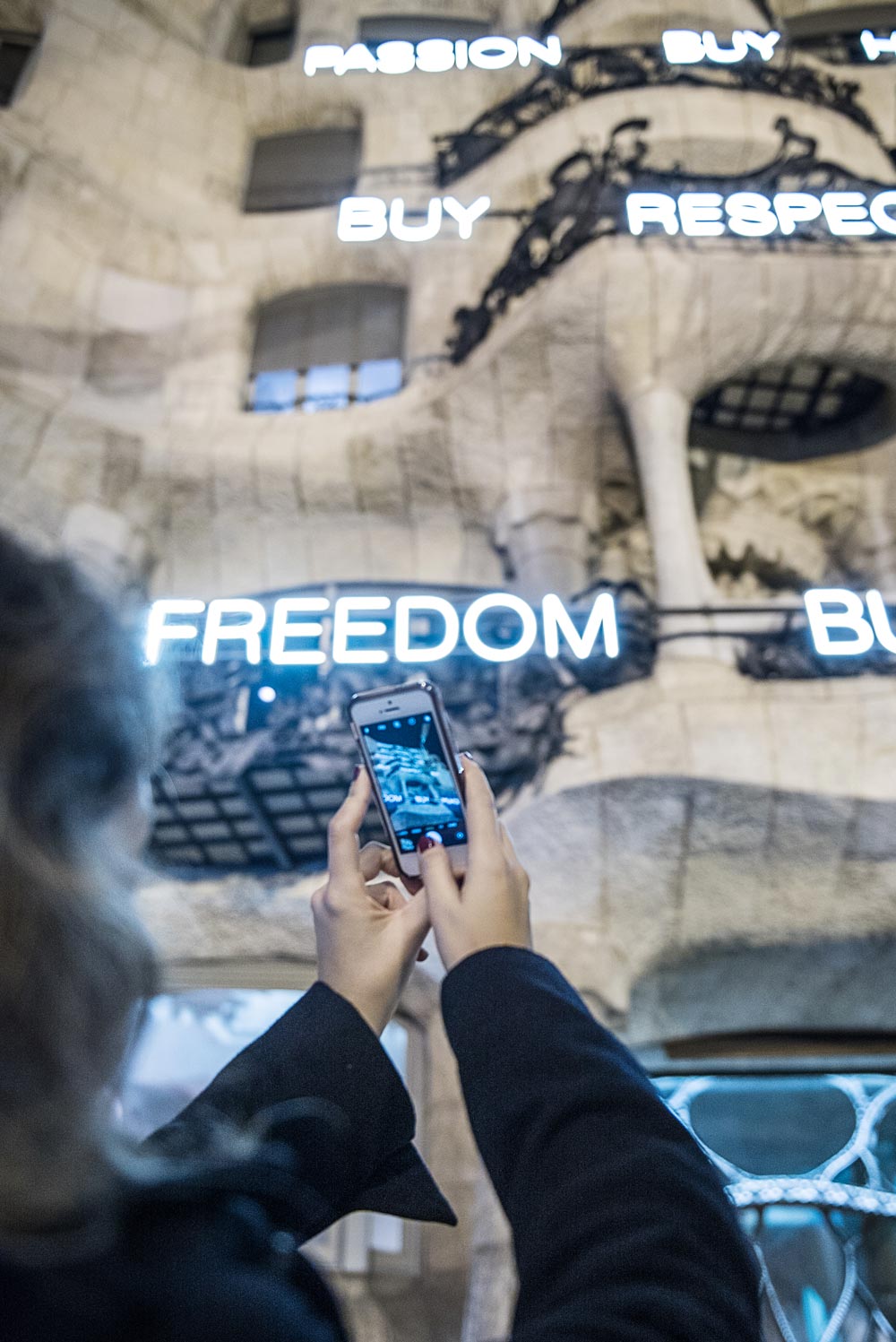 In the context of the Vibra Festival, held in Girona, Elisava and Playmodes propose an interactive participatory experience which situates users as the main participants in the installation. At the same time, it generates a reflection on the concept of “protagonism” in the digital era. From a sociological perspective, human beings are constantly pursuing the spotlight, but what happens when the spotlight pursues us?

Human behaviour is altered when we know we are being observed: stage fright and the desire for attention is the duality put into play on the stage of this art piece. Chased plays with the fear of making a fool of ourselves, which coexists with the longing for praise and recognition.

The installation alters the order of everyday life by transforming public space into a stage. Public lighting leaves behind its role as common element of public space to become a means of interaction, which makes people into the centre of attention.

The streetlights in the Central Park serve as the drivers of the piece, and people’s behaviour and reactions to them bring the work to life and round out the installation’s significance. 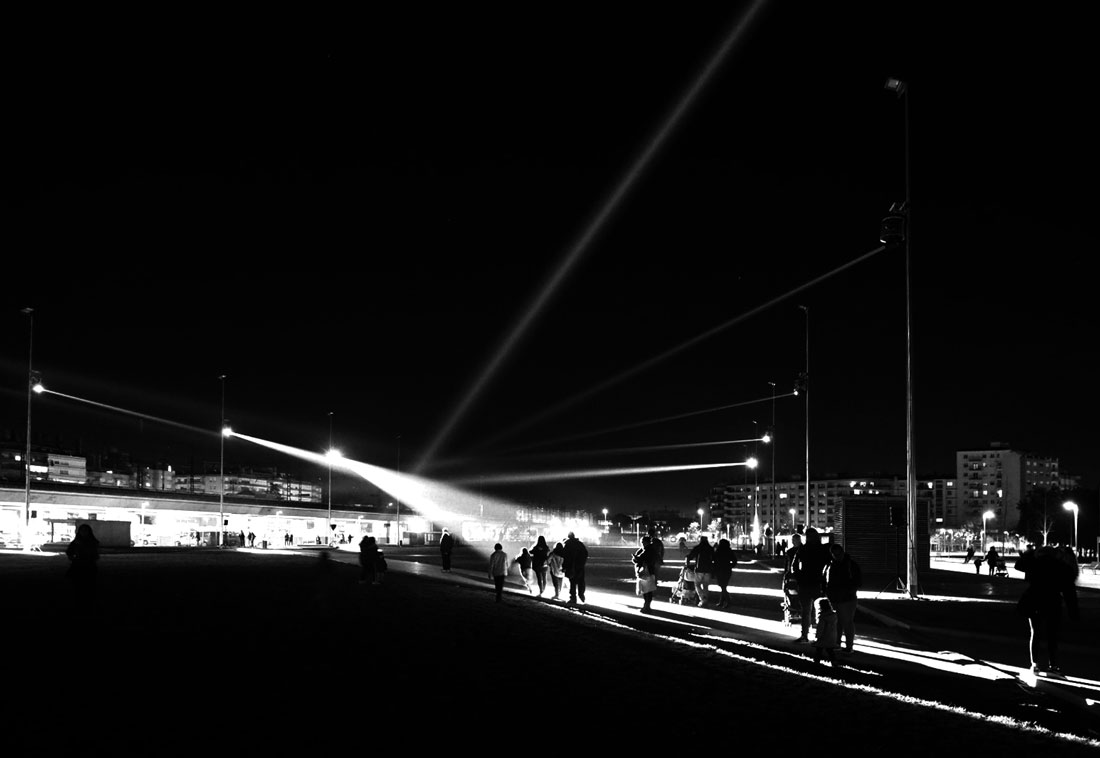 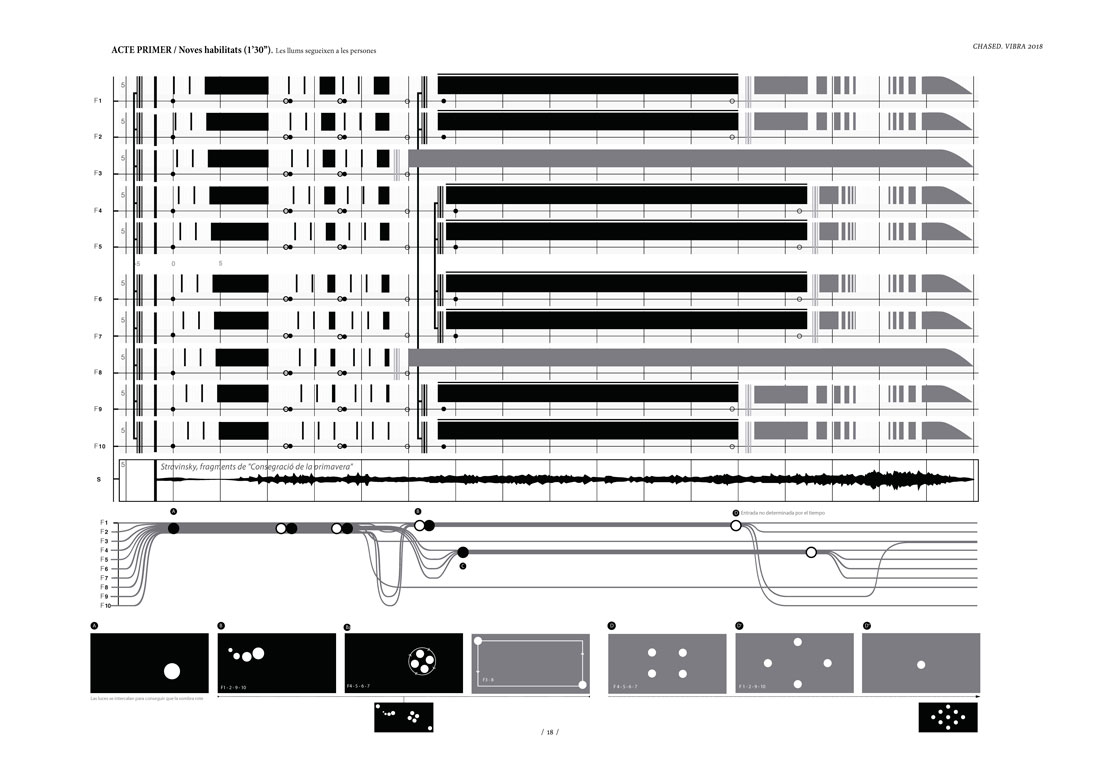 « The Stairs to Kriterion: An Impressive Landmark
A Place of Dialogue »