Building without Bias: An Architectural Language for the Post-Binary

Technology is not neutral. We’re inside of what we make, and it’s inside of us. We’re living in a world of connections – and it matters which ones get made and unmade.

Man is to Computer Programmer what Woman is to Homemaker.

The most appropriate pronoun for the word Vulnerable is She whilst Intelligent is better suited to He.

All domestic or administrative AI should be female.

These gendered prescriptions are the result of a machine logic—a logic that indiscriminately infers truths from data; a logic that thus uncovers and embeds problematic prejudices at the heart of contemporary society.

As automated technology finds its way into our bodies, buildings, and cities, it is essential that it be designed in a way that is free from insidious biases. However, in the case of gender, this is rarely the case. Instead, the artificially intelligent tools that we use on a daily basis amplify and sediment existing gender inequalities. For example, Google translates non-gendered language to a gendered one by assigning male pronouns to words such as intelligent, successful and ambitious but female pronouns to the words emotional, vulnerable and sweet.

Building Without Bias seeks to discover whether architecture can be used as a tool to reveal, rethink, and revise the biases that are embedded within technology and society.

The design methodology is based on a machine learning technique known as word embedding. The method teaches language by giving machines numerous texts, such as Google News articles. The machine processes them and creates links between words, which result from the way in which they are associated with one another. The machine learns, for example, that kitchen has a stronger relationship with the word she than he because it is more frequently found with the female pronoun in sentences.

Using this technique, the project first defines a series of 0 GU (Zero Gender Units) architectural components. In the eyes of the contemporary machine, these components are—as a result of the way that they are labelled seen as neither male nor female.

The website Building Without Bias is created with the aim of reaching a wider audience and allowing others to apply a similar methodology to their practice (http://building-without-bias.co.uk).

This linguistic approach is then developed into a more holistic methodology for designing a post-gender architecture. Commissioned by OMNI (Organisation for More Nuanced Ideas), a series of post-gender interventions are tested in one of London’s least nuanced areas: St James’s. In 2018, St James’s is still a very exclusive area, with many gentlemen’s clubs and gendered businesses. These institutions are visited by white, wealthy men, and their doors are closed to women or to those who do not belong to this elite.

Five OMNI interventions are designed to disrupt the existing situation of St James’. The purpose of these 0 GU spaces, which vary in scale—from the size of a piece furniture to that of an entire building—is to retrain how we use language. Since technology reflects the biases embedded in our language, the first step towards a non-biased machine is a gender equal language. The interventions therefore house five different programs, each representing a different way in which language is used: viewing, speaking, listening, writing and reading. 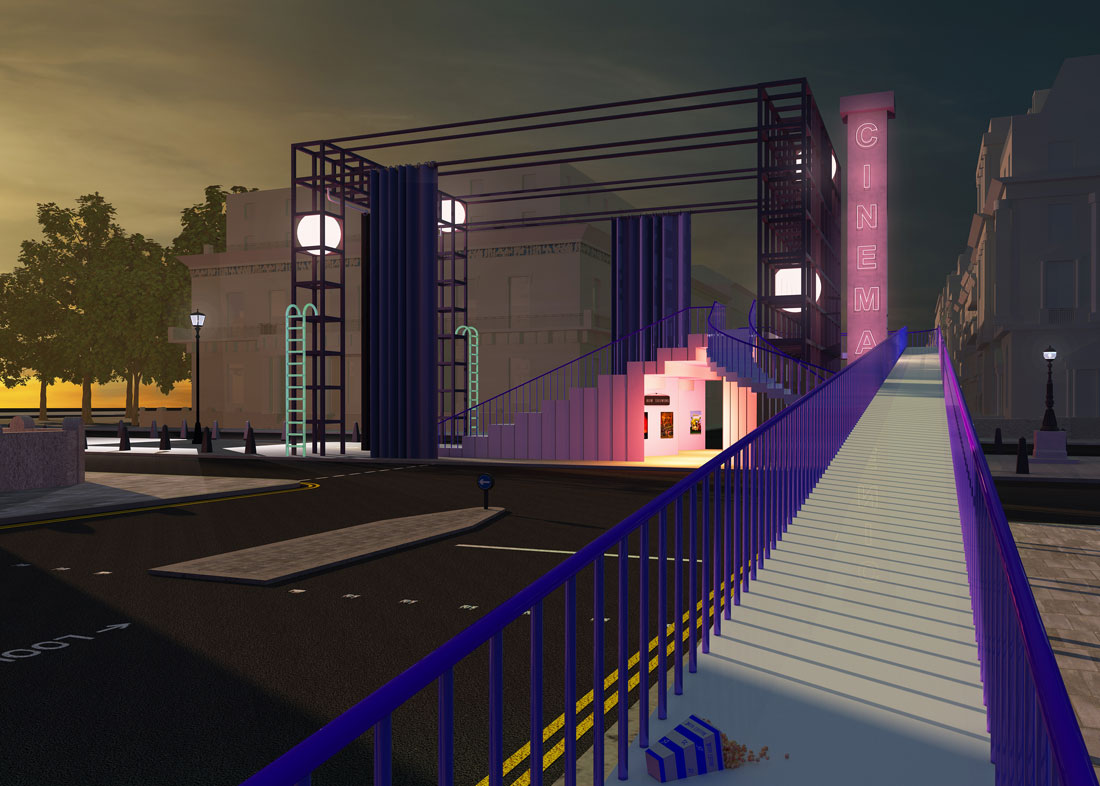 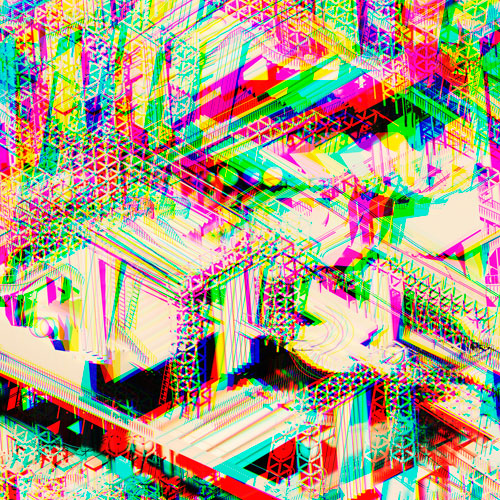 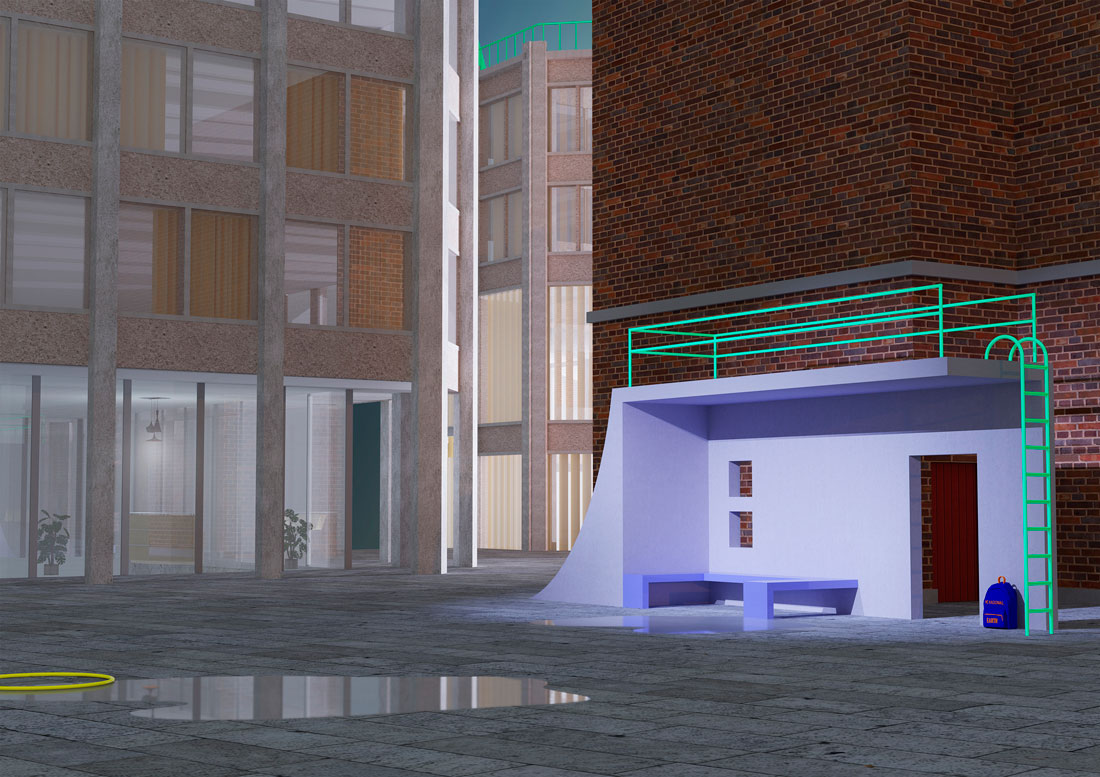 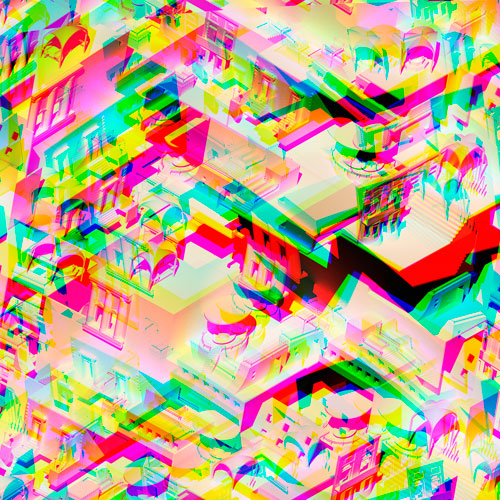 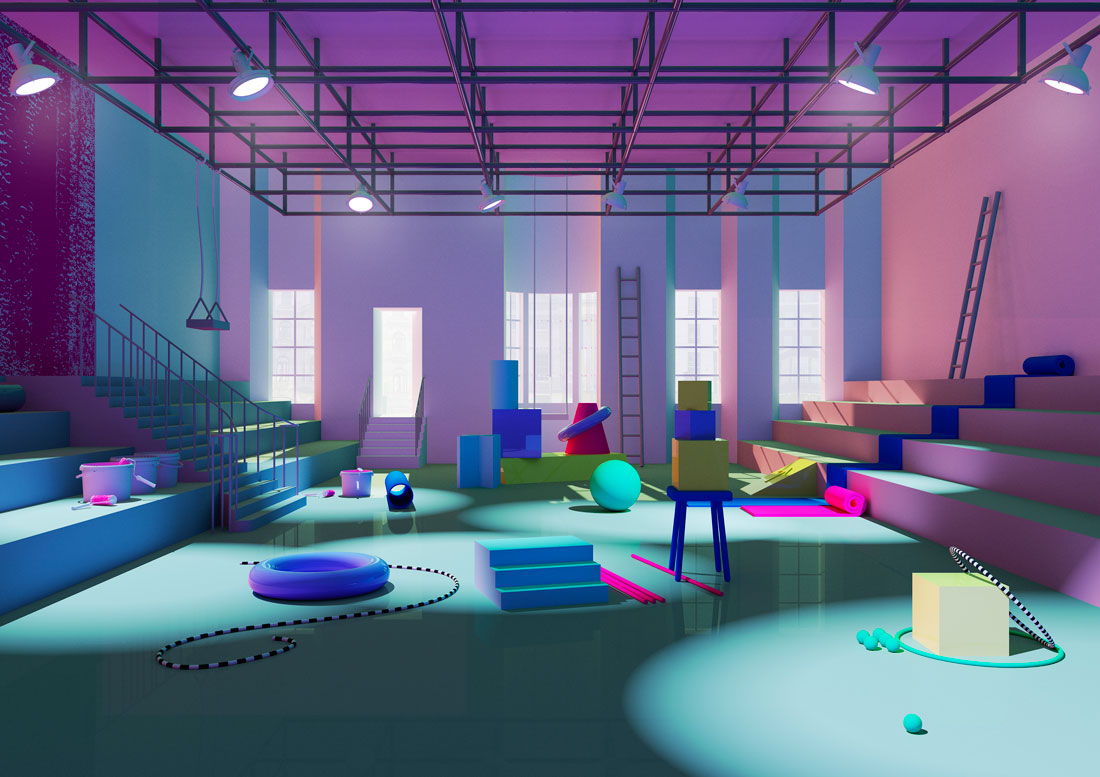 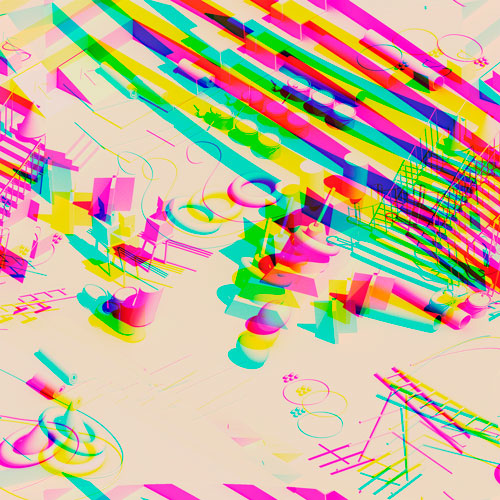 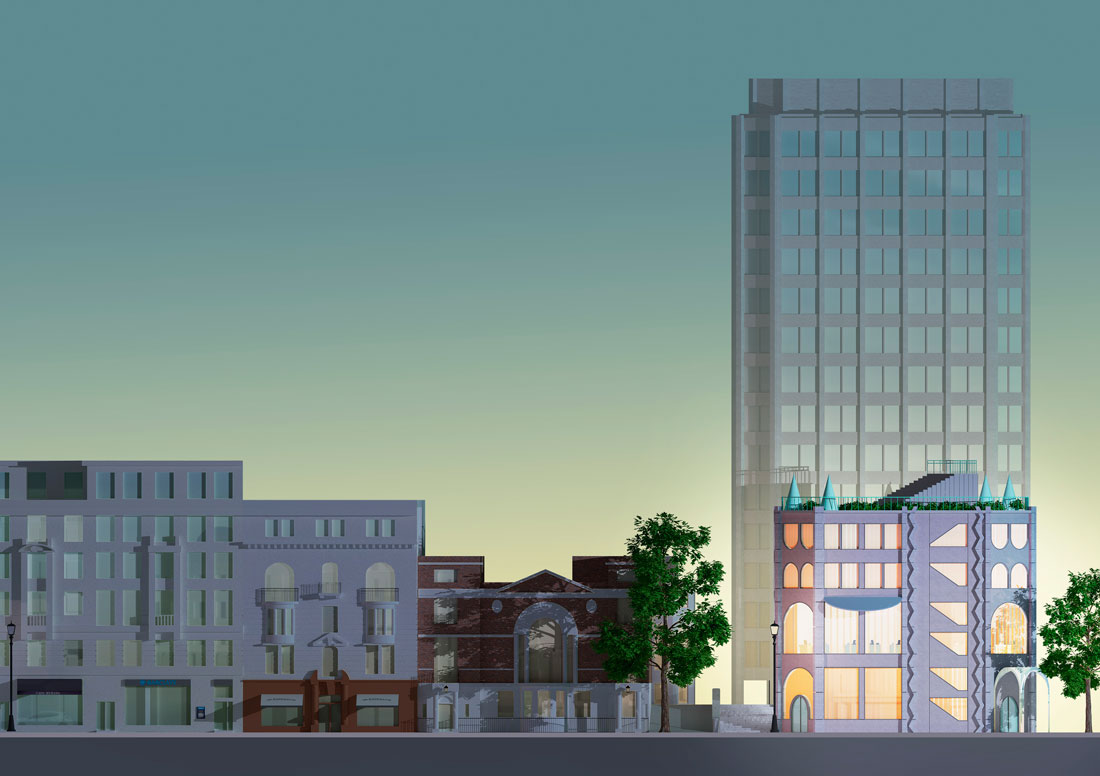 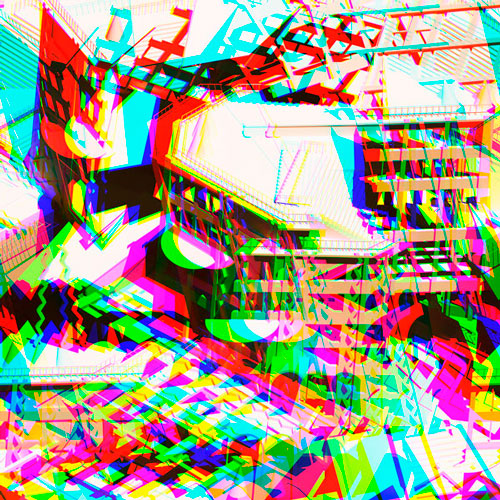 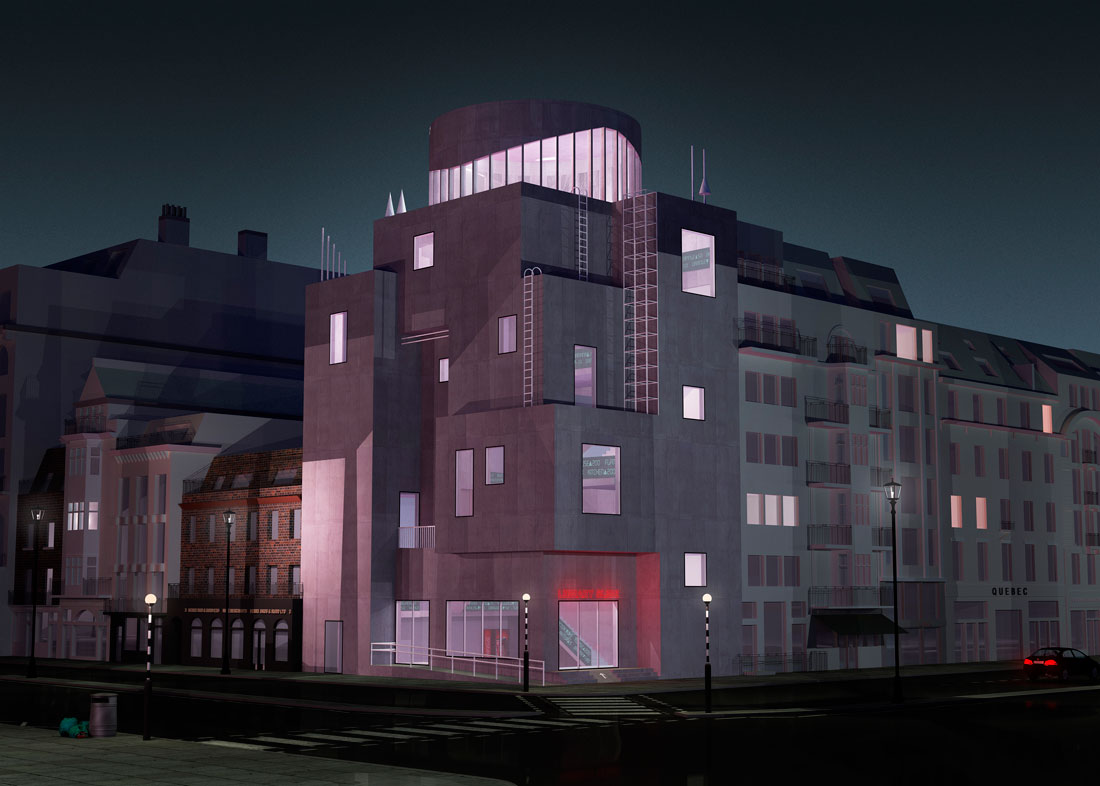 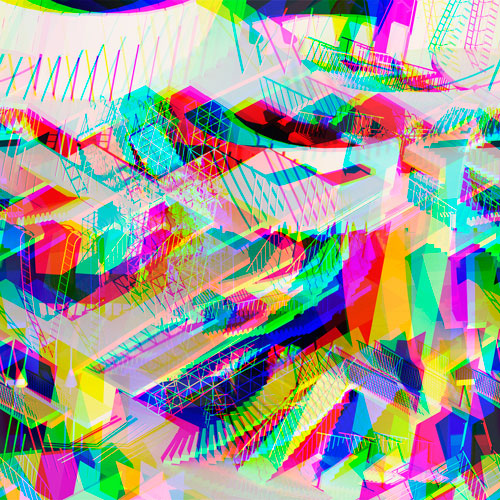 Ultimately, a landscape simulation is designed to maintain an optimally genderless St James’s. The ideal gender neutral masterplan is one in which buildings are no longer individual, exclusive spaces and where the boundaries between programs, forms and genders are merged.

« Mind the (Commuting) Gap and the City
Pomophobia and Feminism: Revisiting the Swedish Postmodern Discourse »