Just north of the polar circle, Danish studio ALL (Atelier Lorentzen Langkilde) has designed a contemporary city hall for the municipality of Bodø, Norway.

The 12,000 m2 City Hall consists of a new building and the transformation and linking of two existing, preserved buildings. The new town hall unites the three buildings into one flexible plan, organized with a circular flow around a spectacular wooden atrium. 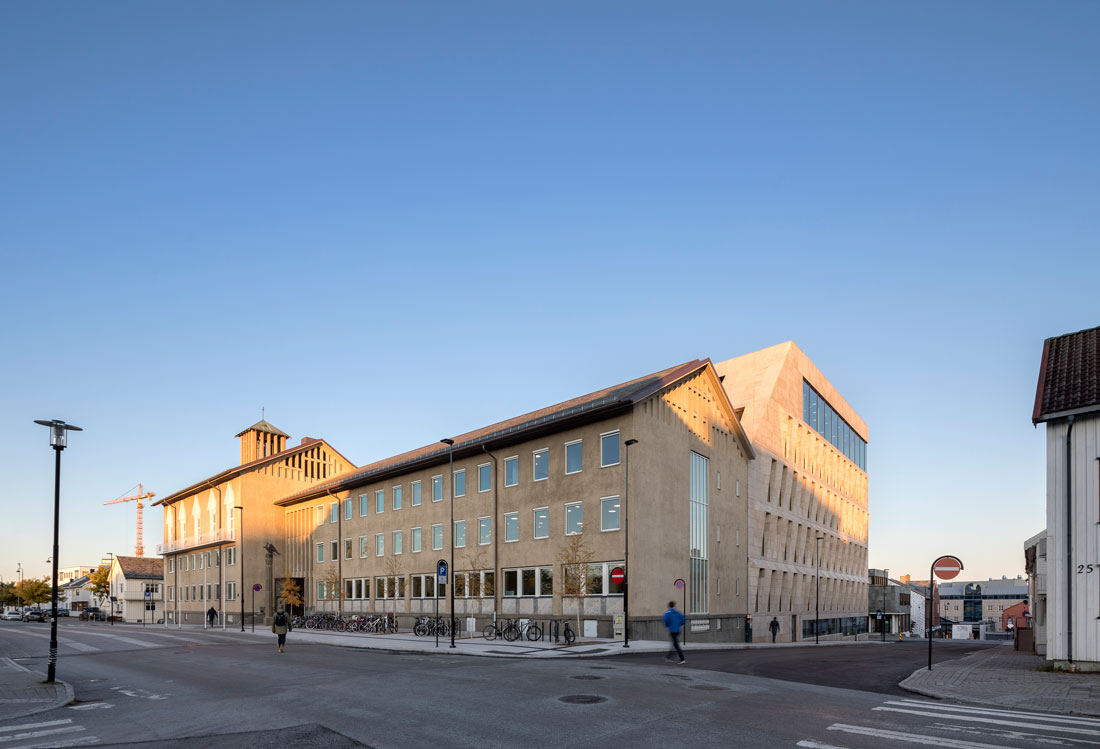 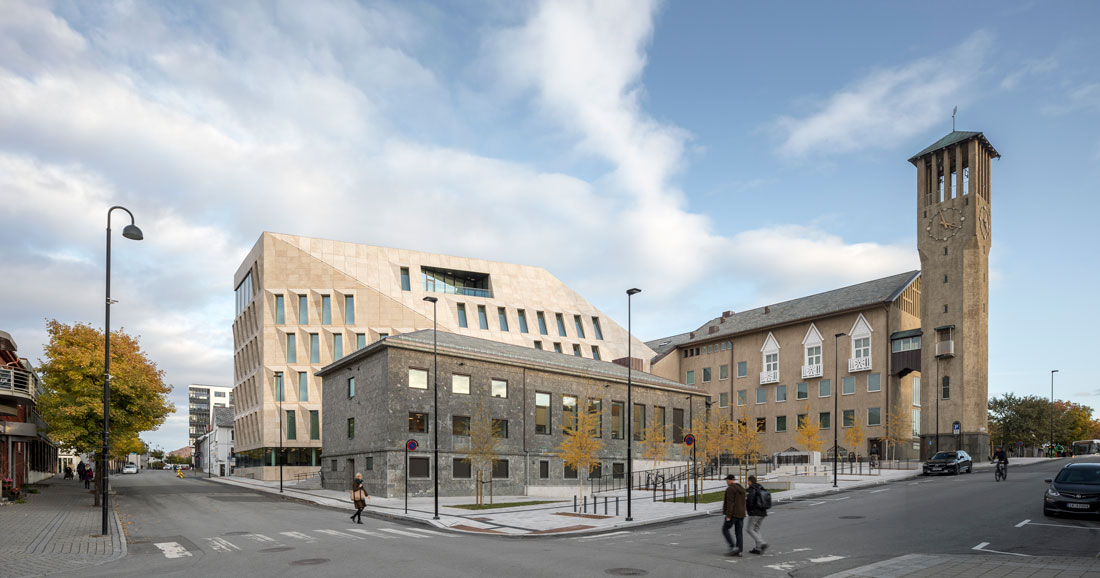 The new city hall is a crystalline stone volume, with façades that slope towards the lower, existing buildings. The angles of the façade are drawn from the existing rooflines. This unique faceted façade geometry catches the dramatic changing light conditions north of the polar circle. 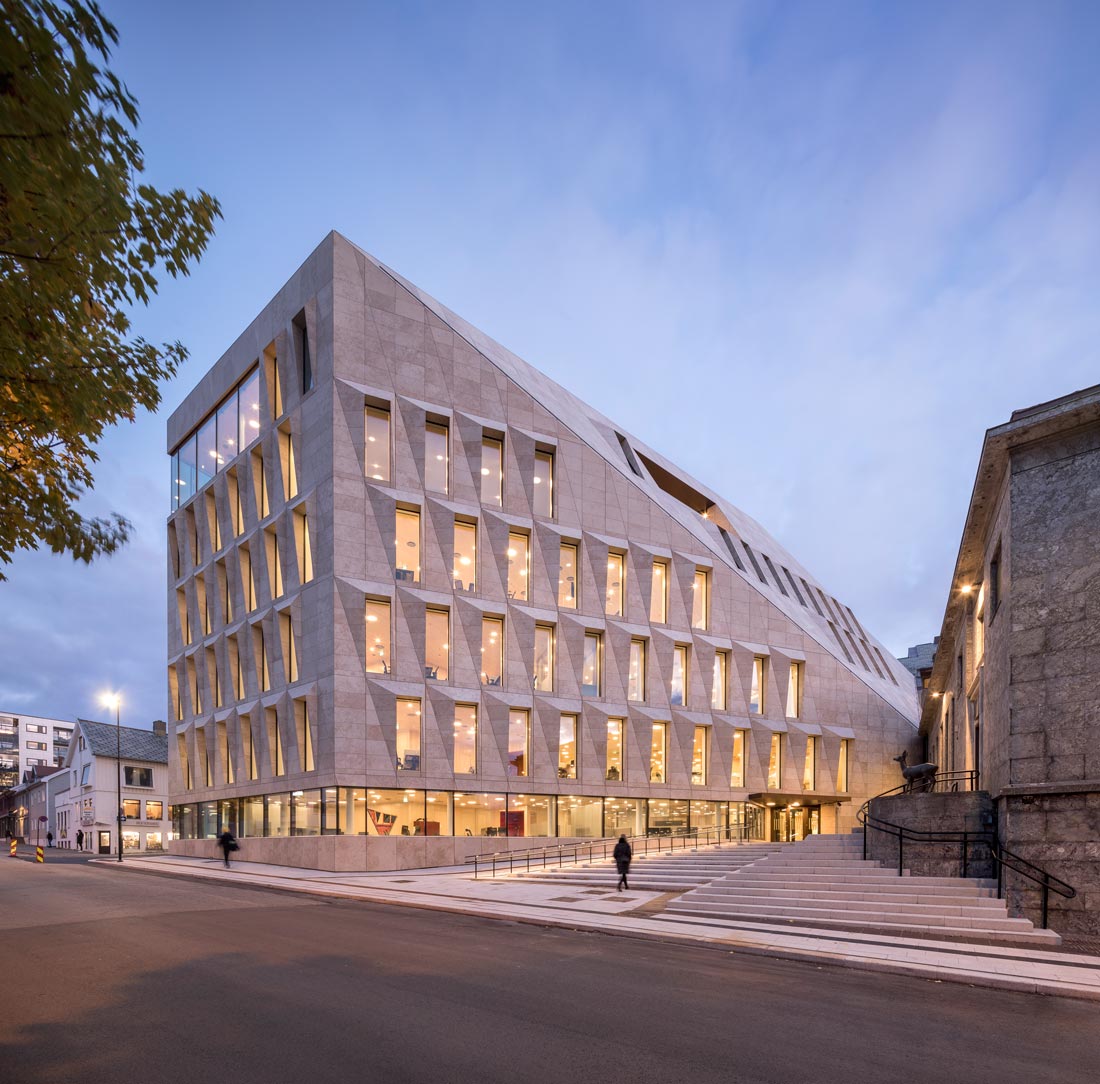 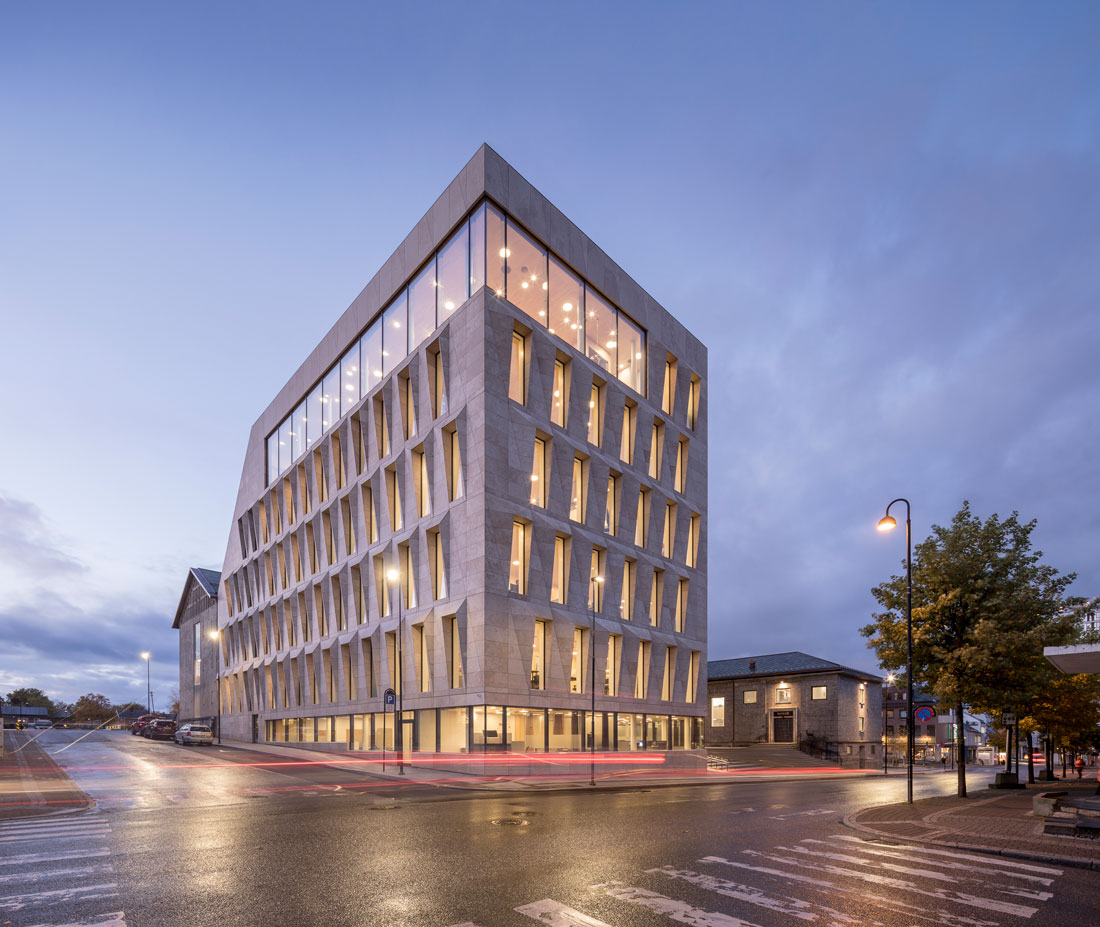 Bodø, Norway is situated on a peninsula north of the polar circle. The city is bounded by mountains and the harsh Norwegian Sea. In the city center, the old city hall has been transformed and extended with a new iconic building into a 12,000-m2 modern workspace for 400 employees. 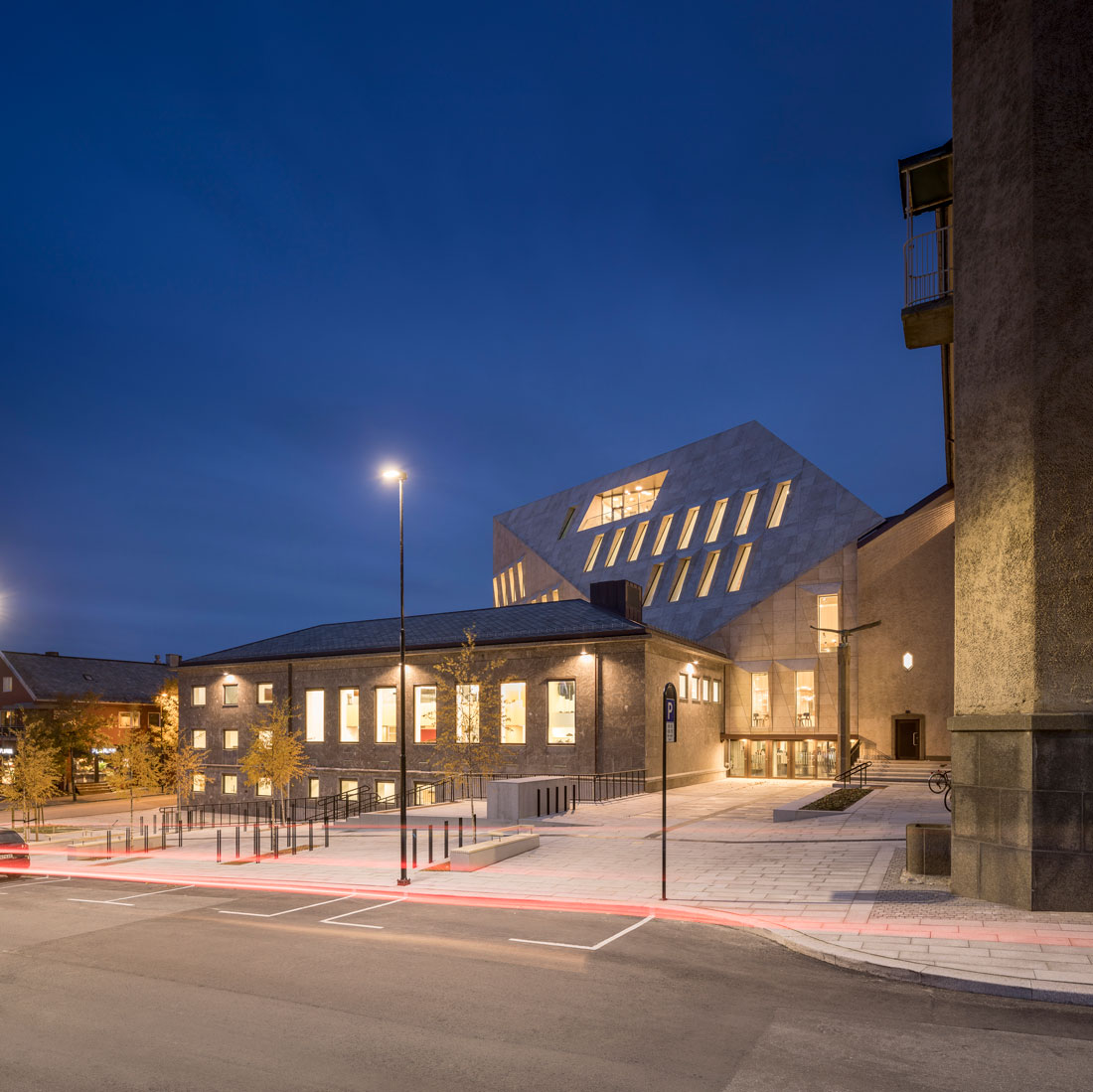 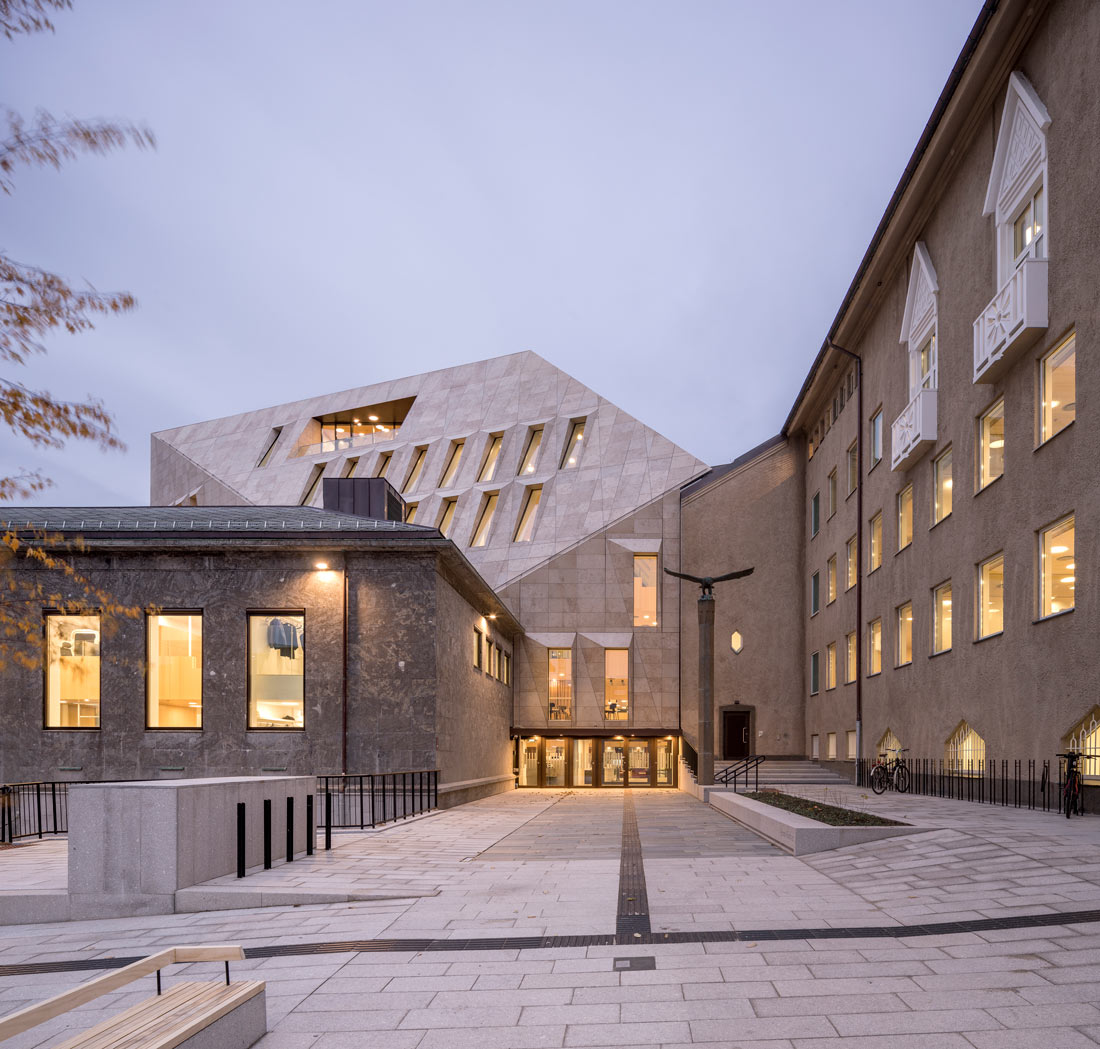 The new building is a keystone linking and transforming the flow of the existing buildings to create a flexible, circular flow around a tall and dramatic atrium. This atrium acts as the Citizens’ Forum. The Citizens’ Forum is a public square with meeting rooms and public services. Workspaces extend up five floors in connection with the atrium. There is a canteen on the sixth and top floor with magnificent views towards the surrounding ocean and mountains. 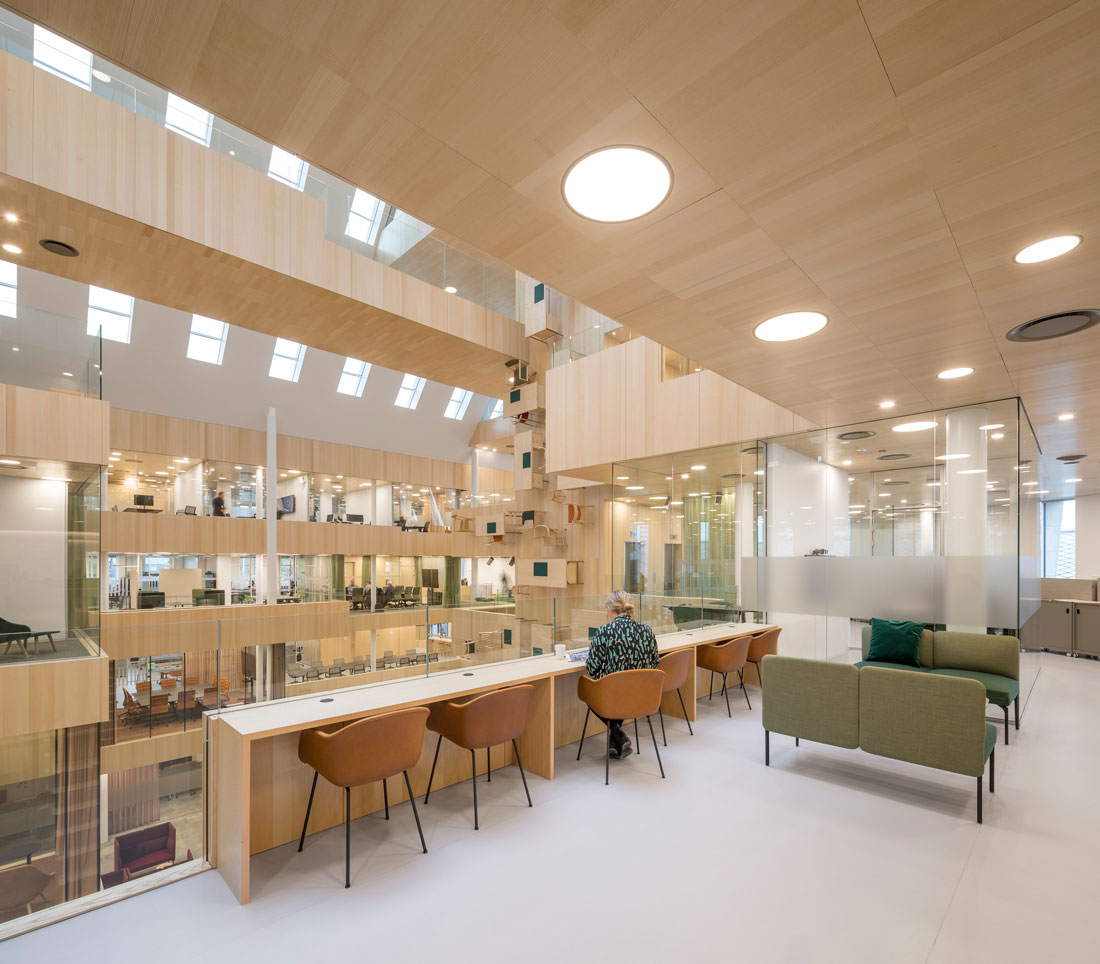 The existing buildings on the site are the old city hall, with a brown plaster façade, and the old national bank, clad in a richly patterned natural stone. Both façades are preserved. The new building is shaped with sloping façades mirroring the roofs of the existing buildings. This creates a unity between old and new which is further emphasized by the brownish Jura Gelb stone used for the façade of the new building. The color resembles that of the old city hall, while the stone pattern resembles that of the national bank façade. The new, faceted façade is a modular system with horizontal, vertical and diagonal lines that create a singular volume as a whole and in detail. The different angles of the stone catch the light and cast shadows for an ever-changing play of light. 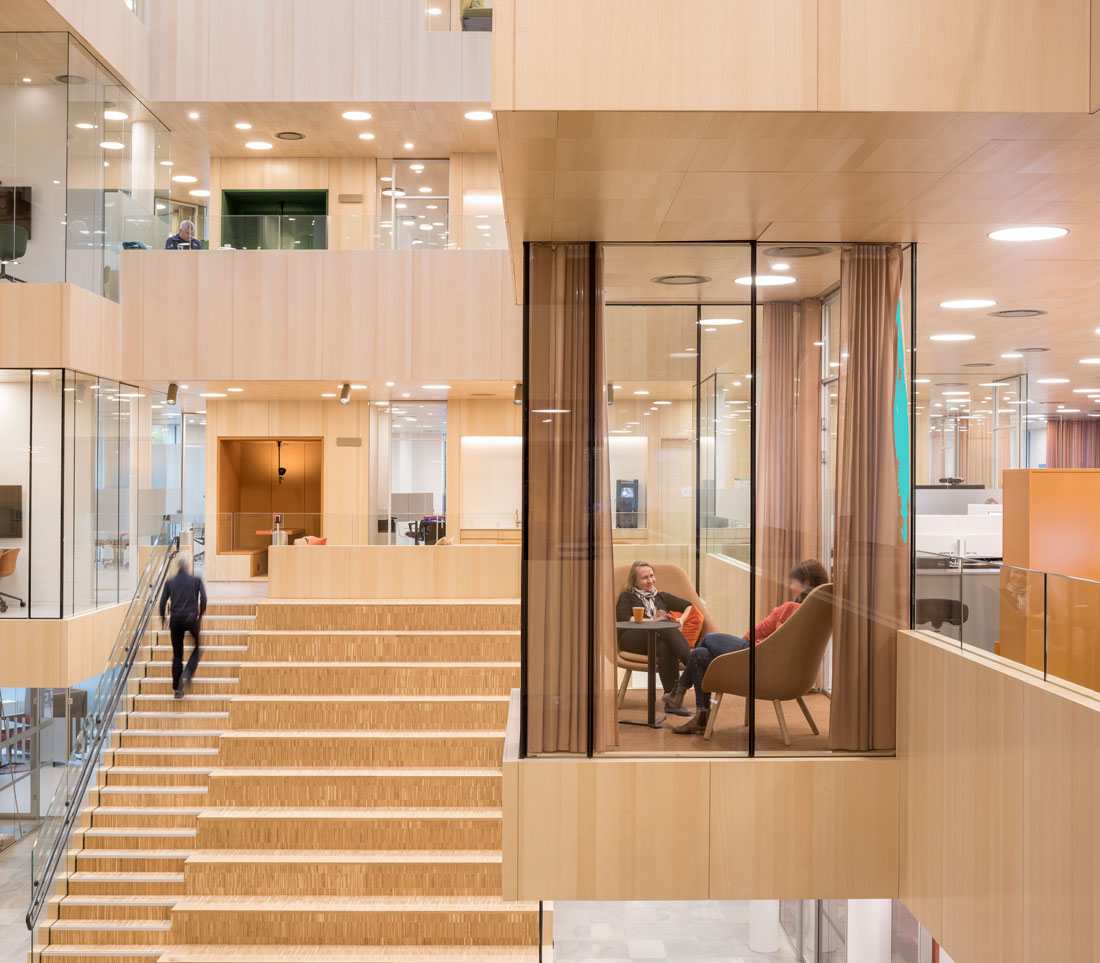 The interior is lined with light ash wood, both on the walls and ceilings. The uniform wooden lining creates a warm, Scandinavian home-like feeling and is combined with an office layout based on new ways of working. In this way, the home workspace has been brought to the office. 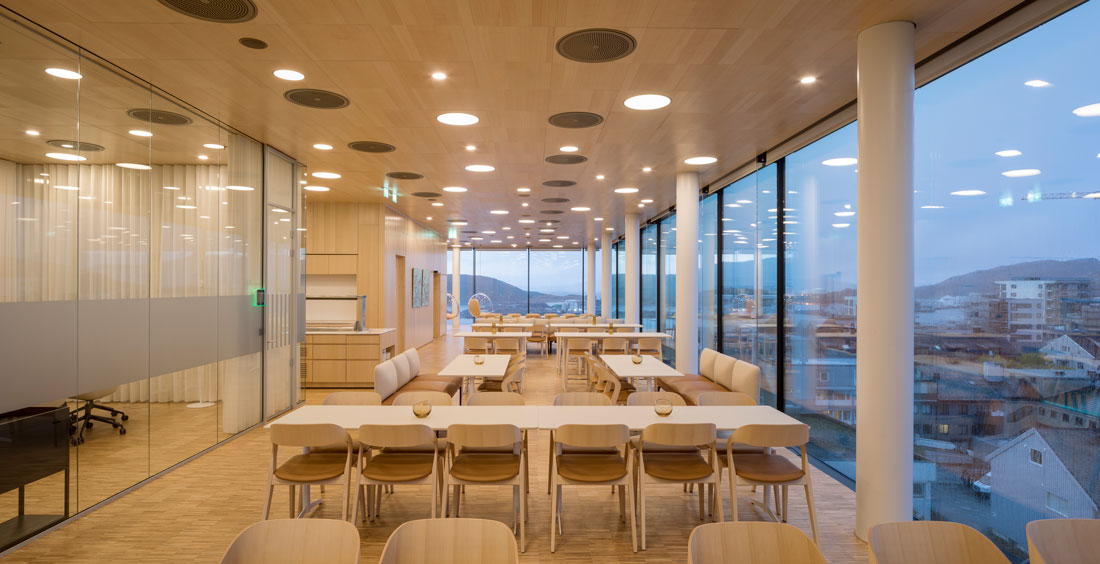 The atrium around which the workspaces wrap recalls a Piranesi drawing, with the staggered balconies, setback atrium fronts, varied floor heights, and a vertiginous art piece, “Dikt til Byråkratiet” (“Poem for the Bureaucracy”), by the artist Per Kristian Nygård, mounted on the wall and spanning the full height of the atrium. 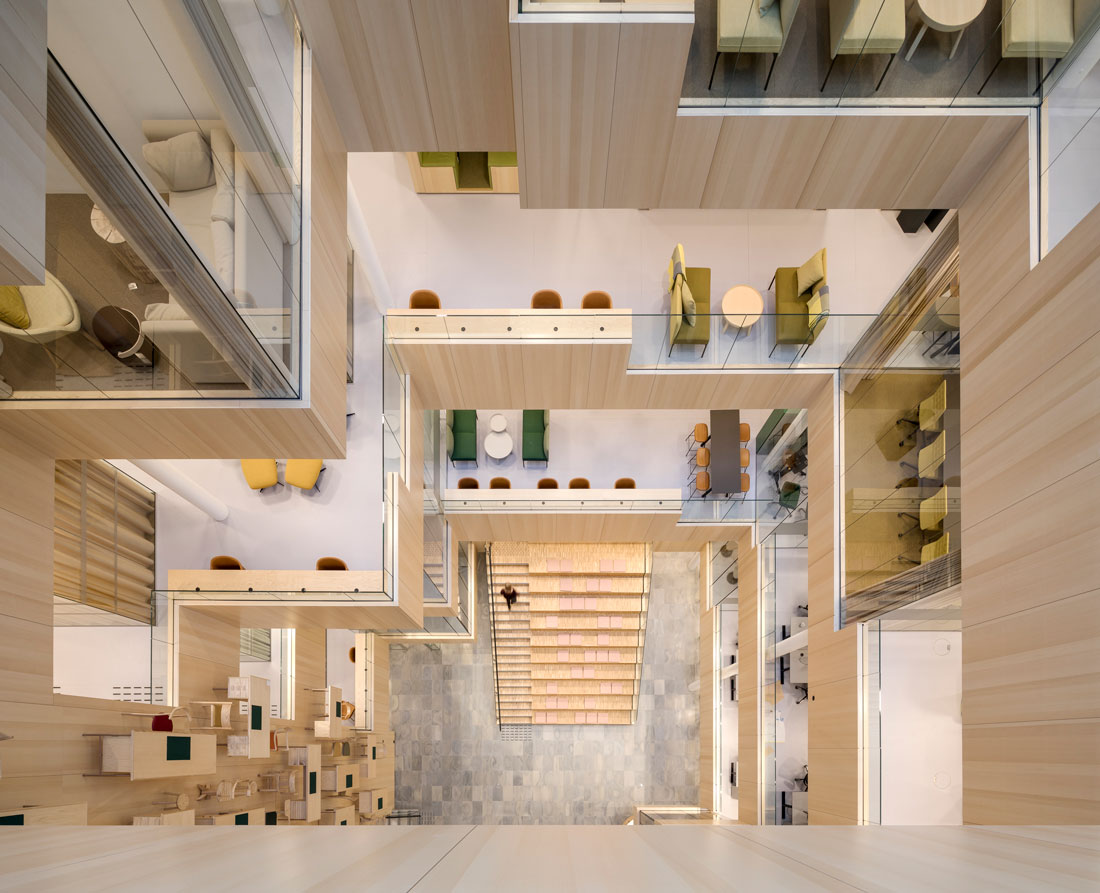 The landscape around the city hall consists of beautifully shaped public areas and squares with seating. These are covered in natural stone.