Bicyclepark in Utrecht: Cycling as a Key Ingredient for a Sustainable City

Historically, the Dutch have always been fervent cyclists. This enthusiasm is now growing even more, as cycling is being discovered as a key ingredient in the sustainable city. New bicycle typologies such as the introduction of the so-called e-bike are helping to amplify this shift in mass transportation. More and more pu­blic transport hubs will be complemented with extensive and user-friendly ameni­ties for cyclists, as increasing amounts of people begin to favor the combination of cycling and public transportation over car use. 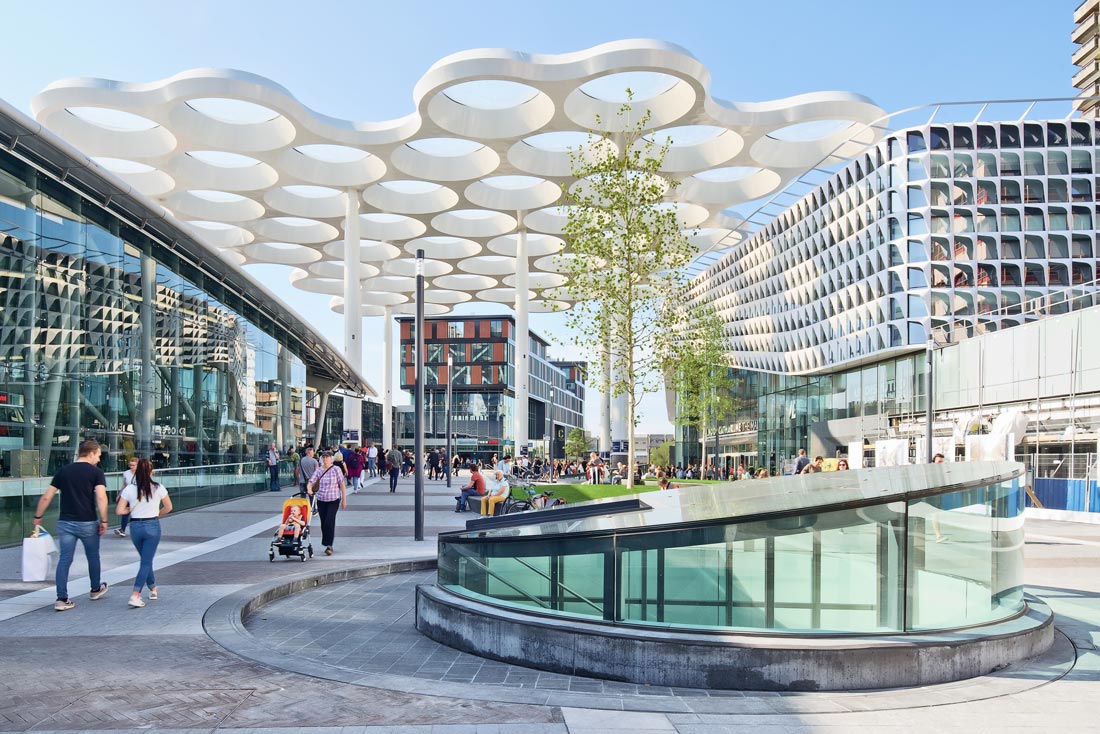 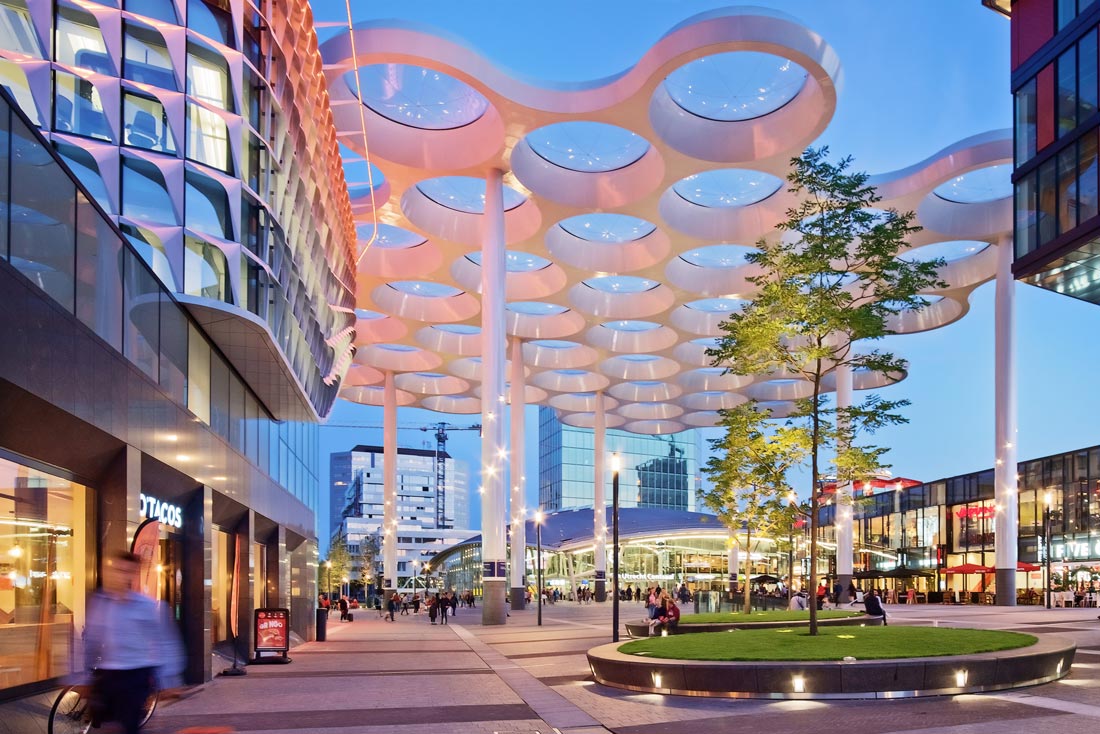 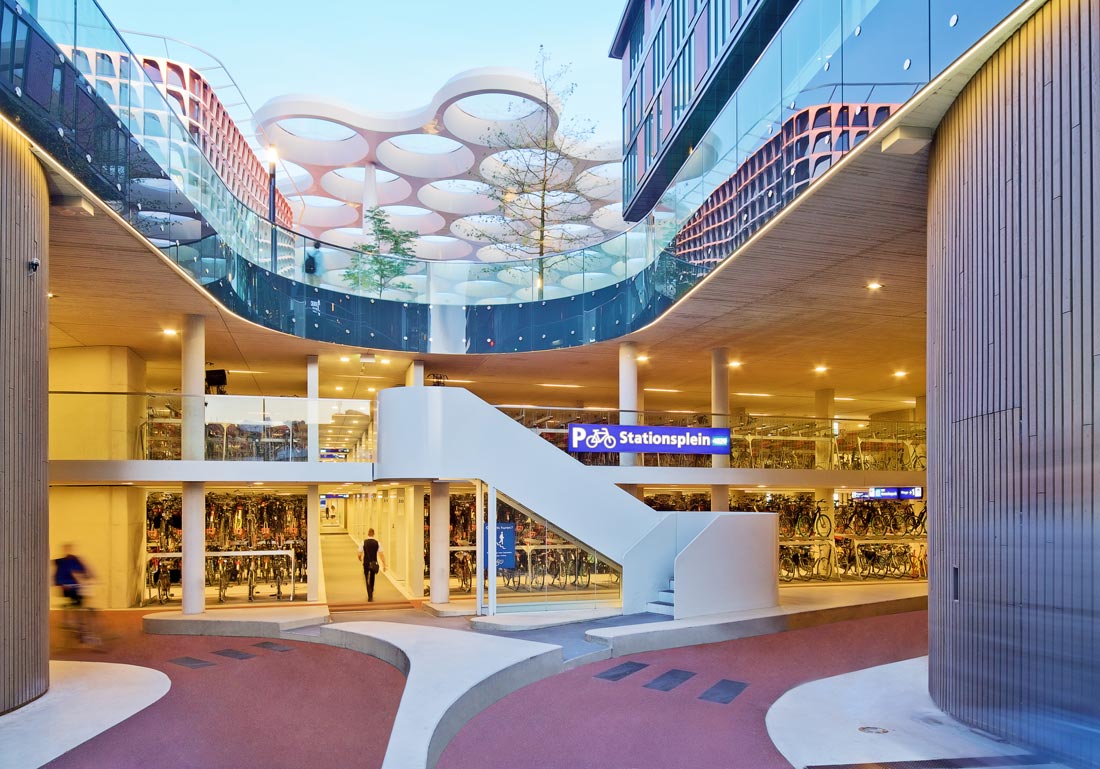 The Utrecht Central station area is currently undergoing a major makeover. By healing the scars left behind by a number of ‘modernizations’ carried out in the 1960s and 70s and adding new functions to the area, this part of Utrecht is on the way to finally becoming a vibrant and friendly part of the city center. To achieve this, inner city highways are being replaced by more modest streets, and historic canals are being restored. Also, the huge modernist megastructure that once tied together the railway station and the Hoog Catharijne shopping mall (both the biggest of their kind in the Netherlands) has been taken apart, allowing for a new public street and square to be inserted, together with a bicycle parking garage. This new “Stationsallee”, a street aimed mainly at pedestrians, rises by means of 30-meter-wide staircases, to a level of 6 meters to widen into a square, where the entrances of both the station and the shopping mall are situated. An enormous iconic canopy marks the square and enables a dry crossing between the parts that have always been connected. 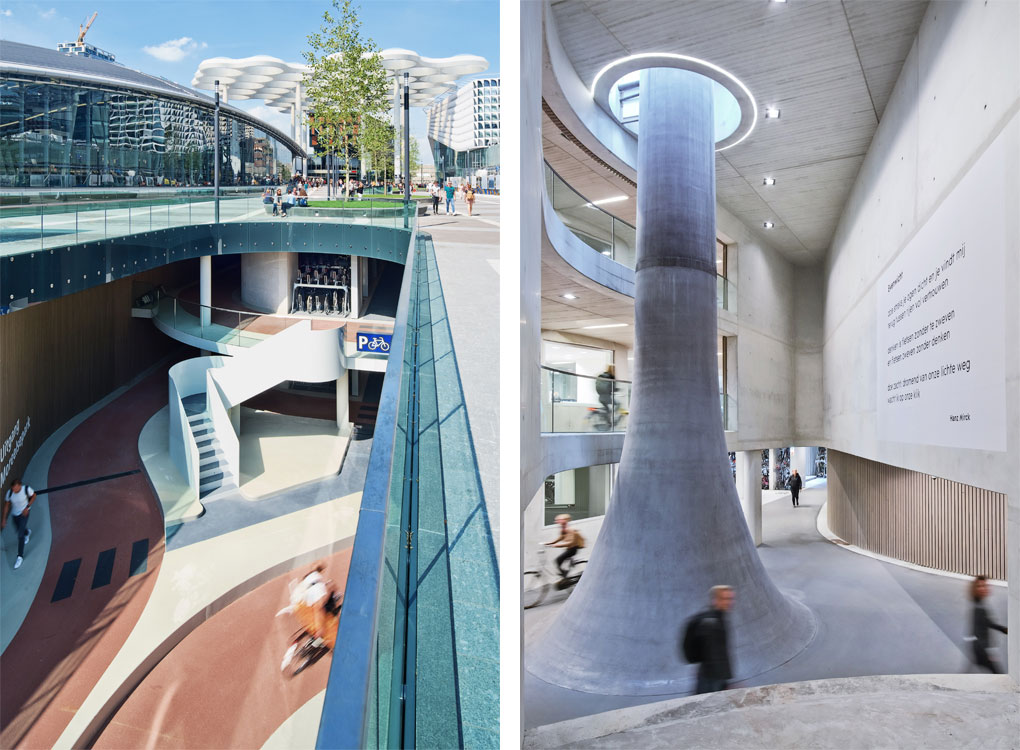 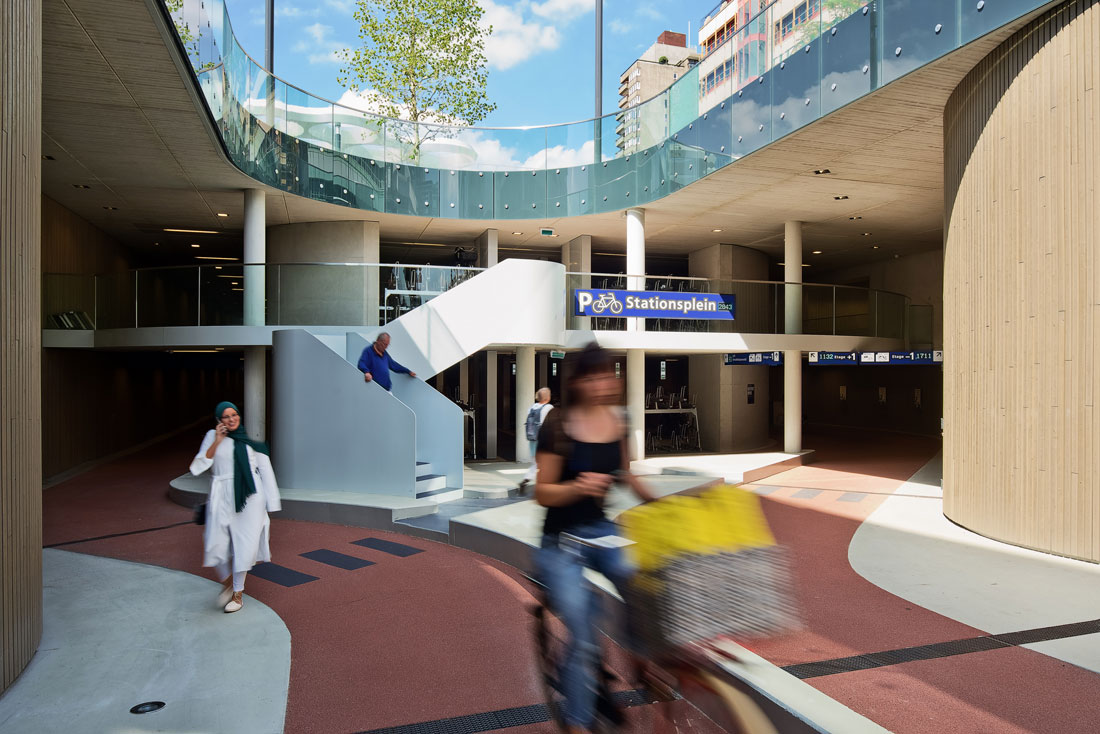 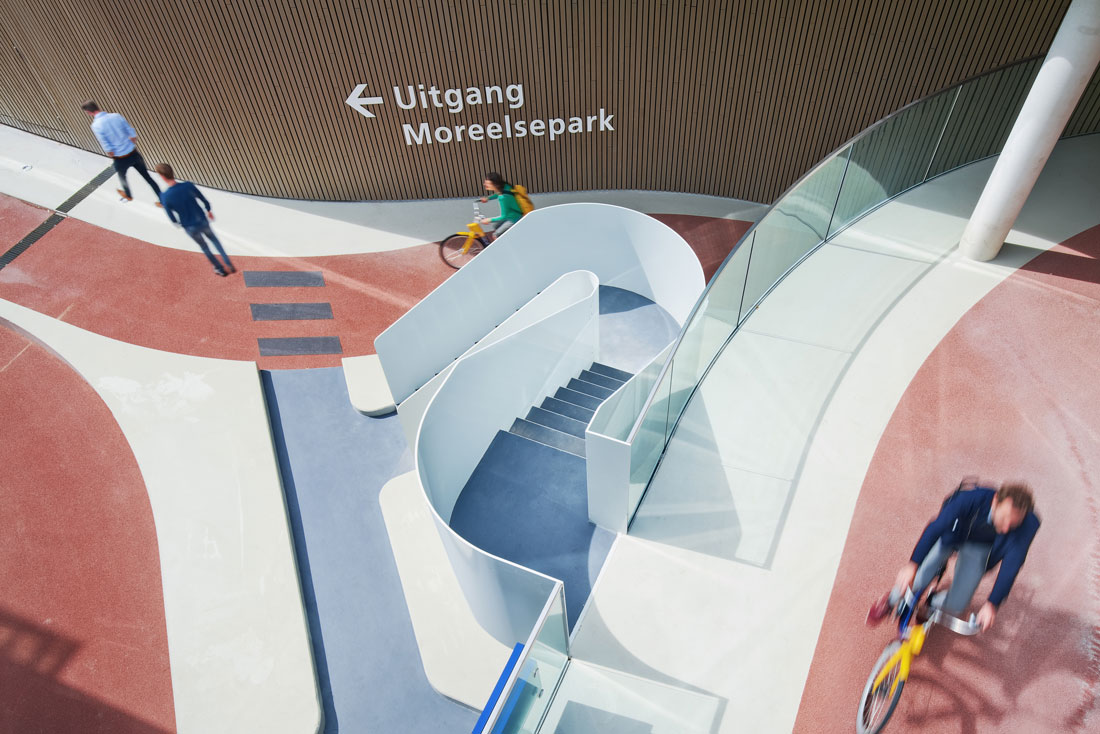 The three-story bicycle parking garage is situated underneath the square. It was designed with three aims in mind: convenience, speed and safety. In order to achieve this in a facility of this scale, cyclists are able to pedal all the way up to their parking slot. Additional facilities such as a cycle repair shop, a cycle rental outlet and several floor managers meet users’ every need. Stairwells and tunnels create direct connections to the elevated square, the main terminal building and the platforms. To ensure good orientation and plenty of daylight, the stairwells are located inside atria covered by glass roofs. Large windows in the outer walls provide users with views toward the platforms and the bus terminal. 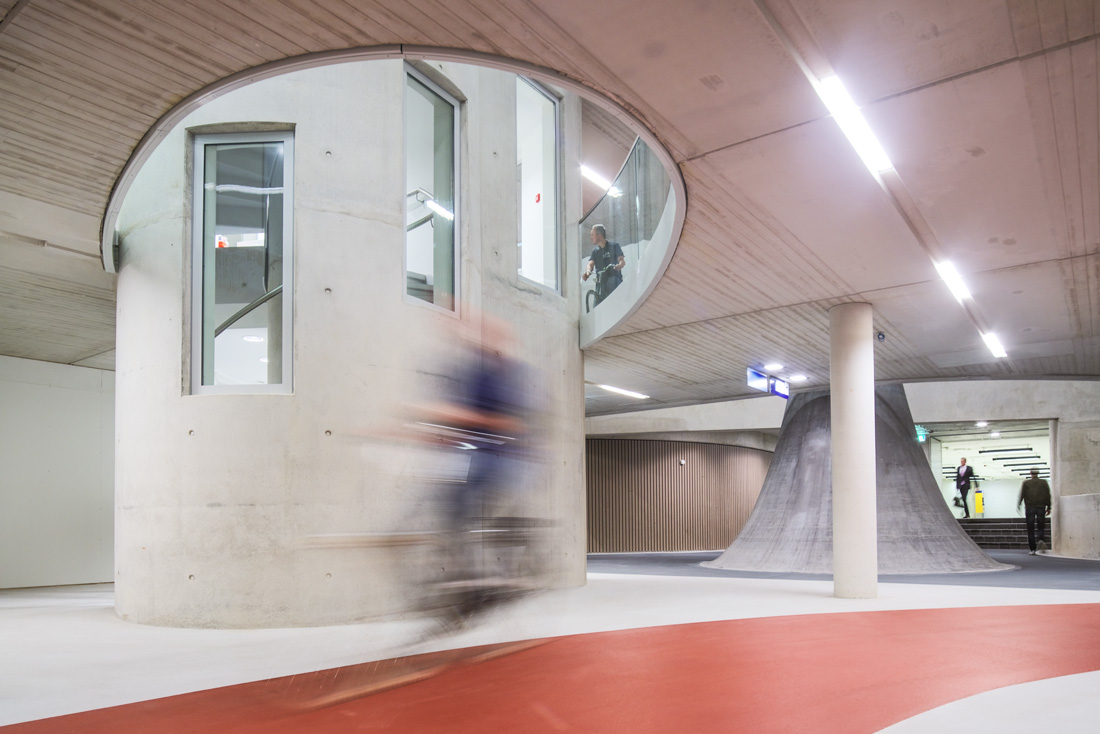 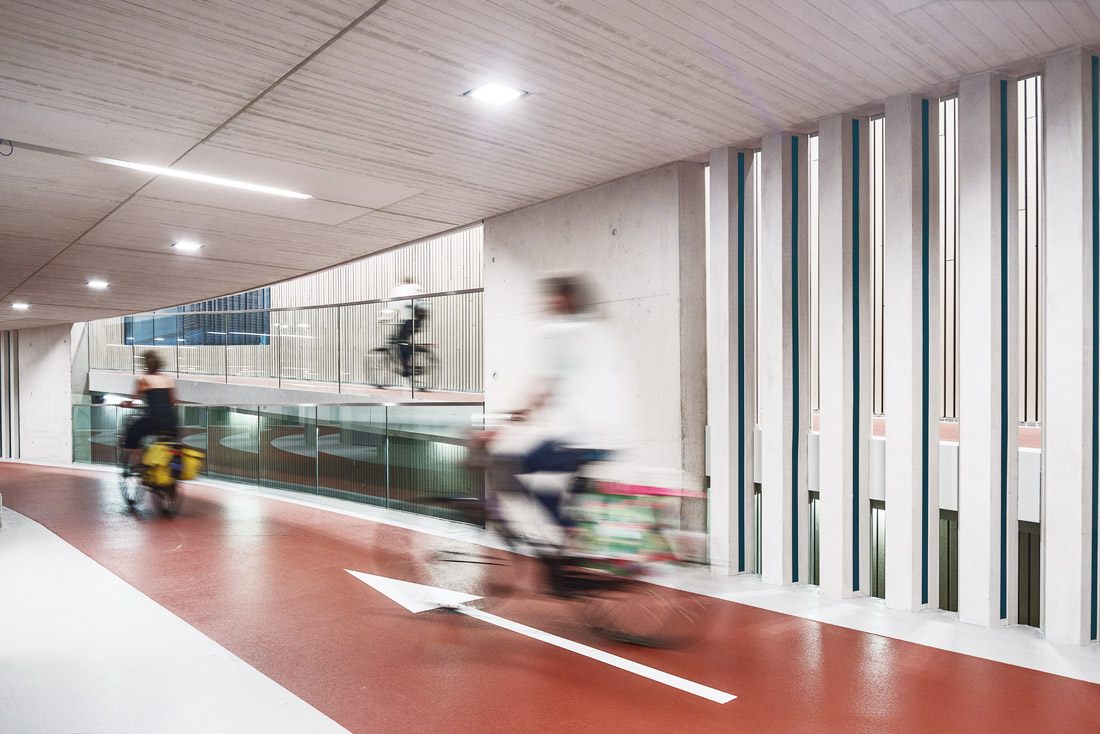 The bicycle parking lot uses durable materials such as concrete, steel and chemically treated wood. In combination, these raw materials create an atmosphere in the building that still feels warm and pleasant. Three concrete columns supporting the giant canopy extend all the way down into the parking area. These trumpet-shaped elements have a diameter of 5 meters at floor level, falling to 1.2 m at the top, and each one is cast as a single element. The building is more than just infrastructure. It adds an exciting and surprising architectural dimension to the city. Cycling through the garage has become a unique experience: not just another part of everyday life in the city, but almost an attraction in its own right. 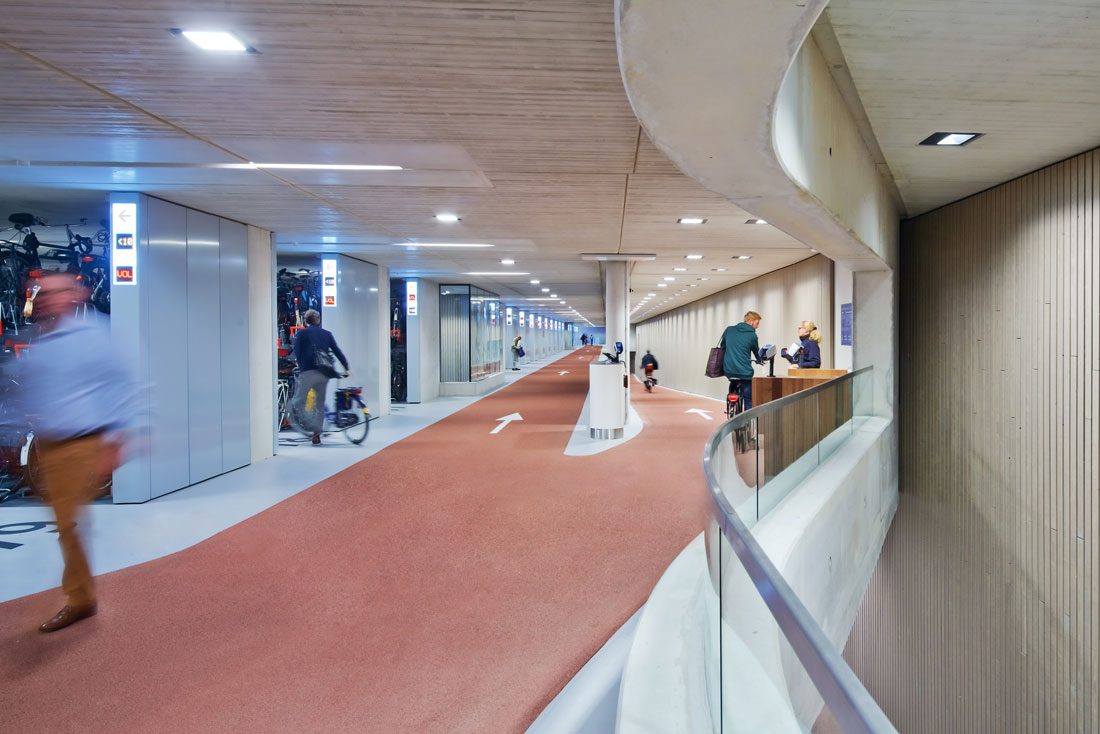 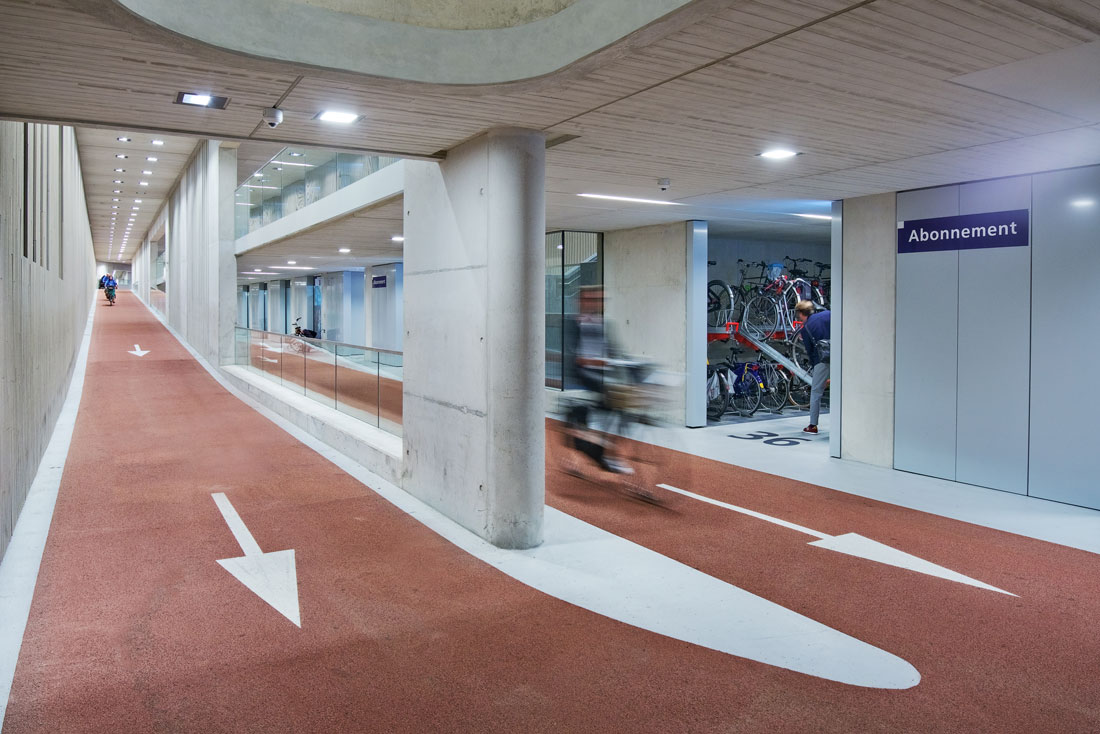 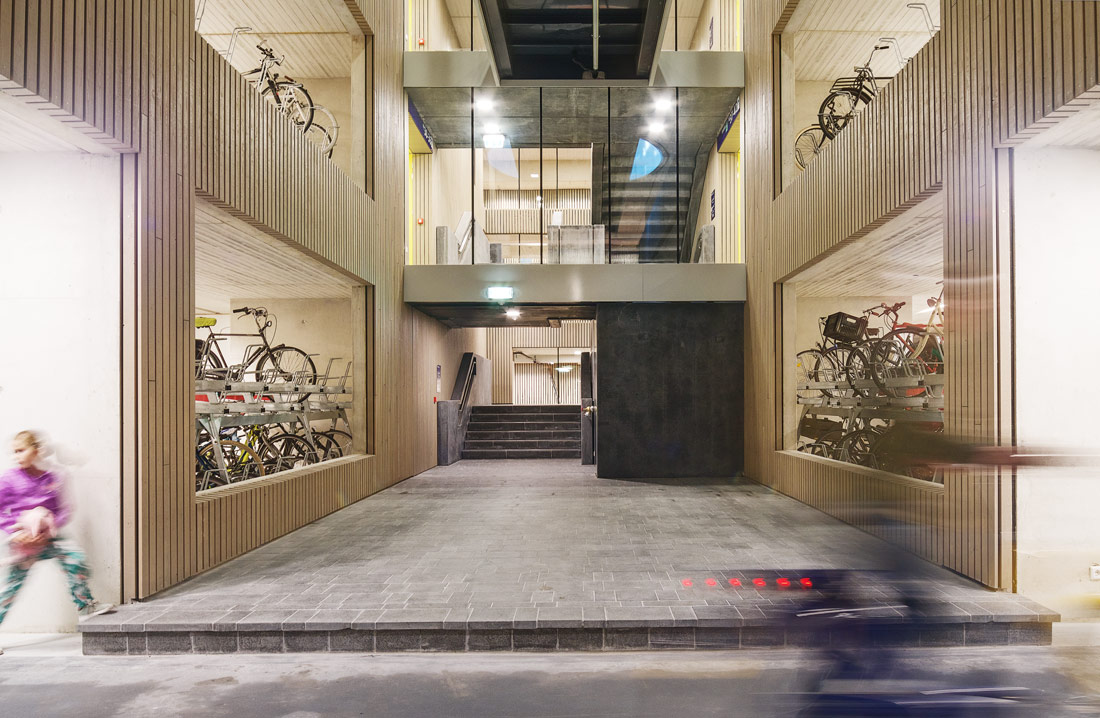 The first phase of the project was opened in early August 2017, providing room for 6,000 bicycles. The cycle parking area opened officially on August 19, 2019 and it will have a world record capacity of over 12,500 bikes.