Ensuring mobility and connectivity across the 36 municipalities that make up the Metropolis Barcelona is vital in order to guarantee the development of the region as a whole. However, conflicts can often arise as a result of the pollution generated by these interconnections. Consequently, Barcelona Metropolitan Area (AMB), which is the third-largest local administrative body in Catalonia by budget and has an eminently technical focus, has created Bicivia: a network of cycle paths that aims to weave a connecting thread through the metropolitan area by creating a new, interconnecting grid. Full coverage is assured through the inclusion of four vertical axes and five horizontal axes. The project also serves to articulate AMB’s key priority areas, namely: safety, sustainability, and the prioritisation of pedestrians and cyclists. 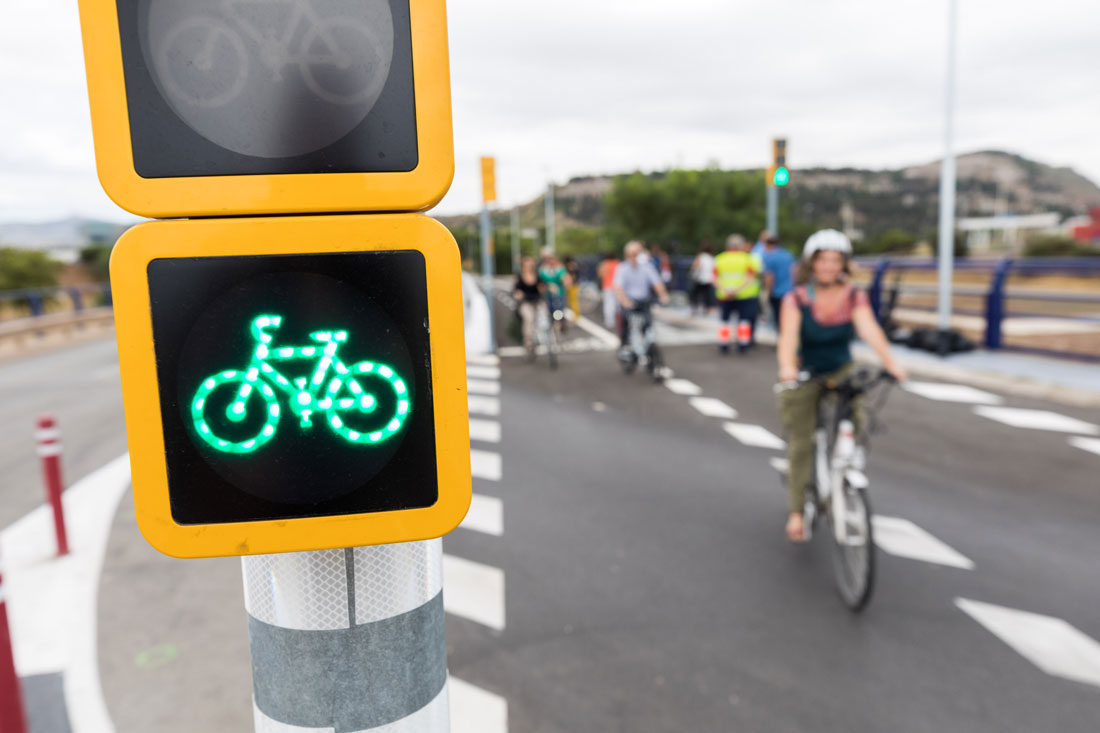 Bicivia will soon take an additional step forward, when AMB awards a second round of subsidies to new municipal projects for the building of cycle paths. Further kilometres of paths are to be built with an approximate investment of 5.7 million euros, alongside the 2 million euros in subsidies from AMB. In total, the planned new cycle network will incorporate more than 500 kilometres of paths, divided into basic and secondary networks. From a vertical perspective, the network will follow the course of the Llobregat and Besòs rivers, and from a horizontal perspective it will run parallel to the line of the coast (along four axes) and through the Vallès area (along one axis). 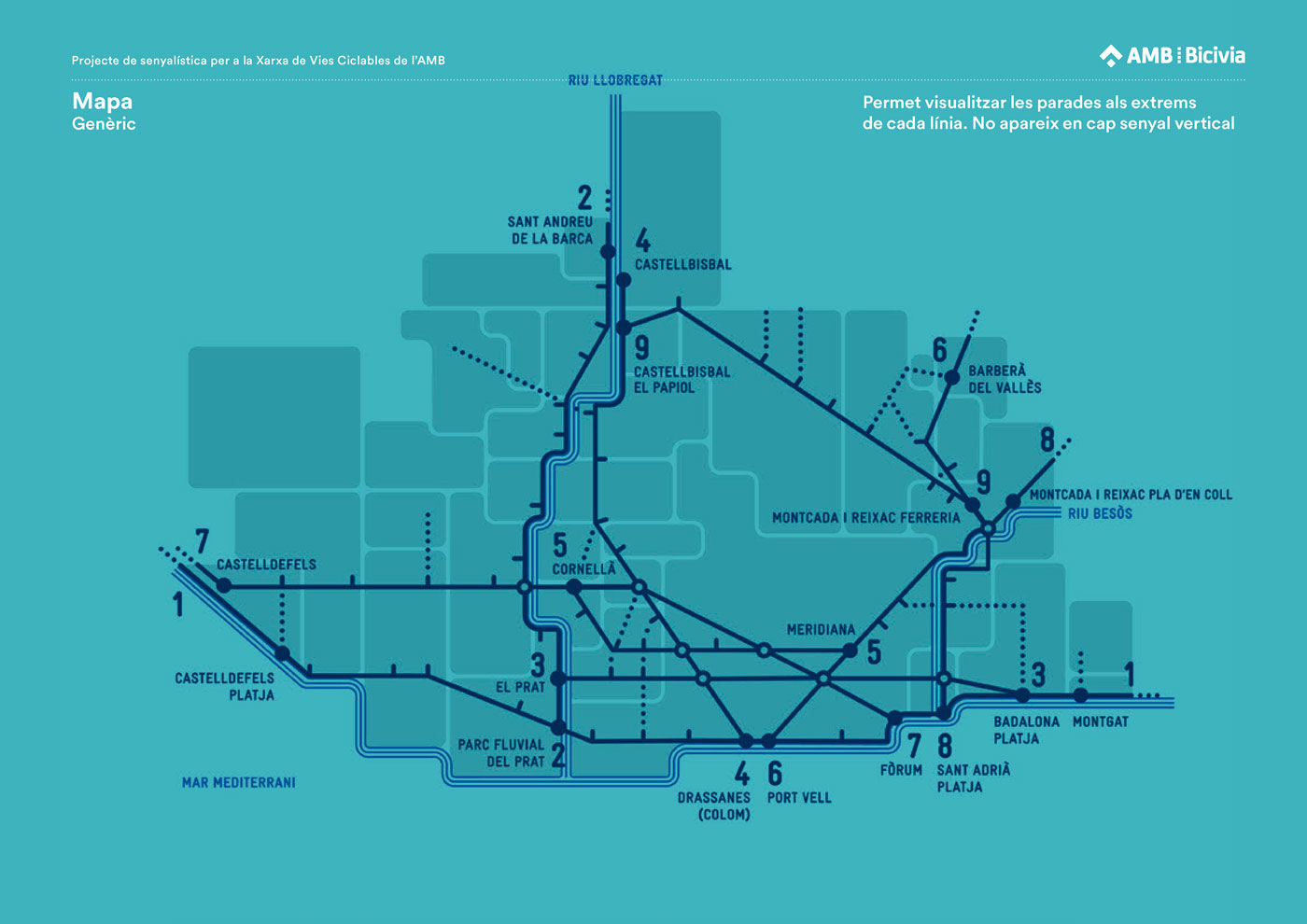 One example of how this network will link different areas is the cycle path opening this March, which will connect Barcelona and Esplugues de Llobregat, or in other words, Barcelonès and Baix Llobregat. These two areas are interdependent in terms of urban and economic development, and therefore require operational, uninterrupted interconnections. As Antoni Poveda, the vice president for Mobility and Transport at AMB, explains: “This project aims to strengthen and facilitate the use of more sustainable modes of transport, such as bicycles”. The new link, which will promote a more active form of mobility, has a length of some 880 metres and incorporates separate spaces for pedestrians and cyclists. It splits off from the cycle path on Avinguda Diagonal and runs beneath the Ronda de Dalt, continues on above the link road between the Ronda and the B-23, passes through a tunnel beneath the various interconnections between the two roads and finally merges with the pavement on Avinguda dels Països Catalans in Esplugues de Llobregat. As such, the project manages to solve the Barcelona-Baix Llobregat interconnection problem for pedestrians and cyclists, which is largely the fault of the complicated road network in and around the Ronda de Dalt. 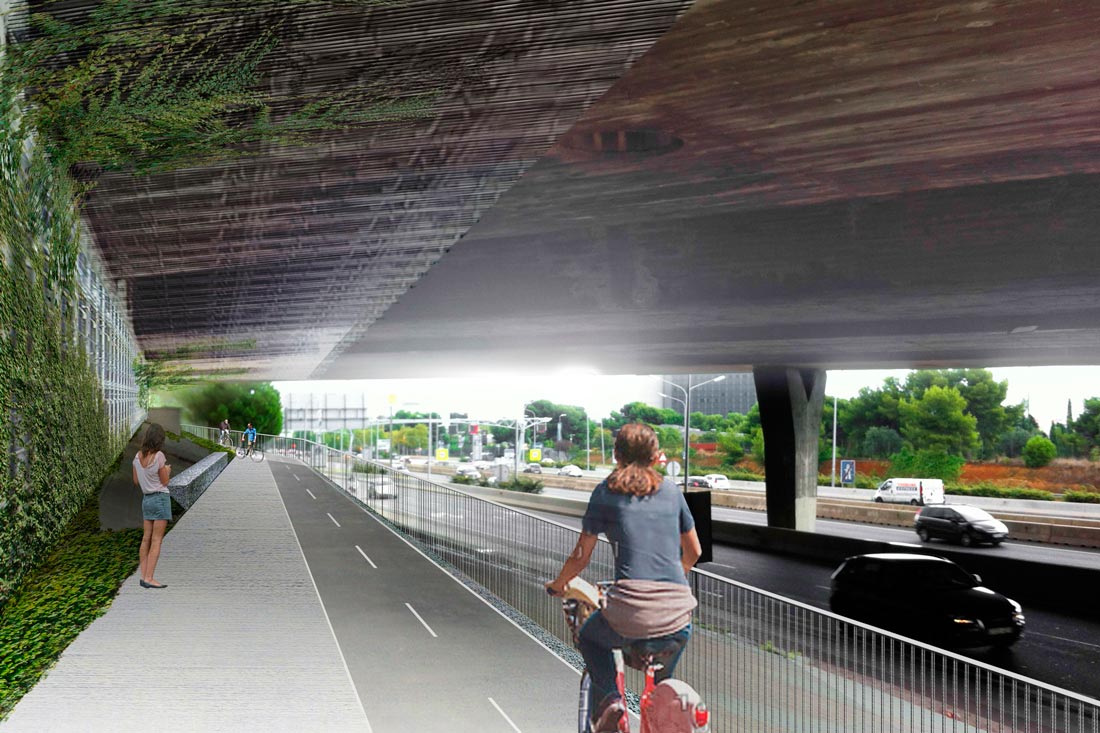 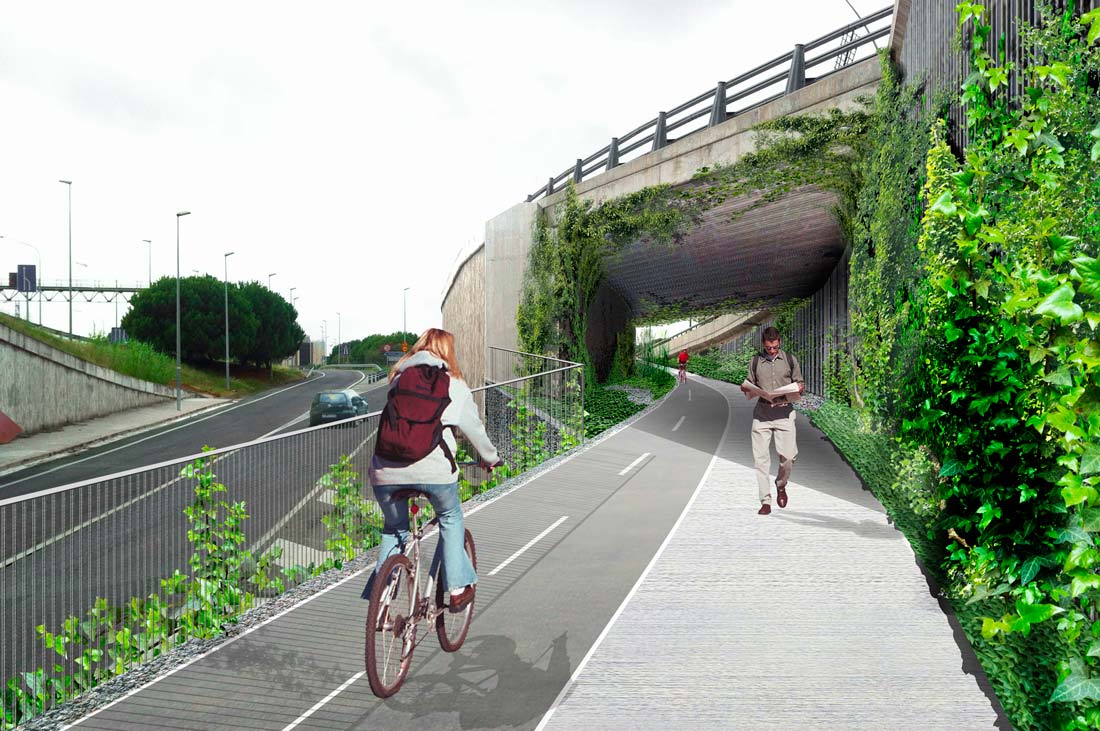 A plan that also aids mobility in industrial zones

As well as connecting municipalities and counties in the Metropolis Barcelona area, Bicivia also aims to improve the sustainable links between industrial estates and city centres. From a mobility perspective, municipalities possess a very diverse range of spaces that are often difficult to access in anything other than a motorised vehicle. Industrial estates – and their connections to central areas – are a good example, as evidenced by the links between Barcelona city centre and Zona Franca (the largest industrial estate in Catalonia). To help solve this problem, on 25 July last year a cycle path linking the two areas was opened, and pedestrians and cyclists are now able to travel safely from the heart of the city out to the industrial zone. The path runs for some 500 metres and allows its users to overcome the obstacles of the Ronda Litoral and the access roads to the Port of Barcelona, which were previously impassable for non-motorised traffic. The importance of this initiative, which was also jointly funded by municipal and metropolitan bodies, lies in the economic muscle of Zona Franca, which is home to more than 250 companies. In 2005, 67% of its employees travelled to work by car, and it is hoped that the creation of a cycle path will make a significant contribution to reducing this figure. 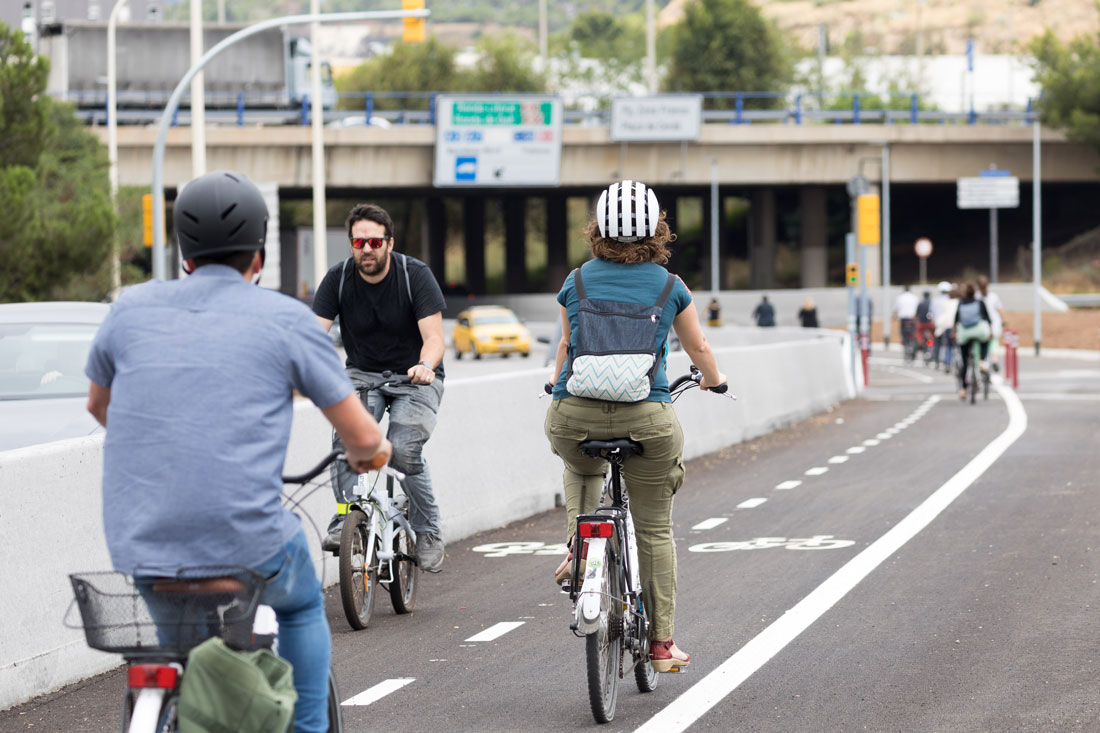 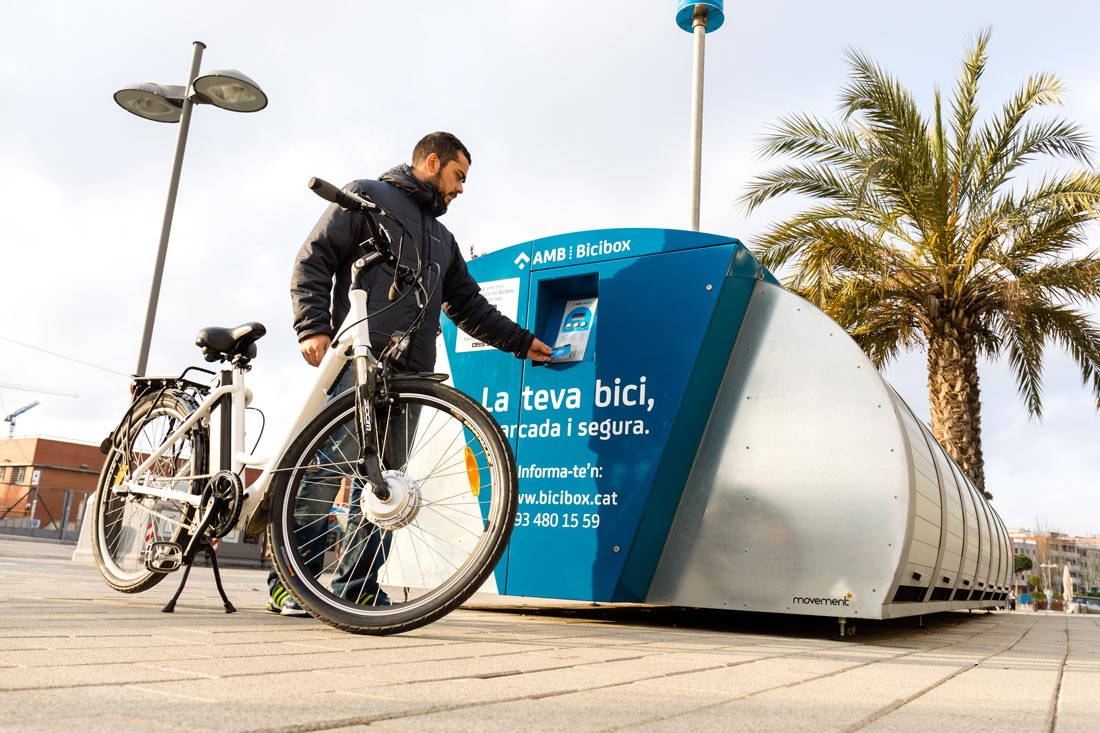 “We are convinced that this approach will help bring about a modal shift in day-to-day mobility from private motorised vehicles to bicycles”, says Antoni Poveda. Taking into account the pollution data for the Metropolis Barcelona, it is clear that cycling has become a key weapon in the struggle to overcome this hazard that threatens the health of the entire city and its environs. For this reason, Bicivia represents an operational and effective solution, which must nonetheless work hand in hand with a change in citizens’ habits, as stated by Poveda. Public bodies must facilitate the use of sustainable transport, and a major step forward has been taken with this network of cycle paths that will establish uninterrupted links across an area which, until very recently, only echoed to the sound of engines and car horns. 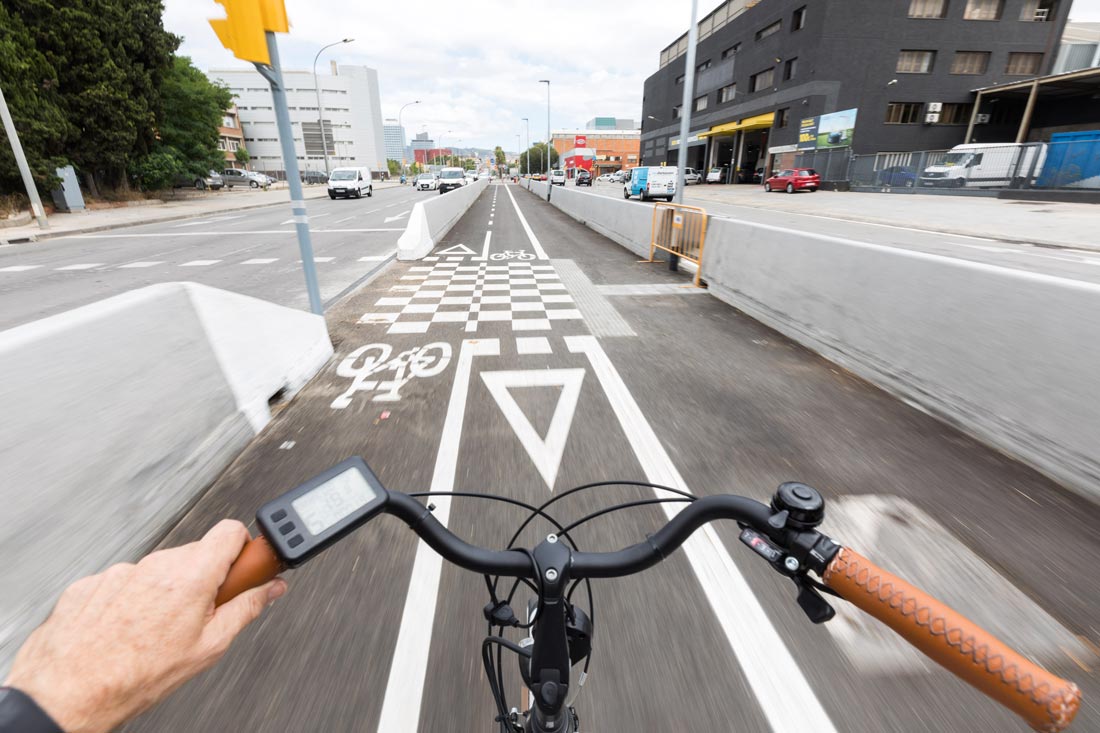