In terms of the urban fabric, Berresgasse Educational Campus can be seen as the starting point (or finishing point) of the future district, which is being developed to the west and will be home to more than 3,000 apartments as well as offices, shops and leisure facilities.

The objective of the project is to maximize the spatial synergies both between the local area and the campus and within the campus itself. This will allow the new educational campus to position itself as a laboratory and a testing station for new educational practices – in a similar way to a kaleidoscope. 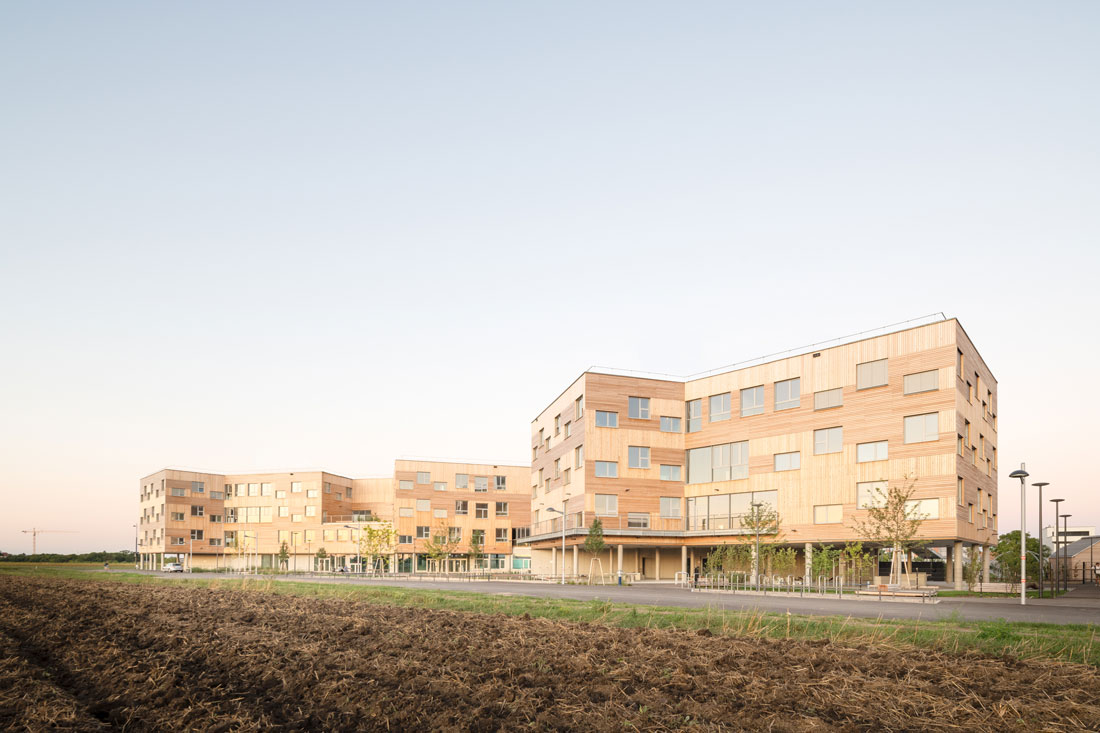 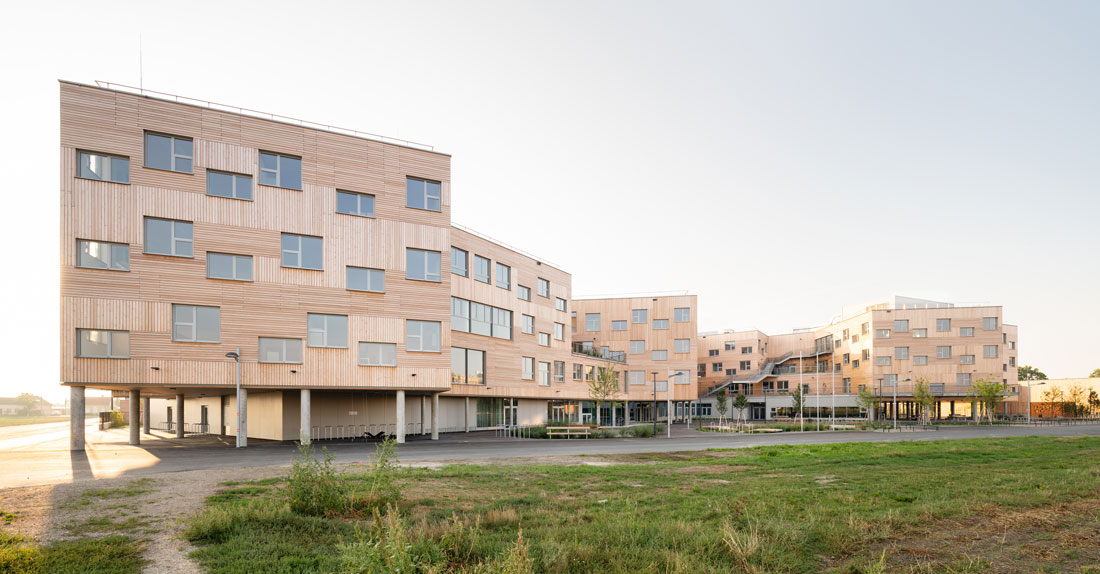 The multifaceted, north-south oriented volume of the educational campus meanders across the site, creating three different and contrastingly treated external areas: a publicly accessible, v-shaped forecourt of over 3,000 m² that is located on the street to the west, a richly planted area facing the detached houses, which consists of over 10,000 m² of shared, exclusively open green space for the campus, and a third area on Berresgasse that is dominated by the sports hall and the multipurpose hard court.

The large building complex is organized into a sequence of easily recognizable and manageably scaled learning clusters, each of which has a separate entrance and is clearly legible in its urban context. 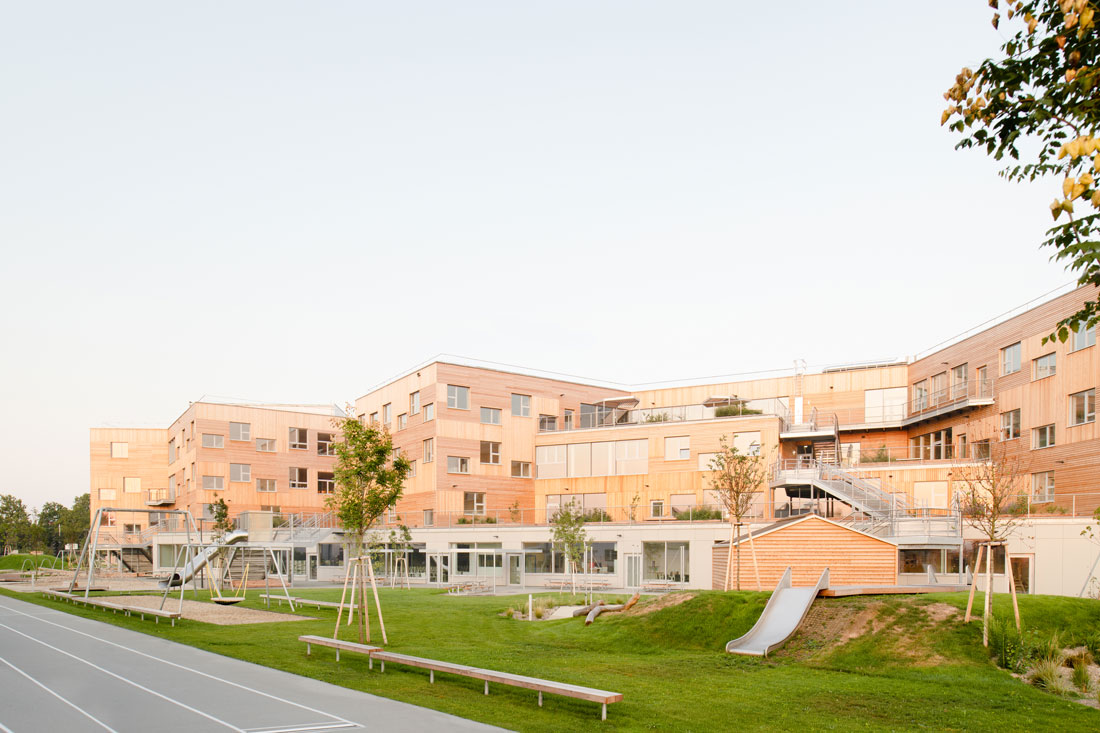 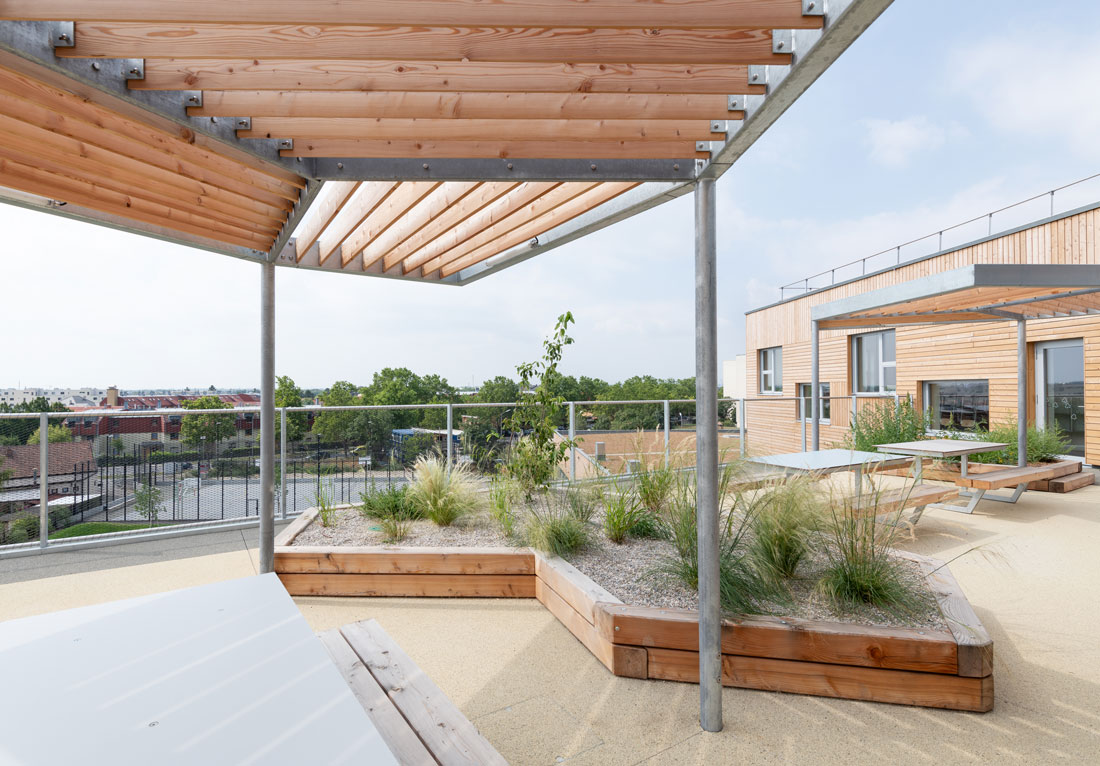 A learning cluster (Bildungsbereich or BiBer) is an autonomous group of classrooms and ancillary spaces organized around a central common area. This approach enables the relatively large number of classrooms – 44 – to be grouped together in a series of smaller and more manageable spatial units that strengthen the notion of cooperation between groups and classes. 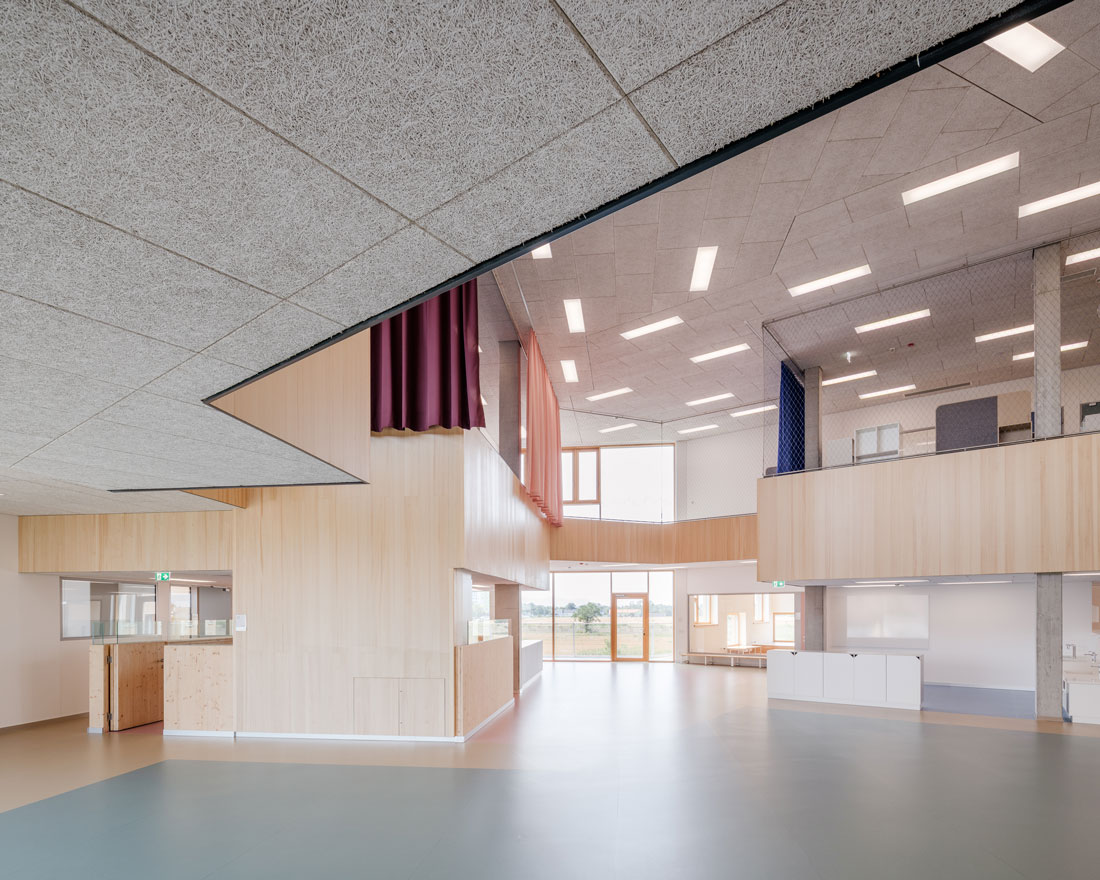 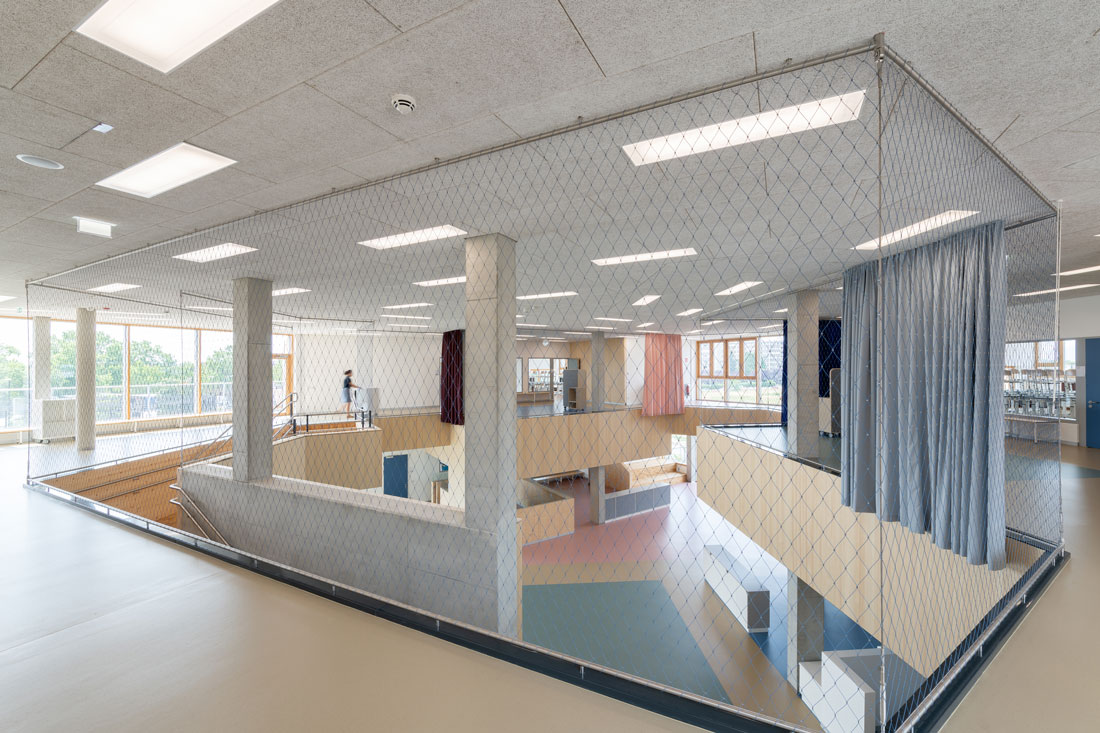 In morphological terms, the building undergoes a pyramid-like reduction from the rectangular ground floor to the strongly articulated volume at the fourth level. This results in a total of around 2,000 m2 of generous, interconnected terraces on all the upper levels, some of which contain islands of rich greenery that effectively expand the garden into a third dimension. 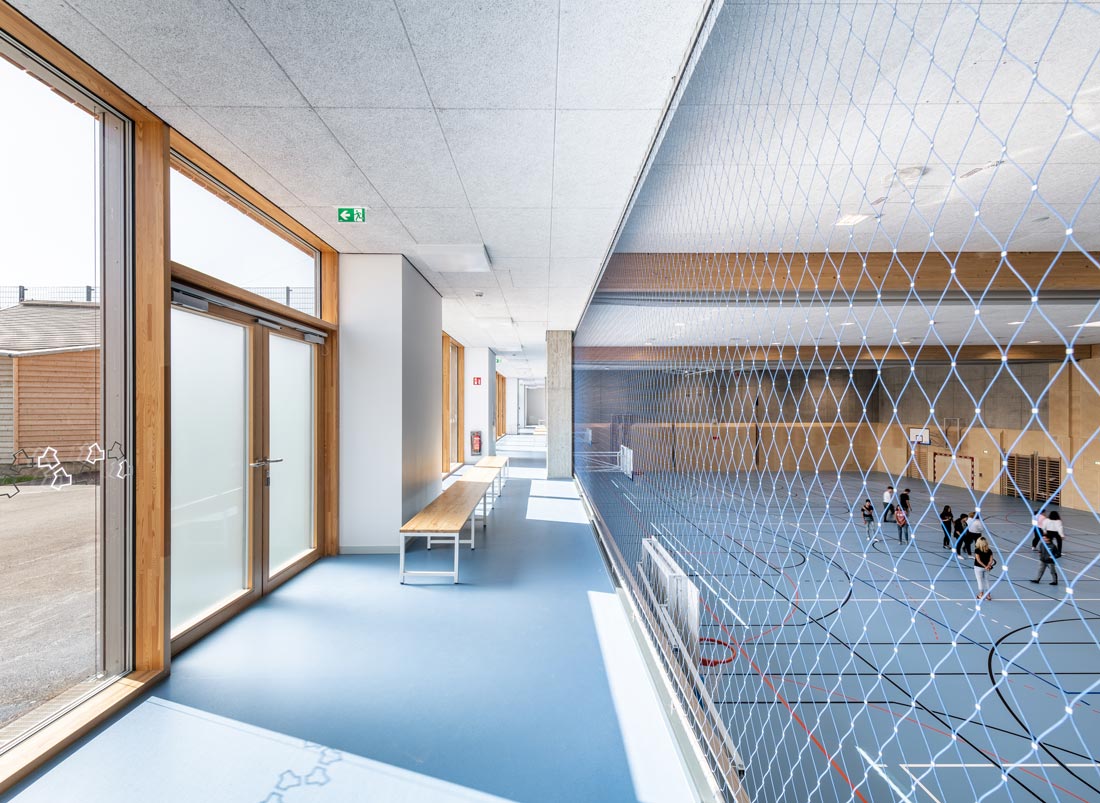 This overall organizing principle leads to a strong constructional differentiation between the building’s upper stories, which are very different from the two neighboring typologies – detached houses and street front blocks – in terms of scale. Given the size of the site, this gives the project an independent character and a dimension that are appropriate for an educational campus. 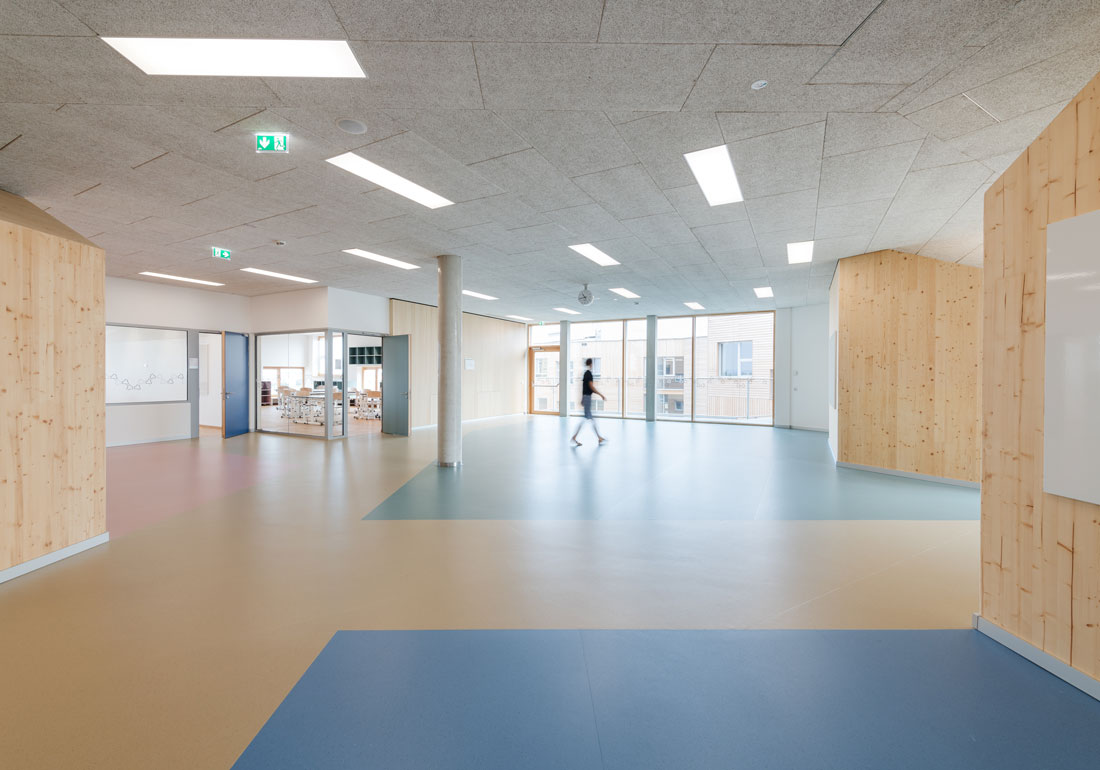 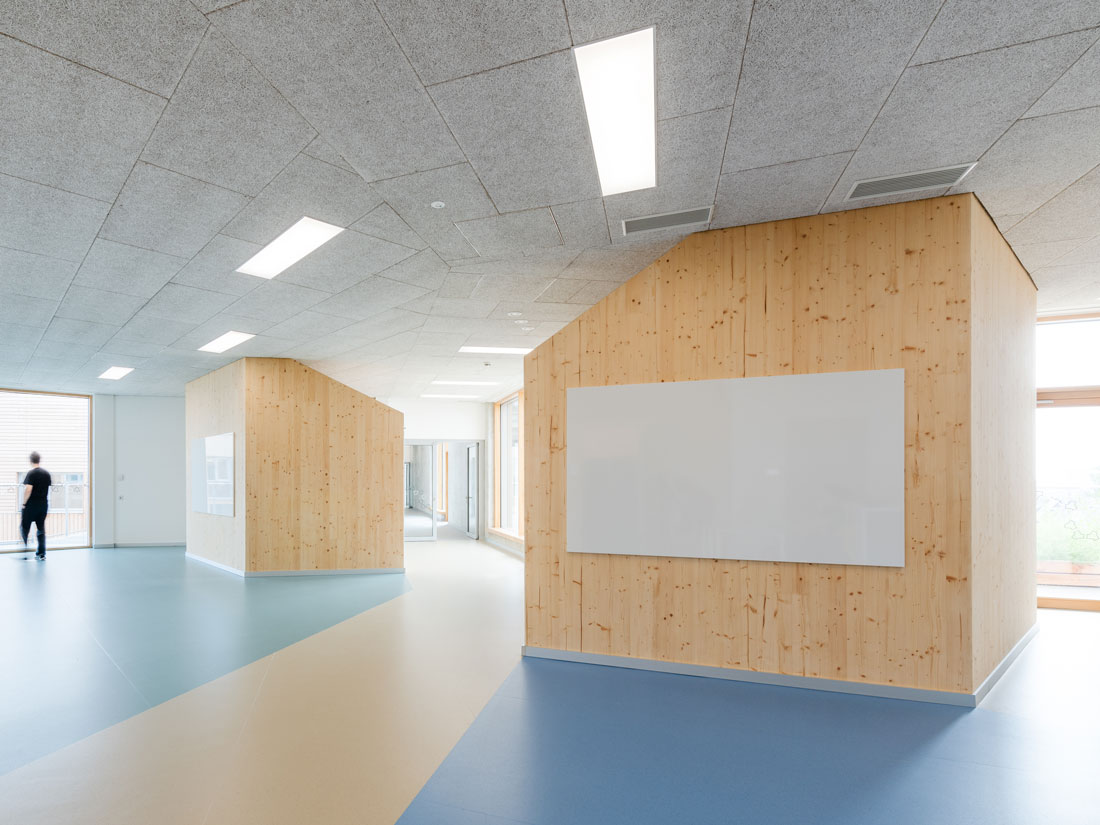 The building can be seen as a symbiosis of a range of typologies: a hybrid of a terraced, slab, bridge and hall structure. This is the first completed school project of this scale that has consciously replaced the orthogonal organization of the classrooms with a radial, windmill-like configuration that enhances the relationship of the spaces with each other and with the urban context.

This kaleidoscope-like expression of the overall organization of the educational campus gives these learning clusters the strong autonomous sense of being key places of learning for the students. 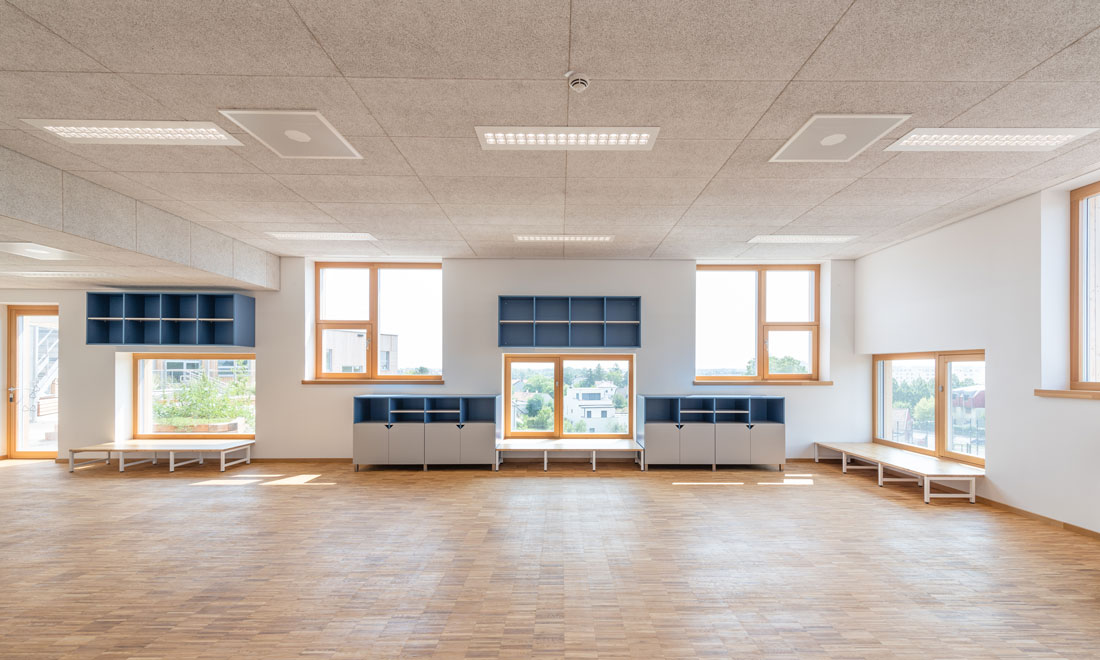 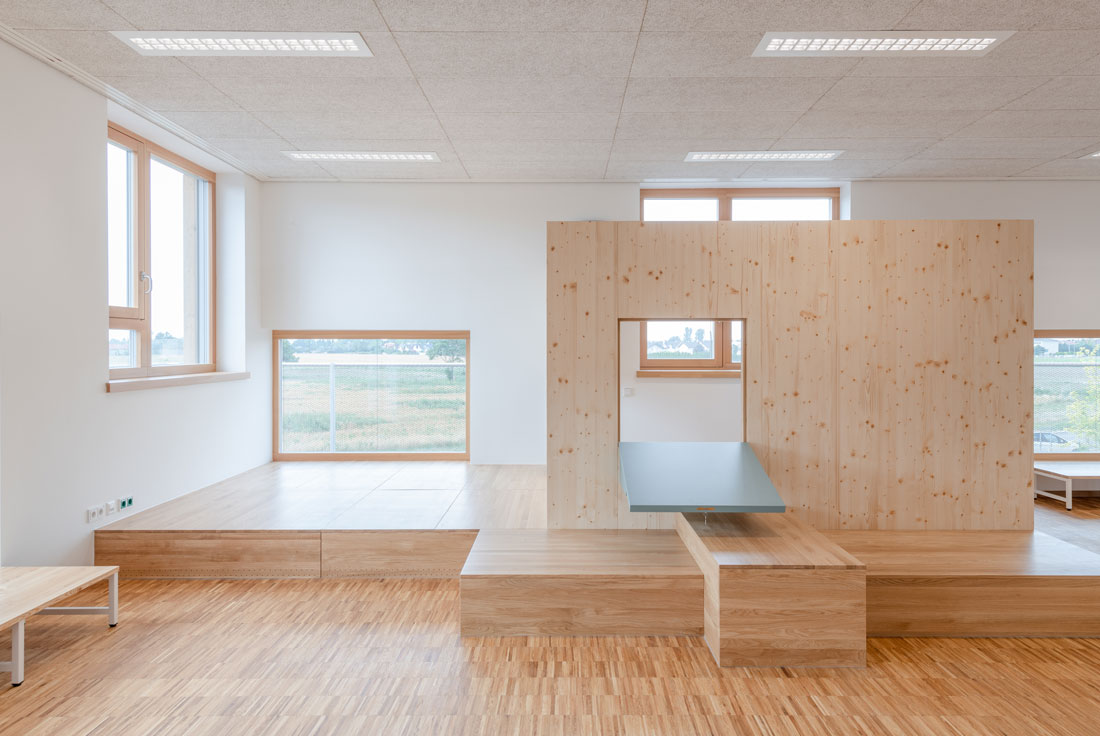 This is also the first time that a kindergarten has been connected with a primary school via a central, hall-like two-story atrium, which is oriented in every direction. These learning clusters are separated by three staircases, each of which has a separate ground floor entrance from the forecourt on the street.

The central common areas in the atria of the individual BiBers (learning clusters) can be used in a wide variety of ways:

Their different zones permit age-specific interaction but also encourage a sense of community within a “BiBer family” that transcends the wide age difference.

With a height of over seven meters, these atria maximize visual and spatial connections while also generating sufficient opportunities for retreat and concentrated work with the help of curtains, seating galleries, mobile partitions and “reduced” room heights of just 2.2 m. 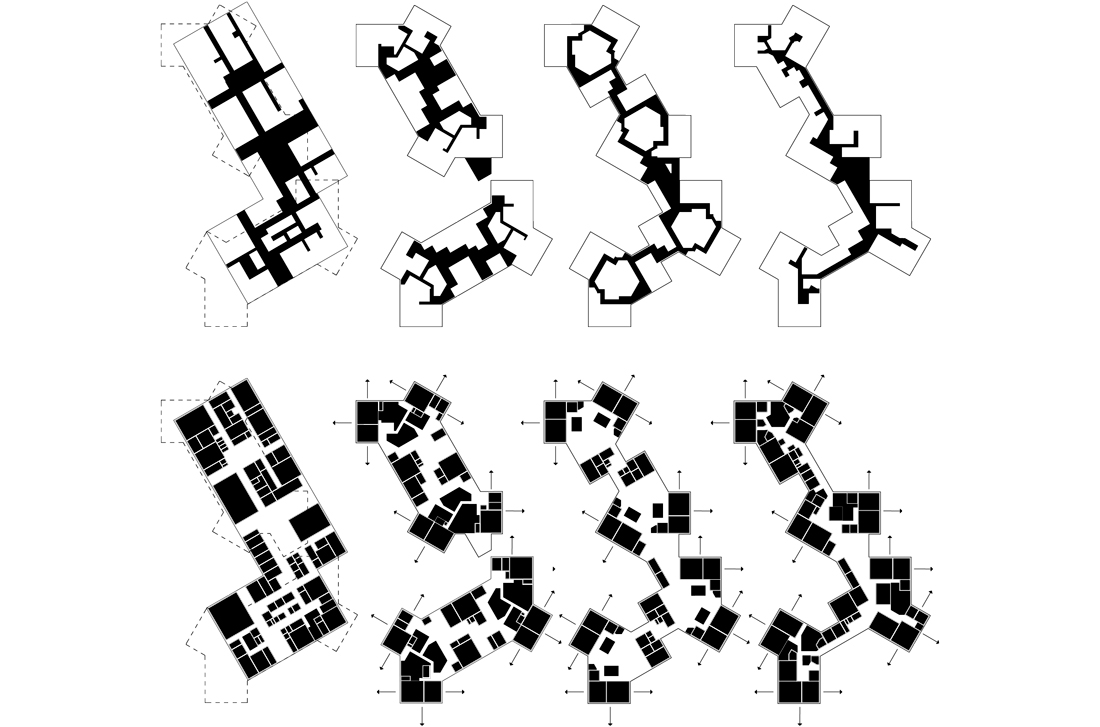 Some common areas offer views out into the surrounding area, while others, which form internal balconies immediately adjacent to each primary school classroom, are oriented towards the heart of the atrium.

All the classrooms are organized diagonally, while each of the star-shaped learning clusters is illuminated by daylight from every direction.

The articulation of the volume, the position of the “jumping” windows and the design of the playhouses in the kindergarten group rooms, and the fitted furniture in the classrooms ensure that the building complex, with its alternating horizontal and vertical larch wood slatted façade, is a lively home away from home for the pupils and teachers of Berresgasse Educational Campus.