Beigang Township is the epicenter for the Taiwanese worship of Mazu, a Chinese sea goddess. Therefore, the Beigang Chao-Tien Temple for Mazu and its surroundings form a core area with local historical significance. However, Beigang, like other cities in the western plain of Taiwan, faces the same suburban sprawl, exacerbated by disorderly building development resulting from the lack of a cohesive planning guidance. The project site itself is located at the northwestern corner of the 90-year-old Bei-Chen Elementary School campus, which sits right on the axis of the sprawling expansion. 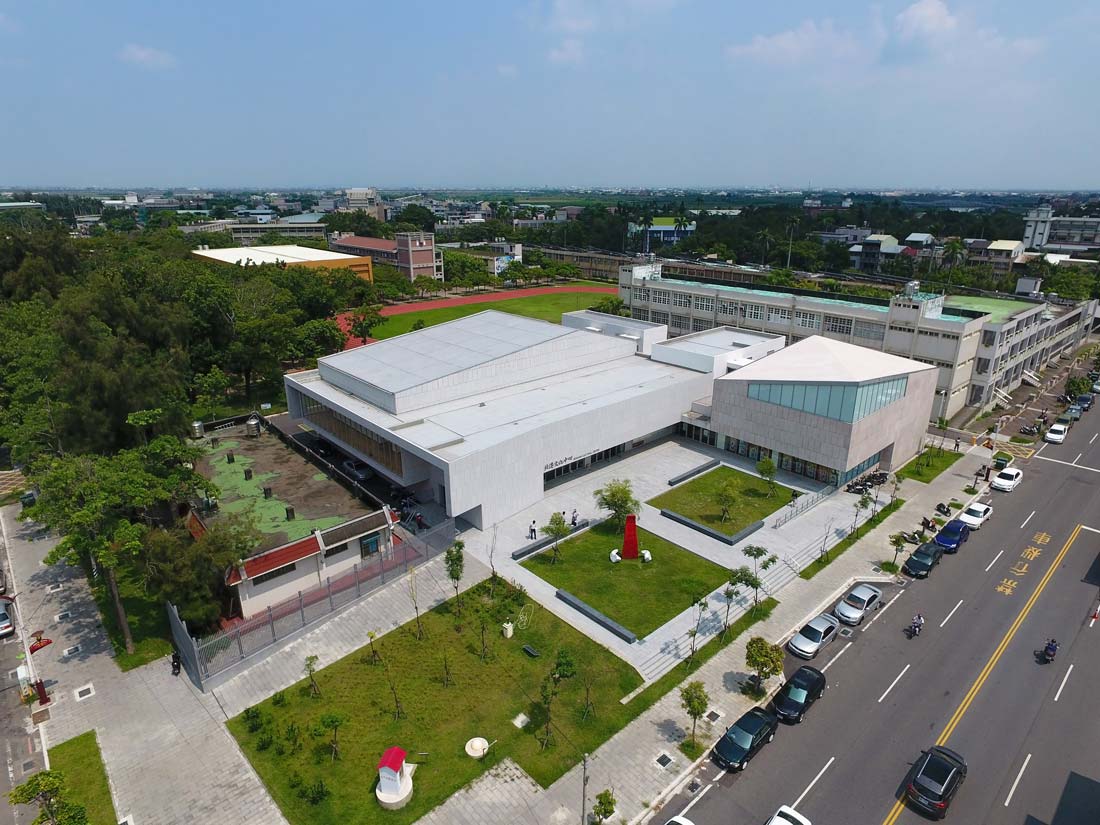 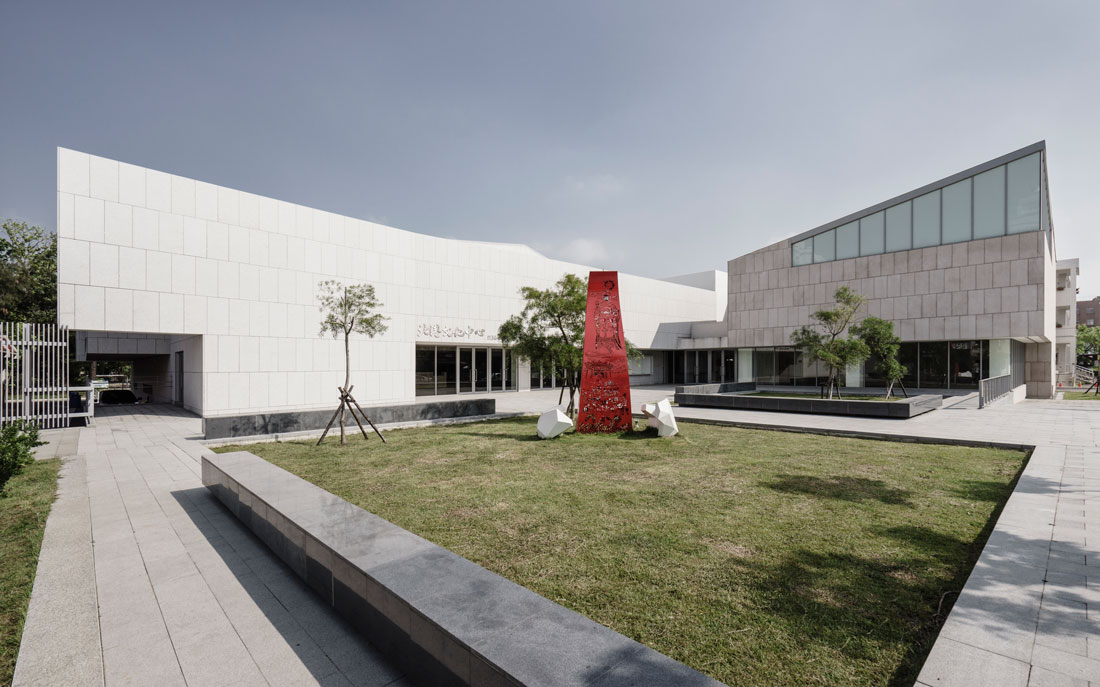 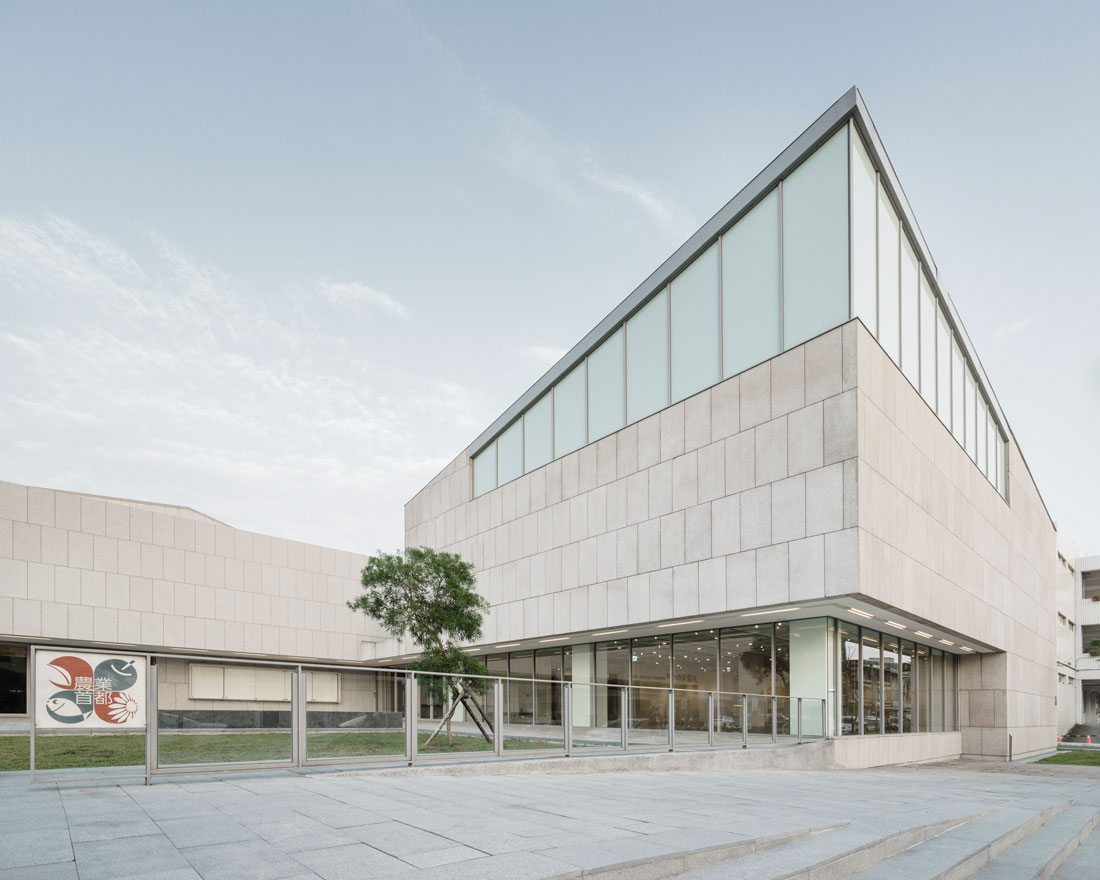 The program of the new Beigang Cultural Center is mainly composed of a 400-seat auditorium, a permanent exhibition space and a special exhibition space. Because of its significant volume and its role as a civic building, the culture center can anchor the adjacent streets and establish an important city block. The L-shaped building is further divided into two volumes, responding to the adjacent street intersection. 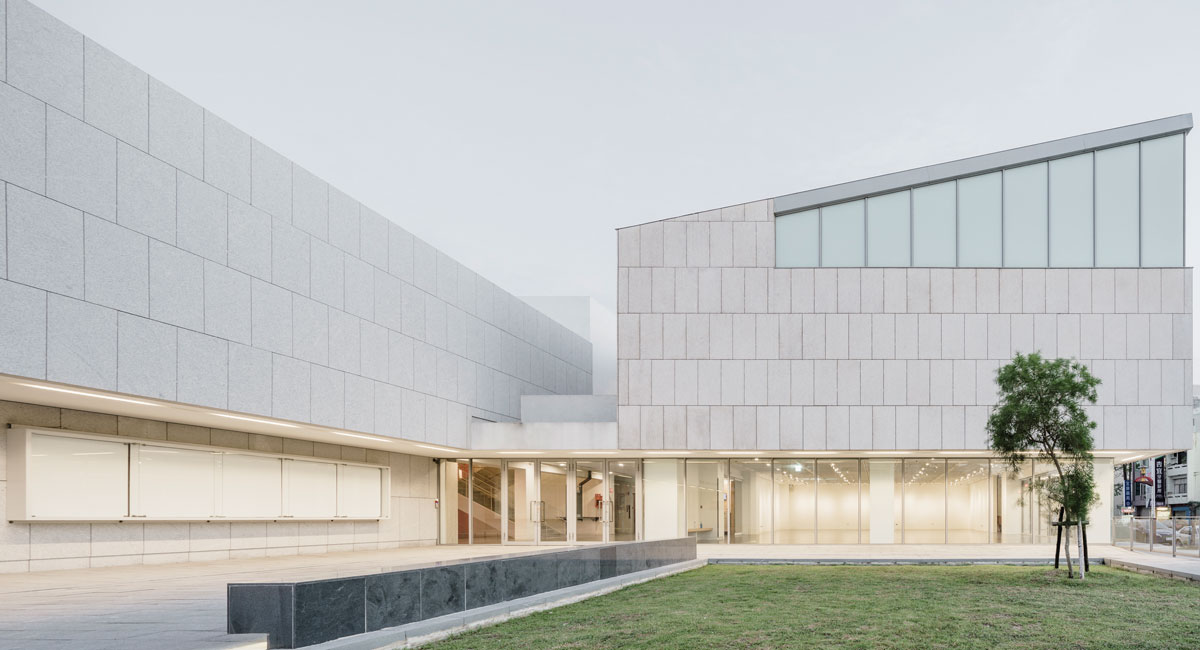 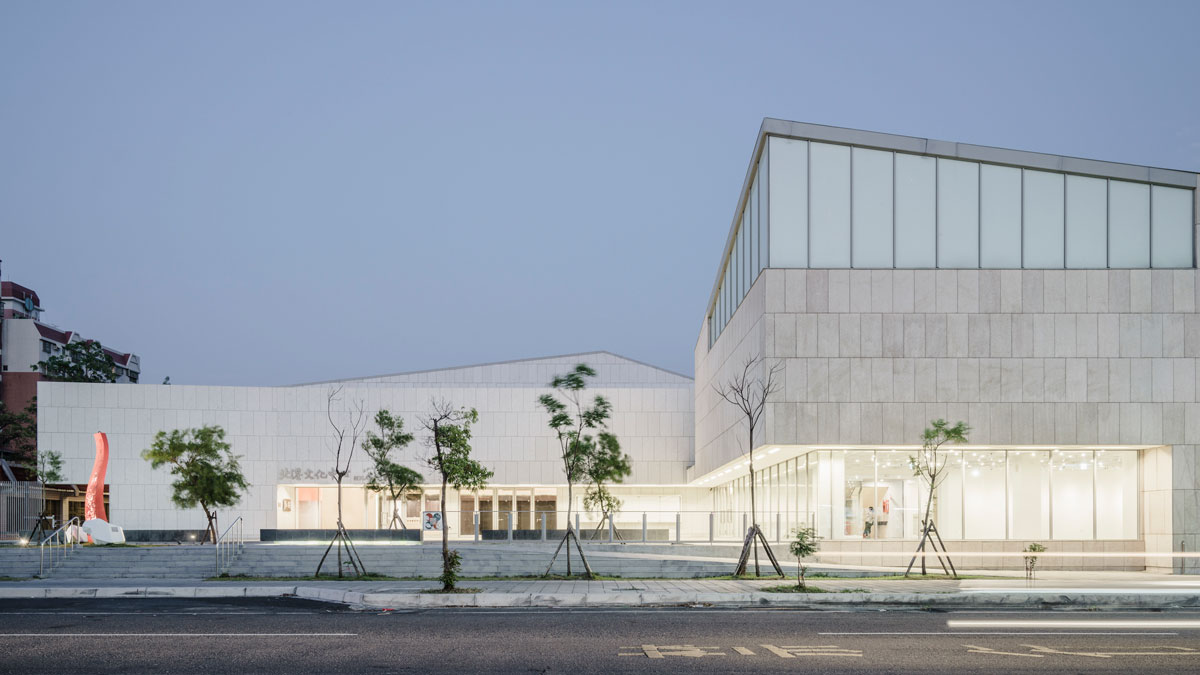 The larger auditorium volume and the smaller exhibition hall volume are each sheathed with different types of granite. The top of both volumes is also angled differently to create a dialogue. The roofs are free from rooftop equipment so that the culture center has a clean and refined appearance, which stands out from the surrounding buildings dotted by unsightly equipment and bland building covers. In addition, the plaza in front of the building varies in elevation, and elongated stairs form the linear edge along the paved walkway next to the adjacent street. Unique in Taiwanese cities, this site planning creates a subtle grading variance and generates a dynamic visual effect that changes according to the viewing angle. 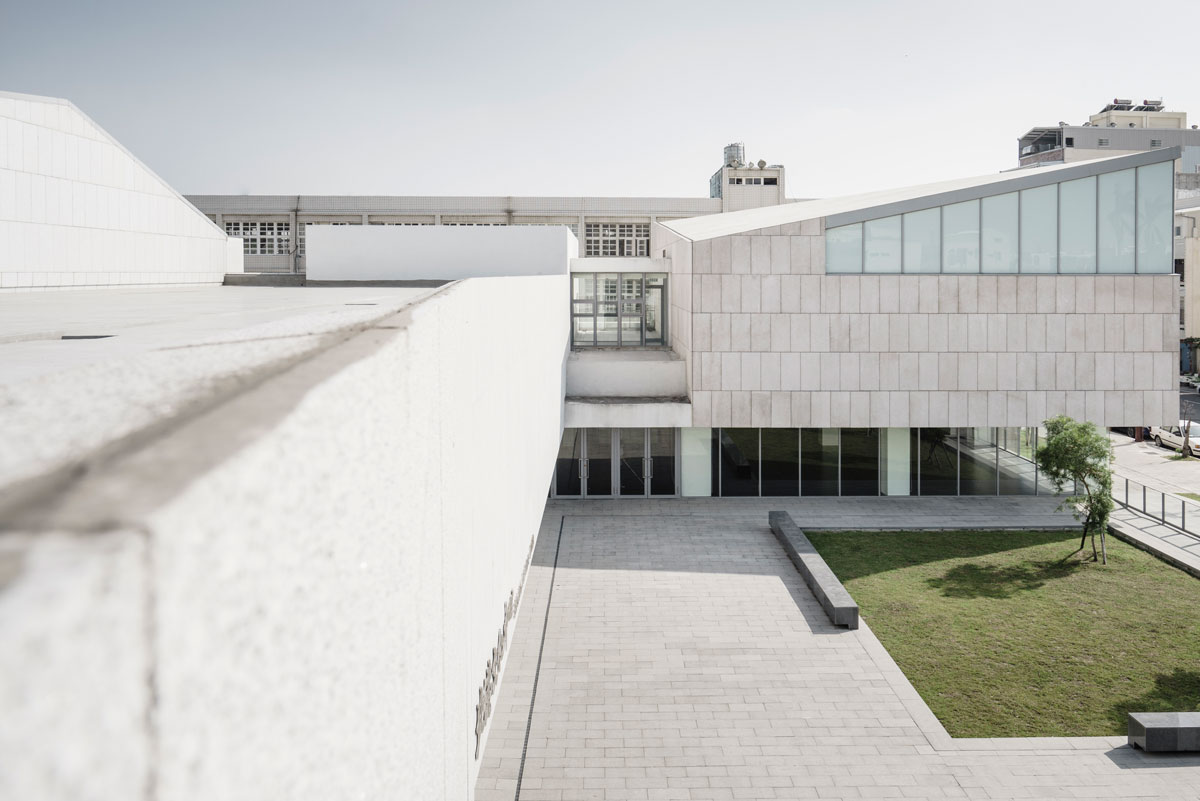 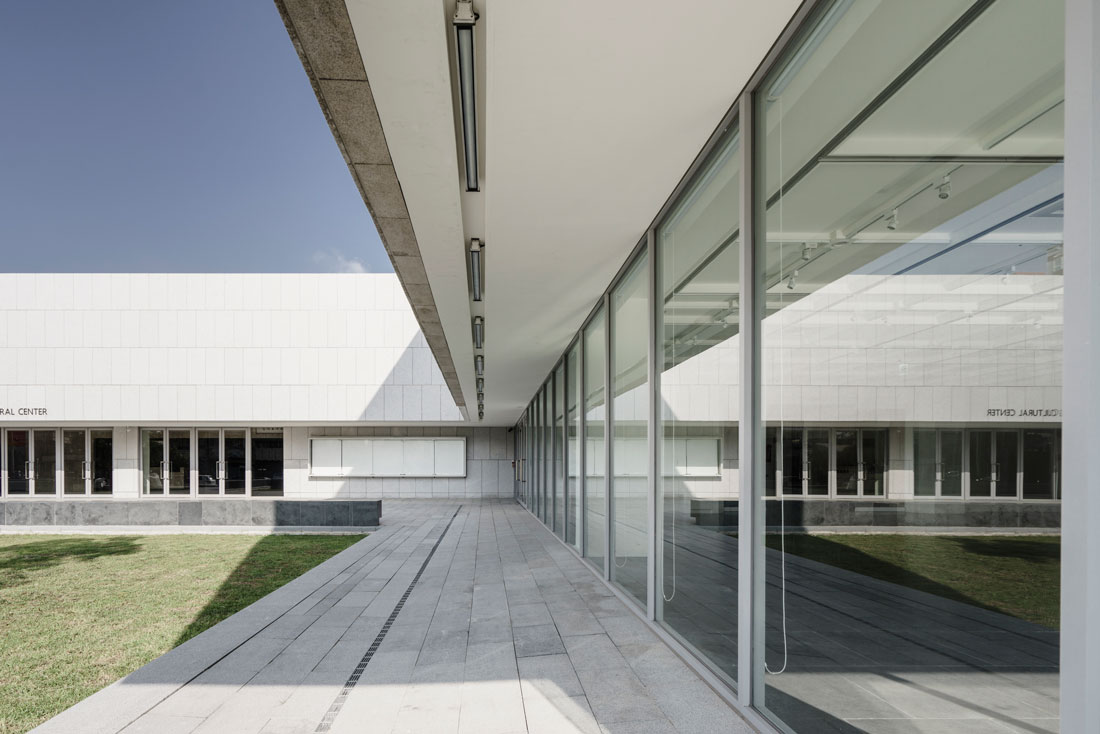 The interior spatial flow and the transparency created by the ground-touching ribbon glass windows stand in contrast with the substantial opaque building volumes above. In fact, the transparency below the opaque volumes becomes a datum line that links the opaque volumes and lifts them together as though they were floating above the plaza. The linear lobby extends circulation along the longitudinal axis of the building. It joins with the stairs at the center turning node of the L-shaped plan and unites the stacked exhibition spaces with the secondary entrance in a dynamic way. 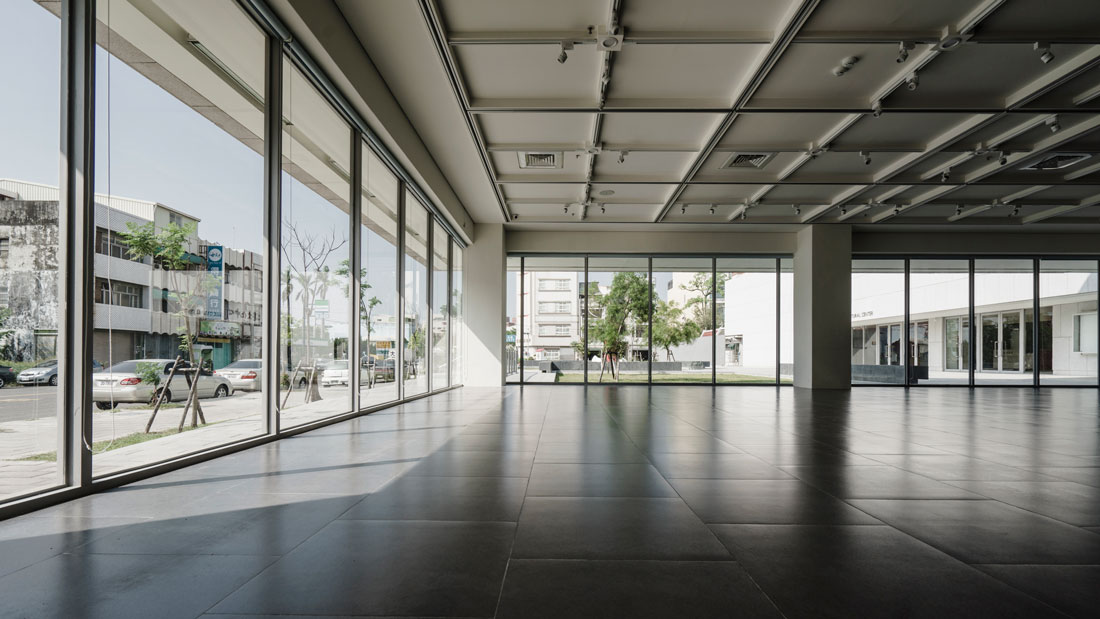 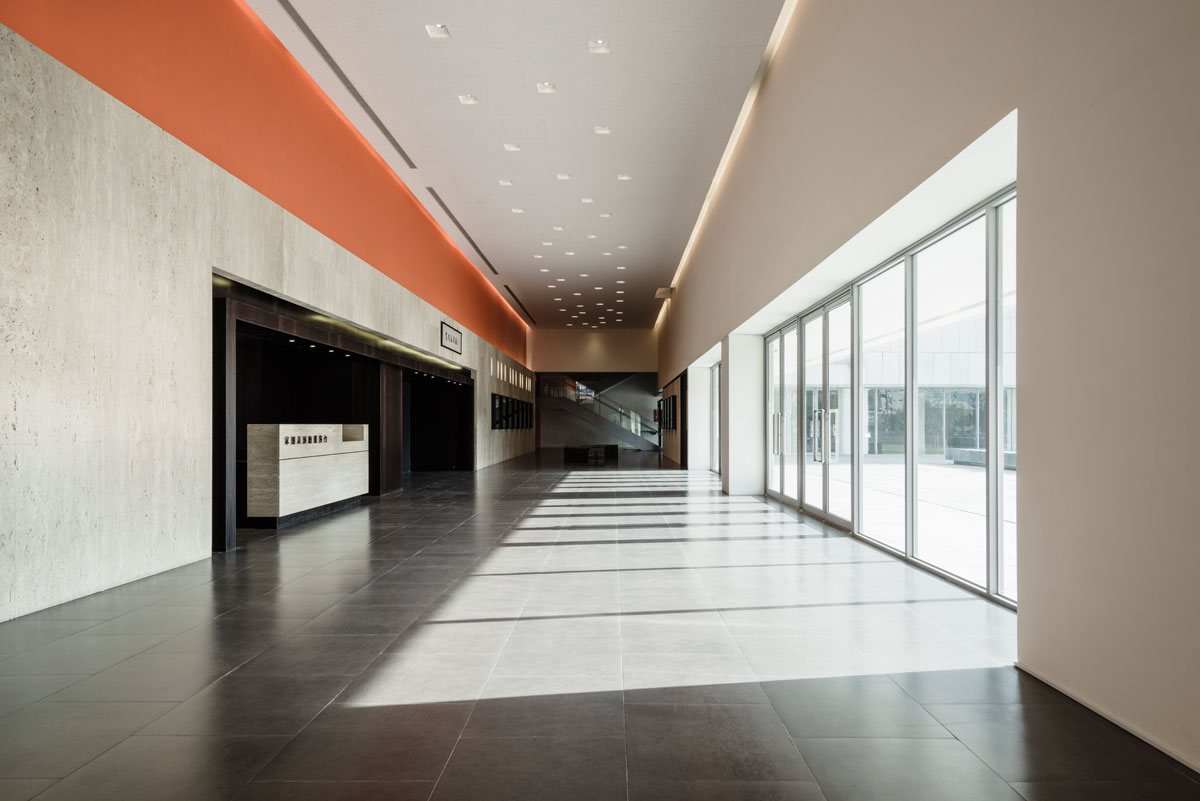 The stairs at the other end of the lobby lead to the overhanging second floor foyer. This blurs the inside-outside spatial relationship, as the movement inside the transparent foyer is also displayed to the public until the circulation of visitors is returned inward toward the auditorium. The interior of the auditorium is shaped into a pure sound chamber, in what is known as the shoebox typology, instead of relying on individually placed sound reflectors. The angled roof above the stage and inclined perforated wood acoustic panels flanking the auditorium help to reverberate the sound properly and eliminate standing sound waves. The conditioned air is distributed through vents located underneath the auditorium seats so that energy efficiency is achieved while the main air conditioning equipment can be located below the auditorium instead of on the rooftop, freeing up the rooflines to convey the building form. 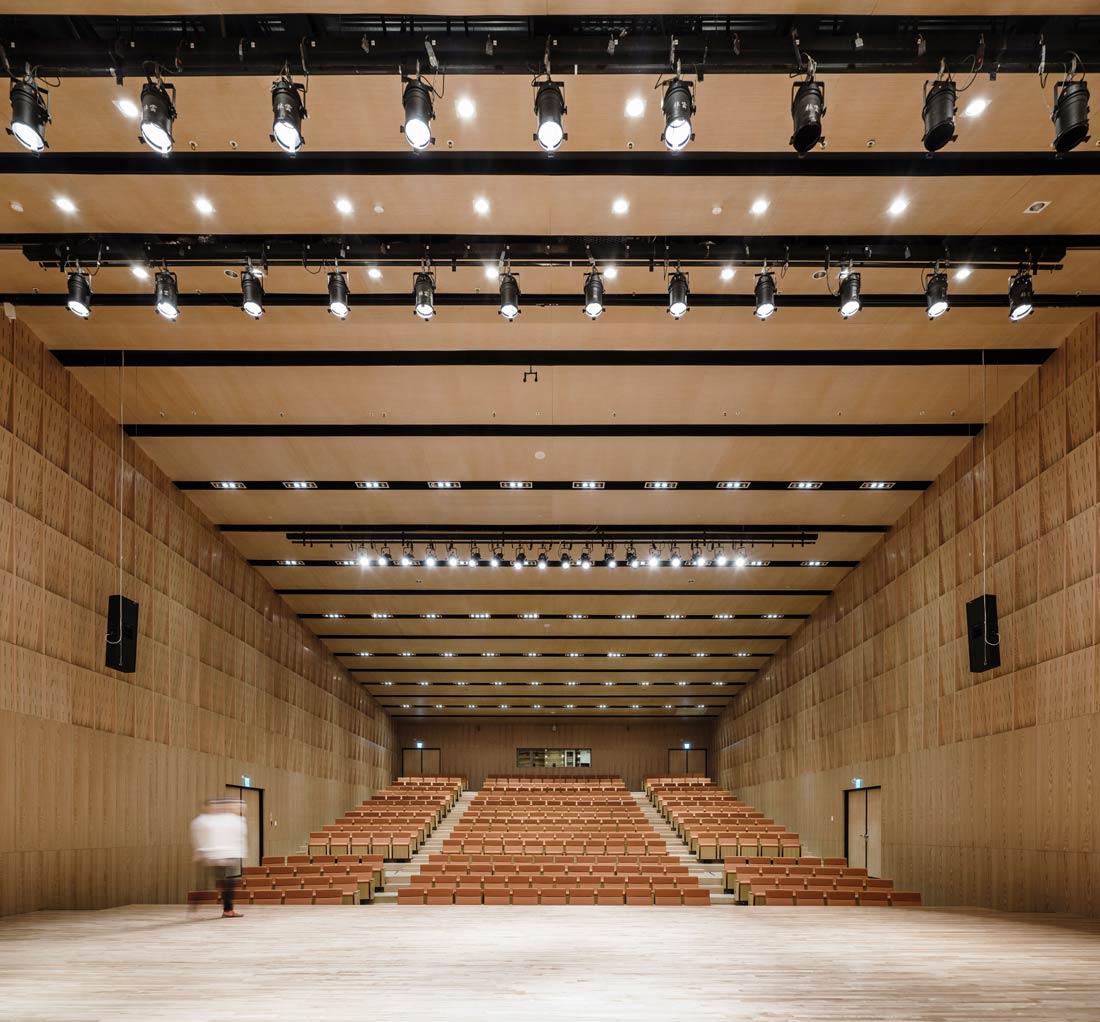 « Designers and recycling
National Kaohsiung Center for the Arts »