One year after the national lockdown in response to the COVID-19 pandemic and still far from re-establishing the usual urban pulse, it is worth stopping to observe some aspects in the transformation of the behavior of cities during the days of stricter confinement. Beginning on March 14, 2020, only essential services were allowed to continue operating: food stores, pharmacies and health facilities were, during a period of eight weeks, part of the few shutters that were raised at ground level in the city. The new “stay at home” routine radically changed urban performance with an unprecedented reduction of mobility and a radical shift of social circles into the digital scene.

Fig. 1 Activities at street level in Barcelona before and after mid-March 2020

Barcelona switched from hosting 2.3 million people on March 13, 2020 to 1.6 million two days after. Once most of the workplaces were closed, the urban debate during the confinement focused on households and streets. The drastic reduction of vehicle movements highlighted the unprecedented quality of air – both in terms of pollution and visibility – and an explosion of greenery in the city.

Fig. 3 Series of Voronoi diagrams showing the population assigned to each service unit: the thicker the line, the higher the density of inhabitants.

In only a few hours, the city went from being a hyper-connected metropolis to exclusively depending on proximity services. In this dystopian scenario, the disposition of commerce became as much or even more important than in the active city itself, because it turned the “added value” that commerce represents into an “essential value” in the exceptional context. From this perspective, it’s worth investigating to what extent citizens were able to find minimum services in the immediate vicinity of their place of residence.

Fig. 4 Places with the highest population allocation for each category of essential services representation of the upper quintile of Fig. 3 in relation to the urban fabric.

Available open data [1] lets us compare the differences in quantity, variety and proximity of the six essential remaining open services during the very first lockdown in Barcelona: market halls, bakeries, supermarkets, grocery stores, pharmacies and healthcare facilities. A series of maps characterizes different aspects from a wider perspective: the intensity of use to which each service is subjected; latent logics in their physical proximity; and alterations in regular urban fabrics due to a combination of activities and population distribution. 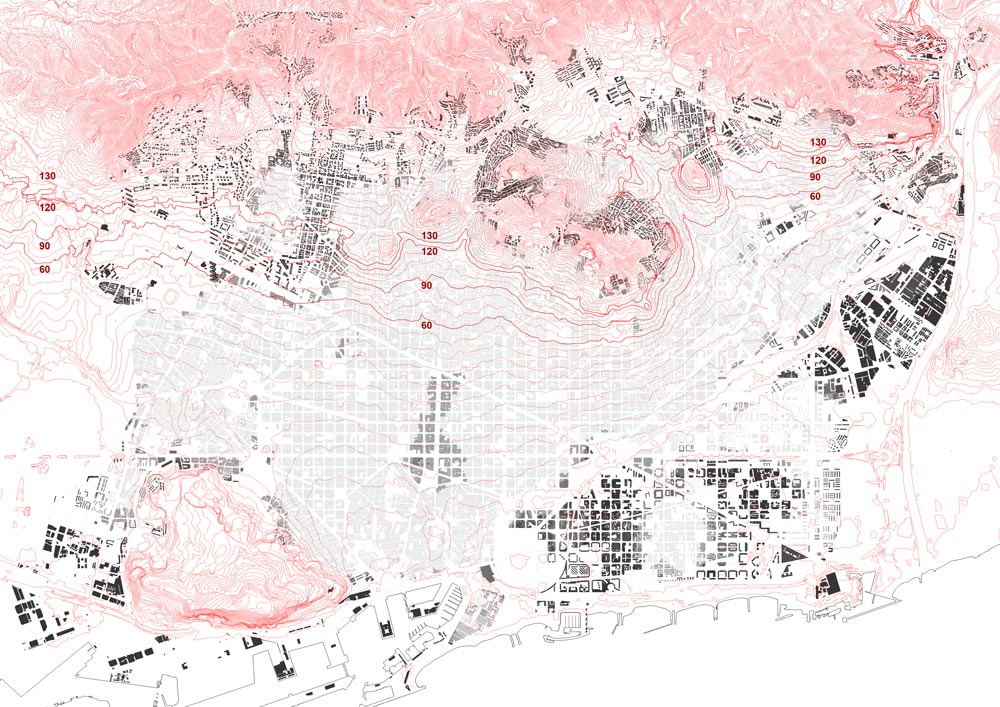 Fig. 6 Areas with the fewest number of essential services (excluding facilities) in relation to the topography. Overlap of the lowest quintile of each of the categories resulting from Fig. 5 resulting in three different intensities: areas in which the minimum intensity coincides in four of the services (black); in three of the services (dark gray); in two of them (light gray). Lines 60, 90 and 130 over the sea are reference limits in different parts of the city regarding the limited concentration of premises, with the controversial exception of the most central area around Passeig de Gràcia.

The research contributes to an understanding of the need for urban mixture, giving clues on the allocation of services and activities, and stressing to what extent urban proximity has become an important concept in the urban agenda for a more livable city. At the same time, the maps illustrate the uniqueness of the case of Barcelona due to the compactness of the urban fabric and the contiguity of activities.

1. Seen through the lens of minimum distance, supermarkets and pharmacies share the same territorial distribution criteria: they are, on average, less than 100 meters in a straight line from any plot in the city. Bakeries or specialized food stores reach a minimum average distance slightly higher than 120 meters.

2. In terms of quantification, each supermarket is used by more than 700 inhabitants while market halls, whose exceptional character is based on their ability to bring together local centralities rather than exclusively supplying food, have an intensity of use more than 60 times greater. Each grocery store – in a theoretical exercise that does not take into account what type of product each specializes in and, therefore, ignores the necessary complementariness between establishments of this category – serves more than 800 inhabitants, while each bakery serves more than 1,000 Barcelonans. Each pharmacy serves more than 1,500 inhabitants, and health care facilities provide an ideal balanced distribution of more than 30,000 Barcelonans per center.

3. The number of premises dedicated to the analyzed activities within the same 400-meter radius provides a reference for understanding further partial data: excluding facilities, industrial buildings, and infrastructure services, each plot in the city has, on average, within a radius of 400 meters, almost 25 supermarkets and almost the same number of grocery stores, more than 17 bakeries, and more than 10 pharmacies. In terms of urban daily services, all the plots in the city have 75 of these basic activities within five-minutes’ walking distance.

4.Beyond the common considerations, hyper-served and under-served areas can also be seen from the maps. Of particular interest is the definition of the areas with the lowest concentration of services, keeping a close relationship with the topographic support, but with notable exceptions such as the area around Passeig de Gràcia and interesting nuances among the hilly peripheral areas.

To sum up, the series of maps portrays the minimum daily urban mixture parameters, aiming to contribute to the contemporary debate on mixed-uses, self-sufficiency and proximity in urban environments through the case study of Barcelona.

This text is part of an ongoing investigation, part of the results of which can be read at Crosas, Carles; Gómez-Escoda, Eulàlia. 2020. "Mapping Food and Health Premises in Barcelona. An Approach to Logics of Distribution and Proximity of Essential Urban Services", ISPRS International Journal of Geo-Information 9, n. 12: 746. Special Issue Measuring, Mapping, Modelling, and Visualization of Cities. https://doi.org/10.3390/ijgi9120746