The pavilion was built for a local socio-cultural festival. It was a temporary structure to shelter an idol which was the focus of this festival. Set amidst a carnival atmosphere, the constant flux of people was a factor considered while conceptualizing its design. A notion of continuous movement was its guiding principle. 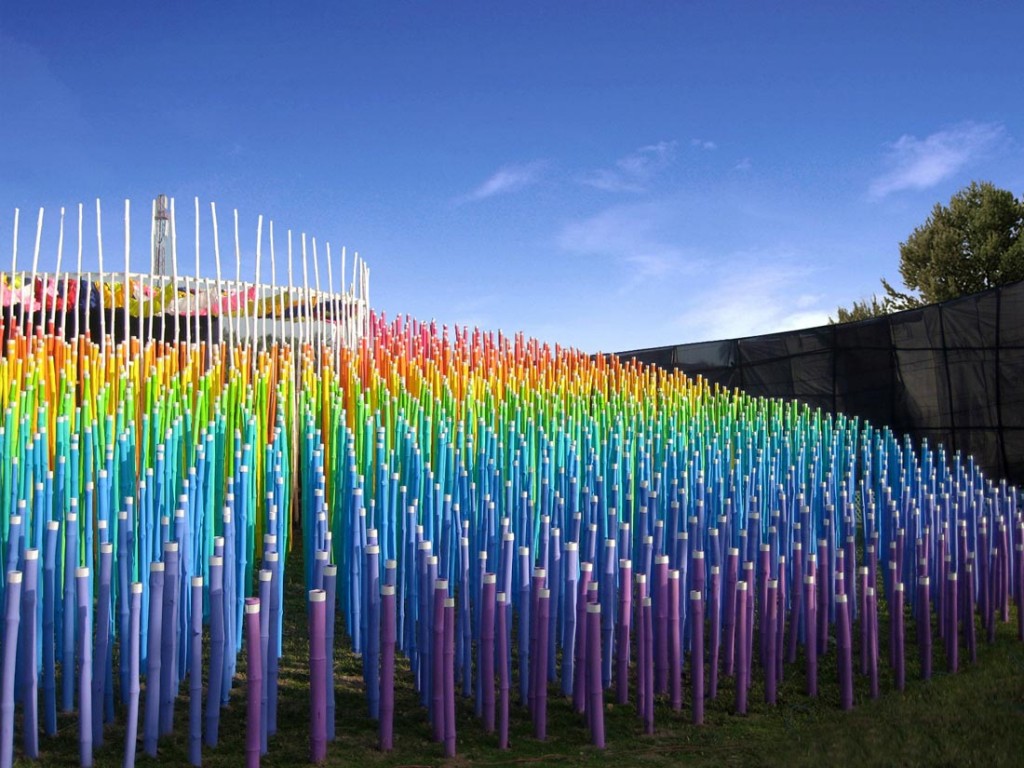 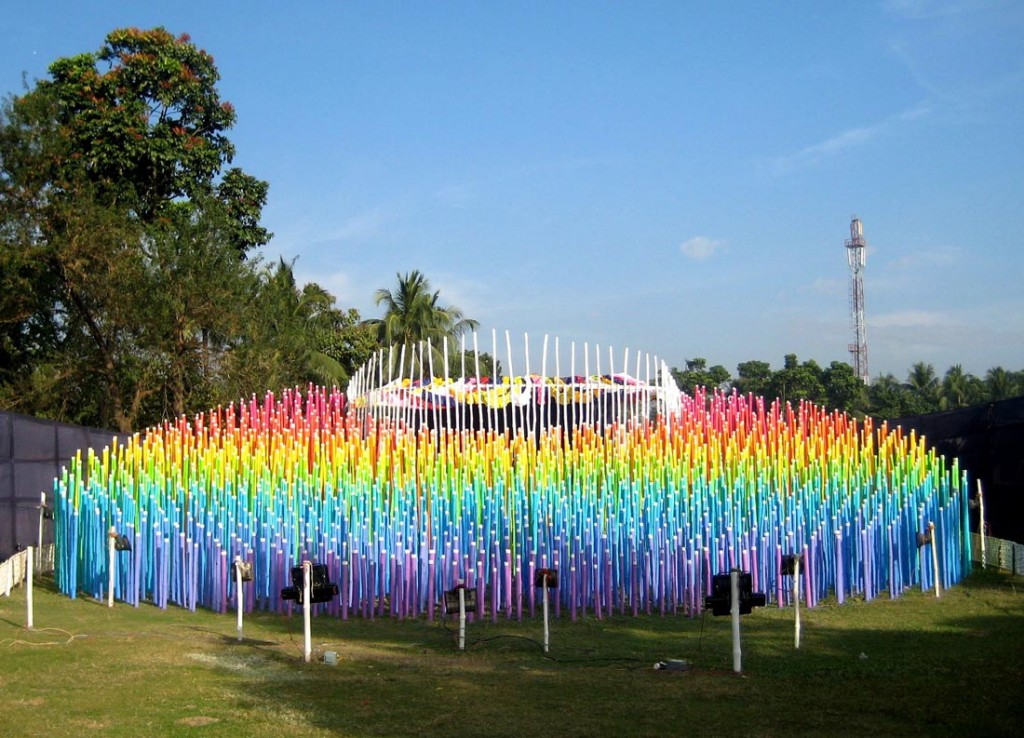 The initial idea was to create a composition of light and color to convey implied movement while creating playfulness. The use of colored LED lights was considered to achieve this. However, being a community project, funds were limited while volunteers were aplenty. Due to a lack of budget, an innovative alternative was developed to achieve a similar effect. 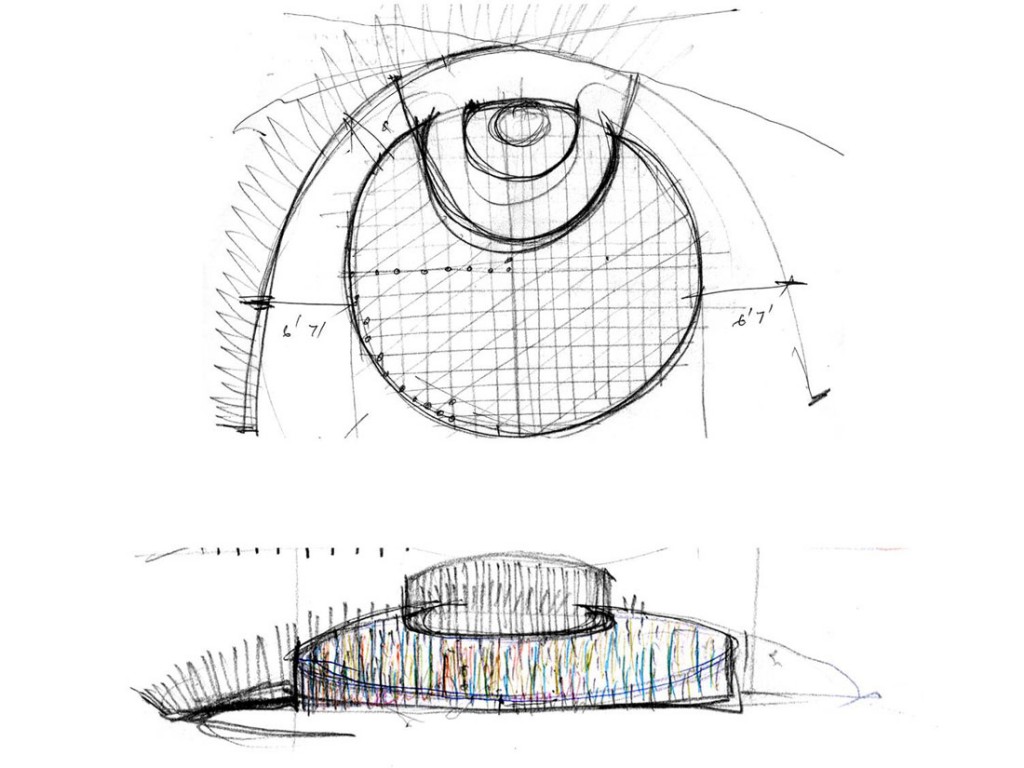 A rising circular volume was visualized, emphasizing the focal idol while directing movement around the pavilion in a manner to create a journey of ever-changing views. Gliding sight-lines across a colored spectrum were envisioned for the desired effect of movement among, between and above the elements of the pavilion. 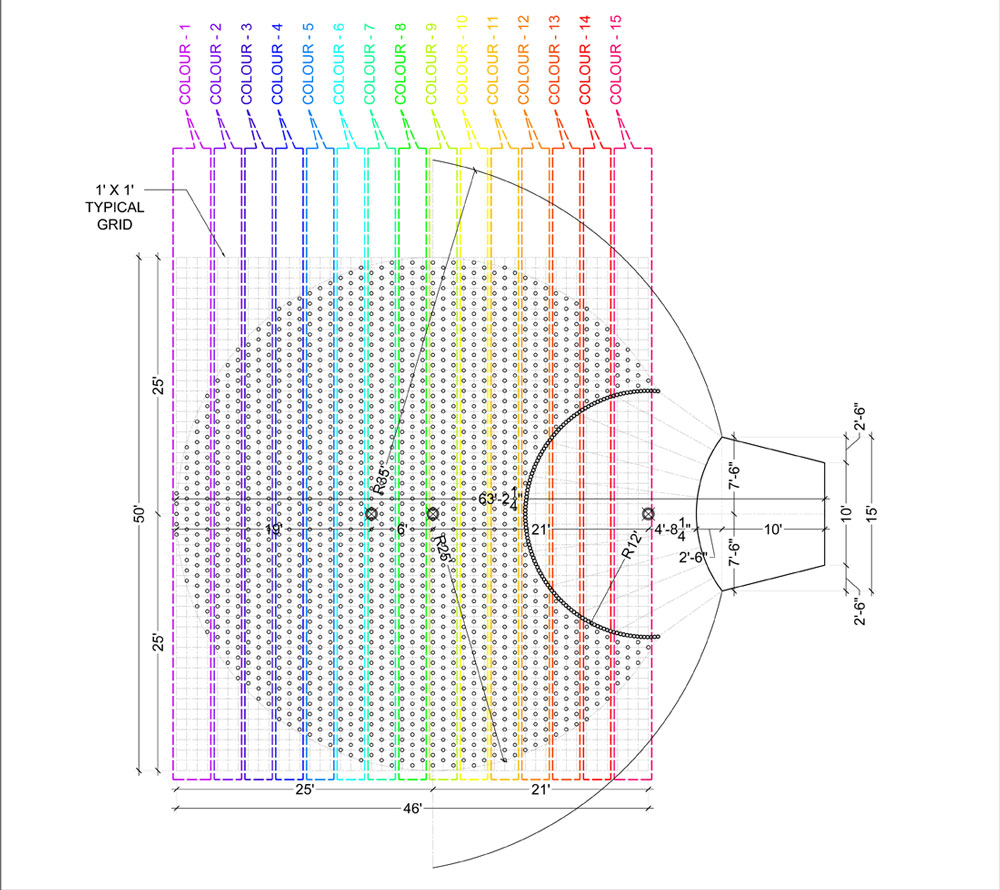 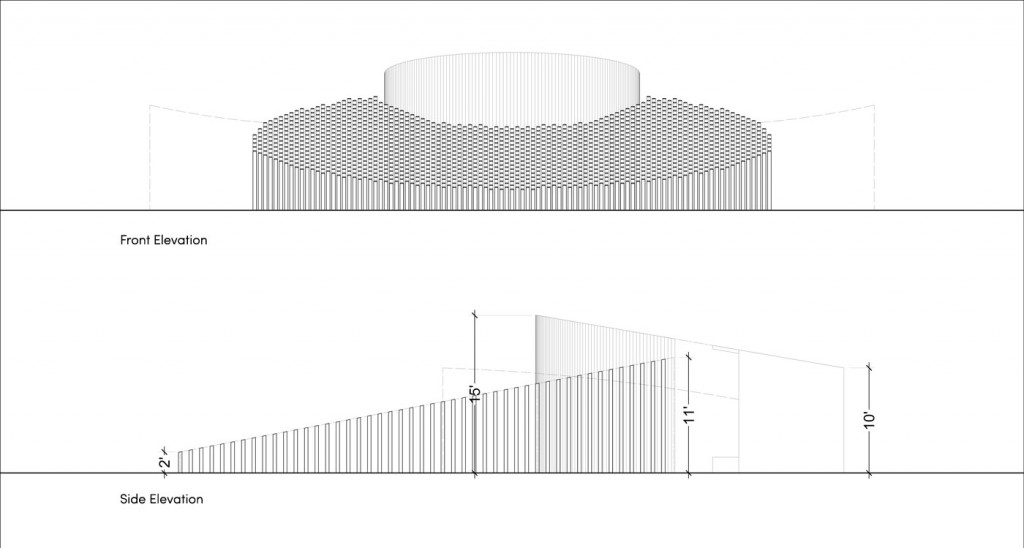 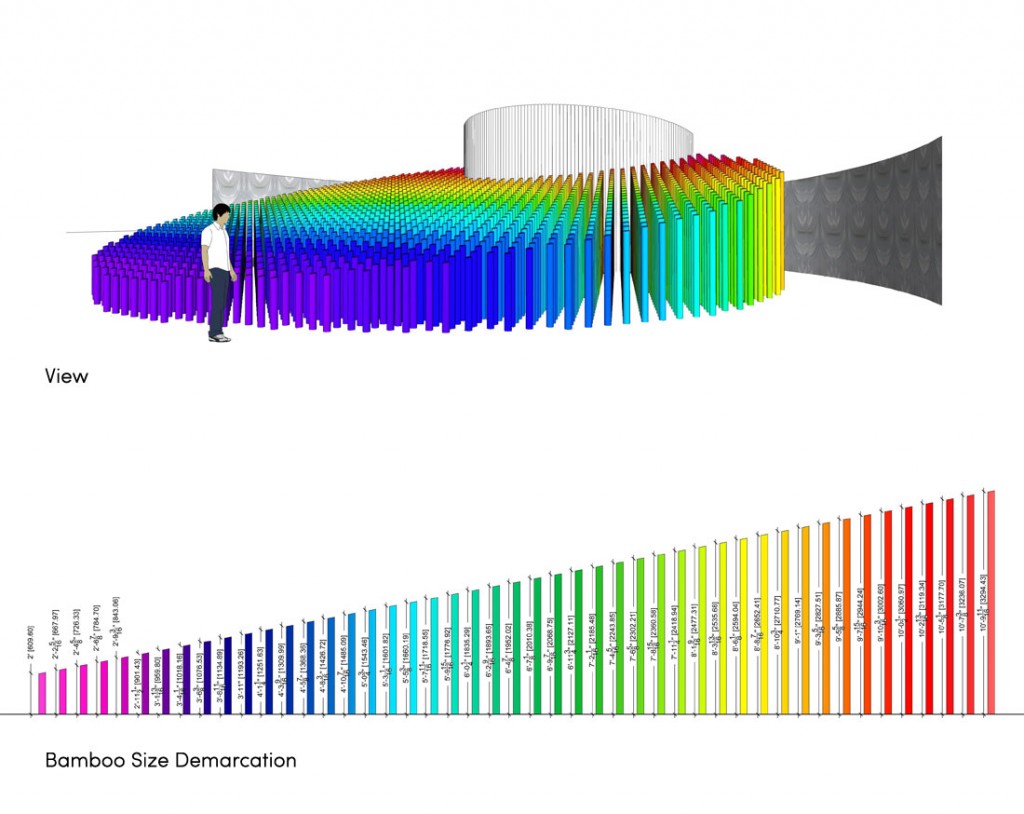 Locally available bamboo cut to specific lengths was used to create a gradually rising volume. These were rooted to the ground in a regular grid and were painted in spectral hues. Close to 1800 bamboo poles were arranged according to their lengths ranging from 2 feet to 15 feet. These were manually sorted and grouped lengthwise. Each group was then assigned one of 15 colors that was painted over each pole. 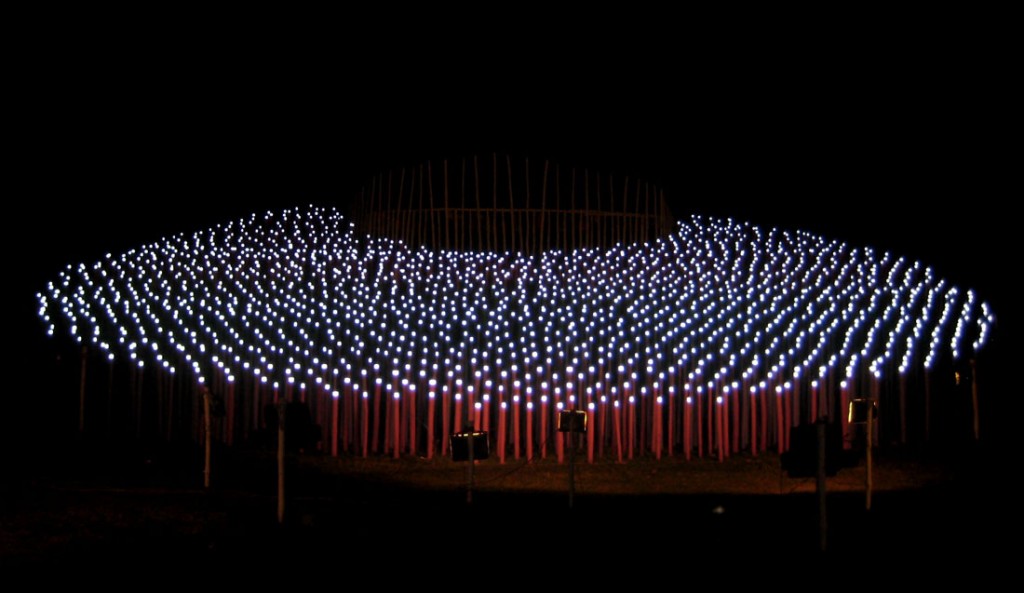 Each bamboo pole was meticulously catalogued based on its length, color and position. These were carefully tagged and stowed awaiting their sequential fixing into the ground. Retro-reflective vinyl stickers were pasted at the top of each bamboo. Coupled with hired halogen lights, the stickers gave the pavilion the desired glowing effect. 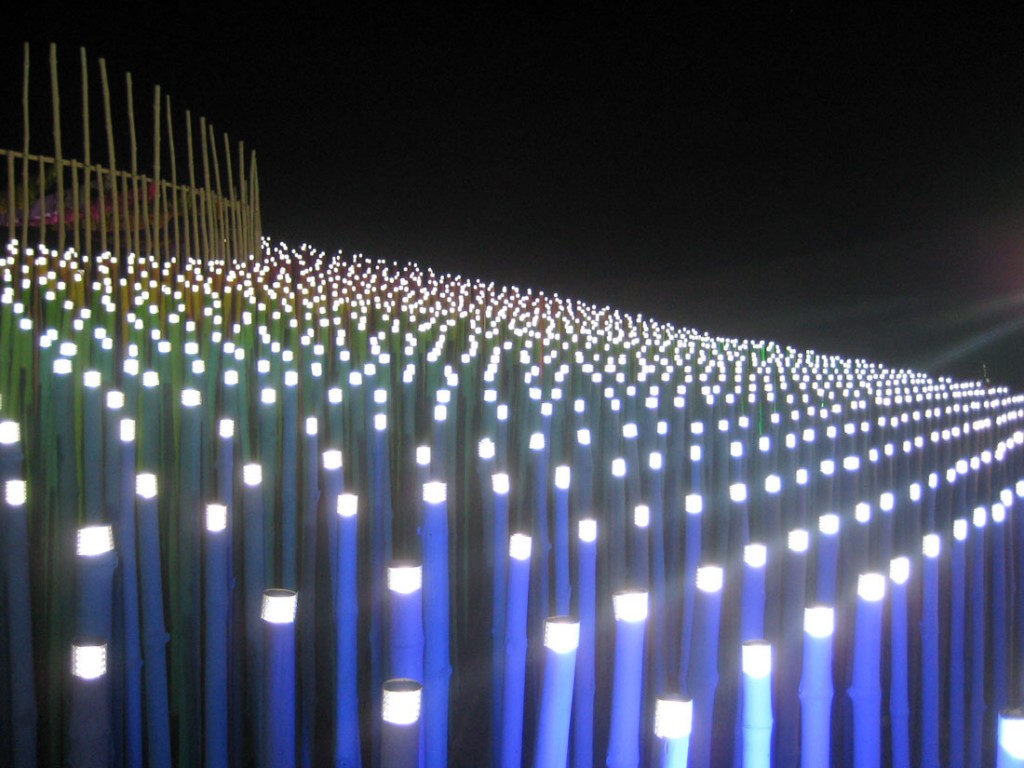 The final outcome was one of bright playful colors in a celebratory atmosphere by day and added unconventional festive lighting by night. 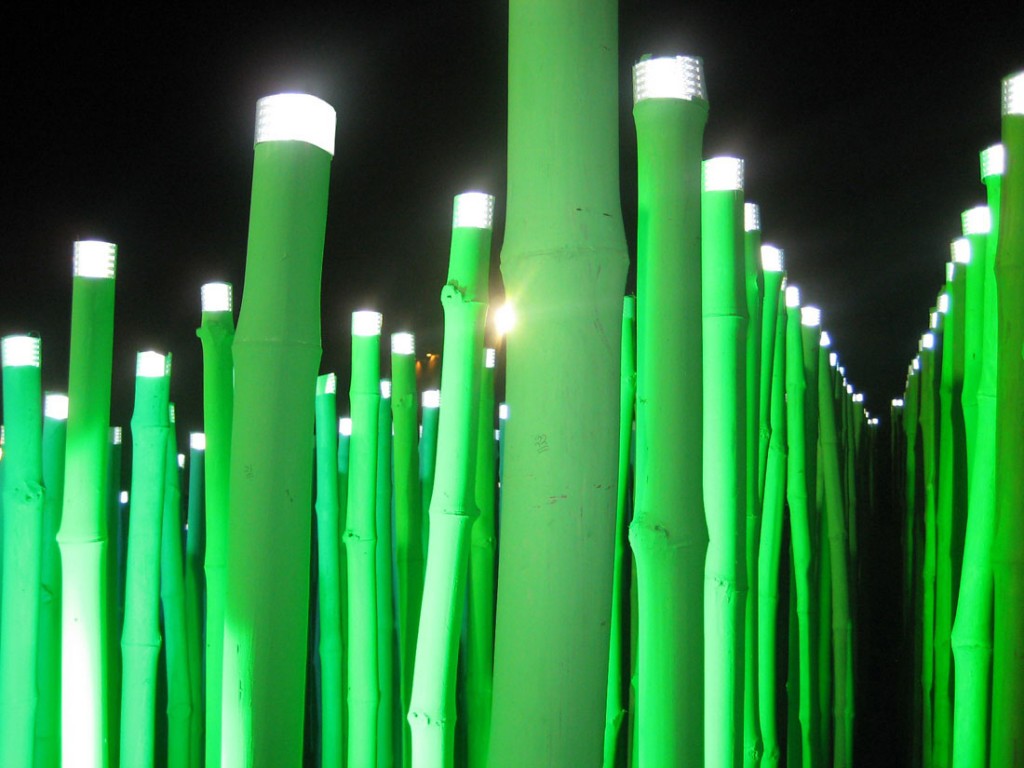 Bamboo, being durable, bio-degradable and locally available, was a strategic choice of material for the project. The poles were planned for reuse after the festival and were carefully re-catalogued and stored for the future. They have currently found use as decorative fencing for a football field in the locality.