In just three years (2011-2014), China consumed more cement than the US during the last century. Most of those people who now live in concrete housing blocks used to live in houses made of natural materials. This trend has been happening all over the world. Alternatives are needed to reduce CO2 emissions. 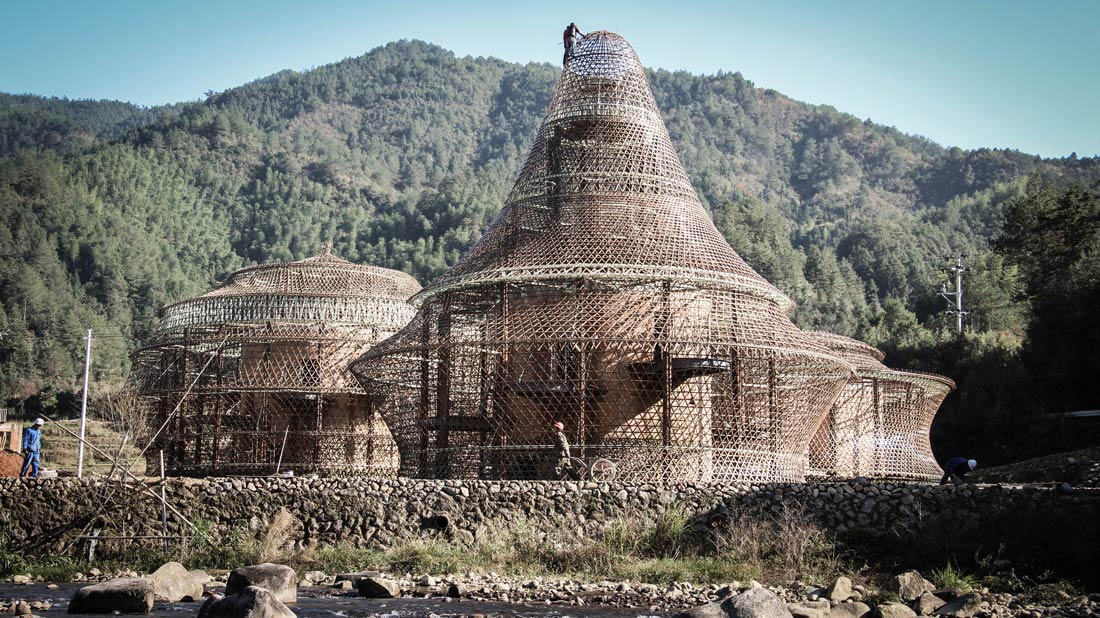 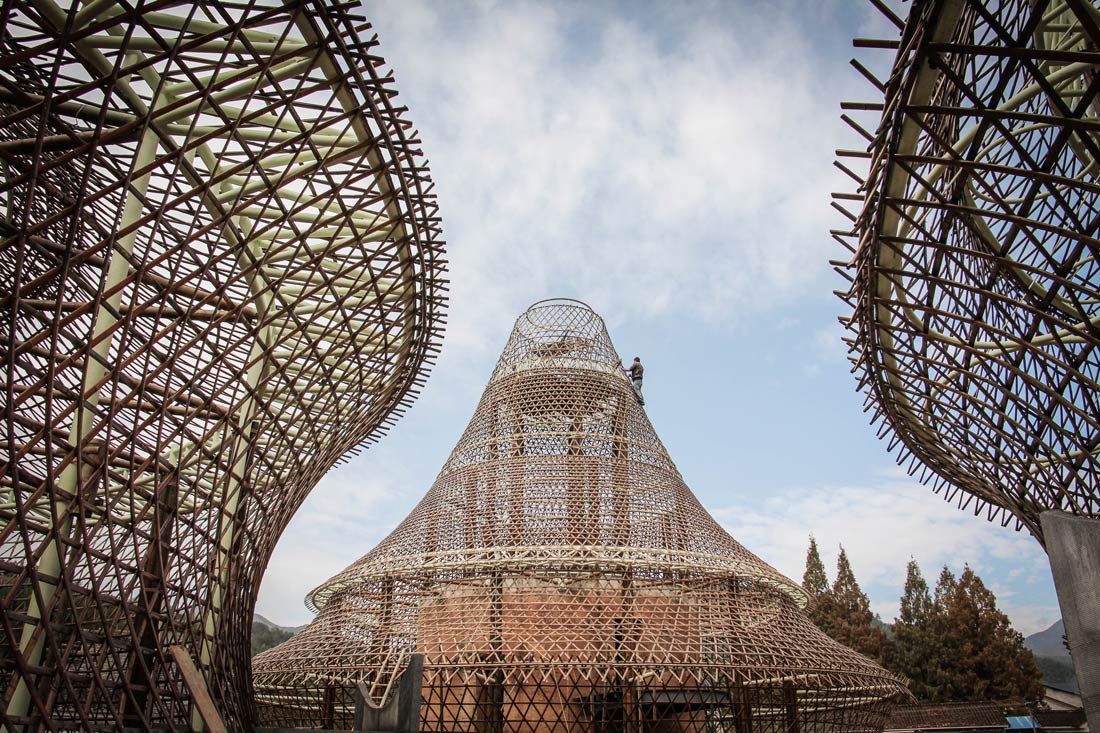 These three hostels show that traditional, natural materials can be used in contemporary ways: unlike many traditional houses that hide mud behind fake façades, this project celebrates the beauty of natural materials. Using non-standardized, local materials will lead to more diversity in urban and rural regions, foster fair economics – through the creation of jobs – and preserve our planet’s ecosystem. 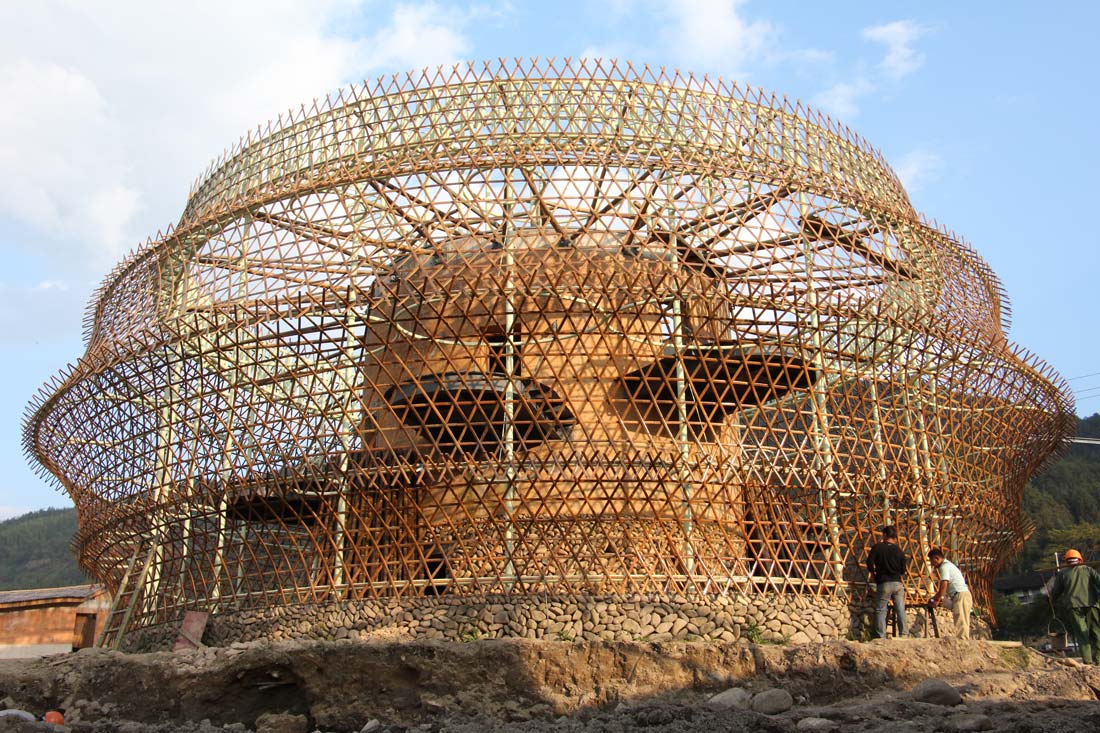 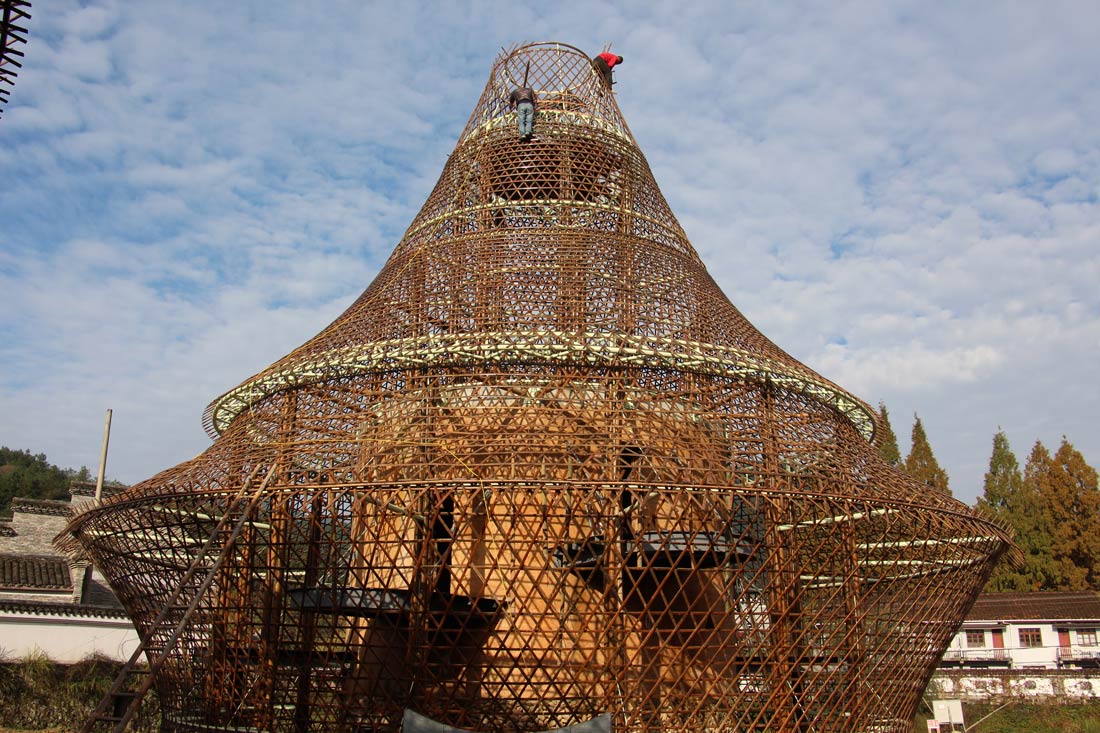 This project was part of the Longquan International Biennale, which focused on building with bamboo; in that context, 12 architects were invited to build permanent structures.

Our studio was commissioned for two hostels and one guest house. The structure of the hostels is formed using a core made of stones and rammed earth. The core hosts all facility units and the stairs. Attached to it are the sleeping units. The latter are designed like Chinese lampshades that glow in the night. Around them is an expressive structure made from woven bamboo. 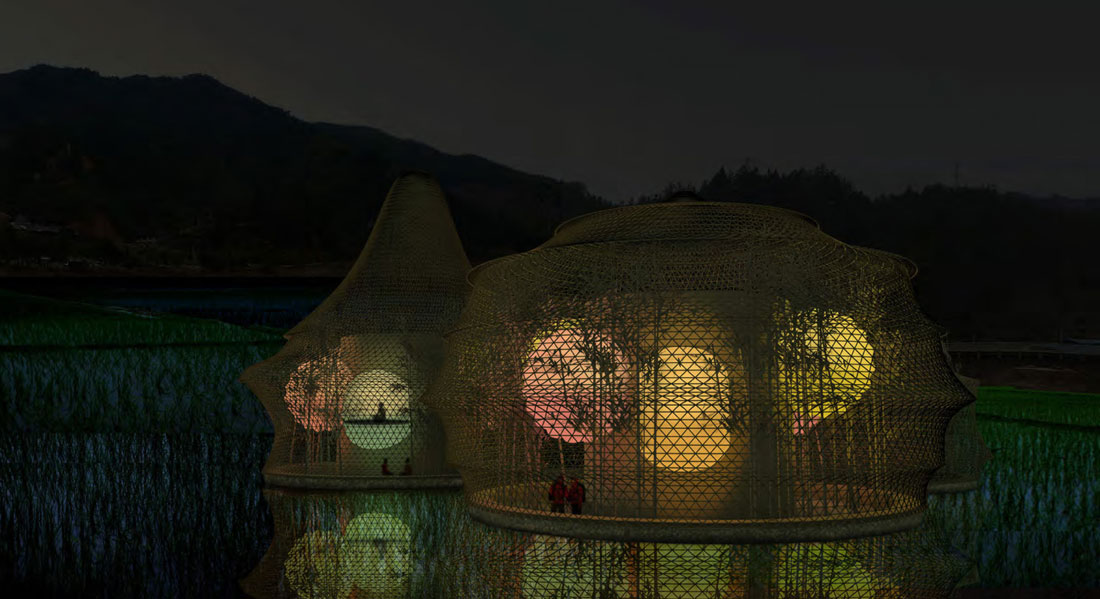 In general, we tend to think that sustainability is about scarcity, but the nature of nature is not limitation. These great building materials, bamboo and mud, are there in abundance. They make sense from an economic as well as an ecological perspective, while they are also healthy for people and the planet. These buildings are a statement that sustainability is about quality of life and the celebration of nature’s vast resources. 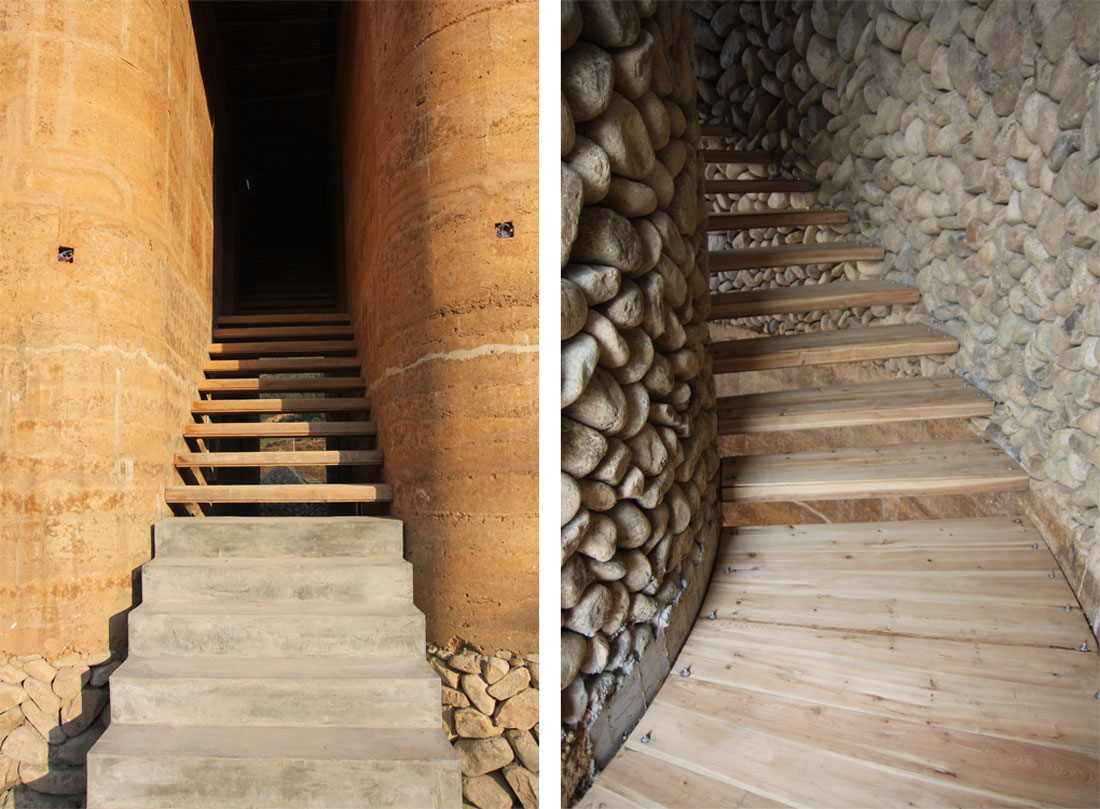 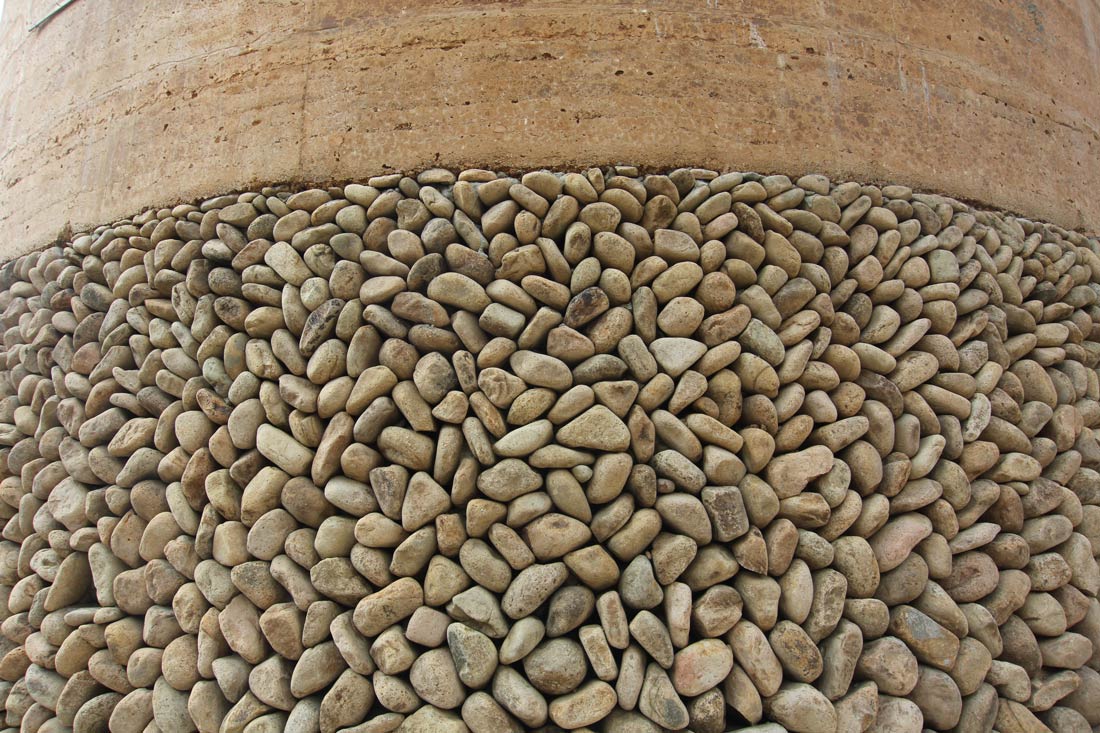 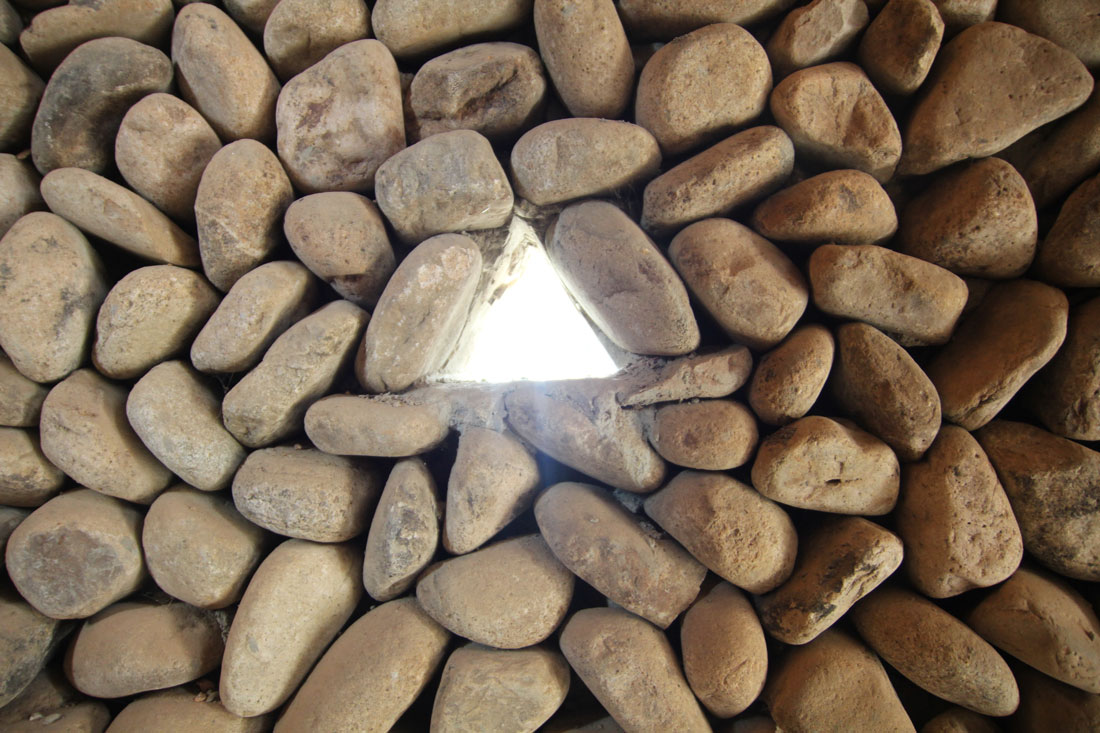 The applied techniques of bamboo weaving and rammed earth are labor intensive; they challenge the skills of local craftsmen and leave the biggest share of the profit with the community. 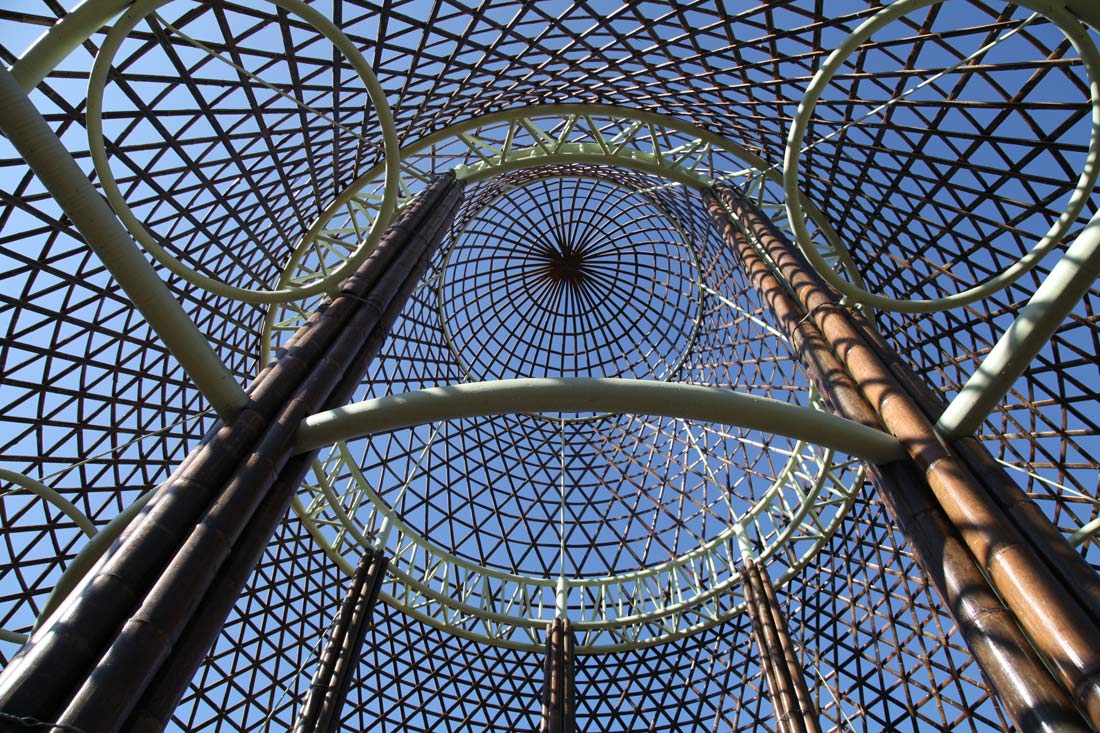 This project aims to re-connect with the authenticity of cultural goods derived from immanent material characteristics, like the bending strength of bamboo, and with China’s rich tradition in craftsmanship, like basket weaving. One of the cultural identities of Baoxi is tied to ceramic vessels, which provided the inspiration for the shapes. 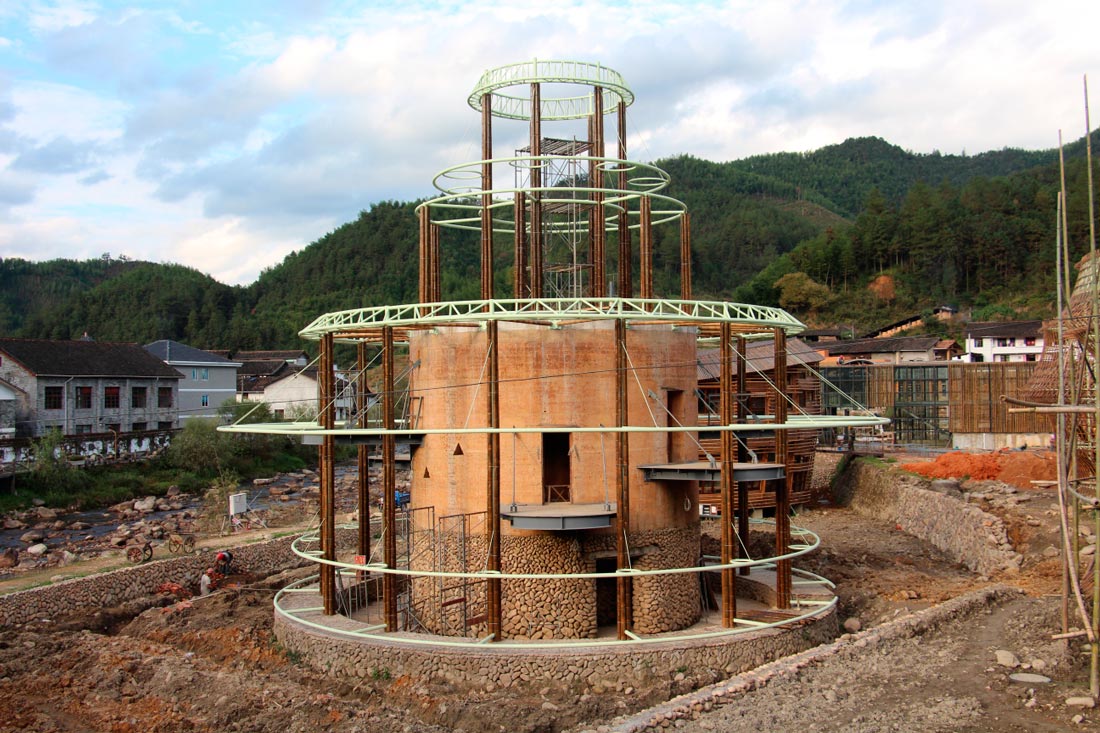 The energy system is based on direct and ‘archaic’ sources like fire and sun, wind, shade, plants and the concept of minimizing conditioned spaces. Rather than making a huge effort in both money and resources for controlling the climate of the entire volume of the hostels, only the core – which houses the utility rooms – and the cocoons are thermally controlled. They are protected from the rain and have heating or cooling options on a very low-tech level. Fire is used as a heat source through an effective oven that also heats warm water for the showers, supported by solar collectors, while creating a communicative atmosphere in the common rooms. 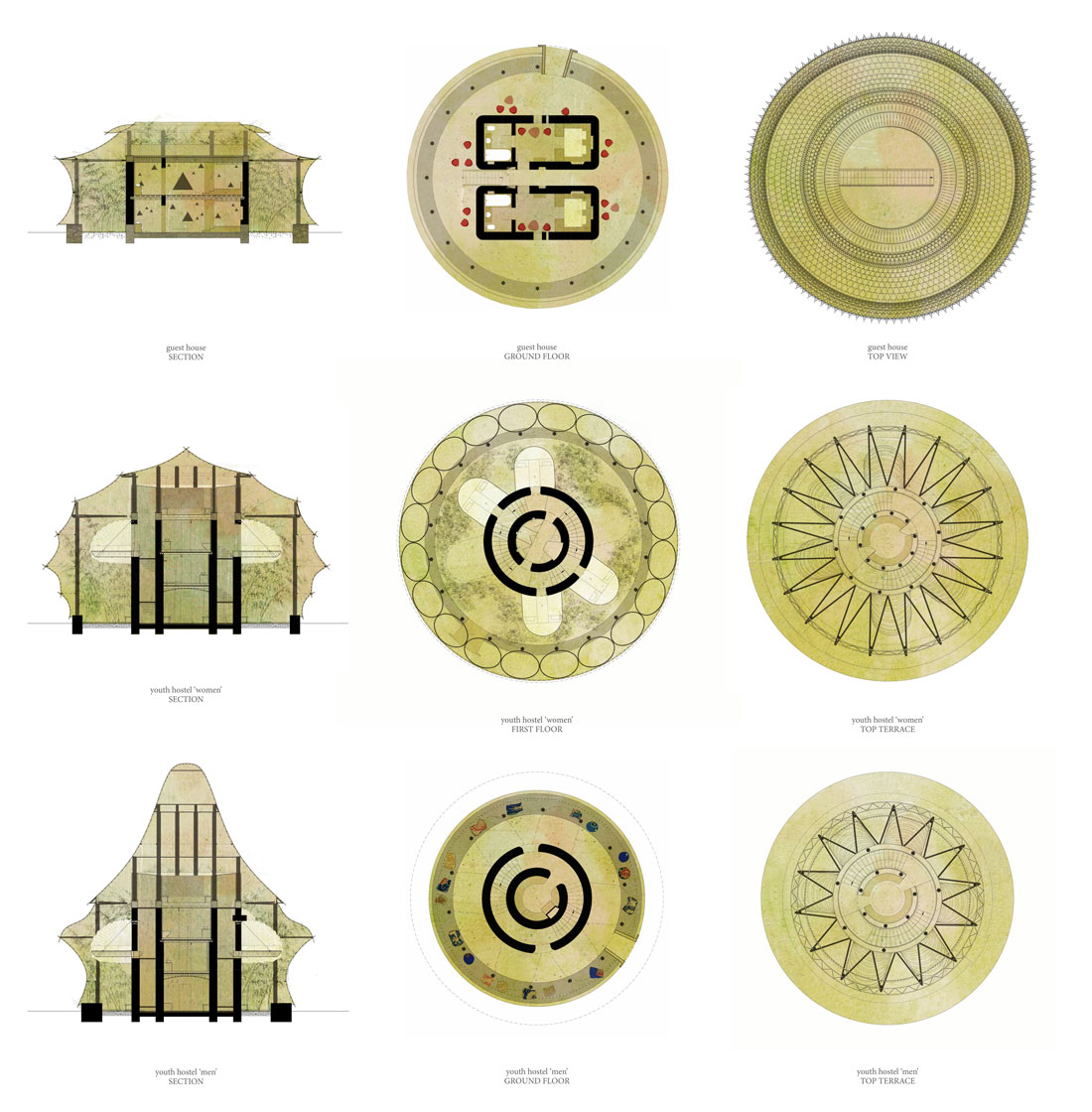 With our planet’s limited resources, we can’t provide 7 billion people with an appropriate habitat made only of industrialized materials. The use of natural materials is vital in order to provide for sustainable and fair development. This project can act as a model for building simply but sensibly and believing in the ‘charming power’ which lies in the authenticity of natural materials. 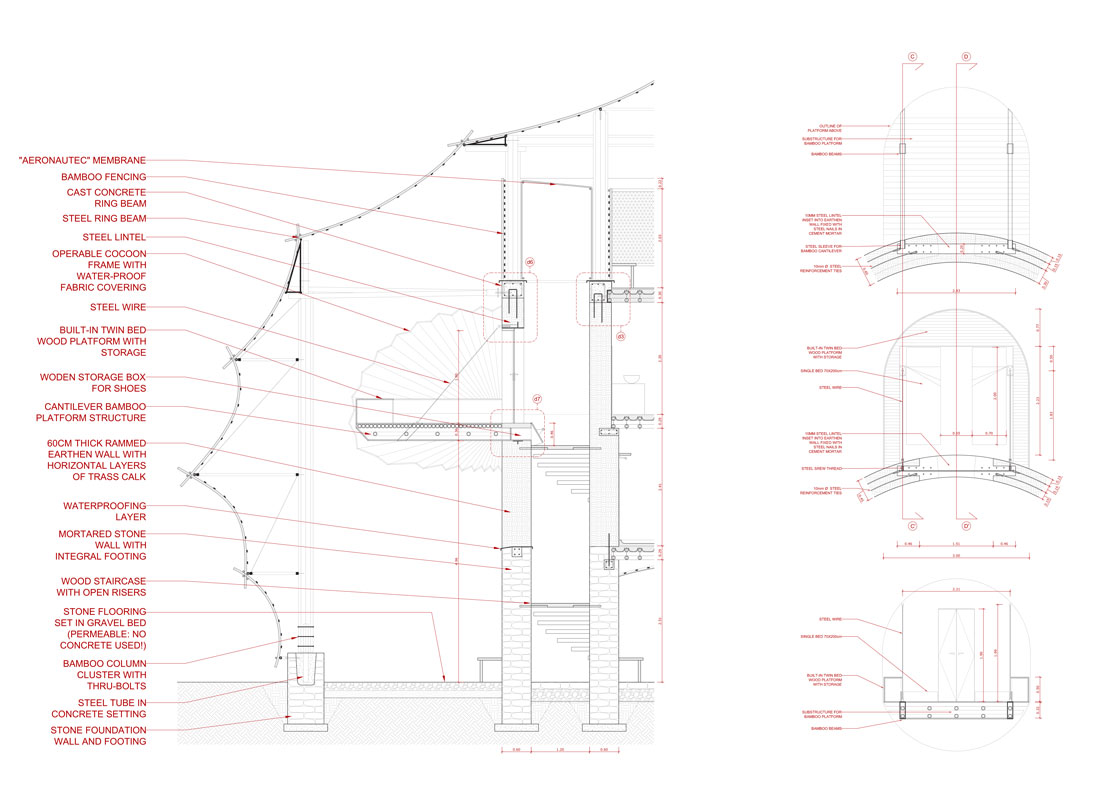