The Baakenpark is the green center of the eastern HafenCity. The 1.6 hectare peninsula, artificially created with sand from the Elbe River, is located in the middle of the former harbor basin of Baakenhafen, which is characterized by linear edges, steel banks and stone promenades. With its wild shoreline, green embankments that run right up to the water, and its characteristic topography, the park forms an atmospheric counterpoint to its surroundings: a park that invites visitors to explore and only unfolds when walking through it; a park with a something to offer for all visitors, with lively meeting points, wide meadows and playgrounds, but also with quieter, isolated places. 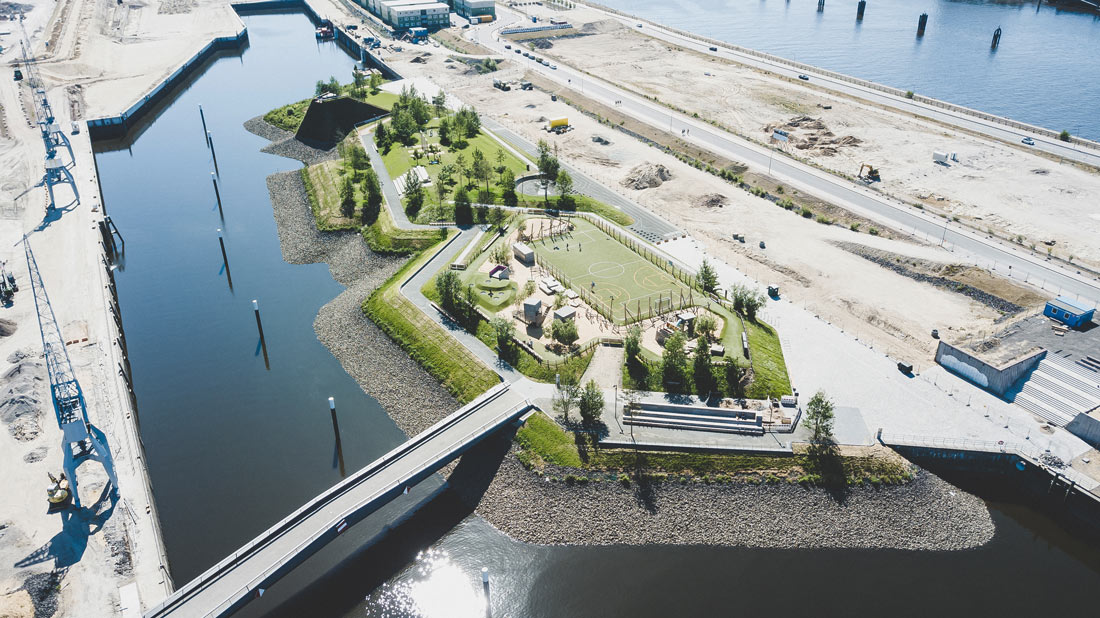 Baakenpark has a remarkable topography with several plateaus of different heights. The highest peak at the eastern end of the peninsula is the 15-meter-high Himmelsberg, a panoramic point visible from afar. When exploring the park, visitors are offered surprising shifts in perspective and varied insights and views. As a green space, the park offers recreation with a variety of sports installations, play areas and recreation possibilities, and it is an optical-aesthetic point of reference in the middle of the harbor basin. 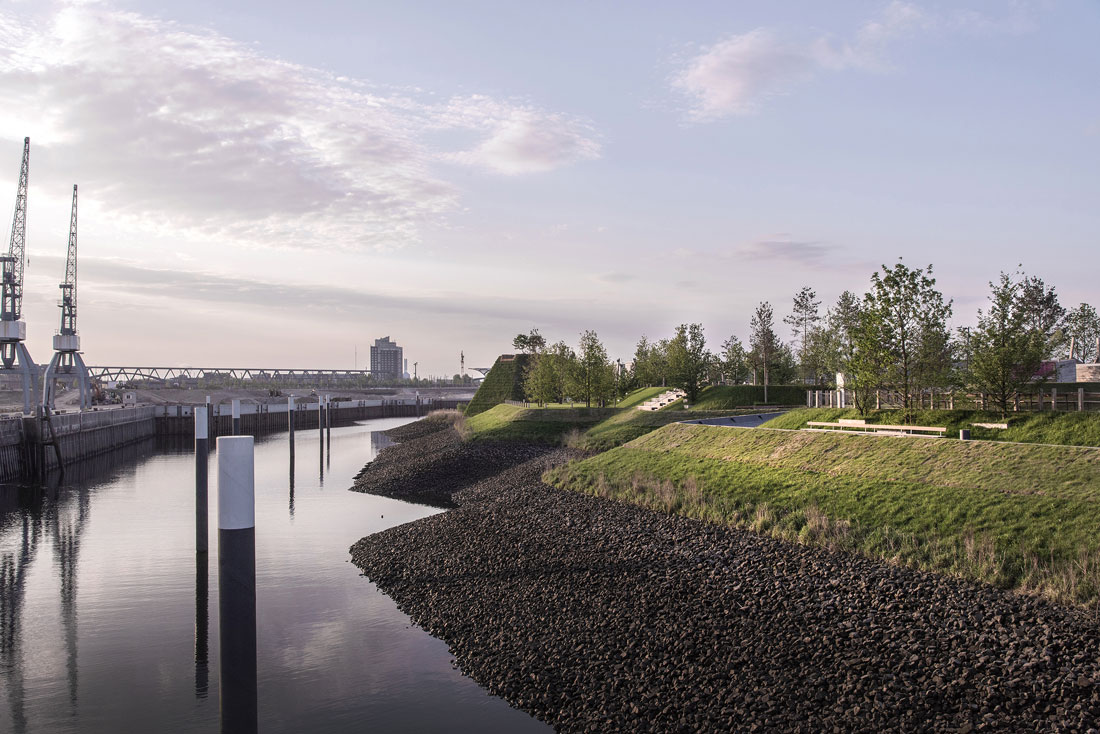 The bridge from Versmannkai to Baakenpark provides pedestrians and cyclists with a direct link between the northern and southern parts of the new city quarter. The peninsula itself is accessed by a circular path along the shoreline.

Due to the special flood protection requirements, the playgrounds and lawns of the park were laid out on three plateaus. The three plateaus are clearly different in their uses and atmospheres: in the western part a sport and play area dominates; the middle level offers a play and sunbathing area with the gallery of banks; in the east, the Himmelsberg rises away from the hustle and bustle as the highlight. 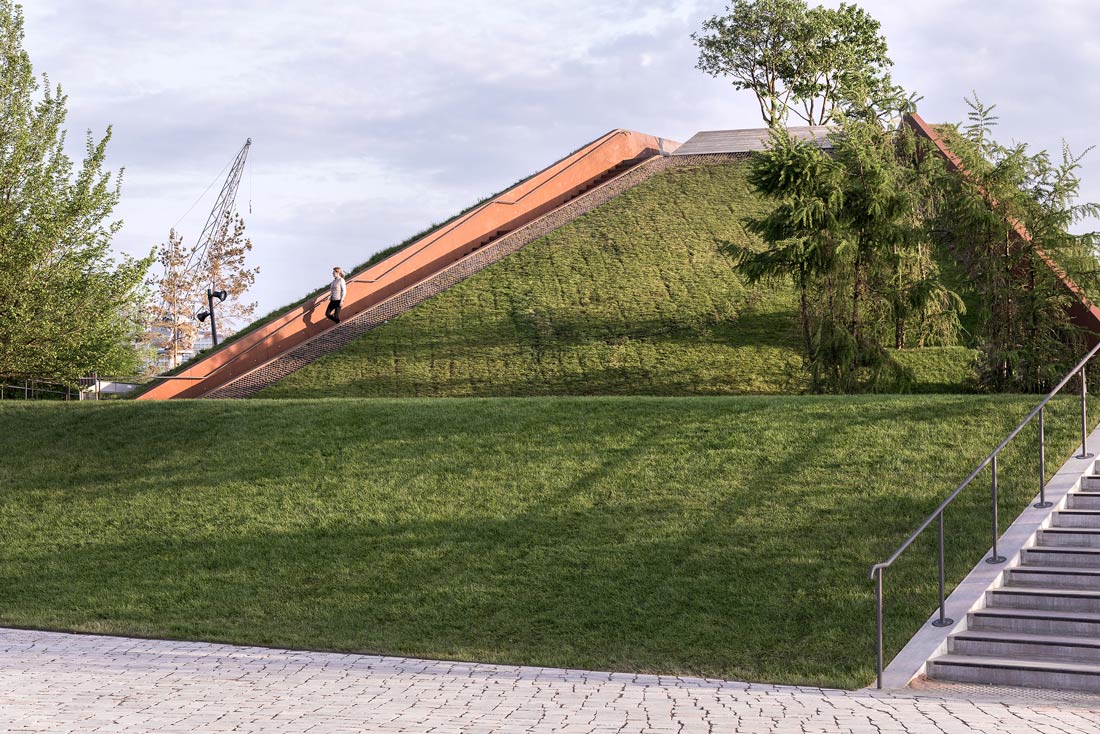 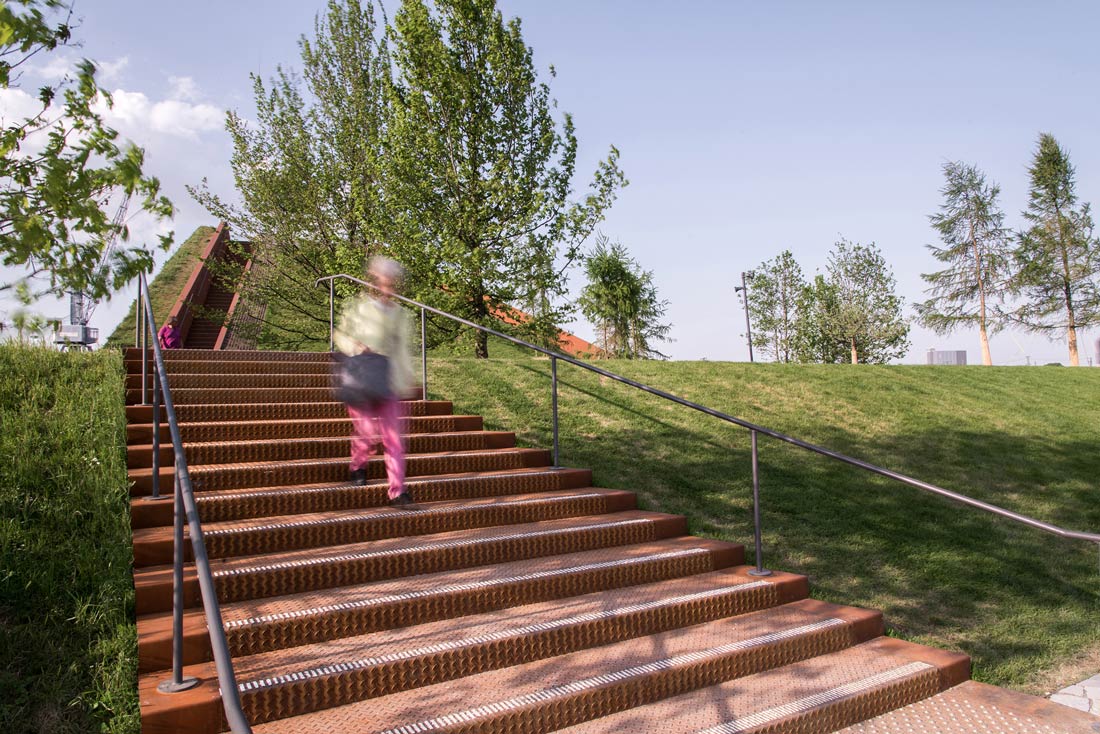 Right at the entrance to the park, the “island sofa” serves as a meeting point – an impressive, wooden seating area where sitting, but also lying, is possible. Above it, within easy reach, is the Treibgut playground. Seemingly indiscriminately, there are wooden boxes distributed on a playground, which are reminiscent of flotsam from old times. The “flotsam playground” offers different themed boxes, which can be discovered by children. A second important component of the plateau is a small artificial turf playing field for leisure and school sports. 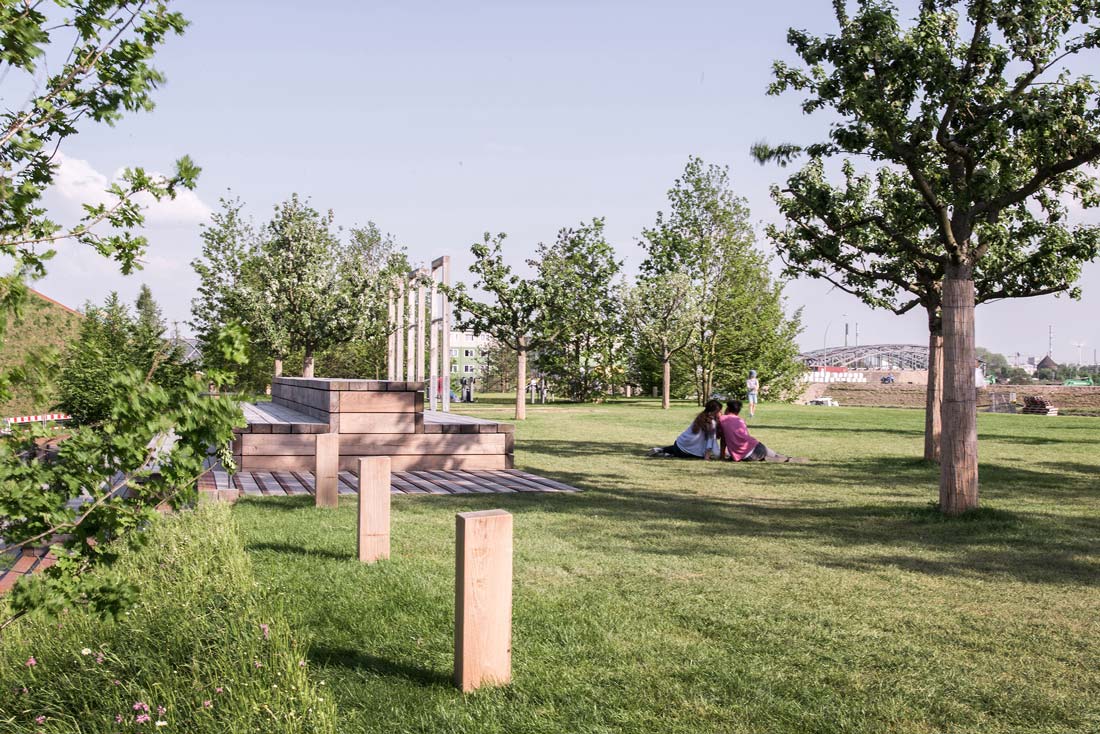 The northern embankment of the central plateau is equipped with a generous seating area. With panoramic views of the harbor basin and the Versmannkai on the other side of the plateau, this heightened area is an attractive place to sit, which can also be used as a platform for small events. With its extensive lawn under fruit trees, the central plateau also invites visitors to picnic.

In an exposed location there are three large “sky swings” as well as a slightly recessed area with cross-generational training equipment sheltered between trees. In the neighborhood of the newly planned primary school and kindergarten there is a 100-meter running track. 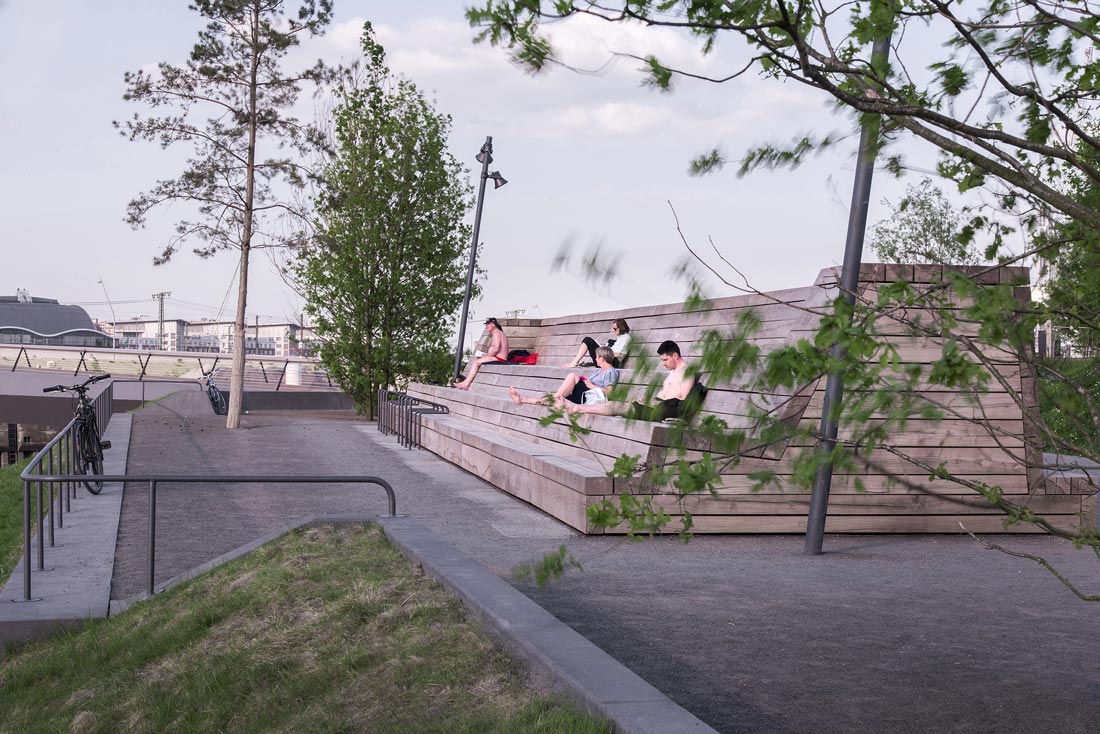 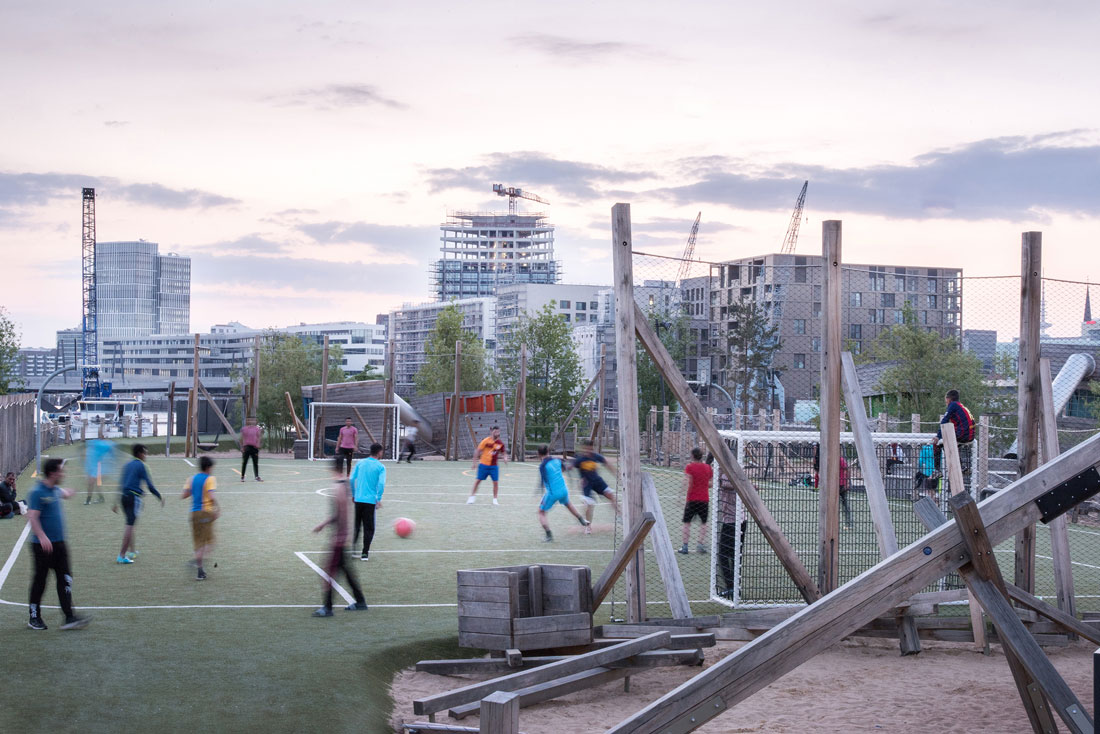 The Himmelsberg rises in the eastern part. It forms the striking end of the park and blends harmoniously into the picturesque landscape of the peninsulas. Like a pyramid, the 15-meter-high mountain drops sharply on three sides. A staircase cutting into the flat slope of the hill leads visitors to a viewing platform. It forms the highlight of the Himmelsberg and offers a panoramic view of Hamburg harbor. 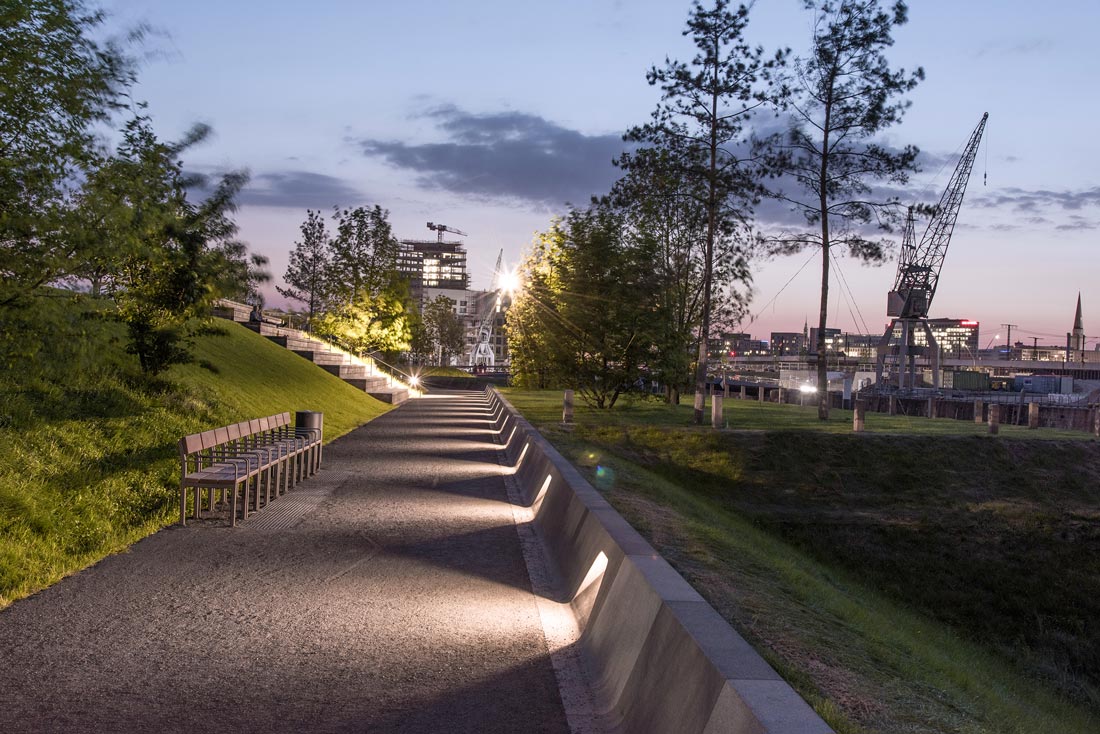