The station is the result of an ambitious 20-year project – masterplanned by UNStudio – to redevelop the wider station area, the largest post-war development in Arnhem. Backed by the Dutch government, this transfer hub rewrites the rulebook on train stations and is the most complex of its type in Europe. The station will become the new ‘front door’ of the city, embracing the spirit of travel, and is expected to establish Arnhem as an important node between Germany, the Netherlands and Belgium. The new terminal houses commercial areas, and a conference centre and provides links to the nearby office plaza, city centre, underground parking garage and the Park Sonsbeek. The area around the station will become a place in and of itself, with 160,000 m2 of offices, shops and a cinema complex. 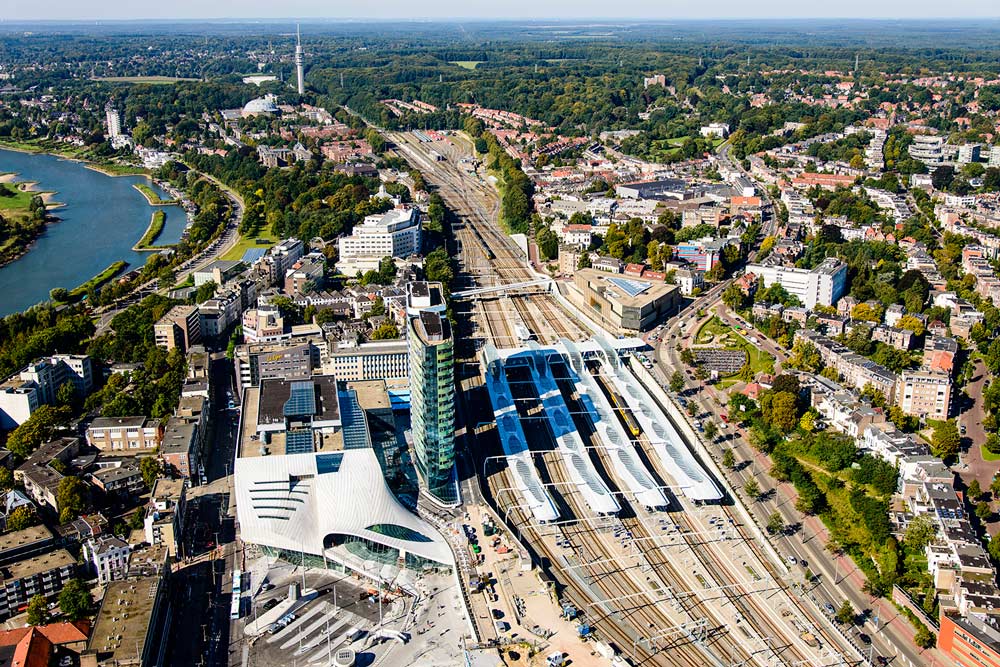 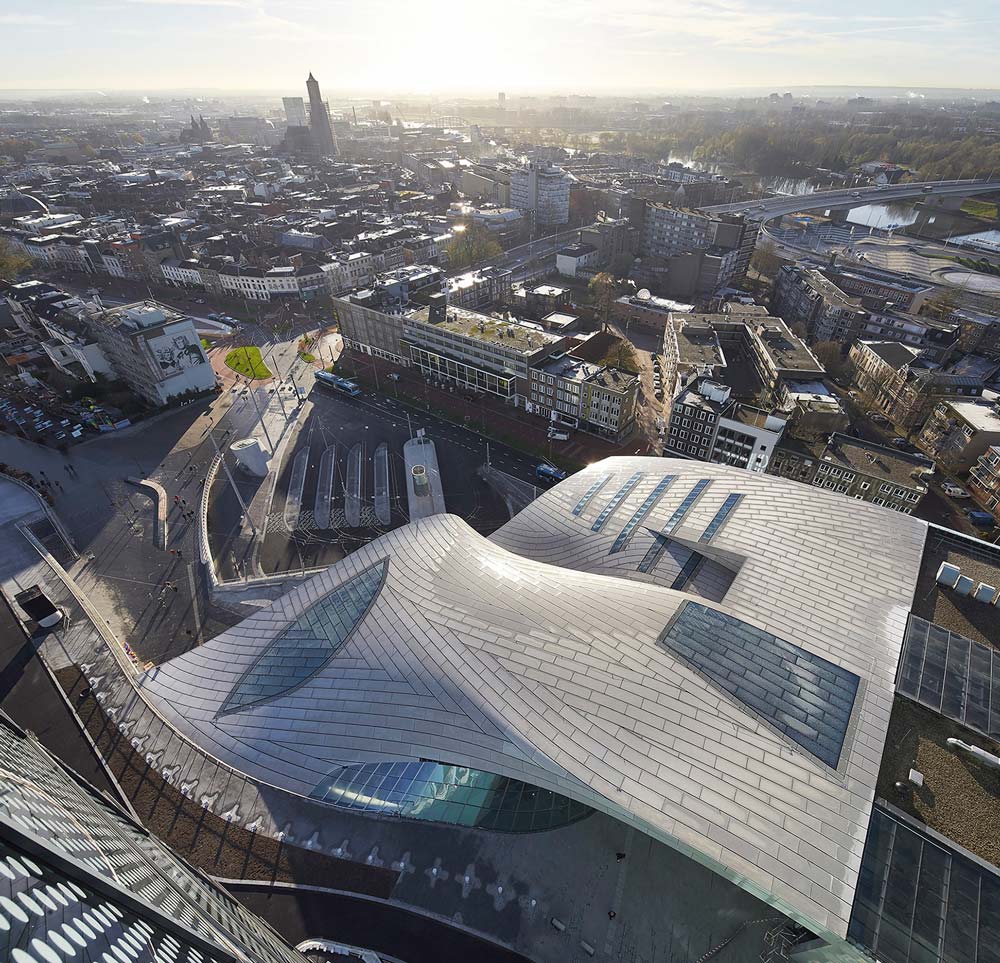 The 21,750 m2 transfer terminal features a dramatic twisting structural roof geometry, which enables column-free spans of up to 60 m in the transfer hall. Taking references from the continuous inside/outside surface of a Klein Bottle, UNStudio aimed to blur distinctions between the inside and outside of the terminal by continuing the urban landscape into the interior of the transfer hall, where ceilings, walls and floors all seamlessly transition into one another. The structure of the roof and twisting column was only made possible by abandoning traditional construction methods and materials; much lighter steel replaced concrete – originally intended for the station – and was constructed using boat building techniques on a scale never before attempted. 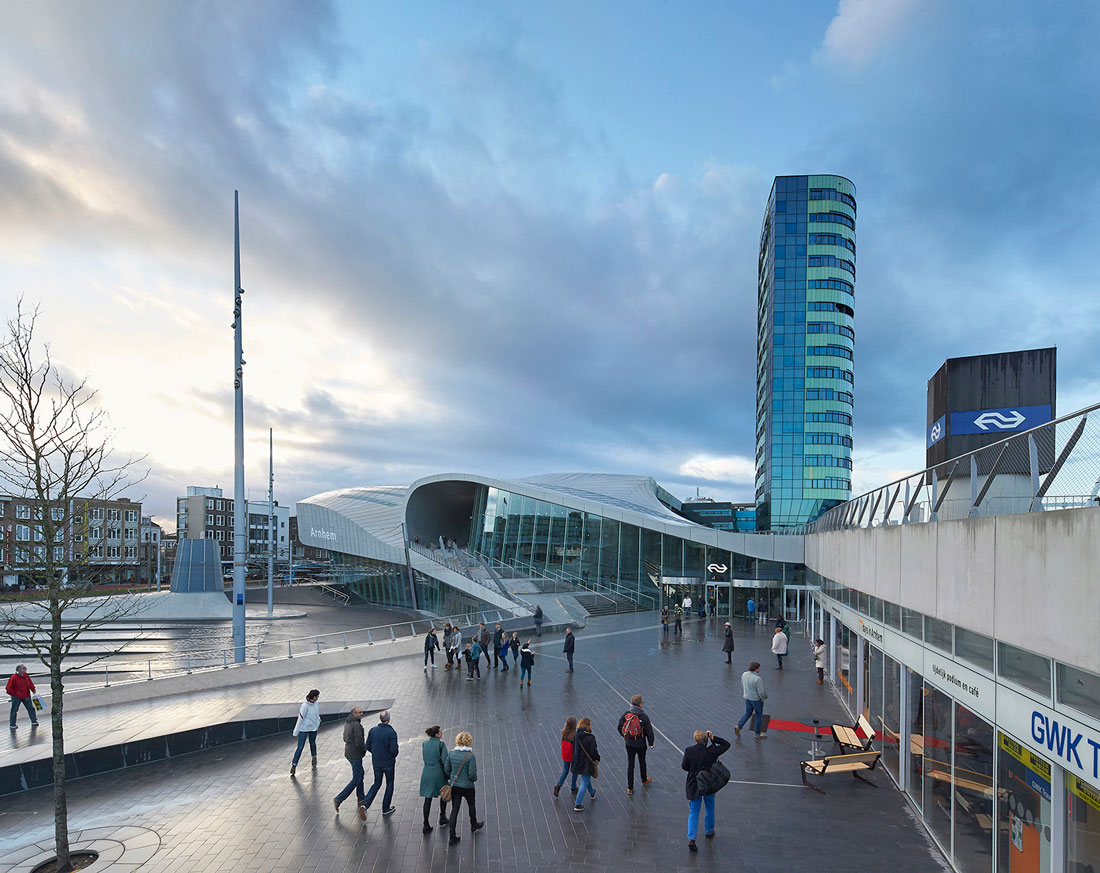 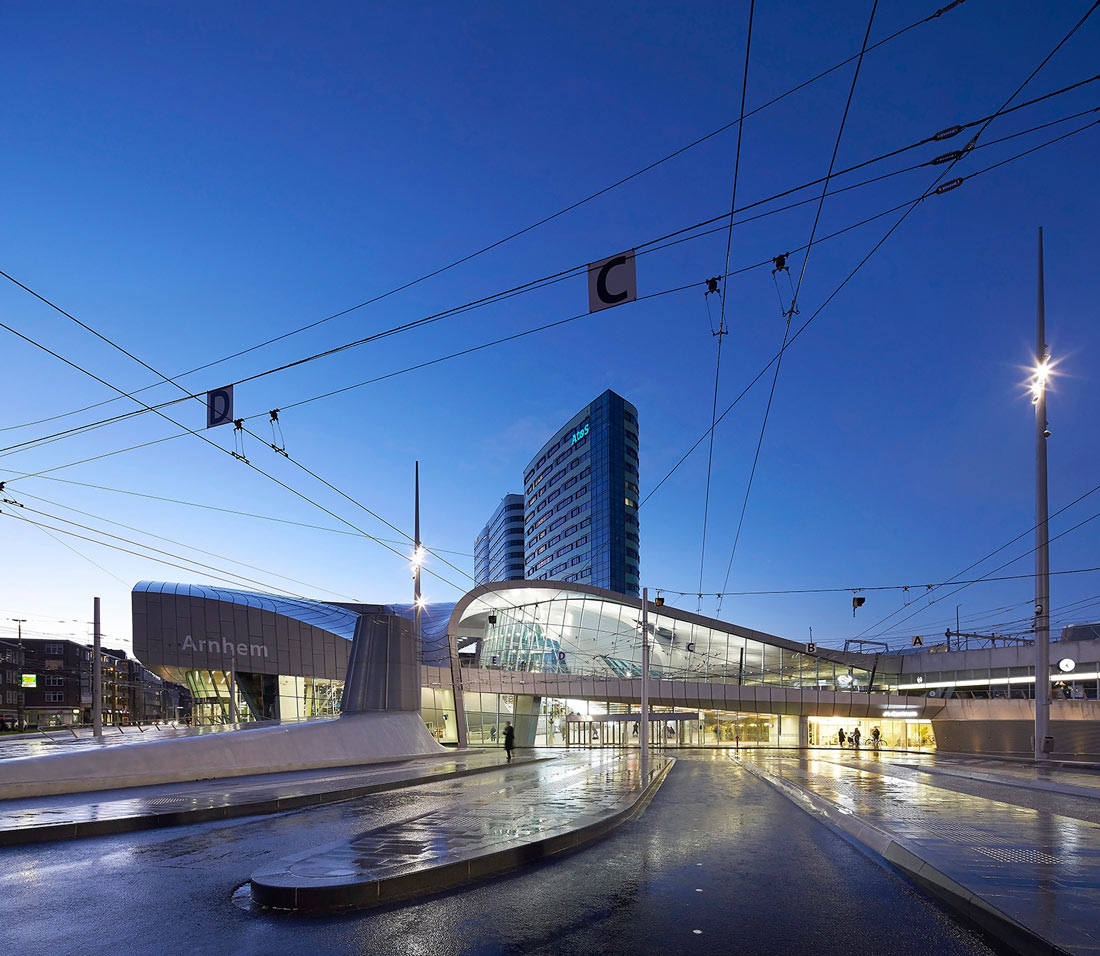 Delivery of such a complex and lengthy project on time, on budget and without design compromise required the courage and determination of both the client, ProRail B.V., and the architects. It is also the result of an exceptional collaborative endeavour by the key stakeholders, ProRail, the contractor combination Ballast Nedam + BAM, the Ministry of Infrastructure, and the Arnhem City Council. 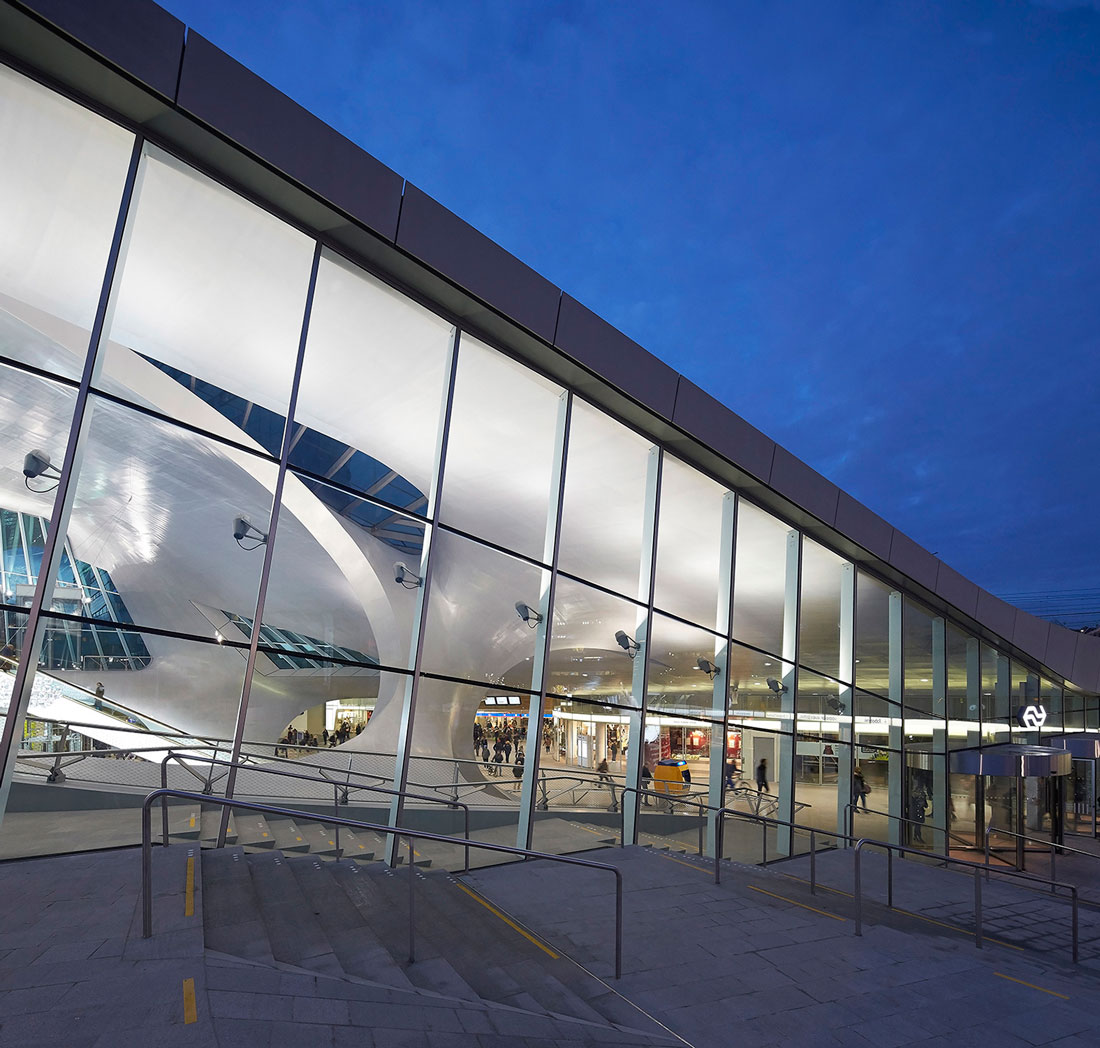 UNStudio began the masterplan in 1996 and completed its first sketch design for the transfer terminal back in 2000. After intensively researching passenger flows and transportation modes, UNStudio proposed that the new terminal should expand to become a ‘transfer machine’ that incorporates the whole spectrum of public transport, meeting the travel demands of the 21st century. Working with structural engineers Arup, a space without columns was produced, forming an architectural expression designed around the ways people will intuitively use the space. The station works on international, national and regional levels, allowing passengers to move between cities intuitively and with ease. This project is part of a countrywide railway upgrade that will see new stations in Rotterdam, Delft, The Hague, Breda and Utrecht. 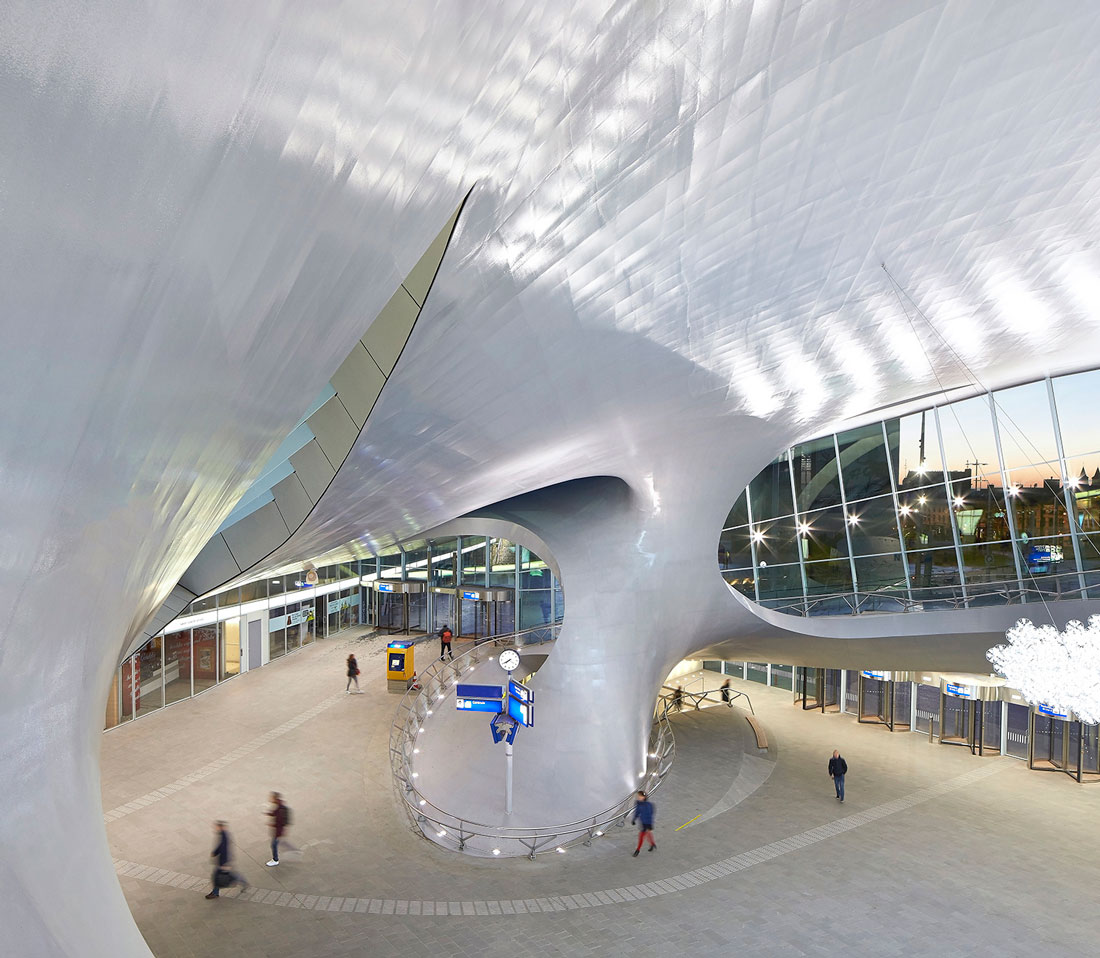 “Arnhem Central is no longer just a train station. It has become a transfer hub. We wanted to give a new and vital impetus to station design, so rather than merely designing the station around the activities and people flows that already took place there, the expanded architecture of the new transfer terminal directs and determines how people use and move around the building,” said Ben van Berkel, founder and principal architect of UNStudio. 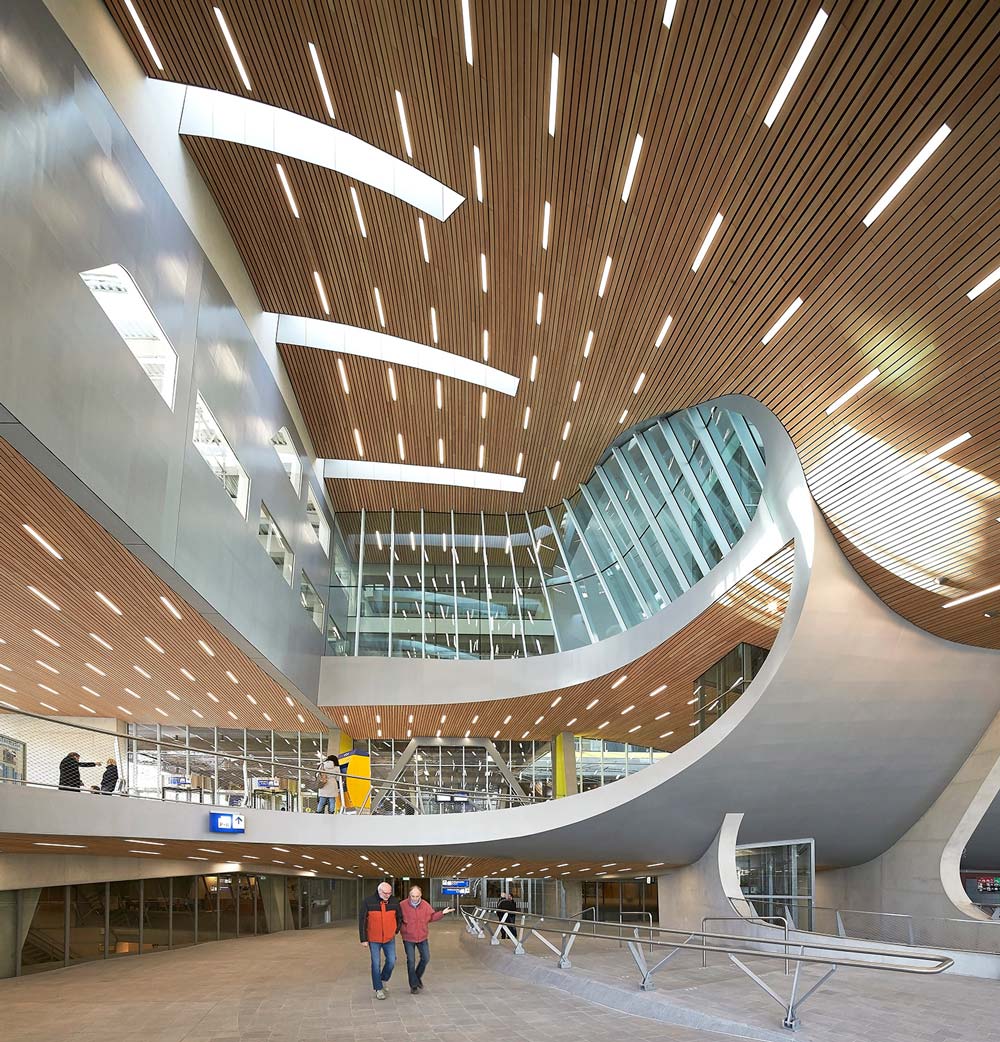 “To keep all stakeholders on board and on the right track during the long journey to completion was a real challenge,” said Karin van Helmond, project manager for station development at ProRail. “In the past 20 years, many things changed in the economy, technology, politics and the social environment. By focusing on our ultimate goal – the actual building of this magnificent station – we succeeded in overcoming all setbacks and risks and, by working closely together, we got this unprecedented job done.” 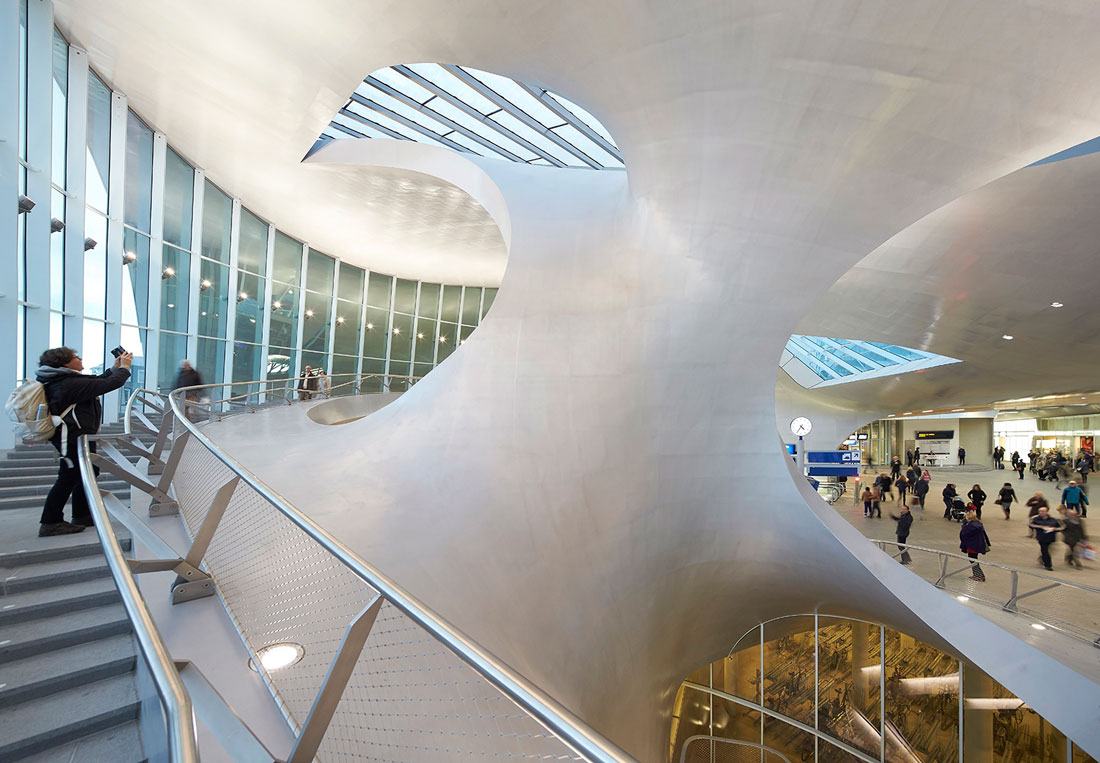 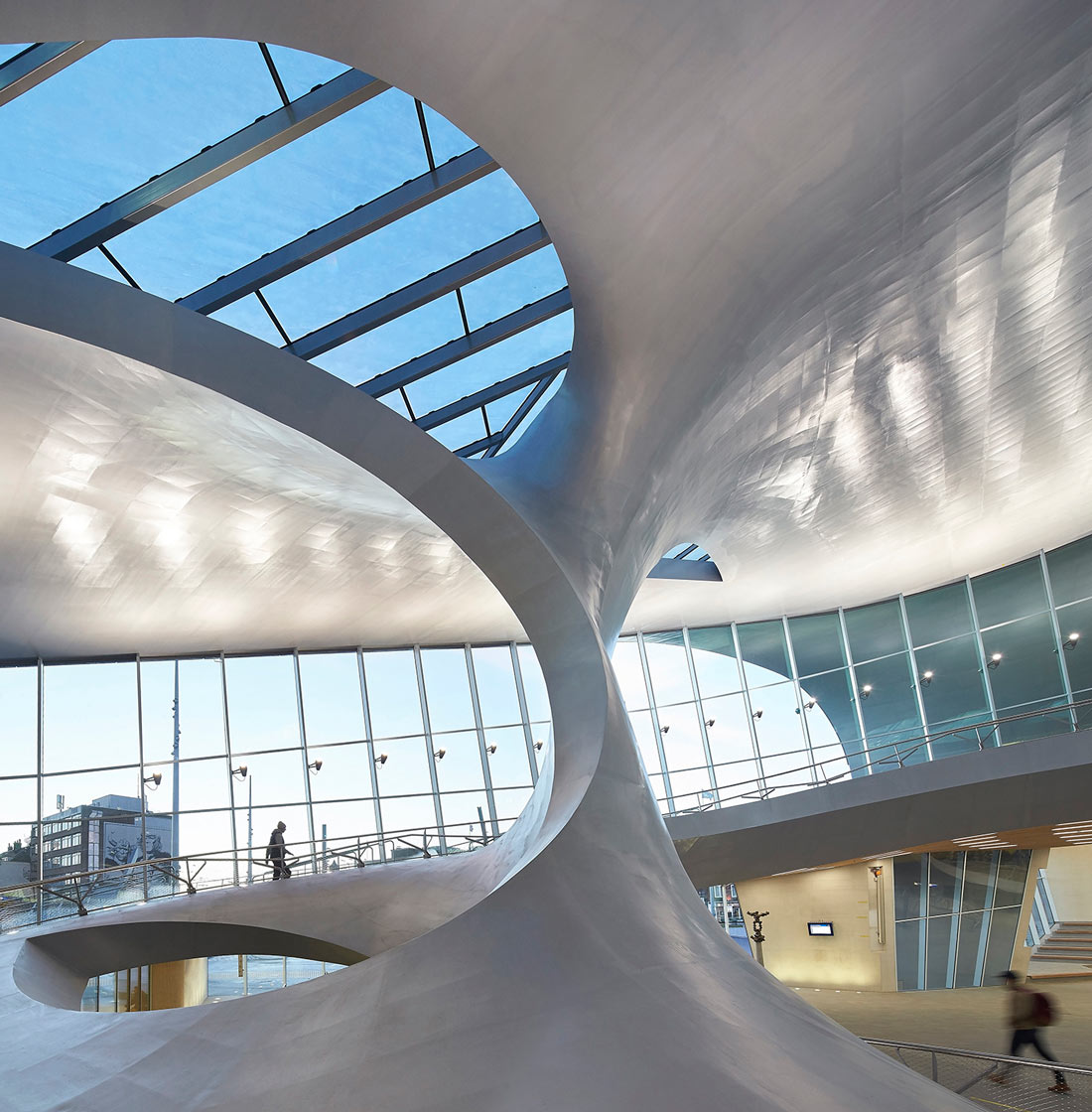 Integrating the naturally sloping landscape distinctive to Arnhem, UNStudio conceived the transfer terminal as a flowing, utilitarian landscape of different functions, stacked up to four storeys above ground and two below. The key space is the 5,355 m2 main transfer hall, topped with a dynamic, undulating roof form. 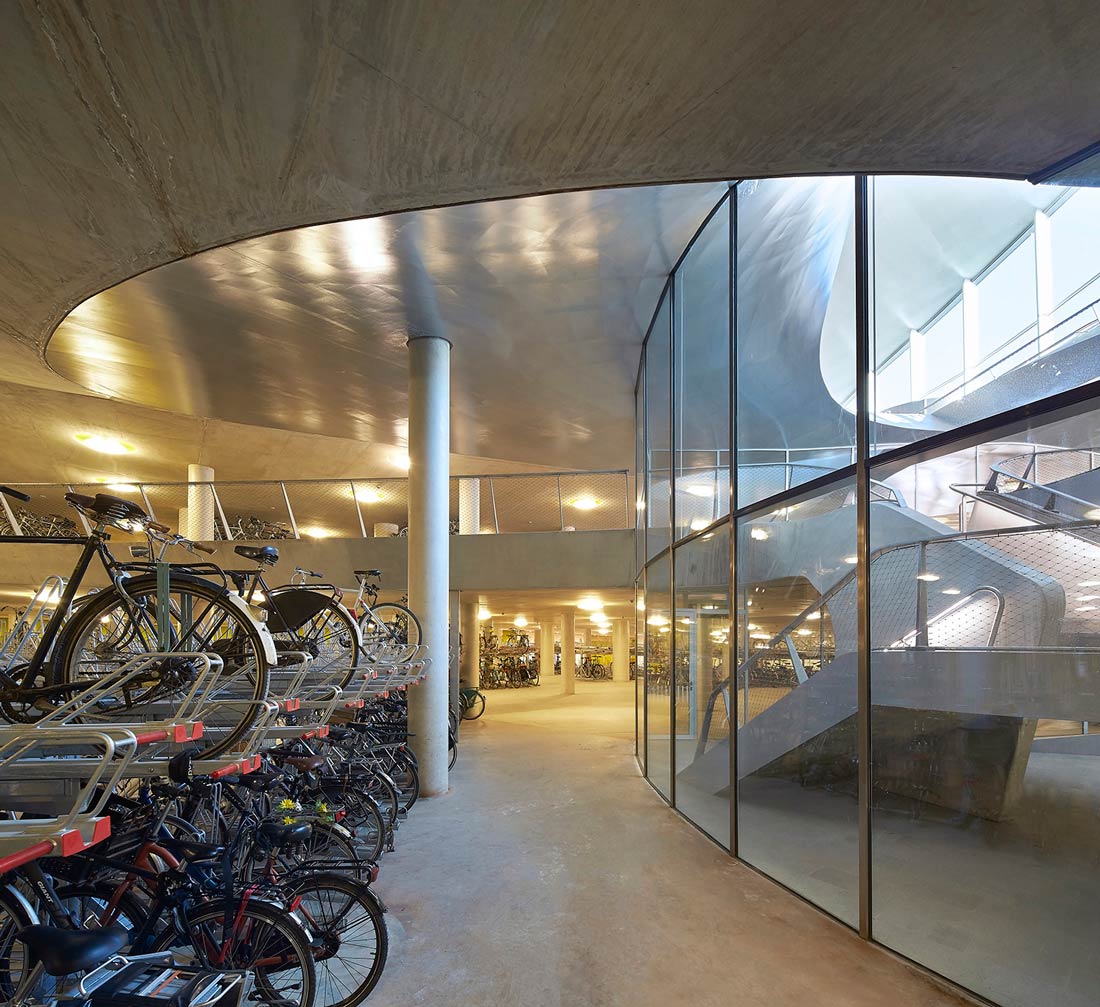 In the development of the design, the practice used a series of conceptual structural tools to mold the geometry of the terminal landscape to accommodate the different programme functions. These include the use of ‘V-walls’, a load-bearing concrete structure that absorbs the differences in the required grids and provides daylight to the below-ground levels. The spaces between these elements also form the public access from the underground car park to the other components. 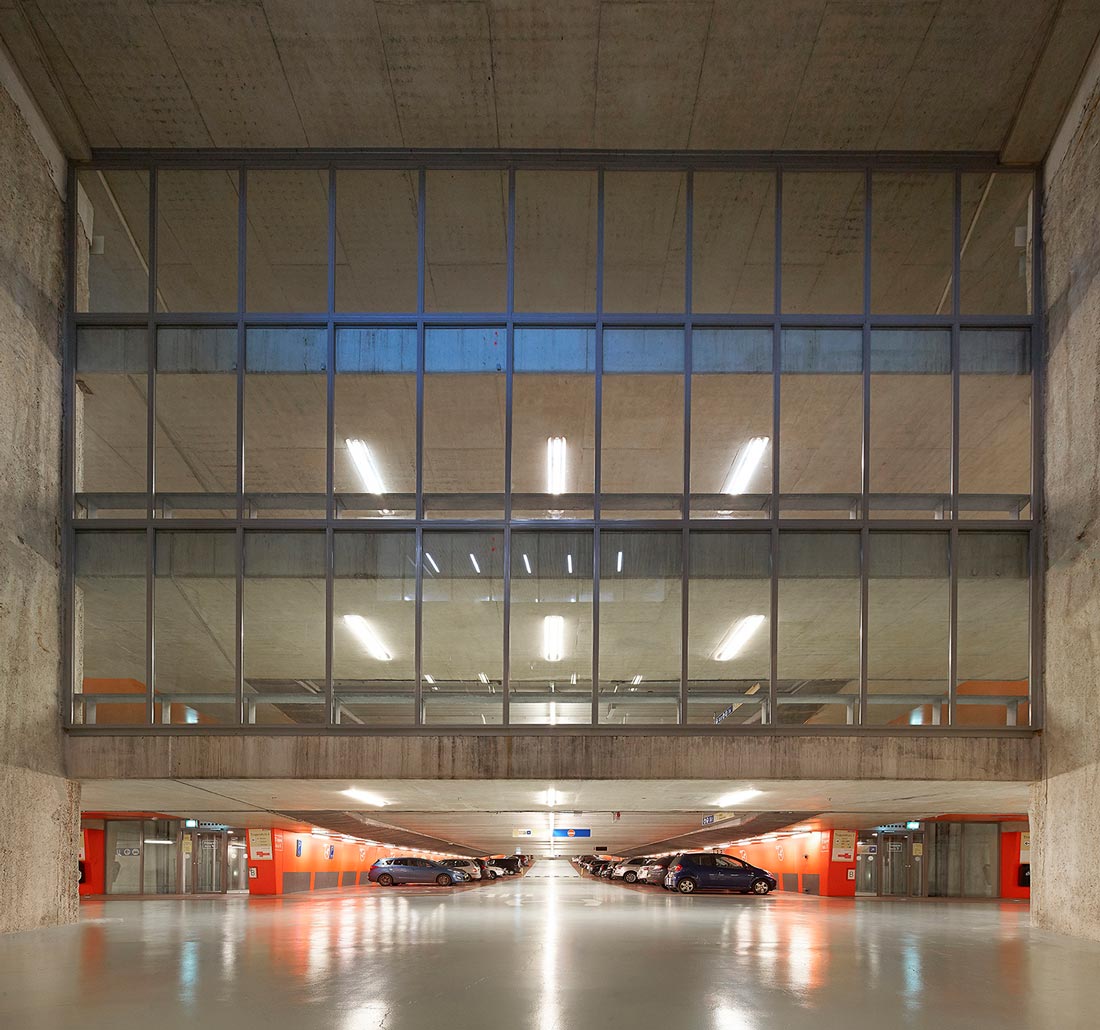 In 2001, Arnhem Central acquired the status from the Dutch government as of one of the ‘new key projects’ (station areas of national importance). These stations should function as catalysts for urban renewal and economic growth. It is anticipated that the new transfer terminal, which replaces a 1950s train station, will facilitate economic growth by enabling a vastly increased daily passenger flow to the city of 110,000 commuters per day in 2020. 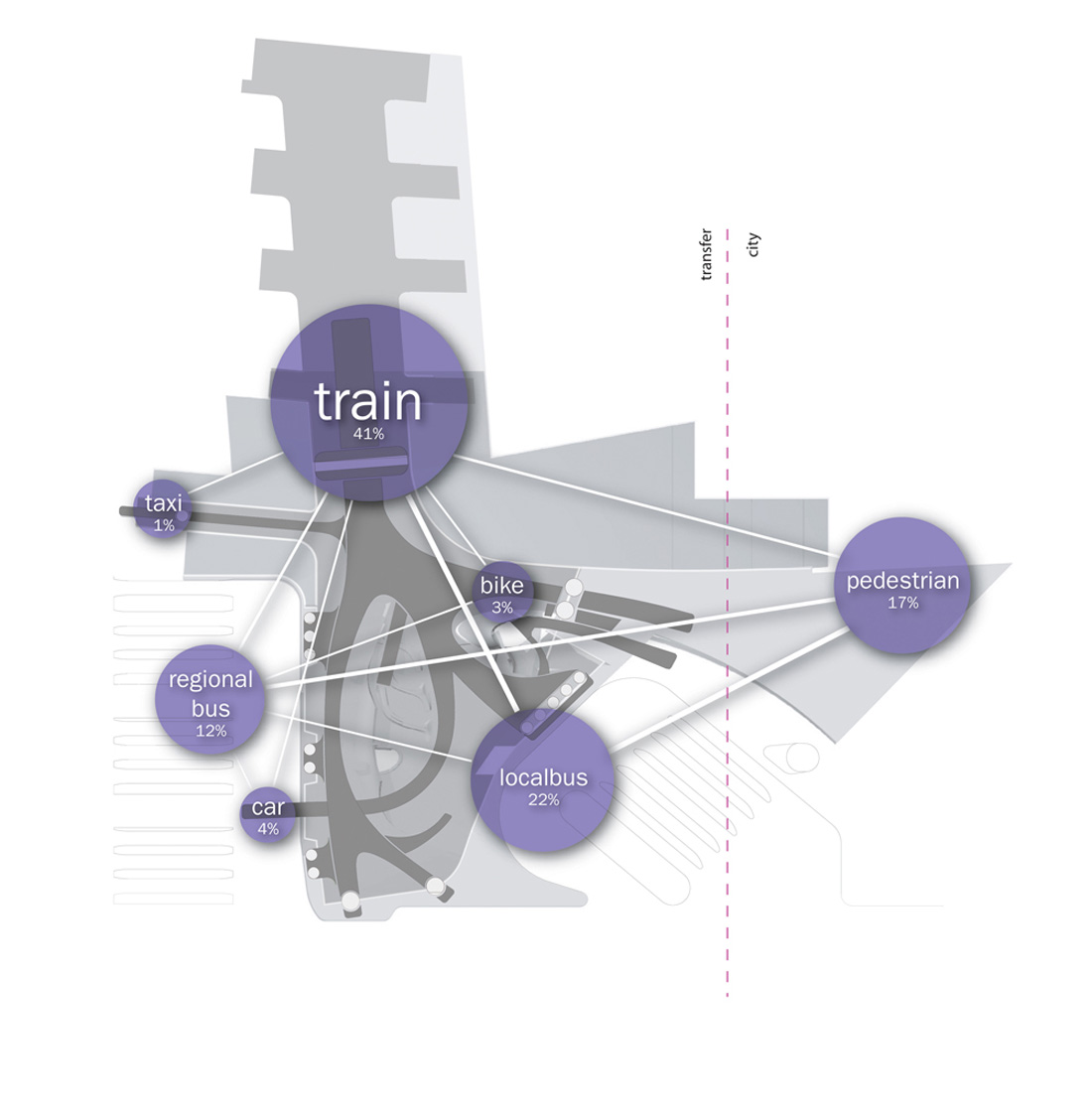