Casas Melhoradas is a collaboration between the Department of Human Settlements at the The Royal Danish Academy of Fine Arts Schools of Architecture, Design and Conservation, Faculdade de Arquitectura e Planeamento Físico at Universidade Eduardo Mondlane, The Mozambican NGO Estamos and the Danish branch of Architects without Borders.Architects: Johan Mottelson and Jørgen Eskemose.Photography: Johan Mottelson.

Mozambique is located in Southeast Africa and is one of the poorest countries in the world. The capital, Maputo, is characterized by urban development without effective planning, without enforcement of regulations, without appropriate infrastructure provisions and plagued by urban sprawl. All this causes increased infrastructure deficit, decreased mobility, loss of farmland and decreased access to employment, health and education systems. 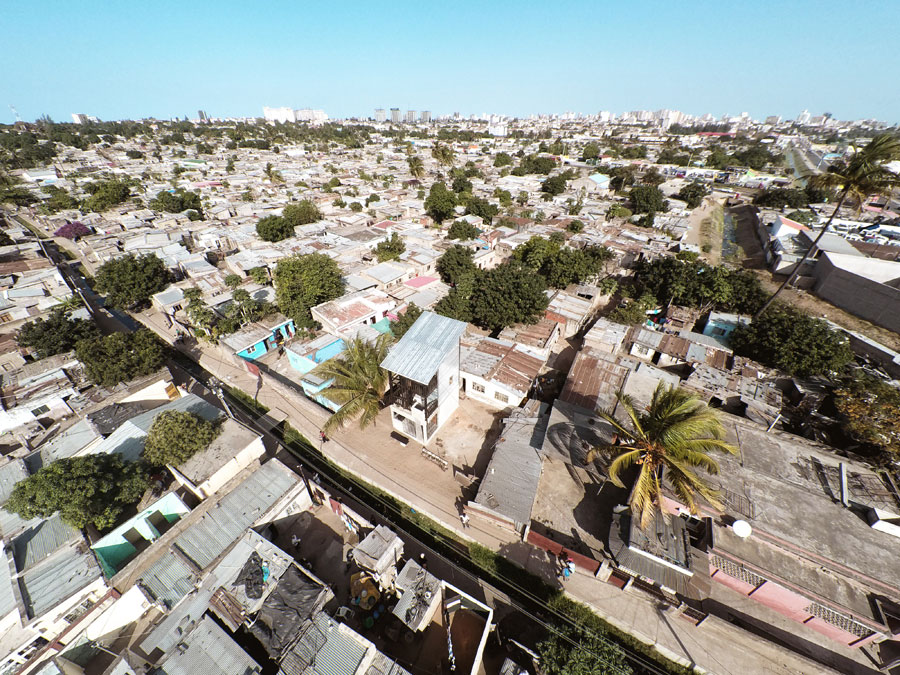 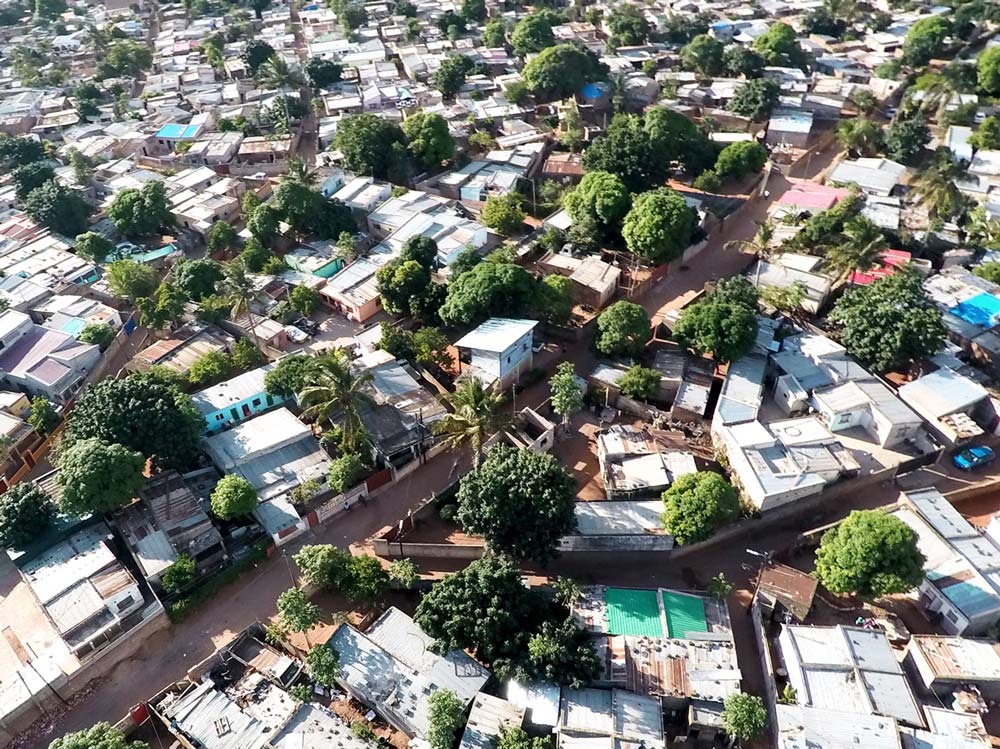 The city was developed by the Portuguese colonial rule until independence in 1975. Today, Maputo has a population of more than 2.5 million with approximately 80% of the population living in slums. The city has a high population growth rate (approximately 5% annually) and is expanding horizontally at high pace, covering vast areas with low-density urban developments with limited infrastructure provisions. The recently developed settlements are far from the center of the city where the jobs are, causing an increasing pressure to find housing near the center, which can only be achieved by increasing the urban density within the built-up urban fabric. There is limited experience with high densities in the slums, as multi-story construction is expensive. However, the demand for centrally located space has caused increasing land prices, providing the economic framework for urban densification through multi-story construction in the slums.

The cost of infrastructure is determined by each area and is lower per household in a dense city, since the distances between the buildings are shorter. Horizontal urban development thus requires more infrastructural investment to serve the population, while leading to decreased cost-effectiveness in the implemented infrastructural developments. Urban sprawl causes decreased urban mobility, as people need to spend more time on transport due to deconcentrating urban functions. These factors have wider negative implications in terms of access to jobs and services, and a negative impact on economic development.

Maputo – The informal city from Department of Human Settlements on Vimeo.

The houses in the slums of Maputo are almost exclusively single-story and the urban densities are relatively low; approximately 0.3-0.4 floor area ratio (FAR) in centrally located slums, generally decreasing with the distance to the center, and below 0.05 FAR 10 km from the center. The continuing urban sprawl with low urban densities on the periphery of the city decreases mobility and increases the need for investments in infrastructure, while public investments in infrastructure are limited. Strategies for countering the extensive urban sprawl by increasing the urban density are thus essential for initiating a more sustainable urban development. 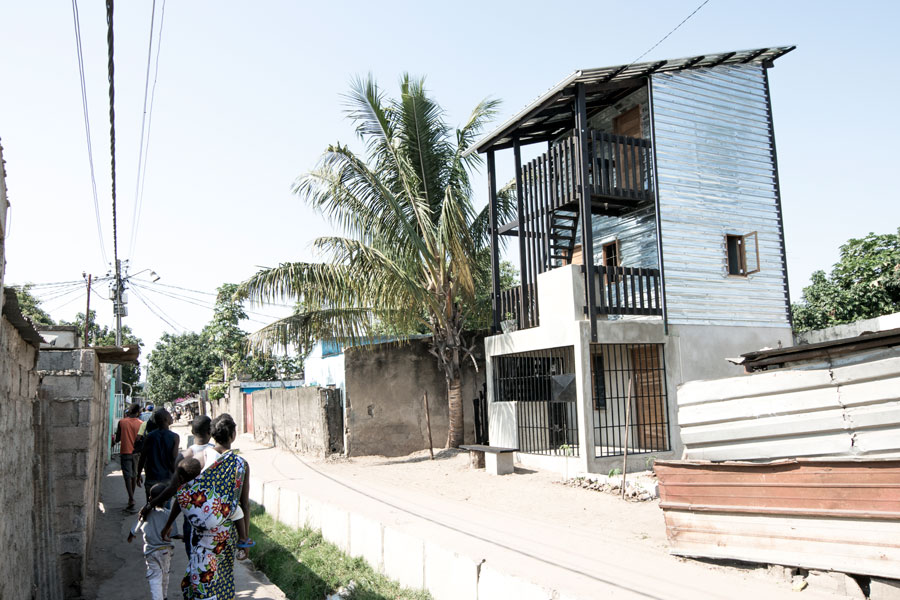 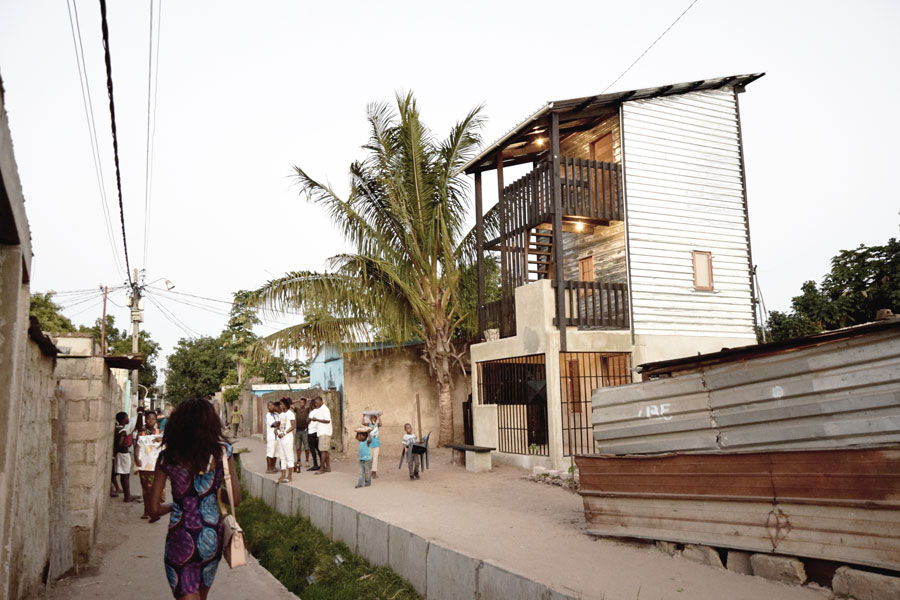 Casas Melhoradas seeks to improve the quality and decrease the cost of housing and develop housing typologies that utilize space and infrastructure more economically to initiate a more sustainable urban development in the slums of Maputo. 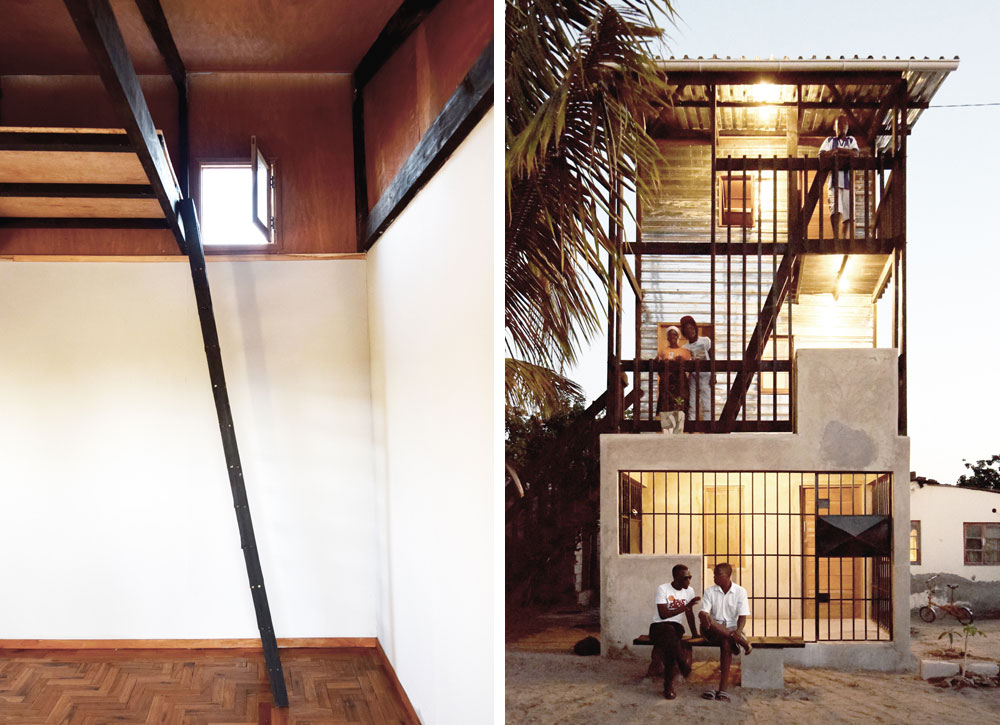 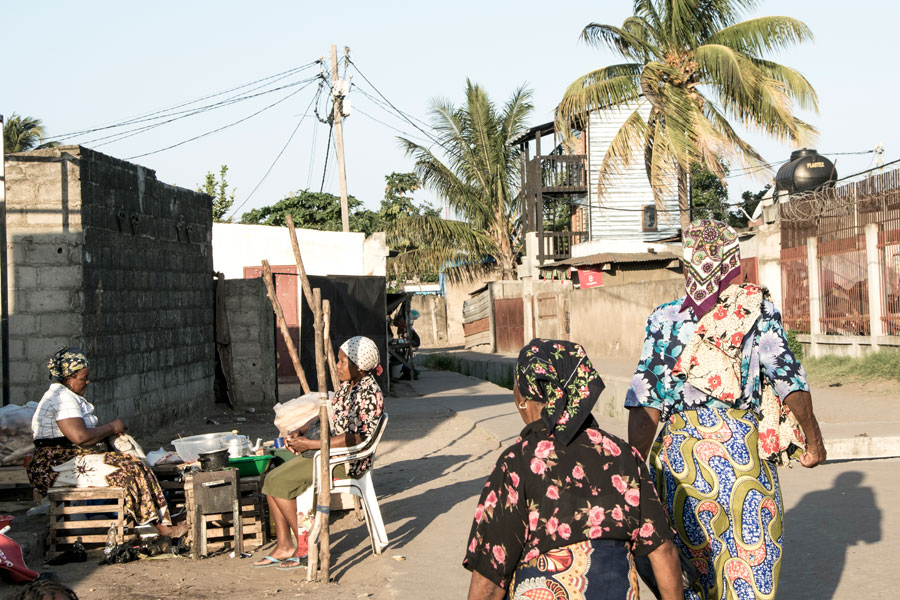 The project develops semi-industrial building component production and is experimenting with prefabricated element construction, produced locally in Maputo’s slums, based on the local capacities. Thereby, the project seeks to limit the waste of resources, reduce the price, reduce the time of construction and improve the quality of housing. 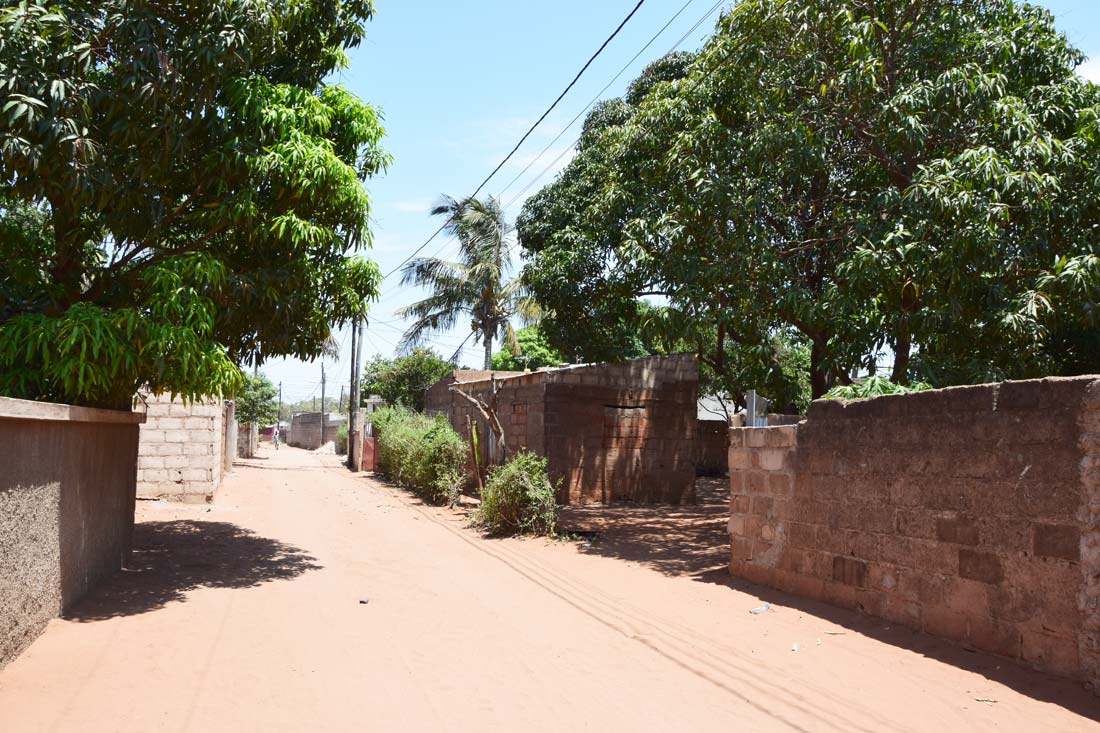 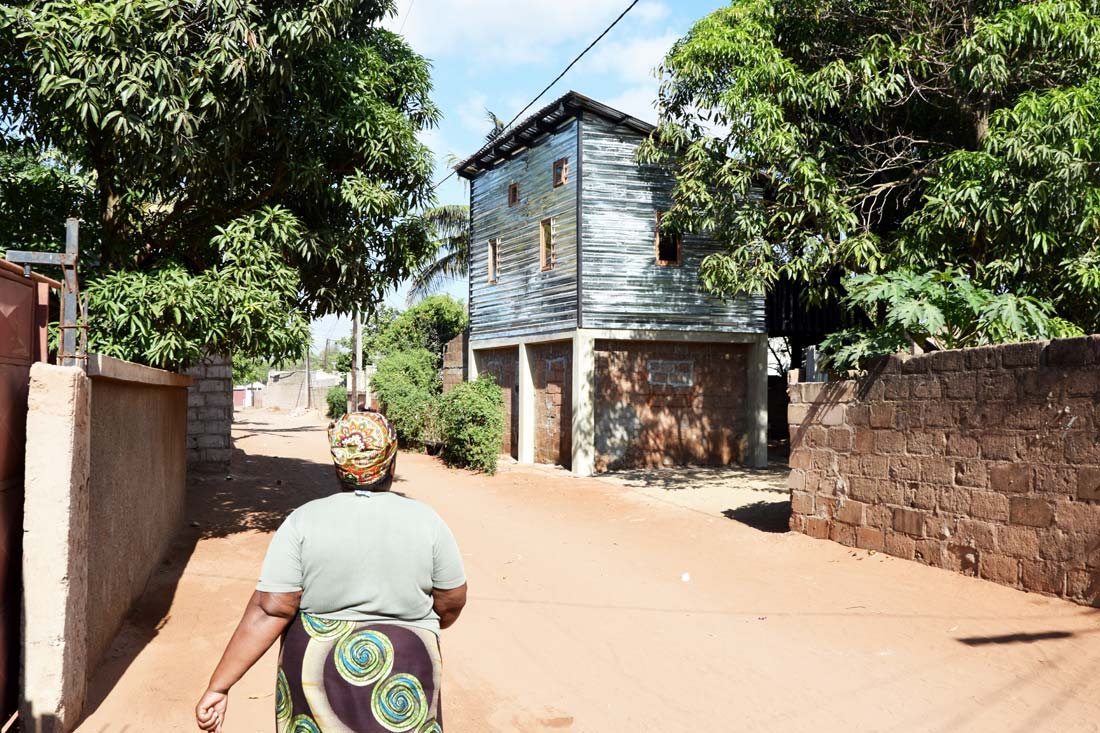 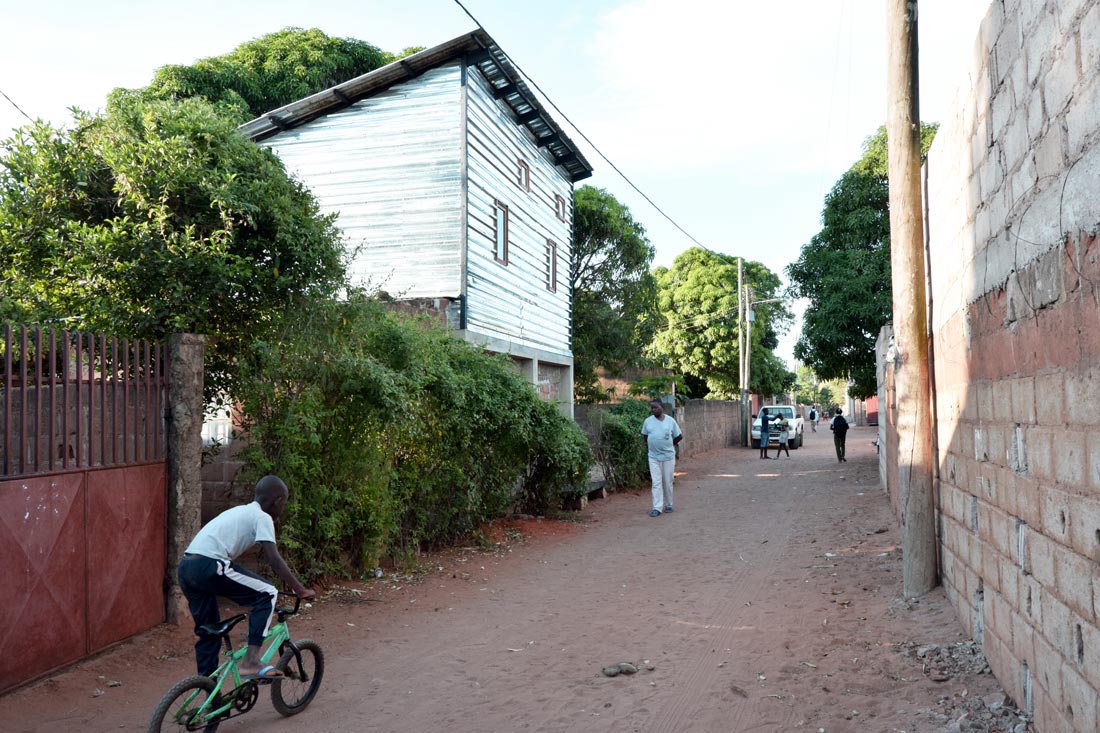 The project develops multi-story housing typologies, rooted in the local socio-economic and cultural conditions, seeking to utilize space more efficiently in order to contain the urban sprawl and use infrastructure more economically. Thereby, the project seeks to facilitate the development of more compact urban environments in the slums, making future infrastructure investments more cost-effective. Given this background, the project seeks to improve mobility, improve the access to infrastructure and economize space. 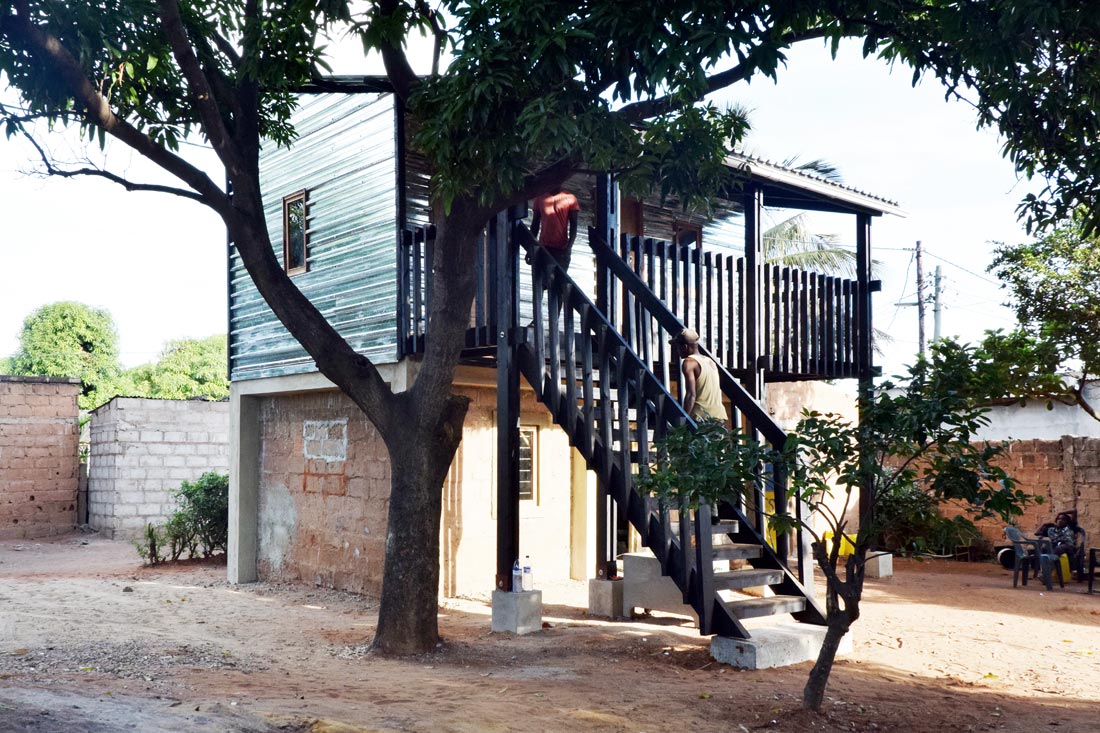 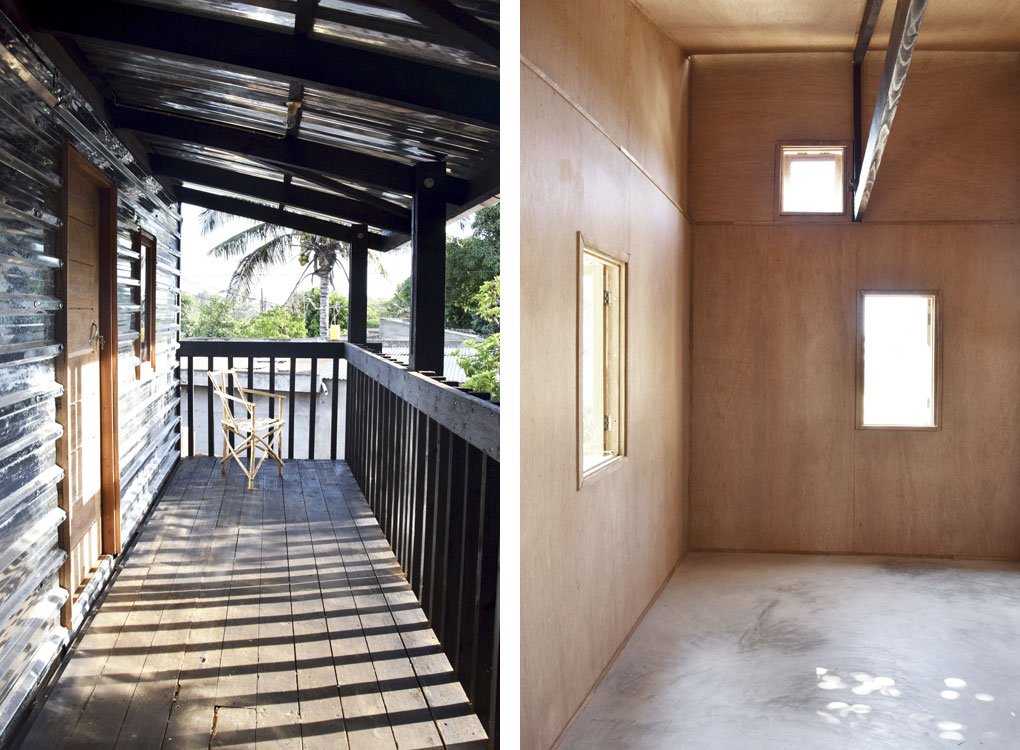 The developed housing models, building techniques and production methods are tested in full scale in collaboration with local builders, through the construction of test houses. They are subsequently evaluated to identify the most appropriate solutions for low-income groups in Maputo.

Relationship between urban density and mobility.

The built housing units are rented out and fully financed over 10-15 years. The project seeks to engage in public and private partnerships for the construction of affordable rental housing in order to scale the impact of the project. The project is currently seeking donors and investors for future collaboration.

The prototype is a modern interpretation of the traditional “Casa de Madeira e Zinco” (typical housing type of wood and corrugated iron sheets) and “Casa de Blocos” (typical housing type of concrete blocks) with improved indoor climate. Light weight prefabricated wooden elements were produced in a local carpentry workshop and transported by hand to the construction site where they were assembled by local craftsmen. Local sustainable wood was used. A building system developed in Brazil’s favelas (vigotas e abobadilhas) was used for the concrete floor separating the first and second floor. The vertical outdoor areas between the road and the house forms a social transition zone between inside and outside, where there is room for cooking and interacting with passersby. The three-story prototype is located in an informal settlement in proximity to the city center, consisting of one-story homes, and thus appears as a radical statement about how space and infrastructure can be used more efficiently. The housing units are rented out and expected to be financed over a seven year period.

« Shelter for Homeless: A Modular Concept
Technology, Architecture and Society »