70% Water is a project of IAAC (Institute for Advanced Architecture of Catalonia) developed for the Master in Advanced Architecture MAA01 in 2020 by Tomás García de la Huerta Eluchans, Vatsal Kapadia, Ka Man Lee and Nihar Mehta and by the Self-Sufficient Studio faculty Edouard Cabay, Peter Geelmuyden Magnus and Oana Taut.

The importance of the accessibility and availability of water has become more evident than ever with climate change and population growth. This is a crisis, not of scarcity but of management. Can the management of building resources help us live and interact with our surroundings in a more efficient way? To address this question, we developed a metabolic machine that conditions microclimates with water. The states of ice, liquid, steam, and mist circulate cyclically, creating controlled systems, both open and closed. 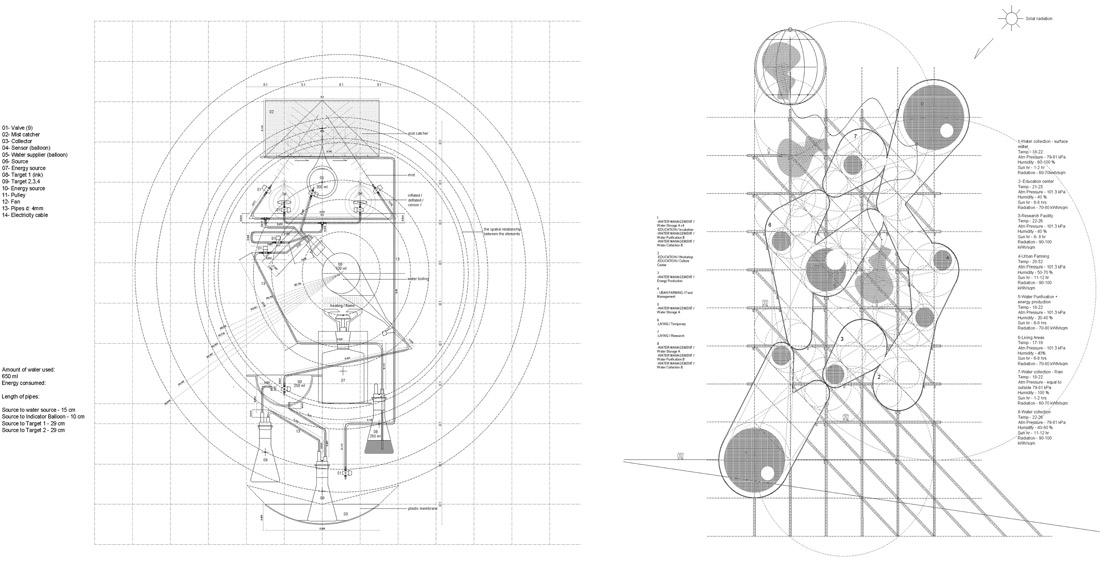 At an architectural scale, the elements and energies of the machine are adapted to interact with those of nature. The movement of water is activated by the negative pressure produced using solar energy. Water circulates through black helical tubes, and a parabolic reflector amplifies the sun’s heat to boil the water and start the system. The result is negative pressure, generated in the balloon, which is used to draw relatively colder water into the system. Thus, a cyclic system is created where hot and cold water circulate across the structure through a pipe system, conditioning different microclimates.

By exploiting the behaviors of water to alter how we inhabit spaces, our goal is to create self-sufficient architecture as the new normal for living. In a cold climate, with low atmospheric pressure and high solar radiation, the structure houses living spaces, along with areas for research and education programs that promote self-sufficiency.

The organization of these different programs is based on their interaction with water and its behavior. It also accounts for the performance of the programs based on contextual energies, such as solar radiation, wind direction, and the potential energy of water. Finally, the hierarchical relationship and proximity of the programs to one another determines the water pressure at different heights.

The distribution of the water systems in relation to the living spaces is not horizontal but inclined, expressing their relationship with gravity. The wooden structure is thus designed with its components aligned at an inclination, manifesting as the inclination of the stair in the design of the structure. A single module, with diagonal elements, is used at three different scales to populate the structure. This flexible property allows for the ability to control the density of the structure according to the program, circulation patterns, and water weight.

The programs are contained in inflatable bubbles. Cold and hot water pipes circulate through cushions with double-layered skins. These cushions are inflated with hot or cold steam, according to internal requirements. Solar radiation triggers the start of the cycle. In cold conditions, water stored from the bottom of the program spheres is siphoned along the pipes, distributing hot water which increases heat in the system. This conditions the internal spaces of the structure, creating a temperature difference between inside and outside. In contrast, during warm weather, the cold water circulating along the membrane helps alter the ambient atmosphere inside. The air both inside the skin and within the spaces forms an architecture that breathes and transforms.

As a living system, all the elements respond to one another, acting as a single body. Without the presence of water, the physical architecture is neutralized and cannot exist. The self-sufficiency of this project lies in the metabolic balance achieved through the decisive management of contextual, energy, structural, spatial, and material resources in relation to water, which plays the fundamental role.