3×1 is a trilogy of healthcare clinics that estudio.entresitio built in Madrid, Spain.

Why there were three may not be relevant anymore. It all started with an unusual competition to build two clinics for the same client (Madrid’s city council) with the same budget, the same functional program, and on two different sites.

Our answer to those initial conditions was to work with the idea of a “placeless building” as a strategy to insert a cohesive whole into irrelevant environments. A great sense of autonomy was required in formal, functional and even conceptual terms to allow the building to exist no matter where. This so-called placeless building takes on the opposition between hermetic and open as a conceptual framework and initiator for the project.

The third clinic came along later in the game as an expanded possibility for variation on the initial scheme. 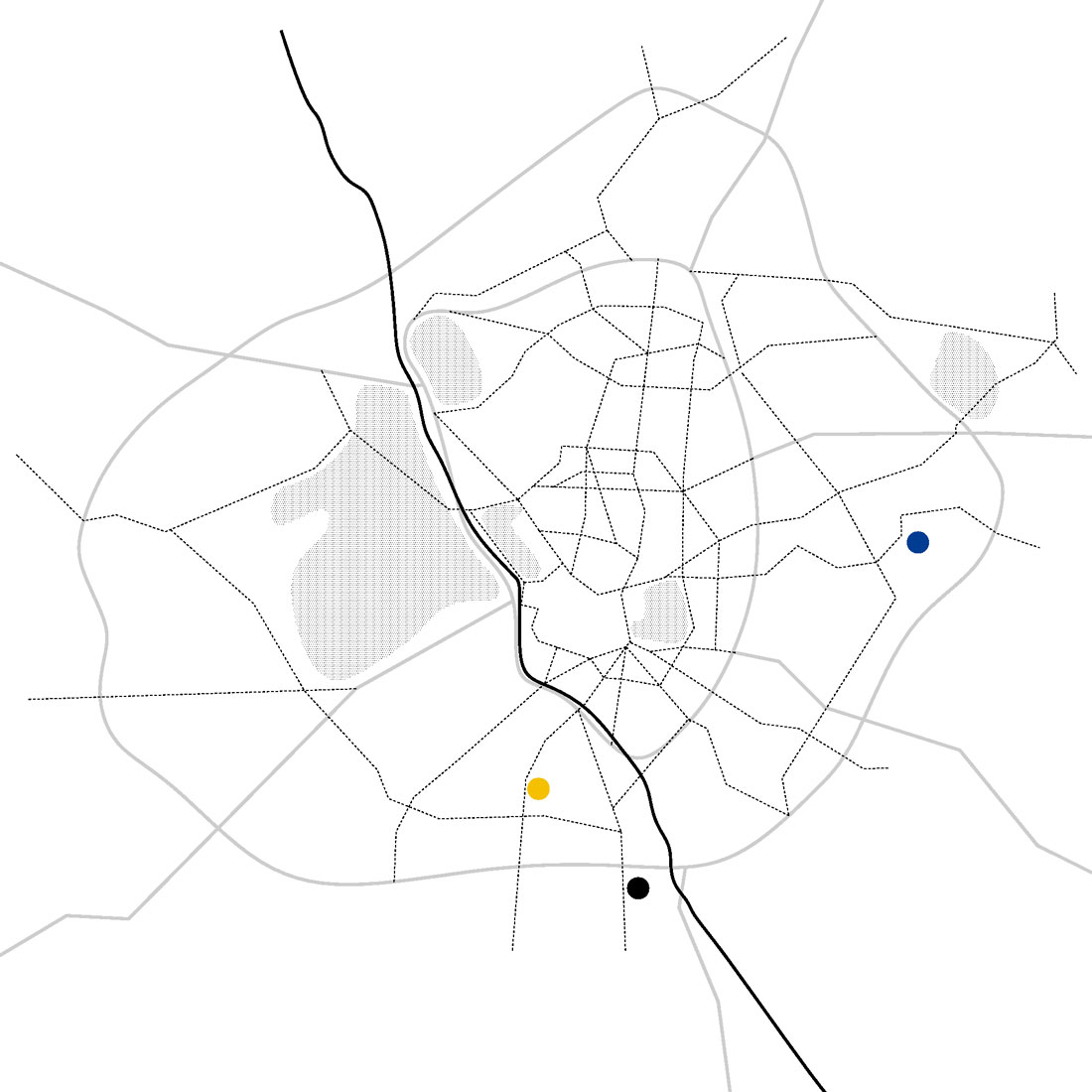 Placeless becomes different than siteless; “the site is not the place” is something Enric Miralles used to say when talking about the work of the exact disposition of a building on a site.

Although we are used to saying “this building is placed on this site”, potentially 3×1 can be sited on any/every place. As a placeless building, 3×1 is, thus, interiority; it is not oriented (the light comes from above). The fact that it gets light from above as the only requirement and main reason for its autonomy, and the lack of almost any other kind of relationship with the context, allows this ”box” to suit all possible urban conditions.

However, in the work of its exact disposition on each site, it addresses the urban context with a desire for frontality. No matter how large the site is, the building is related to the street in a direct and frontal way, as if the rest didn’t matter.

The three clinics have the exact same configuration; the program is disposed extensively on a single ground floor in an isotropic disposition that takes the light from above through fourteen patios.
Three main conditions arise from that disposition (from top to bottom)

– Voids and volumes in the shell.
– The “interior” public space.
– Perimeter of the outer shell.

In the archetypical condition of 3×1 we can think of those characteristics as the underlying structure of three different individuals to come. The shell is a hermetic image to the exterior, which encloses the open and bright space of the interior, to emphasize its value. 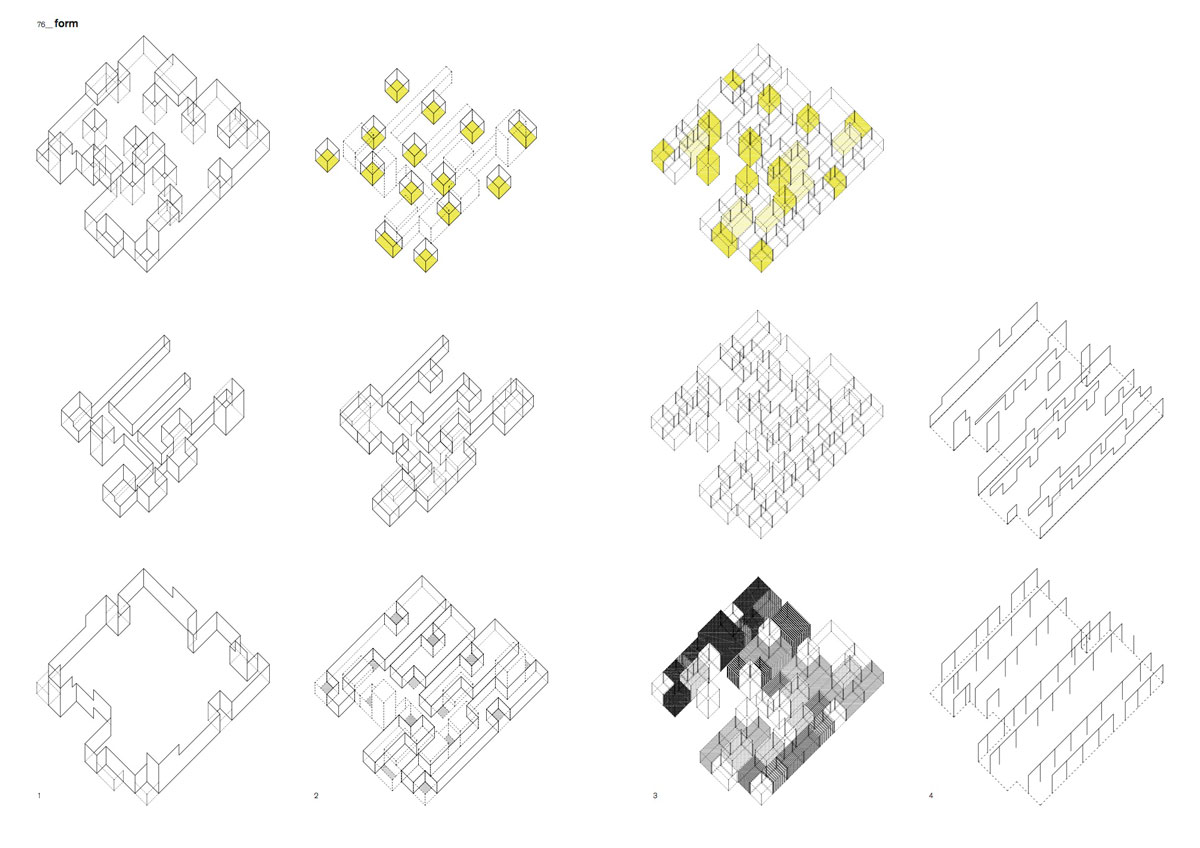 There is a non-stop visual continuity across interiors and patios that provides space enlargement; what you see inside is larger than what you can actually walk through.

The public space is extensive and non-hierarchical. The different rooms of the program are organized on a loose irregular orthogonal grid, where the patios are arranged in a zigzag pattern between the public and private rooms along three parallel (non)-corridors. The corridor vanishes to an extent; it is no longer the traditional tensed linear connecting structure, because the alternating arrangement of the empty spaces of patios and public waiting areas has a counterbalance effect between front and side. 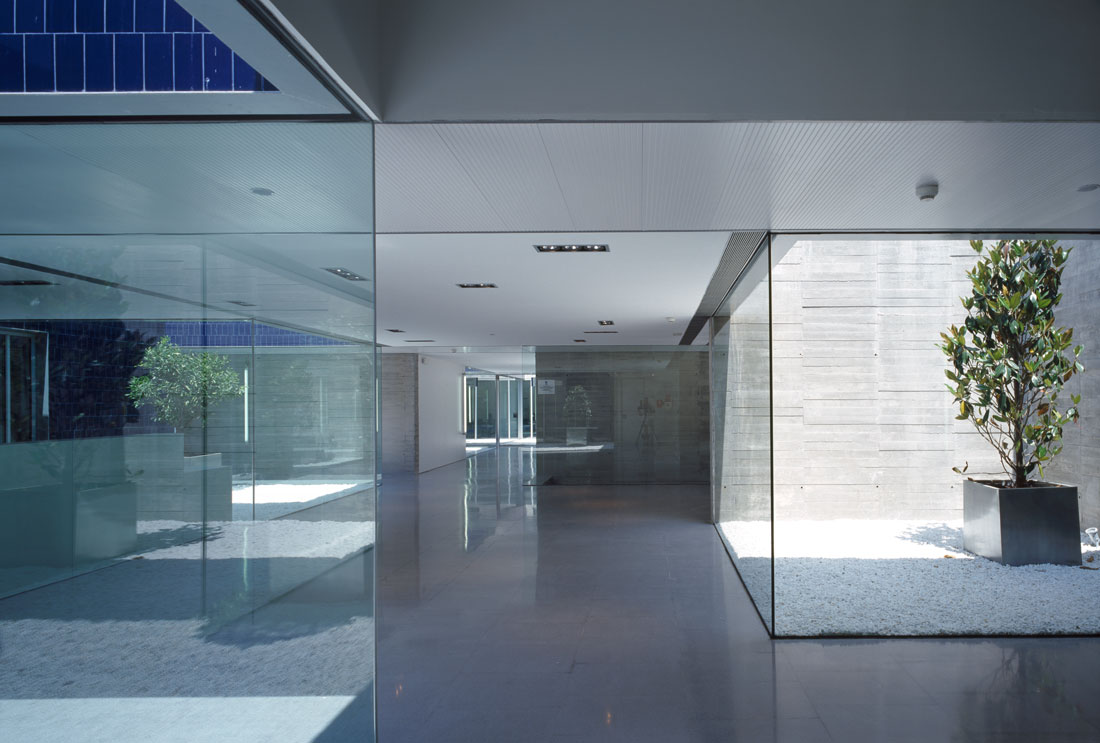 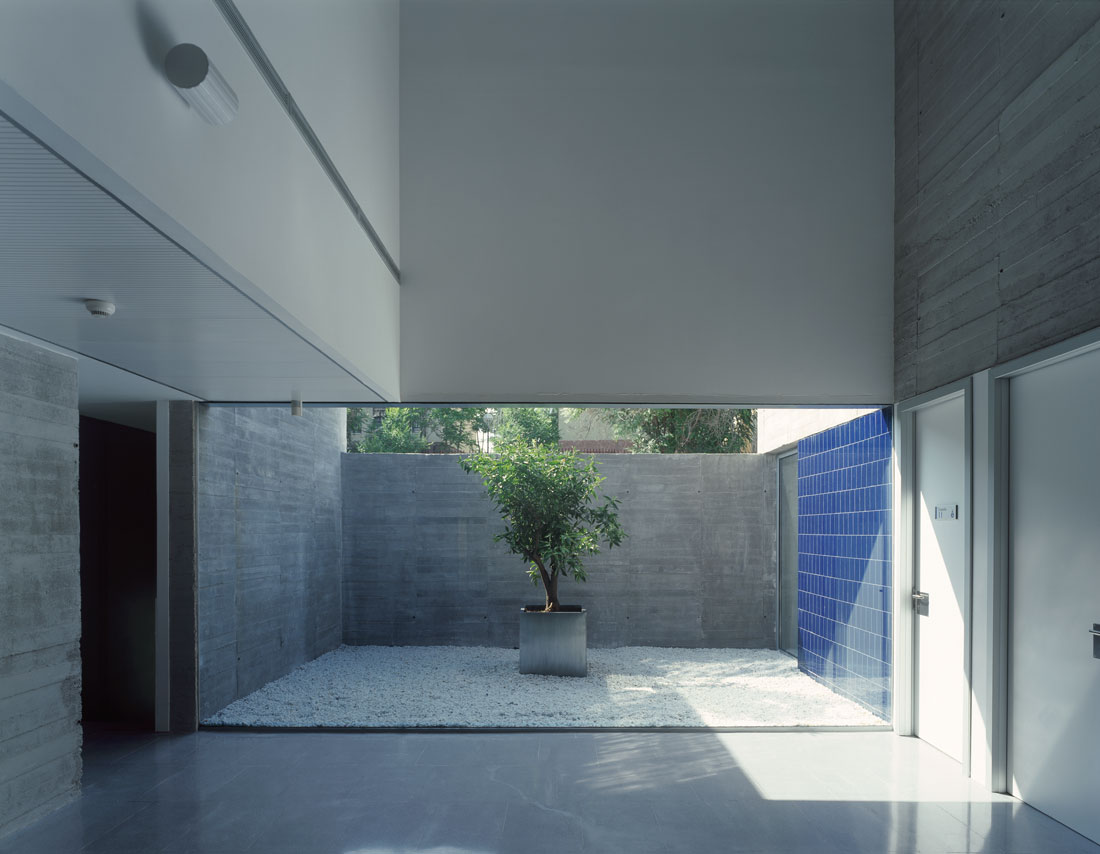 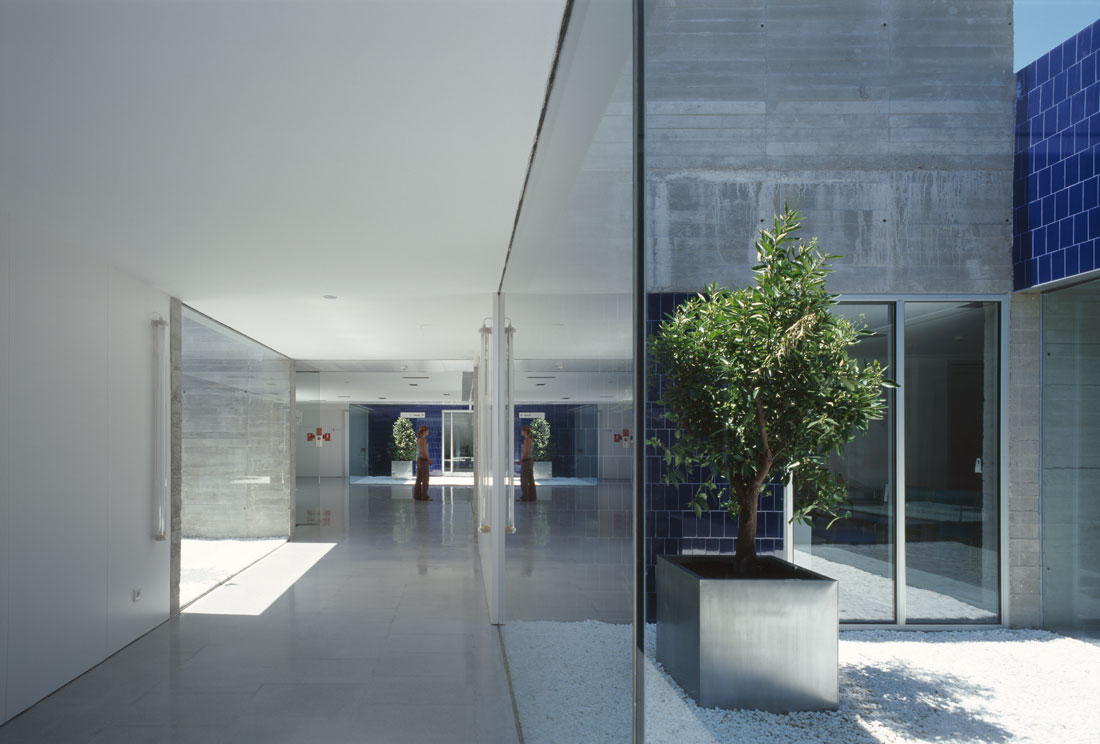 In this compact geometry, common in multi-cellular clusters, the perimeter shape is not really what matters since a different perimeter would not have made any difference. What matters are the connections between pieces: a bottom-up configuration in which “the plan” (understood as strategy) proceeds from within to without.

These two realities or conditions explained here as separate questions – interiorness and exteriorness – are apparently opposites to be reconciled: space and its qualities of enclosure and infiniteness. On the one hand, a very particular relationship with the exterior occurs within the expanded interior public space. And, on the other hand, the hermetism of the outer shell contains, provokes and preserves that condition as a vessel. 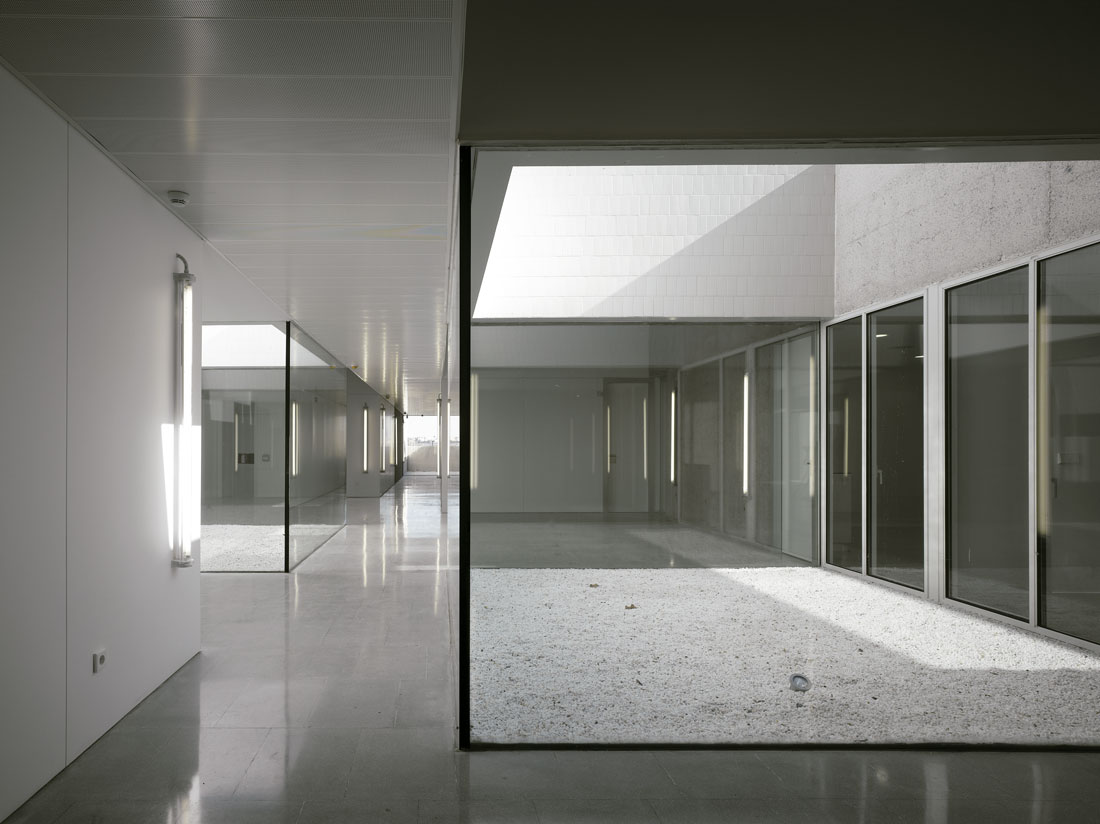 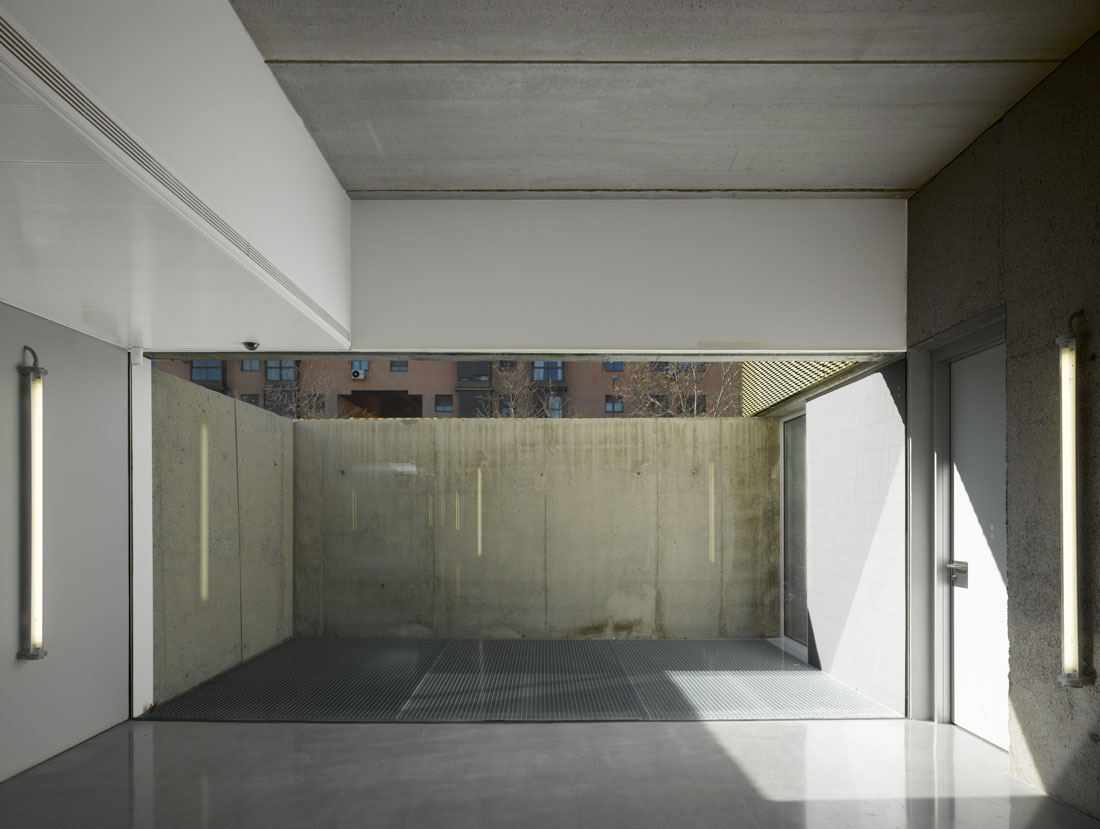 The absence of hollows in the vertical walls of the exterior enclosure causes the relationship between the interior and exterior of the building to occur vertically, almost with the sky above.

Courtyards bring the light inside the building and help to create a spacious and luminous interior, blurring the boundaries between inside and outside, a dissolution of the built limit. The transparency and mirroring qualities of the glass surfaces also create multiple visions, presences and absences, by reflected symmetry. 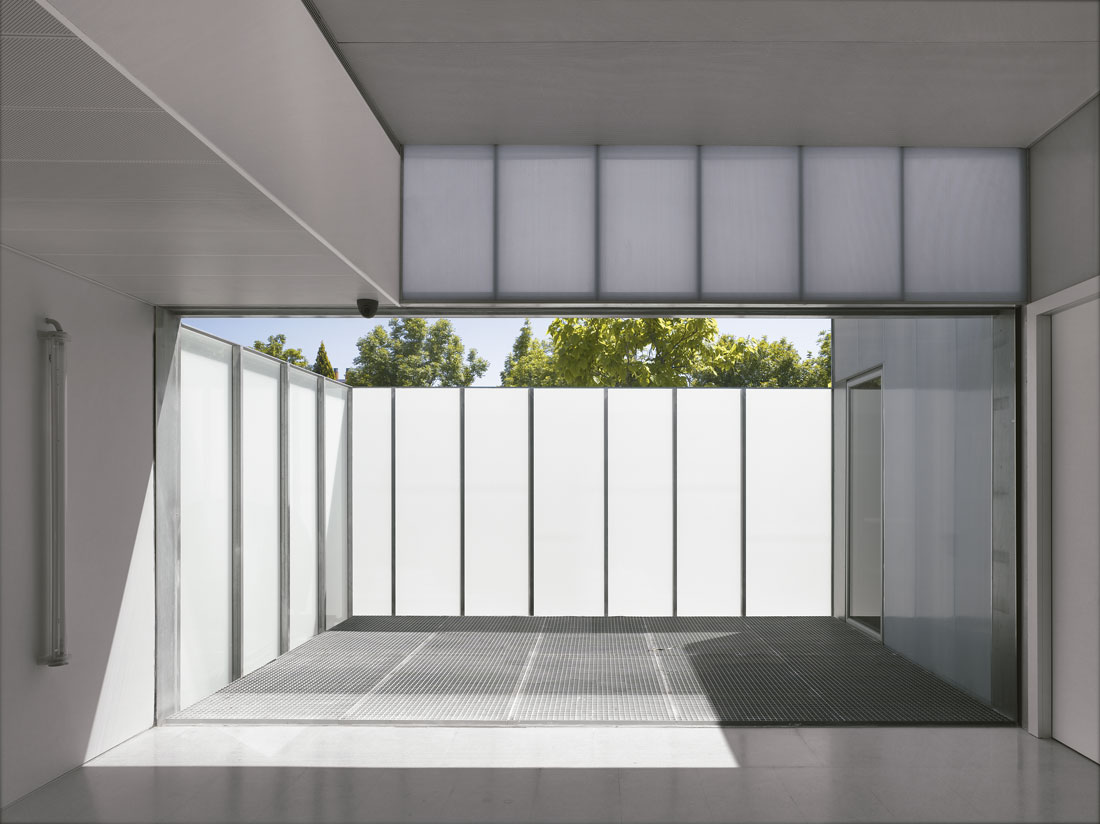 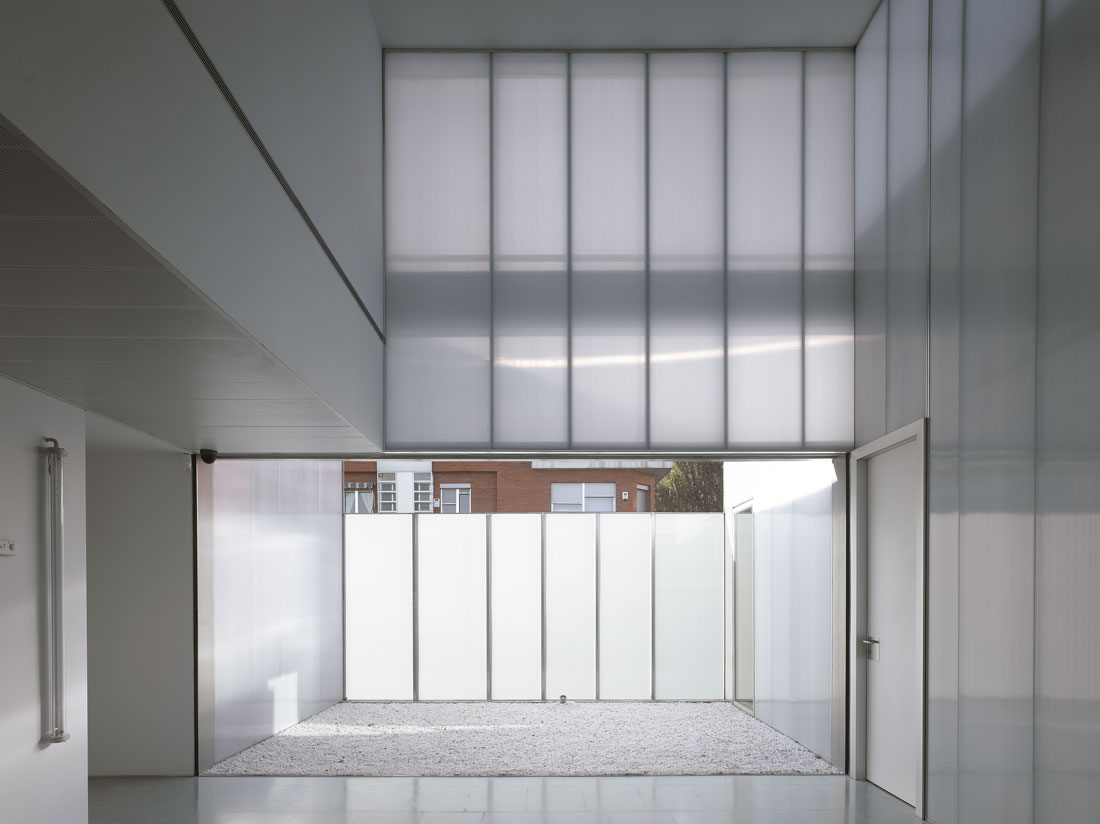 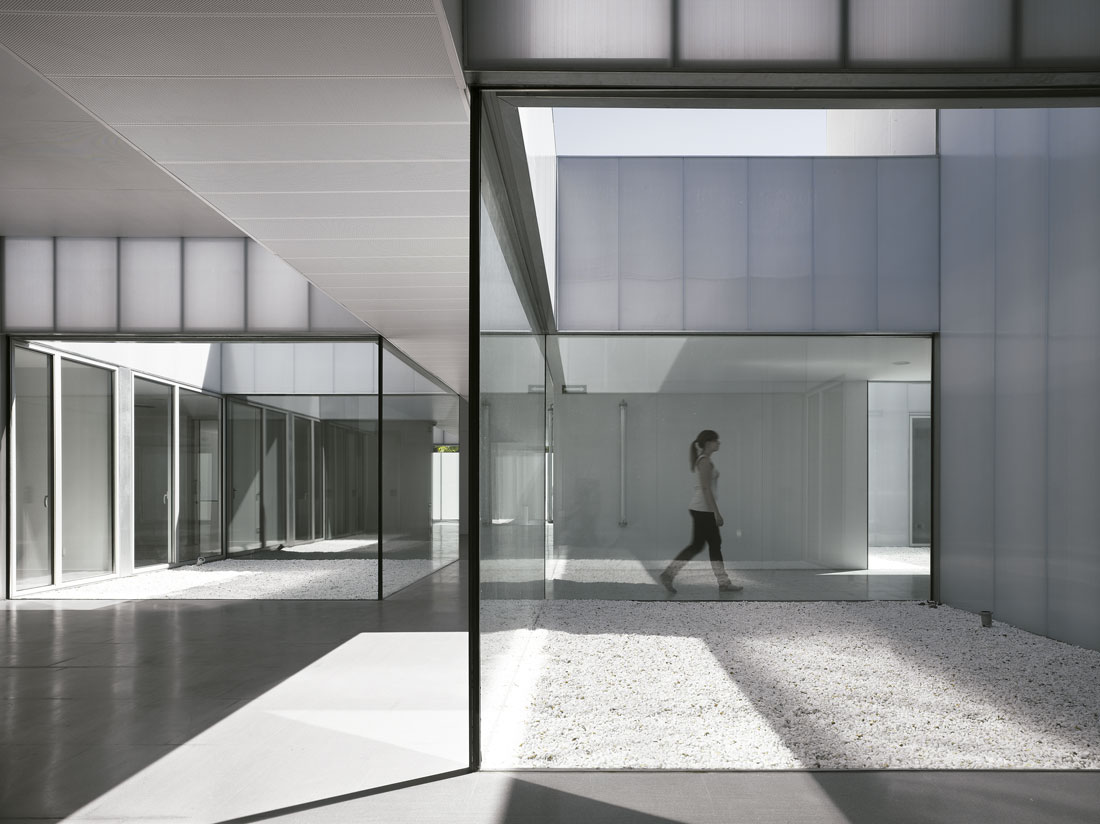 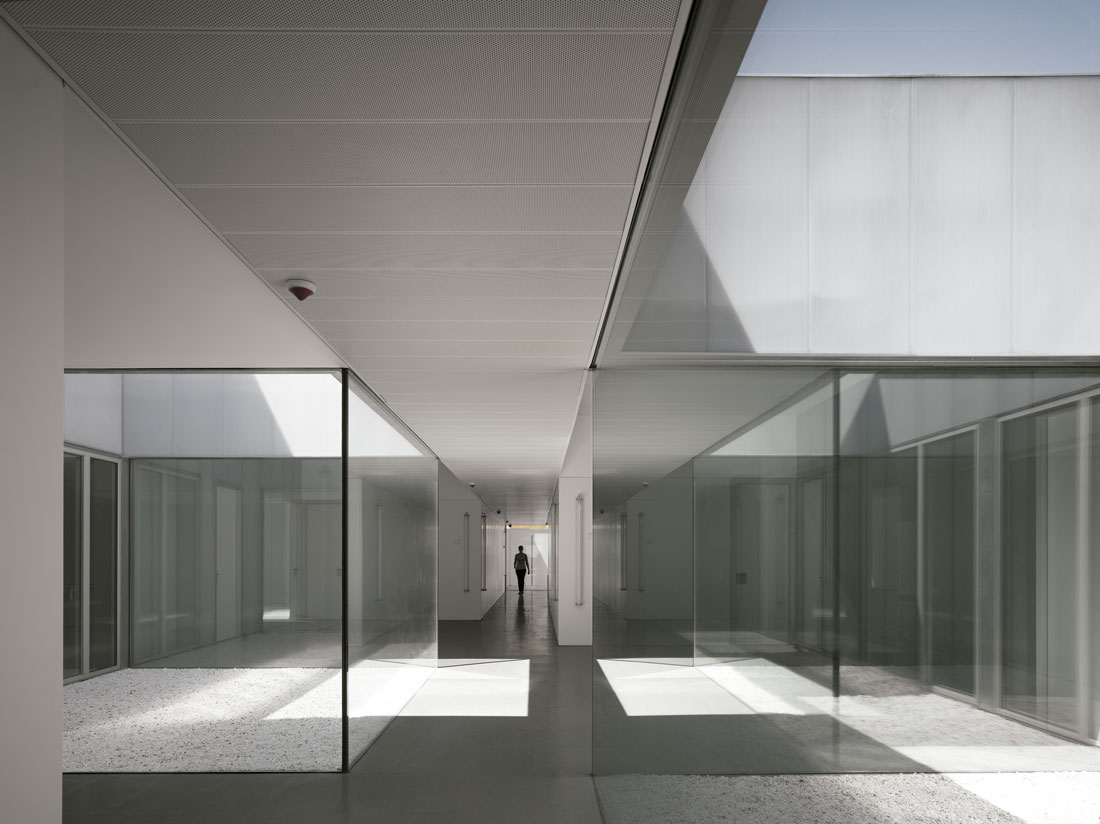 In addition to being described as an equilibrium of opposing forces, the building can be also described as a box, but a very specific one. The roof plane behaves as a sensitive membrane and actually becomes the fifth (and only) façade, allowing the building to breathe, where volumes containing double heights or services rooms emerge channeling light into the interior.

These volumes (both added and subtracted) are not exactly consequences of formal decisions; they are part of “one among many” possible results of playing by the rules. The rules regarding program and structure (spatial and load-bearing) provide certain surprises in the 3D that are as well-received as they are unexpected. 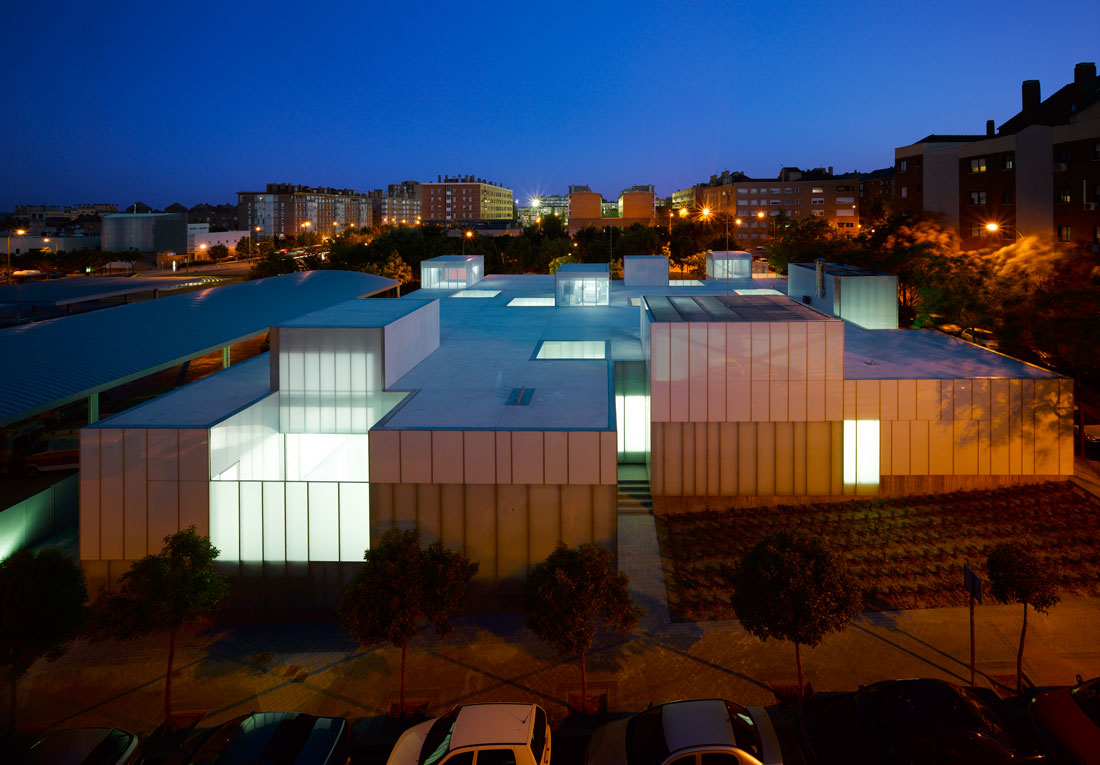 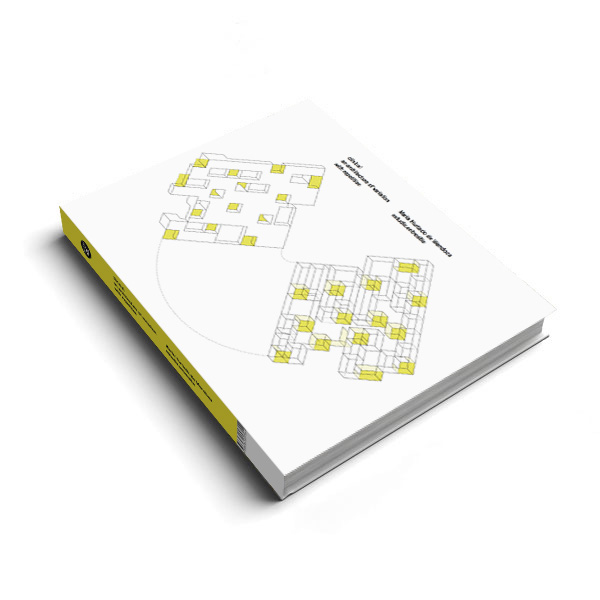 « The Origin of Stripes
Doing It Better: An Architecture of Variation with Repetition »