The indigenous Gurindji people pioneered the Australian land rights movement, protesting against their exploitation by an international grazing company that had stolen their land and forced its people to work for low pay and in terrible conditions. In August 1966 the Gurindji walked off the Wave Hill Cattle Station and went on strike over the mistreatment of their people and their land. Their defiance attracted increasing levels of support until their claims were recognised in a ceremony in 1975. Bower Studio was invited by the Gurindji to help commemorate the 50th anniversary of the ‘Wave Hill Walk-off’ by helping design and construct three pavilions along the heritage-listed trail. In 2016 a team of students and community members assembled a giant ‘meccano set’ of prefabricated steel ribs and panels, seating and landscaping elements that interprets the Gurindji’s stories and attachment to their land. Each of the shelters uses the same architectural language but is unique to the landscape and stories at each site. They importantly allow the ground to pass through the structure. The pavilions act as a focal point for visitors and the Gurindji alike and help maintain the ‘track mob’ ’s legacy as pioneers of the land rights movement. They are memorials, shelters and places for the transmission of knowledge. 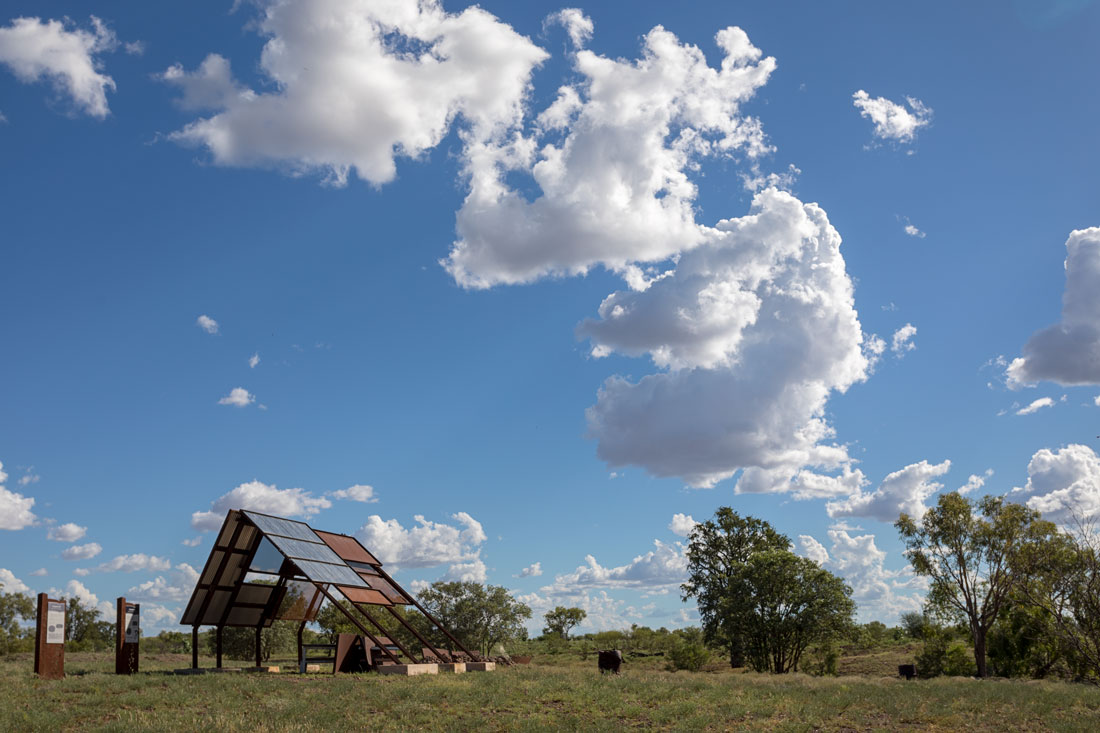 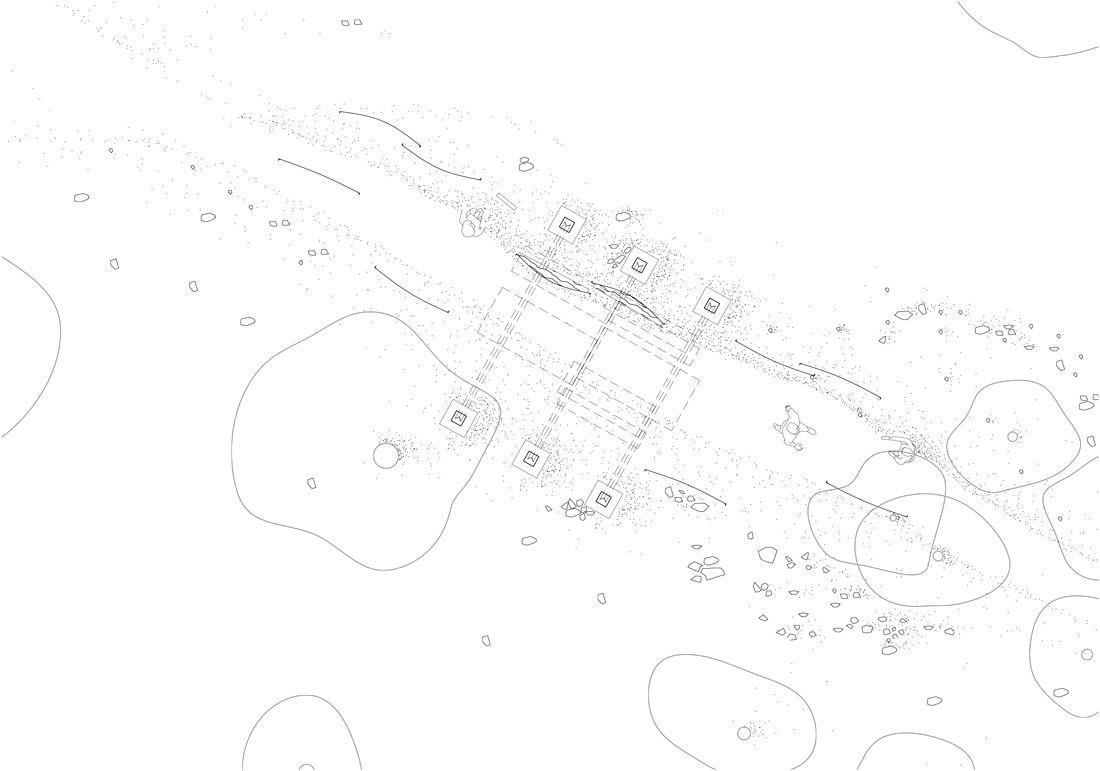 The Walk-off story has become a powerful narrative both nationally and internationally and the Walk-off pavilions are the first physical representation of this event. The pavilions reflect the Gurindji’s stories as told to the design team which were then reinterpreted. The first pavilion, located at Jinbarak, focuses on the direction taken by the Gurindji as they began their 22 kilometre journey via Junani (second pavilion) to their settlement at Wattie Creek and Kalkarindji (third pavilion). Curved sheets of corten steel and corrugated iron placed through the landscape mark the pathways from, through and to the pavilions and reveal the path taken by the Gurindji fifty years ago. The three pavilions track only one portion of the Gurindji’s stories but highlight their struggle and journey to repair their lands and spirit in the face of the dislocation and disruption of European colonists. 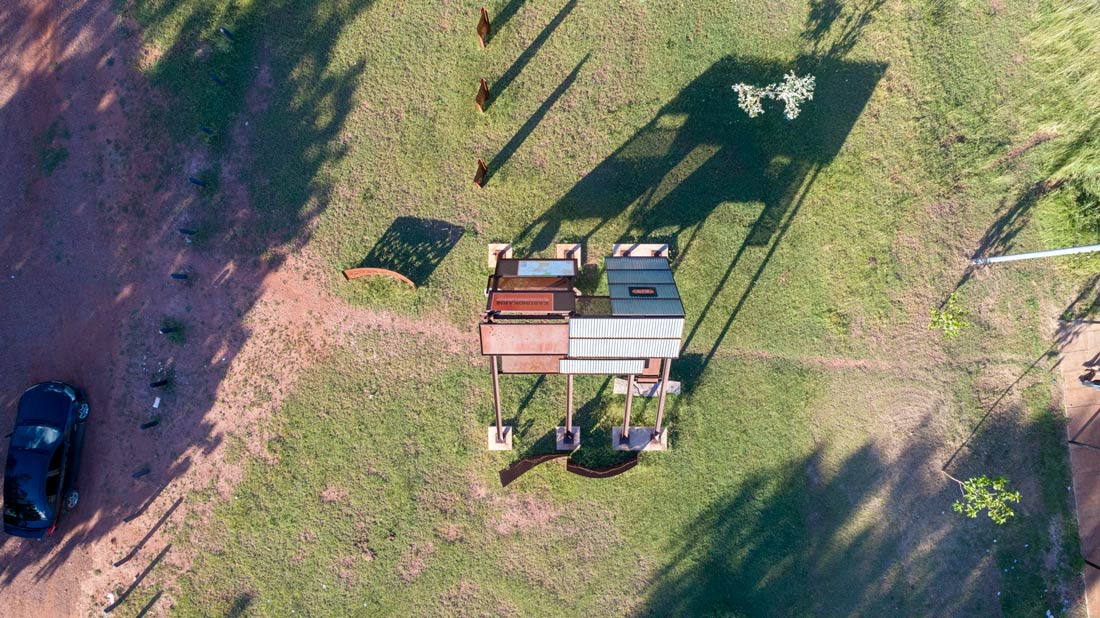 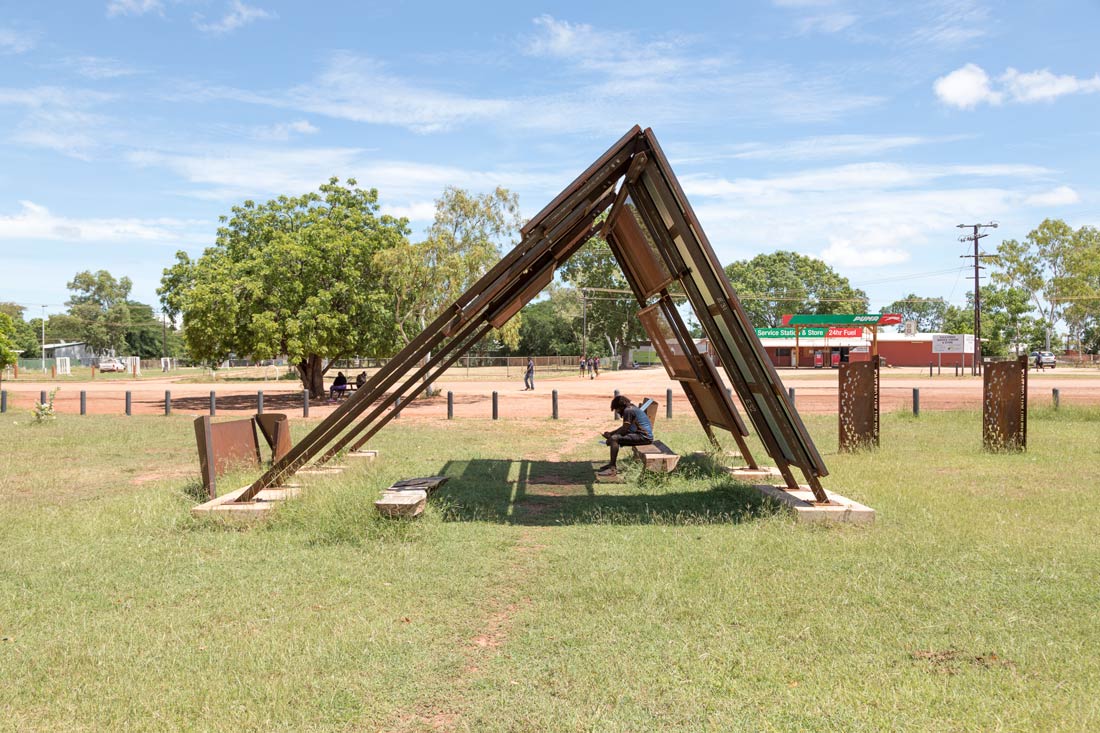 As the discussions of a strike and walk-off gained momentum the Gurindji moved from the Wave Hill Cattle Station and walked to their ceremonial lands on the banks of the Wattie Creek near Kalkarindji. Here, away from the control of the cattle station owners and the cattle that was destroying watercourses and grasslands that had sustained them for over 65,000 years, they were free to reconnect with their traditional ways of living and make plans for an autonomous future. Moving from Jinbarak (Wave Hill) the Gurindji repaired connections with traditional lands and the ceremonies attached with their lands. However, they had been forced to make significant compromises as the loss of tribal lands at Jinbarak had severely curtailed their capacity for traditional hunting and gathering ways and the practising of ceremonies upon that land. Furthermore, many families became refugees on another tribe’s land.

Maintaining deep connections to the land is of paramount importance to Australia’s Indigenous people and has both pragmatic and spiritual dimensions. Whilst the Gurindji’s brave stand for land rights and an independent homeland was recognised in 1975 it was impossible to rewind the clock and erase the physical effects of European settlement upon the land. Nowadays cattle grazing continues at Jinbarak but not at Kalkarindji – where the land is spared, the waterholes remain clean and the land rejuvenated. Spiritual repair is another dimension to the healing process and recognition of the Gurindji’s resilience has been formalised with the construction of the three Walk-off Pavilions. These pavilions are used to celebrate the Gurindji’s role as pioneers of the land rights movement in Australia and as a sign of the healing process. The pavilions emerge from both the landscapes as well as the Gurindji’s narratives regarding place making and story telling.

The Walk-off Pavilions are one part of a larger project to help repair and rejuvenate the lands of the Gurindji people. The introduction of cattle nearly 100 years ago led to the loss of significant ecosystems and biological diversity. Cattle and horses devoured much of the delicate plant life – particularly along the watercourses. Introduced dogs and foxes wiped out many native species of fauna. Once the Gurindji highlighted their dispossession and were ultimately successful in their land claims, efforts have been made to restore their place as recognised owners of the land. The acclaimed Indigenous Rangers Program employs Gurindji people as both custodians of the land and as teachers who share their knowledge with the younger generations and with visitors. The Rangers and Elders use the Walk-off Pavilions as an informal classroom space where this knowledge can be shared.

This project and the Bower Studio implement ‘design make’ processes (as does the Kullark/Coolart project – included in this book – for the bird hide building), where architectural students are involved in the design project learning, and often design project making. The exposure of the students to the process improves cultural awareness where Indigenous people are consistently involved in the Studio prior to students heading out on field projects. And they are exposed to remote community partnerships, as well as complex issues of land relationships, desert ecology, economic enterprises and Indigenous cultural sustainability in remote Australia.

The reader may like to watch the documentary of the Wave Hill Walk-off story: Ripples from Wave Hill, directed by Elton Rosas and Jeremy Boylen.