Waste is a Design Flaw

Increasingly, designers are considering opportunities unique to place, along with the broader consequences of their design decisions. Architects are designing buildings to conserve energy and water and take advantage of available sunlight and rainfall. Civil engineers and landscape architects are designing our sidewalks and tree pits so instead of overloading sewer systems, stormwater soaks back into the ground. Urban planners are designing inclusive public spaces that help forge social connections and lead to healthier, more resilient communities. We can also design the built environment to support the stewardship of materials.[1]

A lichen is made up of two organisms—an alga and a fungus. They can both live alone, but when conditions are tough they collaborate and become much more resilient. According to Robin Wall Kimmerer, botanist and author “In a world of scarcity, interconnection and mutual aid become critical for survival. So say the lichens.”

NYC Parks’ Bushwick Inlet Park facility uses sunlight for electricity and the ground as a heat exchanger and collects rainwater for reuse.

Every day, tens of thousands of trucks full of packages of food, clothing and other products enter New York City to be delivered, unpacked, and consumed. And every day, approximately 24,000 tons of discarded material leave the city as waste. The consequences of this constant material flow through our streets and buildings are substantial: Trucks crowd our streets, creating air pollution, traffic accidents and climate change. The infrastructure that consolidates these materials for processing and disposal disproportionally affects disadvantaged neighborhoods, where asthma levels far exceed city averages.[2] 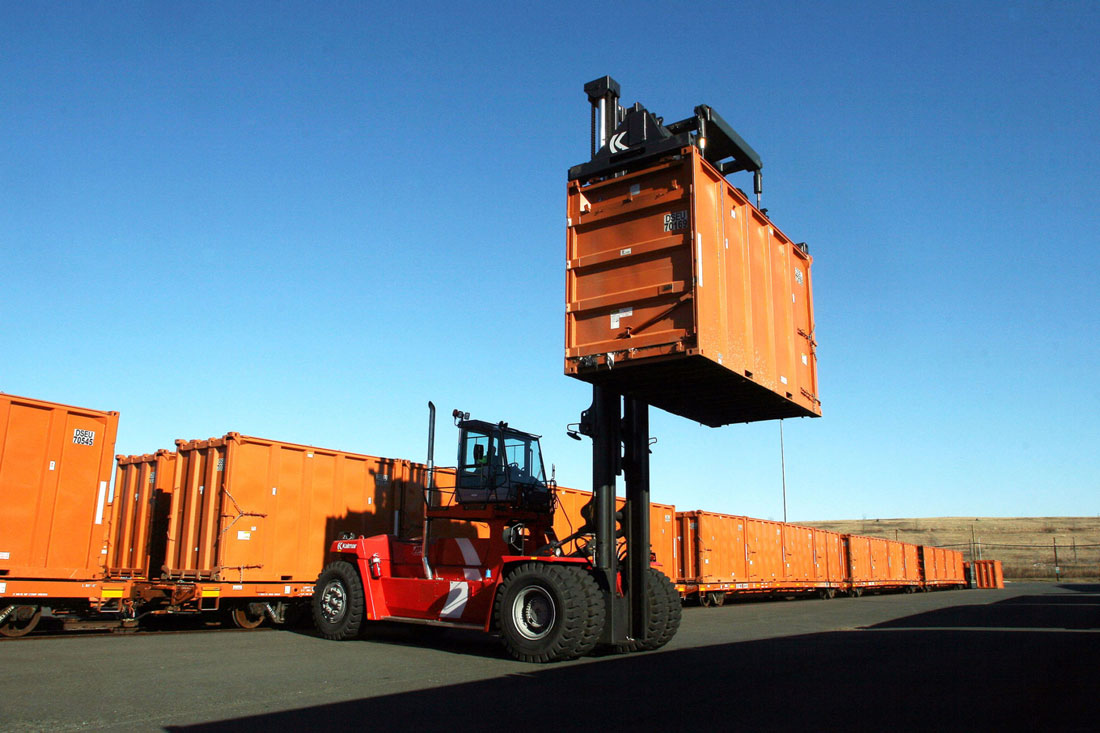 Containers being loaded onto railcars at the Staten Island Transfer Station for transport to a landfill in South Carolina.

Since 1989, when NYC’s first mandatory recycling law passed, a portion of the city’s discards have been recycled. Some of this recycling takes place locally—notably, at the Pratt Industries paper plant on Staten Island—but the majority of these secondary commodities are sent to be processed hundreds or thousands of miles away. More recently, a fraction of the city’s waste stream has been composted. Everything else, (about a third of which is organic), is trucked or shipped by rail an average 300 miles away, mainly to landfills but also to some waste-to-energy incinerators. This disposal costs the city upwards of $350 million a year. And for the next 20 or so years, the decomposition of the organic waste in the landfill will release methane, a greenhouse gas 30 times more potent than carbon dioxide.[3]

The upstream environmental consequences of extracting raw materials from fields, forests, mines and wells and turning them into products that are transported to our doors for consumption are vast. This process, which generates 60 times more waste than we throw into the bin, absorbs significant quantities of energy, water and human effort. The rare metals we need to constantly update our electronic devices are extracted from hazardous mines, often by children. Much of our clothing is produced in inhumane conditions to meet the rising demand for cheap, disposable fashion. This consumption disproportionally affects the global poor, whether through pollution, labor violations or climate change.[4] 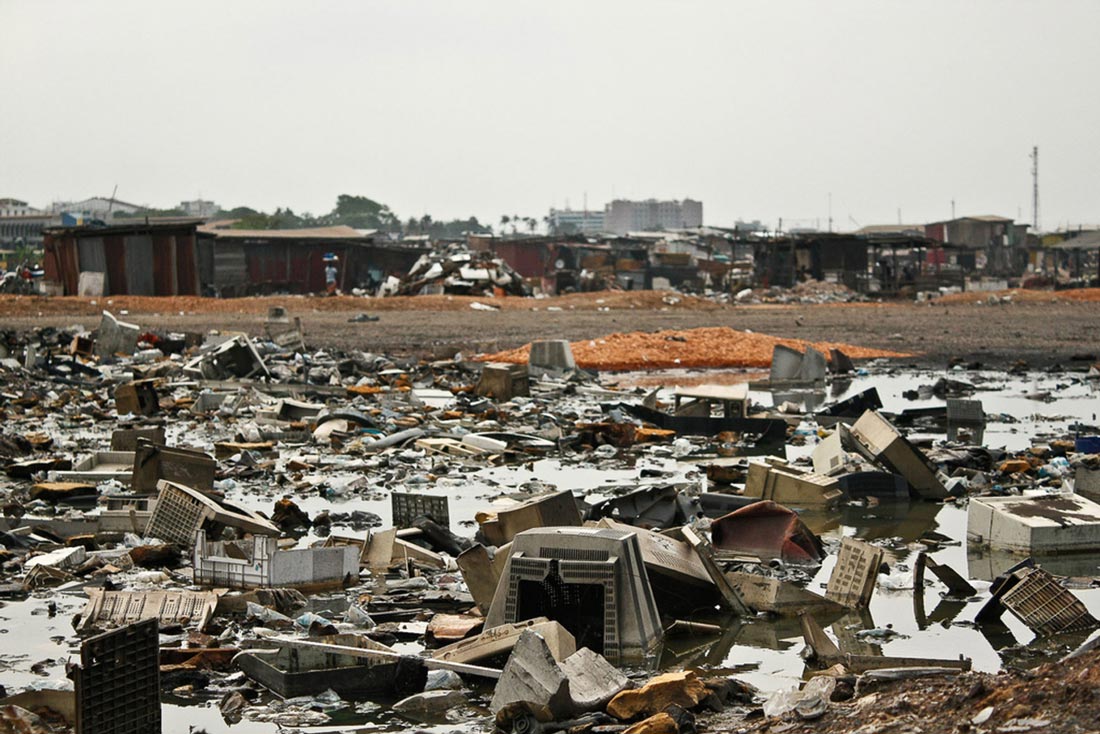 Over the last 30 years, we have depleted a third of the earth’s natural resources, and we’re at risk of exhausting them entirely. A recent United Nations report drew attention to a worldwide shortage of one of the most ubiquitous substances: sand. Ever escalating development has consumed it in concrete, asphalt and base courses for buildings and roads; sand is also used to make glass. In seeking more sources of raw materials, we have discovered that some landfills have a higher proportion of valuable and recoverable metals than do some ore deposits we’re mining. European countries are starting to mine landfills, to recover metals, energy and the land itself. Couldn’t we design a better system for using our finite resources?[5]

NYC’s ambitious plan for the future, entitled “One New York: The Plan for a Strong and Just City,” (2015) aims to move the city toward circular material loops. Expanding upon 2007’s PlaNYC, the vision encompasses growth, equity, sustainability and resilience. The goals include having the best air quality among large US cities, reaching zero traffic fatalities, reducing greenhouse gas emissions by 80%, lifting 800,000 New Yorkers out of poverty, creating stronger communities and sending zero waste to landfills by 2030. To develop the goals cross agency working groups envisioned how reshaping the physical city could address a range of social, economic, and environmental challenges on the municipal and regional scale.[6]

The diagram below gives us a view of the waste DSNY manages, which is residential waste as well as many institutions’ waste. A similar amount of waste generated in commercial buildings is managed privately, but there is not enough reliable data to include it in the diagram. 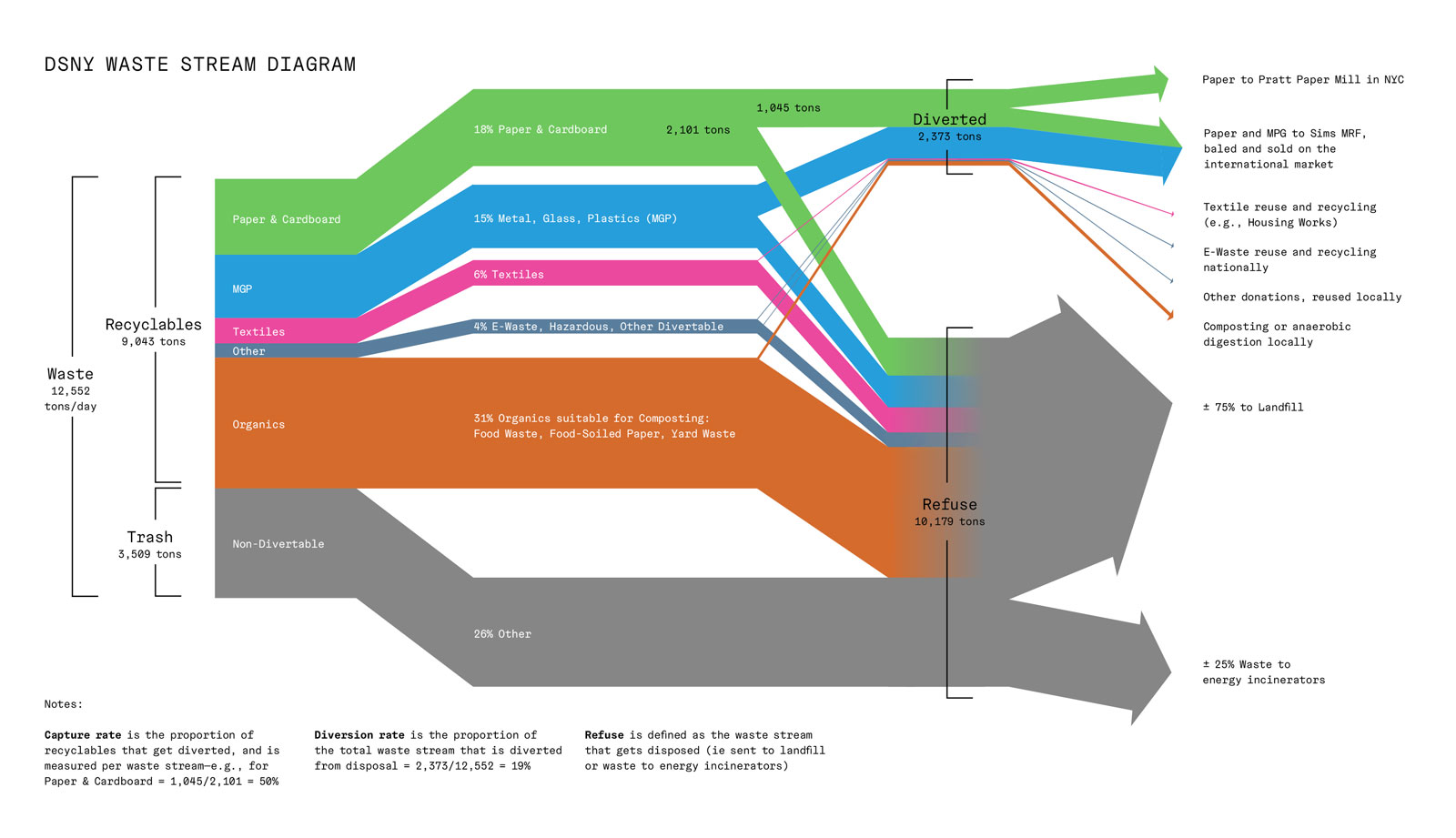 Right now, we are far from zero waste. Although paper recycling and the separation of metal, glass and plastic (MGP) are mandatory, only about 50% of such materials are separated in our buildings. And although NYC has expanded its organics collection program to 2 million residents, only a small fraction of our organic waste is diverted.[7]

As the diagram shows, there are various ways to reduce the volume of materials sent for disposal so that by 2030, the volume will be just 10% of the amount we landfilled in 2005. These include:

– Reducing waste generation, especially types of waste that can’t be processed for reuse.
– Collection of additional recyclable materials—such as organics, textiles, bulk reuse and carpets.
– Increasing capture rates of recyclable materials so that more of each material stream gets diverted rather than disposed.

DSNY is developing policies to implement these approaches (see Chapter 2). Designing buildings to accommodate these policies will be critical to their success. Items that can be reused directly should not enter the waste system. Organics separation should be convenient and hygienic. Recyclable materials must be separated correctly and protected from weather, else they may end up in the landfill. Financial incentives must be passed on to individual households or businesses if behavior is to change. 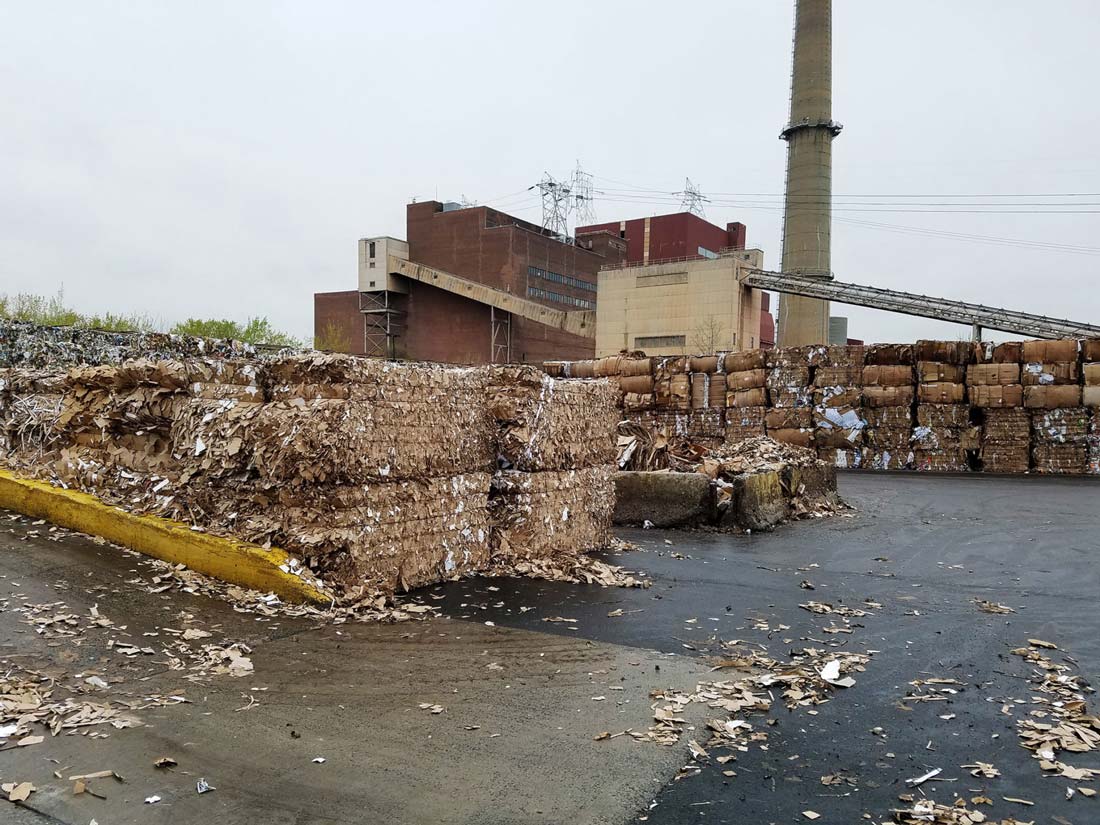 Rarely do architects have the opportunity to spend time in a finished building to see how well it works. In developing the guidelines, we talked with those who manage waste and followed its path from initial disposal to setout for collection; this allowed us to gain a micro level understanding of the process as it unfolds according to each building’s unique circumstances. 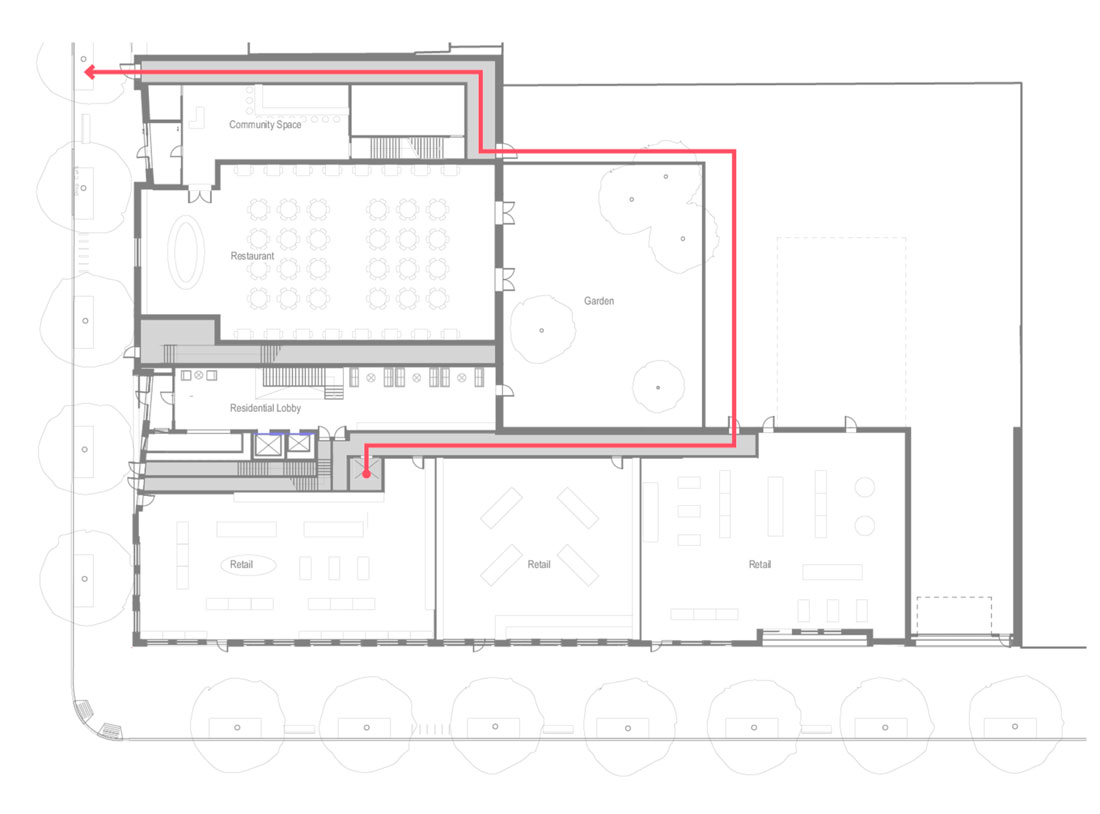 Example of a circuitous route for waste setout in the grey space of a plan.

We saw many buildings whose procedures for materials flow were lacking. Storage was inadequate and too far from the setout location, routes were circuitous, waste had to be set out in a tree pit or in front of the entrance, and the disposal of recycling and organics was far less convenient than trash disposal was. Some of these situations resulted from architects’ oversights while others came from changes developers made during construction, to give more space to commercial tenants. We saw that these situations introduced points of friction into the system, frustrating workers daily and often leading to ad hoc suboptimal solutions,
all of which reduced the diversion of designated recyclable streams.

Over the course of these visits, we noticed a common thread among successful buildings. When the whole team communicated—management, staff, occupants and haulers, DSNY and private alike—and members worked together creatively, problems were solved and all players felt engaged and motivated to improve the system. (See StuyTown, Strivers Gardens and Etsy case studies.)

Many staff members remarked on the dramatic rise in the quantity of cardboard. When not neatly stacked or baled, it filled waste rooms or overflowed into corridors and blocked access to service areas and exits. We saw many buildings producing more waste than could reasonably fit on a sidewalk. We saw residential buildings managing their wastes well but observed that adding a separate organics collection would be a challenge, because the trash rooms were either too small or unventilated, or because staff would have to maintain many small containers and return them inside after collection. Clearly some things must change if the city is to reach its zero waste goals. 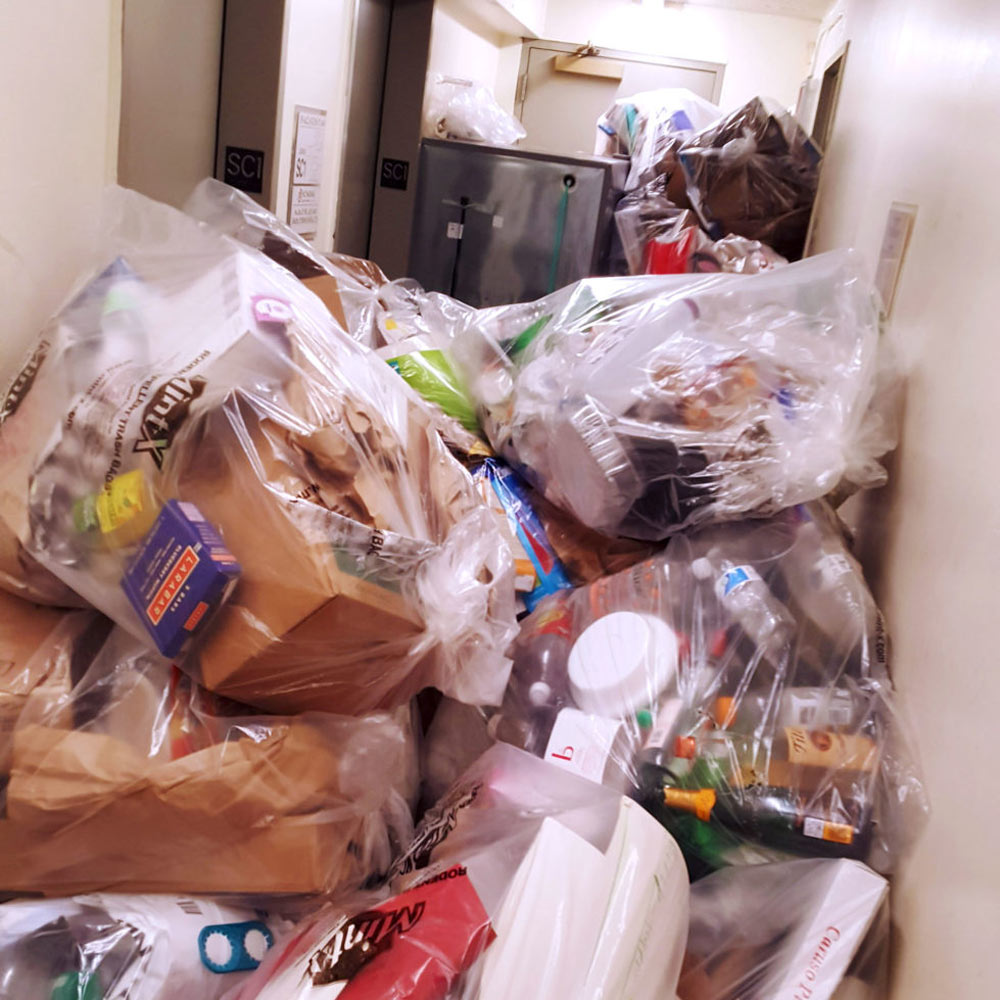 « Bottom-up Processes for the Public Space
How Can Design Help Us Change the System? »