Excerpt from Thermodynamic Interactions: An Exploration into Material, Physiological and Territorial Atmospheres, 2017. Published by Actar Publishers.

During the last two decades design disciplines have evidenced a growing interest in energy, which has motivated the gradual introduction of a wide variety of ideas from different disciplines to the fields of architecture, landscape architecture and urban design.

Ranging from scientific concepts —e.g. energy efficiency, order through fluctuations or dissipative structure— to applied knowledge —e.g. material logistics or thermal physiological human responses— the range of energy-related phenomena has opened an expanded domain of parallel fields of knowledge which is disclosing new design potentials and opportunities [1], but is also hindering its understanding and practical application.

Thermodynamics, as the field of physics which studies the energy inte­ractions between systems, offers a basic understanding of heat exchanges, explaining how energy is emitted, transmitted and absorbed. The current building energy model —as Kiel Moe [2] has explained— conceptualizes interiors as an isolated energy system with a steady-state behavior. However, the existence of transient energy exchanges between climate, built form and human body, poses the idea that any construction is an open thermodynamic system in interaction with an ever-changing outdoor climate, which questions the steady-state model and introduces architecture into the realm of non-equilibrium thermodynamics.

Contrary to the conservative insulated model, any built environment is an open energy system which is immersed in a variety of dissipating energy flows. Dissipation takes place spontaneously whenever there is an energy gradient —for instance, a temperature, a pressure or a height difference— between a source and a sink. Accepting dissipating flows occur spontaneously and irreversibly, it is also true that these flows can be intercepted by devices that either use them or block them, store them or release them in doses. As a spatial and material construct built form can capture, transport, store and release energy, and thus orchestrate the flows of dissipating heat which traverse it. According to this idea Thermodynamic Interactions is divided in three parts —territorial atmospheres, material atmospheres and physiological atmospheres—, presenting a synthetic cross-section of the range of dissipating flows, sources and sinks which are relevant for designers. 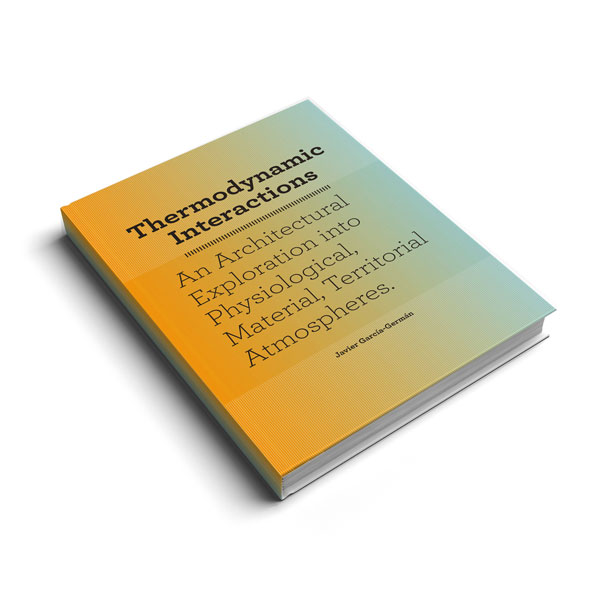