The USA’s most Talked about Cities

Following a study of Europe’s Most Talked About Cities, ING’s new ranking identifies how the USA’s Top 40 cities feature on social media and online news. In a context of rapid change and constantly evolving networks, cities are consolidating their leading positions over entirely new, sometimes digital-only conversations, creating powerful new opportunities for place branding that links digital visibility into a wider communication strategy.

Hundreds of global surveys benchmark the best cities against almost every aspect of urban life. These rankings influence investment, where talent concentrates and our travel choices. Yet there is little comparative research into the impact digital messaging is having on cities as brands.

Responding to this, ING has reordered the USA’s Top 40 cities, based on global city indices, by their share of the online conversation and provided analysis on which cities punch most above their weight and which show the most potential for increasing their digital profiles. The USA is home to more talked about cities (based on their digital visibility) than any other country.

“In a globally competitive world, visibility matters to cities today more than ever before, with many US cities investing heavily into building brands that reflect their attractiveness as cultural, business and education centres. Measuring their digital visibility provides a clearer insight into how these cities perform as brands compared to their peers, where their strengths and weaknesses lie, and how they can work to elevate their profiles.”

– New York City is responsible for over a quarter of the online conversation for the Top 40 cities. London and Paris are responsible for 15 per  cent each in the European sample.

– The Big Apple is four times more visible than Chicago, Los Angeles and Miami. It is captured on Instagram 17 times more than the average for other cities in the Top 40, but only 1.2 times more than London and Paris.

– San Francisco, the birthplace of Twitter, performs comparatively the weakest for its number of tweets.

– While only NYC, LA, Houston and Kansas City have the same ranking, almost half of Top 40 cities show a strong correlation between city rankings and total online mentions suggesting online conversations impact on place branding.

– The USA has more cities near the top of global visibility rankings than any other country, however, Europe’s Top 40 generate 40 per cent more digital mentions than the total for the USA’s Top 40 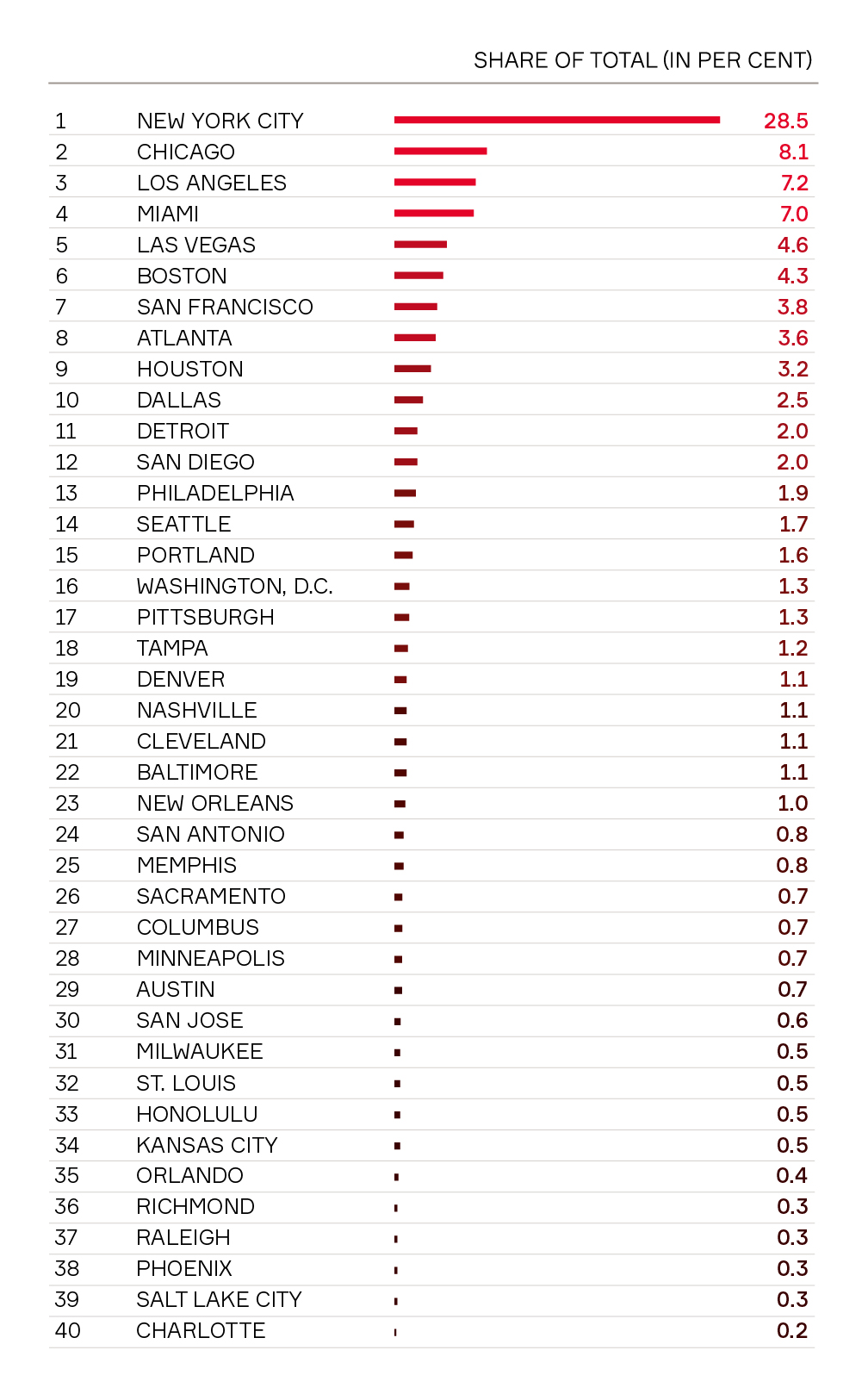 The share of conversation topics provide a window into what people are talking about in relation to each city. While the shares for the Top 5 cities overall are substantially similar, Chicago stands out for having the highest conversation concentrations across three categories: business, liveability and talent. Miami and Los Angeles, major film production centres, feature more strongly in culture.

This chart ranks the Top 40 American cities by global city indices against digital mentions. A downward slope illustrates cities that aren’t necessarily making the most of their stronger rankings, while a rising gradient highlights the cities with the most opportunity to challenge global city rankings. 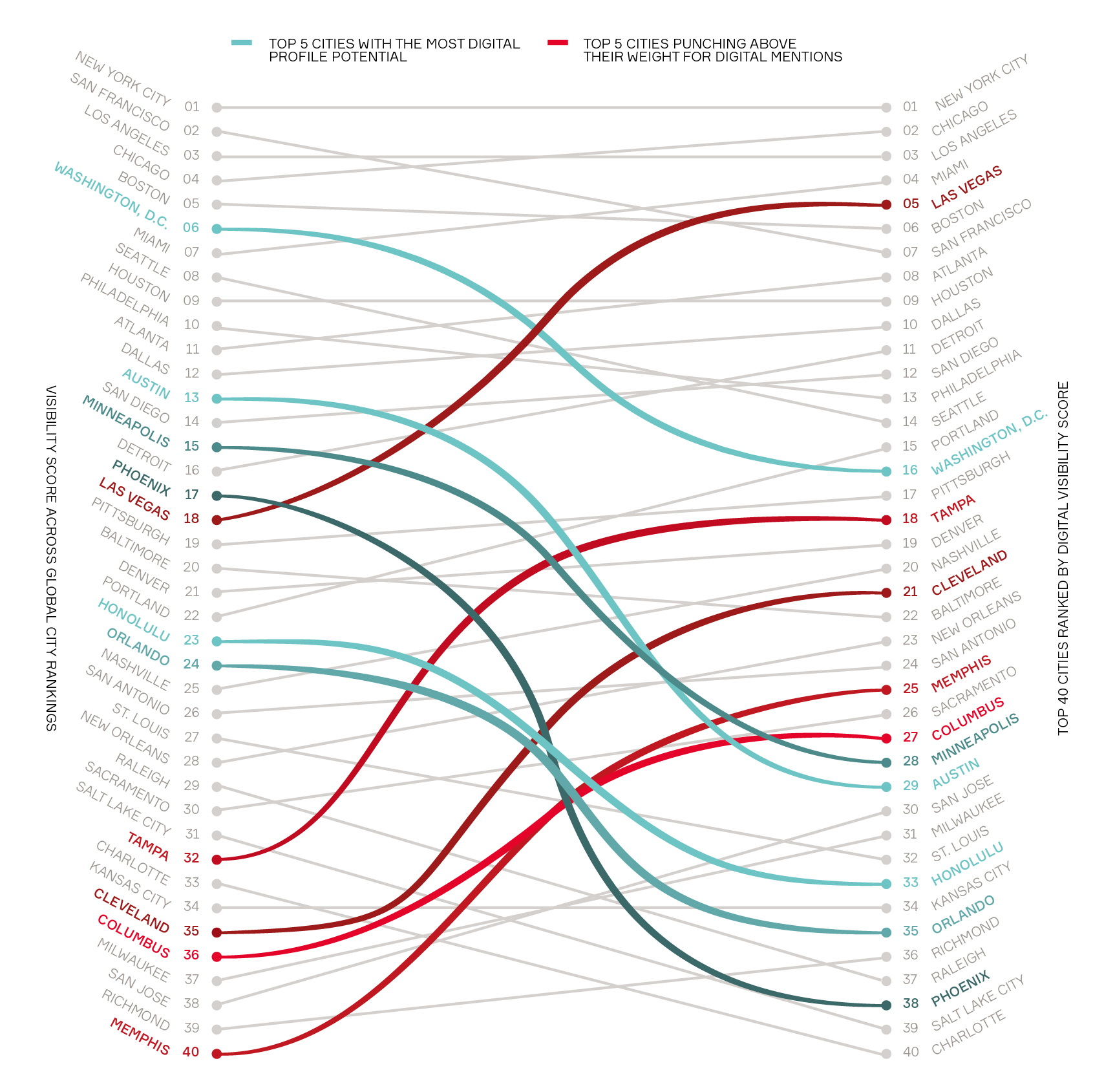 Top 5 Cities Punching above their Weight for Digital Mentions

These cities generate significantly more mentions on digital media relative to their positions on city indices, presenting an opportunity to climb the rankings by consistently improving the quality and impact of the conversations about them.

– None of the Top 5 cities perform strongly for traditional news coverage, but benefit from huge amounts of user-generated content. Las Vegas is third overall on forums and Tampa is 12th on Facebook.

– Memphis has the highest concentration of conversations around talent, but with relatively lower business and technology shares (like Orlando). Cities with higher business category shares tend to have higher talent shares too (like Chicago), suggesting Memphis’s recovery from the 2008 financial crisis may still be ongoing. The USA’s high internal labour mobility may make the business/talent pairing less important, however, communicating opportunity generally includes both.

– Las Vegas’s online visibility ranking is 13 places higher than its city ranking. This is driven by conversations around culture (like Cleveland) and technology.

– Columbus, which has comparatively strong performance on Tumblr, has the highest liveability share.

Top 5 Cities with the most Digital Profile Potential

Global city rankings highlight these as the cities we should pay attention to, but this doesn’t necessarily translate to the digital world, where these cities attract fewer mentions than their peers. These cities have the most potential to grow their digital profiles by building on their strengths.

– Washington, D.C. shows a strong pairing of business and talent, and has the highest score for liveability. Its relatively low culture conversation share may be linked to having the second lowest coverage on Instagram.

– Except for Honolulu and Orlando, which perform strongly on Instagram, all these cities have greater online news visibility, but comparatively lower mentions on social media relative to their peers.

– Phoenix has the highest concentration of conversation around technology, however, its indistinct name (like Austin) limits its digital visibility.

« From the Digital Gap to the AI Barrier: Establishing the Guidelines for a Socially Engaged AI Based City Design
AI for Cities: The Digital Transformation »