The Stairs to Kriterion: An Impressive Landmark

The Stairs to Kriterion are a nod to 75 years of rebuilding Rotterdam. The temporary exhibition offers an impressive landmark for the cultural event “Rotterdam celebrates the city!” At 29 metres tall and 57 metres long, the scaffolding is a response to the angles of the Rotterdam Central Station, connecting the contemporary icon with a historic monument, whilst referencing the reconstruction that the city has experienced through its construction. 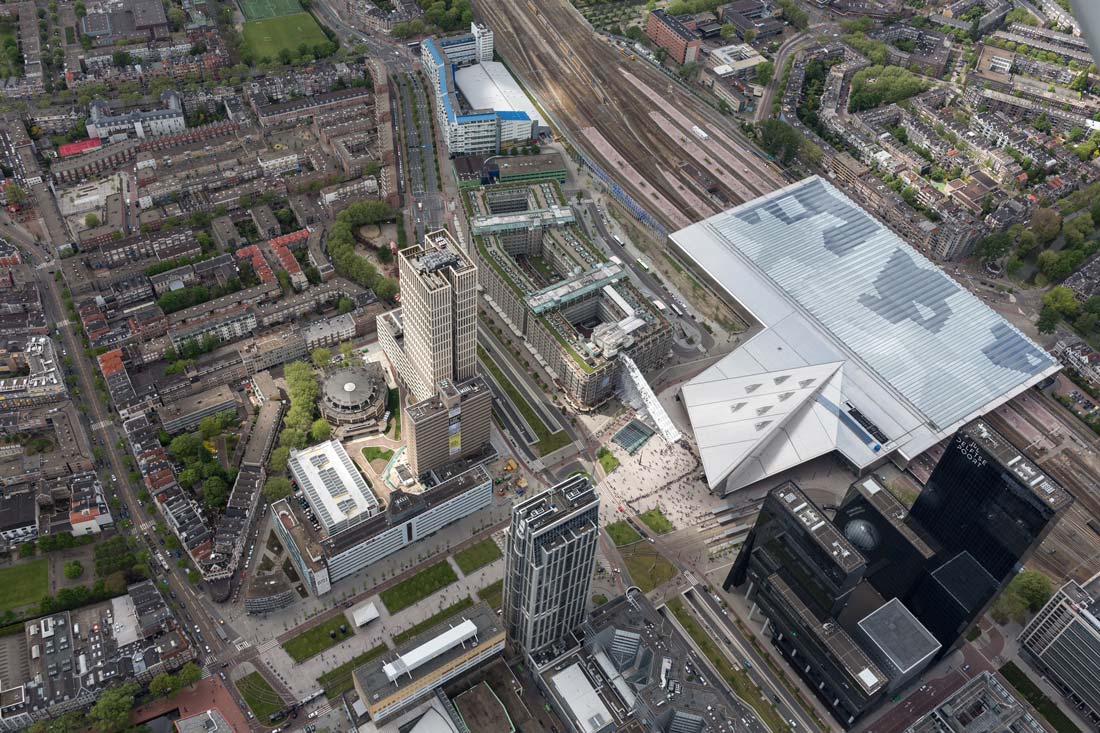 The arrival of The Stairs, a month-long temporary installation celebrating 75 years of reconstruction in Rotterdam, follows the city’s tradition of celebrating reconstruction milestones. Large cultural events often provide beautiful vantage points: such as the Euromast, which was built for the Floriade in 1960, and the cable cars on the Coolsingel for the reconstruction event C70.

“Now we create a new lookout where people can enjoy the unique views of this newly built city. From the cranes in the harbour to the new city centre, the North and Blijdorp Zoo. Fun for everyone,” says Anouk Estourgie of “Rotterdam celebrates the city!” 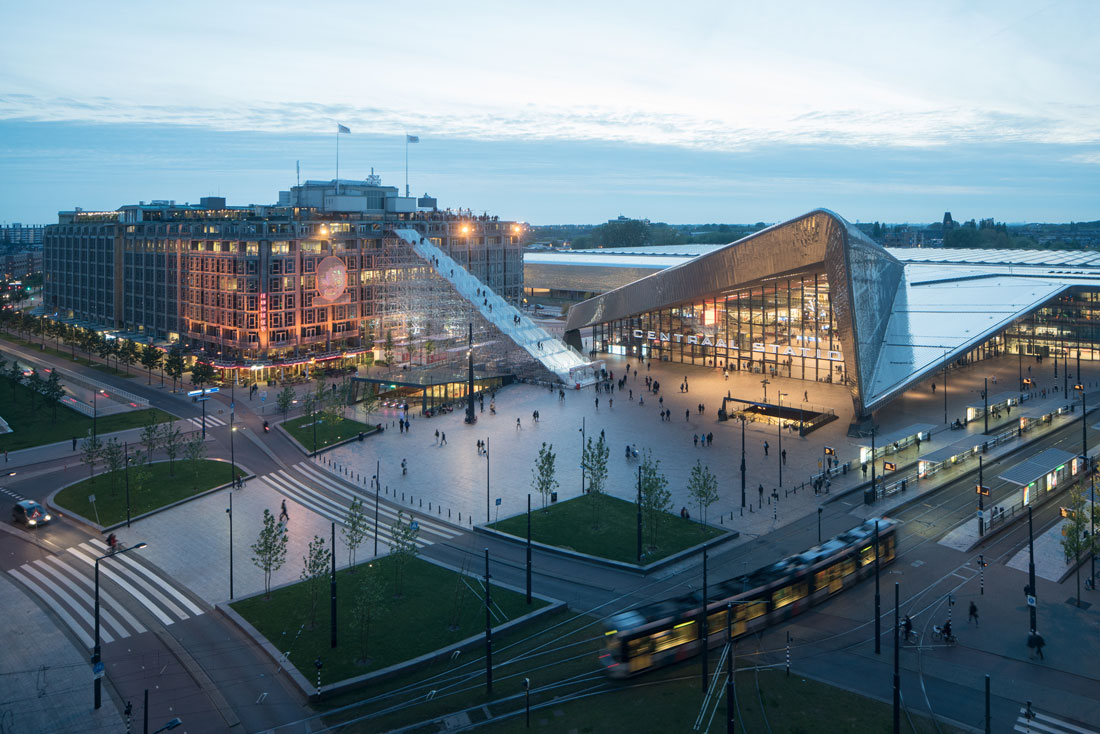 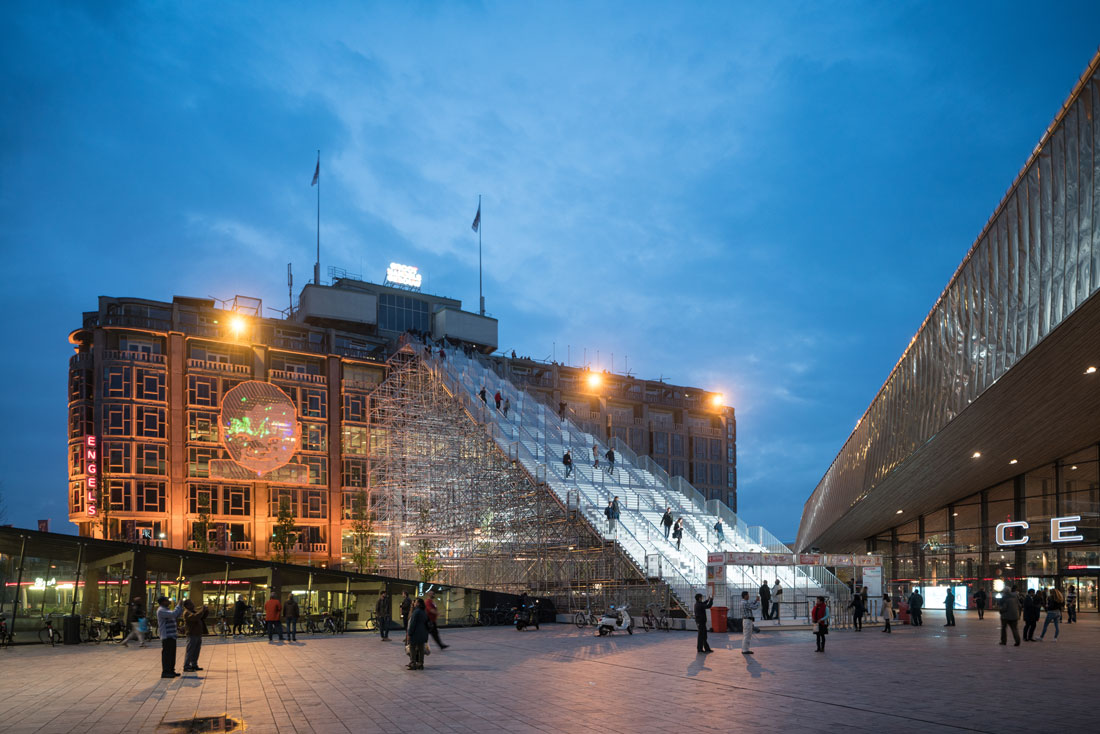 The steps not only offer a progression of perspectives over the city as you climb; they also give access to the roof of the Groot Handelsgebouw. Once at the top, a temporary observation deck gives you the opportunity to overlook the entire city. Also on the roof is the former cinema Kriterion, popular in the 1960s, which opened especially for the event to offer a wide variety of films, debates and performances.

Furthermore, visitors were able to enjoy refreshment facilities and find out more about the city and its development at the information point for the cultural event “Rotterdam celebrates the city!” 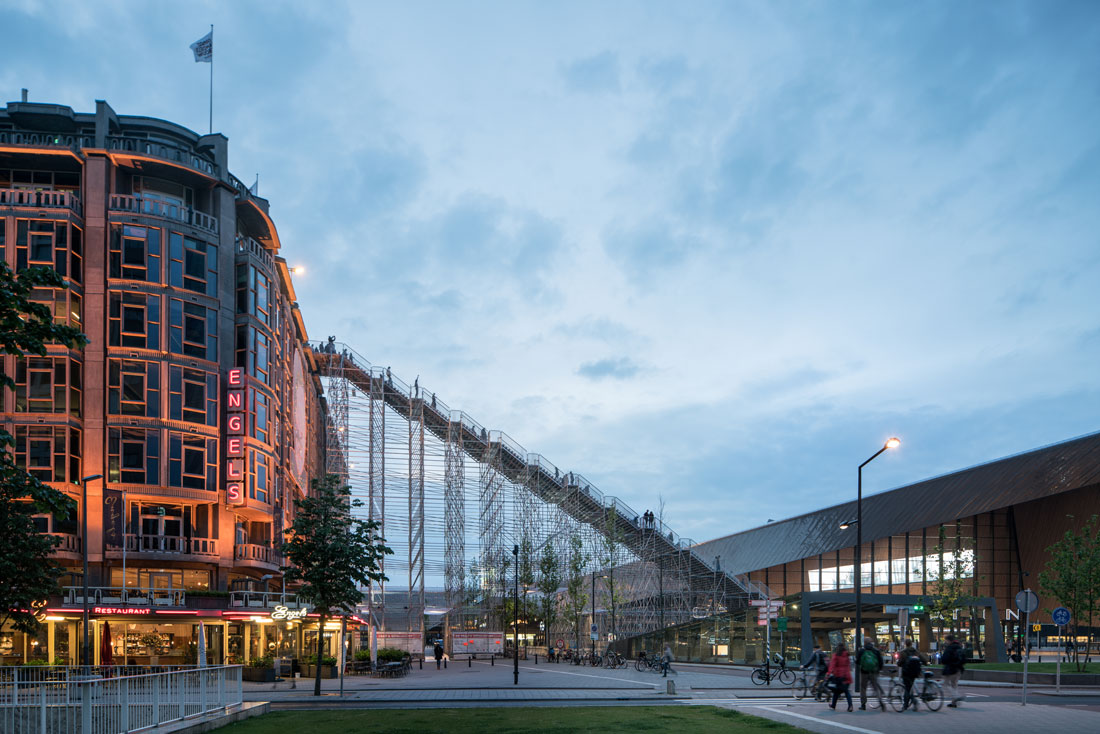 “I used to look at Rotterdam from the Kriterion after the films, and it provided a fantastic overview of the city,” explains Winy Maas, co-founder of MVRDV. “The roof of the Groot Handelsgebouw, one of the best buildings from the reconstruction of the Netherlands, deserves to be used as a base for the next intensification of Rotterdam. The Stairs suggest that.” 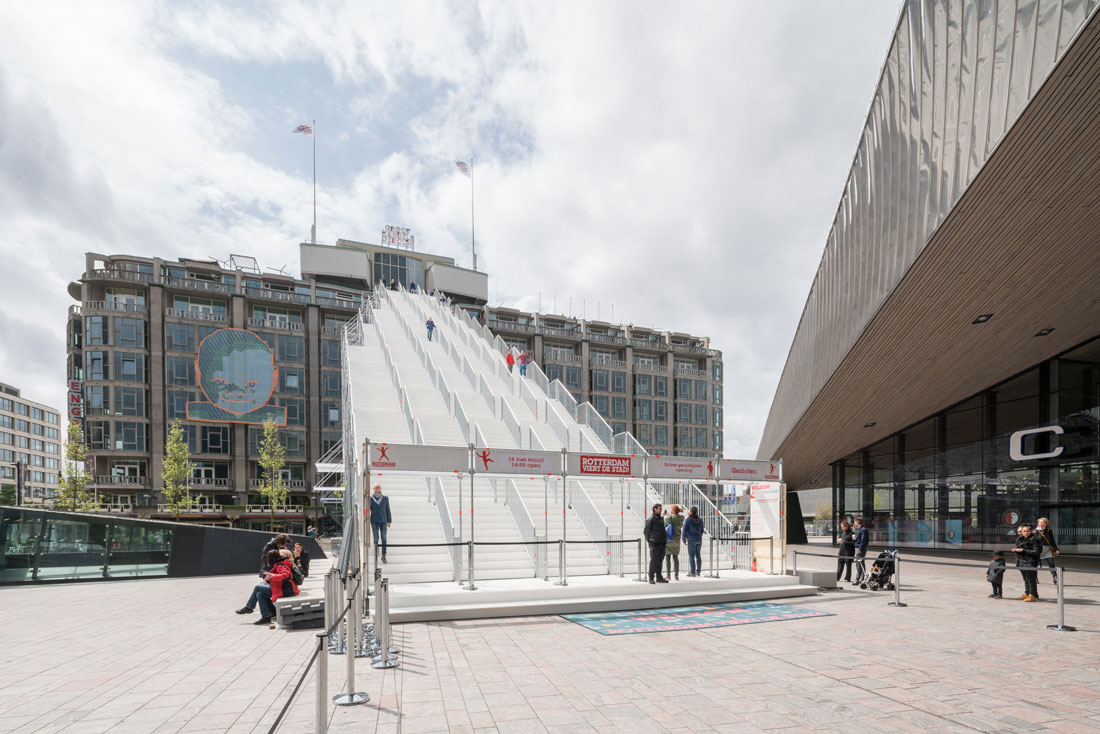 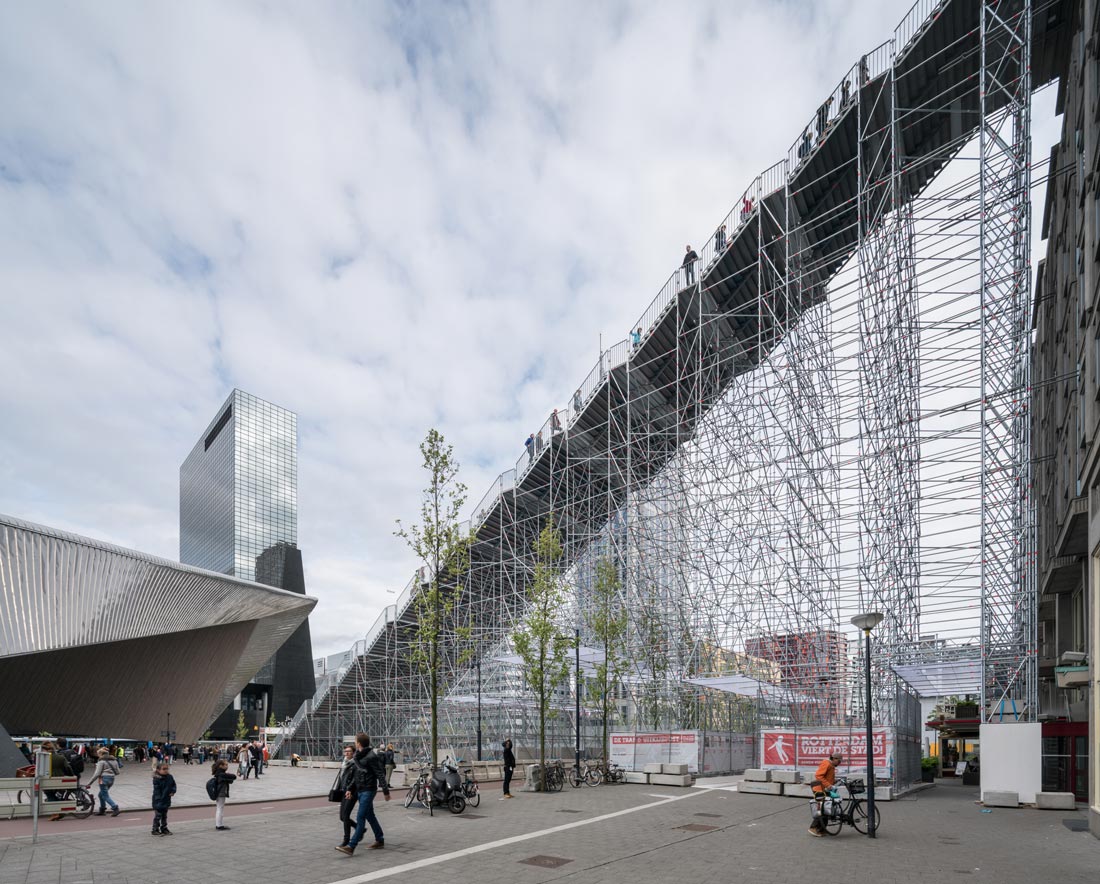 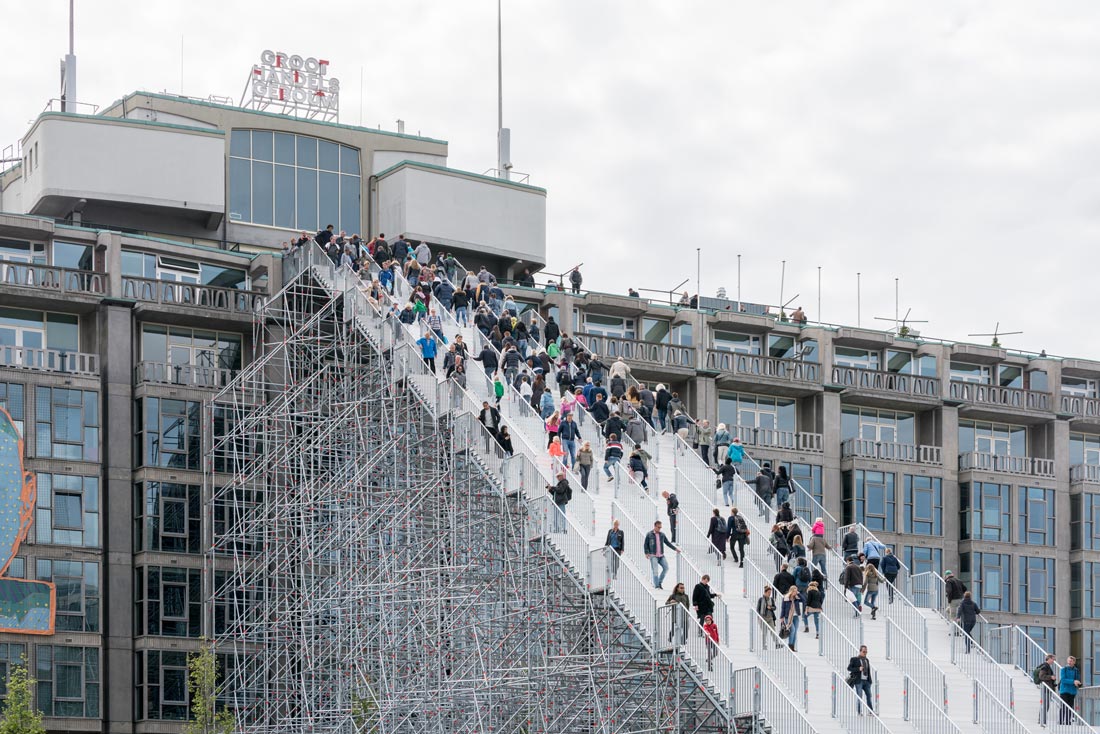 “The Stairs aim to animate the rooftop and to imagine a second layer in the next step of Rotterdam’s urban planning. A second reconstruction,” says Winy Maas. “It would be good to make it a permanent fixture.”

We were informed that, 10 years ago, West8 created a temporary stair made of scaffolding leading onto the rooftop of Las Palmas, a striking historic building in Rotterdam. There are similarities between the two stairs, so we want to credit Adriaan Geuze, West 8 and DaF for this wonderful idea. In our design process, we started with the dream of a permanent escalator, which then turned into a temporary project made of scaffolding. Dutch construction legislation then made the stair into the current design. Even though we did not copy the stair design by our colleagues, we still want to express our respect for the earlier project and its makers.

« Experiencing Scale: The Diminutive Dimensions of the Space
Built with Light »