Skolkovo is the Russian government’s initiative for a new urban community in Moscow’s third ring, 17 km west of the Kremlin. Built ex nihilo, the aim of Skolkovo is to create a globally reputed center for innovative 21st-century technology, embracing research and production, with administrative headquarters for both established and emerging companies, schools, institutes, and a new university: Skoltech University. A newly founded institution, it was built together with the rest of Skolkovo, and is intended to be a distinguished educational and research center for Moscow, Russia and the whole world. The original master plan for Skolkovo aims to create urban quality through a vibrant mix of civic activities – living, studying, working, travel, shopping, relaxing. 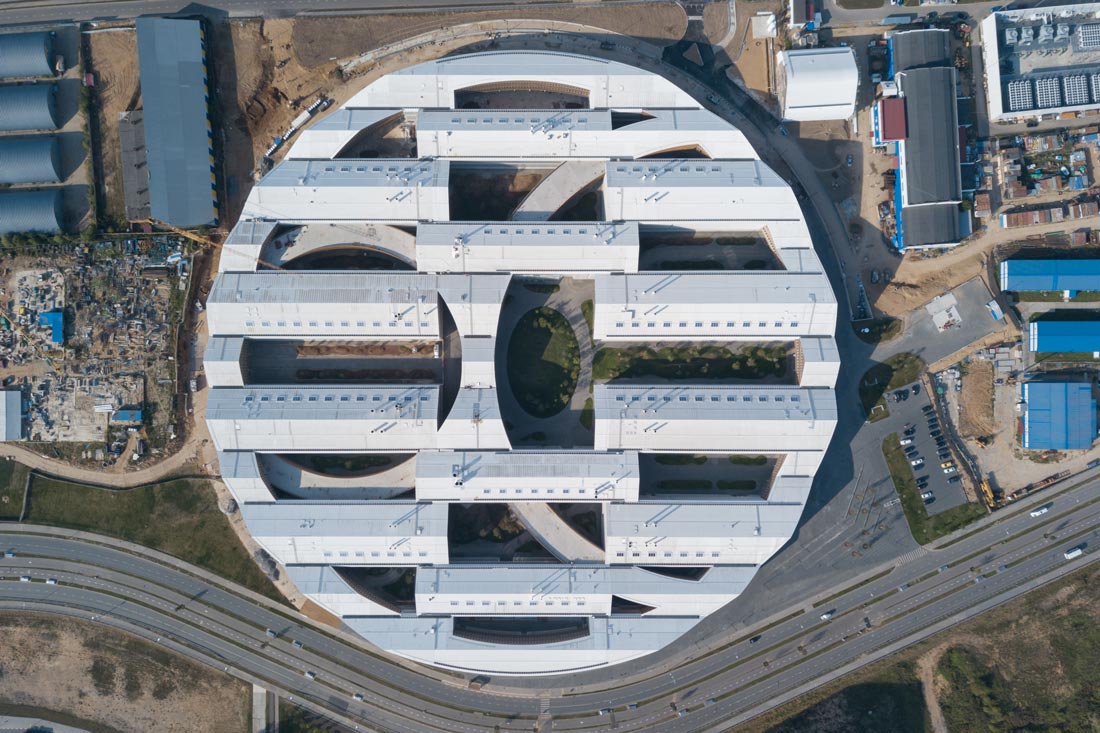 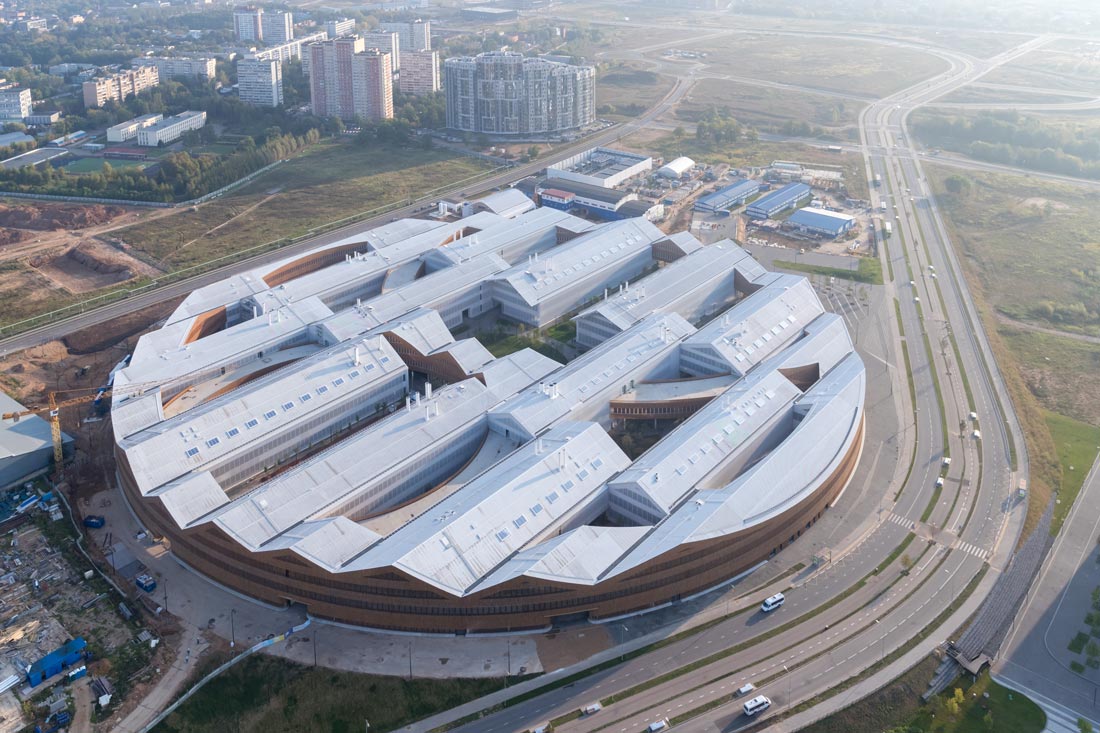 Unlike the Soviet-era closed satellite towns, Skolkovo forms a distinct epicenter within the radial grid of Moscow, integrated with its infrastructure, included in its cultural life, and visually connected with the State University tower. The urban scheme develops around the idea of five individual districts, like urban islands, inserted in the picturesque landscape. Each of the five districts has a singular shape, a specific program mix and is designed by a different architect, giving it a specific character and atmosphere. Herzog & de Meuron designed the conceptual master plan for District 3 with the University as its centerpiece. Comprised of three circular shapes and phases – the East Ring, the Agora and the West Ring – the emerging Skoltech University is envisioned as a nucleus, a distinctive core for the District, and a cornerstone of Skolkovo. 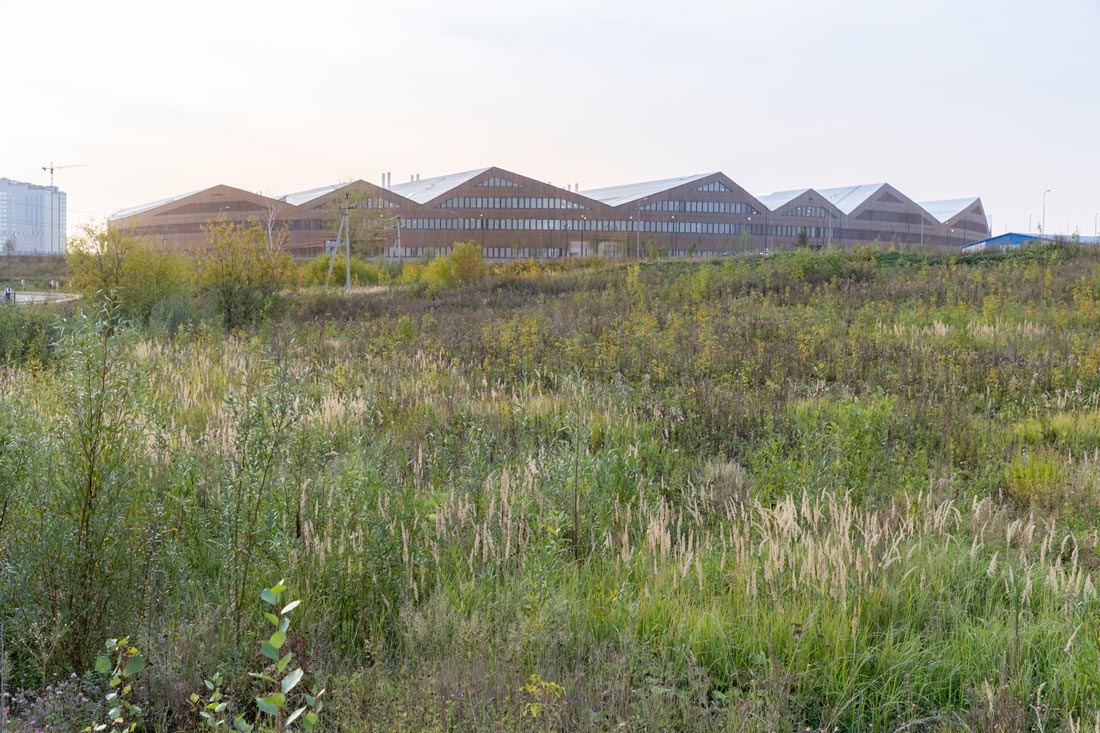 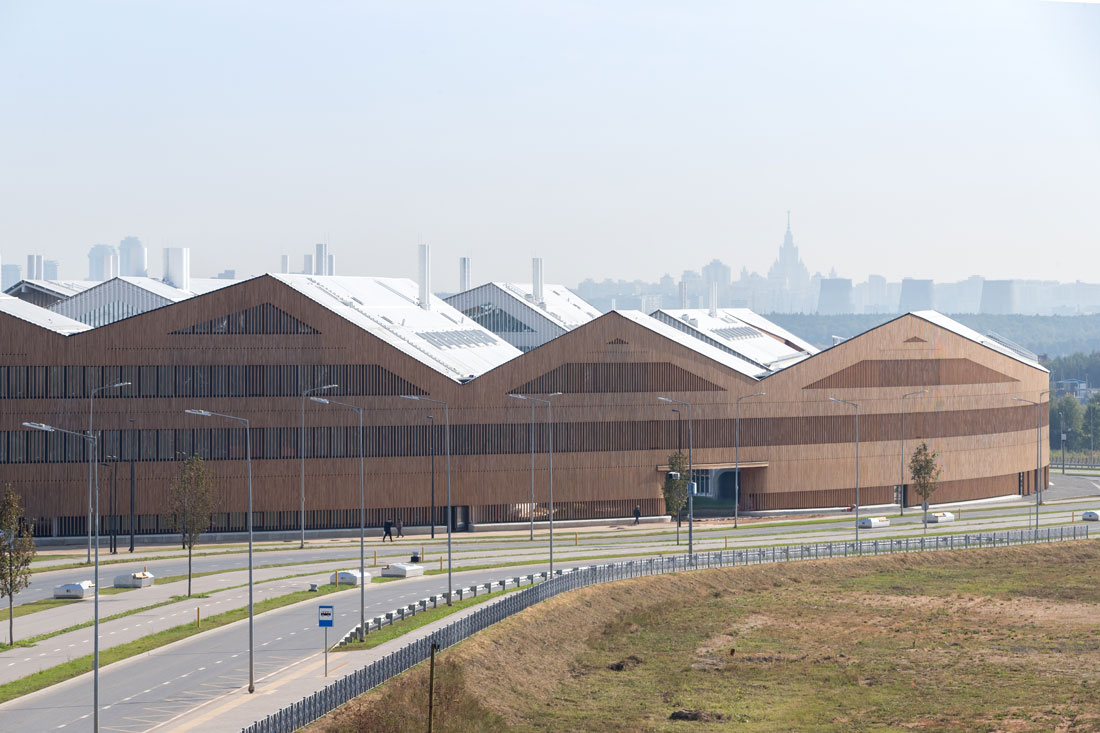 The University East Ring has a simple form and organization of interlocked circular rings and rectangular blocks, which directly reflect its programmatic content and diversity. An outer ring of 280 meters in diameter and two smaller inner rings host all the shared academic facilities and public spaces. The curved shapes connect all zones in a single loop. 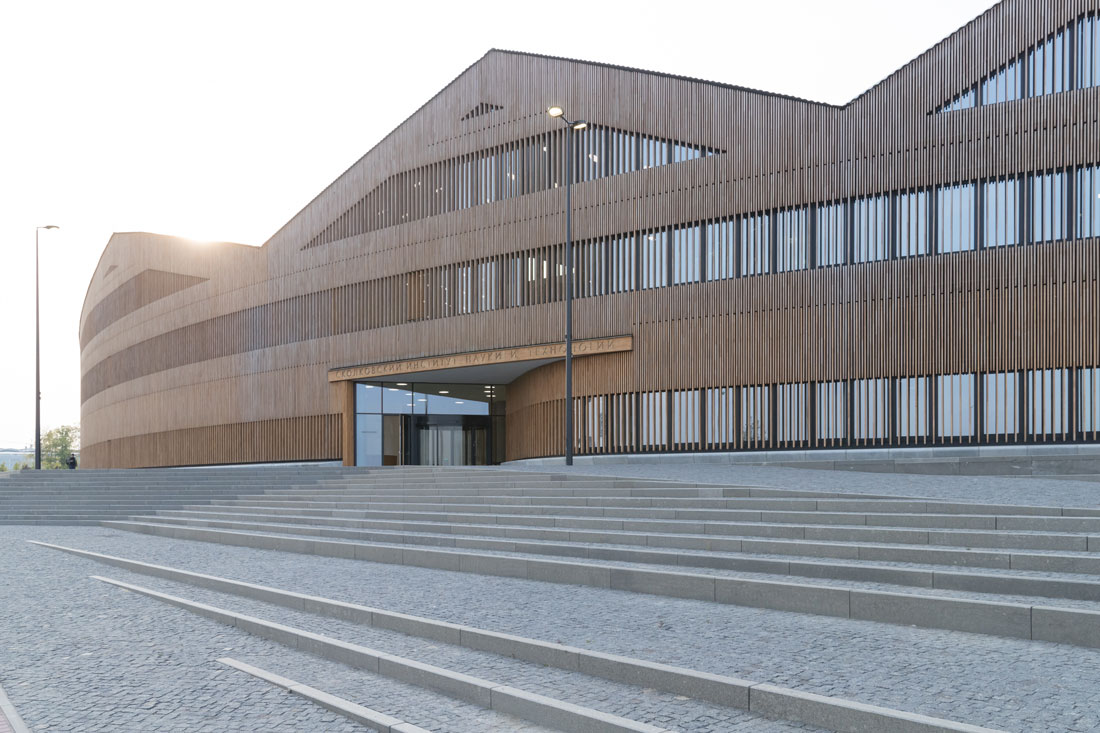 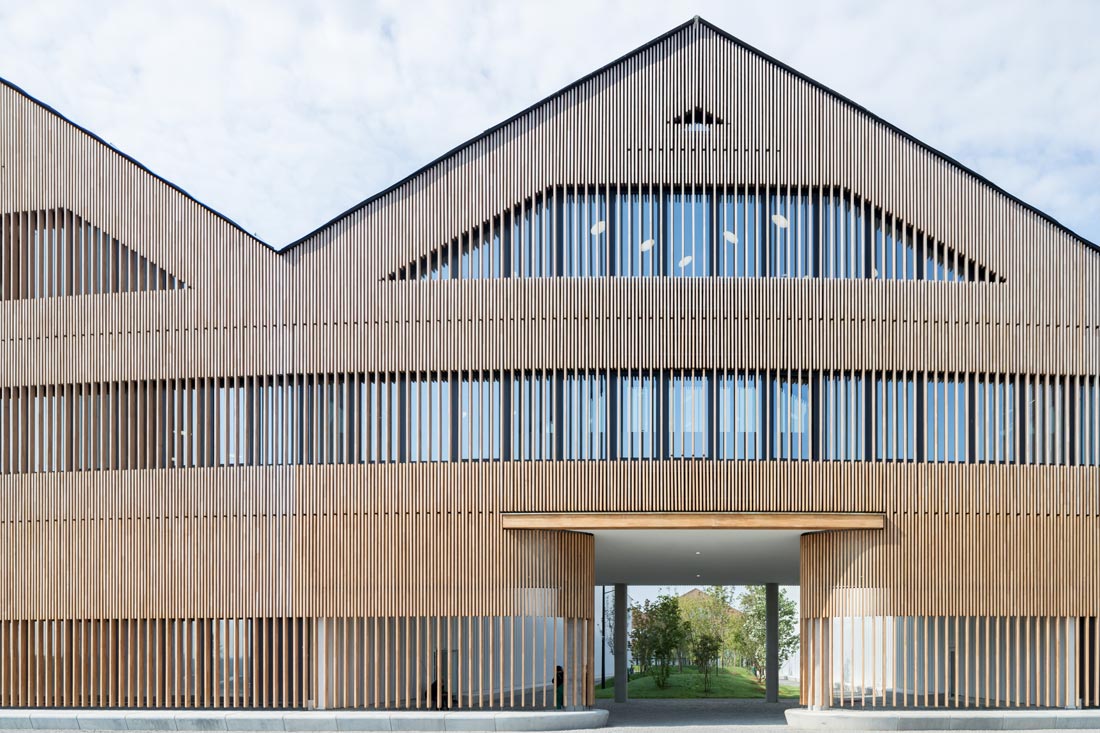 The outer ring accommodates the faculty offices, administration and meeting spaces, while the inner rings house the teaching and learning spaces, with the main auditorium at the central crossing point. A rational grid of rectangular and repetitive blocks is laid out in a checkerboard pattern to house laboratories and workshops related to the academic research activities. To optimize daylight, the blocks are oriented east-west. The lab blocks are based on a 7×7 meter planning and structural grid, and they have uniform widths of 21 or 28 meters, with varying lengths. These repetitive orthogonal shapes offer the efficiency and simplicity of rational modular layouts, combined with the flexibility and adaptability generally required for laboratory and workshop spaces. Additional research facilities, loading areas, and logistics and technical areas are located in the continuous basement floor beneath the entire building. The laboratories and workshops complete the University’s academic area, forming a platform for interconnected departments and shared facilities. The overlay and interaction between the blocks and rings create an interesting architectural quality. 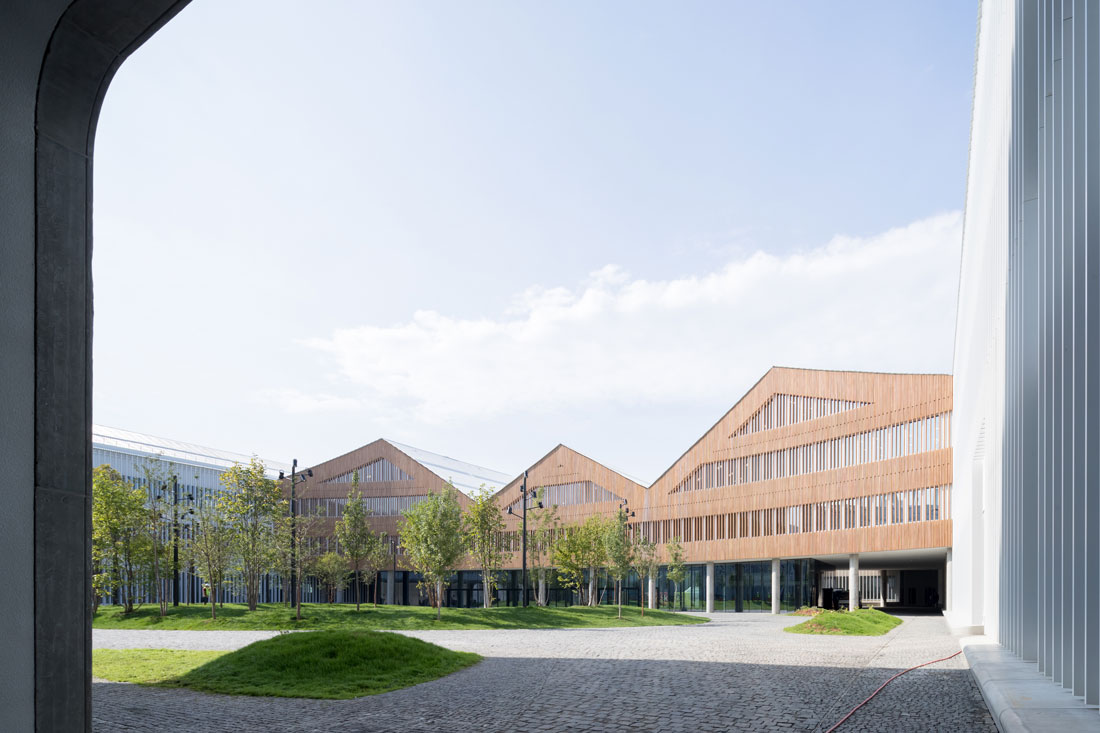 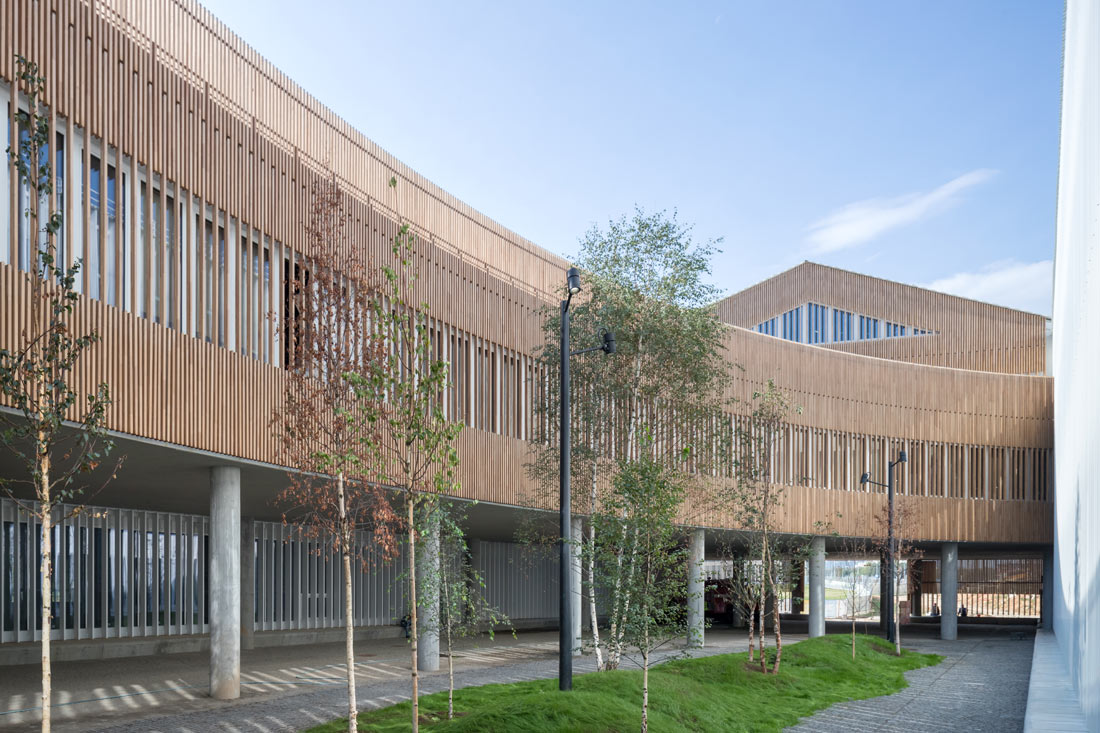 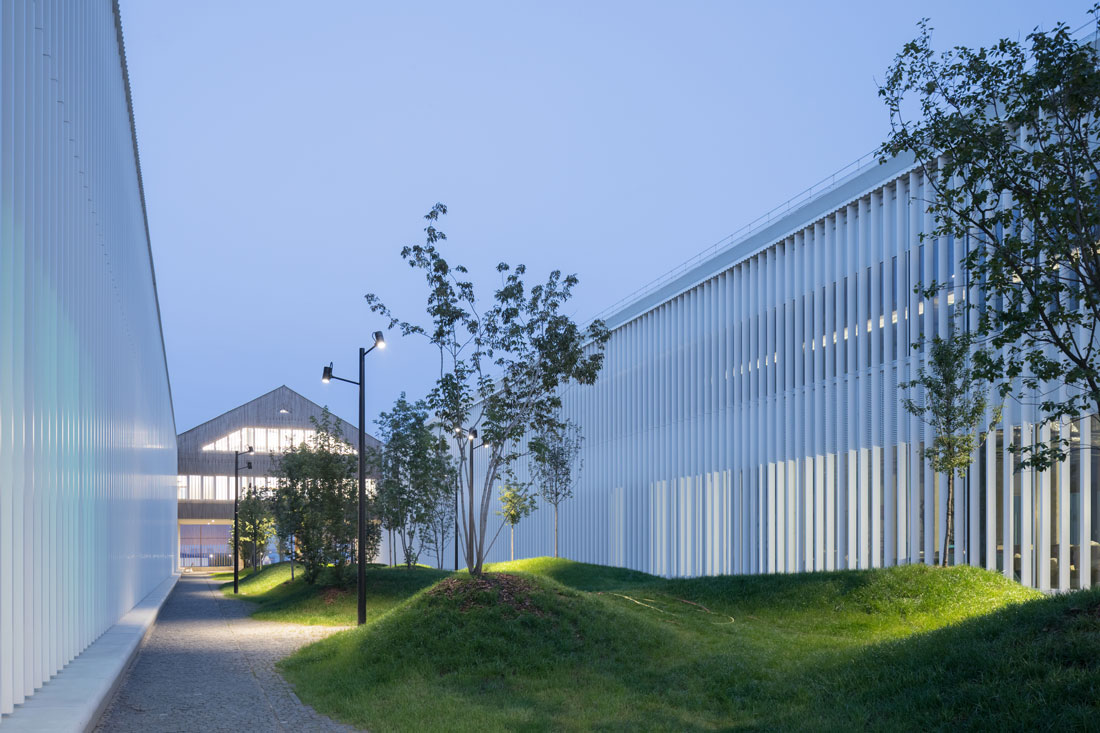 The three rings circumscribe and penetrate the blocks and connect the compound together into a distinctive sculptural form, which shapes the boulevard outside and creates a network of connected courtyards inside. Despite its monolithic appearance, the building is porous at street level, and all its courtyards are open and accessible to the public. The largest of the courtyards – the Central Yard – is visible from all the rings and most of the blocks, and it is a main destination for formal ceremonies and everyday relaxation. The courtyards have diverse sizes and are connected via similarly varied passages, which either pass under the rings or carve through the corners of the blocks, offering a multitude of paths through the University and accommodating all public entrances into the building. The uniform planting of the courtyards and around the East Ring will become an essential element of the experience of Skoltech as it matures, and it will integrate the University landscape with the natural forests around Moscow. 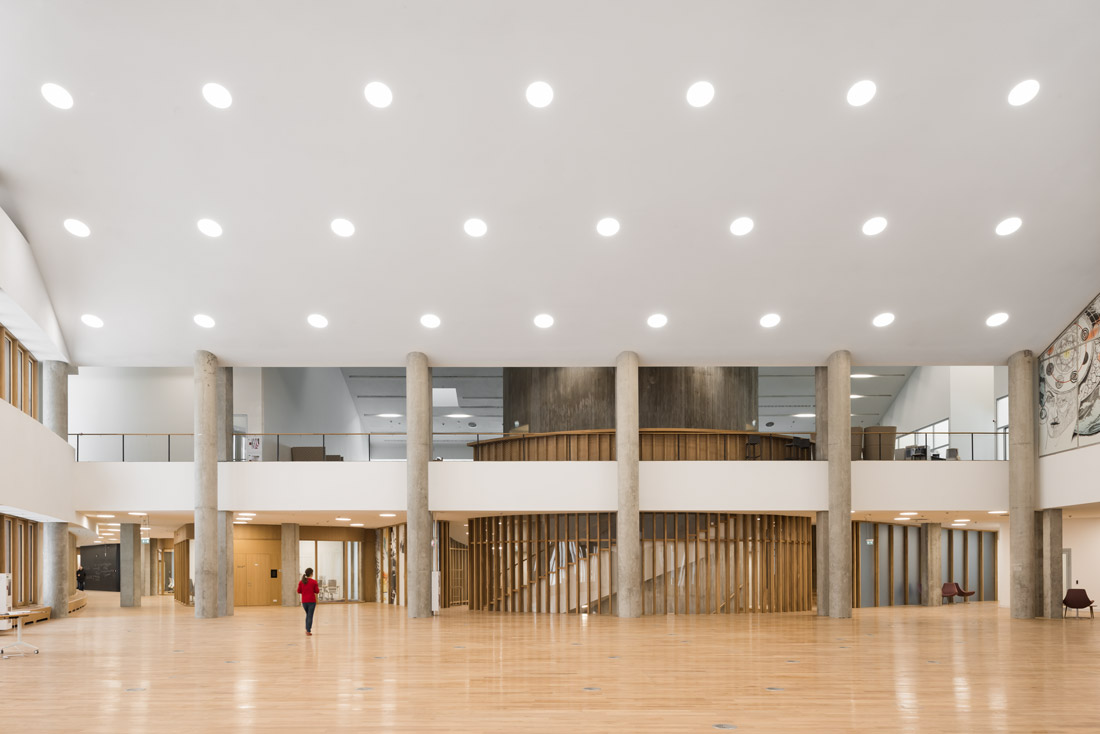 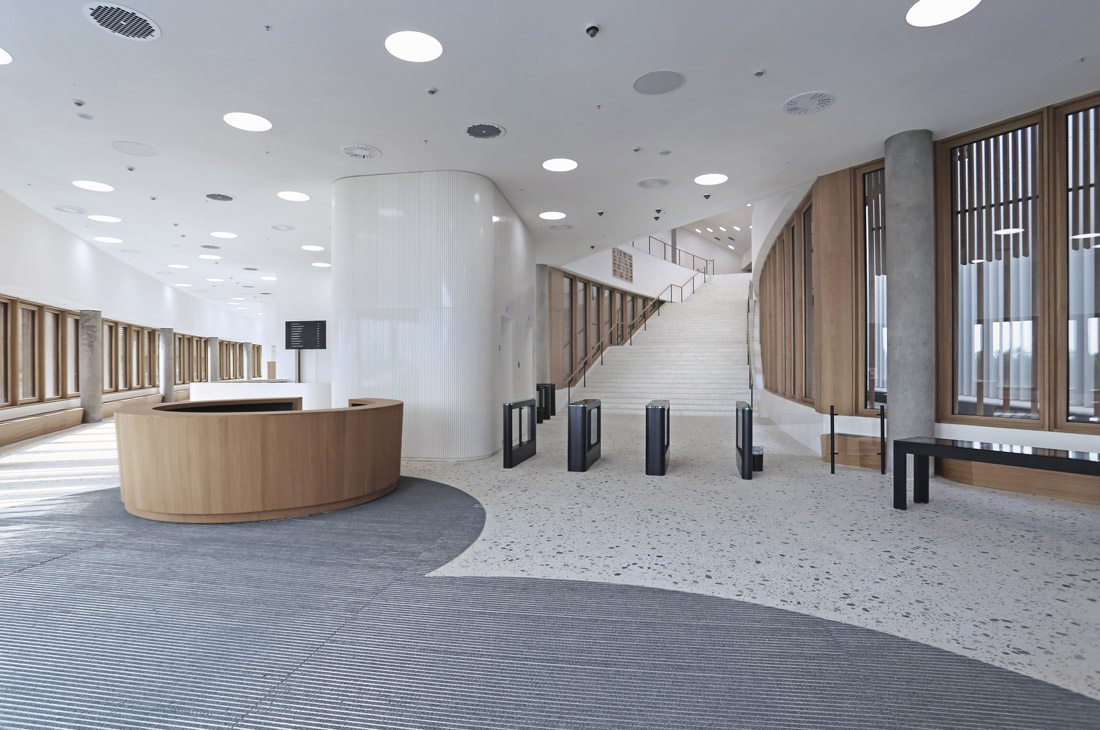 The University rings and blocks are clad with fins that control the daylight and unify the façades, giving them overall texture and depth. Finish materials distinguish the rings and blocks on the inside and outside. The rings have natural oak flooring and wall systems in the interior and Siberian larch fins on the exterior, while the blocks have industrial vinyl flooring and aluminum wall systems in the labs and white aluminum fins on the exterior. 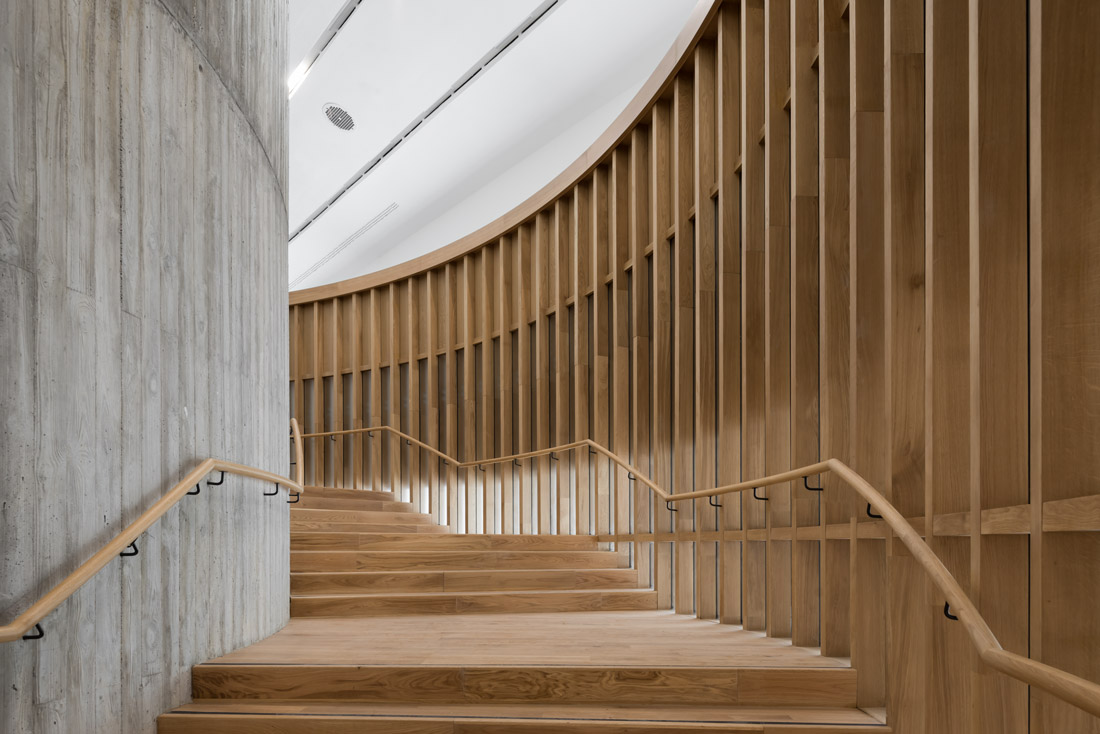 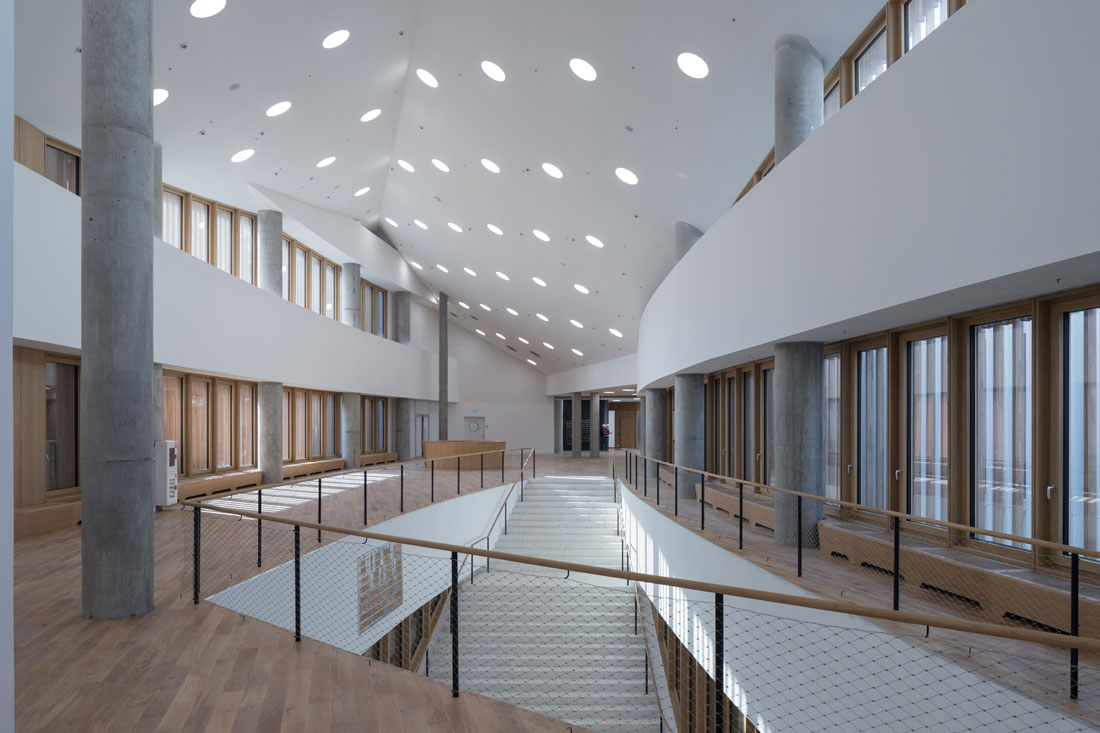 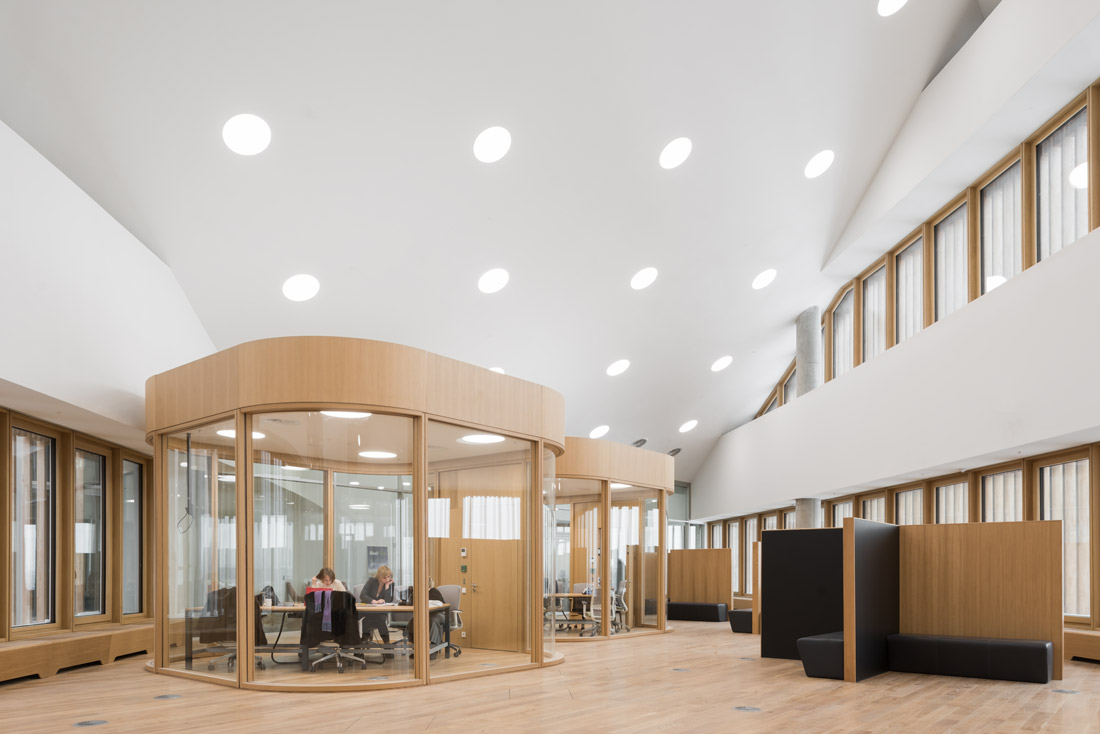 The building envelope is unified by a continuous concrete bench at the base and by connected sloping roofs at the top which, along with the overall façade, bring together all the elements into one integrated whole and set the University apart from the other buildings in the master plan. The scheme nonetheless remains fully integrated with its surroundings. Skoltech is integrated, permeable and monumental at the same time, by virtue of its low-rise architecture, numerous openings and views on the interior, its series of publicly accessible courtyards, and its traditional materials.