This article originally appeared on ArchDaily.

Satellite images of Earth at night make for fascinating, beautiful pictures. But they also confront us with a growing form of pollution. Why do we waste so much energy to light outer space when we only need light on the ground? High-resolution satellite data can now deliver detailed insights into how humans have shaped the night, and these earth observation systems are about to reform our urban planning. They can become an integral part of project development and control, as many strange ecological, political and social phenomena become apparent with a closer look at the night-time imagery of our planet. 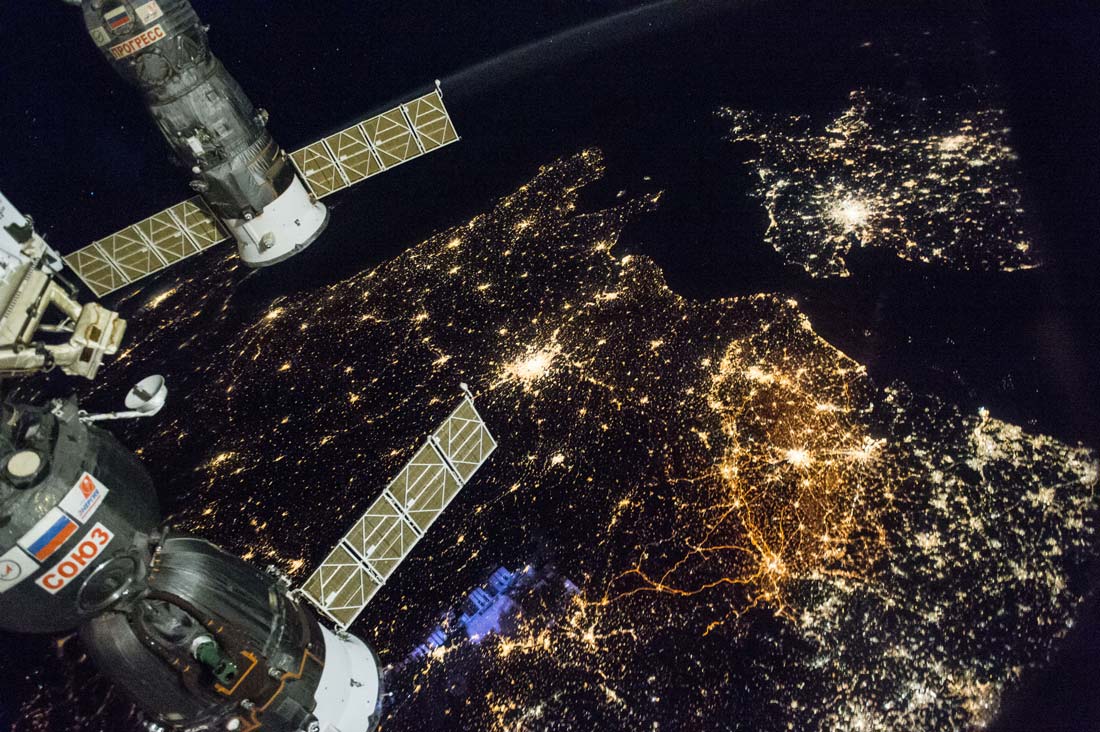 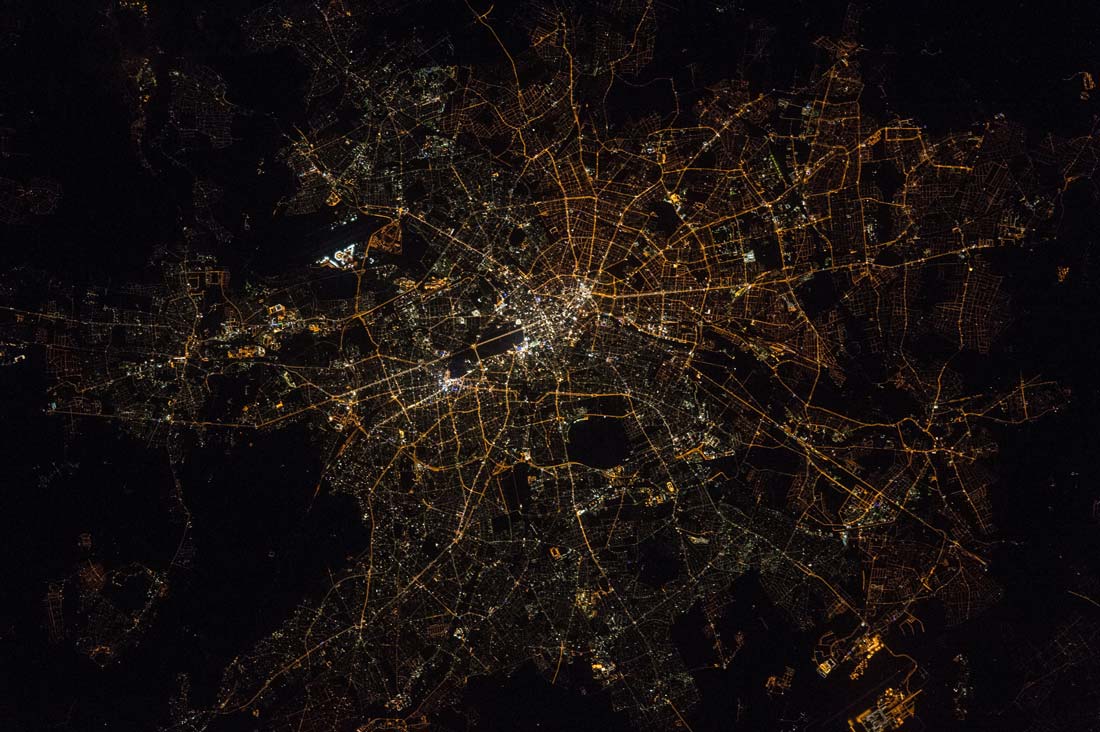 Low-flying scanners can generate higher quality resolutions compared to satellite images. However, they usually work infrequently. In contrast, satellites constantly produce updated information worldwide. They have laid the foundation to study light pollution over time. Accessing the data gets easier with the proliferation of public open online platforms like Google Earth, NASA Worldview or the Global Human Settlement Layer.

These detailed night-time images have turned into an interesting indicator for growing urbanization and ecology. Cities appear as glowing centers on our planet. At the same time, the luminosity on the ground reduces the ability to watch the stars in the sky. Bright lines signify coastlines or transport routes like the Trans-Siberian Railway line from Moscow to Vladivostok. Also, gas being burned off wastefully in the US or at oil platforms in the North Sea or around the Persian Gulf region can be clearly spotted in satellite images. But has modern LED technology effectively helped to reduce light emission? 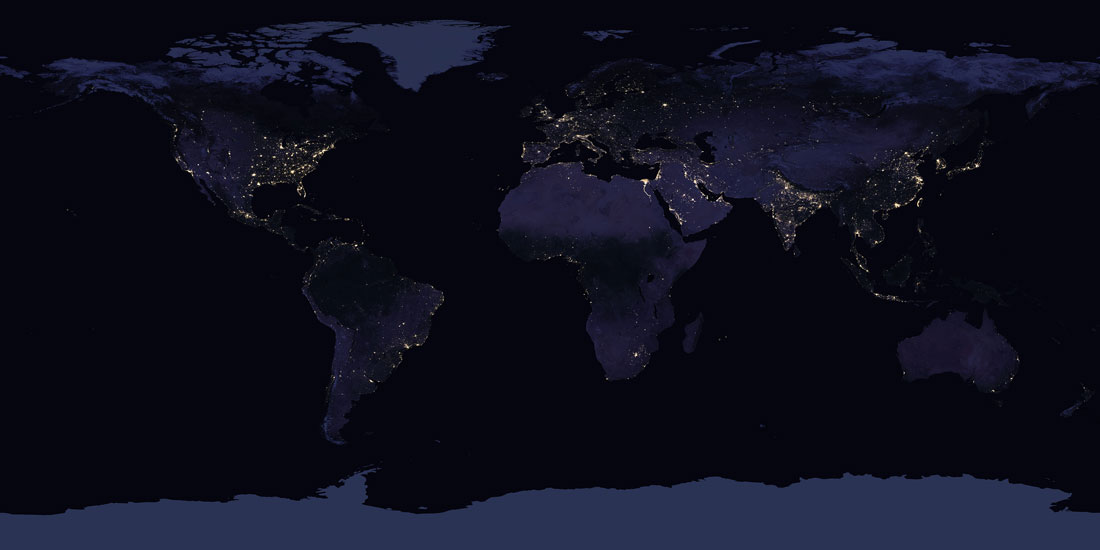 The recent change from conventional lighting to LED has quickly spread worldwide. Cities expected huge energy savings. Unfortunately, the satellite images show that we have more light pollution than before. A recent study in Scientific Advances reveals a “rebound” effect, because clients dared to specify more light based on the associated energy savings. Some cities have saved energy by switching to LEDs, but on a global scale the hypothesis that LED transition would reduce light pollution cannot be shown to be true. From 2012 to 2015, almost 60 countries increased their levels of illumination at night between 110 to 150 percent. For an effective reduction of light pollution designers and engineers have to think beyond the luminous efficacy of LEDs and need to recover the sky with precise and suitable optics, luminaire arrangements and controls. In addition, we need to rethink our motivation for lighting at night. 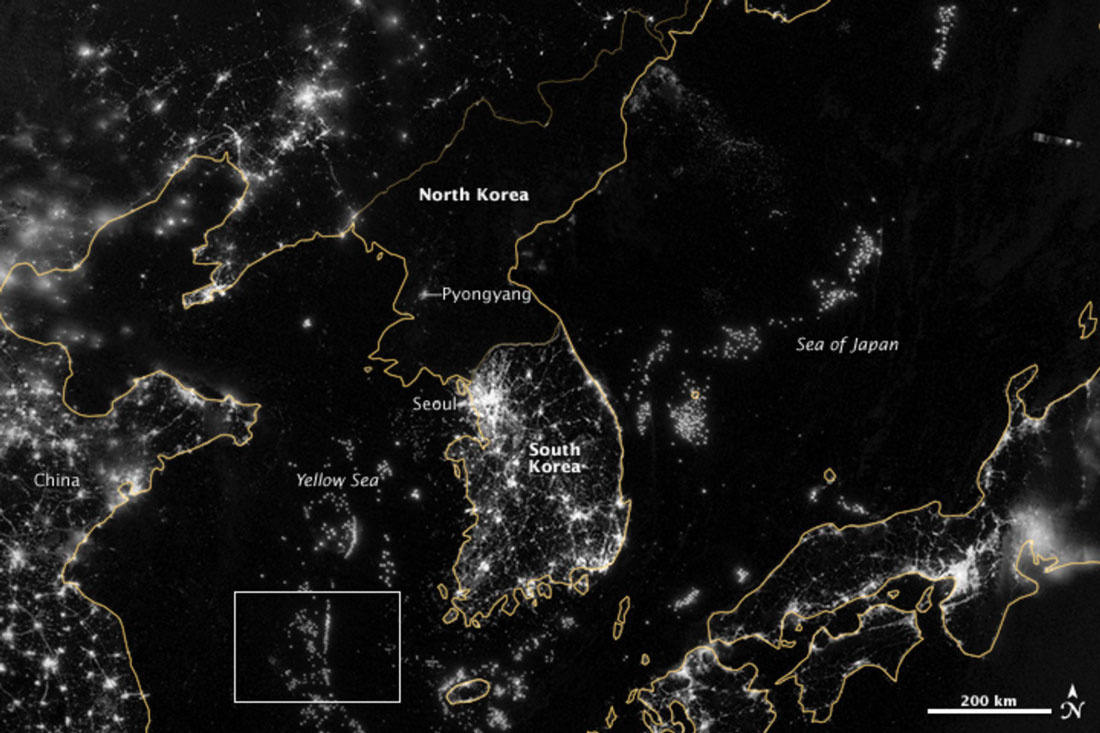 Night lighting does not always relate to prosperity, reduced crime and safety

Looking at nocturnal illumination in South Korea in comparison to North Korea might lead us to the conclusion that outdoor lighting is related to prosperity. But if we shift our view to Germany and Belgium, we encounter a similar level of prosperity between the two countries but a significant difference in night-time lighting. One reason for this is that Germany rarely lights its highways and urban areas are lit conservatively, as light pollution expert Christopher Kyba remarks. In addition, Belgian roads symbolize a profitable but also questionable relationship between politicians, electrical distributors and energy suppliers, notes the New York Times. 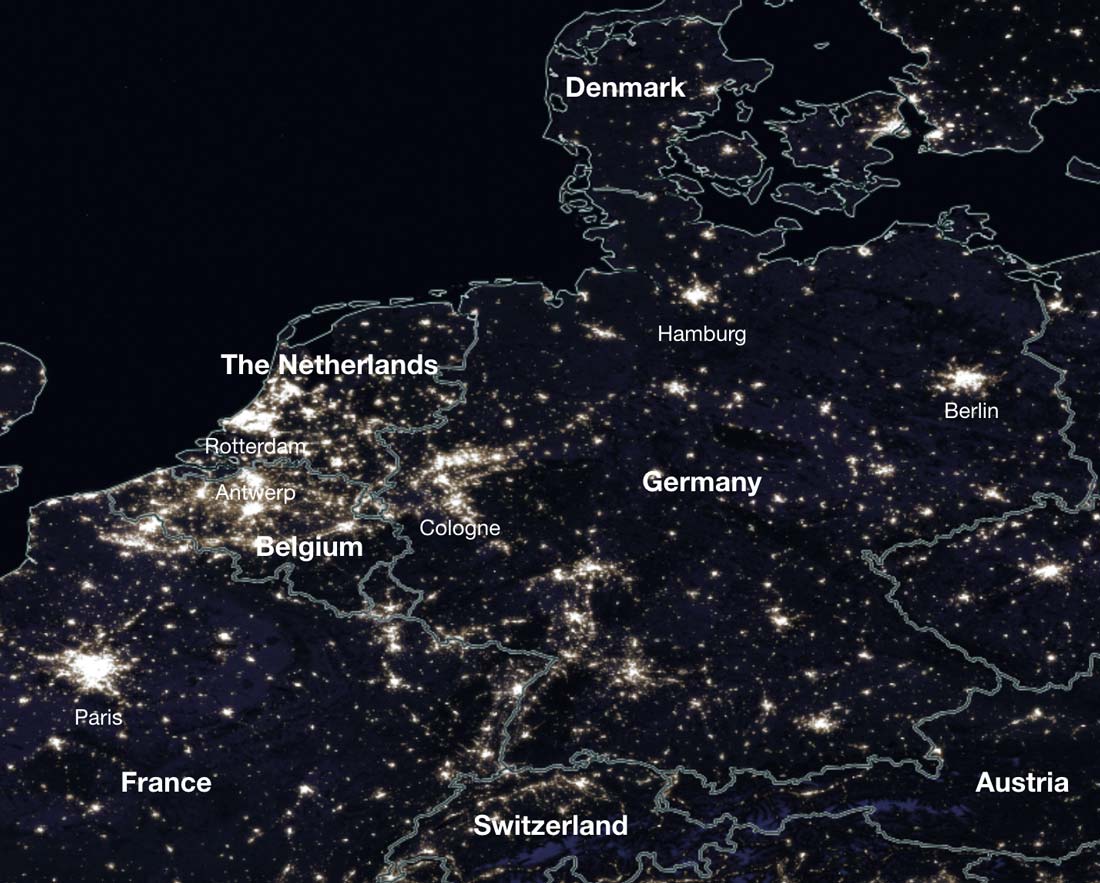 When Kyba compared the USA and Germany, he discovered that American cities have more than five times more light per capita. Nevertheless, Germany has a low crime rate – with a burglary rate only 1/3 of the rate in the brightly-lit Netherlands and just over ½ of that in Belgium, observed Kyba. When it comes to traffic, Germany has 1/3 fewer deaths due to traffic than the USA or Belgium. For Kyba these facts demonstrate clearly that bright illumination does not ensure crime reduction and safer driving, but rather wastes energy and causes light pollution.

The universe knows when we celebrate

No matter whether we look at Christian or Muslim traditions, light emission rises considerably for major holiday seasons, according to NASA. Night lighting shines 20 to 50 percent brighter during Christmas and New Year’s around many major US metropolitan areas when compared to the rest of the year. During Ramadan, nighttime lights increases more than 50 percent in some Middle Eastern cities compared to the rest of the year. This effect demonstrates vividly that the consumption of light is not only influenced by individual factors like price but also by the belief of cultural or religious groups. 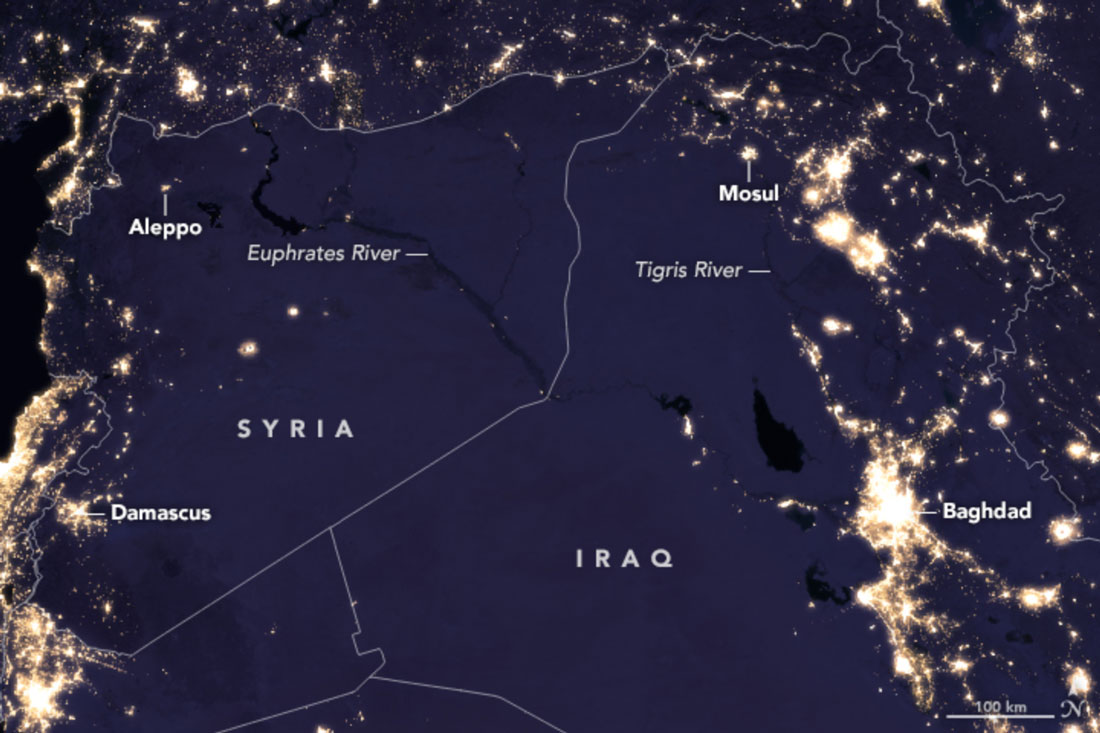 In some regions, we are able to detect severe reductions in lighting at night. However, often these changes are not linked to smart lighting design, but rather derive from cruel warfare. The differences in nighttime lighting in Syria and Iraq between 2012 and 2016 shed light on the devastating consequences of conflict, especially around Aleppo. As much as 80 percent of the lights have gone out in Syria over the past few years, remarks a 2015 report from the Voice of America. 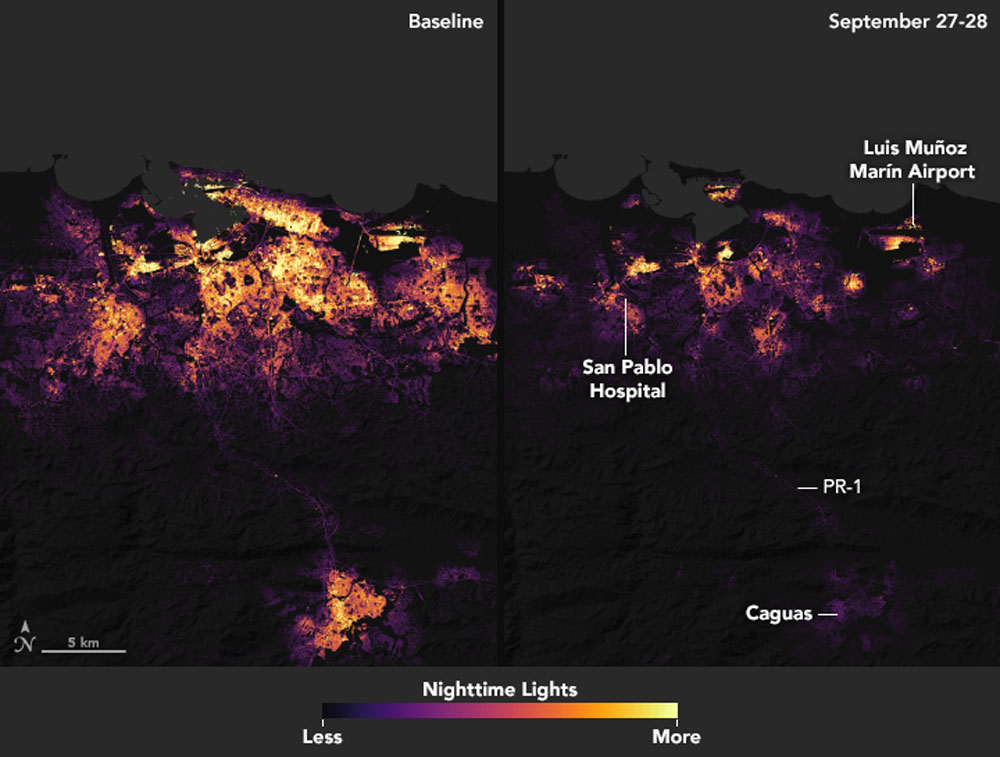 Knowing where rescue is most urgent

After disasters like earthquakes or hurricanes, rescue crews are faced with the challenge of quickly surveying large areas with impassable roads. But when infrastructure like the electric power grid and telecommunication networks are highly damaged, scientists can contribute useful data with satellite night-time images. In the case of Hurricane Maria in Puerto Rico in 2017, researchers took advantage of before-and-after images and combined them with high-resolution data from OpenStreetMap to show streets precisely. A careful image composition process is essential in these situations in order to avoid misleading conclusions because of errors like cloud cover and changing moonlight conditions. 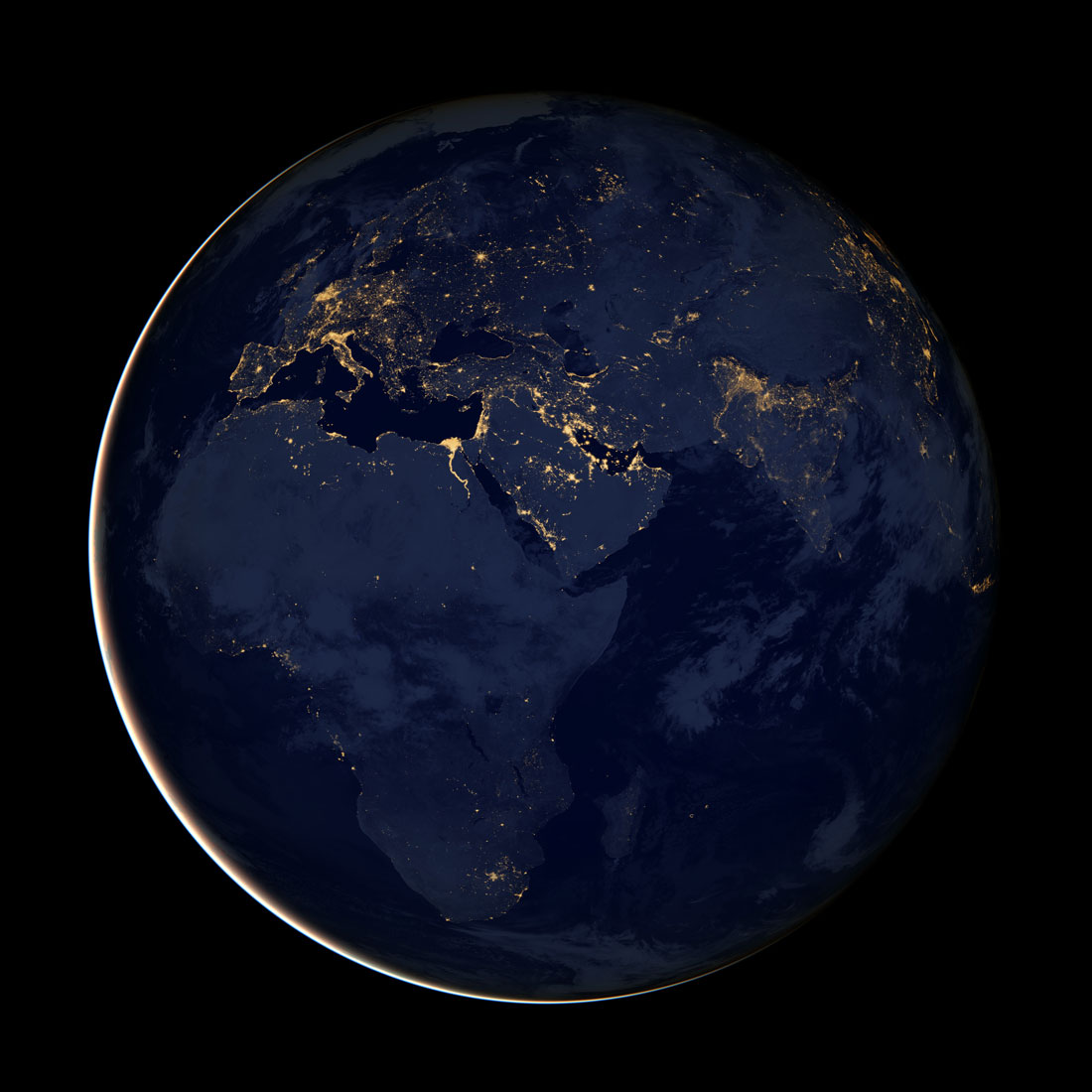 Resorts to enjoy the night

Where are the places that offer a clear view of the milky way? Greenland and the jungles of Africa and South America are the few natural areas where electric illumination does not yet dominate. Astronomers have shown a professional interest in locations with low light pollution for many years in order to find suitable spots to analyze the stars and to identify locations for future observatories. But this interest has expanded outside the boundaries of scientific communities. Cities and national parks have sensed that a dark sky is an important quality for recreation and tourism. As a consequence, Dark Sky Parks have emerged, internationally mirroring the pursuit of political initiatives for sustainability. 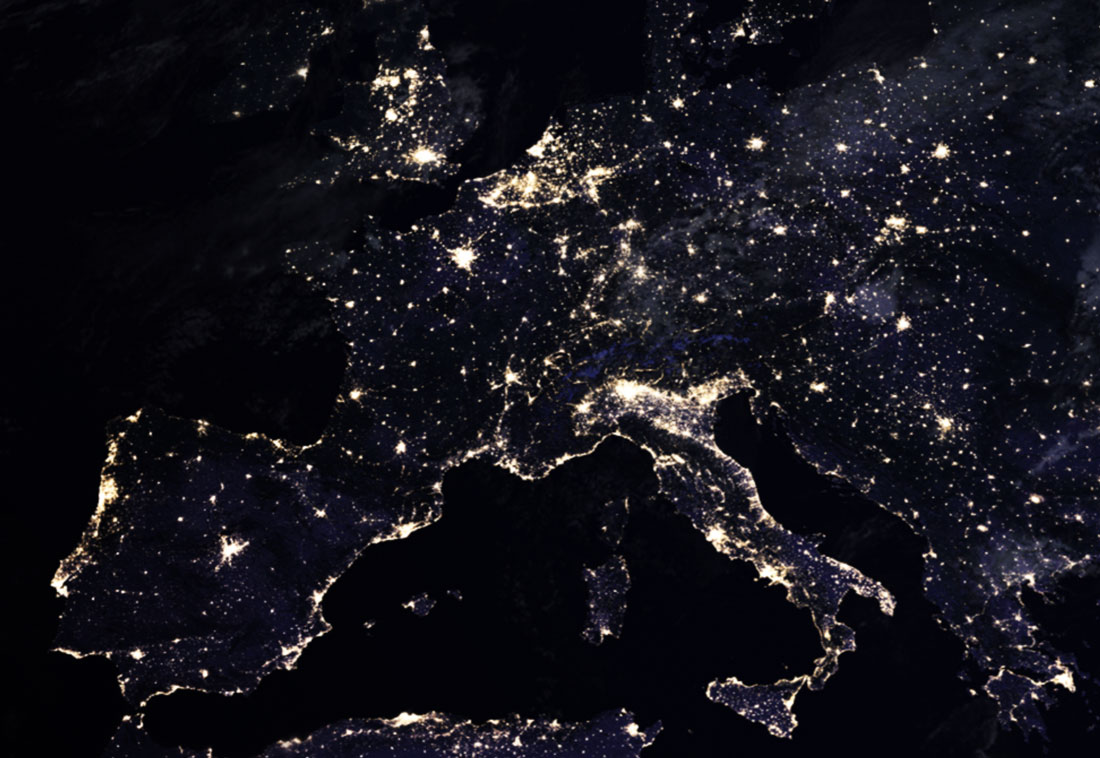 When satellites shape our cities and landscapes

Impressive nighttime images have already raised awareness of light pollution internationally. Hence, several regions have imposed lighting regulations to reduce energy waste. The Italian Lombardy region bill requires cutoff lighting distributions to avoid spilling light to the sky. The Czech Republic even published a national edict. However, newer satellite images have revealed that these measures were not applied successfully. The light levels actually increased over time, even though the legislative framework leads in the right direction. In contrast, in other regions legislative programs turned to be very effective when applied correctly, remarks Kyba: “Cities like Tucson, Arizona, show that well designed LED lamps allow a two-third or more decrease of light emission without any noticeable effect for human perception.”

The future of remote sensing technology will soon bring an even higher precision to night time observations, in shorter cycles for real time applications. As a consequence, satellite images of the night will shortly be considered more frequently to design a better nocturnal environment. Daily updates will turn into detailed feedback to evaluate changes in outdoor lighting instantly. Combinations with other maps will open new options for design, research and visualization-based data journalism. While we have numerous regulatory frameworks for air or water pollution on a national level, the pollution of lighting still awaits equal consideration. The public access to nighttime imagery will also help dark sky advocates to point out insufficient lighting activities. But today, we can already start with education and awareness campaigns to reverse the increase of light pollution and to use the benefits of LED lighting in a smart and sustainable way. 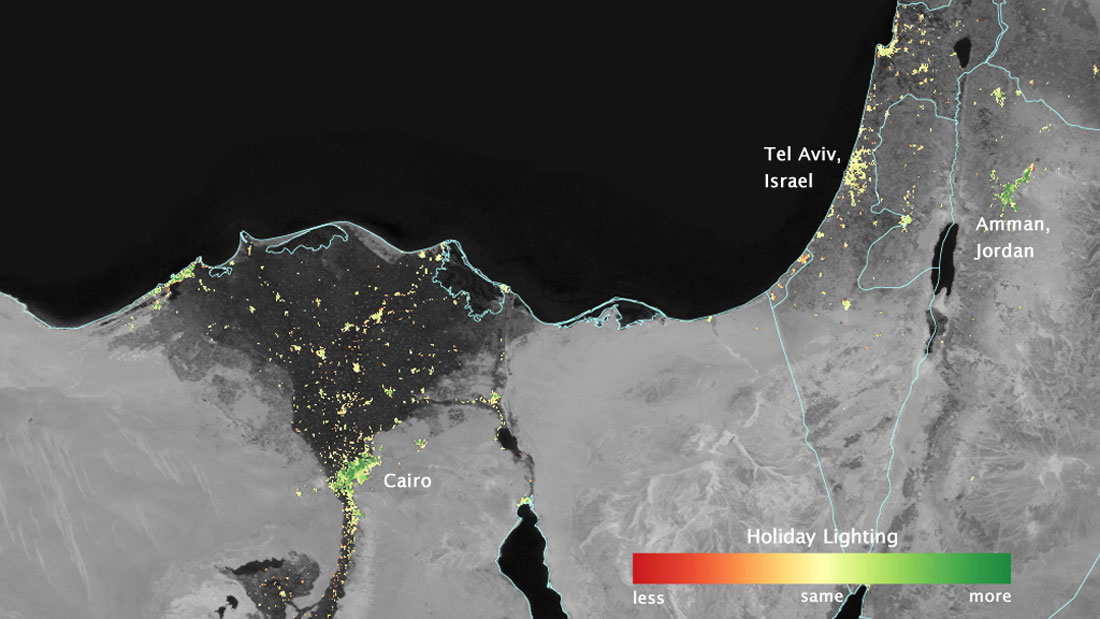 In several cities in the Middle East, city lights brighten during the Muslim holy month of Ramadan, as seen using a new analysis of daily data from the NASA-NOAA Suomi NPP satellite. Dark green pixels are areas where the lights are 50 percent brighter, or more, during Ramadan. Credits: NASA’s Earth Observatory/Jesse Allen 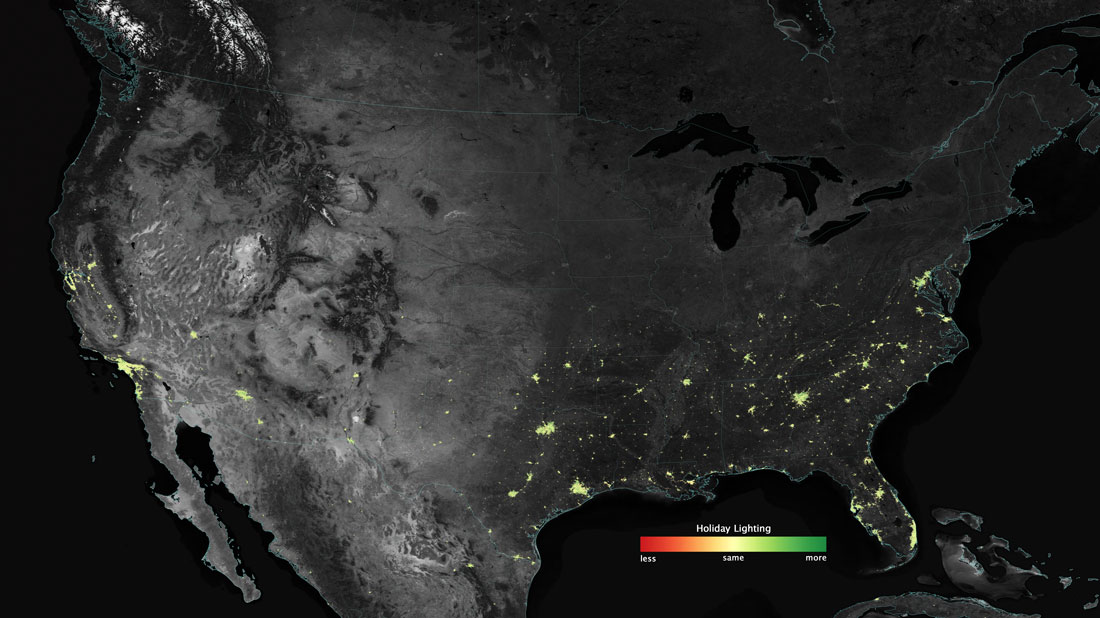 City lights shine brighter during the holidays in the United States when compared with the rest of the year, as shown using a new analysis of daily data from the NASA-NOAA Suomi NPP satellite. Dark green pixels are areas where lights are 50 percent brighter, or more, during December. Credits: NASA’s Earth Observatory/Jesse Allen 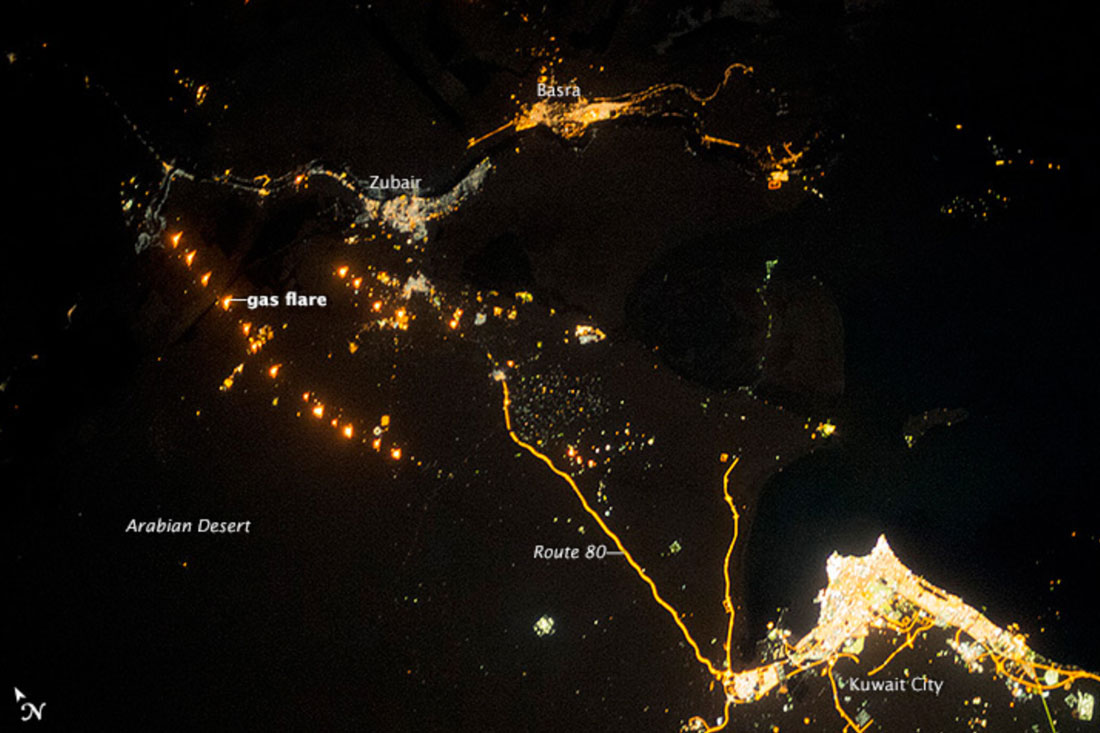 Dr. Thomas Schielke is based in Germany, he is fascinated by architectural lighting and works as an editor for the lighting company ERCO. He has published numerous articles and co-authored the books “Light Perspectives” and “SuperLux”. For more information check www.erco.com,  www.arclighting.de or follow him @arcspaces.