Rotterdam has 18.5 km2 of – mostly empty – flat roofs. Why has the city only made use of a limited number of roofs, when there is so much potential in doing so? To address this topic, the City of Rotterdam commissioned MVRDV and Rotterdam Rooftop Days to produce a catalogue of 130 innovative ideas to make use of the city’s roofs, giving rise to a fantastic new phase of development in Rotterdam. 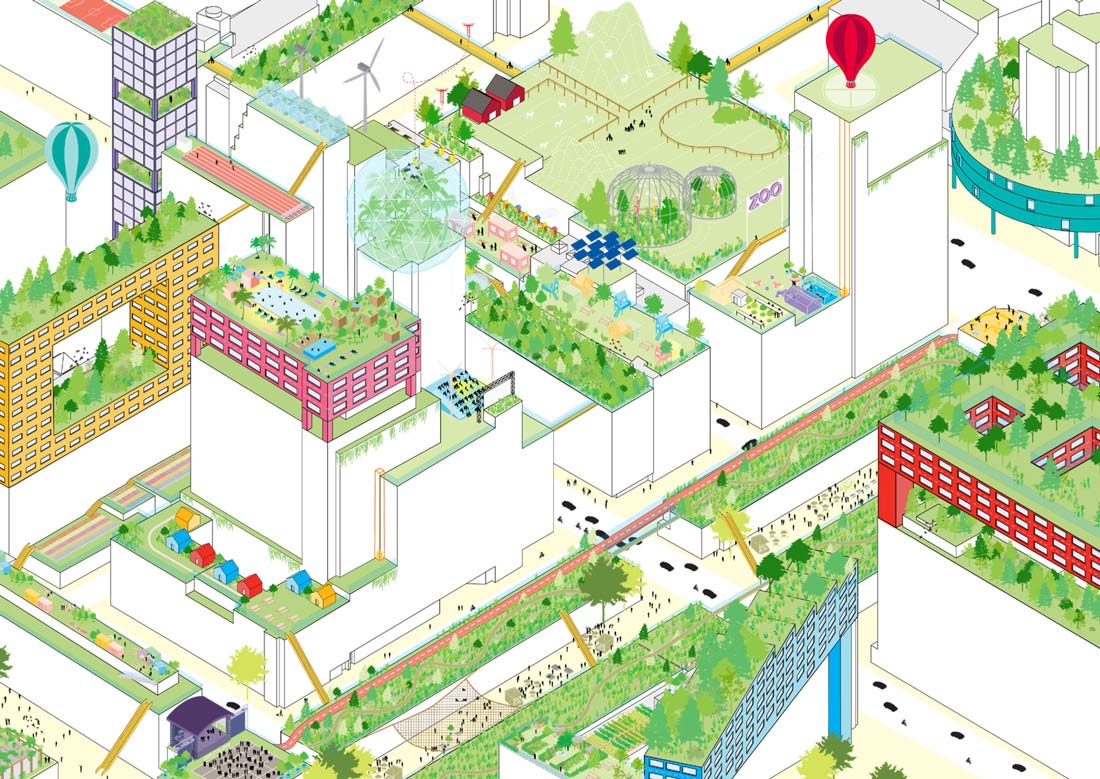 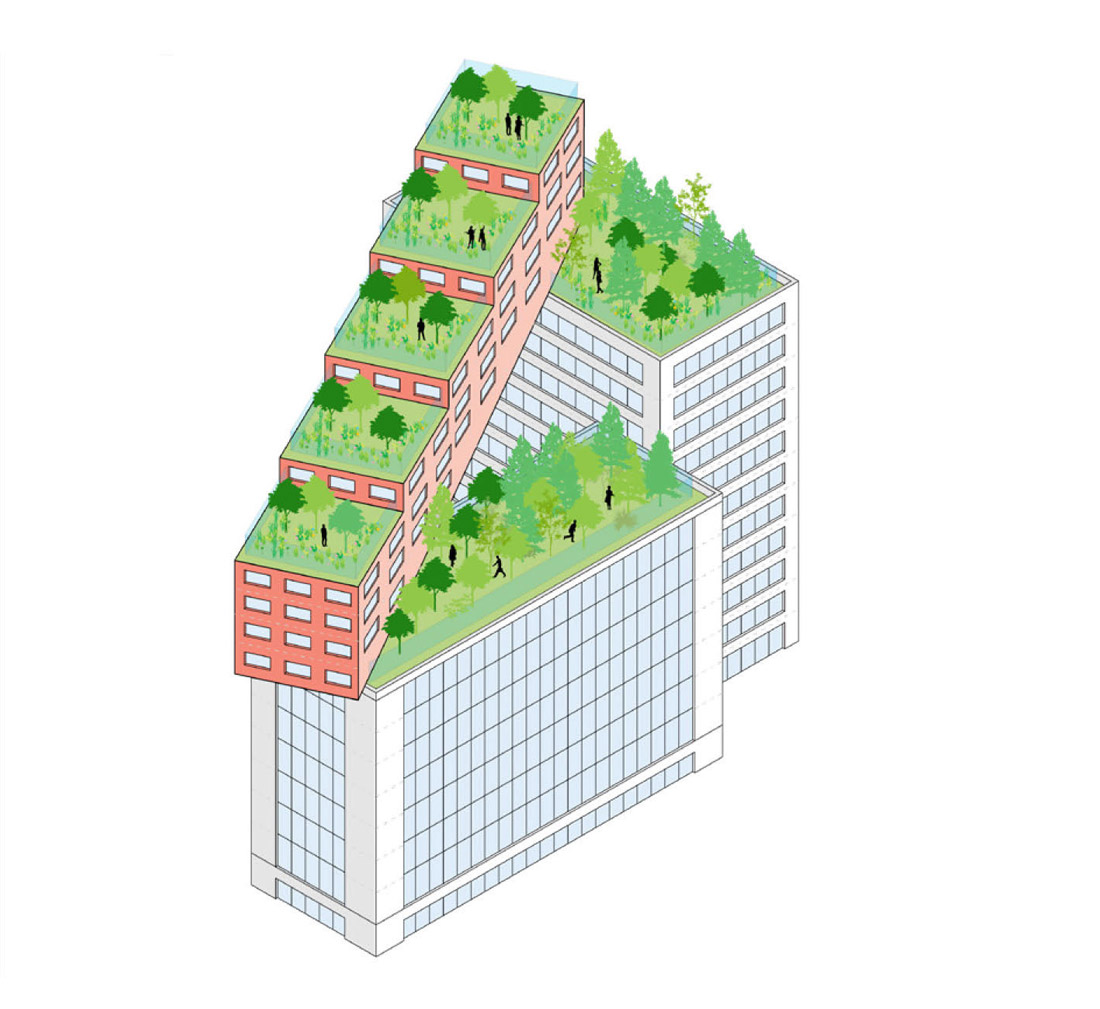 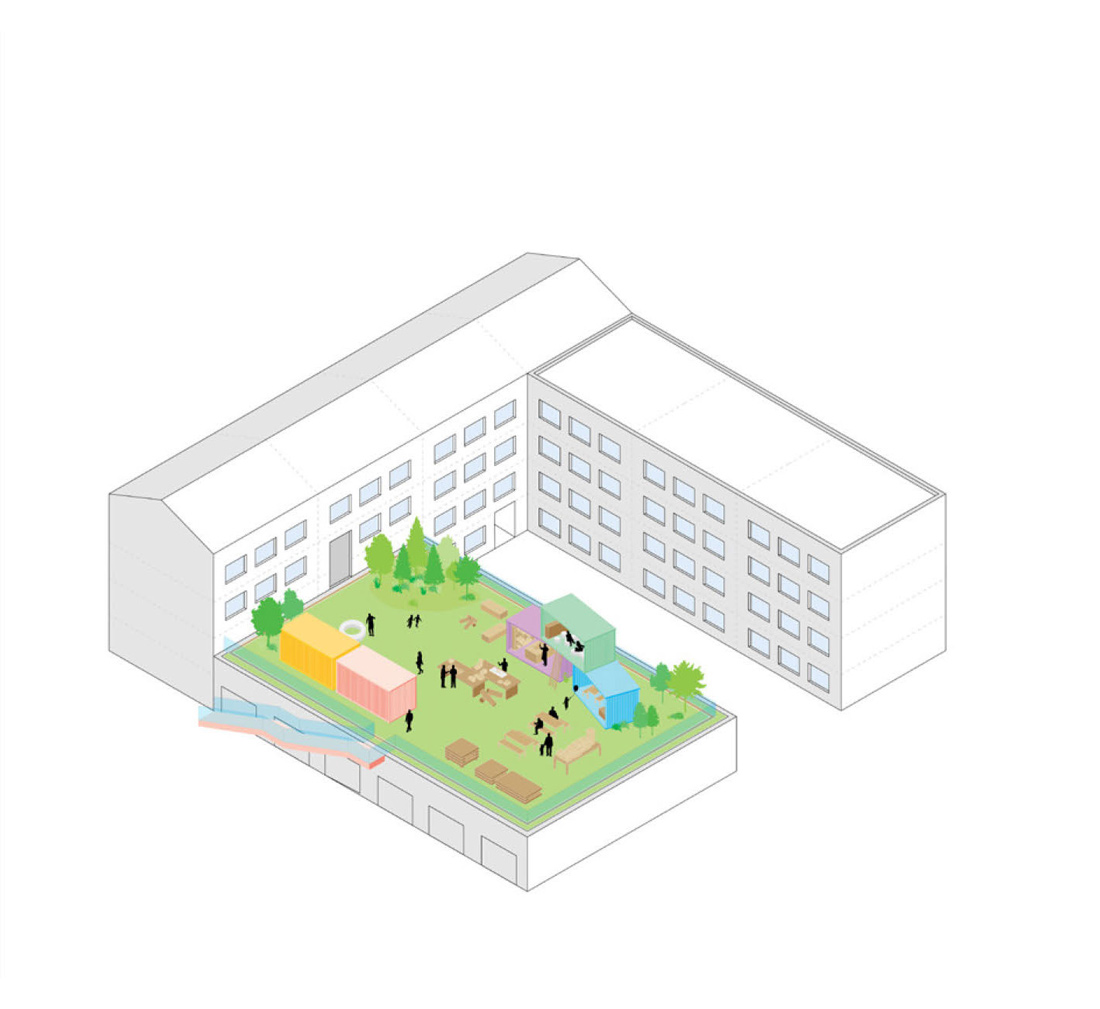 Rotterdammers are increasingly becoming used to seeing green roofs and even rooftop forests, thanks to the completion of MVRDV’s Depot Boijmans Van Beuningen. Yet flat roofs can be used for much more, for example storing water or as an event space. The Rooftop Catalogue offers an inspiring overview of no less than 130 different possibilities, from personal offices to sports fields to a cemetery. 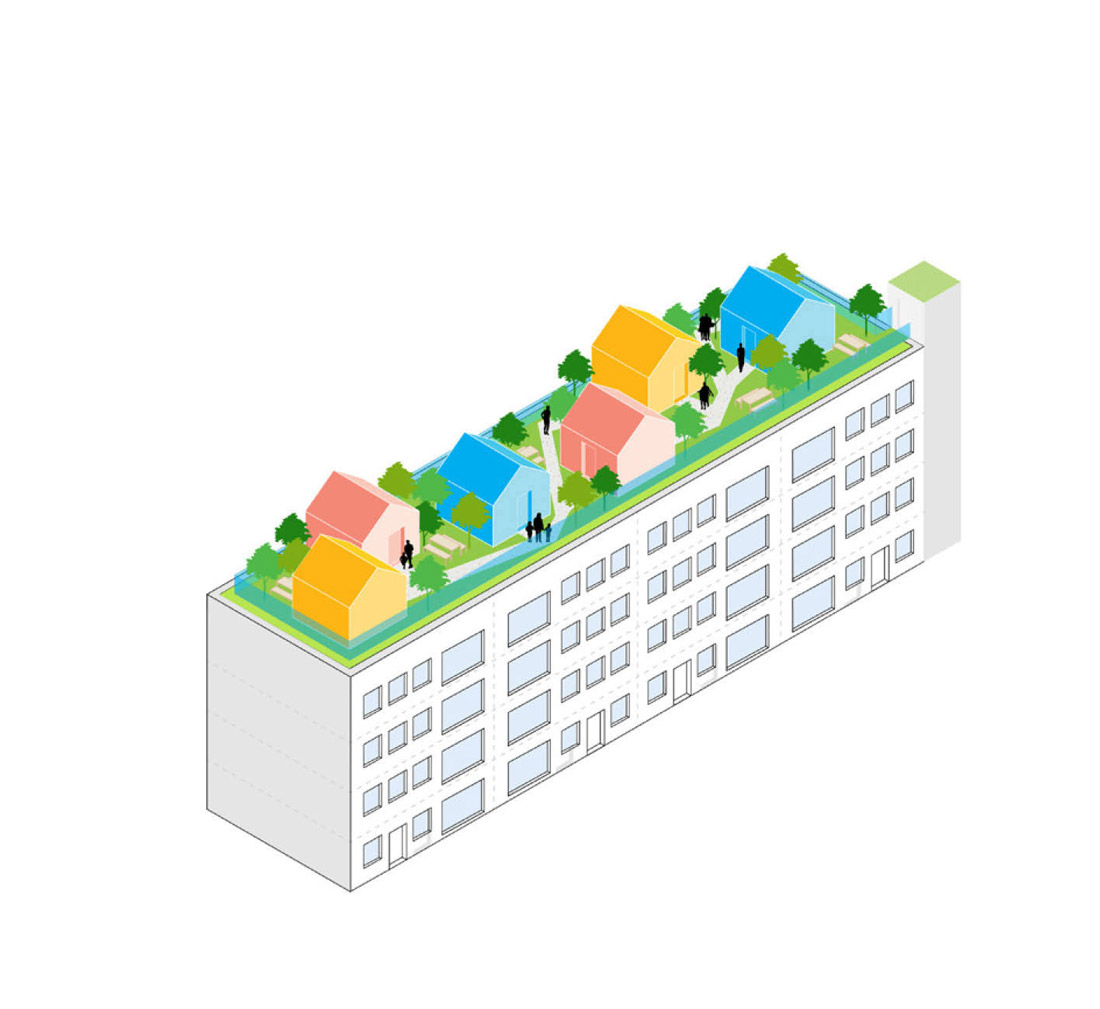 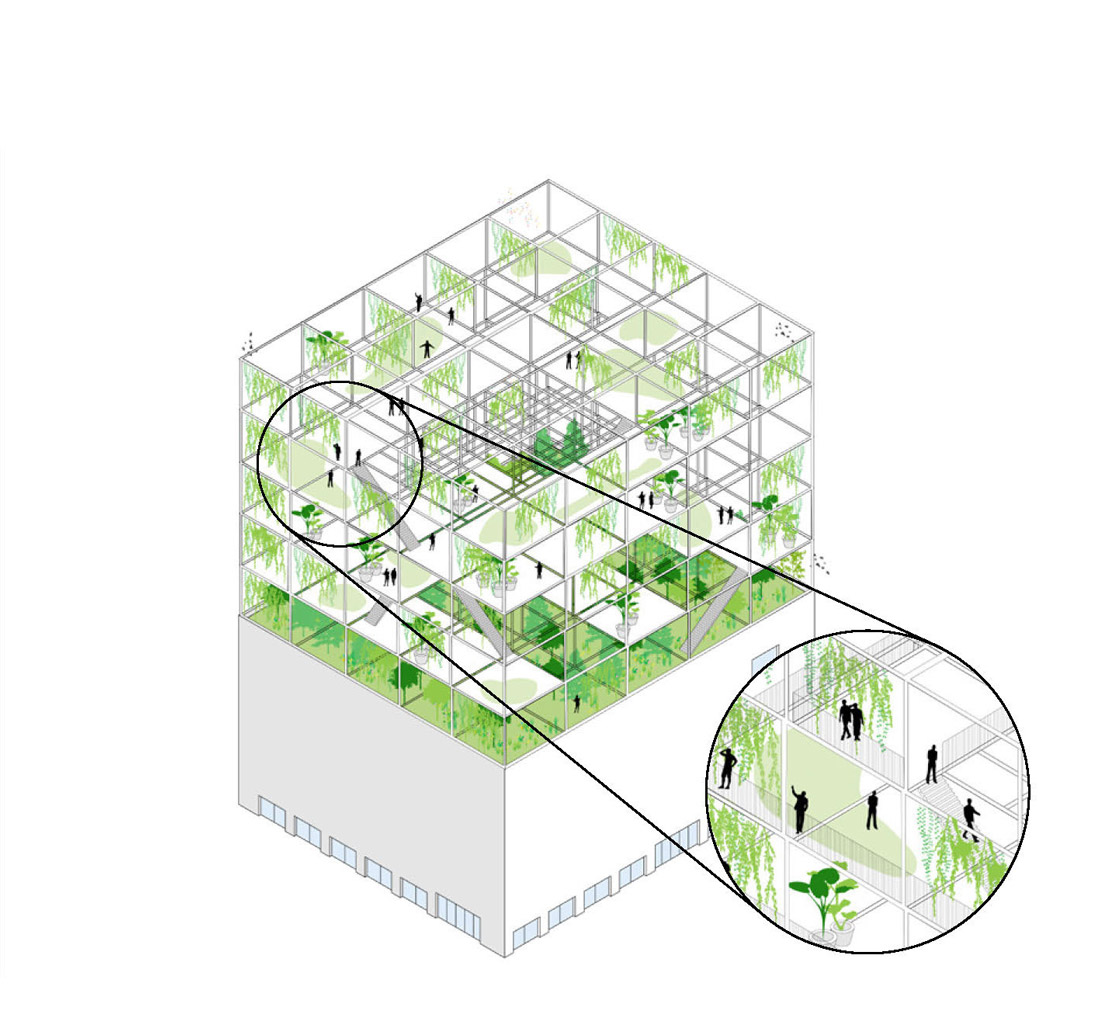 Vertical park. When we think of parks, we often think of horizontal green surfaces, but a park can also be stacked. This creates a great diversity of spaces: spaces where people can meet up, spaces just for animals, spaces for activities, spaces for relaxation and/ or spaces for some peace and quiet. 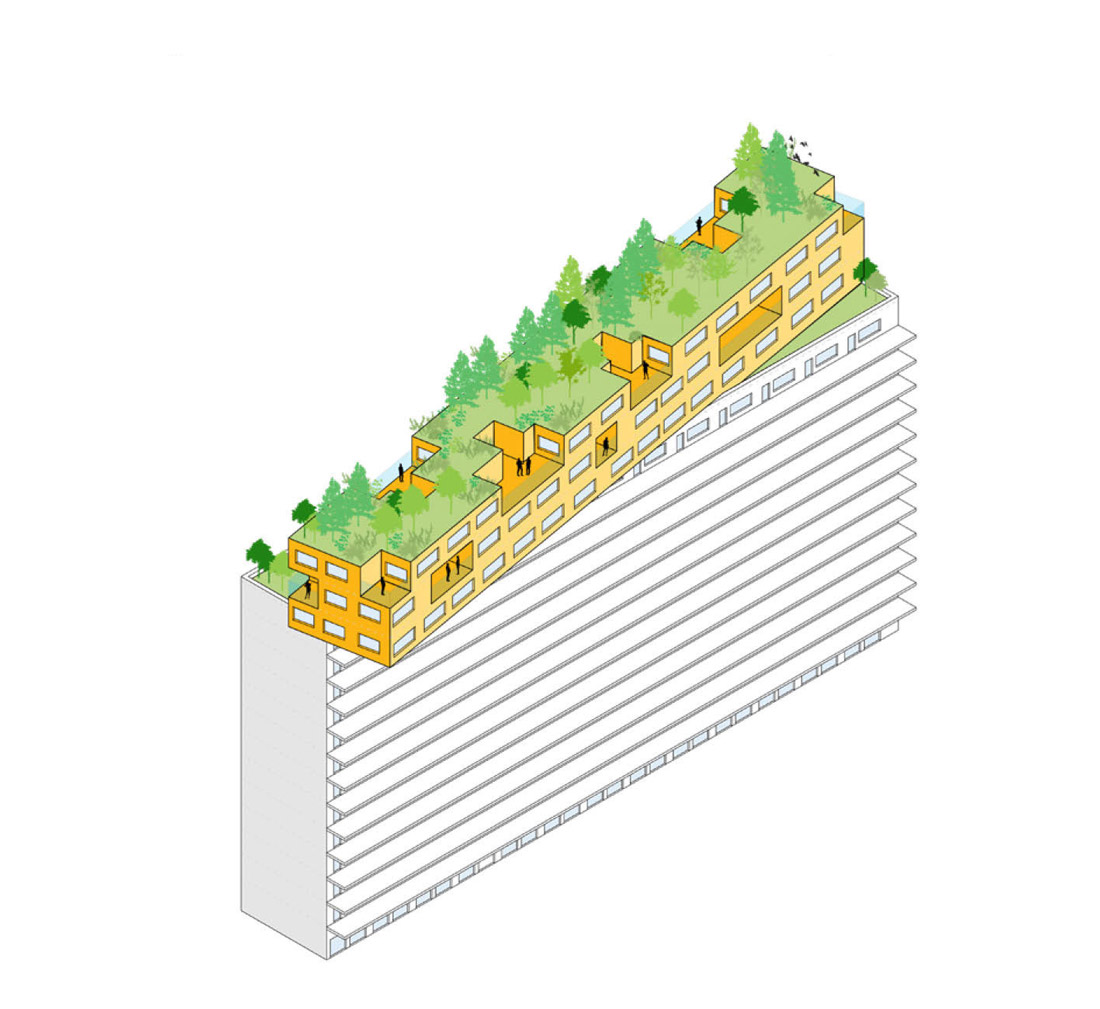 The twist. A new apartment building can be neatly placed on a rooftop within the contours of the rooftop surface underneath, but it can also be given a different twist, creating a contrast with the existing building below. 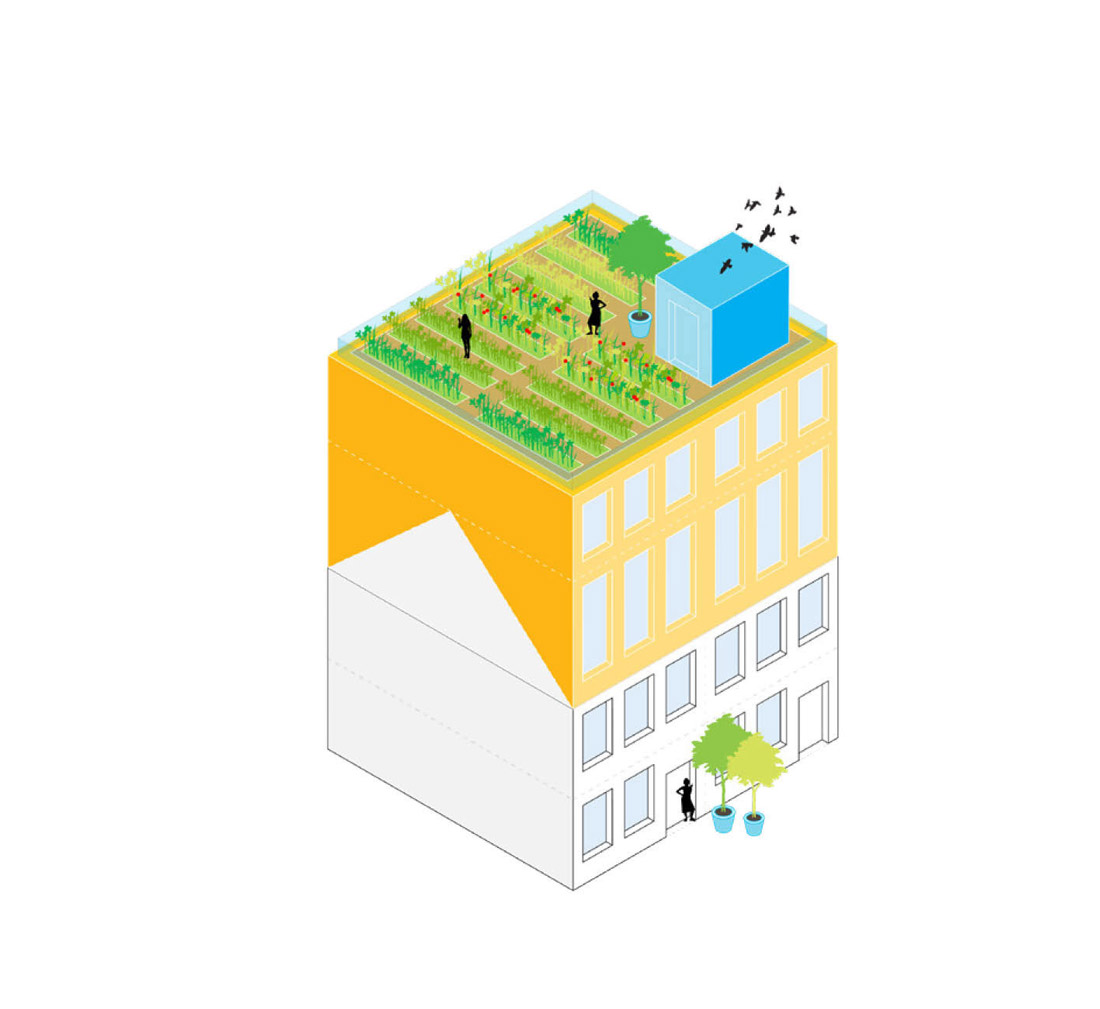 The Rooftop Catalogue shows how roof use can be a solution for the scarcity of space in the city and how it can help to prevent the city from expanding outwards into rural areas. The book aims to inspire people, showing why we should take to the skies and how reprogramming rooftops can help with major issues such as climate change, a lack of housing, and the transition to renewable energy. The catalogue addresses the practical side of using roofs: What are the different options for construction? Which ideas are suitable for which types of building? 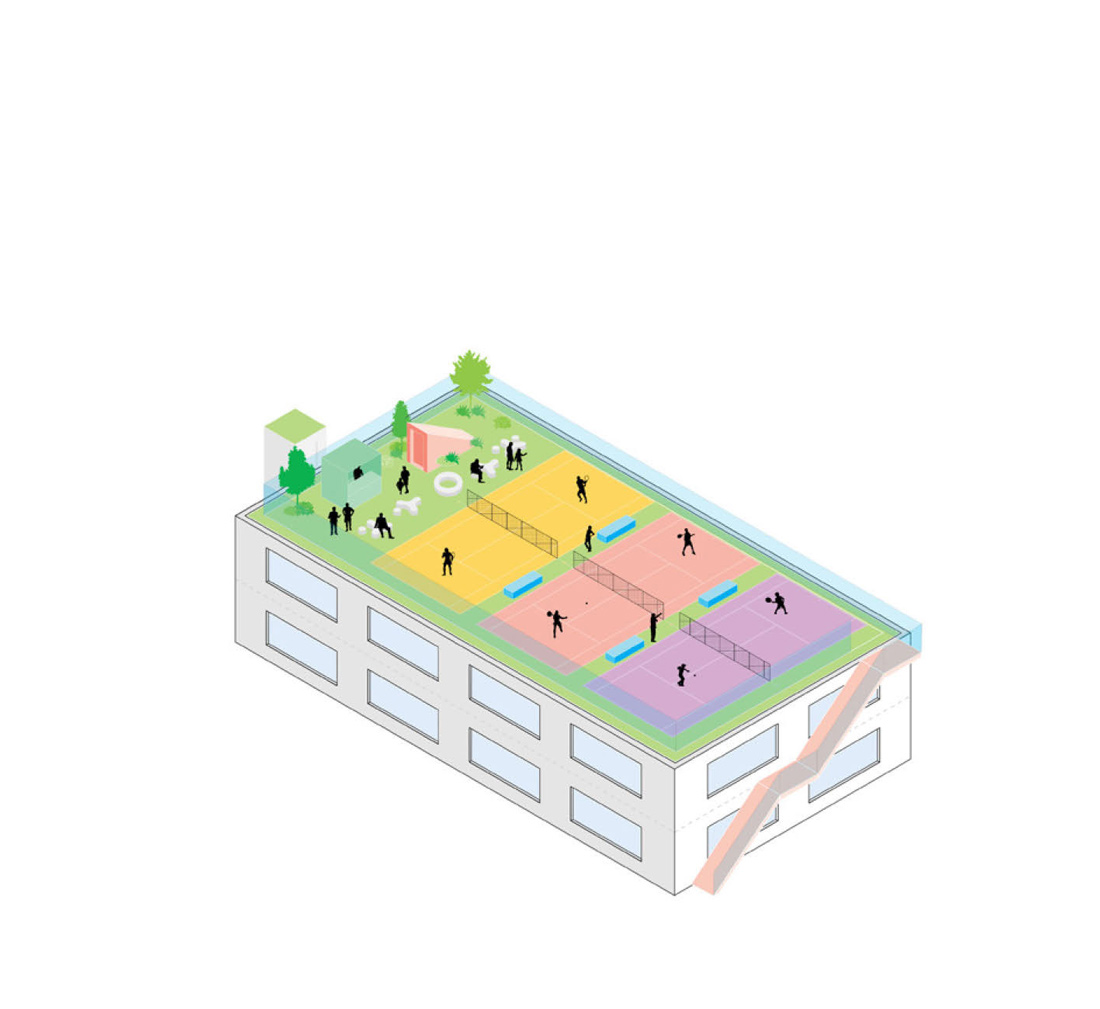 Athletic fields. All kinds of athletic fields could be installed on rooftops. Careful consideration should be given to the proper substrate 8so that the ball bounce sufficiently, for example.) 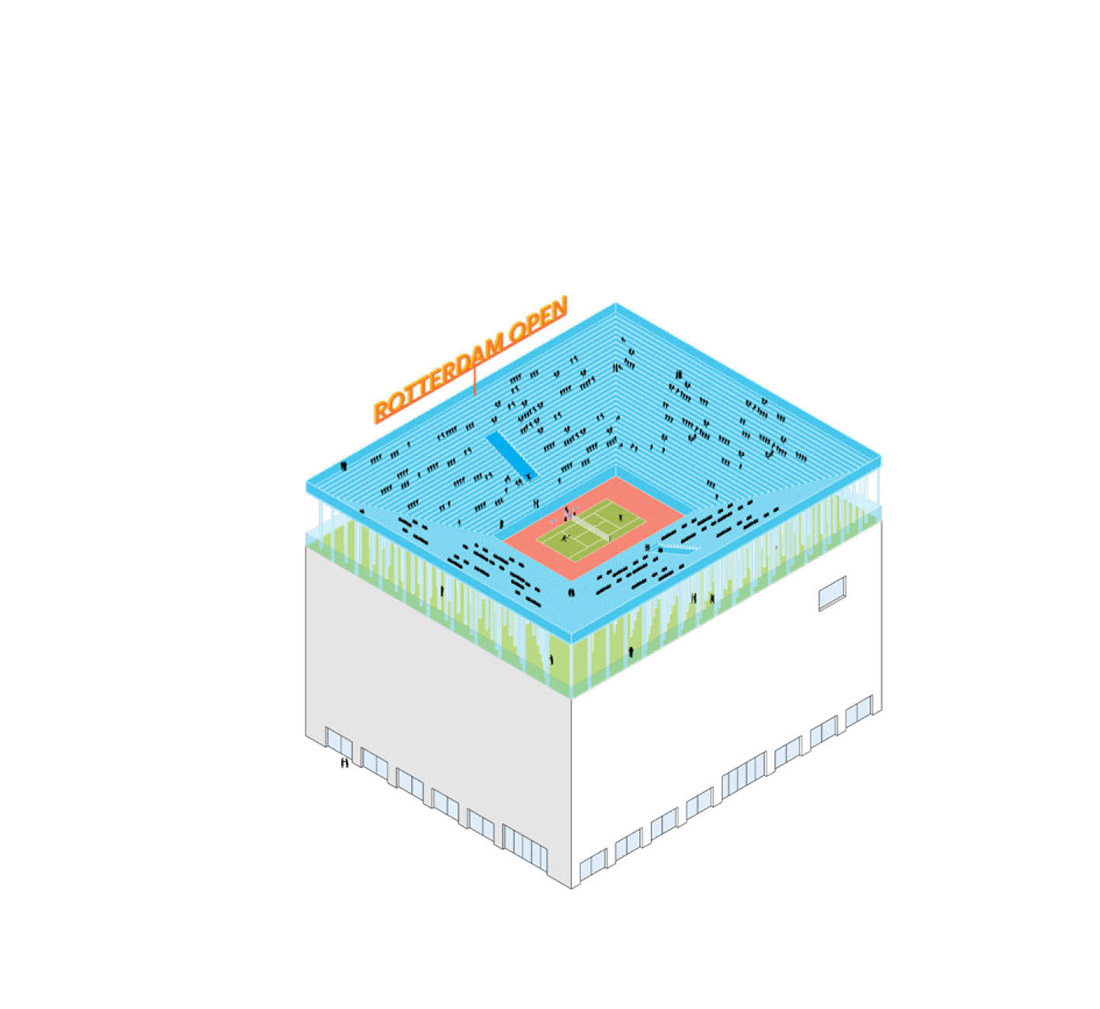 Stadium. In addition to playing sports on a rooftop, people could also watch sports. A small stadium (for tennis or urban sports, for example) would fit on a large rooftop. That way, sports can be accessible to all. The stadium could also be used for cultural events. 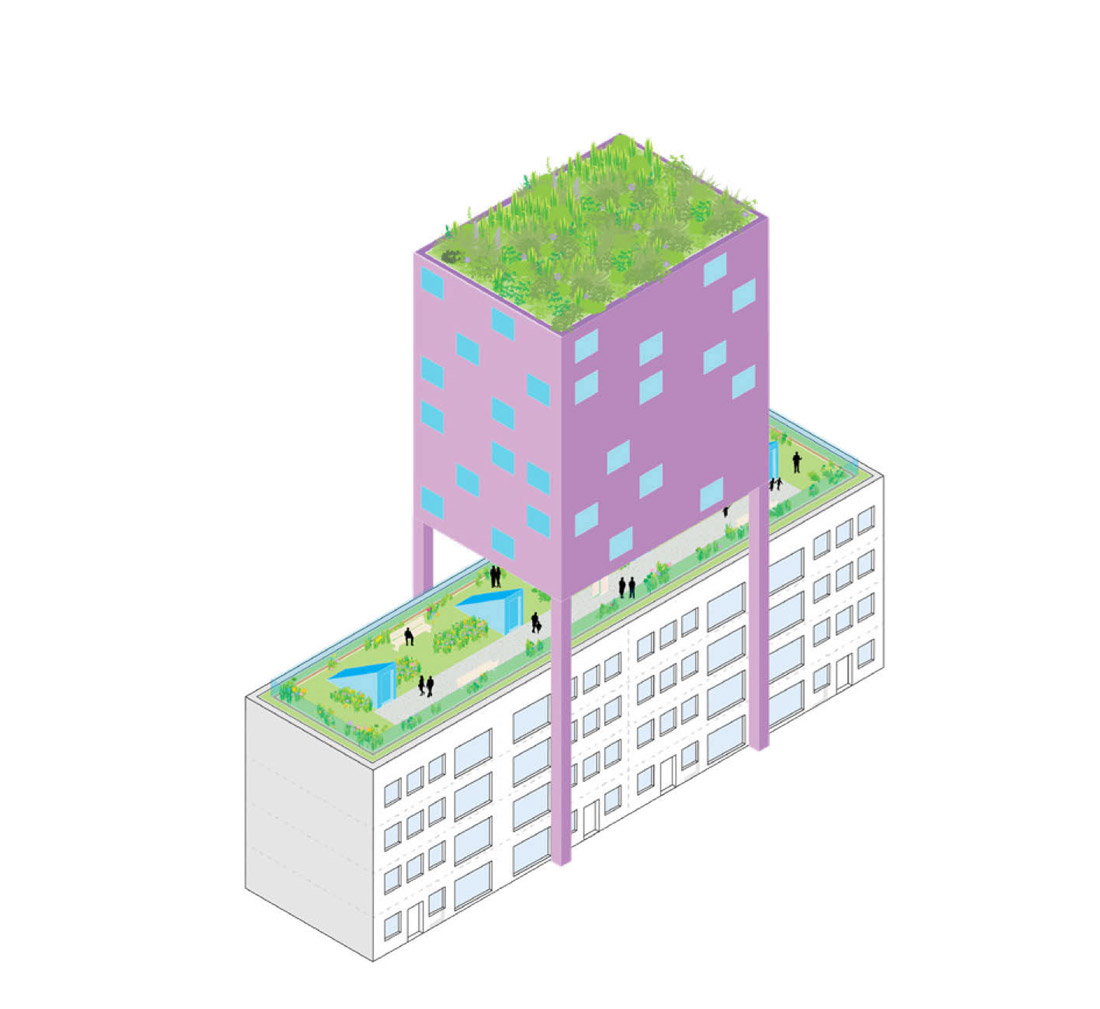 Overhang with common intermediate layer. A separate construction allows for more volume to be added (also see the section on construction.) The rooftop between the new construction and the existing one will be a community garden where everyone can come together. 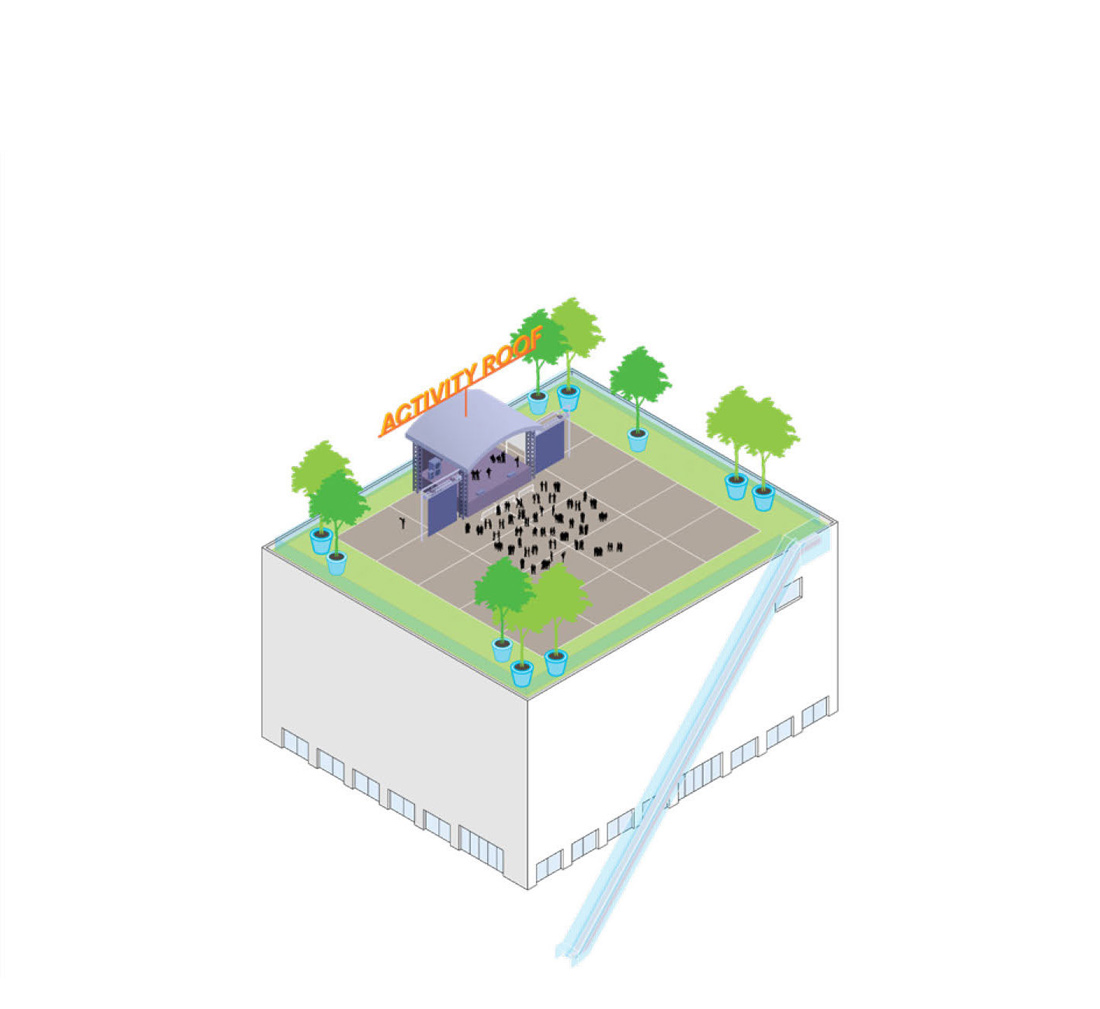 City stage/ event plaza. A permanent stage on a rooftop where events can take place at any time. Of course, the right rooftop must be selected. It should be easily accessible, large enough, and not too close to residential buildings to avoid noise pollution. The stage can stay up and doesn´t have to be taken down after each event.

The Rooftop Catalogue also offers a glimpse of the future; what will it take to make this a reality? “I think we need a new Building Code, or rather a Rooftop Code, with a helpdesk for the homeowners’ associations and corporations that take the initiative. You should be able to stack the four elements – water, greenery, energy, and population – on top of each other, like a sandwich. It should be defined in some kind of regulation that rooftops should be able to support that weight. Stronger structures are more sustainable”, says MVRDV founding partner Winy Maas. 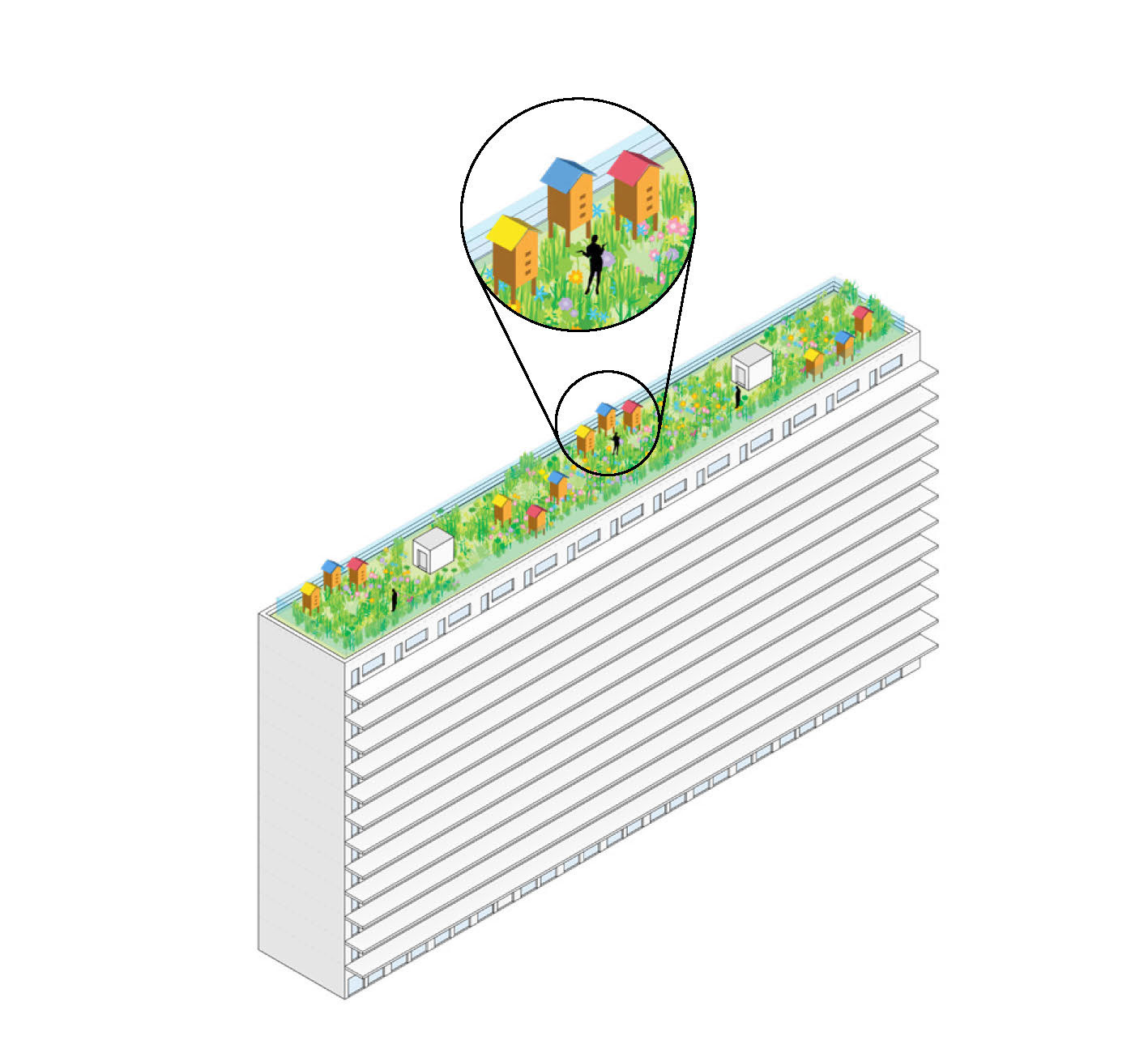 Bee rooftop. This type of rooftop is specifically meant for bees (and other small insects), is full of flowers and other plants and is not accessible to people (except for beekeepers). That way, this rooftop contributes to enhancing biodiversity in the city. 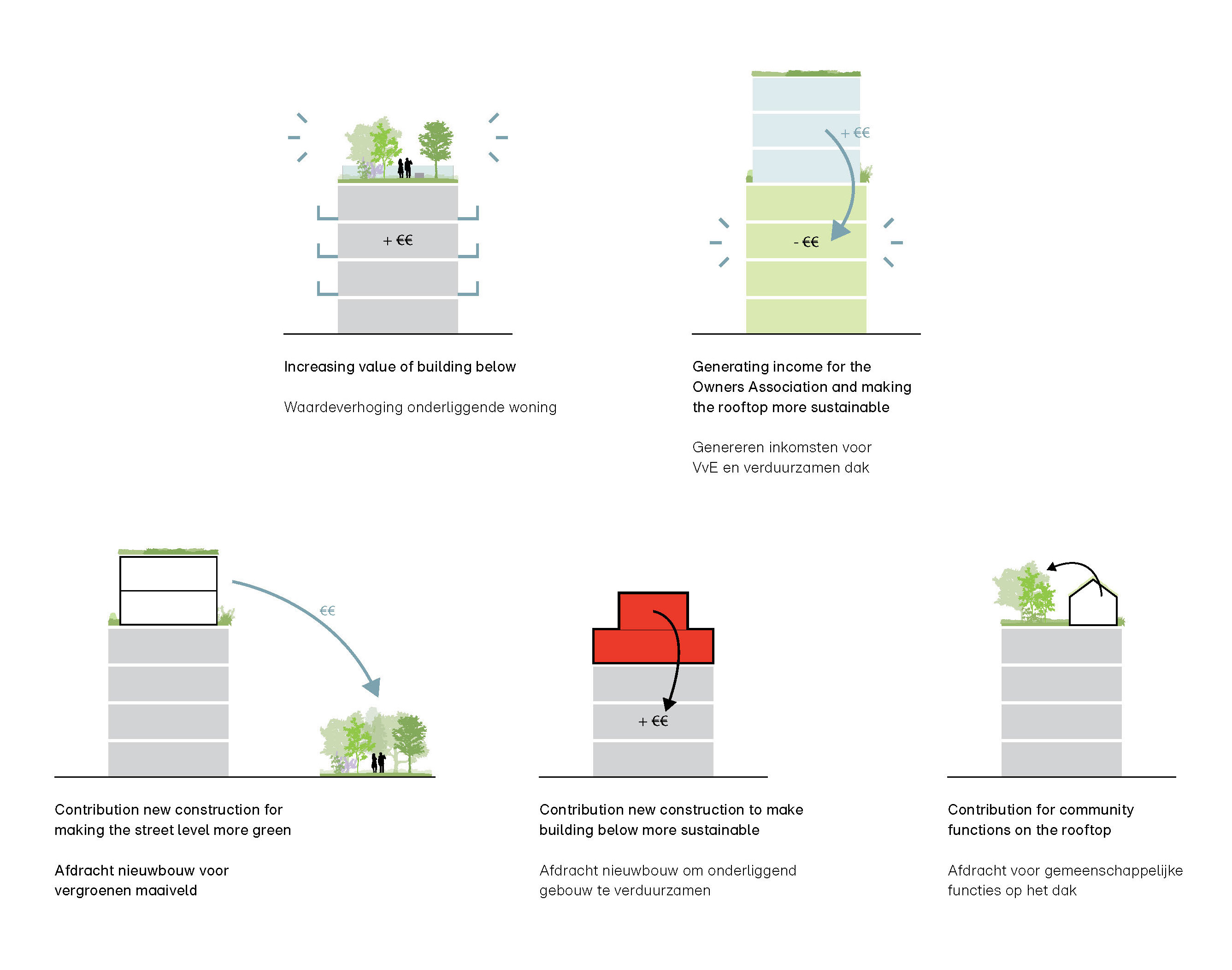 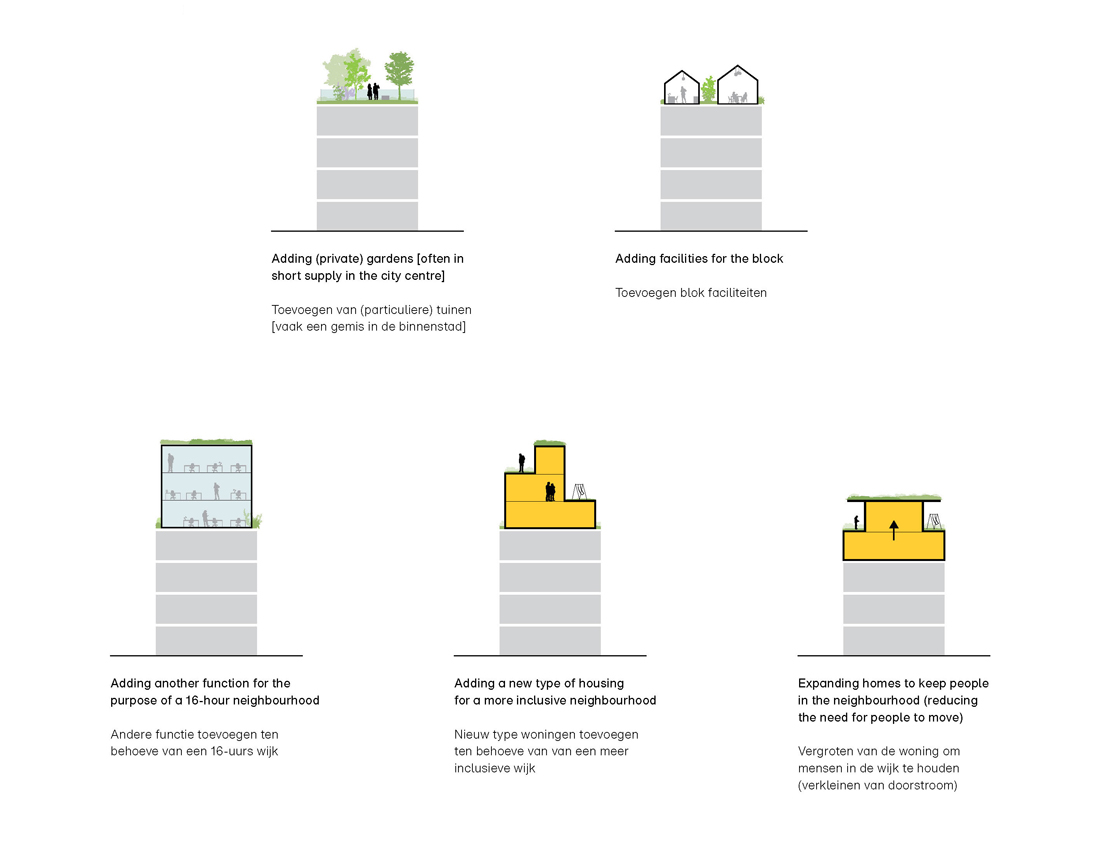 « Kampung Admiralty: A Mix of Public Facilities
The Rural Trend and the City »