The opportunity to build in Paris’s Cité Universitaire today means taking part in one of the city’s most beautiful collections of modern architecture. It is a privilege to build a new pavilion, which will be a free-standing volume and will be well displayed. These conditions, however, do not imply a lack of constraints. 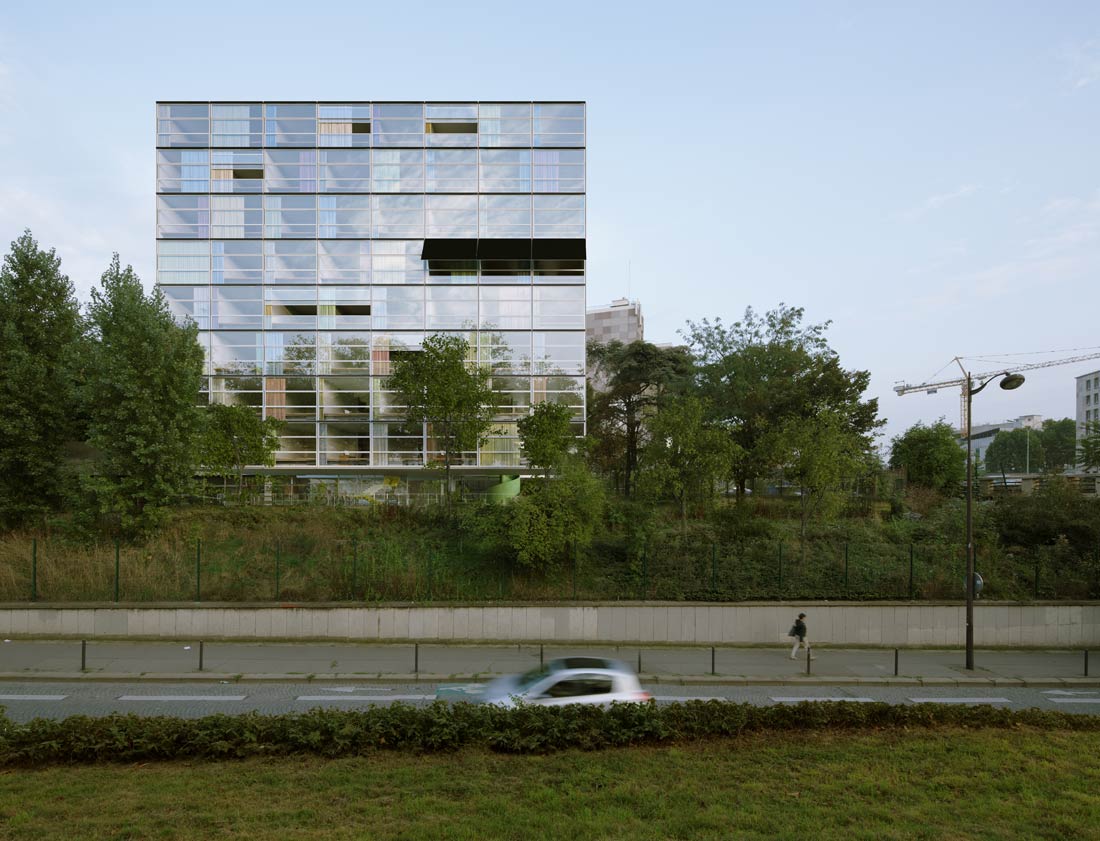 The Cité Internationale’s park, as dignified as it is, does not give us carte blanche. The first issue involves finding the right contemporary language. It has to be imbued with the memory and the character of the site without seeming fake. Building a new pavilion also means figuring out how to settle into this series of strong architectural presences, each with its own recurrences: some stand alone and are simple shaped buildings; some are traditional and strongly marked by their period of time… All of them have aged well. It is the strength of the site that first dictates the project: it suggests proposing a simple building, economical, recognizable, and timeless. Aside from this first priority of not clashing with the existing buildings, the other issue is a question of volume. The location “at the end of the park” raises a few difficulties. First of all, there is the limited size of the plot (1,023 m² for a 4,629 m² program) which, combined with the height limit (25 meters) forces the project toward compactness. Second of all, the presence of the ring road (at the same level, no tunnel or cover) implies all the habitual inconveniences and raises the need for protection.

The idea for the volume is drawn from a close analysis of the program combined with this context. The housing program, mainly T1 and T2 typologies, offers little typological variations and leads us toward a regular and aligned structure. The building is recognizable for its compactness, which takes the shape of a cubical volume. Although the building’s height equals its width, it does not seem monolithic. This is due to a logic of subdivision. In plan, the residence appears as a “split cube”, subdivided into three parallel areas: two housing units on both sides and one common space and circulation unit in the middle. The two housing blocks are situated perpendicular to the ring road. They appear as rather slender, and by their proportions they look like some of the thinnest existing pavilions in the Cité Universitaire. At the heart of the building, the common area is voluntarily treated as a transparent volume, where the elevator and the triangular stairs appear as pure figures. The residence succeeds in a tour de force: it uses compactness without enduring it. On the contrary, this partition in three creating an “H plan” allows for a play of transparency and visual depth. The building suddenly becomes more evanescent. 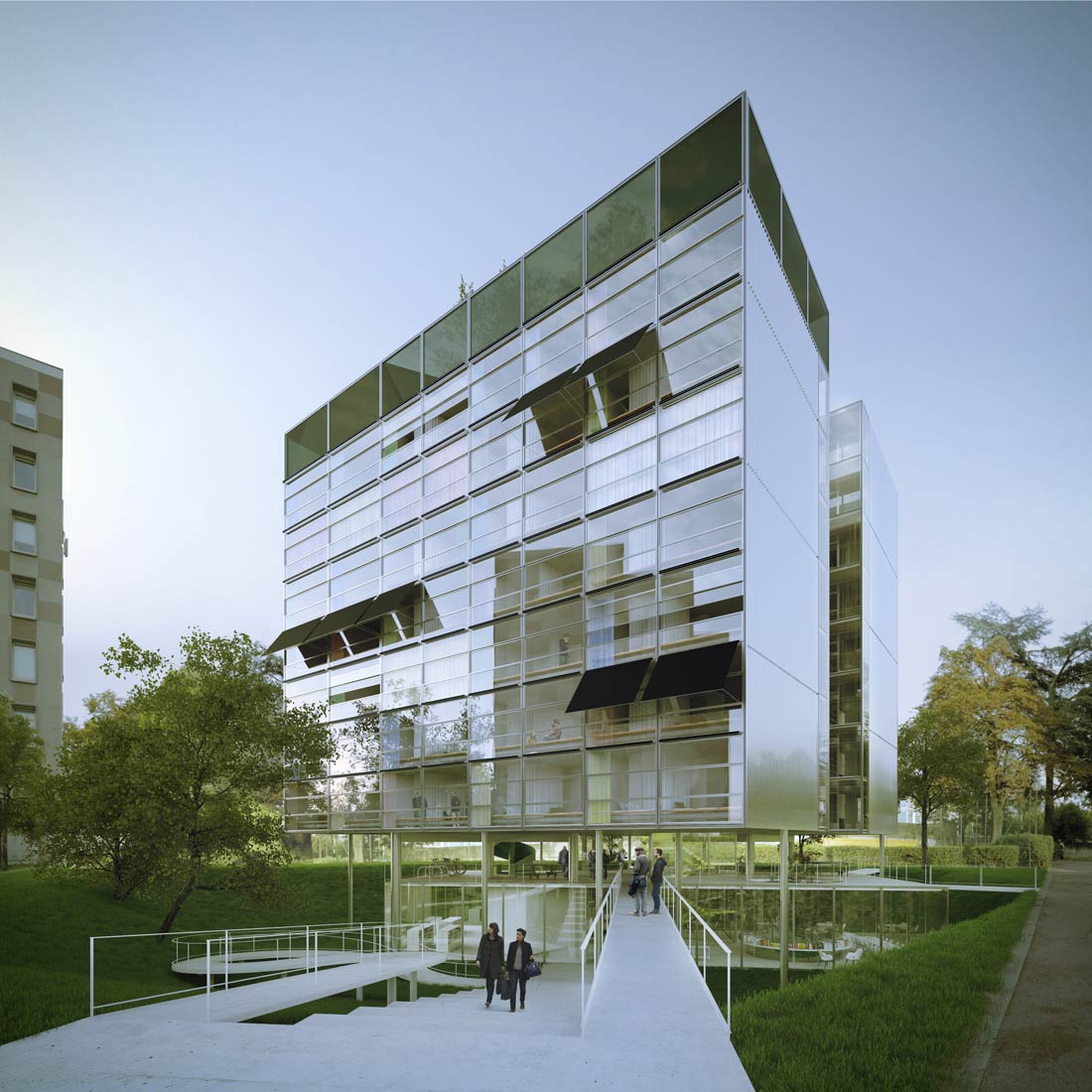 In order to be protected from the ring road’s noise pollution, the building is strategically set up. The ground floor is situated below the natural ground and stays accessible by the use of ramps and footbridges. The ground floor is then totally protected by the height of the soundproof wall. This situation allows the ground floor’s façade to be glassed and to offer views of the planted garden level. In order to avoid the noise from the ring road, the housing unit is lifted from the ground on stilts. Its first level only starts at a superior altimetry compared to the road. In volume, this difference of levels produces a lifted effect, with a “level of air” between the hall’s roof and the floor of the housing units. The hall then appears as a translucent box, discreetly slipped under the two housing units. This configuration becomes the main image of the residence: a building protected from the outside without being introverted. On the contrary, at first sight the building looks ethereal, softly inserted in its environment. 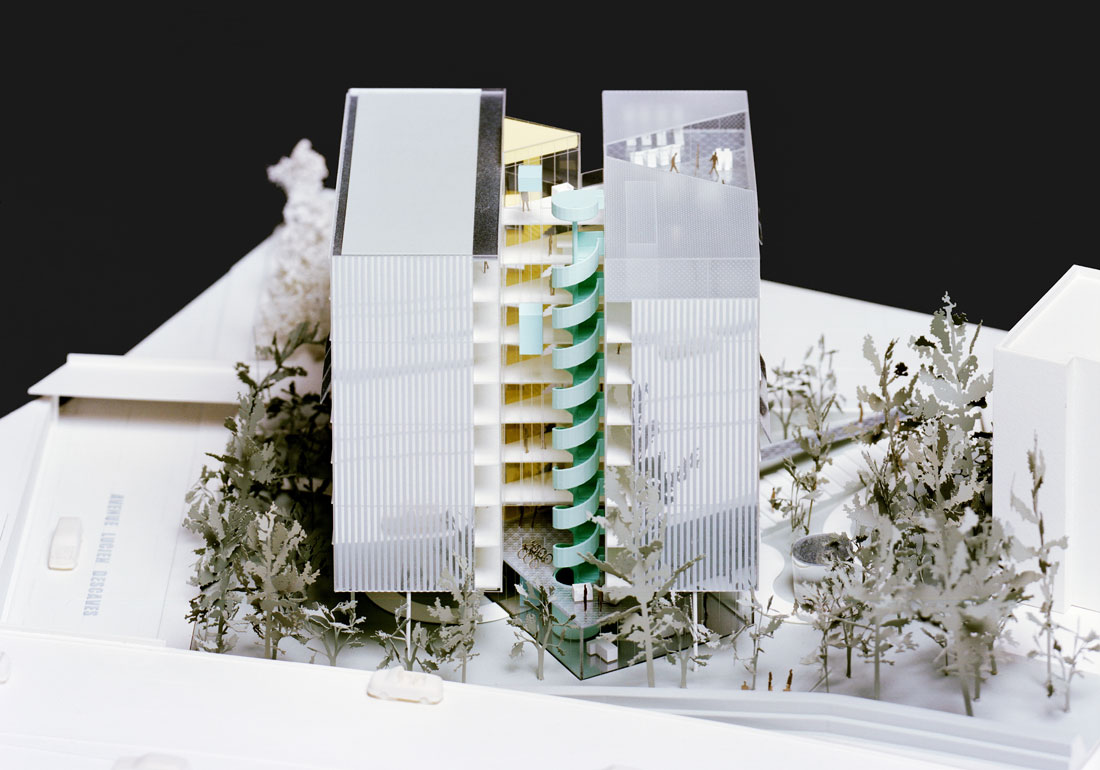 The trees from the park and the existing vegetation contribute to this floating effect. A real permeability happens between the park and the building. The difference of height on the ground level separates two alternative spaces. If the visitor follows the ramps, he arrives at the garden level, where he can find a reading room and a living room organised around a central patio. In this way, the ground floor is a generous space, planted and large. It is sometimes open to the sky, sometimes closed. It becomes garden, courtyard, bike rack, and playground. It is a “plus” surface, dedicated to activities and sharing. Like the volume above, it is coherent and nuanced. The utilisation of this free ground floor is kind of a reinterpretation of a “grand classic” in the Cité Universitaire (see the Pavillon Suisse by Le Corbusier & Pierre Jeanneret).

Radical choices make the façades purposely very easy to read. The east and south façades are entirely glazed in order to enjoy the free view over the park. All the same, the glazed façades do not look like anonymous curtain-walls. The scale of the housing unit is still perceptible through the structural grid. In order to preserve intimacy and to offer sun protection, the project uses large awnings. The different housing typologies (T1 25 sqm, T1bis 30 sqm and T2 43 sqm) are optimised to perfectly fit the structural grid. One common point: all flats are double oriented. The width of the flat and even the outside park can be seen from the entrance door through the opposite bay window. The functional spaces (kitchen, bathroom, storage) are compacted to free up as much space as possible for the living areas (bedroom and living room). This effort of rationality and ergonomics takes the form of an “equipped strip”, with the kitchen/storage/desk, used as a dividing wall. In the T2 typology, the bedroom partition wall is removable, leaving the choice to its occupant to turn the flat into a large free space. The large glazed frames also provide a wide openness. When the weather will allow it, the flat itself can become a terrace. 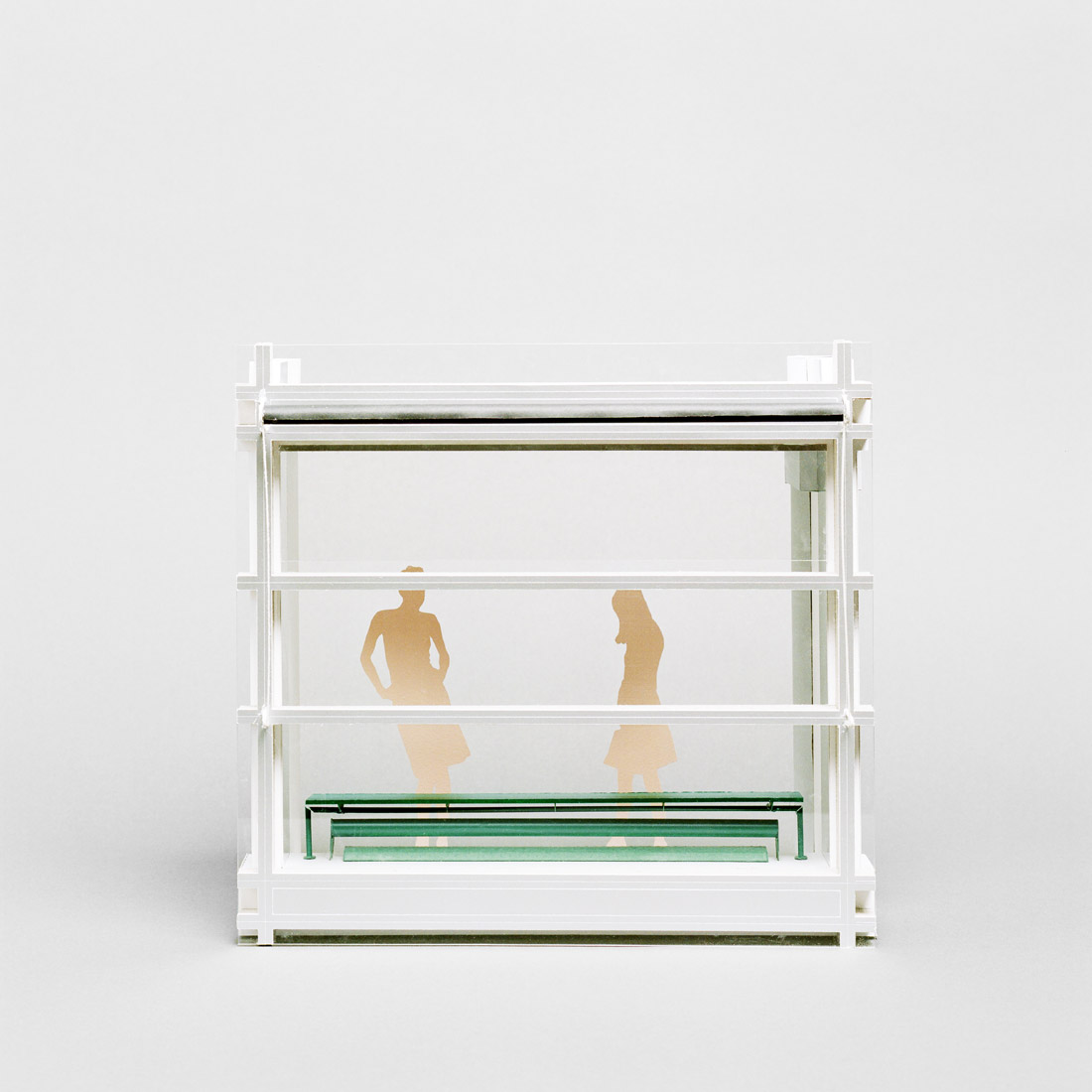 On a more global scale, this rationality of the plan allows for creating an intermediate space, in between the circulations, into the heart of the building: a sharing room for the researchers, between the elevator and the walking paths. There again, the rigorousness of the spatial organisation allows for offer this “extra” space. This space will be a transition space and will allow for sociability and open meetings.

The final elements of the program are the fitness room and the common terrace. They are treated as autonomous volumes, set on the last level. These final elements voluntarily create a dissymmetry between the two blocks. In this way the building escapes an overly rectangular expressivity. at the same time, the spaces become an overlook onto the city and a reference point.

The guiding purposes of this project are optimisation and expressivity. All the conception and execution choices are used for a very distinct aesthetic point of view. The design was influenced by the building’s glorious neighbour, Claude Parent’s Fondation Avicenne, which was the first to make good use of the proximity of the ring road: density, plasticity and endless views. This residence is made to be seen from far away as well as very quickly by drivers. By day, the glazed façades give the building a kind of dignity. By night, it becomes a “lantern-building” as the housing lights glow from within. Day and night, the residence stands as a beacon, offering a new image of contemporaneity for the Cité Universitaire.