The Red Cross Volunteer House gives 34,000 volunteers a setting for the continuous development of their work in Denmark. The building is designed by COBE in cooperation with the volunteers as a celebration of volunteer work and commitment and as a meeting place for the volunteers, the city and anyone wishing to contribute to the work the Red Cross does for marginalized citizens. 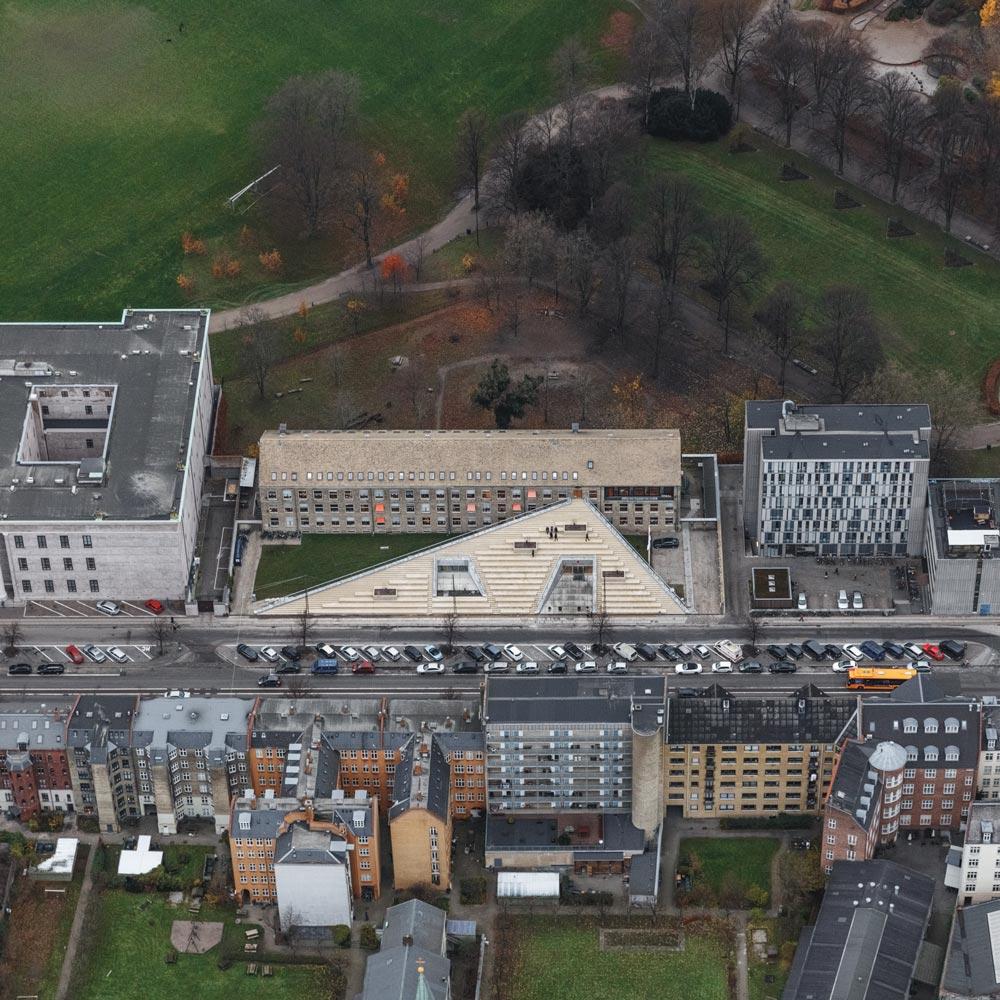 The Red Cross Volunteer House is an extension of the national Red Cross headquarters in Copenhagen. The triangular building has a 850 m2 roof that acts as a large public staircase, extending from the street level to the second floor. The extension, which has a floorspace of 750 m2, is placed partially below ground and serves as the main entrance to both the headquarters and the volunteer centre. The Red Cross Volunteer House was designed with the aim of creating a new meeting place for the 34,000 Red Cross volunteers, as well as a new public space: an urban living room that gives something back to the city. 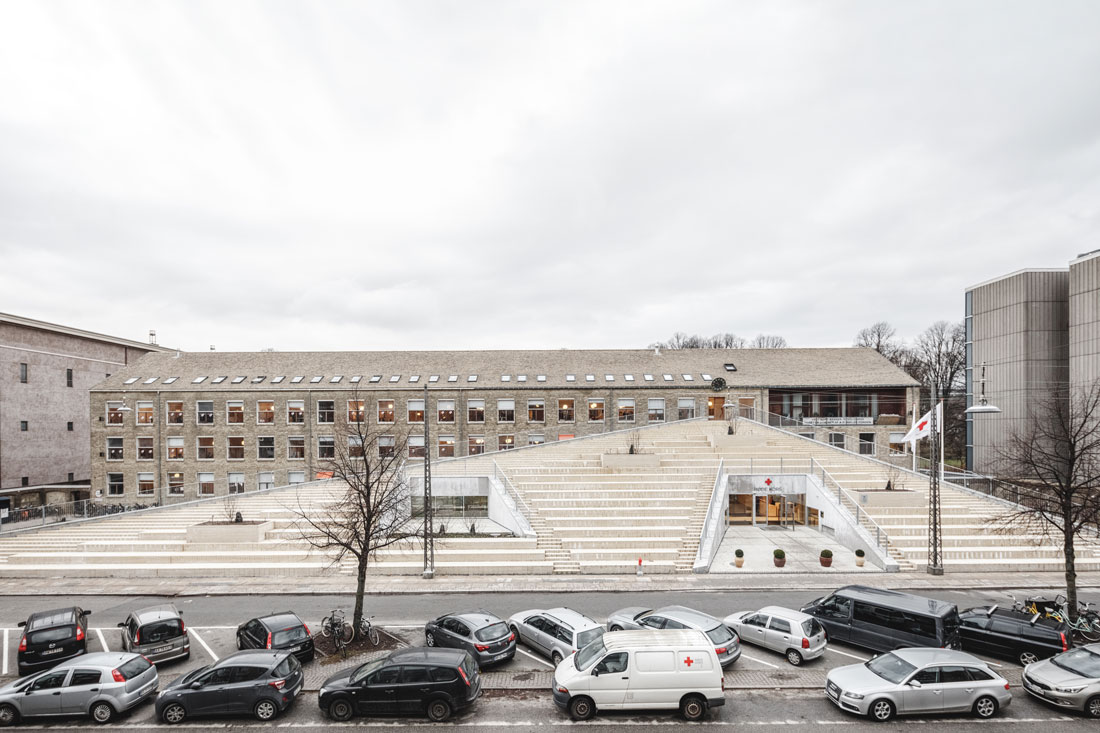 That goal has been realized. “With the Red Cross Volunteer House, we wanted to create a place that provides optimal settings for the heroes of everyday life – the thousands of volunteers who make an extraordinary effort to help marginalized people. The roof of the building is now the Red Cross’s face to the world and a unique meeting place that acts both as a terraced stand and as stairs, while also offering an attractive and inviting space to the many thousands of volunteers and, equally, to passers-by and the rest of the city. The building has become an urban space and expresses both generosity and modesty while inviting the outside world in,” says Dan Stubbergaard, architect and COBE founder. 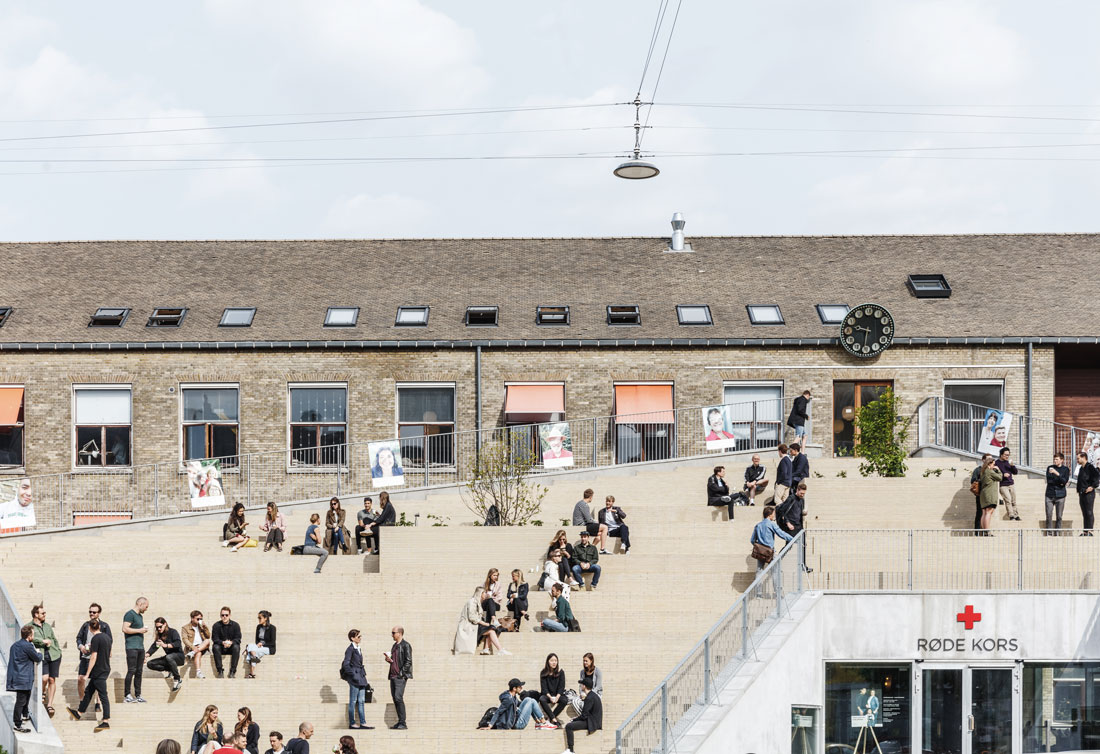 COBE developed the project in close collaboration with the Red Cross and representatives of the volunteer organization. In a dialogue-based process, everything from the spatial programme to the design of the building was tested, discussed and adapted. After the opening of the building in November 2017, the Red Cross has attracted added attention: more than 500 volunteers use the building every month, 60 local branches have visited, and more than 8,000 curious outside visitors have stopped by.

“The Red Cross Volunteer House makes an important contribution to the support and development of the volunteer effort that is at the heart of the work of the Red Cross. The Volunteer House has an open and inviting architecture that is in keeping with our ambition of being an organization in continuous dialogue with the community. This is not just a building or a place – it is a space for exchange and development. A creative setting that inspires creative solutions. We have already seen this in practice, and I am certain that, in coming years, we will continue to see many new ideas for tomorrow’s civil society arise in our Volunteer House. Time and again, we see the capacity of the architecture to inspire and promote the development of the volunteer effort in the Red Cross,” says Anders Ladekarl, secretary general of Danish Red Cross. 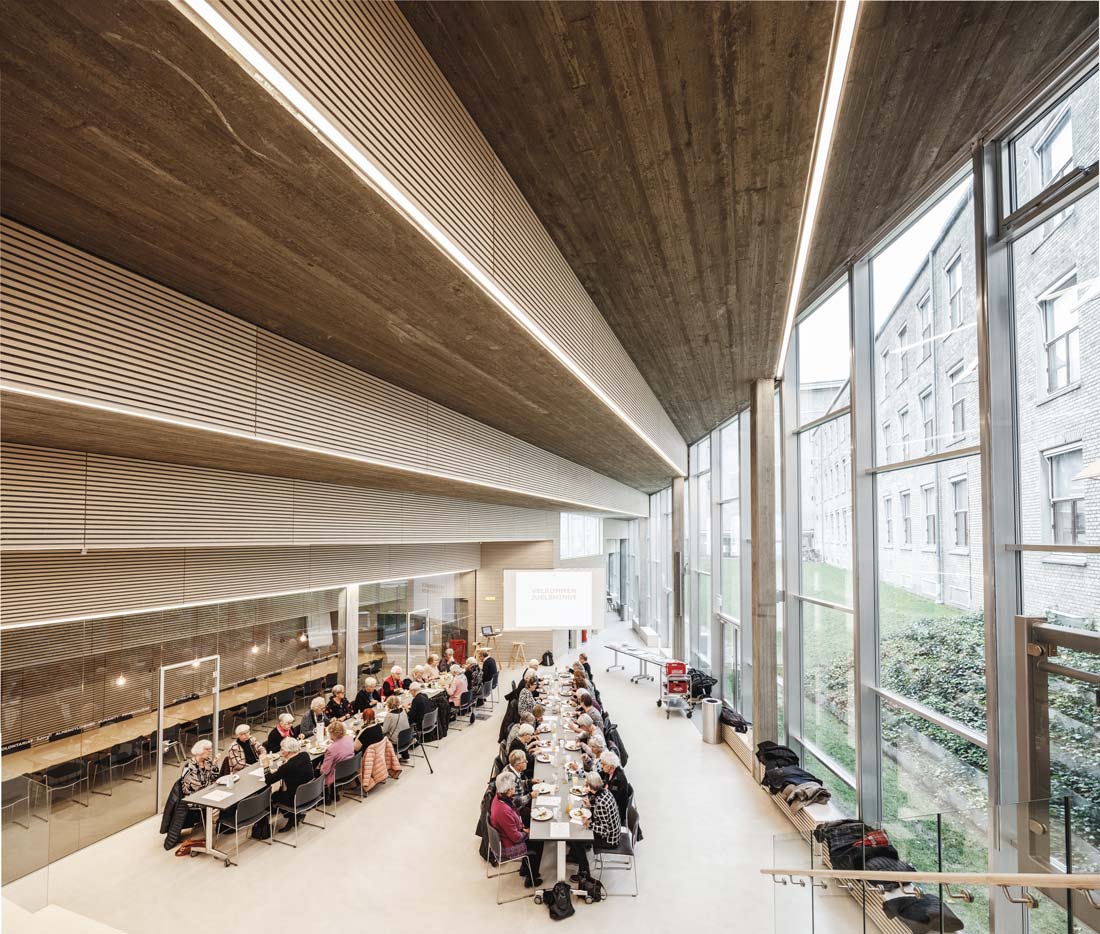 An Iconic Building Adapted to its Site

The spectacular roof slope and stair simultaneously blend into and reinterpret the unique character of the area, with the adjacent park Fælledparken and the Danish Freemasons’ Hall, as well as the Red Cross headquarters themselves, a yellow-brick building that is the former Copenhagen County hall. The stepped roof was built using the same yellow bricks. It has become a popular meeting place: in summer, volunteers and staff hold meetings here, passers-by stop for a break, and locals use the steps for anything from workouts to coffee appointments. 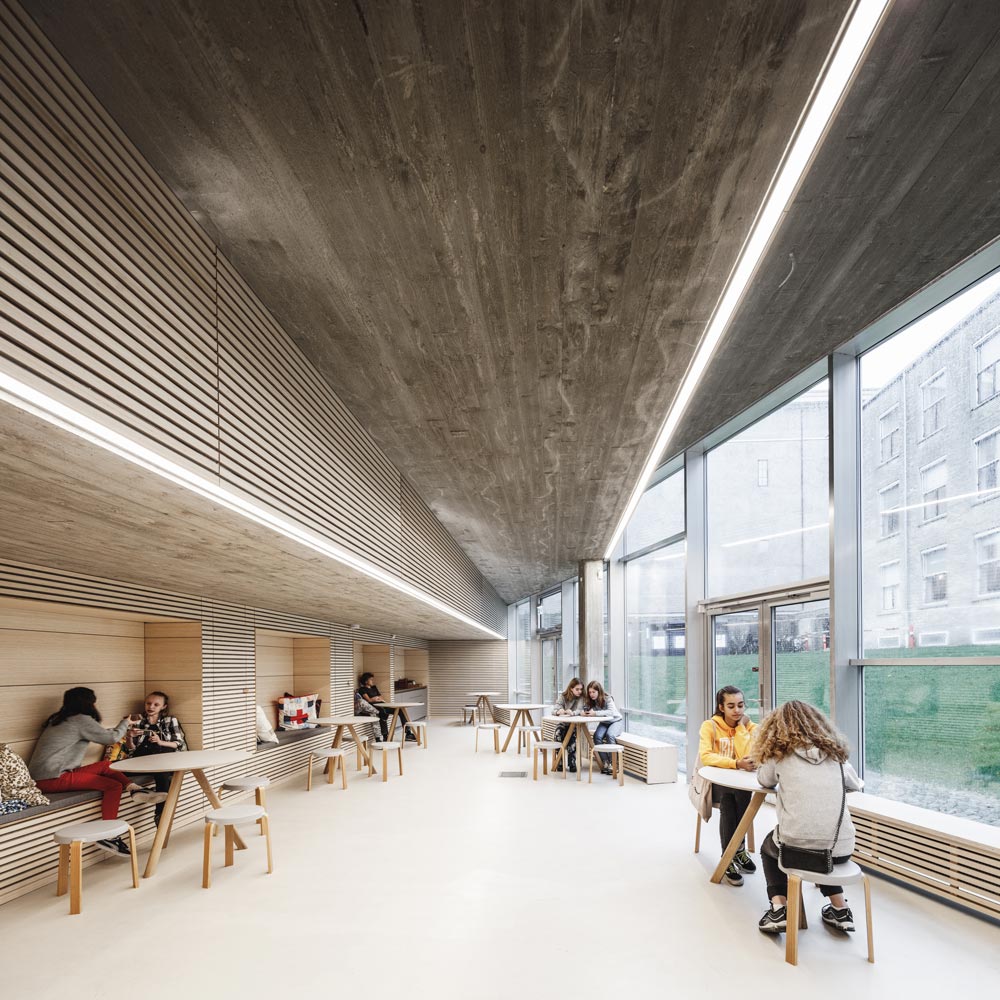 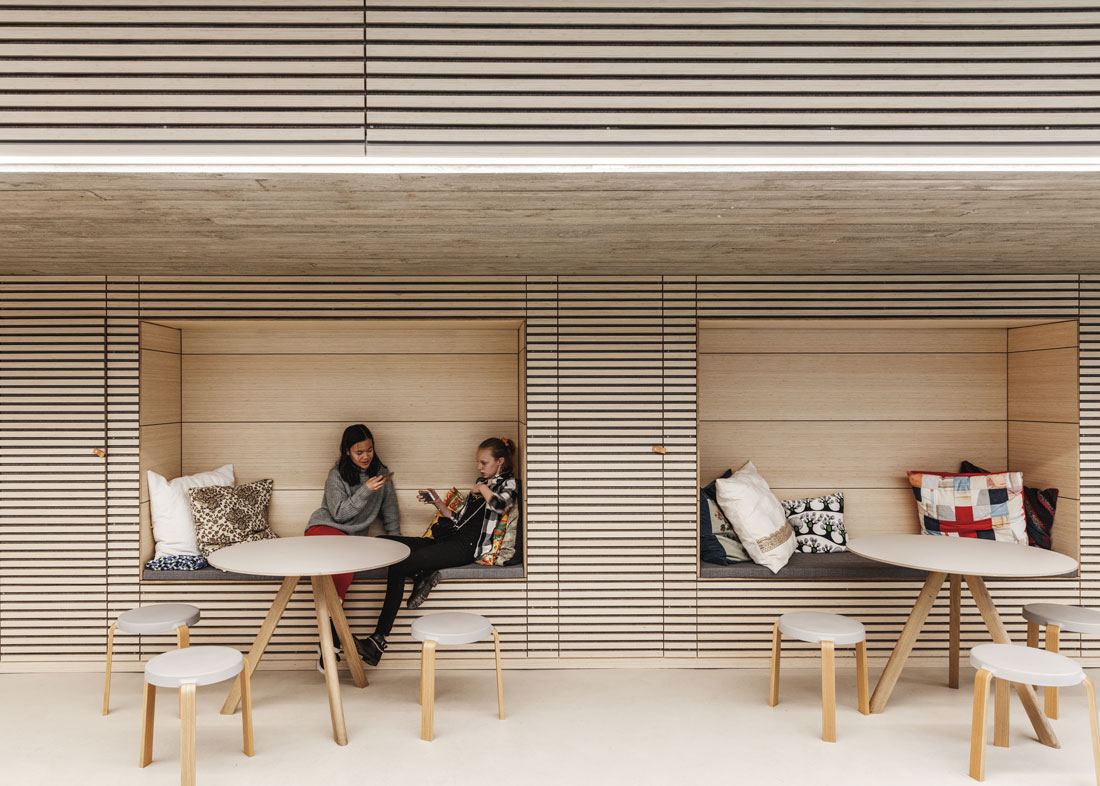 Going inside, one is met by a common arrival area shared by the volunteer centre and the headquarters. To the left, the Volunteer House opens up in the form of an open terraced stand and auditorium with capacity for more than 100 attendants. This space leads down to a series of conference rooms that can be used for training and meetings, events, presentations, film showings and many other activities.

The stepped roof surface opens up towards the headquarters, which are visible from any position within the Volunteer House. The original building and the new extension are further linked by a green park. The Red Cross Volunteer House also offers a common space for employees and volunteers to meet, thus providing ideal conditions for development and cooperation to flourish.

The new building was made possible only with a grant of DKK 30.7 million from the private foundation A. P. Møller og Hustru Chastine Mc-Kinney Møllers Fond til almene Formål.