Initiated by the US Department of Housing and Urban Development (HUD) and the Presidential Hurricane Sandy Rebuilding Task Force, the Rebuild by Design (RBD) competition proposed to connect the world’s leading researchers and designers with the Sandy-affected area’s active businesses, policymakers and local groups to better understand how to redevelop their communities in environmentally and economically healthier ways – as a response to Superstorm Sandy’s devastation in the region. 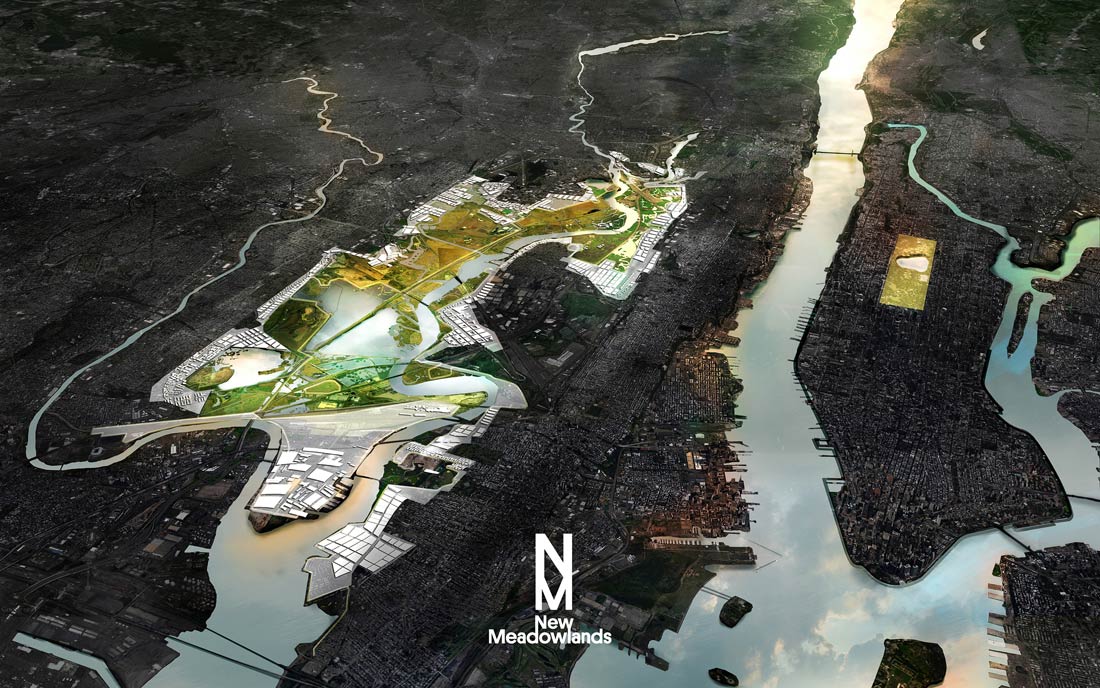 The MIT CAU+ZUS+Urbanisten team devised a regional analysis strategy which layered a wide spectrum of risks and vulnerabilities, combining flood risk with social vulnerability, vital network vulnerability, pollution risk, etc. The analysis identified the Meadowlands as a key investment priority for the tri-state area. The team developed this analytical method in order to spatialize federal investment priorities. The underlying argument is that a dollar is best spent when it addresses the biggest variety of risks (including but also beyond flood risk) to the largest plurality of stakeholders (starting with vulnerable populations and economies).

Within the Meadowlands basin, the team identified three pilot areas as candidates to host the first stages of the project. The southern tip consists of South Kearny and the western waterfront of Jersey City. The eastern edge contains Secaucus and a portion of Jersey City. Finally, the northern edge includes sections of Little Ferry, Moonachie, Carlstadt, Teterboro and South Hackensack. HUD awarded implementation funding to this last pilot area. In each of these areas, the project consists of a mix of actions, specifically; (a) berms and public space design and construction; (b) rezoning; and (c) integration with other ongoing initiatives. 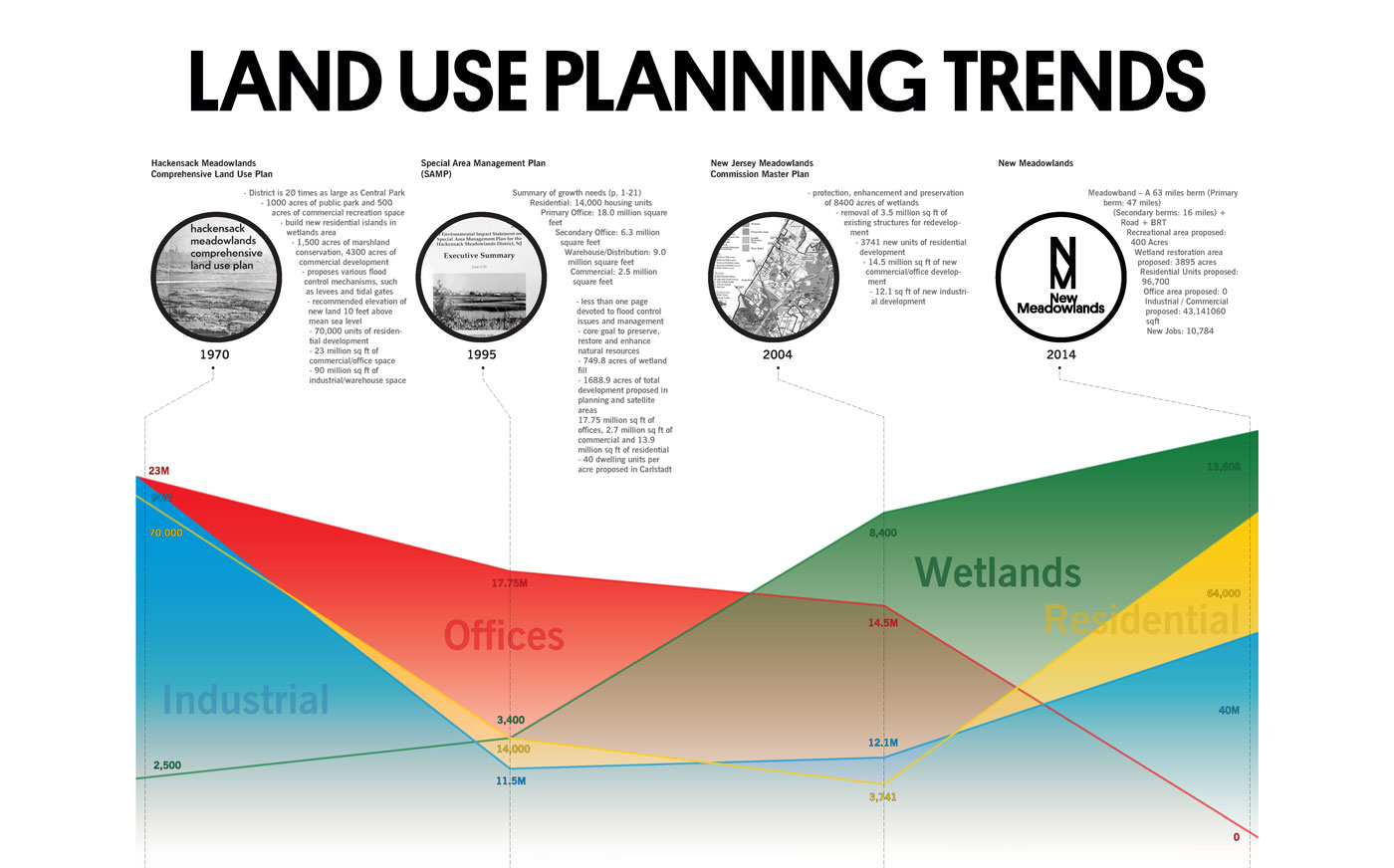 The ‘New Meadowlands’ project articulates an integrated vision to protect, connect and develop this basin and surrounding areas as a critical asset to both New Jersey and the metropolitan area of New York.

Two key spatial concepts comprise this project: Meadowpark and Meadowband. The Meadowpark connects and upgrades both existing and new marshes and freshwater basins with an intricate system of higher and lower berms. These provide flood protection for the area from coastal flooding to rainwater flooding. The team proposes to make the resulting overall, contiguous landscape accessible (along the berms) thus providing recreational and cultural opportunities. The outer edge berm, which defines the landscape and the beginning of the development and urban areas, is called ‘the Meadowband’. This term describes a civic amenity: a berm covered by a street lined with business, retail and residential opportunities, overlooking the park. A series of ‘park addresses’ line up along this civic amenity, guiding the ongoing real estate pressure for residential development into a cohesive urban fabric.

The team has detected a unique constellation of opportunities in the Meadowlands, at the crossroads of which it is entirely possible to propose a bold project to make the basin resilient, with benefits far beyond protection against flooding alone. The first and most important of these opportunities is a willingness to move beyond the status quo. We found a ‘coalition of the willing’ amongst many conversation partners, whether mayors of municipalities, ecological activists, business owners or developers – a real will and desire to think bigger and transform the Meadowlands from its current state to a far better, stronger and more attractive basin. In addition, the gradual efforts at ecological restoration undertaken by the Commission in the past years, have led to a new reality on the ground. Whereas the Meadowlands used to exist in the public imagination as a dumping ground, this perception no longer corresponds to reality. The contours of a regional landscape park, as a wildlife refuge, are becoming visible. It is now possible to envisage a completion of this project. At the same time, we see increasing pressure for development – not only for more logistics and supply chain functions, but also for residential development. These pressures can and should be accommodated in the region if appropriate mass transit options are made available. Both park and residential would add value to each other, and therein lies the grand bargain set up by our proposal. 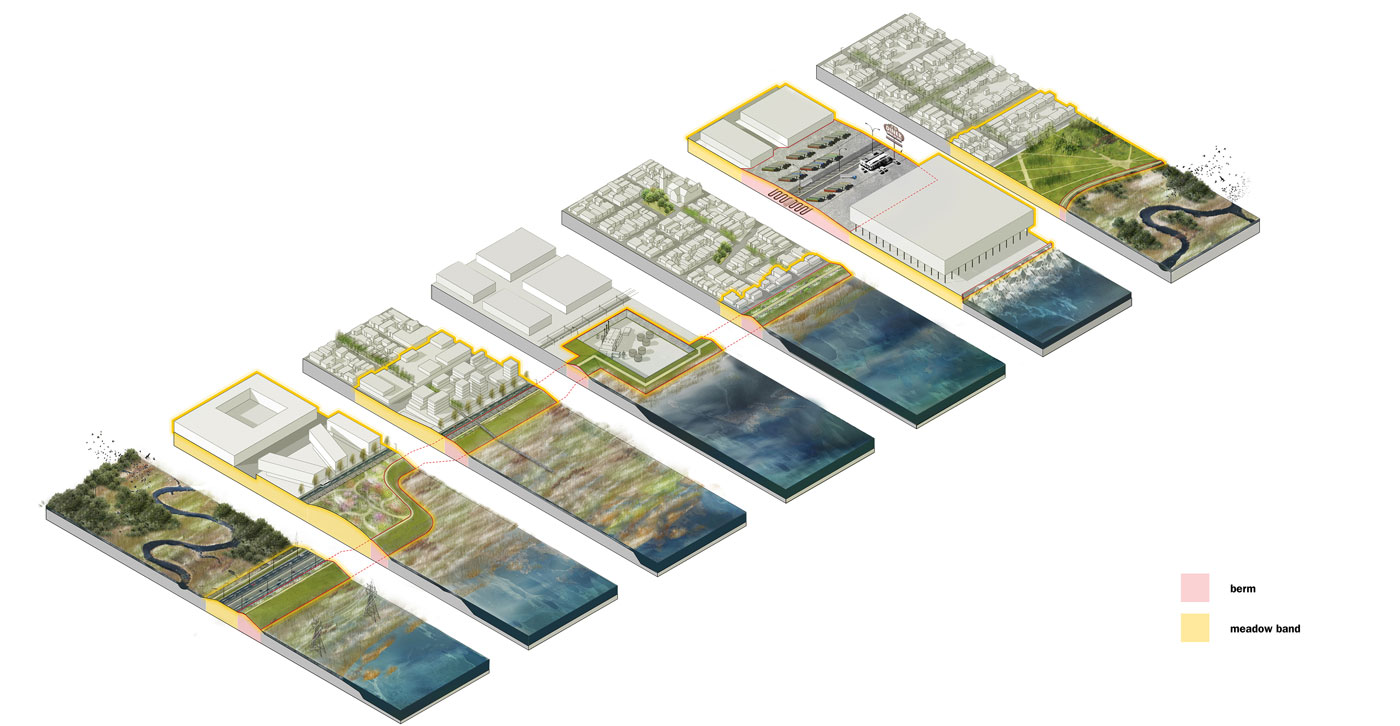