Published in "GSD Platform 6. A Year of Research through Studio Work, Theses, Lectures, Exhibitions and Events", 2013 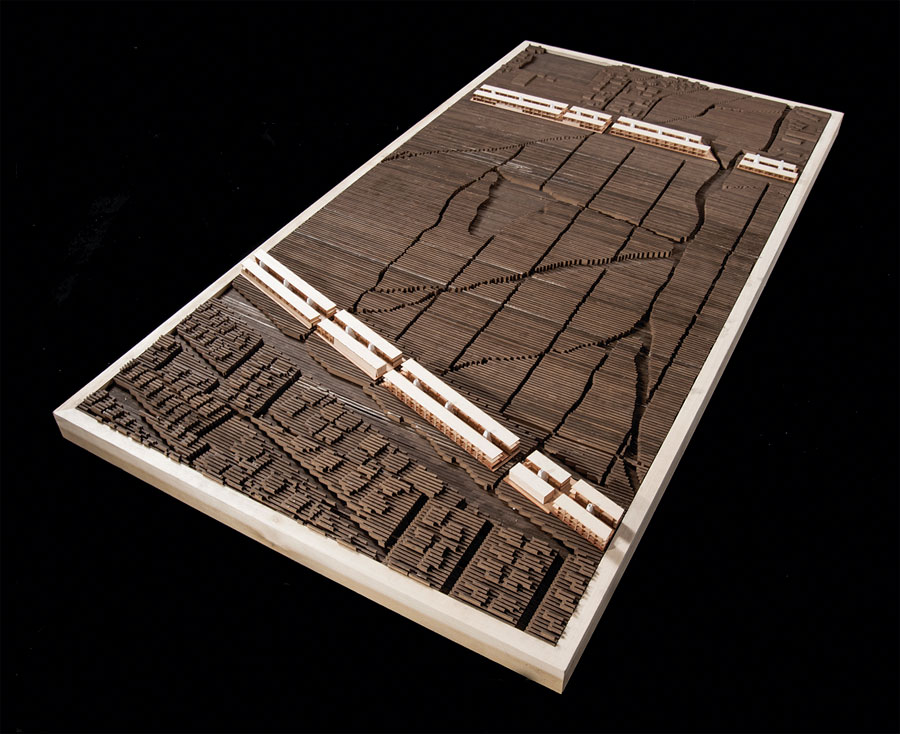 With more than 1 million inhabitants, Ouagadougou is the largest city in Burkina Faso and the country’s administrative, economic, and cultural center. The city experiences a population growth of approximately 100,000 migrants each year from the surrounding rural areas, creating new neighborhoods, many without electricity or running water. Moreover, the majority of Ouagadougou’s buildings are one-story clay constructions. The aim of this design studio is to generate new affordable living spaces for the low- and middle-income groups within the city. The project involves the creation of a 45-square-meter modular housing unit for a family of five. This standard module is used in a new urban development of 10,000 units. The intervention is integrated in the city center to avoid creating a socially segregated society. Throughout the process it is important to take into consideration the layout of existing neighborhoods, the city’s economic situation, and the local climate.

Students are required to consider economic, cultural, environmental, and social factors to design a suitable house with available resources. The project gives students an insight into some of the important challenges facing the developing world.

The world today is interrelated and complex, and the built environment at any scale cannot ignore its role as the critical hub of emergent issues. The increased frequency of crisis is exacerbated by the interdependence of a multitude of issues, and we as the custodians of the environment cannot ignore the need to understand this relationship. The Global Redesign Project (Toshiko Mori) extends our skillset as designers of the built environment to outside our immediate expertise. It has become fashionable to use the word “architecture” to give certain credibility to the stability of complex systems within policy, economics, and finance. The true capacity of architecture enables the embrace of complexity within its inclusive system of integration, its cross-disciplinary structure, its communication of feedback, and its collaborative work model dependent on the coexistence of multiple stakeholders. 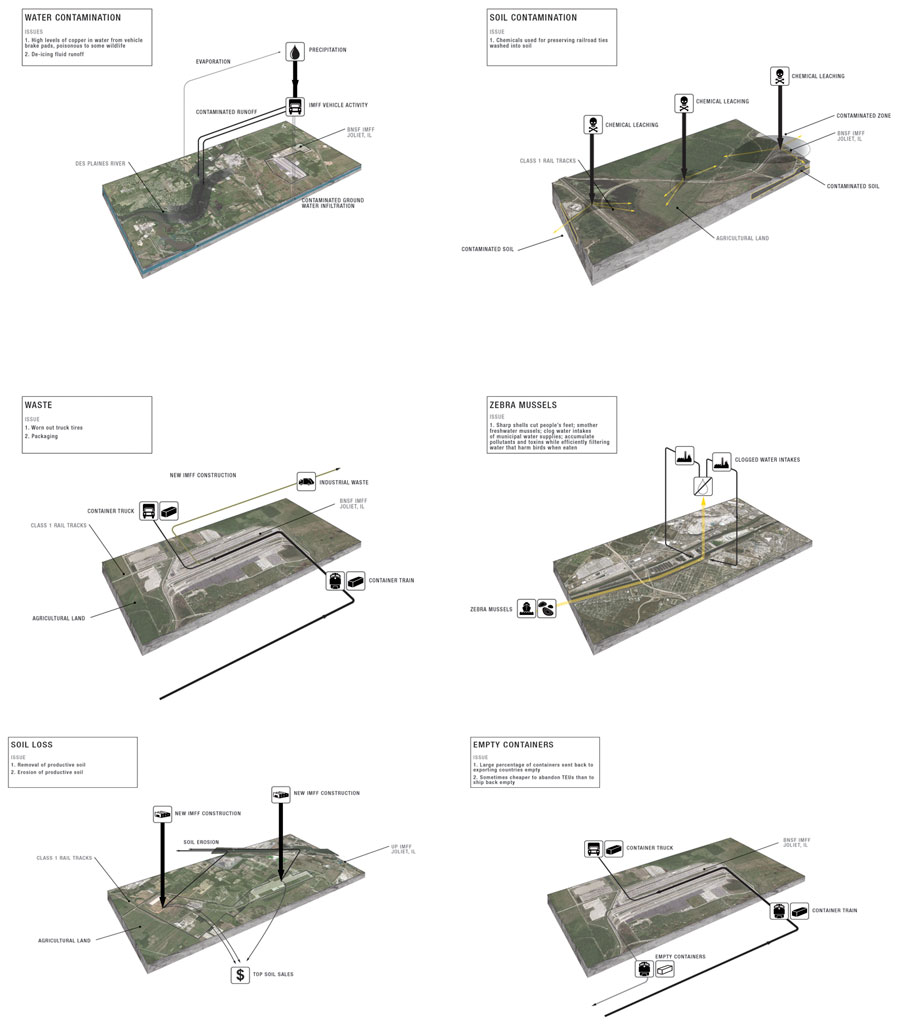 Through proposing a metabolic prototype for harnessing externalities produced by networks of containerized transport, this rescale project situates logistical networks historically and spatially within specific material and environmental contexts in the United States. These opportunistic metabolic strategies aim to alleviate some of the hidden costs associated with the movement of containers by ship, train, and truck. The Chicago Metropolitan Area, where six of North America’s Class I railroads intersect, is used as a case study. 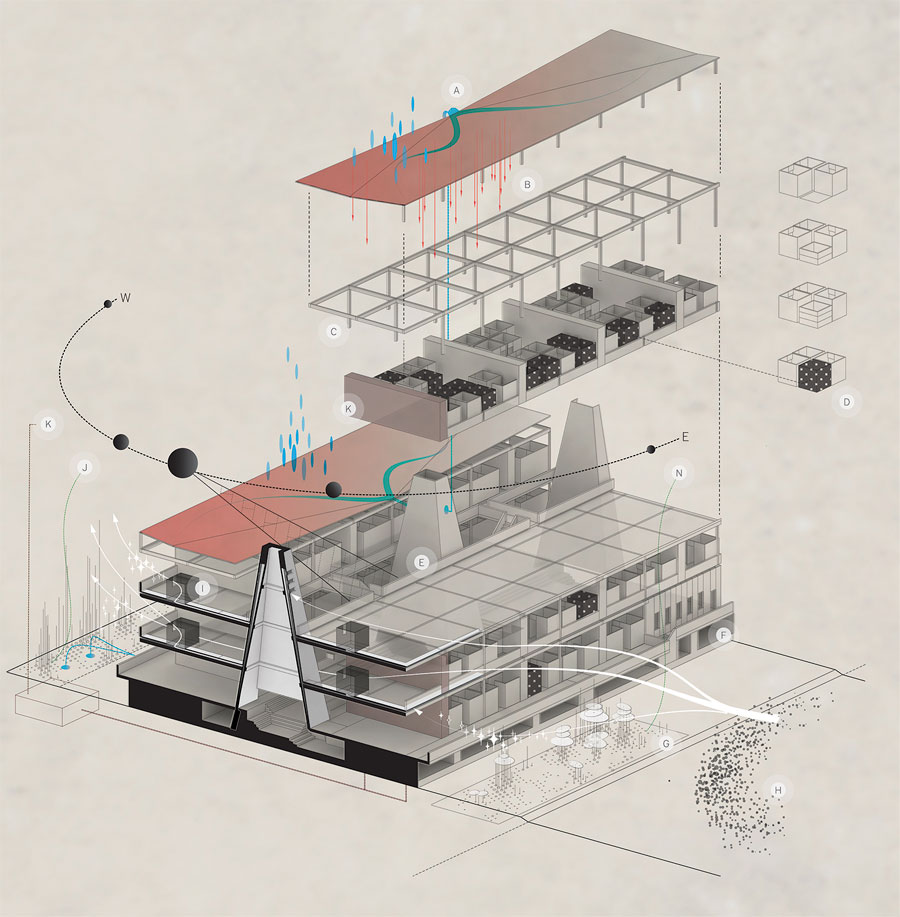 As affordable housing demand increases, a system of agricultural “silos” shift function and begin operating as “collectives”—infrastructural chimneys—around which housing is constructed. While the “collectives” act as an infrastructural seed, the housing they support rings preserved agricultural land within Ouagadougou’s greenbelt. This insertion of a new housing typology, where human agency can assist with the protection and maintenance of public infrastructure, addresses Ouagadougou’s growth at an urban level. While the local government would initially fund construction of the “collectives,” standard methods of taxation on informal economic activity would replace government assistance. Collaborative construction, locally sourced materials, and sweat equity, all familiar to rural-to-urban migrants, supports housing construction. Existing housing settlements are connected to and through the site by preserving and intensifying the well-worn paths in place, becoming evidence of the human agency of the place. 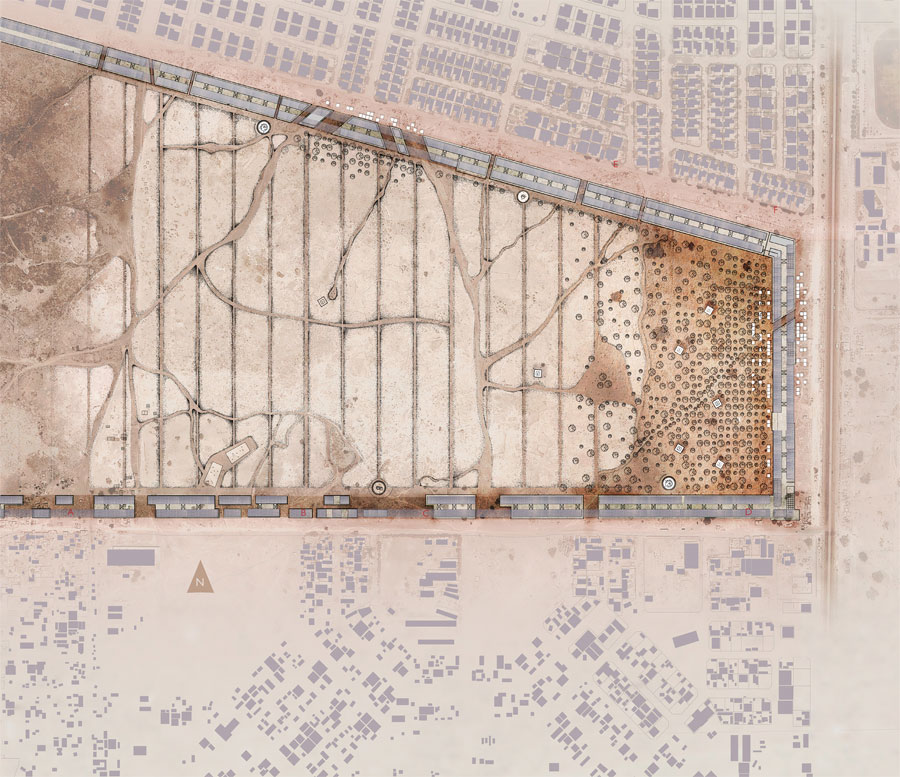 The city is a complicated technology that needs to be understood on its own terms. Teju Cole. 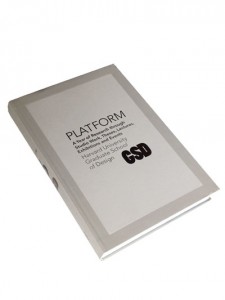 « The Production of Reality
The Biggest Risk for Africa »