On Tents and Caves

“The first space for living was the cave. The first house was the hollow mound of earth. To build meant: to gather and layer building material [and] mass, around voids for air [and] living [and] space . …
The technique of architect and sculptor was similar. …
The architectural design concerns itself with ‘space’ as its raw material and with articulated room as its product . …
The architect has finally discovered the medium of his art: SPACE.” [1]

Written in Vienna in 1912, a place and time marked by some of the most radical cultural shifts of the last century, Rudolf M. Schindler’s “Moderne Architektur: ein Programm” describes the origins of architecture and offers two directives for the architecture of that moment: first, that architecture must concern itself not with the object, but with space; and second, that architecture is to be from and of the earth.

Ten years later, Schindler built his own, seminal house in Los Angeles. He had moved to America to work with Frank Lloyd Wright, and had overseen Wright’s studio during the master’s long voyages to Japan. He was in Los Angeles supervising the construction of Wright’s first and most significant commission there, the Hollyhock House, built for the oil heiress Aline Barnsdall. He had also traveled throughout the American Southwest, reporting to Richard Neutra back in Vienna that “the only buildings that testify to any true feeling of the earth from which they spring are the ancient adobe buildings” there.[2] The house he would design for himself, constructed between February and June 1922, is a building as radical today as it was almost a century ago. “The basic idea was to give each person his own room—instead of the usual distribution,” he explained in a letter to his parents-in-law in 1921.[3] He elaborated on this atypical arrangement in an article in the journal T-Square, published in 1932, in which he describes the house as “a cooperative dwelling for two young couples … [where] rooms for specialized purposes [have] been abandoned.” “Instead,” he continues, “each person receives a large private studio; each couple a common entrance hall and bath. Open porches on the roof are used for sleeping. An enclosed patio for each couple, with an out-of-door fireplace, serves the purposes of an ordinary living room. … One kitchen is planned for both couples.”[4] Architecturally, Schindler combines in his house the idea of the “cave” (the concrete floors and walls on three sides of the spaces) with the idea of the “tent” (the delicate wood, glass, and canvas enclosures of the fourth walls), anticipating two distinct positions in the architecture of the coming century. 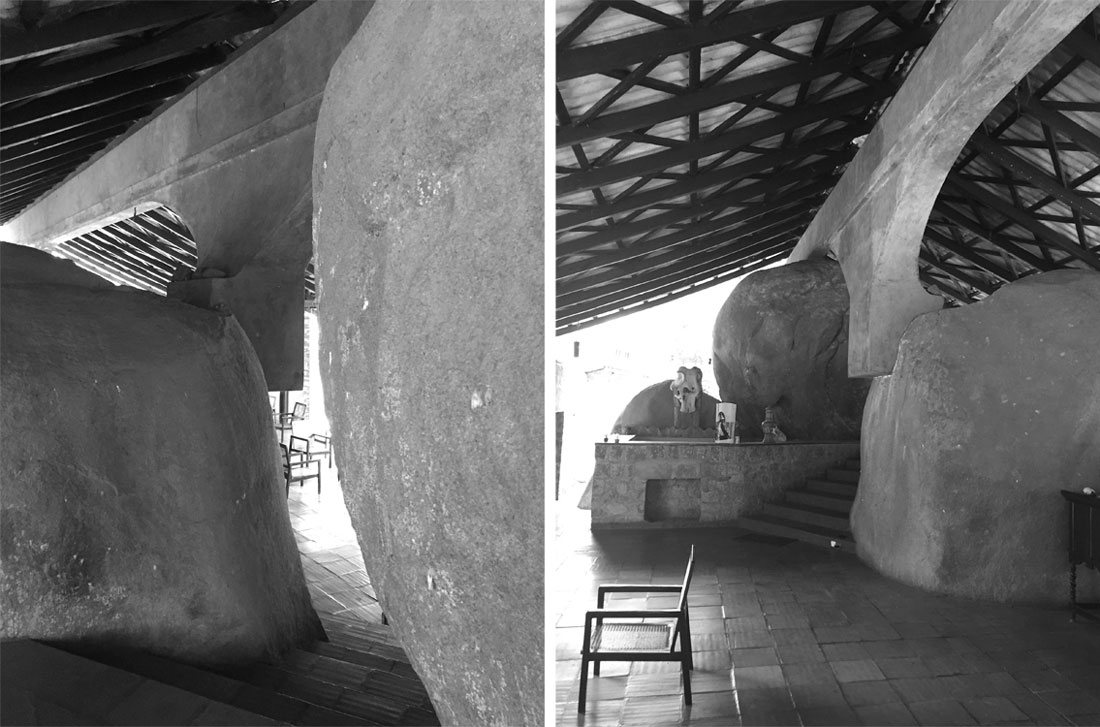 [1] The original manifesto is held in the R. M. Schindler papers, Architecture & Design Collection, Art, Design & Architecture Museum, University of California, Santa Barbara. Author’s translation. Schindler’s 1912 text underwent many changes. Schindler himself made notes on the text for a series of lectures he gave in Chicago in 1916 and Los Angeles in 1921, and he translated it to English around 1932, making it more technical, more prosaic, and less poetic than the original (the mound, for example, is no longer of “earth”—Erde—but of “adobe”). Over the years, this 1932 English version became known as the Schindler manifesto. According to Judith Sheine, “Schindler’s 1932 translation was made in light of his later experiences. His attack on ‘functionalism’ and focus on ‘space’ were emphasized in his 1934 article ‘Space Architecture,’ in which he contrasts his work with that of the International Stylist branch of modernism.” Judith Sheine, letter to the author, 2014. [2] “Die einzigen Bauten, die von wirklichem Gefühl für den Boden der sie trägt zeugen, sind die alten Lehmziegelbauten (der ersten Einwanderer).” R. M. Schindler, letter to Richard Neutra, December 1920 or January 1921. Translated in August Sarnitz, R. M. Schindler, Architekt, 1887–1953 (Vienna: Christian Brandstätter Verlag & Edition, 1986), 204. [3] R. M. Schindler, letter to Mr. and Mrs. Edmund J. Gibling, November 26, 1921, quoted in Kathryn Smith, Schindler House (Santa Monica, CA: Hennessey + Ingalls, 2010), 19. [4] R. M. Schindler, “A Cooperative Dwelling,” T-Square 2 (February 1932), quoted in Robert Sweeney and Judith Sheine, Schindler, Kings Road, and Southern California Modernism (Berkeley: University of California Press, 2012), 15. [5] For example, a 1950 Architectural Forum article describing the house is titled “Life in a Chinese Kite.” [6] The Polontalawa bungalow was done in collaboration with the Danish architect Ulrik Plesner, a longtime associate. [7] The Polontalawa bungalow was published for the first time in February 1966 in the Architectural Review (“Ceylon – Seven New Buildings”), and again in 1965 in the Danish magazine Arkitekten (“Arbejder pa Ceylon”). Further, in 1967, the Hawaii Chapter of the American Institute of Architects awarded Bawa the Pan Pacific Citation; at the time, Lautner was working on various, mostly unbuilt projects for the Hilo Campus of the University of Hawaii. [8] Albert Frey, interview by Jennifer Golub, in Jennifer Golub, Albert Frey / Houses 1+2 (New York: Princeton Architectural Press, 1998), 78–79.

Being the Mountain | Essay | No Density | Territory and mobility | Urban Paradigms