The main aim of Mas d’Enric Penitentiary is to bring the prison back into architectural debate, in a broad and critical sense, while steering clear of dominant technocratic conceptions. As has been the case with hospitals or schools, the prison is a reality that needs to be visualized and addressed so that it can be included in the broadest possible architectural and social debate, allowing for it to evolve in keeping with society’s demands. 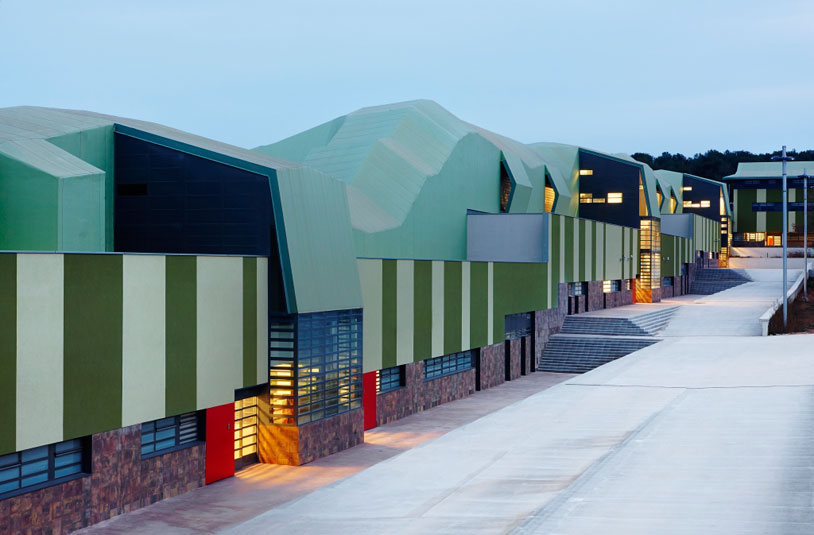 We believe that a penitentiary needs to be a living space, where architecture contributes to improving the difficult experience of confinement by building spaces that lend themselves to appropriation, which promote a certain feeling of belonging.

While taking into account the specificities of the functional program as well as the internal and external security criteria, the design for Mas d’Enric penitentiary proposes a humanized solution that is economically sustainable and integrated into the landscape, in order to encourage the penitentiary’s central aim: the reinsertion of inmates.

The programmatic demands make it necessary for many of the buildings to open onto controlled, courtyard-like spaces, by default creating a series of volumes with a high proportion of blank façades. Reasoning based on spatial, environmental, functional, economic and energetic criteria suggests abandoning the classic solutions based on pavilions in favor of adapting a mat-building typology: an expansive, interconnected and compact building that creates its own condition of exteriority based on a pattern of different-scaled courtyards. 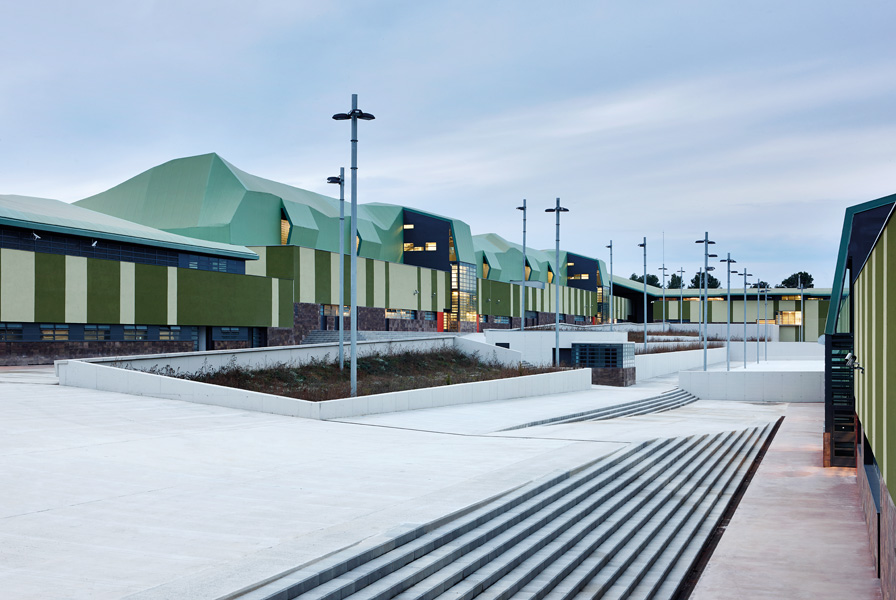 Positing the penitentiary as a large continuous building, as opposed to a system of independent pavilions, provides for the following advantages: avoiding residual spaces between buildings, facilitating better security control which allows for freer use of the interior spaces; significantly improving the quality of the outdoor spaces within the enclosure by combining all of the interstitial spaces in favor of a large-scale interior promenade with an urban feel; economizing by sharing the built perimeter which optimizes insulation and construction costs; and treating the entire complex as a cohesive building unit.

The design groups together the buildings in a continuum defined by the interior promenade. The whole is covered by a continuous roof that allows for distributing building services; it negotiates the different building heights, establishes relationships with the surrounding landscape and reinforces the idea of a continuous building. The limit of the security perimeter is markedly emphatic, rectangular and compact, surrounded by the security ring road and redundant security systems, which are not visible from the interior of the penitentiary. The security perimeter makes it possible for the different buildings within the enclosure to be organized in a much freer and open plan, allowing for spaces that can be appropriated, where people can interact, by laying out a large-scale promenade that, surprisingly, introduces qualities of exterior space into the penitentiary enclosure. 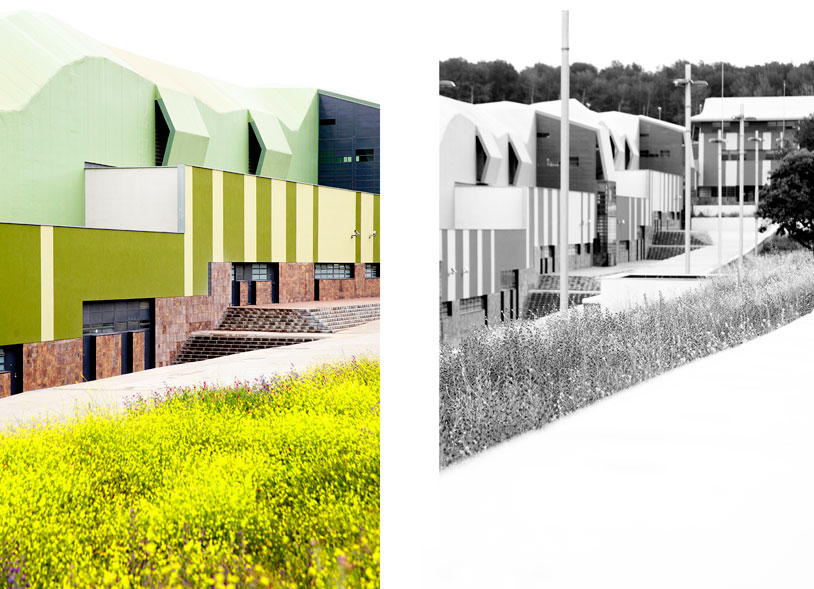 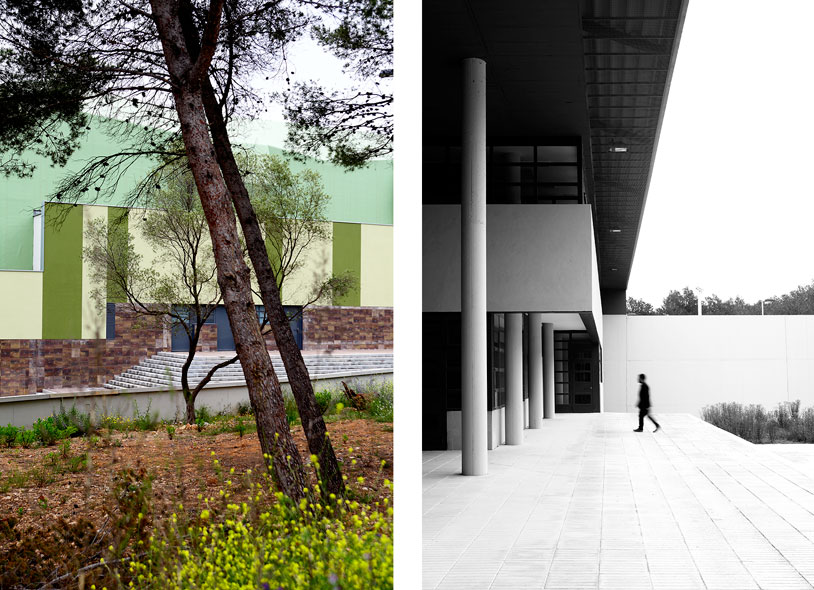 Adaptation to the Surroundings

The rectangle defined by the security perimeter is turned 45º with respect to the north in order to allow for optimum solar orientation on all of the façades, and it is situated in the most deteriorated area of the site, affected by former military uses and recent illegal dumping. This area is also the flattest and has the sparsest vegetation, minimizing the effect of the new penitentiary on existing woodlands, which are preserved and cared for as an environment for the complex. The woods protect the penitentiary from being seen from the outside, and are visible from the inside, which represents a significant improvement in the quality of the inmates’ living spaces.

Aside from the surrounding woods, three green areas are incorporated into the interior promenade: the woodland, the vegetable garden and the meadow. Woodland: A group of large green oaks and old pines are preserved in the highest section. Vegetable garden: The central section includes a plot of land for use by inmates as a productive garden, as a part of the reeducation programs. Meadow: In the lower section of the promenade, an embankment adapted to the natural topography, where wild grasses are left to grow, serves as a division between the playing field and the other areas. 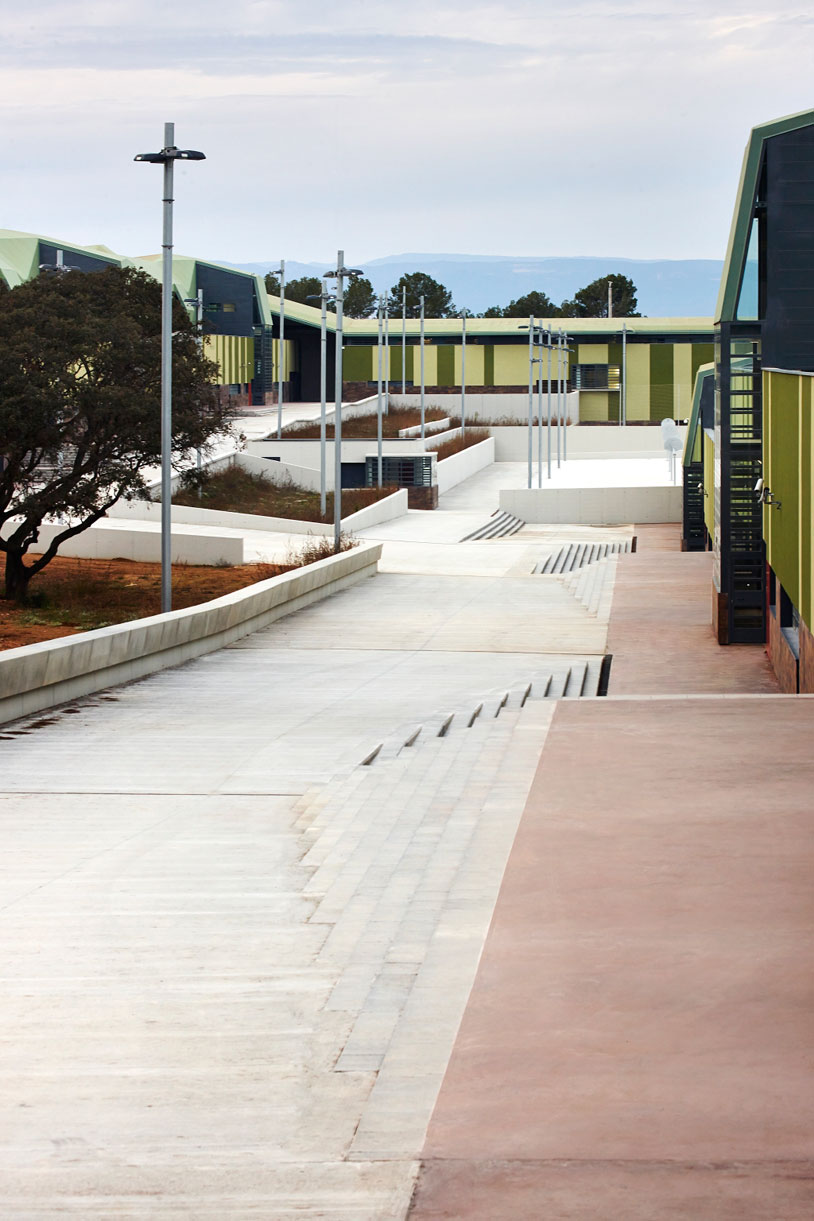 In addition to the large green areas in the interior promenade, each of the courtyards in the residential blocks has space for a garden, which inmates will be responsible for tending.

The principle vehicle access is resolved by widening the existing road, which allows for easy connection with the most important urban centers, while it avoids passing through residential areas. Beyond the security gate, visitor traffic is kept entirely separate from other types: staff, police force, suppliers and service providers.

The ground level adapts to the existing topography. The entrance is situated at the highest point and the different buildings extend in a continuum that follows the natural slope of the terrain. All efforts were made to minimize the earthworks (which were nonetheless substantial) and excavated earth was used where infill was needed, so that a large part of the earth remained on site.

The conditioning factors for minimizing the environmental impact suggested partially burying certain areas of the center below the natural level of the terrain: for example, the entrance and the western corner of the enclosure, where the topography falls quickly toward nearby urbanized areas.

Scale of the Intervention

The Penitentiary intervention occupies some 15 Ha (more than 37 acres) – an area equivalent in size to the Roman city of Barcino, or eight city blocks in Barcelona’s Eixample. Given the scope of the operation and its enclosed character, working with nested scales is a must.

Three design strategies are proposed in conjunction with the different intervention scales:

– Large scale A strategy that adapts the design to the surroundings

The operation is divided into three large sections: (1) the interior area of the penitentiary enclosure as defined by the security perimeter (2) the exterior area and the entrances, (3) the surrounding area.

Area (1), which includes all of the buildings for use by inmates, is conceived of as a large mat-building, adapted to the natural topography. Its compact organization incorporates courtyards and large exterior spaces, and it is fitted with a continuous roof.

Area (2), which includes the access road, the staff and visitor parking lots, the entrance areas and the administrative buildings, is structured into a series of terraces. Parallel to the natural slope, they provide a solution for vehicle access routes and organize the building site.

Area (3) consists of the strip defined between the perimeter security road and the limits of public property and sets up a buffer between the penitentiary and the surroundings, in order to allow for the topographical movements, the landscaping and other interventions that are intended to improve the penitentiary’s relationship with the surrounding areas and to minimize its impact.

The aim is to create a cohesive (but not uniform) treatment for the penitentiary as a whole, so that particular architectural elements can be used to address specific local conditions within a more general logic. One example is what we have called the floating wall, which runs along the façades looking onto the interior promenade without ever coming into contact with the ground or the roof. Overall, it appears as a common element because of its chromatic treatment, based on a cyclical pattern, whereas on a local level it adapts to the specific conditions at each point, while maintaining the general logic.

The functional needs for security and maintenance limit the choice of materials for both the interior and exterior finishes. By adding criteria based on economies of scale, we propose a limited number of materials for finishes which fulfill the following conditions: respecting the security demands, minimizing maintenance, and using versatile materials that can be arranged in a number of different ways. 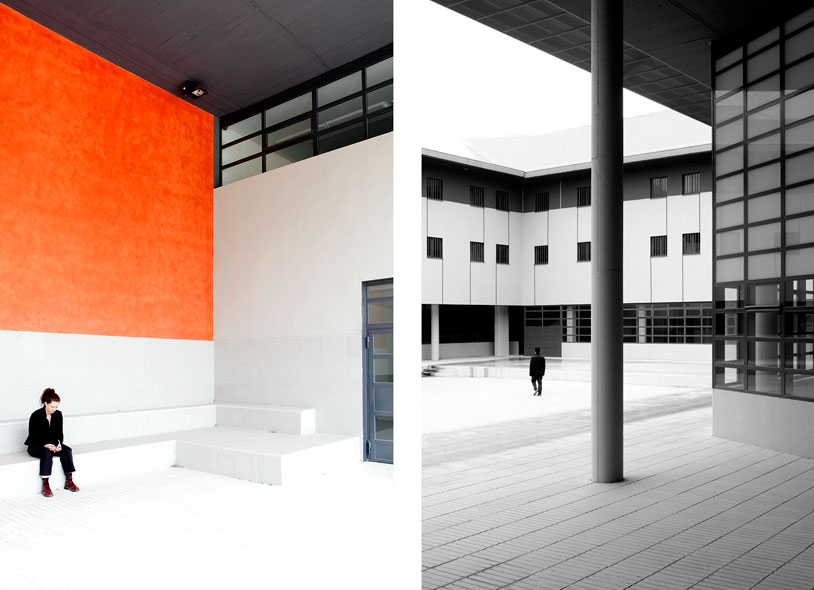 On all scales, the volumes of the penitentiary enclosures are broken up, with the aim of reinforcing the feeling of openness and allowing for the space to be appropriated by both inmates and prison staff. Inside the security perimeter, where spaces have to be closed in order to meet the programmatic demands, the enclosure is never monumentalized. On the contrary, the volumes are systematically broken up on different scales.

On a large scale, the residential blocks are grouped into two separate sections, set up diagonally in plan to encourage diagonal sightlines and movements across the interior promenade. In addition, the two buildings with the most positive connotations, related to contact with the outside world (Visits and the Cultural and Sports Facilities), are located on both extremes of the interior enclosure, so that they qualify and activate the entire interior promenade. These two design decisions create diagonal lines in the common interior spaces, enriching them enormously and allowing for transforming the interior promenade into a living space, instead of a mere open-air hallway.

On an intermediate scale, the four façades that define the courtyards inside the Residential Blocks respond to the aim of avoiding the feeling of an oppressively enclosed space. To that end, the space is again oriented along the diagonal, by treating the façades like two L-shapes oriented head to toe. This creates a visual line of flight and a dynamic perception of the courtyard. The two cell-block façades are differentiated from the façade associated with common service areas and from the perimeter wall by their volume, their material treatment and their color palette. The strategy of introducing diagonal lines into the courtyards is reinforced by the uses located on the ground floor and the mezzanine, and by the care taken to generate a number of spaces that can be appropriated so that the Residential Block becomes the natural center of the inmates’ living environment.

On a small scale, many of the interior spaces –lounges, auditoriums, classrooms, offices, etc.– use the same strategy of creating perceptive openness within the enclosures, using tactics like locating openings in front of one another and using differentiated material treatments so that, even in small spaces there is never an over-determination of the enclosures and diagonal sightlines are emphasized.

All of the buildings are located within the rectangle defined by the security perimeter, with the exception of those in the exterior area, i.e., Reception and Access, Security and Administration, and the centralized building services which are situated outside the enclosure and organize the entrance area.

The two exterior buildings follow the logic of agricultural terraces, which are an integral part of the surrounding landscape; this logic is also used to direct vehicle access past the exterior security checkpoint toward the staff and visitor parking lots.

The rest of the program is located within the large rectangle defined by the security perimeter. The interior area includes the following buildings: Monitoring, Visits and Admission; nine Residential Blocks (one of which is destined for youth offenders and one for women); Solitary Confinement Unit; Infirmary; Cultural Facilities; Sorts Facilities; Workshops; and Kitchen, Laundry and Storage. 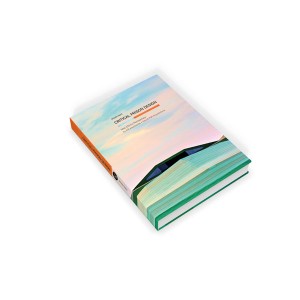