Koper Central Park: A New Stage in the Development of the Town’s Infrastructure

New Koper Urban Park is set between Piranska Road and the Semedela promenade, and between the canal and the area just beyond the city market. Piranska Road represents a new stage in the development of the town’s infrastructure, while the promenade is one of the more important features of the town having once acted as the link between the city on the then-island and the mainland. As such, it counts among the characteristic elements in the panorama of Koper. The connection ran between the sea and the salt ponds. As the city developed during the past decades, the former salt-pond area was gradually filled in. 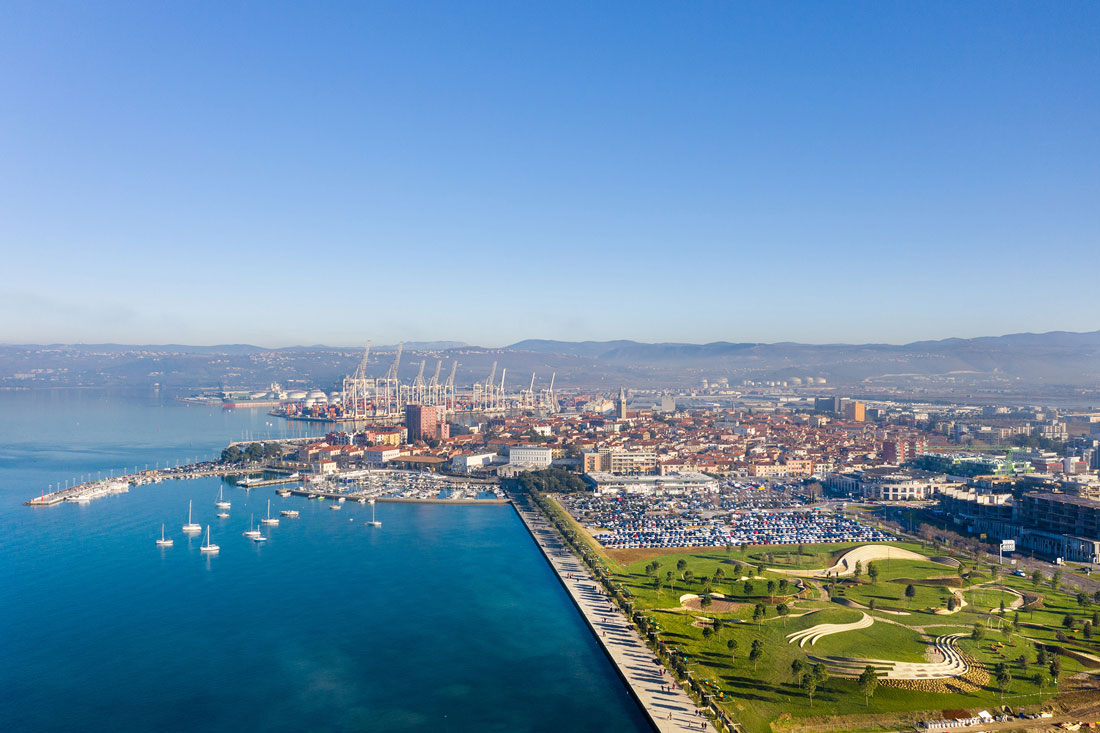 The land thus recovered represented a major development potential for the town. Nowadays, these surfaces are partially built, but there are still extensive unoccupied surfaces, including the area under consideration. The key characteristic of the area is the immediate connection with the promenade and the sea, which should be recognised as a significant spatial quality. The area is partially occupied by a large car park behind the city market. In the broader context, the area represents the first contact with the sea for the visitors to the Slovene coast, and it represents the starting point of the riviera between the towns of Koper and Izola. Only a comprehensive and coordinated treatment of the entire belt along the promenade will be able to visually and functionally connect the two currently separate parts of the town into a logical whole. 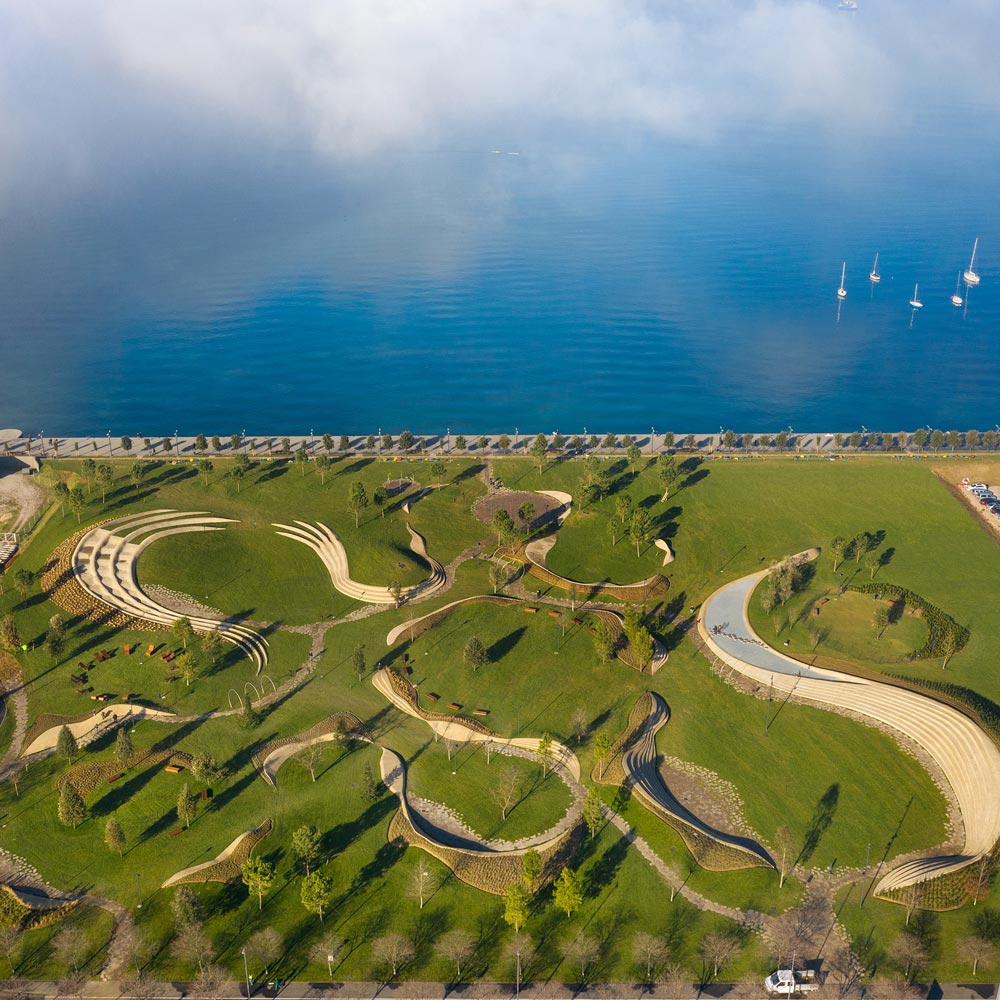 This area needs an intervention which will bolster the leisure activities of Koper’s inhabitants and further connect the old part of the city with the suburbs of Semedela, Olmo and Markovec, which are strewn across the slopes of Markov Hill. 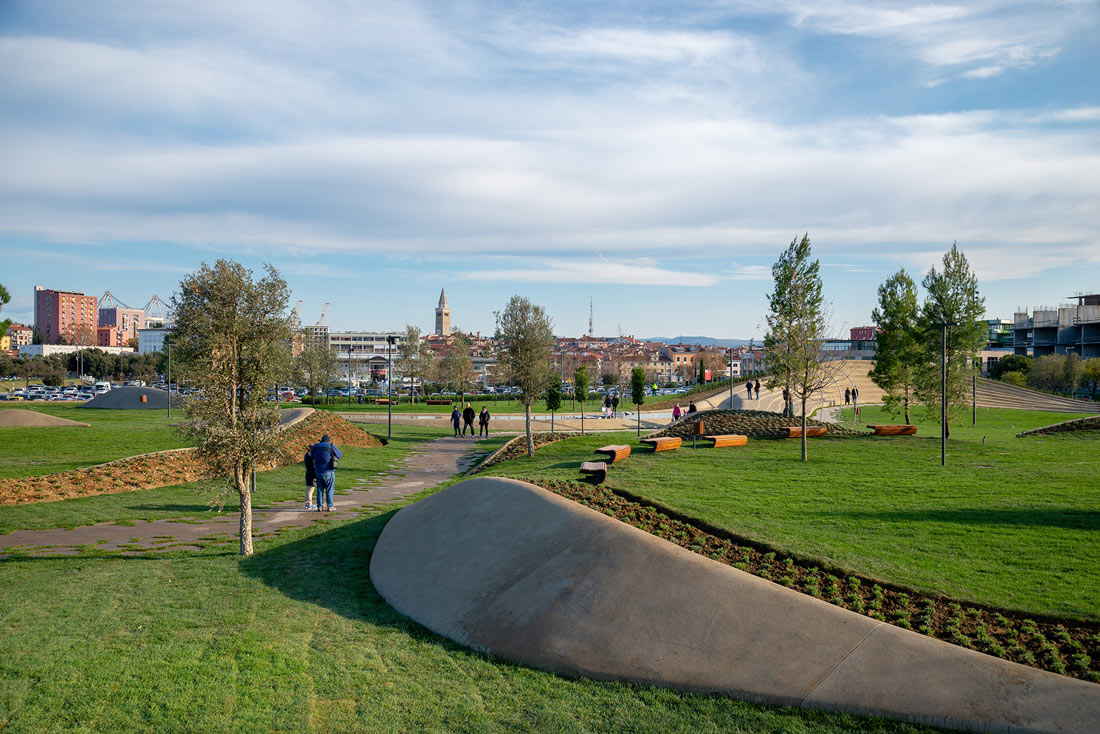 In line with the prognosis that the sea by the promenade will become increasingly cleaner, it is feasible that a new city beach may appear along the promenade. Successful similar examples show that a city beach is not only an area where people can take a dip in the sea; city beaches can also become the most important socialising space. Since the densely developed old town core does not allow for a sufficient number of large open spaces and constrains their size, and since we need to consider that convivial bustle, concerts, and late-night events disturb residents in the immediate vicinity, the placement of such programme in the area under consideration is all the more suitable. The heterogenous forms of development which characterise present-day Koper (the old town, the residential suburbs, the commercial and service development belt in the former salt-pond area) and the inescapable presence of all the infrastructure required by a modern seaport call for a space with an inwardly oriented form enabling a visual escape, but whose scale and outward expressiveness can rise above the heterogeneity of development around it and tie it all together. 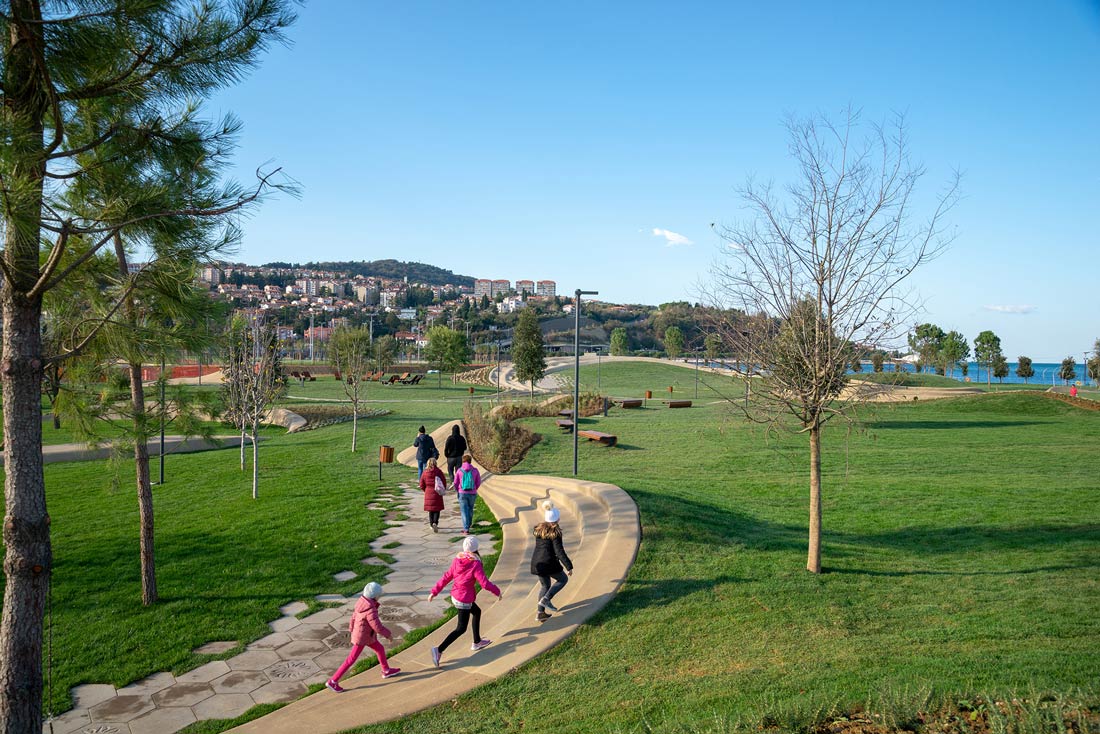 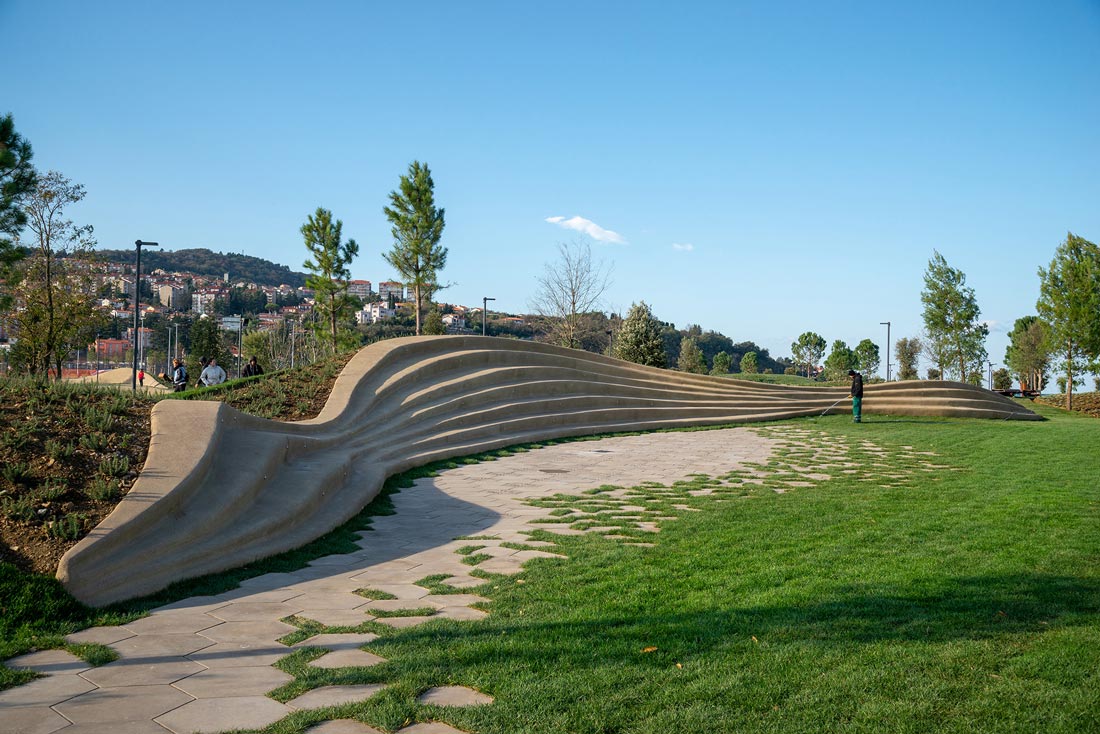 The area of the new city park covers a sizeable portion of the wider site, and its design can thus serve as a prototype for further interventions. The new intervention offers a uniform and attractive appearance, and with its intensive hinterland greenery it drowns out the heterogeneity of the surrounding built structures. The fusing of the elements of a city beach and a contemporary city park encourages the area’s residents and visitors to use the space in different ways. 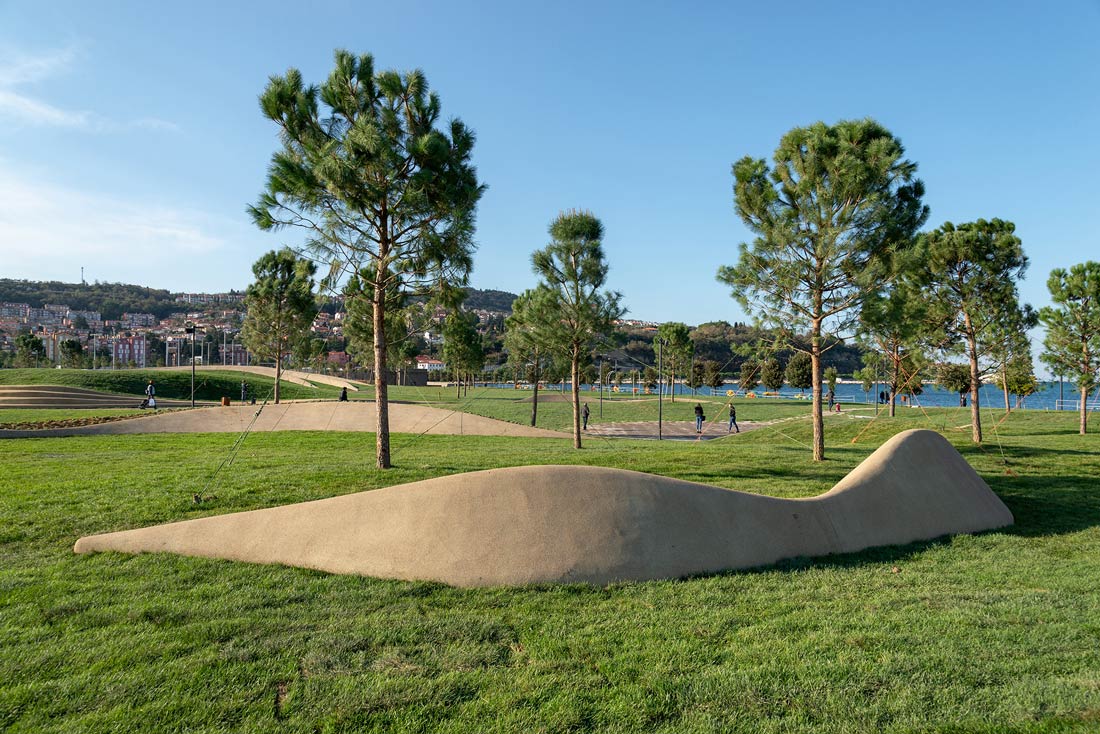 The basic building blocks of the new city park are monolithic, undulating urban elements. Their controlled placement in the space, in combination with a pronounced topography of the green surfaces, softly divides the whole of the park’s surface into individual introverted programme isles. The design of the individual urban elements consistently follows the different programmes. In some places, they are taller and act as a shelter from views and the noisy surroundings; elsewhere, they are lower and allow for an unimpeded contact between programme zones. The organically designed urban elements form stands for viewers, an obstacle course for children, climbing walls, a backdrop to a seaside bar, a concert venue, a children’s playground, a reading area, and more. Due to the proximity of the sea, the programme zones are appointed with numerous water elements. A pond, ground sprinklers, a geyser, parabolic water jets, cascades and a water platform in combination with the variegated urban elements encourage an active use of the space and an expansion of the future beach towards the interior of the park. 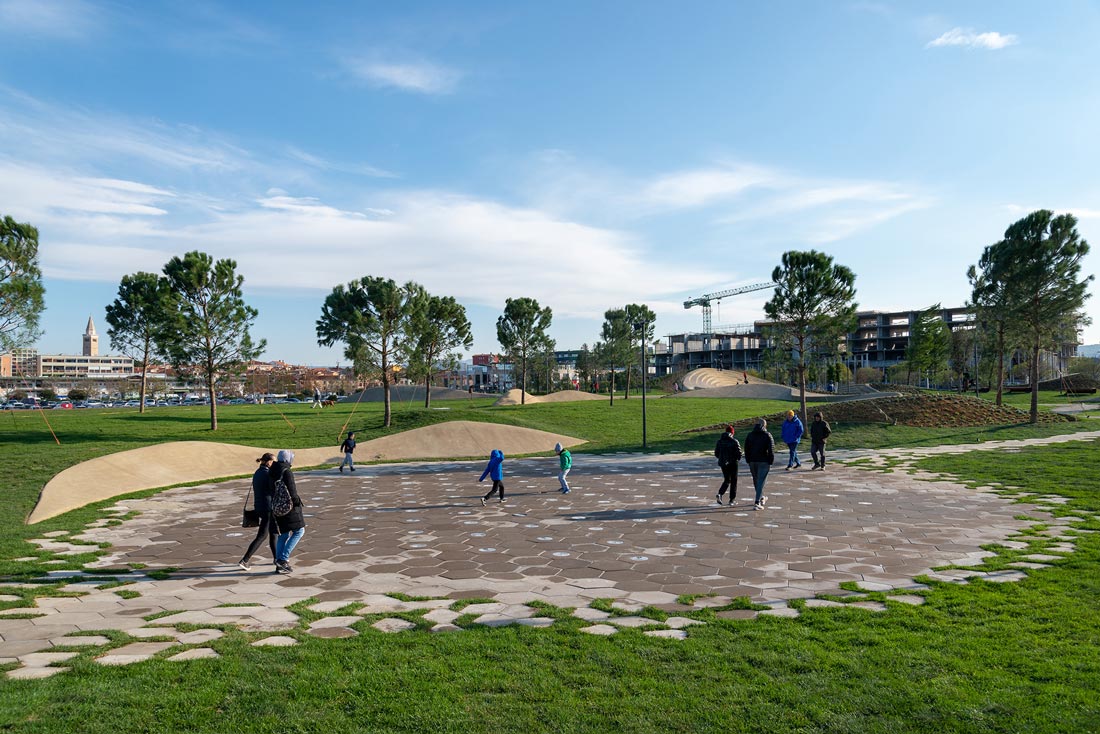 The planted portion of the landscape design is laid out only with indigenous Mediterranean vegetation. The strategically arranged tall growth complements the existing tree lanes on both edges of the park, gives shade to the individual programme zones, and offers the park area additional protection from the impacts of the surroundings. In order to encourage as much diversity in the use of its space, the new city park does not feature traditionally designed footpaths. Interlocking paving with a free arrangement of grass-coloured tiles is limited to the access points and the sections of the park where a more intensive use of the ground is expected. In this way, the visitors define their own paths and their own ways of using the space. In case new content is added to the park, or if obvious desire lines are formed, which is very difficult to predict initially, this manner of paving enables an easy rearrangement of the compacted surfaces at a later time. 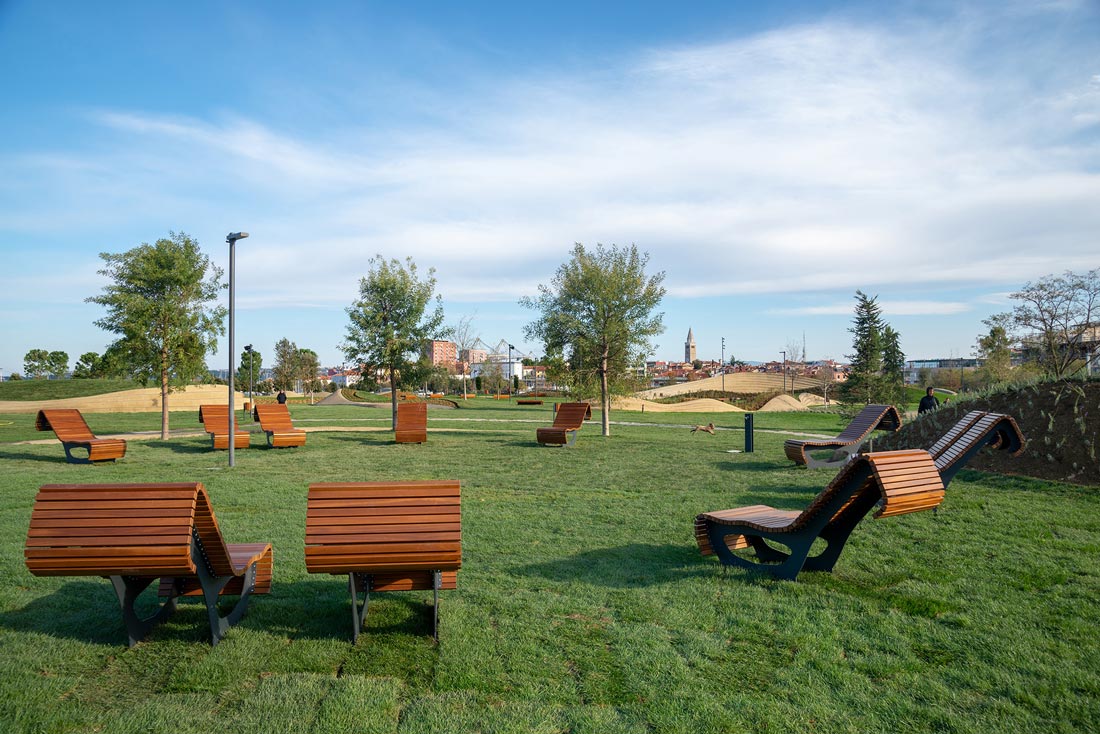 The innovative layout of the city park is a great new asset for the citizens of Koper, since it enables the development of programmes which the city cannot offer at present. The new park is an attraction and, with its unique form and manner of spatial organisation, it transcends a merely functional park regulation. It represents a prototype for further designing of the wider area, as well as motivation for development-oriented attitudes in regard to other sections of the Slovene seacoast currently in a state of decay. 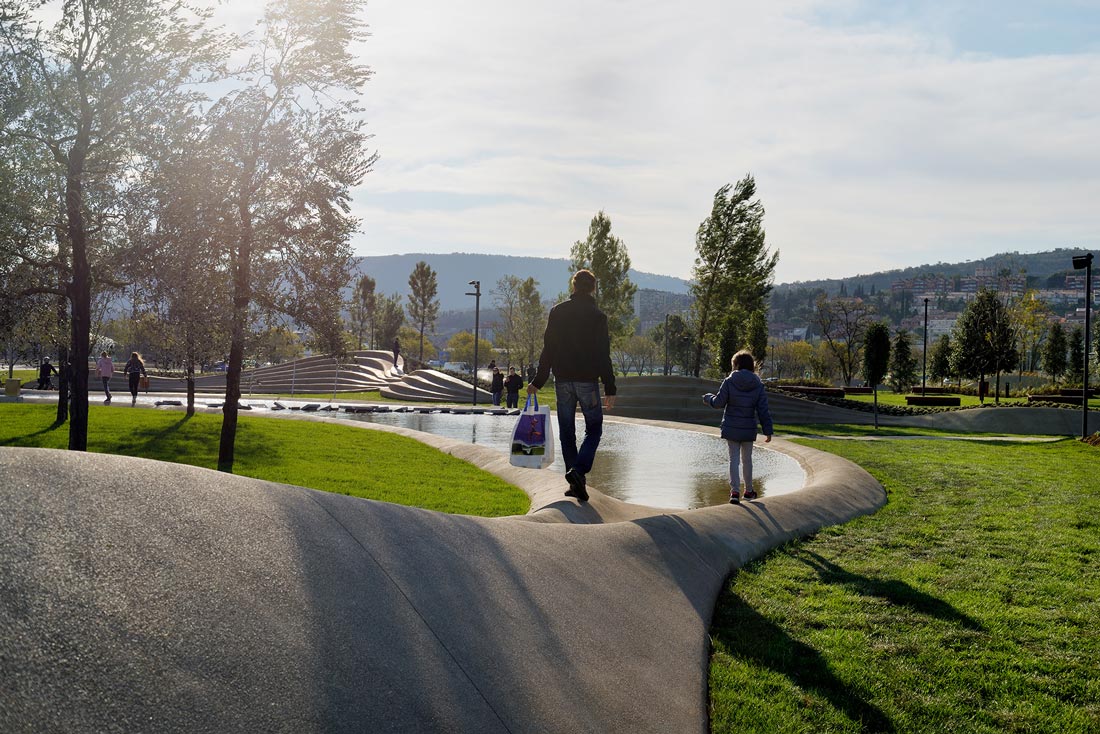 « AI and Designers: A Search for Solutions
Diversity of Nature: Mapping Landscapes and Seascapes »