This year marks a new direction for the MoMA/PS1 Young Architects Program (YAP), and it shows in Jenny Sabin Studio’s Lumen, the series’ 18th annual installation. After a few years focused on creating awareness of ecological and sustainability issues, the program has taken a slightly different course, as the brief has expanded to include a more rigorous engagement with the popular Warm Up summer music series, now in its 20th season of sweaty, raucous parties in the museum’s courtyard.

Set to open on June 29, the project features a woven canopy that will subtly change color in the daytime, and will glow in the dark and be illuminated at night. The large fabric shade system will address several of the programmatic issues of YAP that have fallen by the wayside in years past, including an integrated lighting system to accompany the musical acts, a misting system to cool visitors, and over 100 seats scattered across the courtyard. These features follow the ethos of YAP much more closely, which, according to its mission statement, is to provide “shade, seating, and water,” in addition to meeting its sustainability goals. To address these newly reinvigorated concerns, the designer set out to create an immersive environment, not an object. 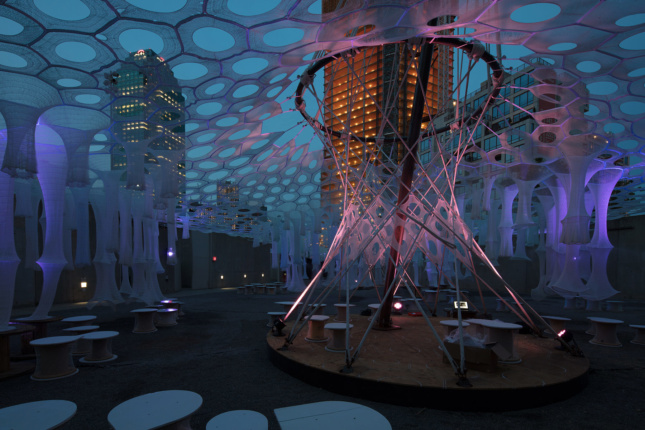