Casa Hualle is a family home located near the town of Pucon in the Araucania region of Chile, approximately 900km south of the capital, Santiago. The area is renowned for its beautiful open countryside, temperate rainforests, lakes and volcanoes that are bounded by the Andes mountains to the east. 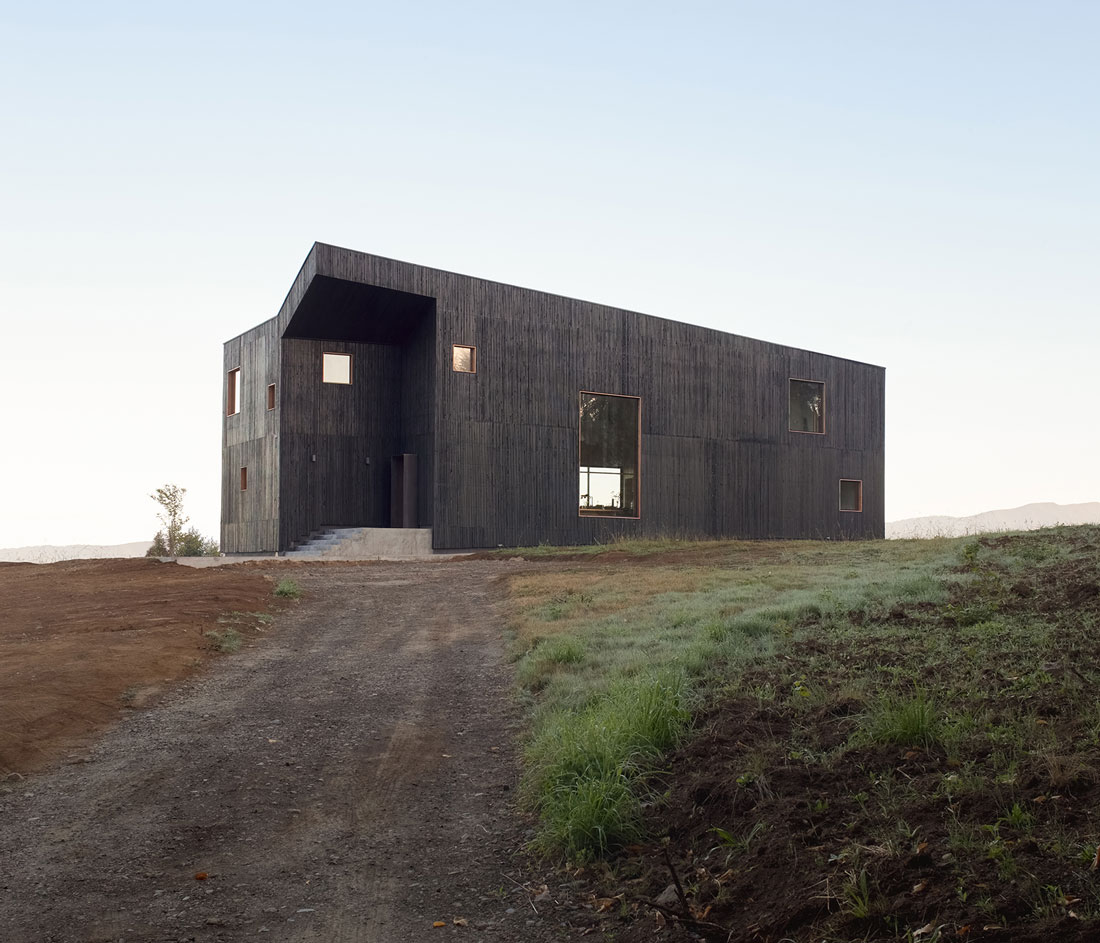 The house is located on a gently sloping site in the rural foothills, with the Villarrica volcano to the south and the lake of the same name to the north. The building is designed to embrace this natural environment and the outstanding views afforded by its privileged setting.

The two-storey building is a single sculptural volume providing 230 m2 of accommodation. Its form and orientation are a response to both the sloping terrain of the land, maximising the views towards the lake and the volcano, and the particular microclimate of the area.

Sitting in solitude on half a hectare of open land, the house is bounded on three sides by pasture farmland. It is accessed from the road through a small forest of mature oak and chestnut trees, which also provide a barrier from passing traffic.

The natural terrain slopes gradually upwards from the southern access point to the midpoint of the property then falls more steeply towards the lake side to the north. The house sits on this central brow of land, taking advantage of the aspect afforded on all sides by this elevated position.

As you approach by road the house appears as a prominent simple black form on the hillside, reminiscent of the traditional large agricultural pitched-roof sheds found in the area. In contrast, when viewed from the main valley to the north, the building nestles and blends into its rural pastoral surrounds. 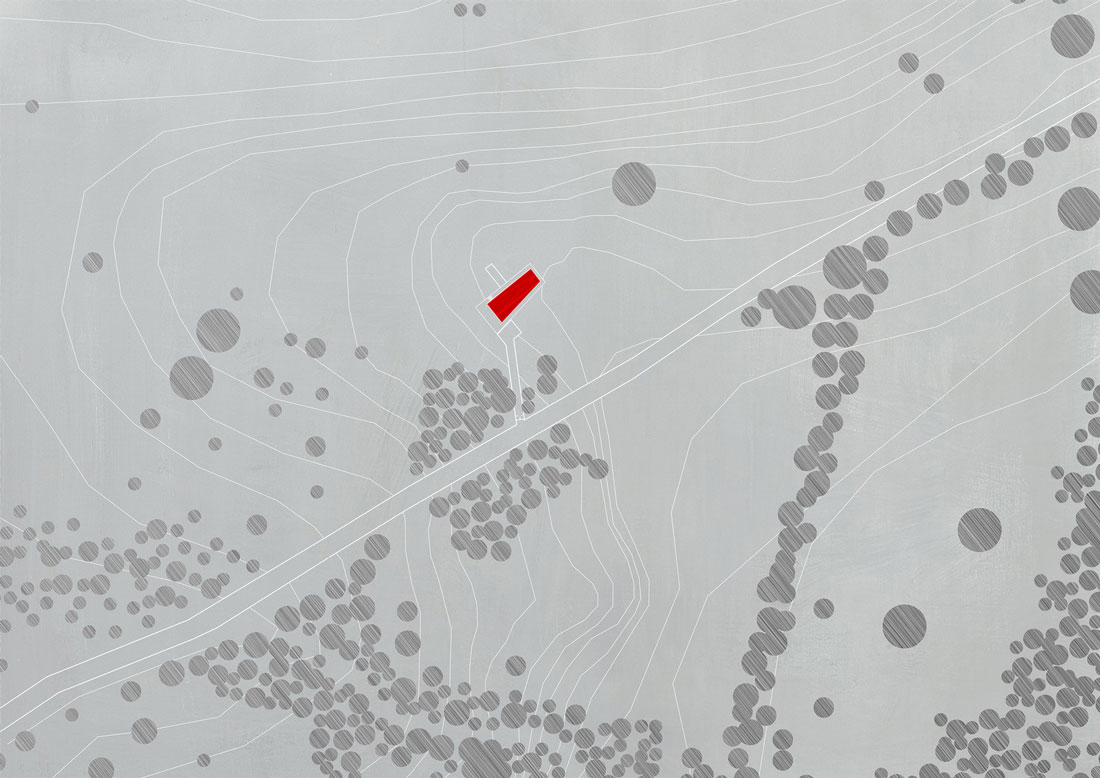 Initially conceived as a simple rectangular volume, the design evolved through a series of manipulations and interventions to create the more sculptural form of the building:

1. The rectangular footprint is extended to align the south side so it is perpendicular to the axial view of the volcano, creating an irregular floor plan and volume.

2. The entrance to the house is emphasised by a large cut-out in the overall volume on the southwest corner. The roof extends above this recess to provide shelter and to further accentuate the entrance. The orientation of the entrance provides further shelter from the prevailing wind and rain, coming predominantly from the north.

3. A recess in the building volume on the north side at the ground floor level creates an overhang to shade the large expanse of glazing from the intensity of the summer sun.

4. The geometry of the roof transforms from a typical pitched gable end on the short northeast façade to a flat roof on the opposite southwest façade. This transition creates a dynamic arrangement of folding roof planes.

The dark external appearance of the house resembles buildings in the area that are typically clad in the black volcanic stone of the region. Diverging from the appearance and physical heaviness of stone, Casa Hualle is clad in vertical dark-stained softwood timber slats over a black waterproof fabric, providing a more ephemeral skin-like quality. Dictated by the internal views toward the outside landscape, the windows vary in size and position, creating a seemingly random composition on the building’s exterior.

The house sits on an external concrete terrace along the entire perimeter. This surface slopes and steps in response to the levels of the natural terrain. A swimming pool projects perpendicular to this plinth on an axis with the views of the volcano and the lake.

In juxtaposition to the dark exterior, the interior walls are lined in pale, almost white, stained plywood. The warmer colour of the natural wood window surrounds, which line the entire depth of the wall, punctuate this interior blank canvas acting as picture frames for the outside views. These carefully composed views of the outside take on a significance similar to paintings on the inside walls of the house.

A polished exposed concrete slab is used throughout the house. The concrete incorporates black volcanic sand and aggregate, providing a dark contrast to the pale walls and ceiling.

Emulating the external geometry, the roof structure is lined in plasterboard on the inside to form the ceiling. Supported solely on the external perimeter walls, and uninterrupted by internal partition walls, this dynamic folding ceiling flows sinuously for the entire length of the building interior. 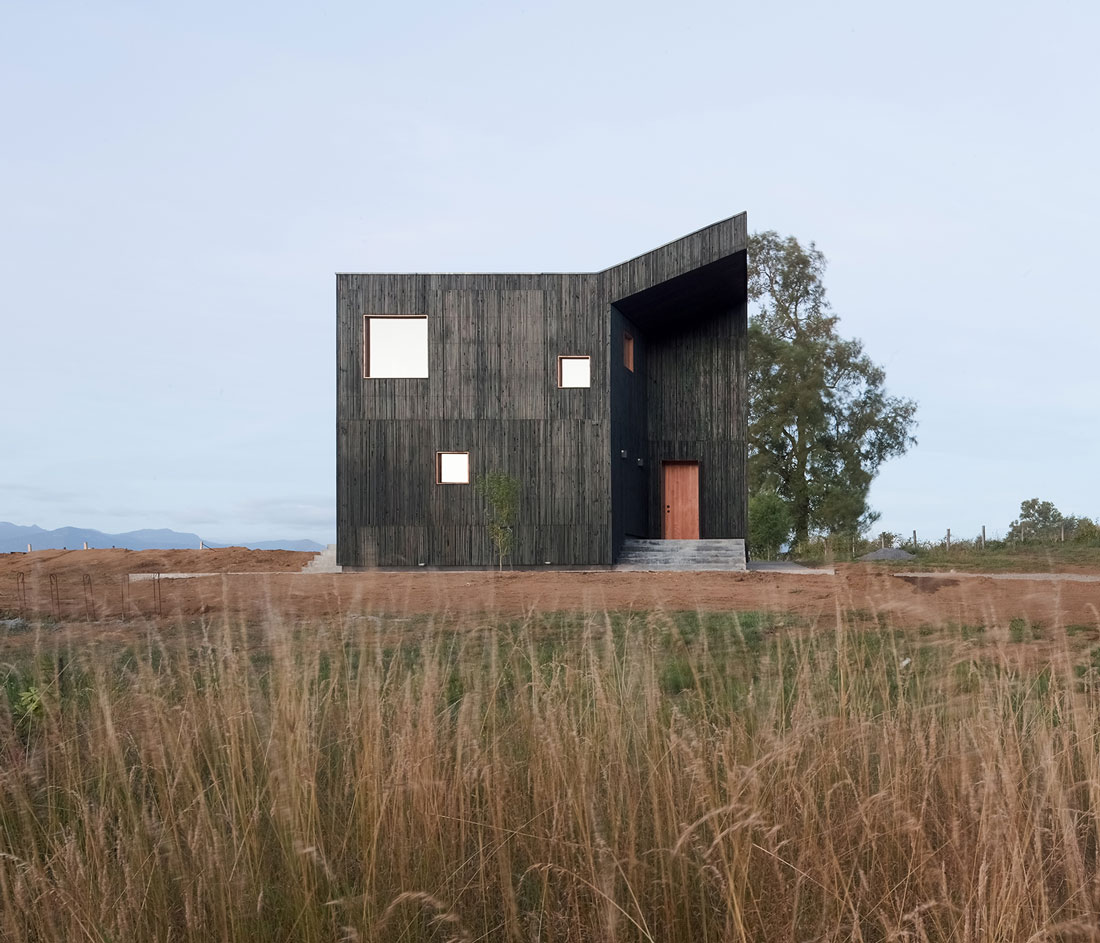 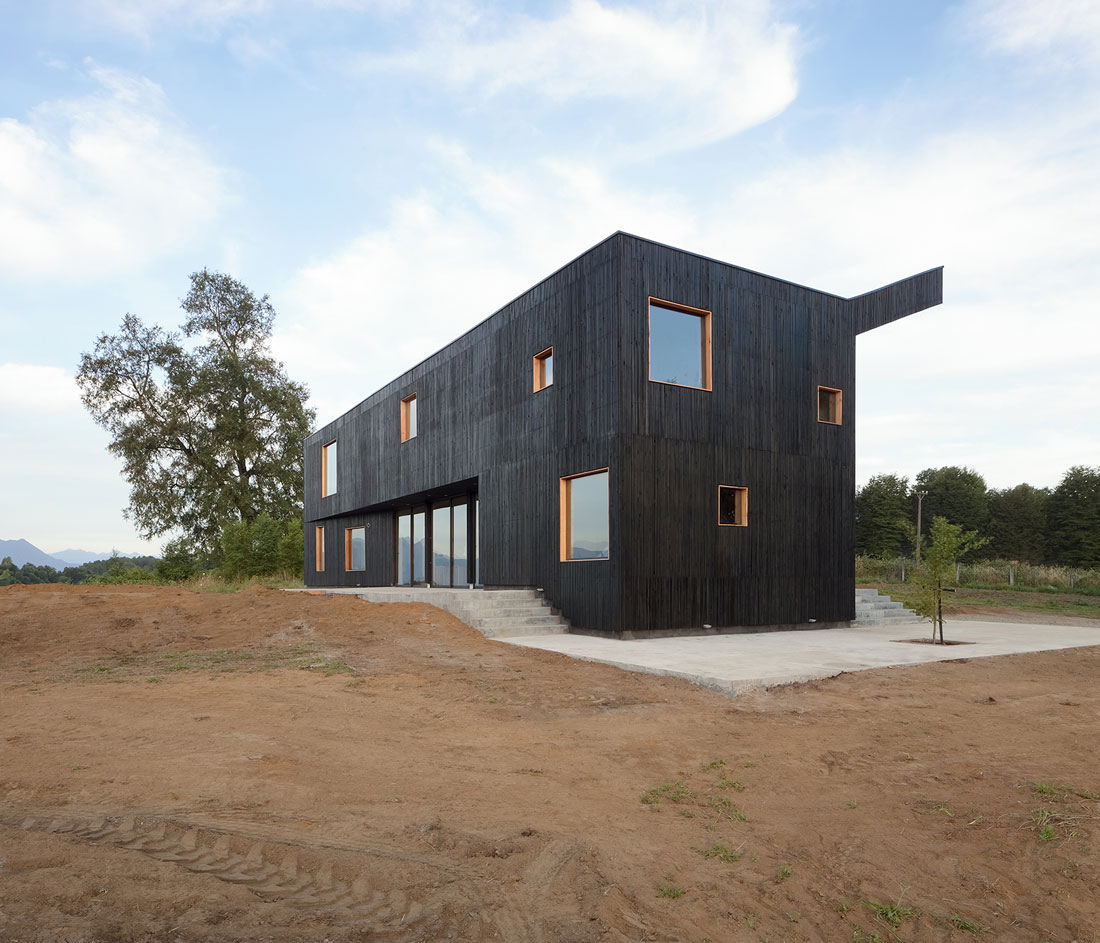 The accommodation of the house is arranged simply around a central double-height volume. This central space is orientated on a north-south axis with large glazed openings accenting the views of the volcano and the lake. The north glazing, a series of metal-framed sliding doors, takes advantage of the low winter sun entering deep into the space, which is otherwise protected during the summer months by the building’s external overhang.

This central space is the social heart of the home, accommodating the kitchen, dining and living space at ground level. Two separate guest bedrooms and bathrooms are located at ground level to either side of this space on the east and the west sides of the house.

The master bedroom and bathroom on the first floor are accessed by stair via the studio, library and gallery walkway that overlook the main central space. 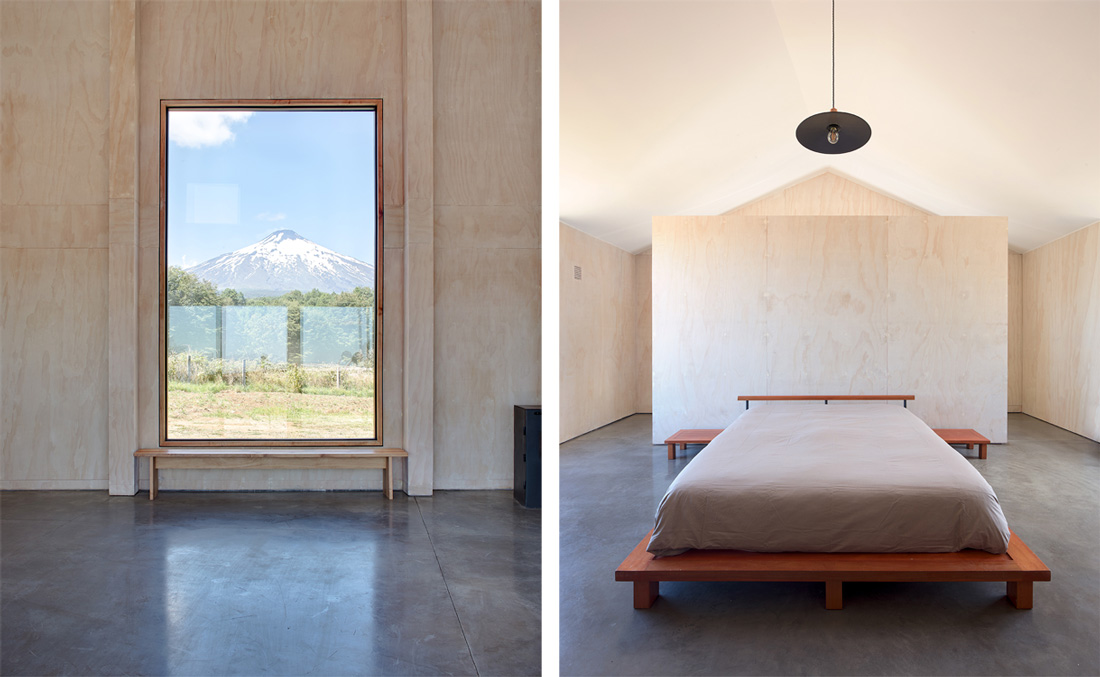 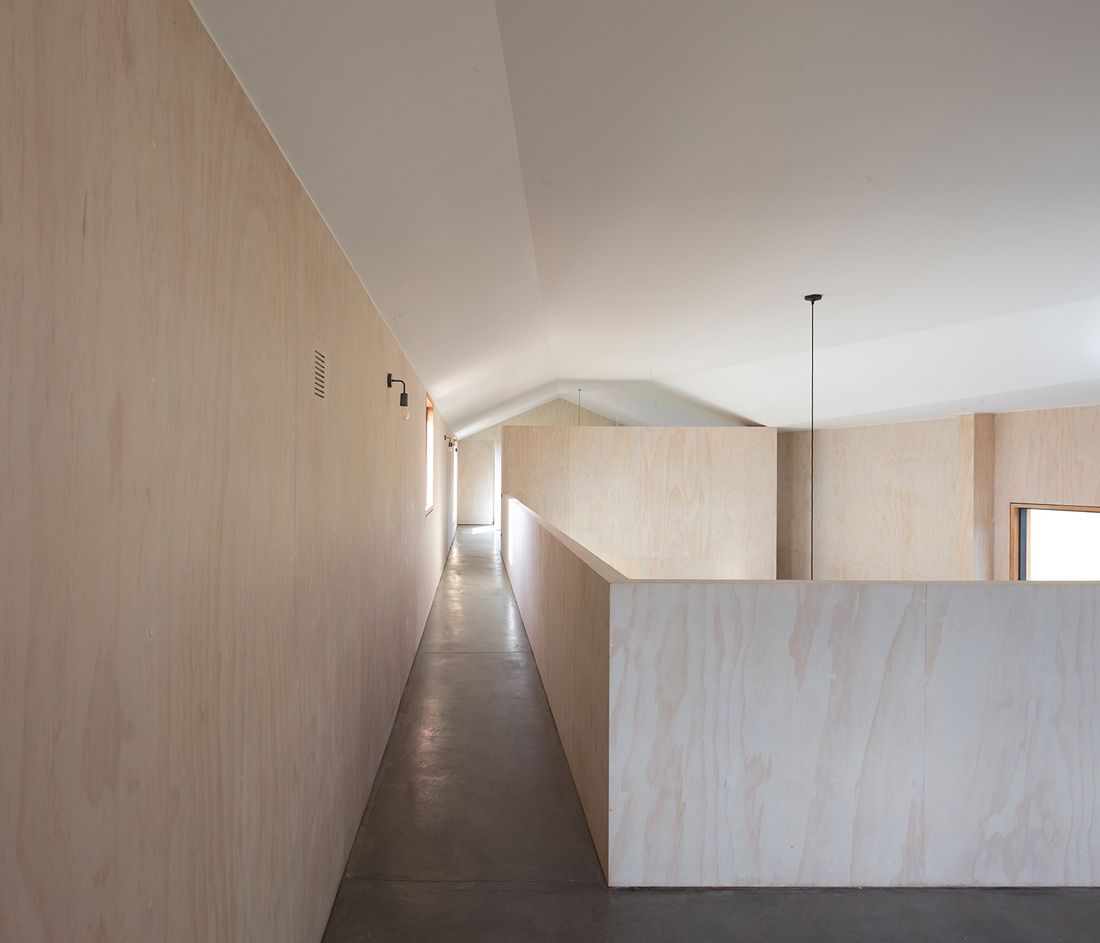 In response to a concern for the natural environment and due to its remote location, the house seeks to be as environmentally self-sufficient as possible. This is achieved by a series of passive measures and interventions:
– building orientation and highly insulated exterior (beyond regulatory requirements);
– window sizes & positions that maximise or minimise solar gain where beneficial;
– utilising the thermal mass of the interior exposed concrete surfaces to regulate the internal temperature;
– a new water well bored into a deep-lying aquifer to provide all the water requirements of the house.

In addition to these measures, the heating is primarily provided by a wood-burning stove located in the heart of the house. This stove incorporates a unique filtration system which aims to minimize smoke being released into the external environment.