The former cargo railway warehouse, a historic building which dates back to the very beginning of the 20th century, has survived to the present day almost untouched. Its beautiful brick walls, wooden beams, many sliding doors and gates are now covered and wrapped a the new shell made of steel and glass. The venue has been reborn as a concert hall, a platform for culture, art, music and other events.

The city of Riga, ruled by the Swedish, German and Russian Empires over the centuries, was one of the biggest and advanced industrial and port cities. Today Riga is known for its cultural and especially, architectural heritage, and the historical center of the city is included on the UNESCO World Heritage List. 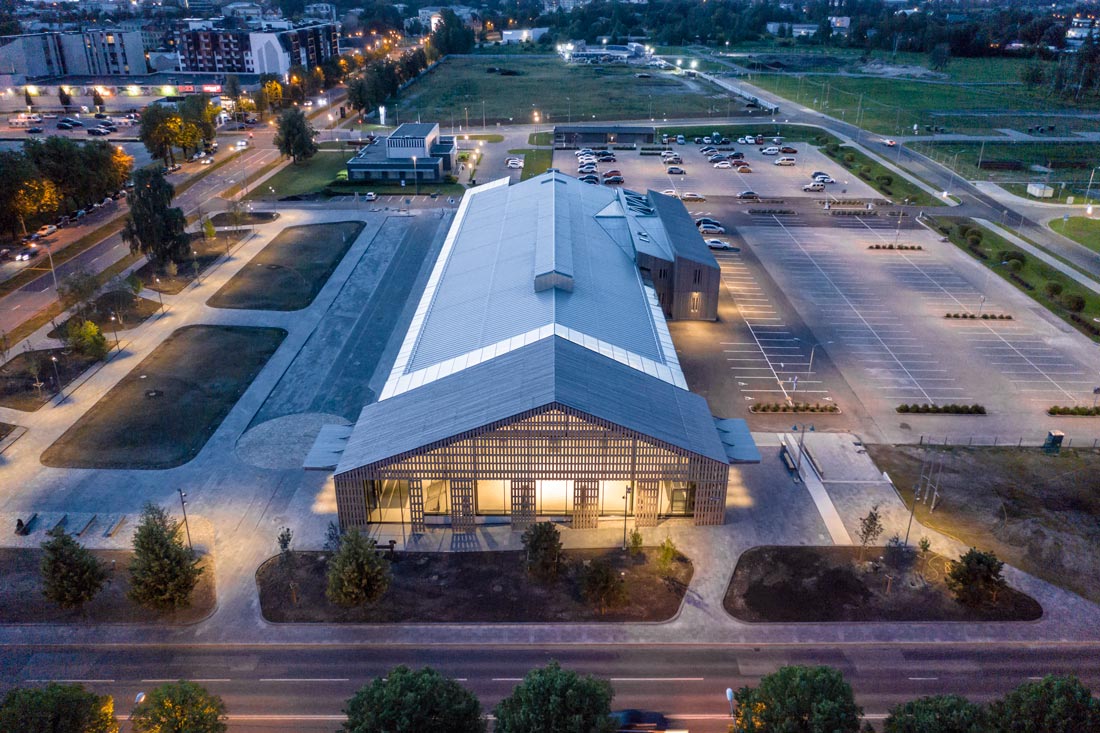 Riga, the capital city of Latvia, was one of the biggest and advanced industrial and port cities of northeast Europe in the period before World War I. This 19th-century capitalist city – not only brick buildings of numerous factories and workers’ wooden tenement houses but in fact whole core of the contemporary city with its public buildings and multi-story apartment houses – could be considered as the most significant part of Riga’s identity. The extensive heritage of the industrial age has played significant role in the fact that the architects of Riga are involved so much in those fields of architecture which are related to the architectural heritage – different restoration, renovation, refurbishment and adaptive reuse projects and have been able to gain experience, skills and mastery during the last couples of decades. 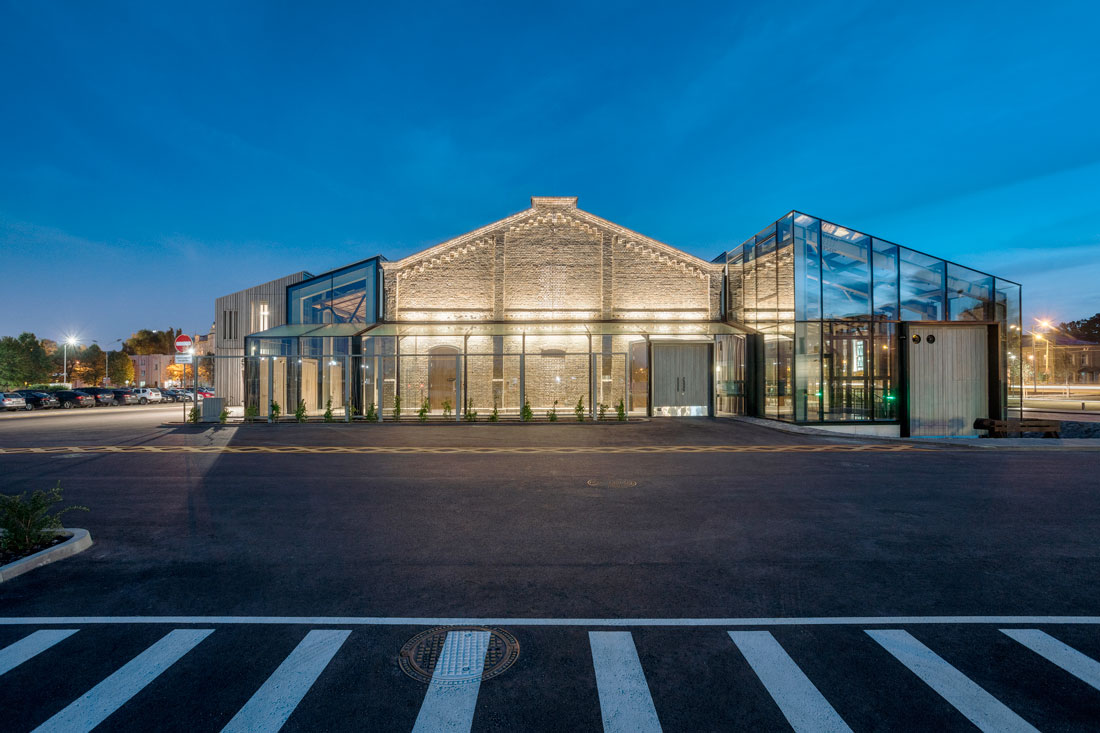 Hanzas Perons (Hanza Platform, in English) – the recent work of Reinis Liepins and Sudraba Arhitektūra – is of a similar kind, combining old and new elements, where the charm of heritage and the innovations of new architecture blend in harmony, where respect for history is reflected in elaborate modern solutions, giving new life to the old. Following this tradition of Riga’s renovation and regeneration ‘school’, this recent building reaches new level of clarity, sophistication and innovation. 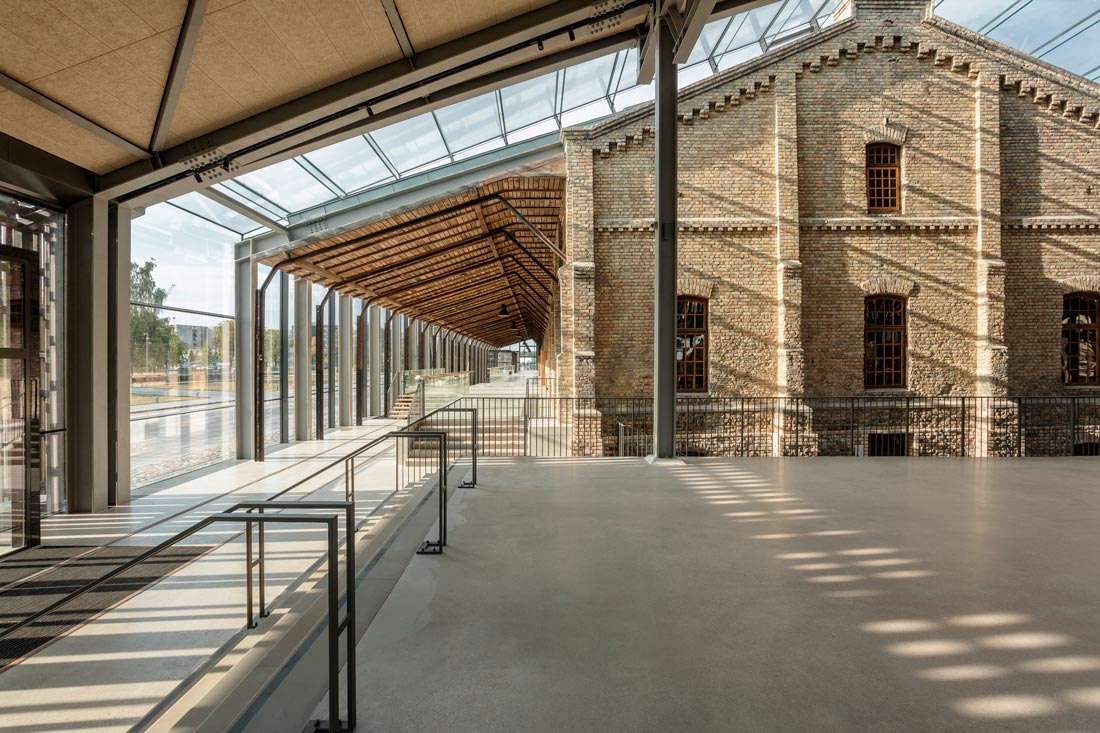 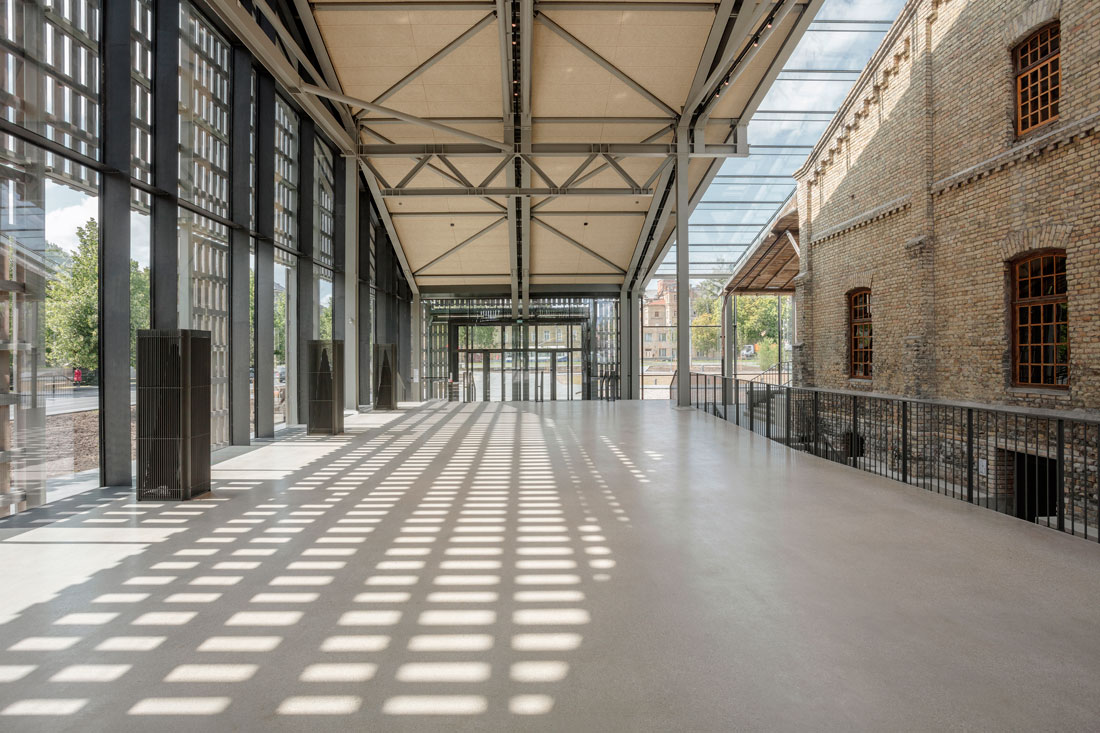 The former warehouse building which dates to the very beginning of the 20th century is located in the area of a former freight station on the edge of the historic city center of Riga. Once it was an important logistics hub with six railway tracks and some 15 warehouse buildings, but only this one has survived to the present day. It is almost untouched, with beautiful brick walls, wooden beams, and many sliding doors and gates. With good intentions and the efforts of the owners, architects and builders, the building was saved and upcycled to house a new event and culture venue, the largest private culture building in Latvia. 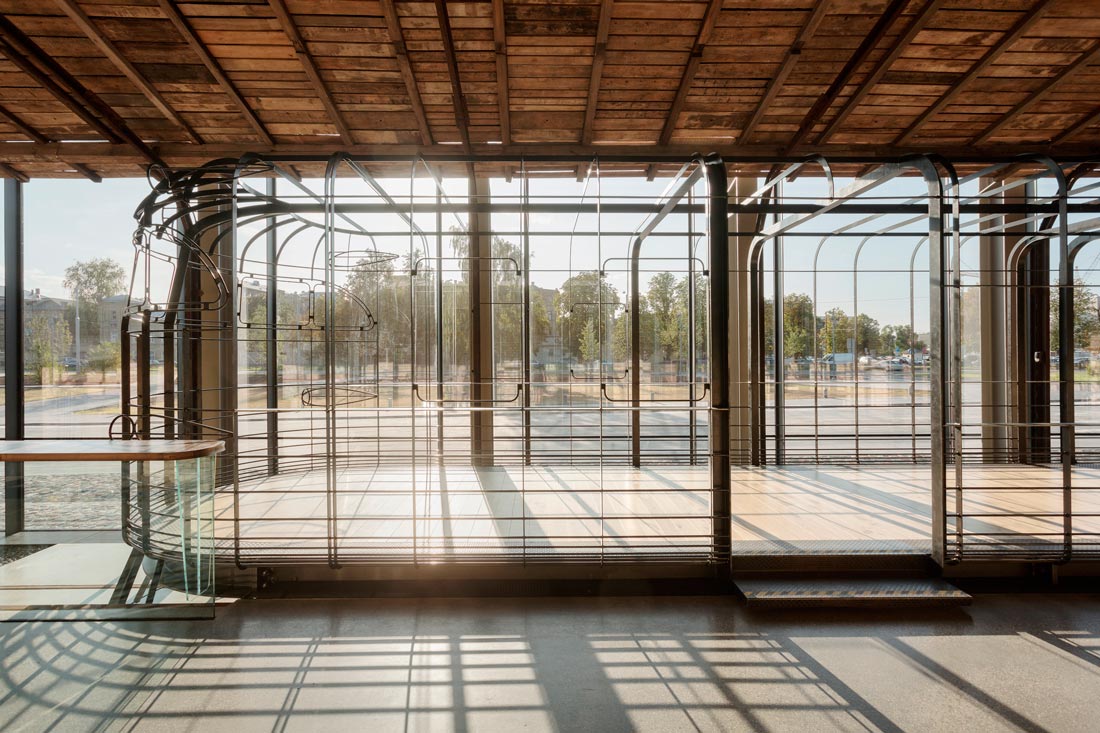 Following the technical survey, the engineers concluded that the structure – both the roof and the brick walls – did not comply with the standards of the building code. The architects’ concept was sophisticated and daring: instead of implementing new pillars and supporting elements inside the building to reinforce the existing structure, they decided to create a new loadbearing structure over and around the building.

The result may seem controversial: the historic building covered by steel and glass is, in fact, hidden. However, the biggest spatial value – a 15-meter-wide and 80-meter-long columnless hall – is preserved in its entirely, left seemingly untouched. The old jewel-like structure made of brick and wood has become a part of the interior (like a gemstone embedded in a piece of fine jewelry). 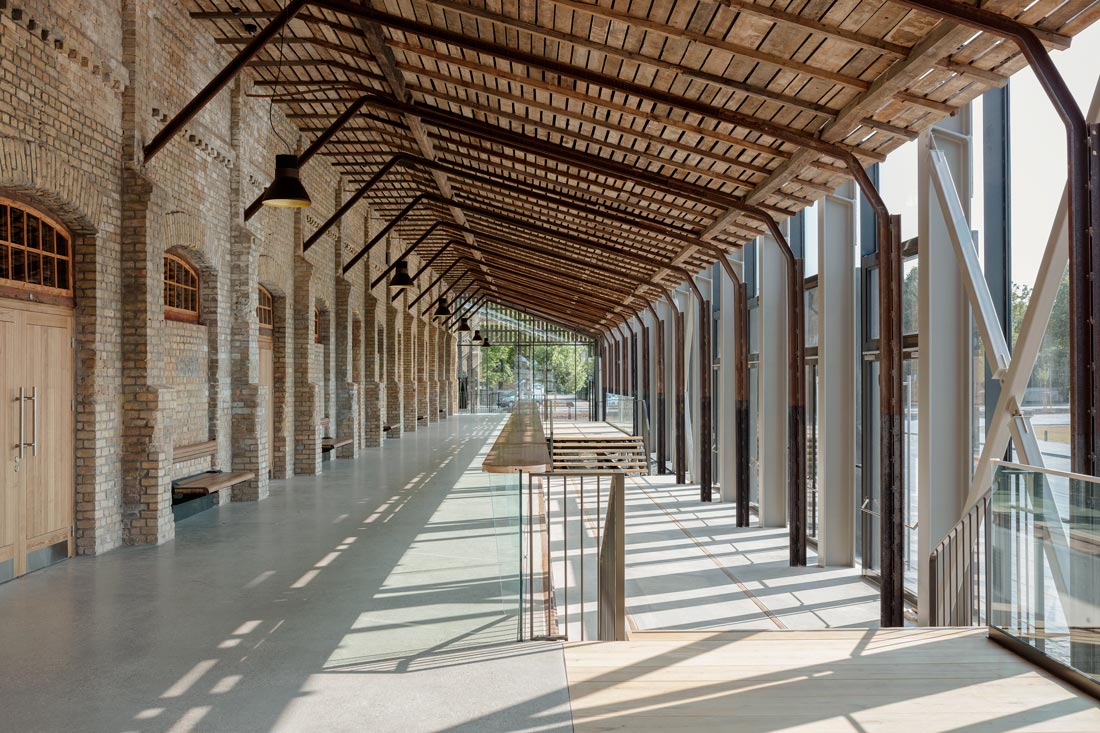 The concept of the envelope helped to resolve the additional spaces, services and technical installations in a very clear way. The roof of the warehouse formed a wide canopy on both sides, covering the logistic platforms where freight cars approached on one side and trucks on the other. Now, both platforms under the canopies have been turned into elegant, glamorous lobbies. Additionally, another full-height space is attached on the (southern) end of the historic building, bringing it closer to the street and serving as the main entrance lobby. The new building envelope also helped to satisfy today’s strict energy efficiency guidelines. 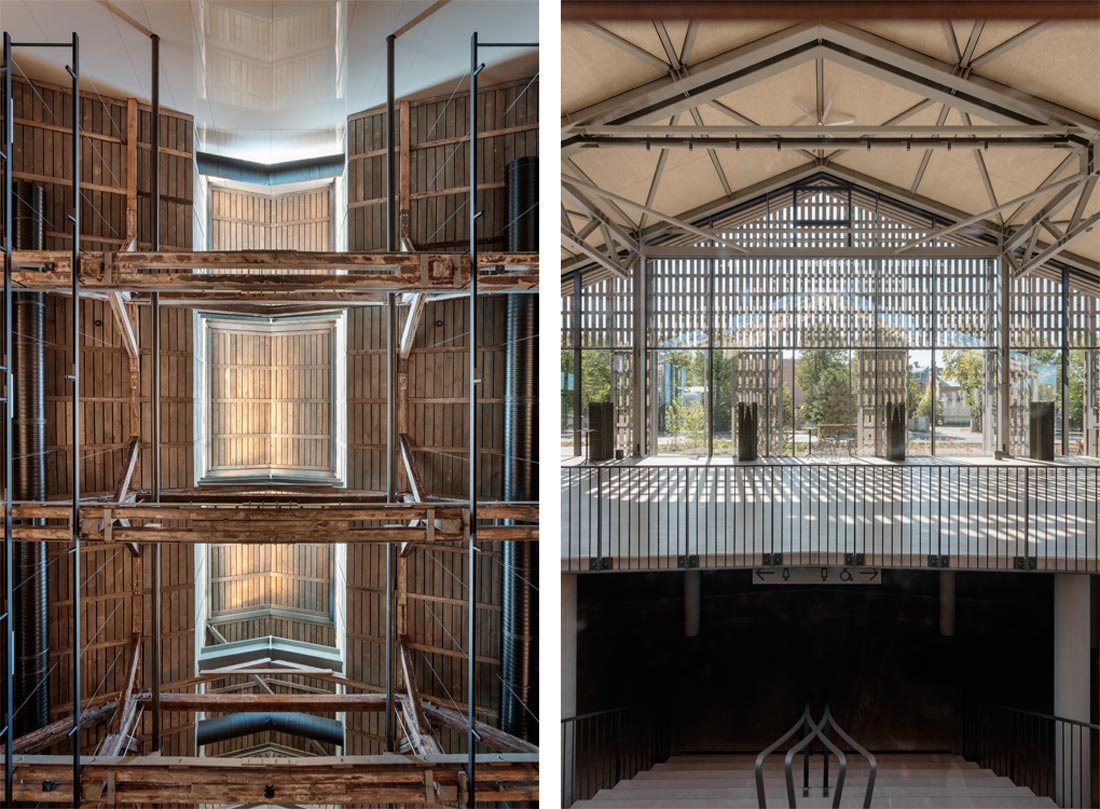 The old building with its preserved textures and details is contrasted with the minimalist materiality of concrete (continuous terrazzo flooring), steel, and glass creating a chic harmony and astonishing poetic spaces. Fine new details make modest references to the railway aesthetics, while the preserved rail track through the new building, as well as platforms now embodied in concrete, evoke the memories of the old place. 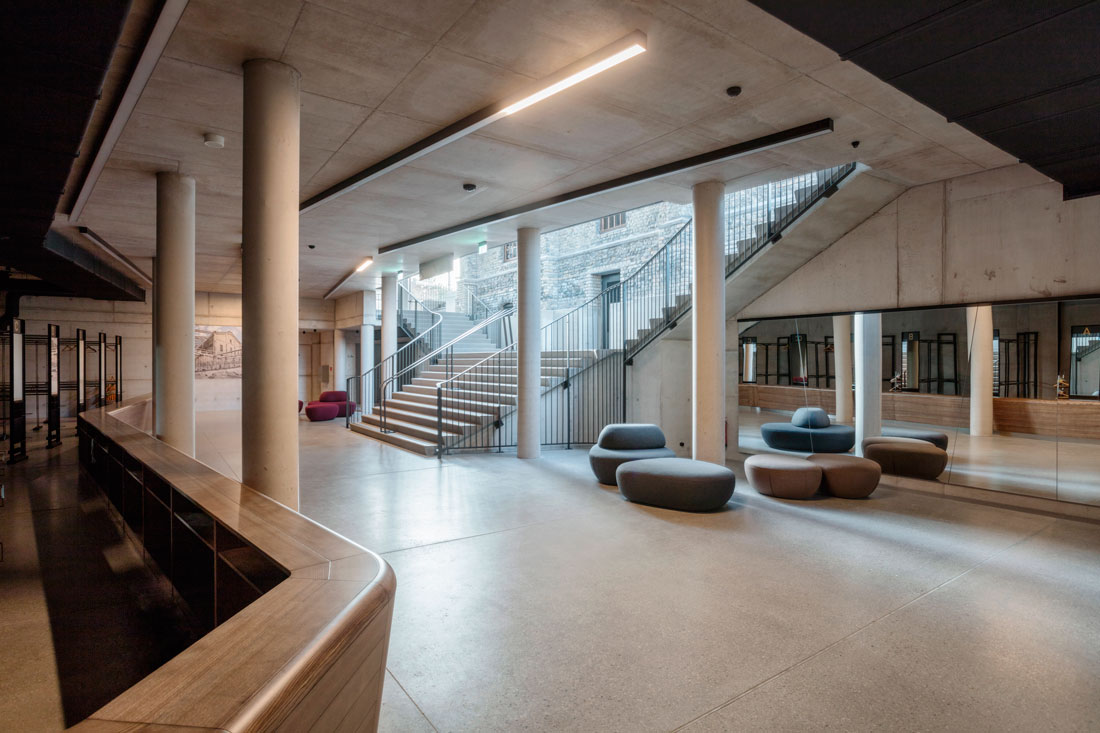 The old warehouse has been upcycled into a multipurpose venue for concerts, exhibitions, banquets and other gatherings. It now stores and deals with the ‘goods’ of culture. The main hall of 1,200 sqm can be divided into three separate spaces, allowing noteworthy flexibility. The new building acquires another appearance by the night, when lobbies are illuminated and the picturesque old structure becomes visible from the outside, through the generous and transparent lobbies. Silhouettes of people lingering on the platform and along the entryway appear like actors on a bright new stage in a once neglected corner of the city. 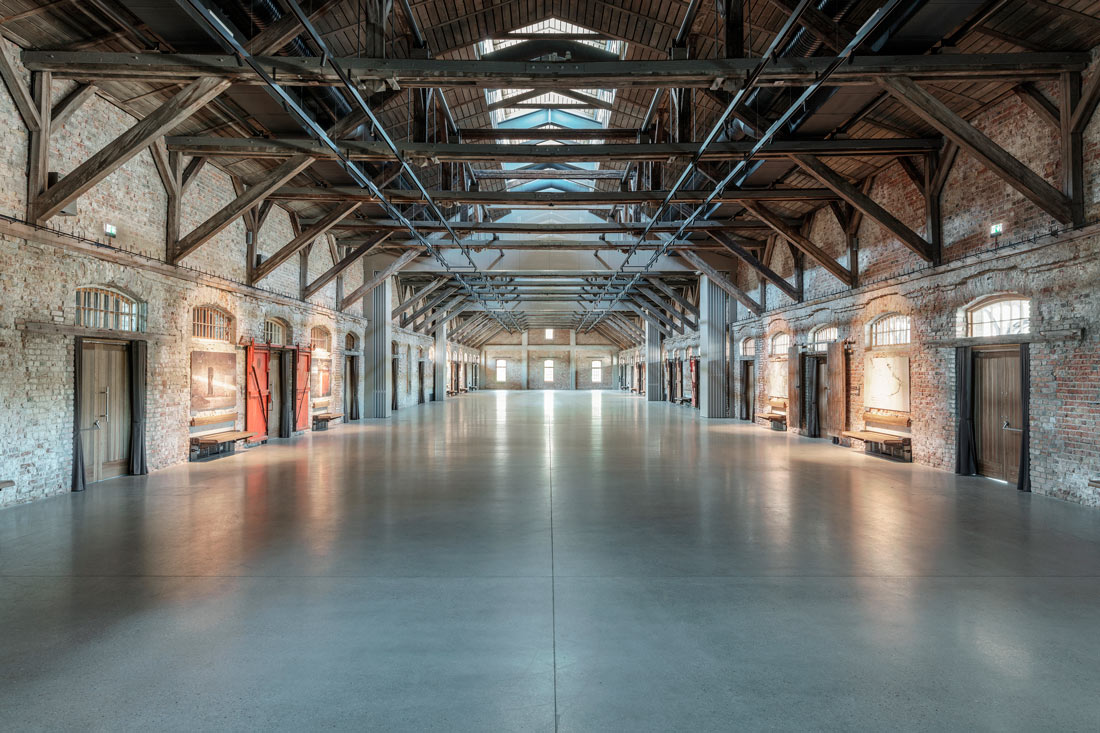 The Riga cargo station is located in the Riga historical center protection zone, but it is not listed as a heritage building, so this conservation project contributes to a broader understanding of the preservation of cultural and historical heritage.

The historical Riga cargo station, in its new appearance and function, serves as a pilot project for the future multi-functional development in this area, New Hanza. The existing building is given new life with a completely new, accessible function, open to the broadest audience. It educates the public about conservation strategies and about the history of the former Riga cargo station infrastructure. 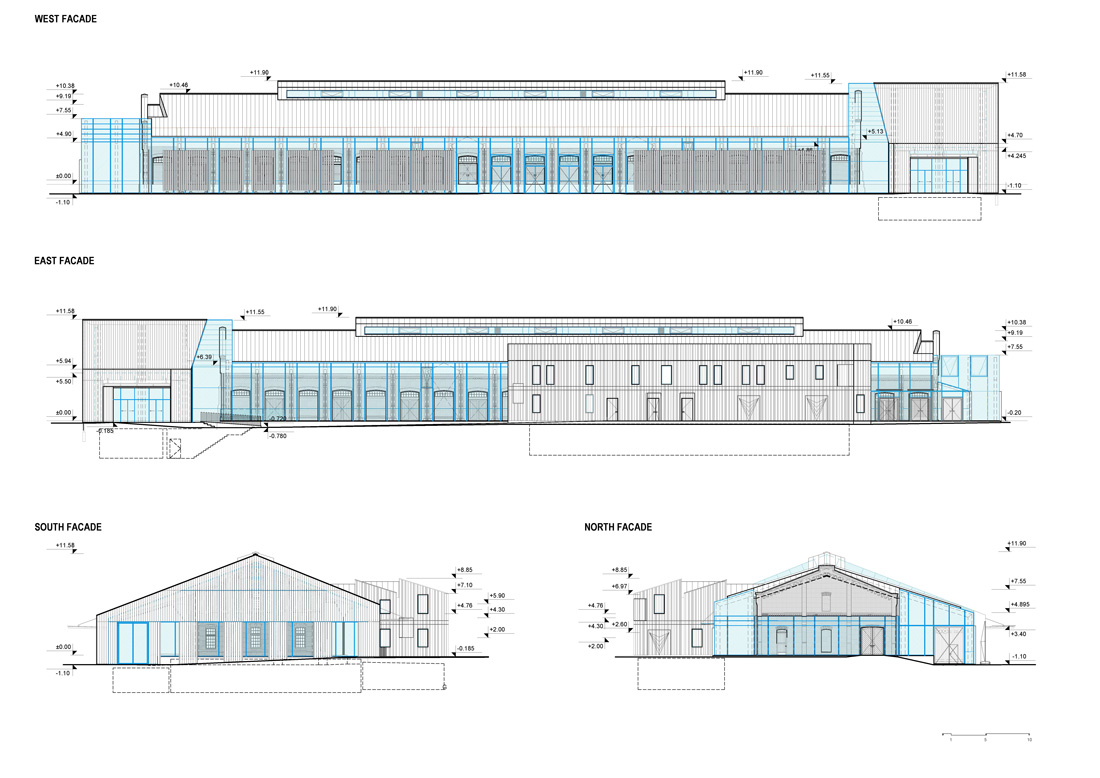 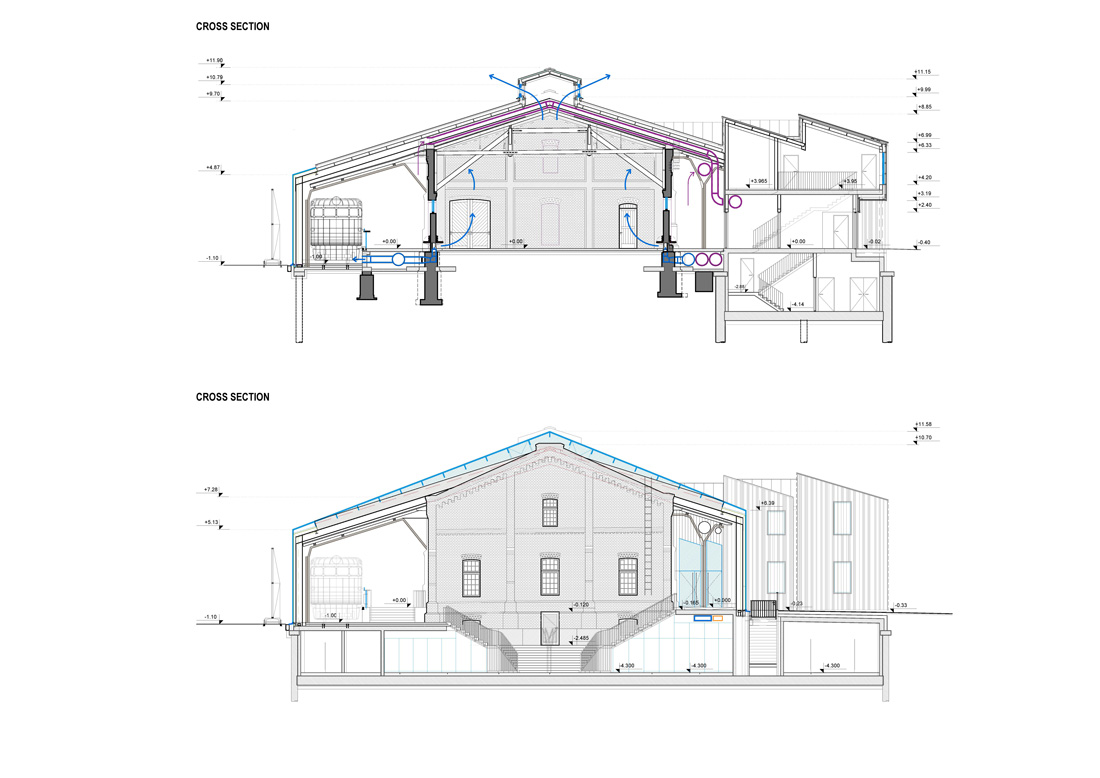 « Dignified Housing (in Times of Pandemic and Beyond)
Dortmanhof: Hallenhaus Extension »