UNStudio’s remodelling of the Hanwha headquarters building in Seoul has been completed. With this retrofit, the headquarters of the world’s market leader in solar panels has been modernized to meet the most up-to-date sustainability requirements. Based on environmental considerations, a conscious decision was made to remodel the existing building, rather than demolishing it and building something new. 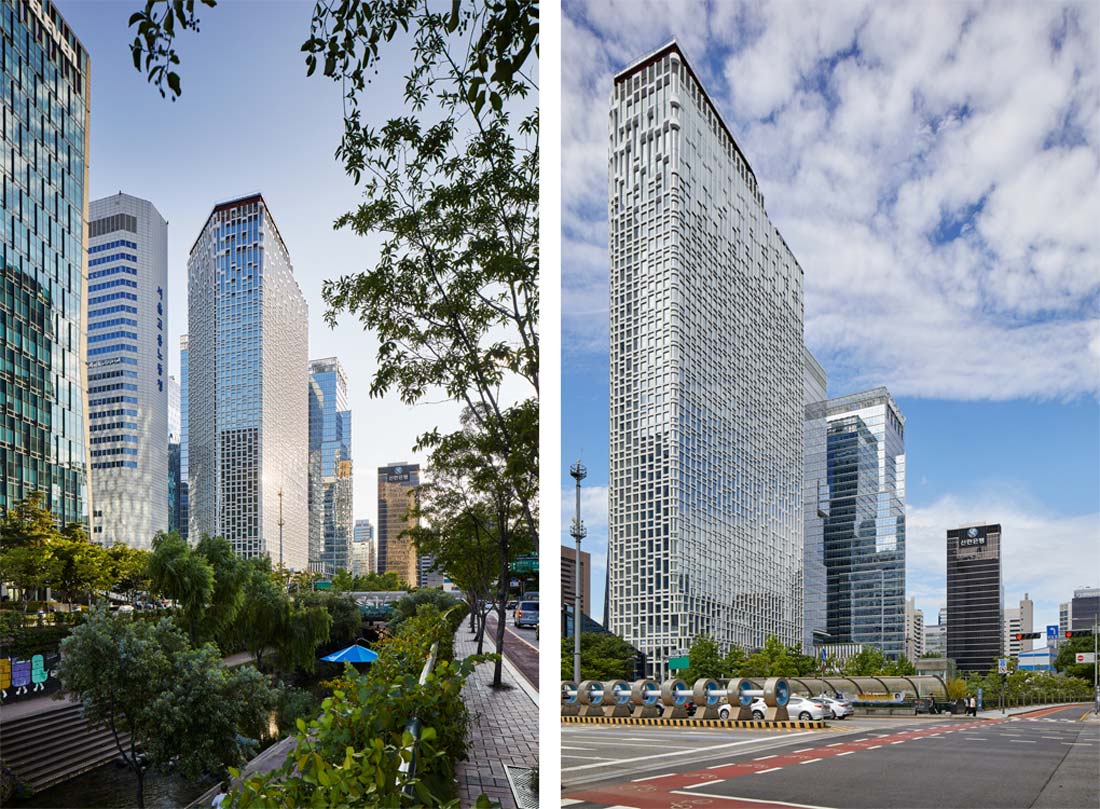 By way of an efficient construction method, UNStudio and Hanwha were also able to ensure that the employees could continue to work in the building throughout the renovation. The result of this ‘remodelling in place’ is a building with a healthy indoor climate, an extremely flexible program and a completely new, energy-generating façade with integrated solar panels. As such, the building now also effectively expresses the identity and ambitions of the Hanwha Group.

The retrofit of the office tower incorporates the remodelling of the façade, the interior of the common spaces, lobbies, meeting levels, auditorium and executive areas, along with the redesign of the landscaping.

Located on the Cheonggyecheon in Seoul, the 57,696 m2 headquarter building was seen to no longer reflect Hanwha as one of the leading environmental technology providers in the world. For the competition to remodel the tower, UNStudio teamed with Arup (sustainability and façade consultant) and Loos van Vliet (landscape designer). Following the selection of the competition design, agLicht joined as lighting consultant.

The existing façade consisted of horizontal bands of opaque panelling and single layers of dark glass. In the remodelling, this is replaced by clear insulated glass and aluminium framing. 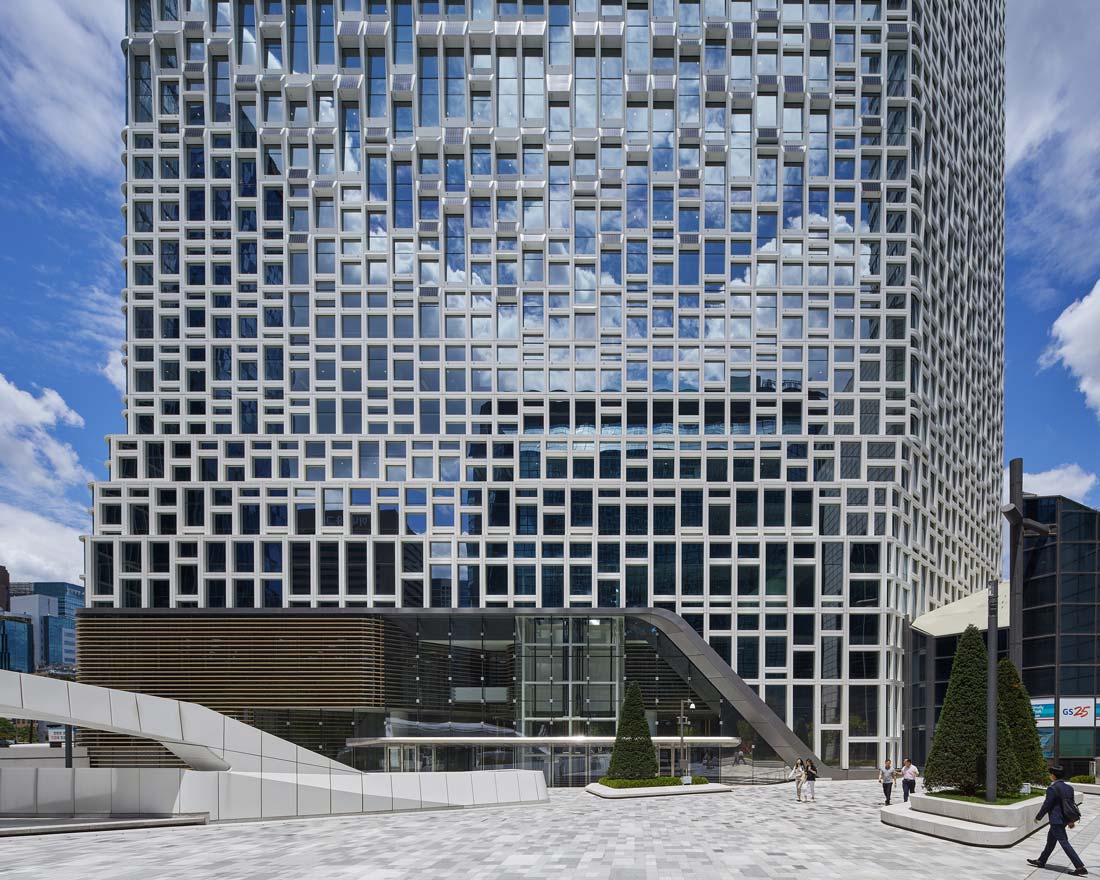 The retrofit of the façade and the interiors was carried out while the building remained fully occupied and functional, thus enabling the company to remain working in the building throughout the construction period. In order to enable this, three floors were refurbished at a time, in both the interior and on the façade.

Electing to choose a construction method that would have minimal impact on both the operation of the company and on the environment serves as a good example for all stakeholders in the construction process to consider alternative parameters and sustainable measures that can be introduced when retrofitting existing buildings. 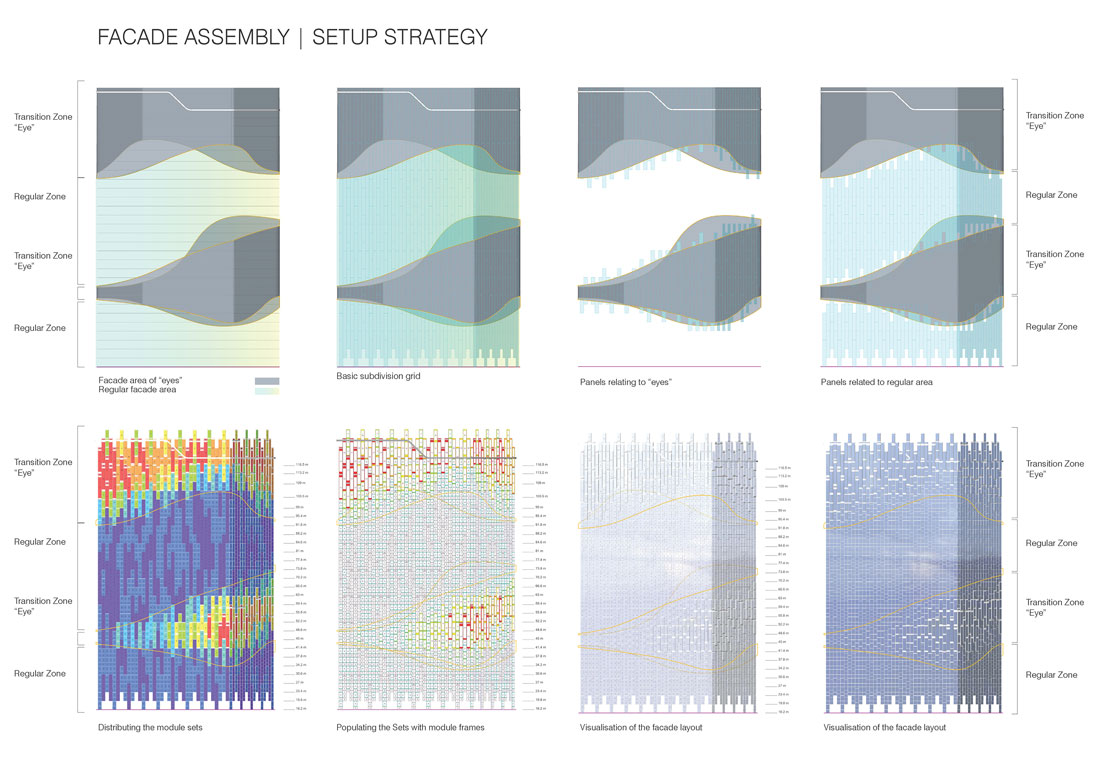 Addressing the request for the design to be guided by the surroundings, influenced by nature and driven by the environment, UNStudio developed an integrated responsive façade concept which improves the indoor climate of the existing building and reacts to both the program distribution and the location.

“By means of a reductive, integrated gesture, the façade design for the Hanwha HQ implements fully inclusive systems which significantly impact the interior climate of the building, improve user comfort and ensure high levels of sustainability and affordability. Through fully integrated design strategies today’s façades can provide responsive and performative envelopes that both contextually and conceptually react to their local surroundings, whilst simultaneously determining interior conditions.” – Ben van Berkel

The basis for the façade expression is to achieve an effect of variety, irregularity and intricacy throughout. This expression is informed by the sun and orientation factors, as well as the program: by varying the placement of the façade panels a variety of program-related openings are created.

In the design for the Hanwha headquarters building, the north façade opens to enable day lighting within the building but becomes more opaque on the south façade, where the sun would otherwise have too much impact on the heat load of the building. Openings within the façade are further related to the views: opening up where views are possible but becoming more compact on the side adjacent to the nearby buildings. 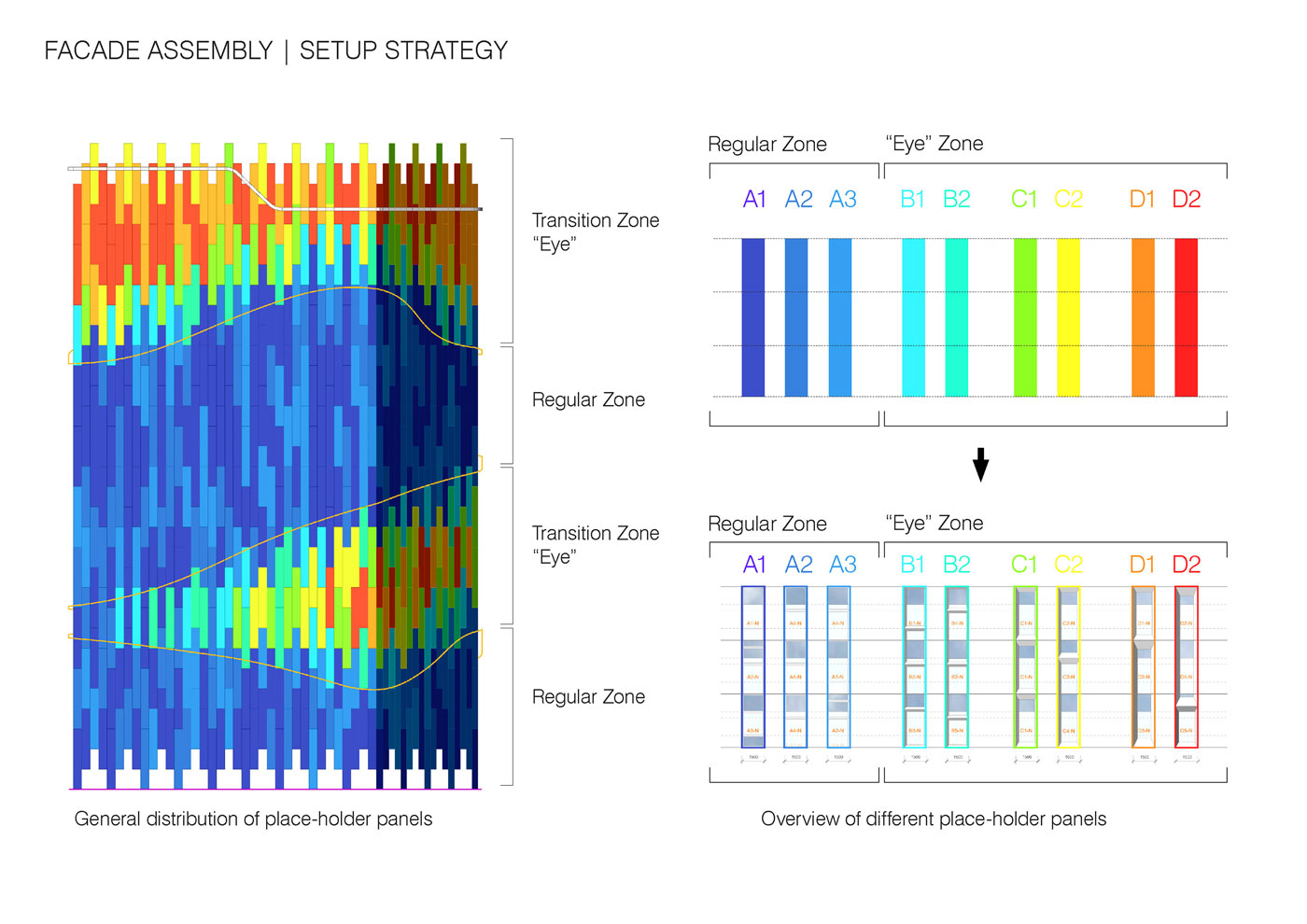 Direct solar impact on the building is reduced by shading, which is provided by angling the glazing away from direct sunlight, while the upper portion of the south facade is angled to receive direct sunlight.
PV cells are placed on the opaque panels on the south / southeast facade at the open zones where there is an optimal amount of direct sunlight. Furthermore, PV panels are angled in the areas of the facade where energy from the sun can best be harvested. 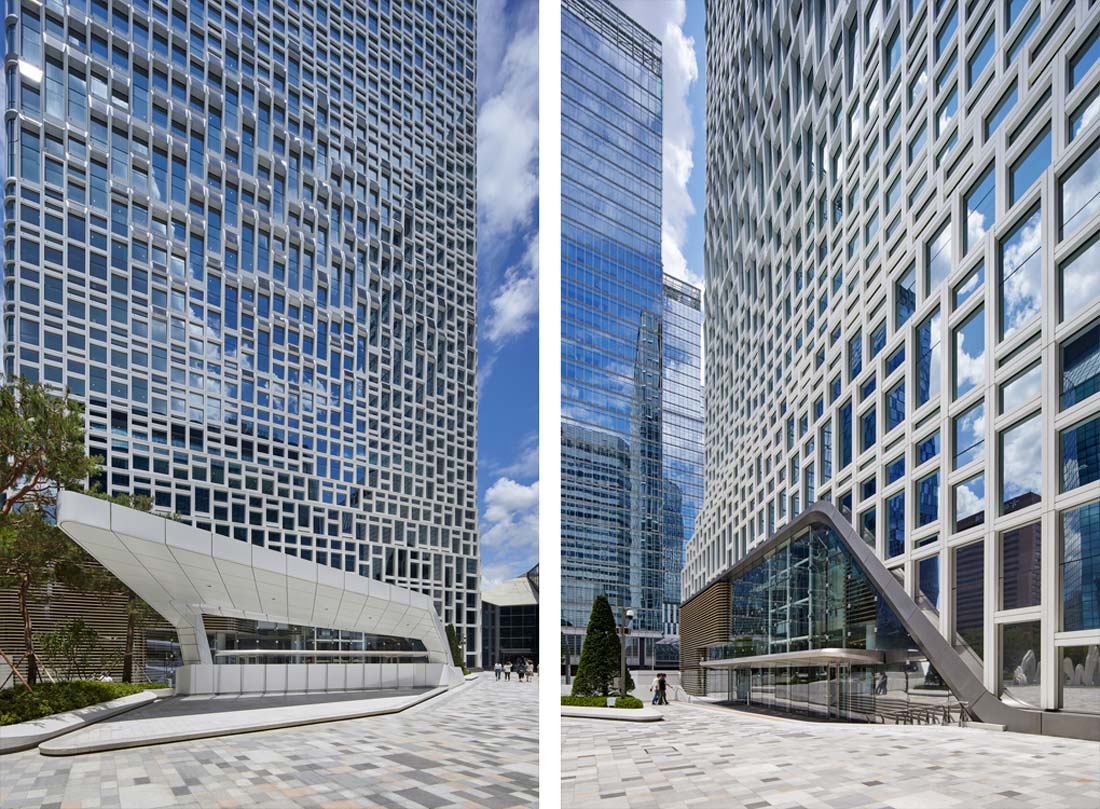 The fluid design of the plaza landscape encourages people to enter from all sides, while the multifunctional planters not only serve as a wayfinding element but also provide customized seating areas. The different zones within the landscape can be used for a range of activities, from more private relaxation to larger scale gatherings.

In UNStudio’s concept for the lobby of the Hanwha headquarter building the landscape continues into the interior and acts as a guiding aid, while natural materials and planting provide a relaxing environment for visitors.
A subtle colour scheme is combined with wooden furnishing and, in both the north and the south entrance lobbies, a coffee corner creates the possibility for social interaction and exchange. 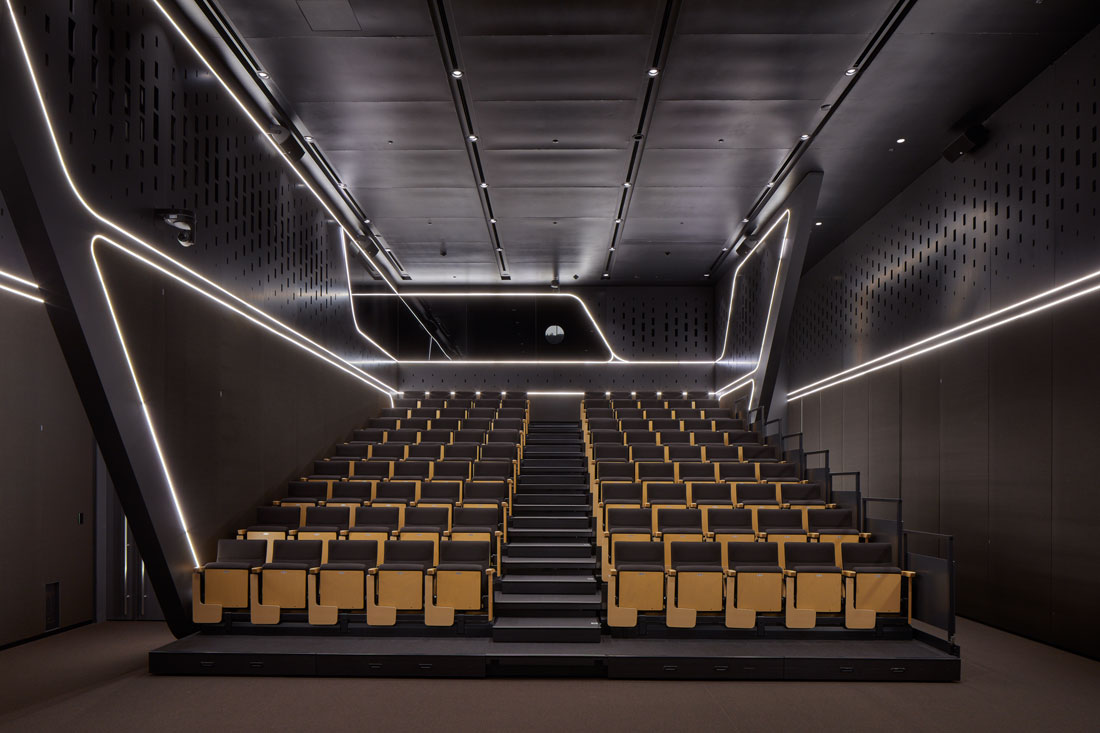 The increased floor to ceiling height of the lobbies is emphasised through the new facade design by increasing the daylight entering the lobby areas and creating visual connections between the outside plazas and both lobbies.
At the lift lobbies, intuitive guidance through interior design elements and integrated lighting seamlessly connects the common areas and hallways at all office levels. This linkage between lift lobbies and the common reception areas and hallways creates a common identity at the different levels, yet enables flexibility in the workspaces and the allocation of different type/sizes of offices, both now and for the future. 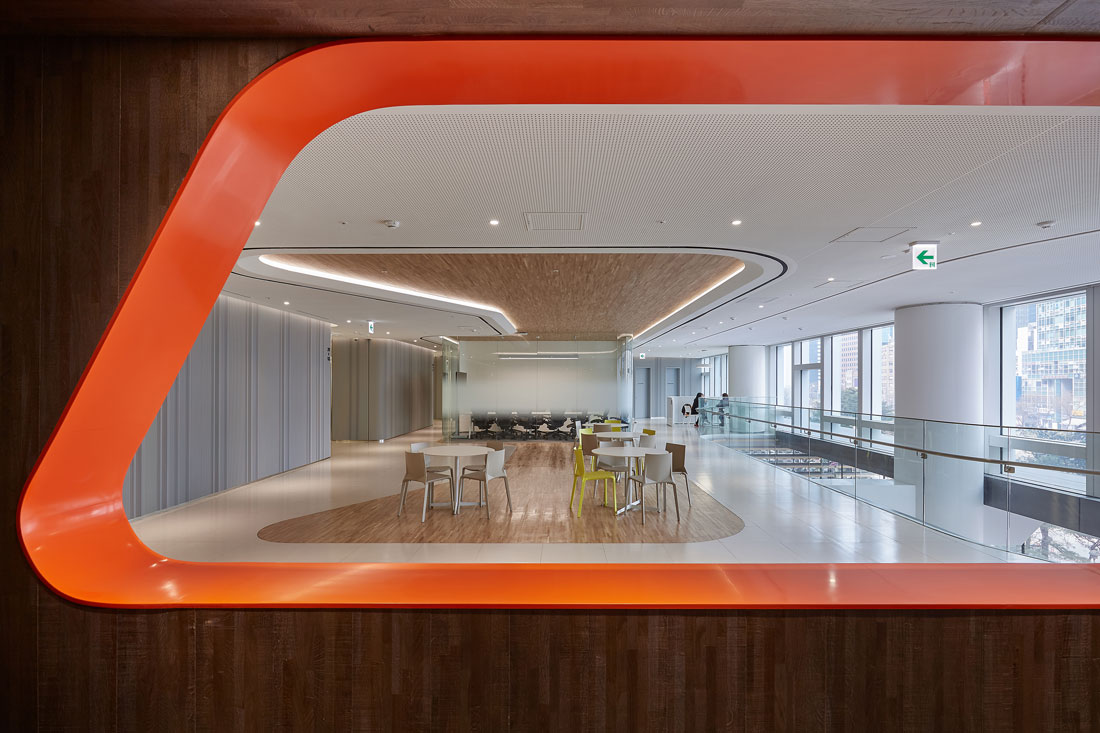 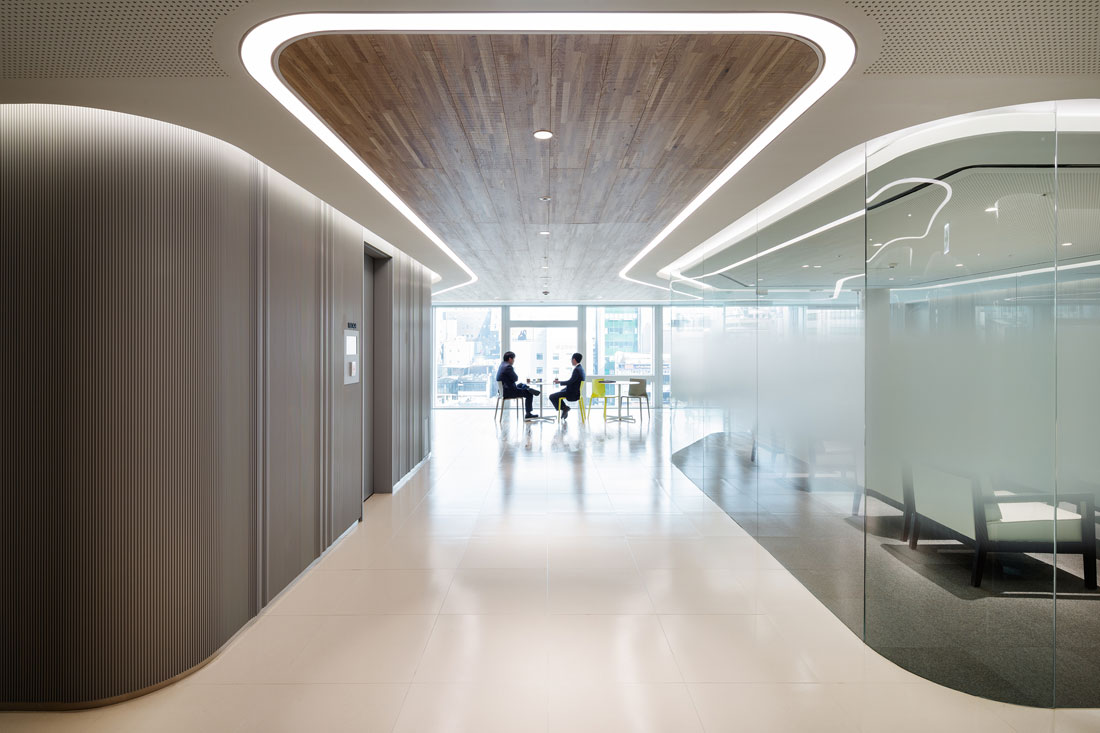