Digital messaging is having an impact on cities as brands. ING has identified Europe’s Top 50 Cities using existing global city indices and reordered them according to their share of the online conversation. The built environment communications agency has also provided analyses to show which cities punch most above their weight and which show the most potential for increasing their digital profiles. A snapshot of top trending topics and a comparison of performance between the 2019 and 2020 editions highlight how online conversation patterns are always changing.

This global exploration into digital visibility highlights that the extent to which people are talking about cities is positively correlated with economic potential at a country level. Increasing awareness of a place may be one of the single most important measures local and national leaders can take to position their cities for recovery.

“In the new normal of the COVID-19 pandemic, it has never been more important for cities to communicate clearly and effectively with their people both online and on social media. Every city has significant talent and investment needs, but smaller urban areas may be the biggest winners in raising their digital profile to access new opportunities. The most forward-thinking places are already using a long-term strategy to identify and share their unique story across all forms of media. Crucial to future success will be regaining momentum after the pandemic, which requires agility in an ever-changing online environment.”

Last year, ING introduced a new ranking identifying how Europe’s Top 40 cities featured on social media and online news across major languages. The 2020 edition expands this to 50 cities. While there is stability at the top of the ranking – with London, Paris, Madrid and Barcelona retaining their positions – there is significant movement lower down as smaller cities gain profile. The addition of two German cities, and one new city each from Portugal, Spain, the Netherlands, Poland, and Belgium, suggests smaller cities are leveraging the network potential that exists when strategically connecting conversations with their surrounding cities. It also appears far more difficult to climb in the rankings than to drop, highlighting the challenge cities face in consolidating leading positions through a consistent and long-term communications plan. 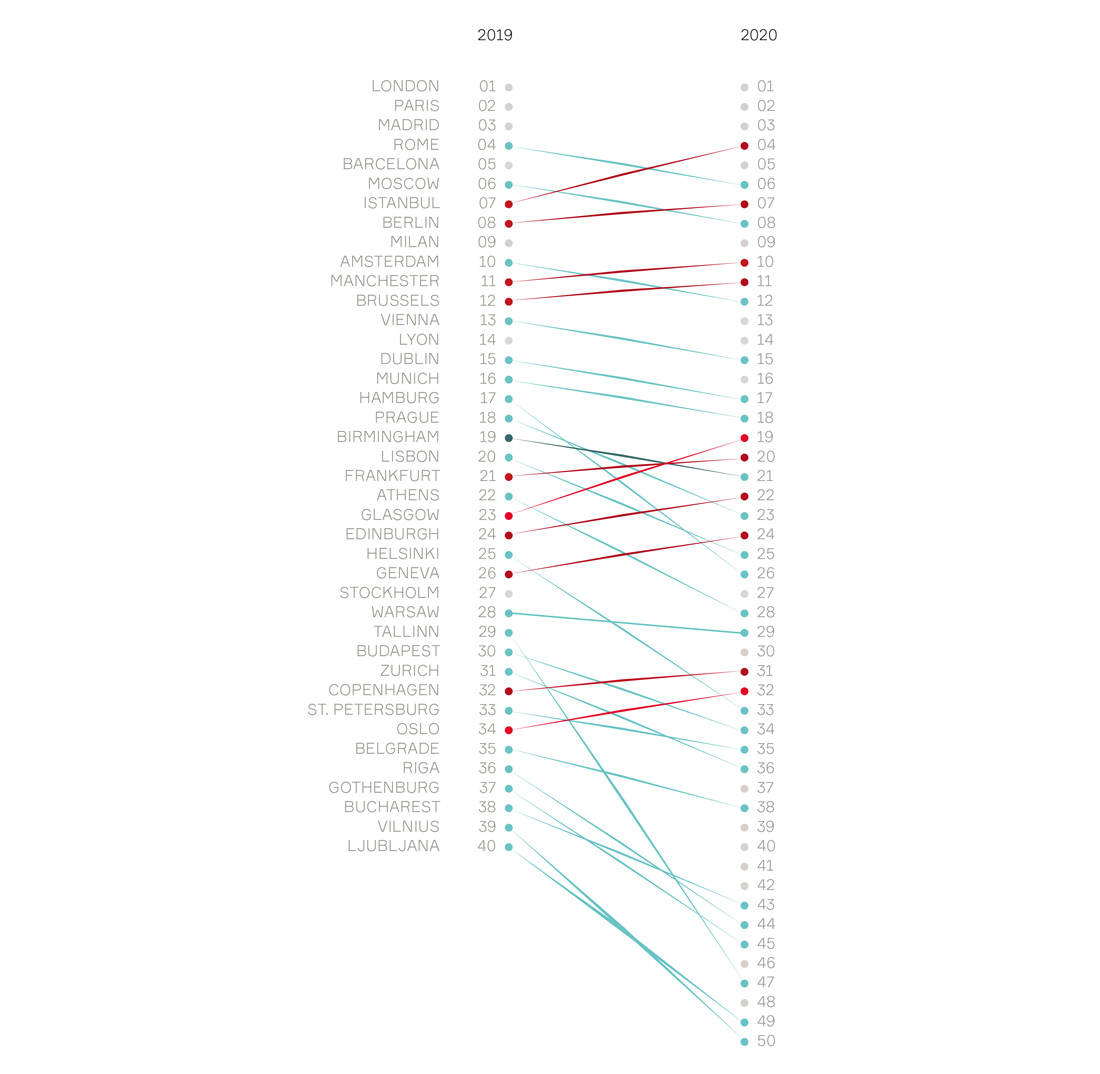 – London and Paris share almost a third of the online conversation for the Top 50 cities. However, both cities have seen a reduction in visibility since the 2019 edition.

– Berlin, as with other German cities, scores well for digital news coverage. However, comparatively fewer mentions on social media reduce its overall ranking. The same pattern exists for many capitals in Northern and Eastern Europe.

– Valencia, Istanbul, and Barcelona have the highest percentage coverage for social media, but comparatively lower news coverage. Mentions were not inflated in the summer months of higher tourist arrivals.

– Cities featured from Germany (6), the UK (5) and Spain (3) are collectively responsible for almost half of all mentions in the Top 50. 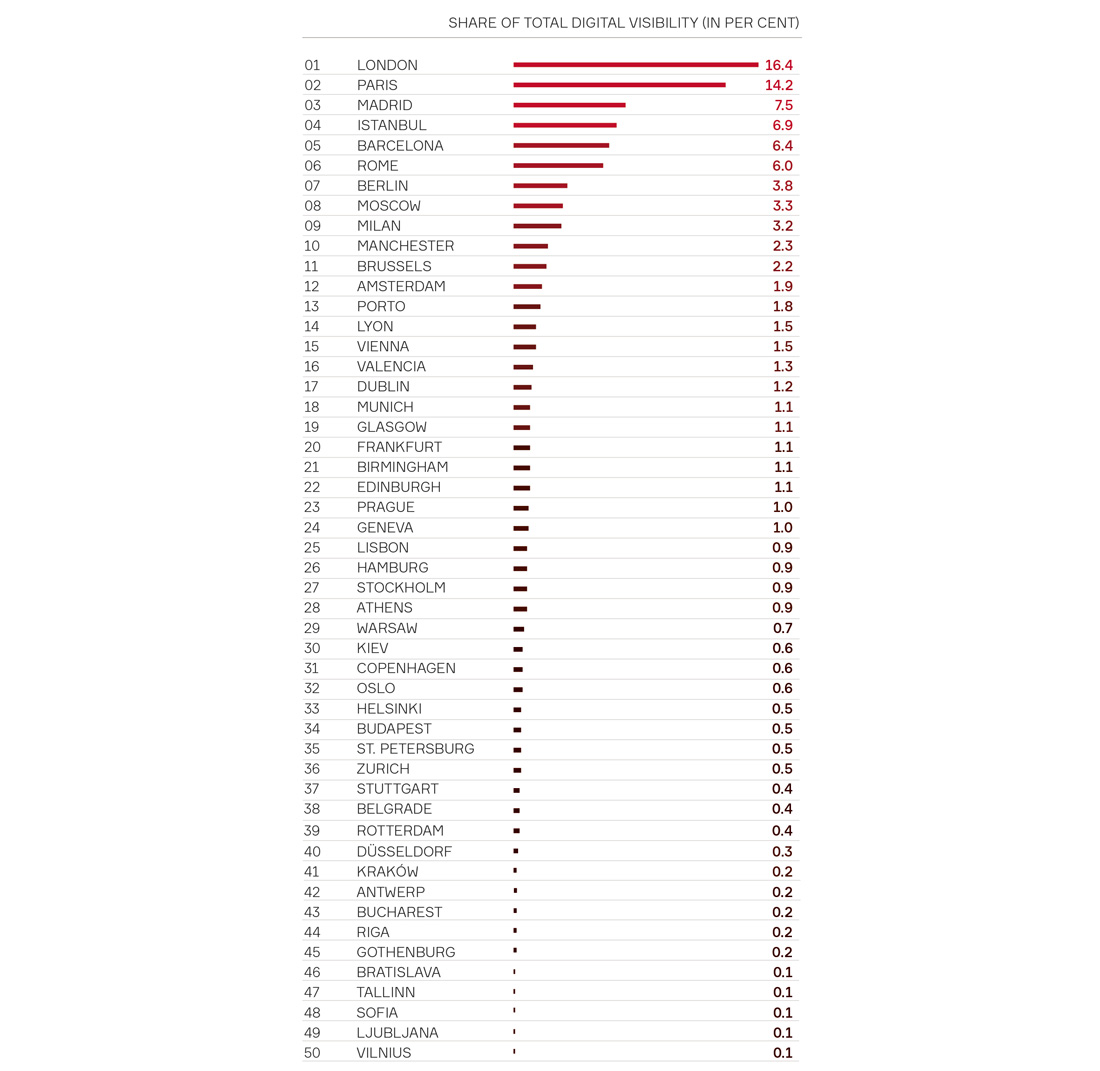 Oslo, which has gained digital visibility over last year’s ranking, has also seen a reduction in its visibility score across global city rankings, leading to a closer alignment between the two.

–     Oslo’s digital visibility gain over last year’s ranking comes alongside a reduction in its global city ranking, resulting in a closer alignment between both.

–     Edinburgh and Geneva (like Glasgow), noted in our 2019 edition for punching above their weight, have seen an increase in both measures.

–     Istanbul had the most mentions in Turkish, which may explain the limited impact of these conversations on its global city ranking.

–     A successful communications campaign, which elevated Helsinki’s digital visibility in our 2019 edition, has been followed by a subsequent fall in 2020. Like Hamburg, however, its global city ranking increased in the following year.

–     Cities like Riga, Tallinn, Ljubljana, and to some extent Vilnius, in countries without other large urban areas, may require regional-level strategies to compete against nations more able to pool their digital visibility across a local network of cities. 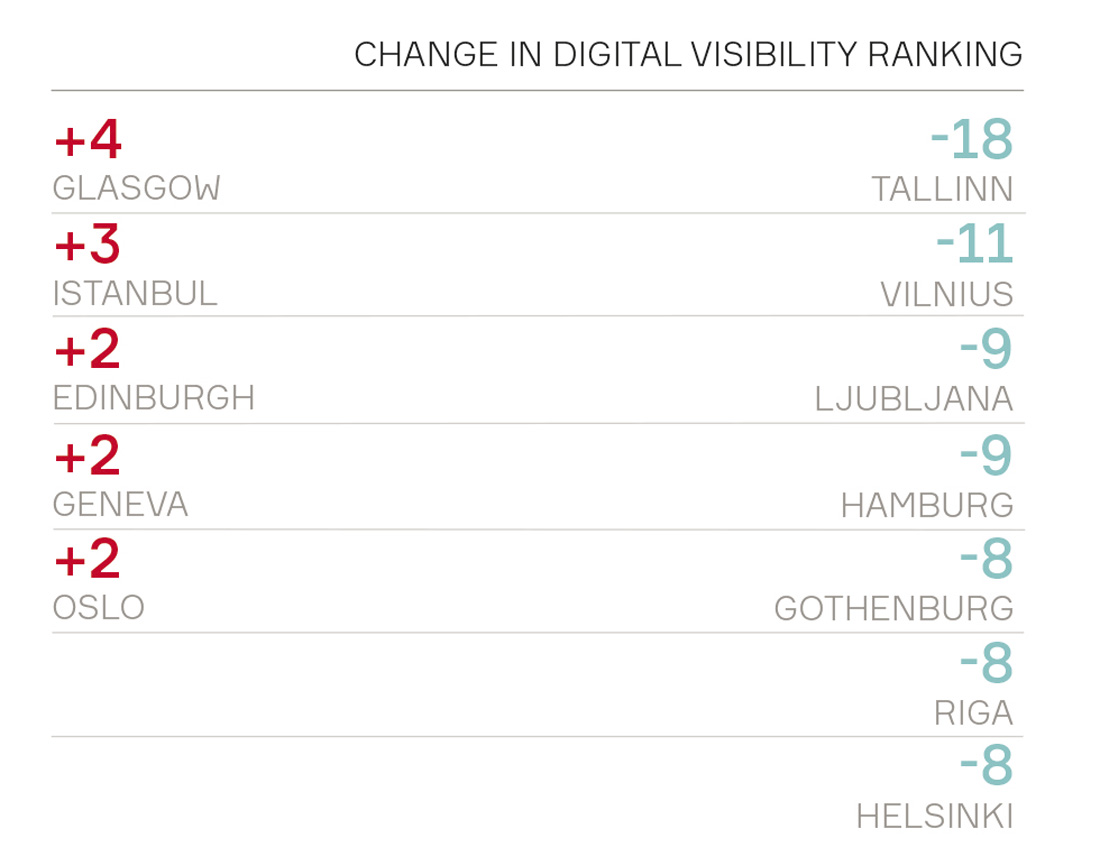 Unlike last year’s survey, sport no longer dominates conversations in cities. Peaks were more likely to take place for political and cultural activities.

–     Stuttgart’s peak is one of the few directly related to a city’s industrial capacity: the global launch of an all-electric Porsche.

–     Almost a third of top mentions for sport related to antisocial behaviour, as with racist incidents that took place during a Bulgaria v England football match in Sofia. Kiev’s spike was for similar reasons.

–     While politics doesn’t feature in the Top 5, it was the top trending topic across most cities. Crisis (particularly the fire at Notre Dame in Paris) and activism, often around climate, featured strongly too.

–     Live programmed events remained responsible for almost half of all the top trending content in Europe’s Top 50 cities, underlining their strategic communication value.

–     Vilnius airport’s Christmas tree made of confiscated items was the best example of creating viral content. A flight scheduled for Düsseldorf that accidentally landed in Edinburgh was the most peculiar topic to trend. 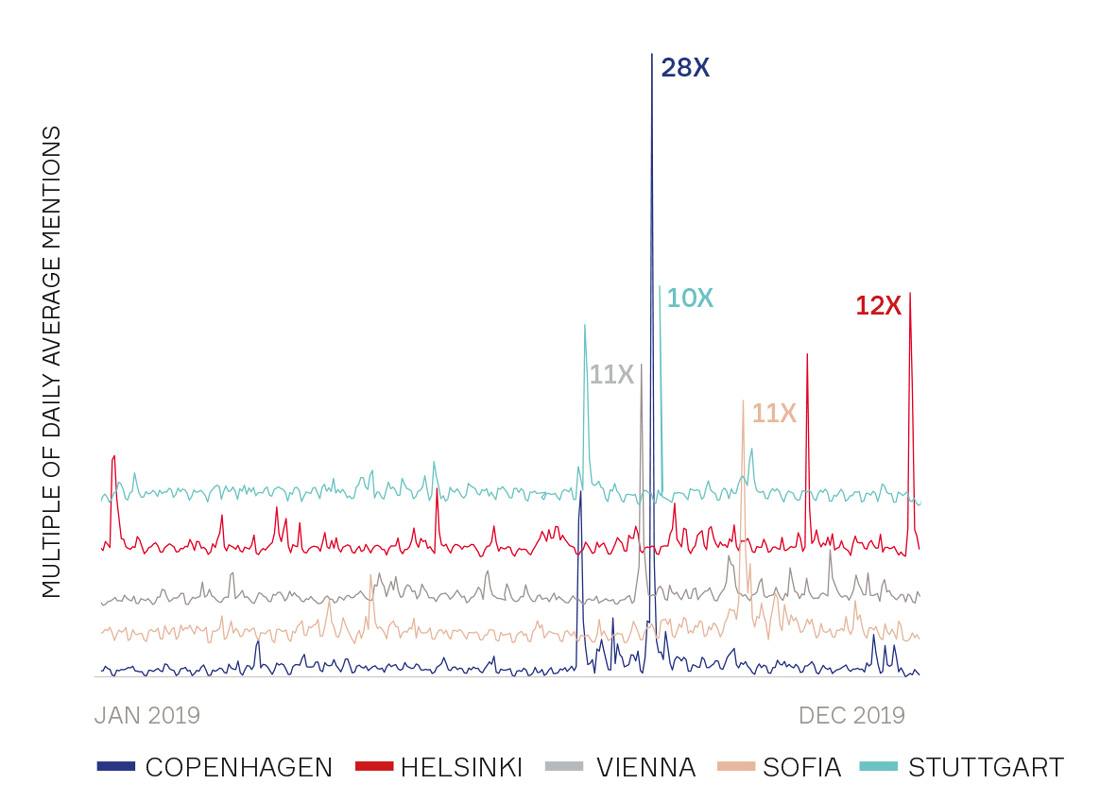 This chart ranks the Top 50 European cities by visibility on global city indices against total digital mentions. A downward slope illustrates cities that aren’t necessarily making the most of their stronger rankings, while a rising gradient highlights the cities with the most opportunity to challenge global city rankings. While only London, Paris, and Prague have the same ranking for both city ranking and digital visibility, a tight correlation between the two, and the influence digital visibility recorded in the 2019 edition appears to have on the updated city rankings, suggest that what people are talking about online impacts place branding. 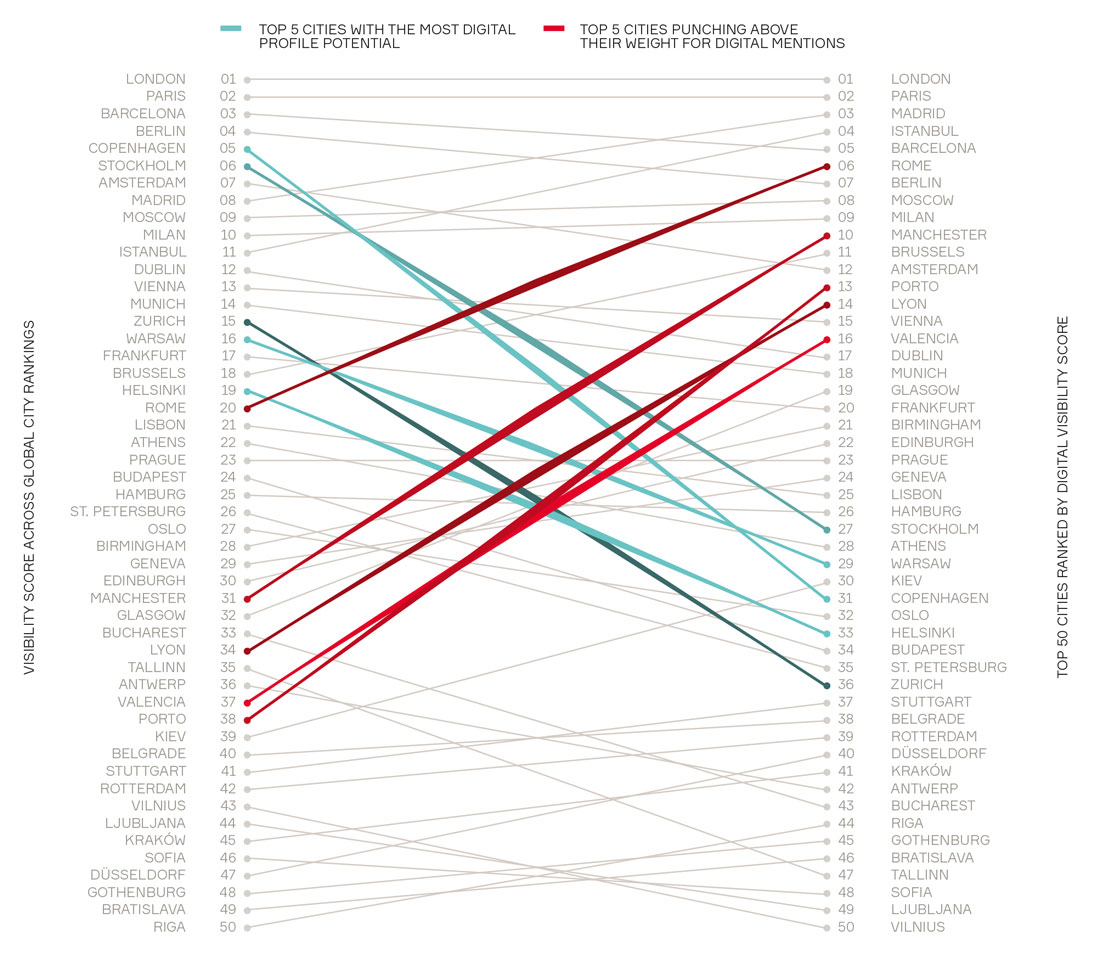 Top 5 Cities Punching Above their Weight for Digital Mentions

These cities generate significantly more mentions on digital media relative to their positions on city indices. This presents an opportunity to climb the rankings by consistently improving the quality and impact of the conversation about them. Their category shares show significant variance, highlighting areas in which these cities can potentially consolidate a lead.

–     None of the Top 5 cities perform strongly for more traditional news coverage, except Rome, but they benefit from huge amounts of user-generated content that tends to be more positive than for most other European cities. Rome is top for forums, the only platform London doesn’t lead.

–     Lyon’s digital visibility, which punched the most above its weight in the 2019 edition, is no longer driven by conversations around technology. Porto, which also leads the Top 5 for culture, now has the highest share for this category.

–     Porto, which has continued to gain profile, was noted in the previous survey for having far higher digital visibility than its global city ranking would suggest.

–     Lyon now has a comparatively higher share of conversations happening around sustainability, indicating the growing significance of this topic.

–     Manchester’s high talent share, as was the case in 2019, may be indicative of sustained population and jobs growth.

Valencia, a new entrant (like Porto) leads conversations for business.

Top 5 Cities with the Most Digital Profile Potential

Global city rankings highlight these as the cities we should pay attention to, but this doesn’t necessarily translate to the digital world, where these cities attract fewer mentions than their peers. These cities have the most potential to grow their digital profiles by leveraging their strengths more strategically. Cities that don’t are more likely to see a reduction in their visibility score in global city rankings.

–     Copenhagen, Stockholm and Helsinki all have raised numbers for sustainability, highlighting the Nordic region’s credentials. However, London and Paris have comparable shares to Copenhagen. As this topic becomes more mainstream, places with a strong history of sustainability may need to find new ways of differentiating.

–     Helsinki, which replaces Oslo, is the only city in this list that didn’t appear last year.

–     Warsaw continues to lead for culture and, with Zurich, has the highest share for technology.

–     Zurich, perhaps unsurprisingly, has the highest share for business. However, it also has one of the lowest digital conversation shares for culture, while other financial capitals have seen far greater divergence in conversation topics since last year’s edition.